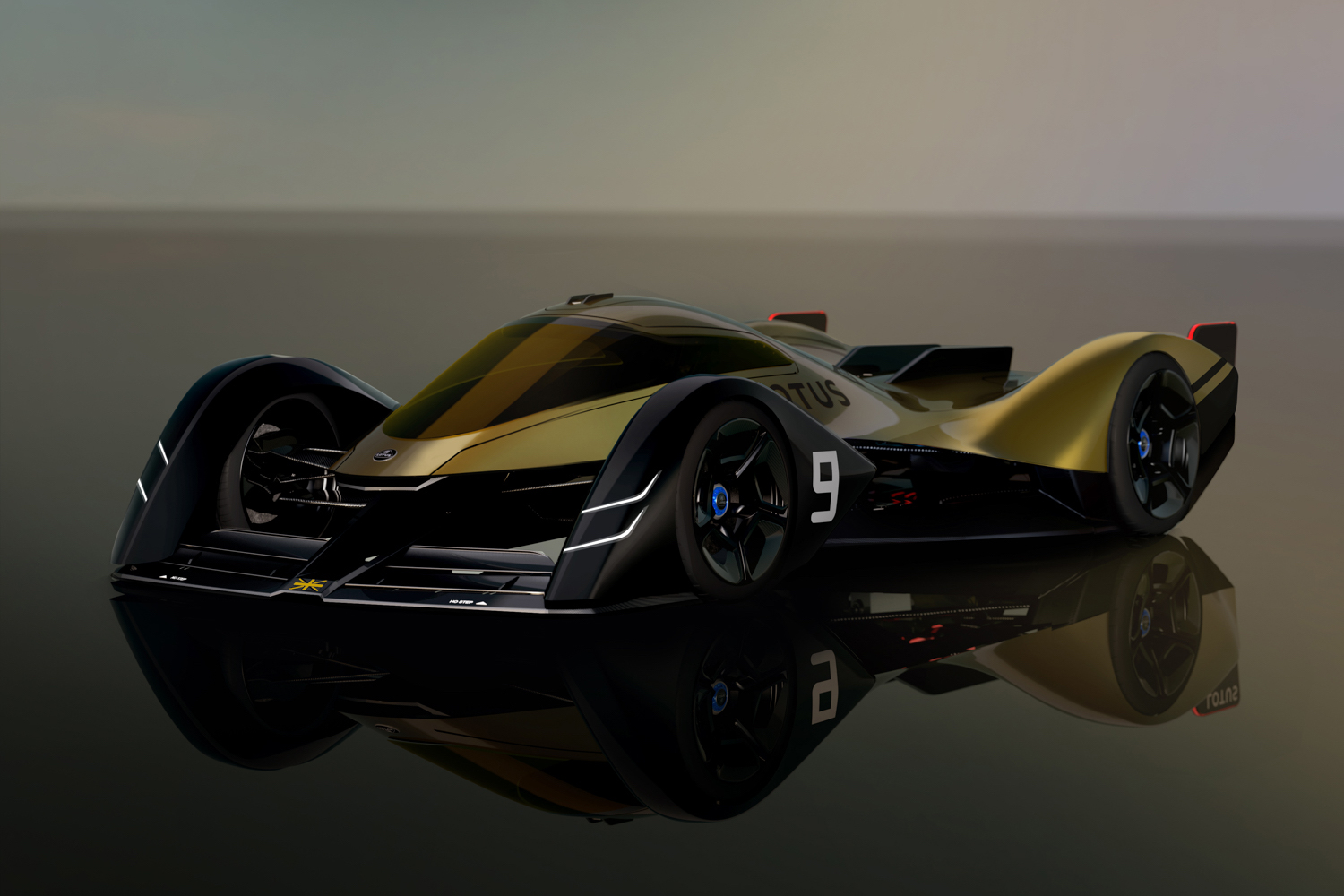 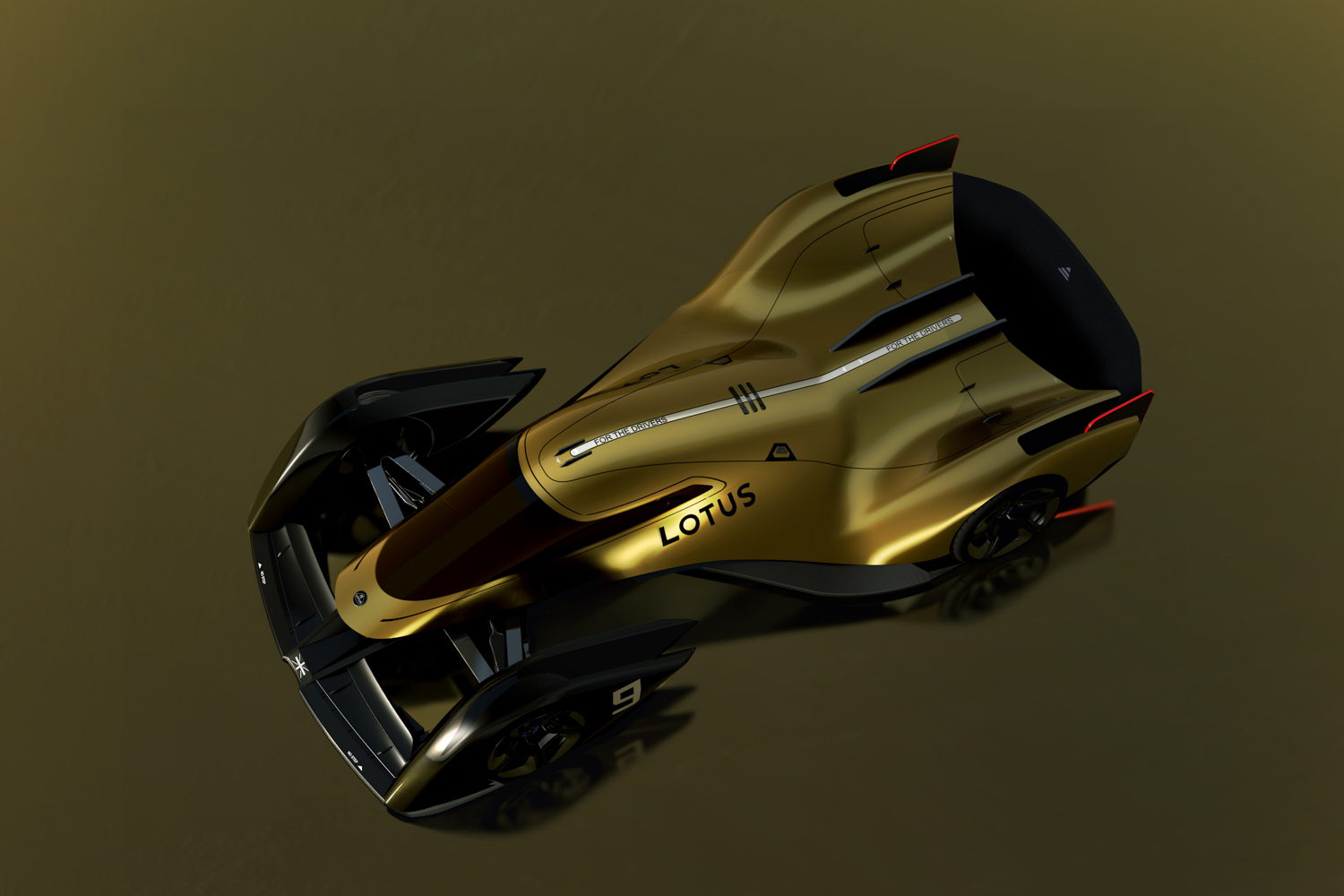 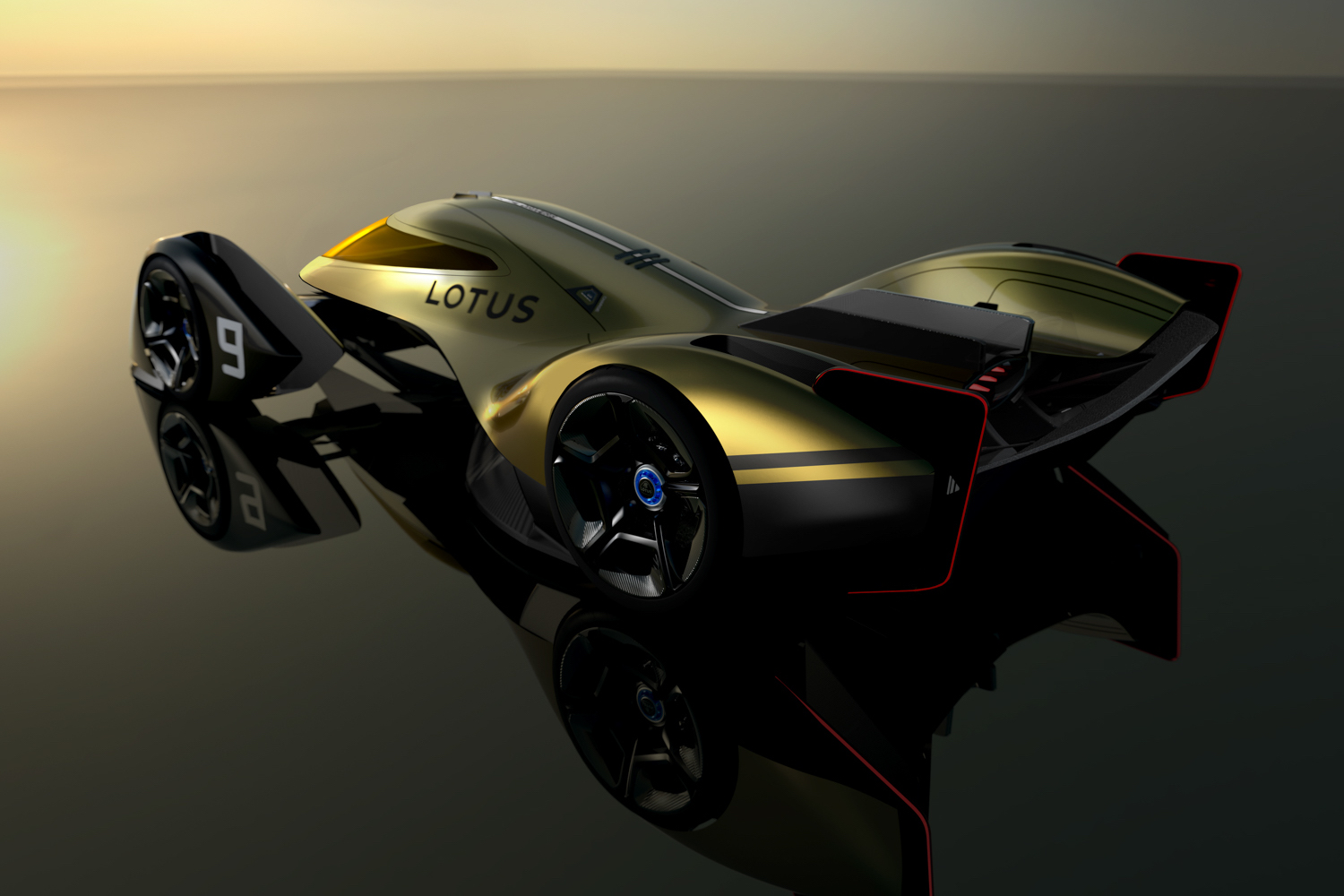 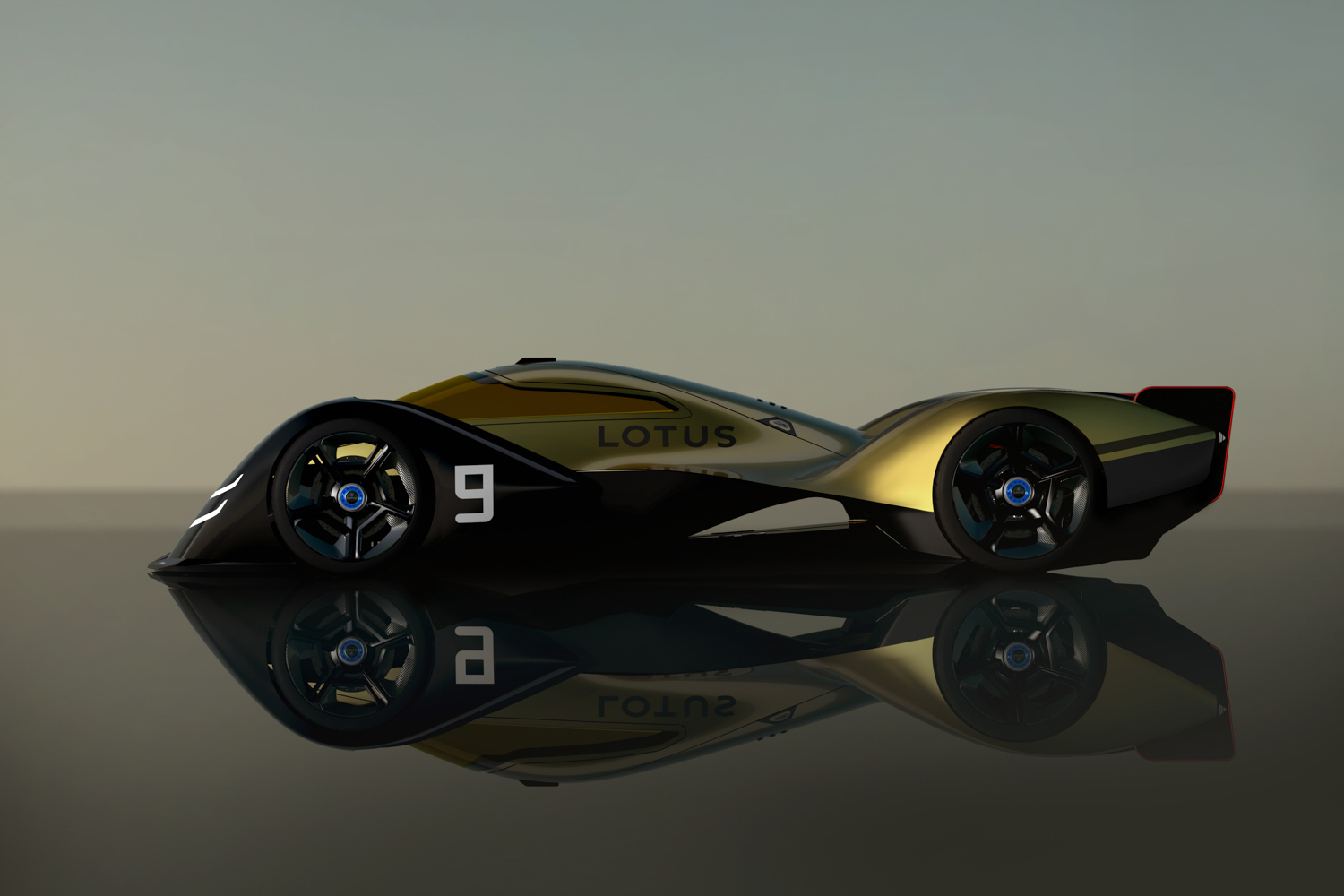 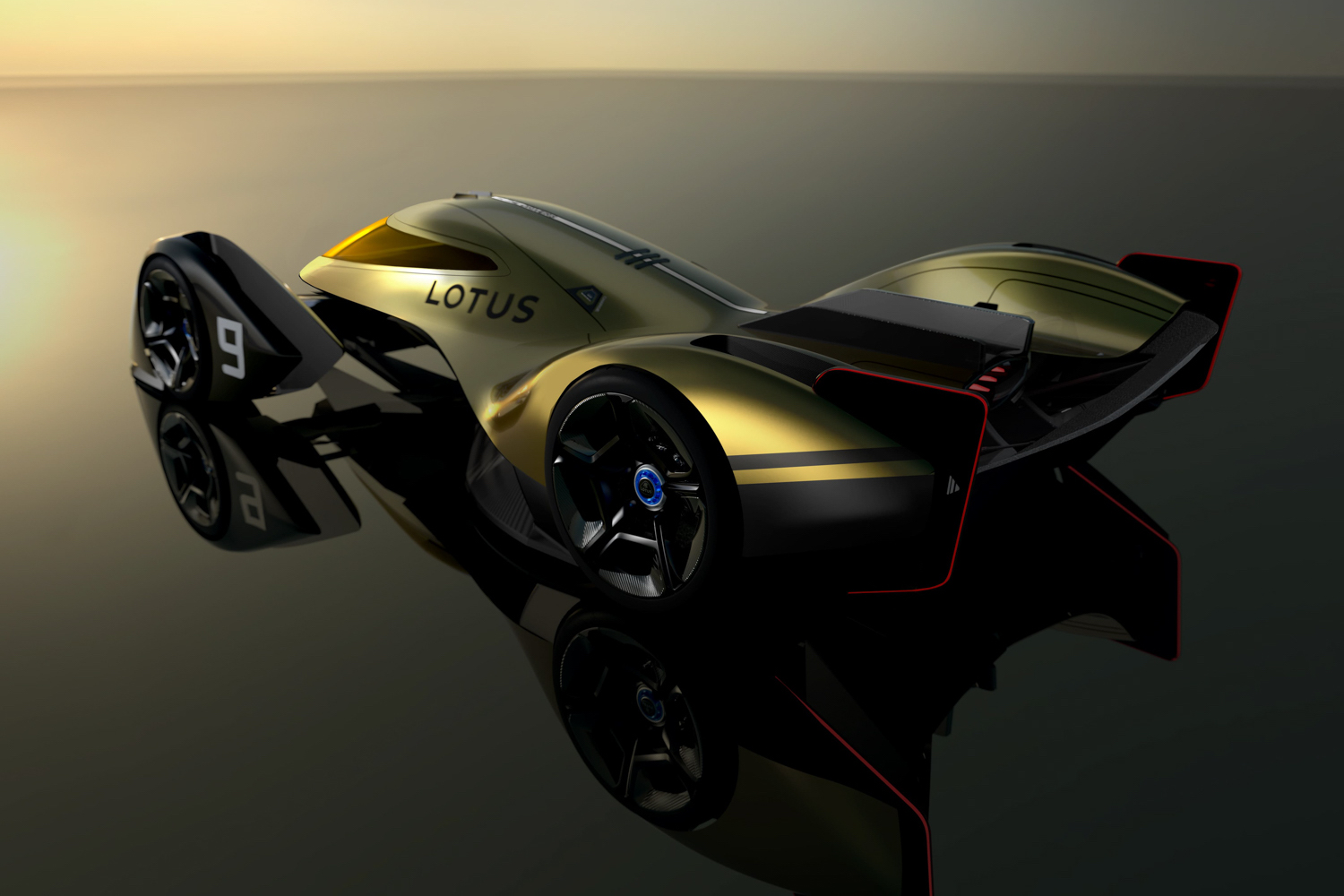 This is the Lotus E-R9, a design study from the British sports car manufacturer which previews the possible look of an all-electric endurance racer that could be in competition worldwide by 2030.

A mix of historical and high-tech

The E-R9 concept is finished in black and gold, a direct nod to Lotus' enviable history in F1 and its John Player Special livery, and has a centrally mounted fighter jet-style canopy mounted in an upper body that forms an aerodynamic delta-wing shape. Active aerodynamics with morphing body panels and vertically mounted control surfaces go further to assisting with high-speed cornering.

Lotus has called the concept the E-R9 for both obvious and heritage reasons. On the former score, the initials are fairly obvious: it stands for 'Endurance Racer'. But the '9' was chosen because it was in a Lotus Mark IX that the team made its debut appearance at the Le Mans 24 Hours in 1955, with company founder Colin Chapman among the drivers' team back then. Therefore, if the E-R9 does take the grid in 2030, it would be the 75th anniversary of the Mark IX's endurance debut.

The concept car has been developed by Lotus Engineering, the consultancy division of the company, which delivers projects for external clients. It was drawn up by Lotus' chief aerodynamicist, Richard Hill, alongside Louis Kerr, principal platform engineer on the incoming Evija hypercar and also GT technical director for the entire Geely Group Motorsports International outfit, and Russell Carr, Lotus' design director.

Mr Hill commented: "What we've tried to do is to push the boundaries of where we are technically today and extrapolate into the future. The Lotus E-R9 incorporates technologies which we fully expect to develop and be practical. Lotus has an amazing history of developing unique solutions, and we've done it many times in motorsport and with our road cars."

One of the main innovations with the aero are the morphing panels. These 'active' surfaces, located across the delta-wing profile, can change their shape and attitude to the airflow, either via the driver pressing a button or automatically according to performance sensor inputs. This would allow the E-R9 to deliver minimum drag on the straights and maximum downforce in the corners. Meanwhile, the vertical control surfaces at the rear would generate aerodynamic forces to help the car change direction, without relying purely on the limitations of grip at the tyres' contact patches. Lotus says the result is 'a racer that's partly driven like a car and partly flown like a fighter jet'.

Motor on each wheel

Lotus has fitted the E-R9 with an electric motor powering each wheel independently, allowing for enhanced torque-vectoring. It builds on technology already in the Evija, although in the E-R9 it would be fully adjustable by the driver on the move, and Mr Kerr added: "Battery energy density and power density are developing significantly year-on-year. Before 2030, we'll have mixed cell chemistry batteries that give the best of both worlds, as well as the ability to 'hot-swap' batteries during pitstops."