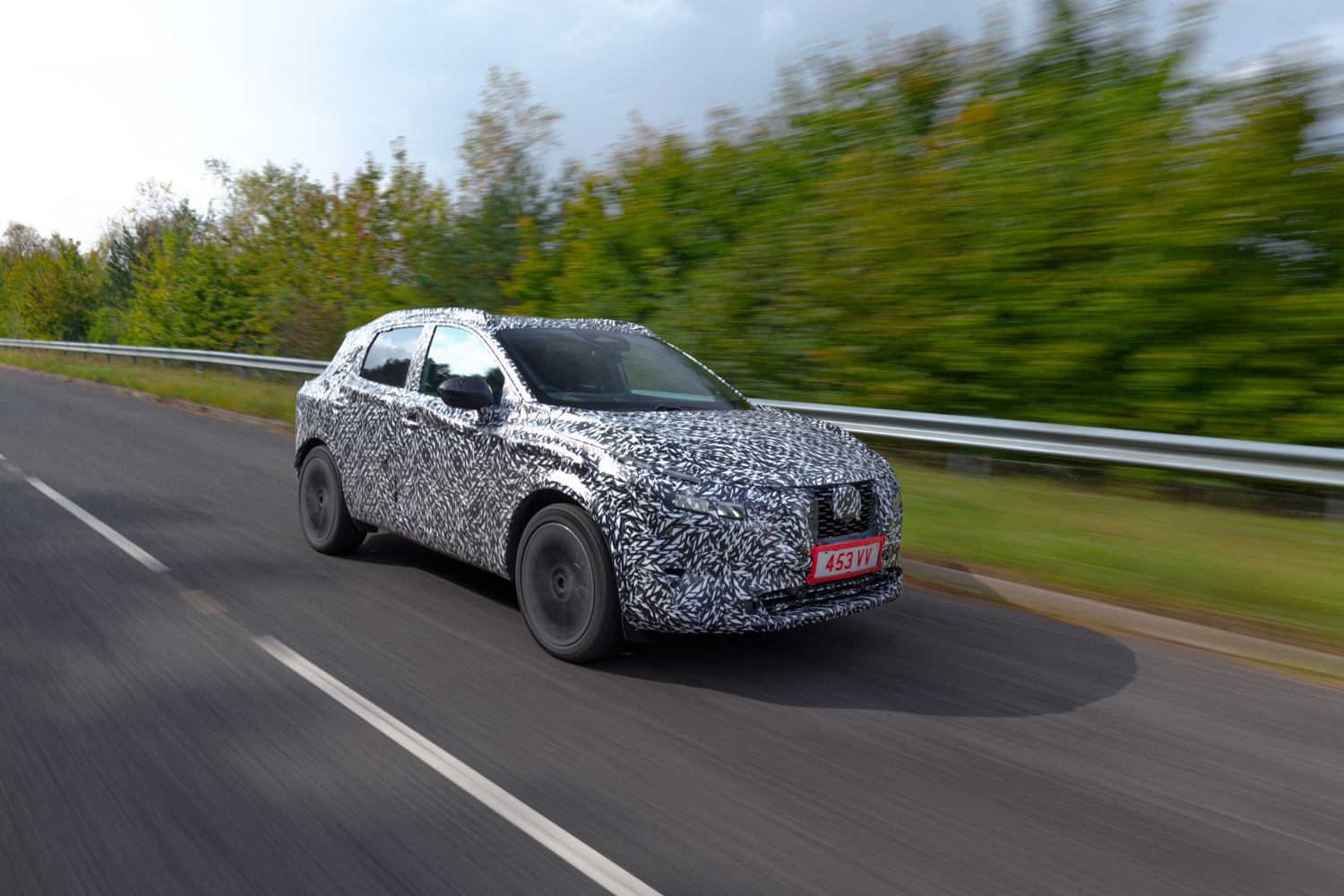 Mild-hybrid and half-electric e-Power versions of the new Nissan Qashqai.

The new Nissan Qashqai, a car more or less guaranteed to hit the top of the best sellers lists, is imminent and while Nissan isn't quite ready to show off the car in its entirety, it is letting us in on a few more of the Qashqai's technical secrets.

The biggest of which is the new e-Power version. Now, this isn't quite an electric version of the Qashqai, but equally, it kind of is. Basically, it's a range extender hybrid, but one that's never driven, directly, by its petrol engine. Instead, there's an electric motor and a small battery that drive the car, and that battery is kept topped up by a petrol engine.

That petrol engine can run at constant RPM, making it much more efficient than a conventional hybrid, at least in theory. As of today, we now know that the engine will be a 1.5-litre 157hp petrol engine (an upgrade on the existing, Japan-only Note e-Power, which uses a 1.2-litre engine) which will provide electrical power for a 140kW electric motor, giving the Qashqai e-Power a total 190hp at the wheels.

The Qashqai e-Power won't have an external charging socket - it takes all of its electrical energy from the engine, and from a regenerative braking system, but the engine will never directly power the wheels. By using an electric motor to do that, claims Nissan, it can offer the smoothness and refinement of an EV, with the convenience of a hybrid.

The Qashqai e-Power will have three driving modes; Standard, Sport and Eco, which are pretty self-explanatory, and it will use a development of the 'e-Pedal' regenerative braking system from the Leaf EV, which will slow the car down using the drag of the electric motor, and only bringing in the physical, hydraulic brakes when needed. It will allow the Qashqai e-Power to be driven in 'one-pedal' mode most of the time.

Nissan reckons that the e-Power has baked-in success on its side. Since the older, simpler system was introduced in Japan in the Note and Serena models, 70 per cent of Note buyers have gone for e-Power models, while 50 per cent of Serena buyers have done so.

The Qashqai will also come with a more conventional engine option than e-Power. That'll be the 1.3 DIG-T petrol mild-hybrid. This engine, shared with Renault and Mercedes, will come in 140hp and 158hp forms and uses a new compact battery setup which Nissan calls ALiS (Advanced Lithium-ion battery System). It's only a 12-volt system, compared to some rival 48-volt setups, but that will bring some benefits in terms of weight and simplicity. Indeed, the ALiS system adds just 22kg to the Qashqai's kerb weight.

As with most mild-hybrid systems, the Qashqai's is essentially a stop-start system with bells on. If you order yours with the optional CVT automatic gearbox (which comes as standard on the higher-power engine), when braking to a stop, the ALiS system will cut the engine once you drop below 18km/h, and will trigger engine re-start faster and with less vibration when you're ready to move again. There's also a little bit of a power boost under acceleration - at speeds between 20km/h and 110km/h, the mild-hybrid pack can add an extra 6Nm of torque for up to 20 seconds of acceleration. Not much, but every little helps.

The 1.3 DIG-T engine is familiar from the outgoing Qashqai, but it has been significantly upgraded, with 50 per cent new components (including a new turbo, new injection system, a particulate filter, and reduced friction between parts) while the manual gearbox has been improved with a sportier, more direct shift action. There's also an optional four-wheel drive system for 158hp versions, and 4WD models get five driving modes - Standard, ECO, Sport, Snow and Off-Road.

"Since 2007, when it invented the segment, the new Qashqai has always set the standard in the crossover segment. With the third generation Qashqai, new and existing customers are going to love the innovative powertrain options available to them. Our offer is simple and innovative, with both powertrain options being efficient, but still fun to drive. Our approach to the new electrified Qashqai has been without compromise and that is clearly evident with both the 1.3 petrol, with mild hybrid technology and the unique e-Power option," said Matthew Wright, Vice President, Powertrain Design and Development, Nissan Technical Centre Europe.

"Customers rightly demand more efficient vehicles, but they also want an enjoyable driving experience. Electric vehicles have the highest satisfaction for driving sensations and customers love the instant torque and continuous acceleration they deliver. By adopting 100 per cent electric motor drive with e-POWER on the new electrified Qashqai, customers can enjoy the benefits of EV driving, without the consideration of range or access to charging infrastructure," said Marco Fioravanti, Vice President, Product Planning, Nissan Automotive Europe.