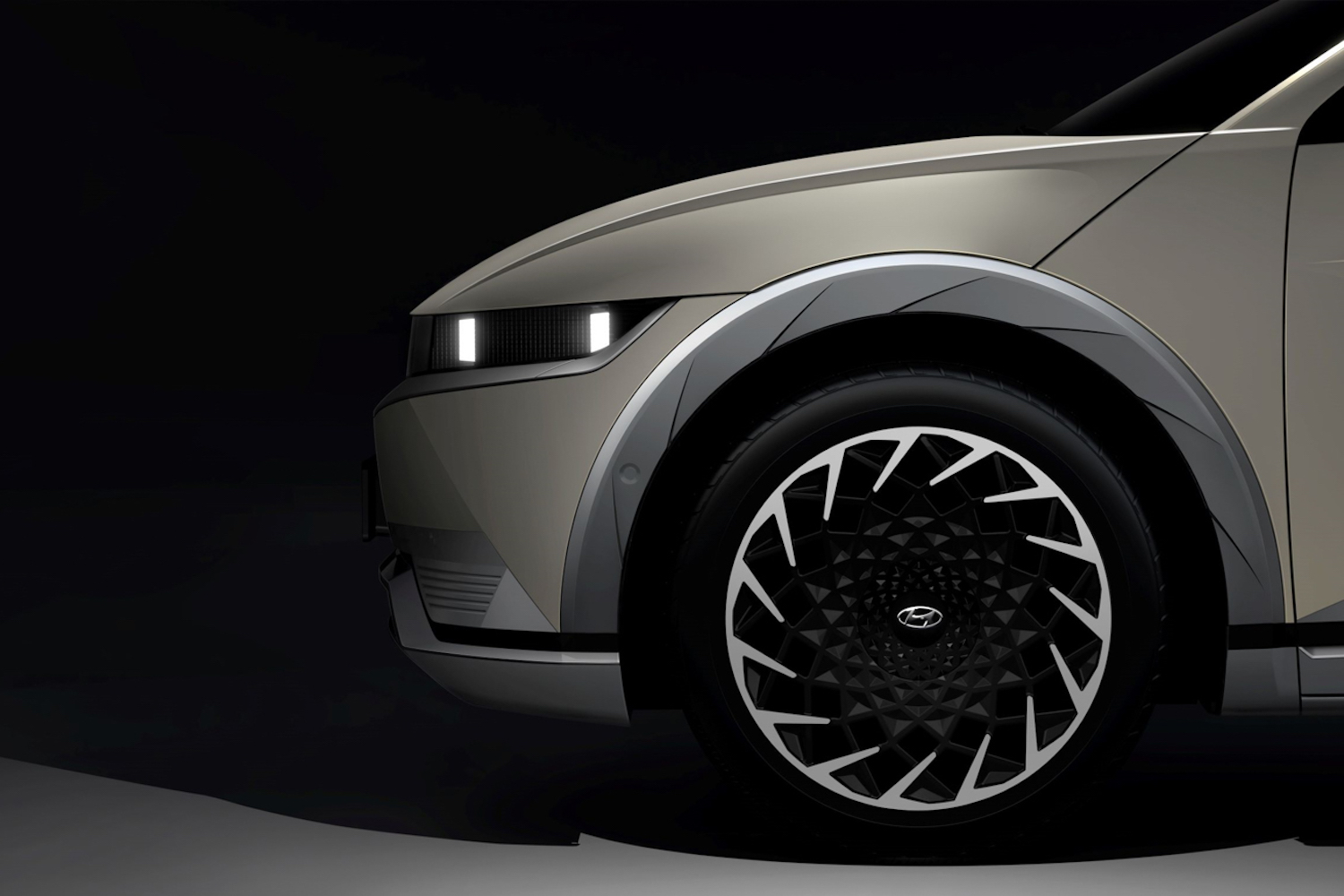 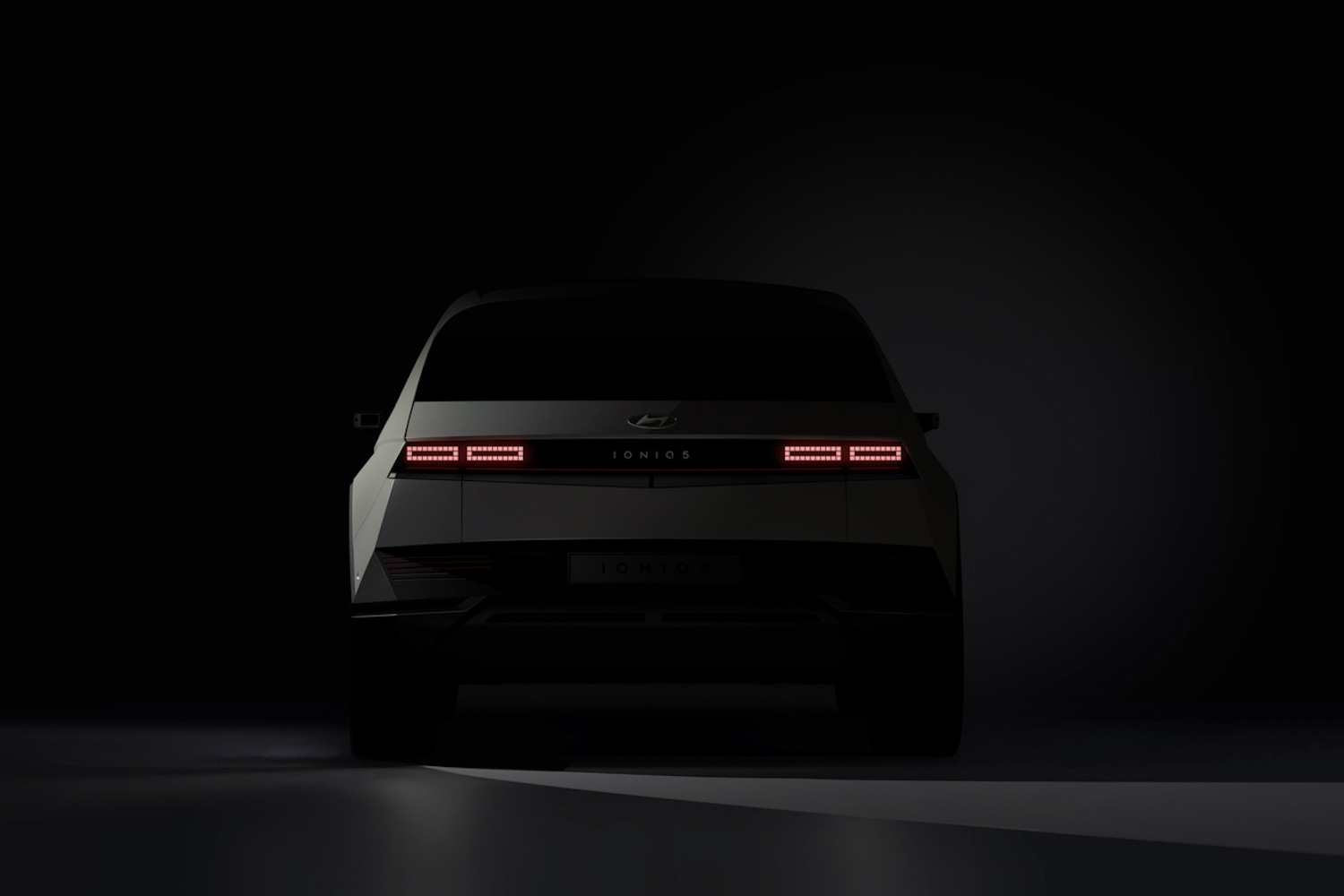 Hyundai is giving us a first glimpse at the production version of the Ioniq 5. The 5 will be the first new model from Hyundai's all-electric sub-brand, which takes its name from the successful, Nissan-Leaf-rivalling Ioniq hatchback.

As you can clearly see, the news on the styling front is mostly good. Hyundai looks to have retained the overall silhouette and detailing of the gorgeous, retro-70s 45 Concept, which was shown at the Frankfurt Motor Show in 2019 (remember motor shows? Ah, the good old days...). The angular styling and deeply-inset headlights remain, as does just a faint hint of 1970s Austin Princess (although Hyundai would probably say that the Ioniq 5's wedge-y profile owes more to the original Hyundai Pony hatchback).

If there is a sense of disappointment, it's that Hyundai has clearly nudged the styling more towards the SUV-end of things. The edges of the wheelarchs now seem to have Audi-Allroad-alike protection, while the bonnet and front end have become rather higher and more curved, with less of that fabulous Giugiaro-style angular look. The headlights are designed to be hidden when switched off, rather as with the new Tucson, while the huge bonnet is a one-piece clamshell, to cut down on shutlines and give the Ioniq 5 a cleaner look. The wheels are massive 20-inch rims, the largest wheels yet fitted to a Hyundai electric model.

More important than the styling though is the fact that the Ioniq 5 will be the first production model to use Hyundai's new Electric-Global Modular Platform (E-GMP), a dedicated EV platform designed to compete with Volkswagen's MEB setup, and which can be fitted with sufficient battery capacity to allow for a 500km one-charge range.

"Ioniq 5 presents an all-new customer experience through innovative EV design that is evocative of the icon that established Hyundai's design DNA," said SangYup Lee, Senior Vice President and Head of Hyundai Global Design Center. "Beginning with Ioniq 5, our dedicated BEV lineup brand will redefine the relationship between people and their cars, establishing a new standard against which all BEV design experiences will be measured."

To help gin up some interest in the new model, Hyundai has released a couple of teaser videos, which show off some of the capabilities of the Ioniq 5. In one, a happy Ioniq 5 driver is seen at a campsite, roasting a turkey, listening to tunes, and jogging on a treadmill, all of which are plugged into the Ioniq 5's Vehicle To Load external socket. In a second video, the Ioniq 5 shows off its rapid-charging ability. Hyundai reckons that from a high-speed charging point (it doesn't sepcify quite how fast, but we're assuming that being as Hyundai is now part of the IONITY charging consortium, it's a 350kW charger) the 5 can inhale enough charge in five minutes to travel for 100km. So, Hyundai decided, for the video, to charge four things for five minutes - a smartphone, a laptop, and an 'action camera' (like a GoPro, but not branded as such) as well as the Ioniq 5 and see which lasted the longest.