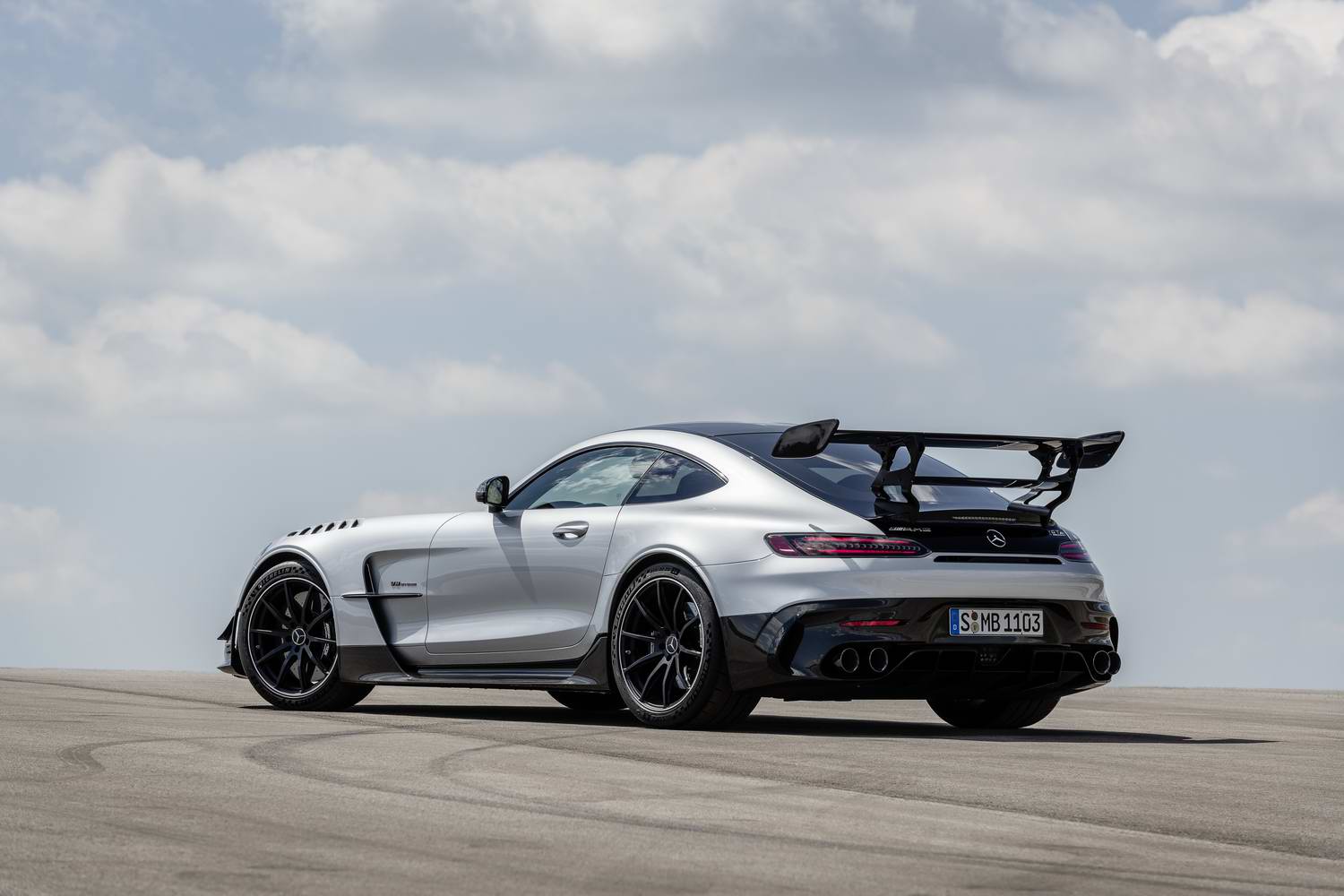 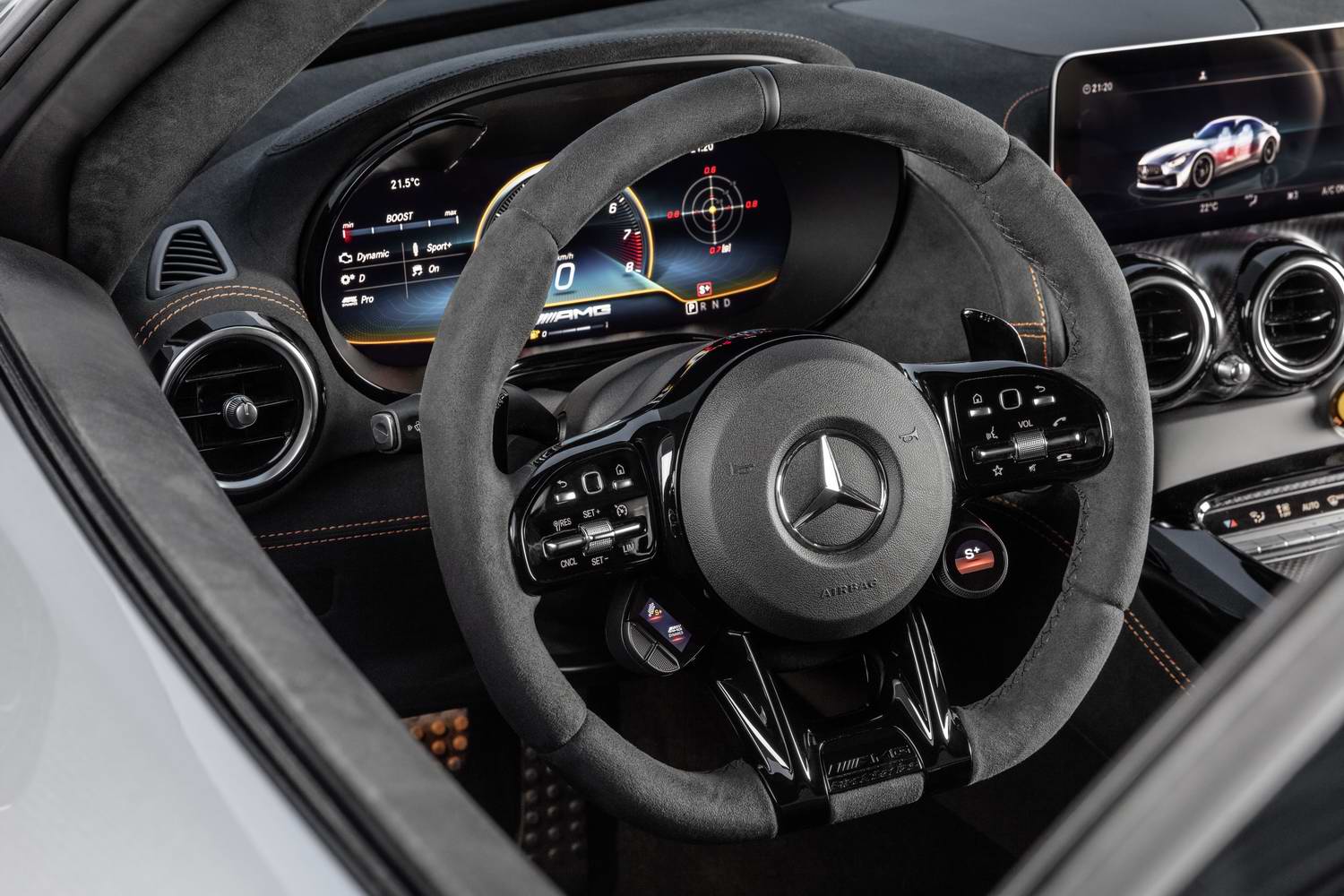 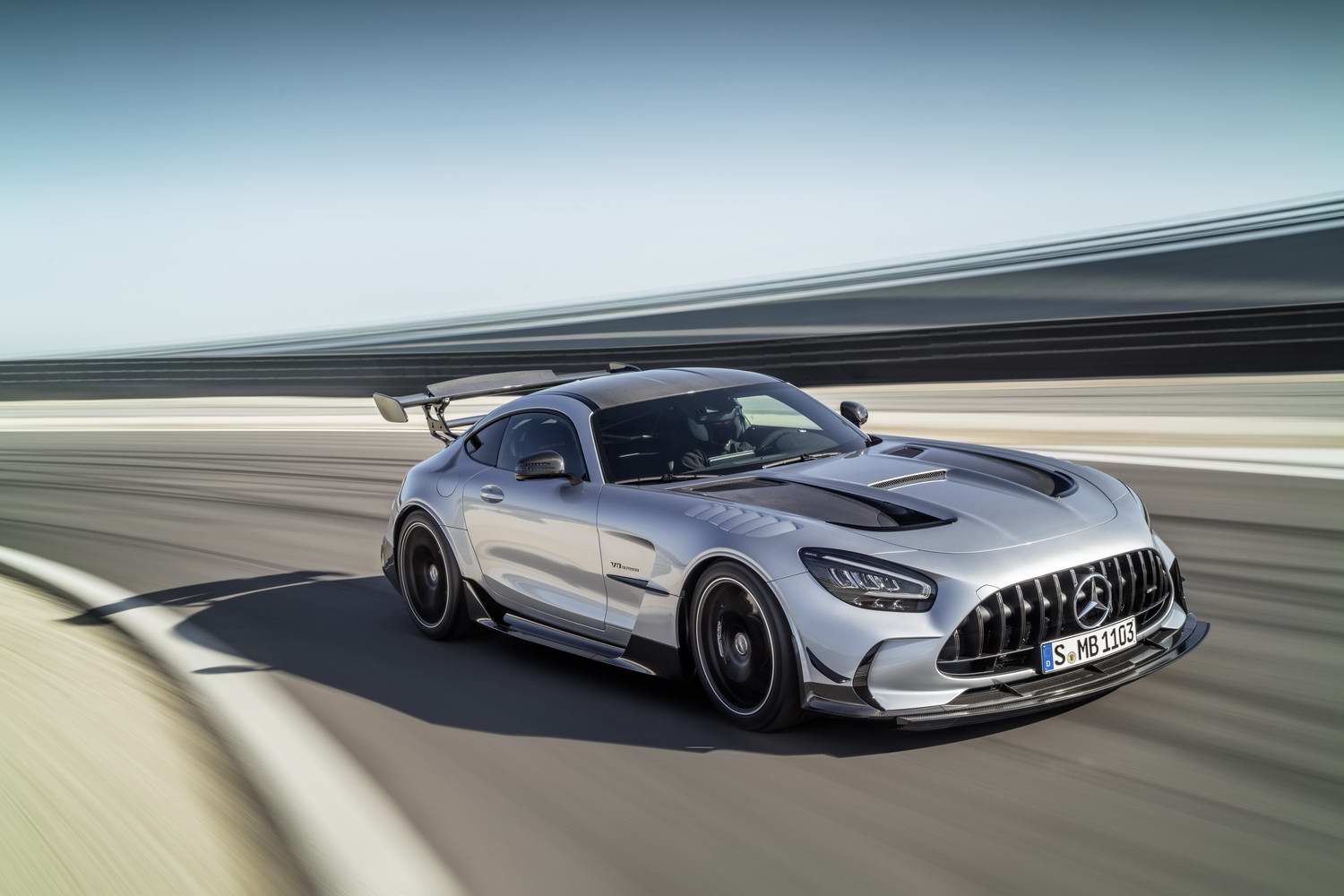 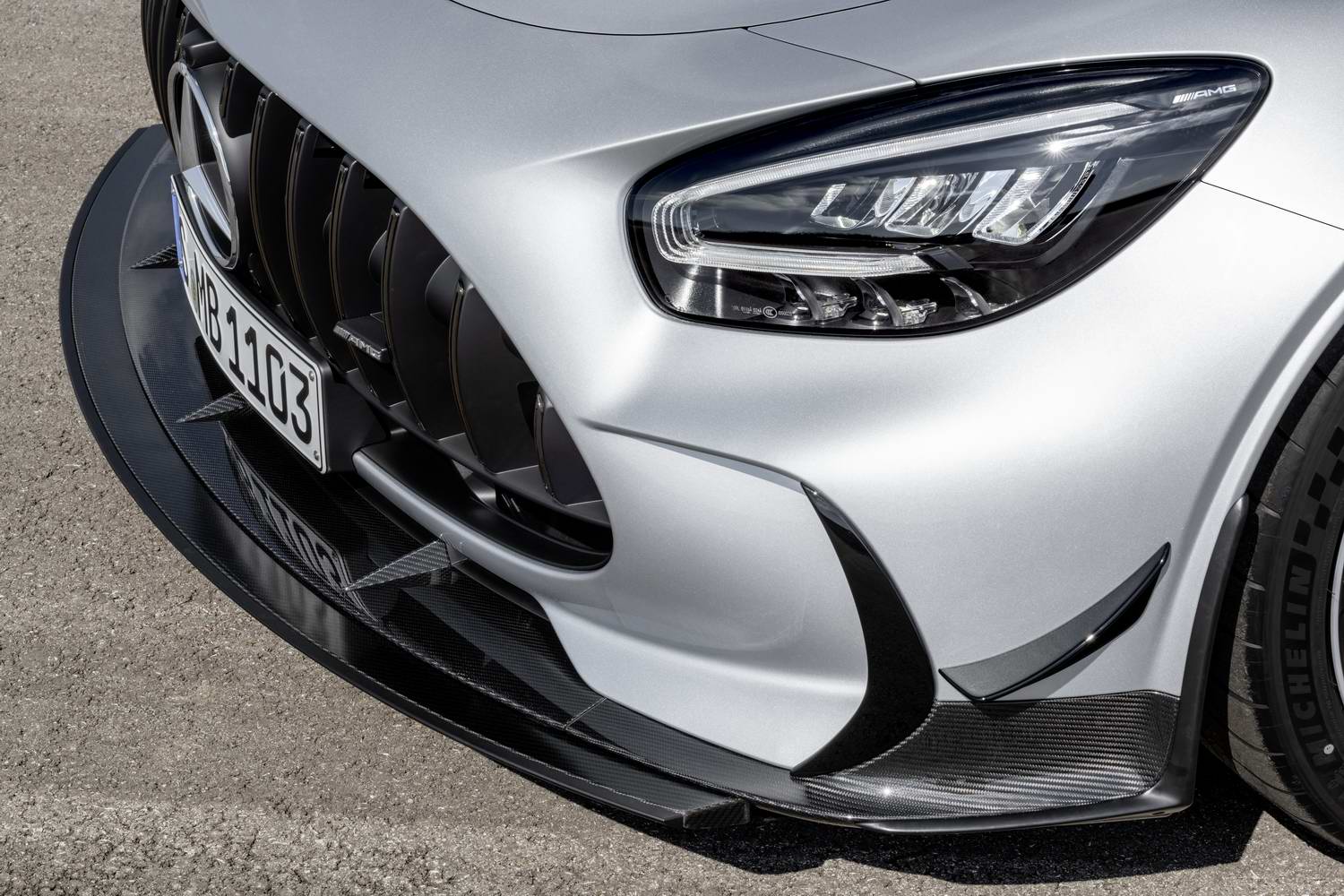 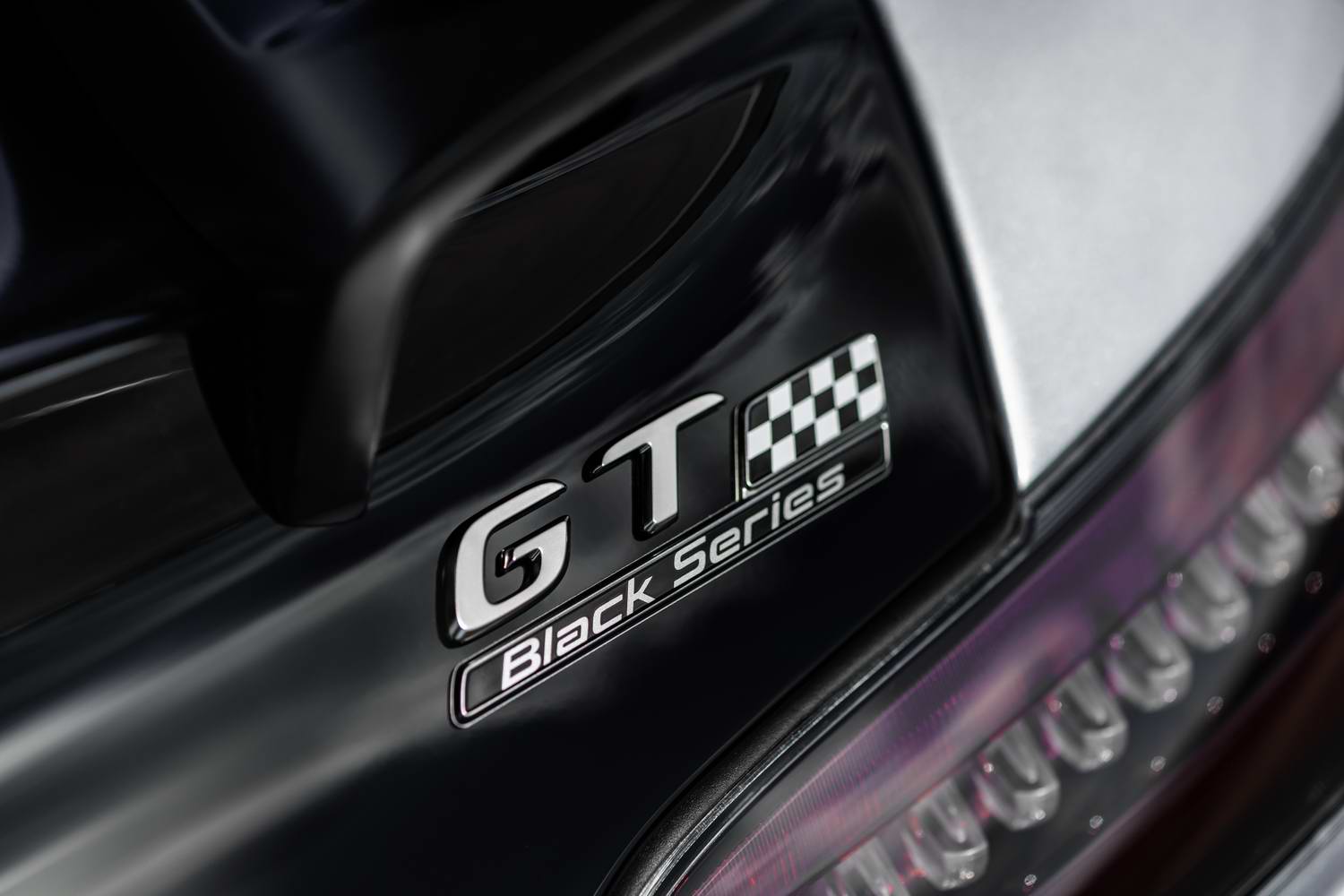 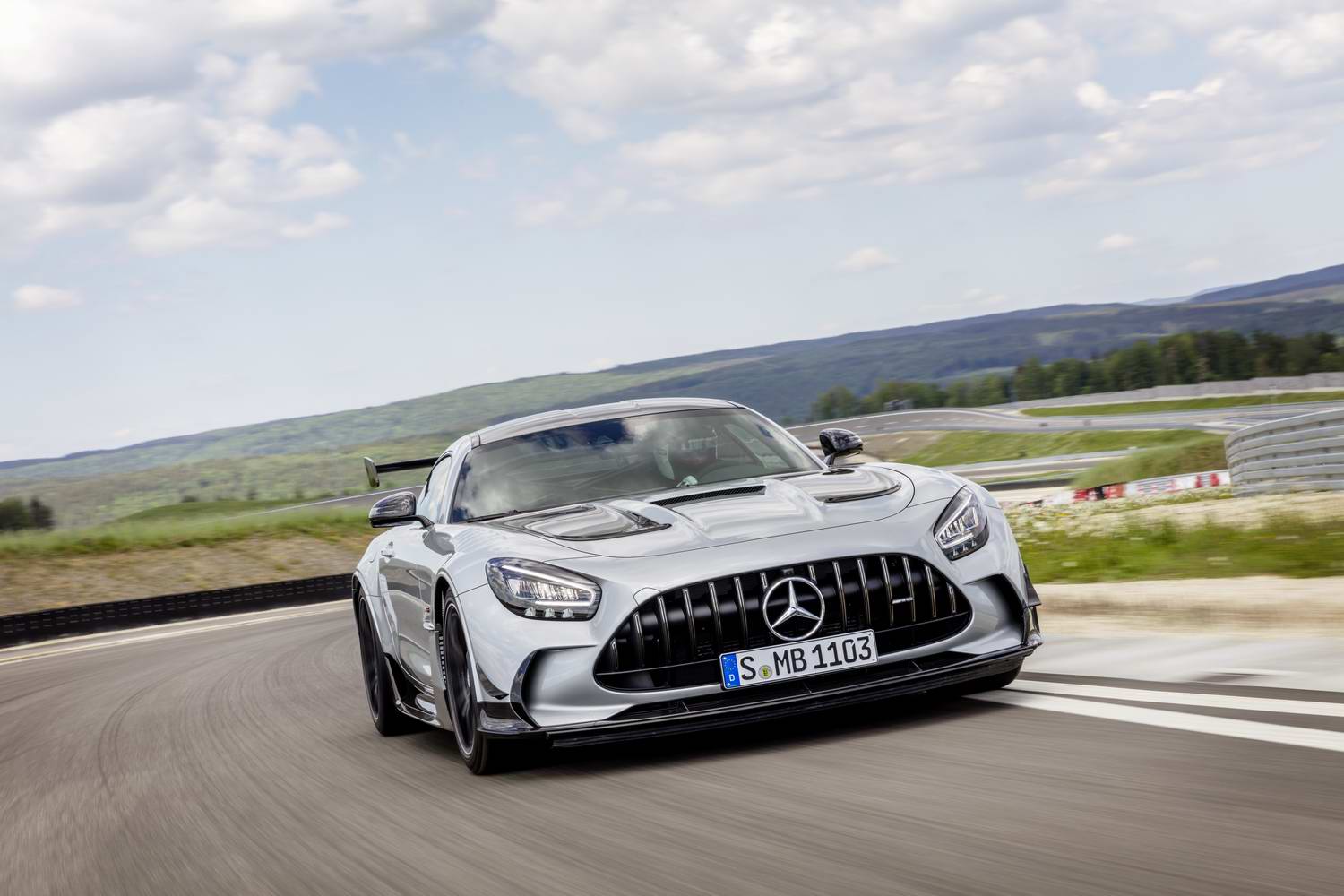 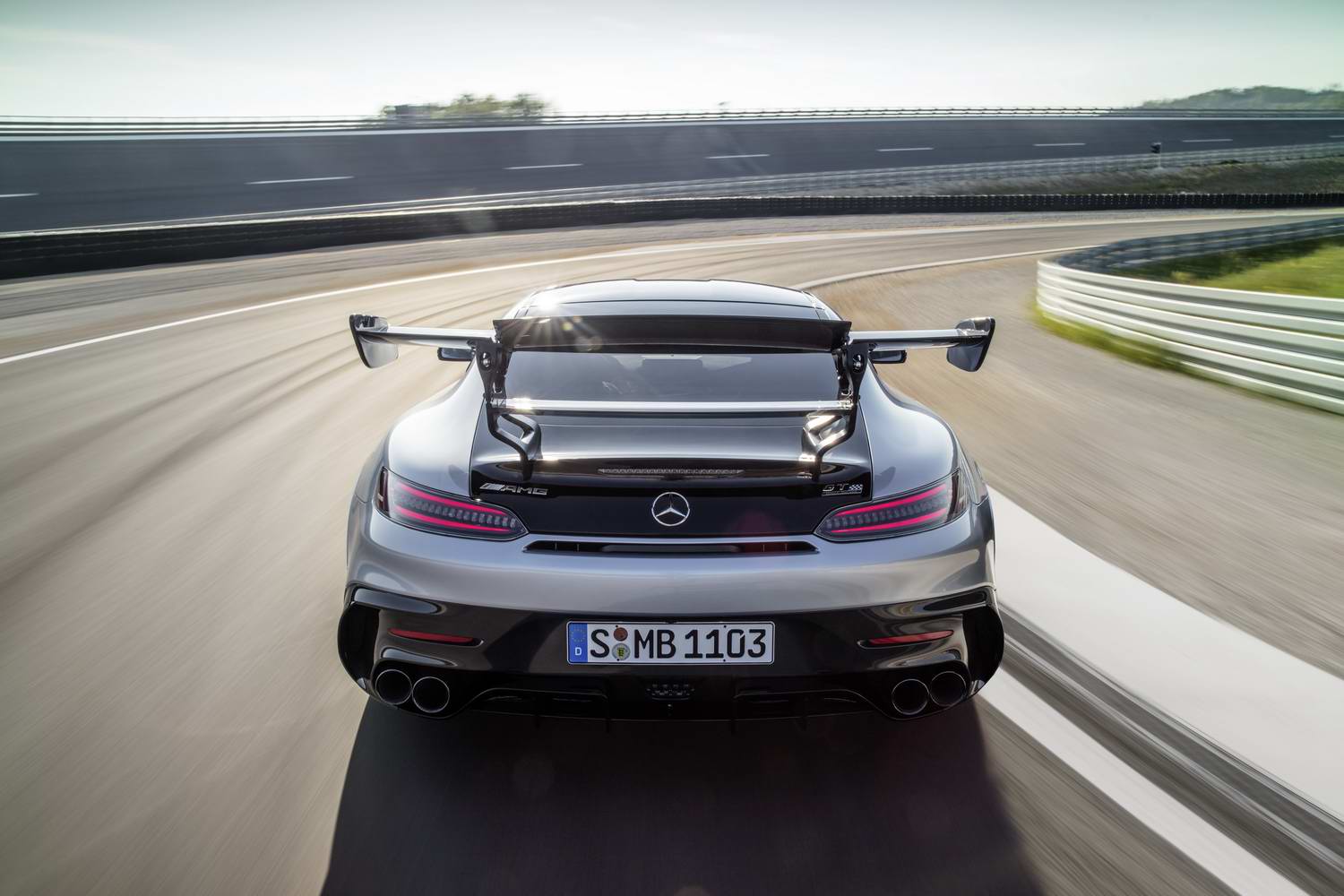 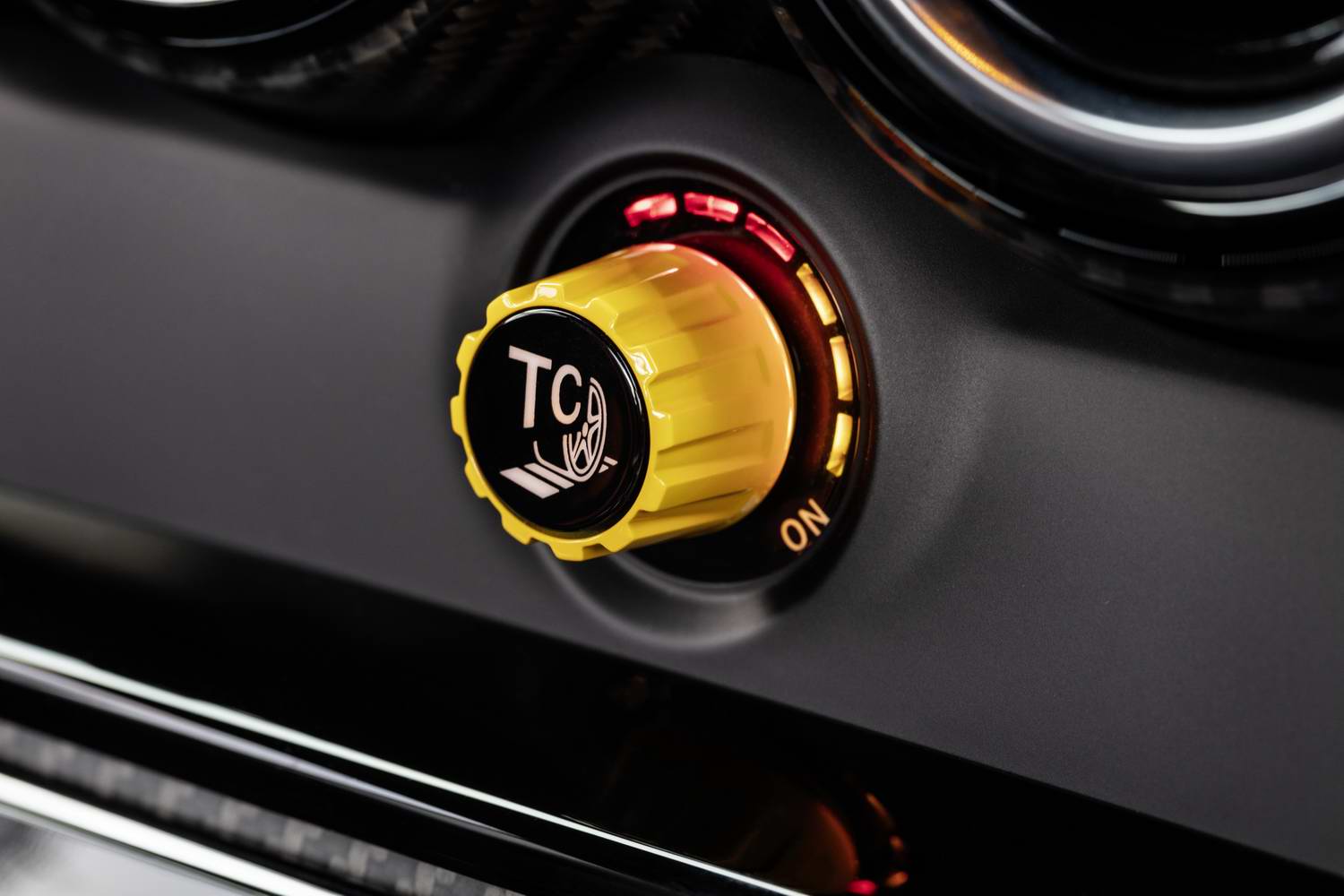 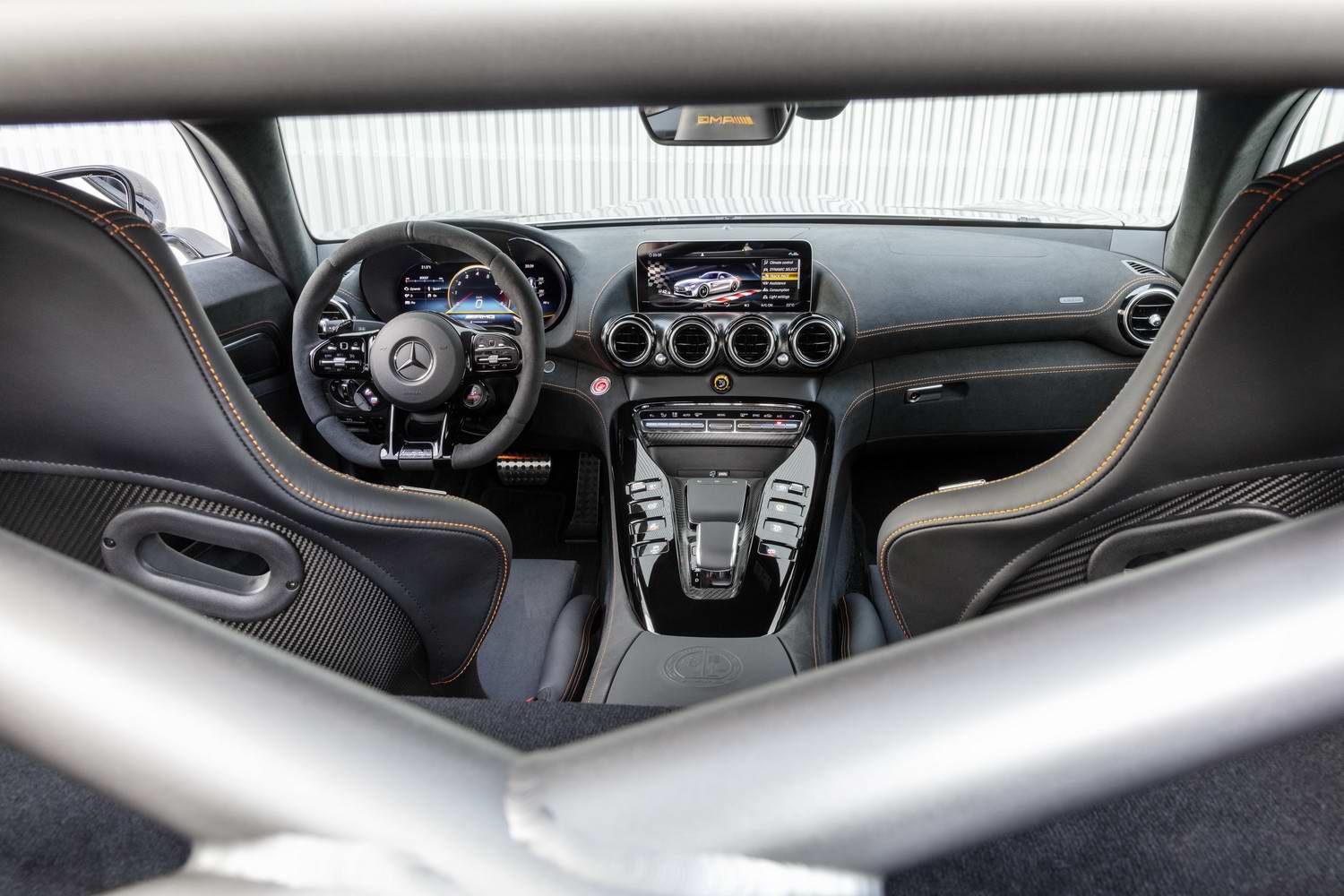 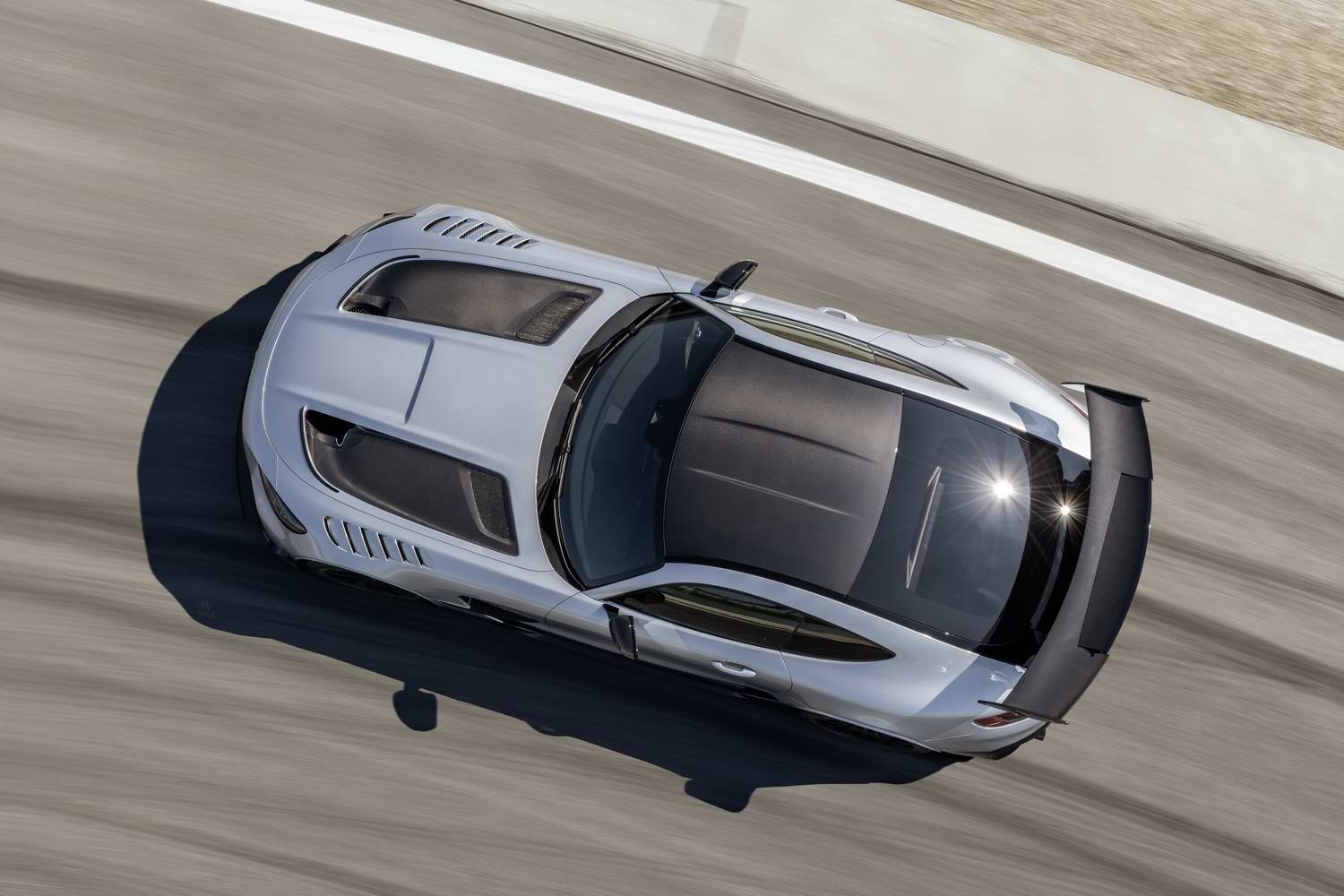 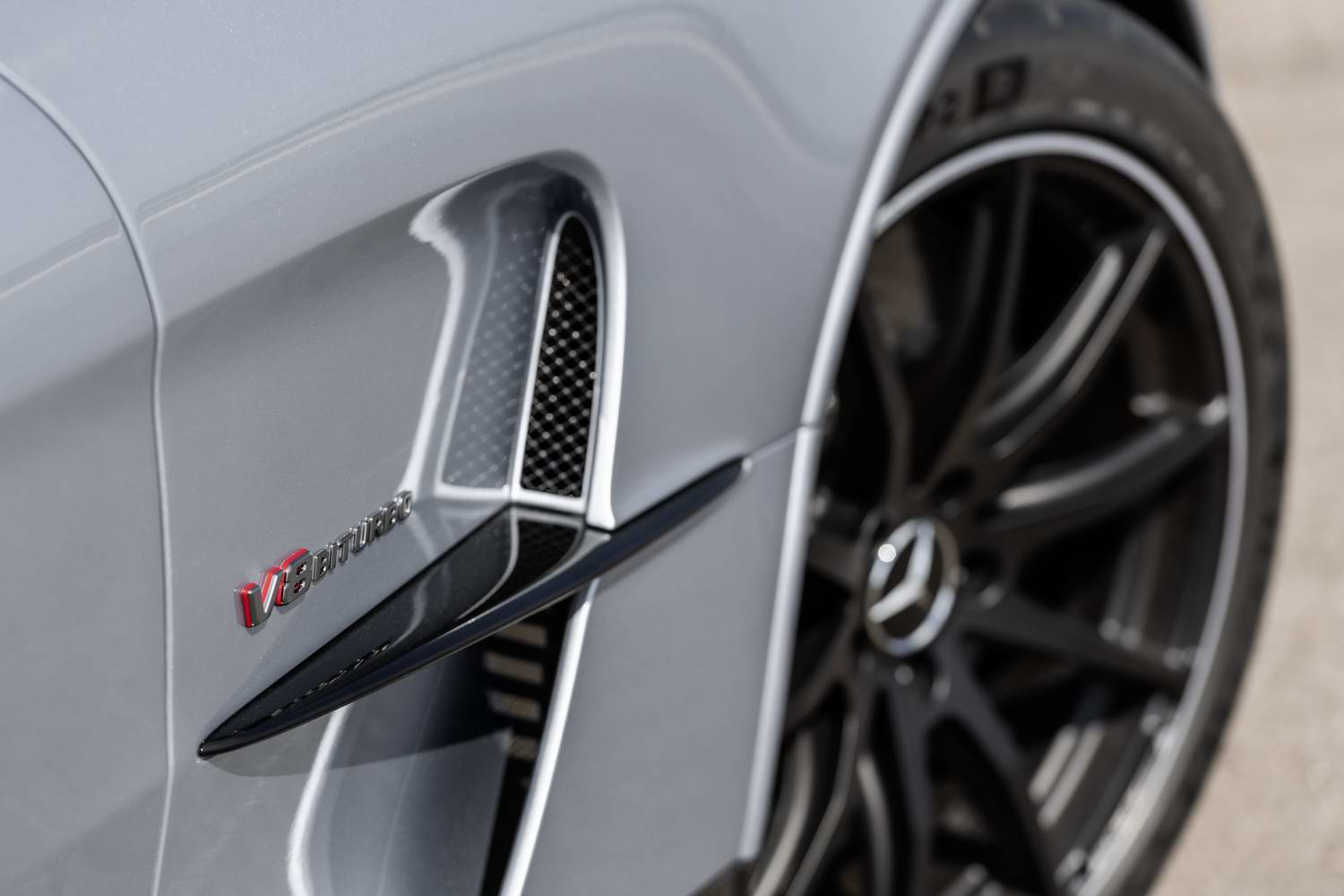 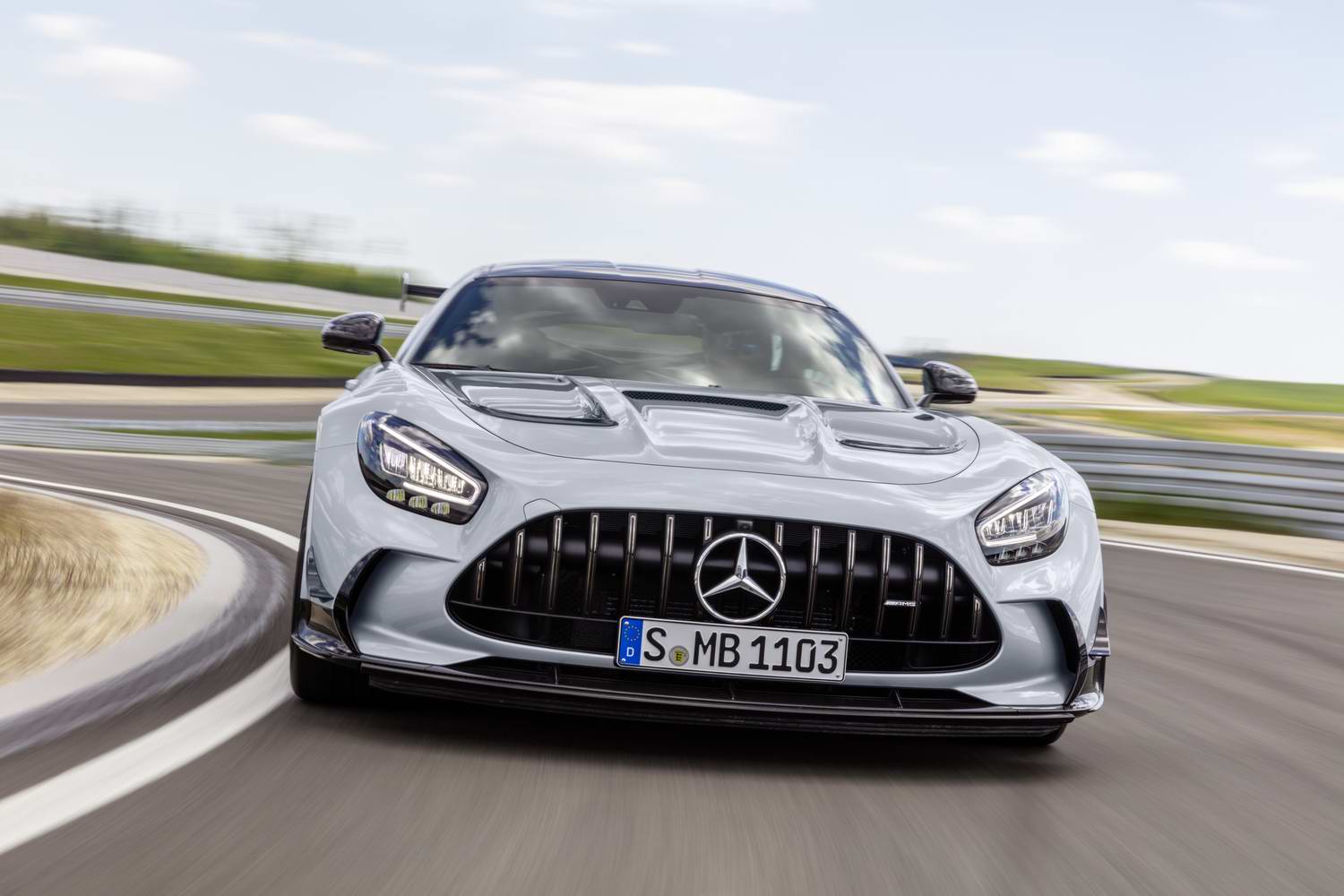 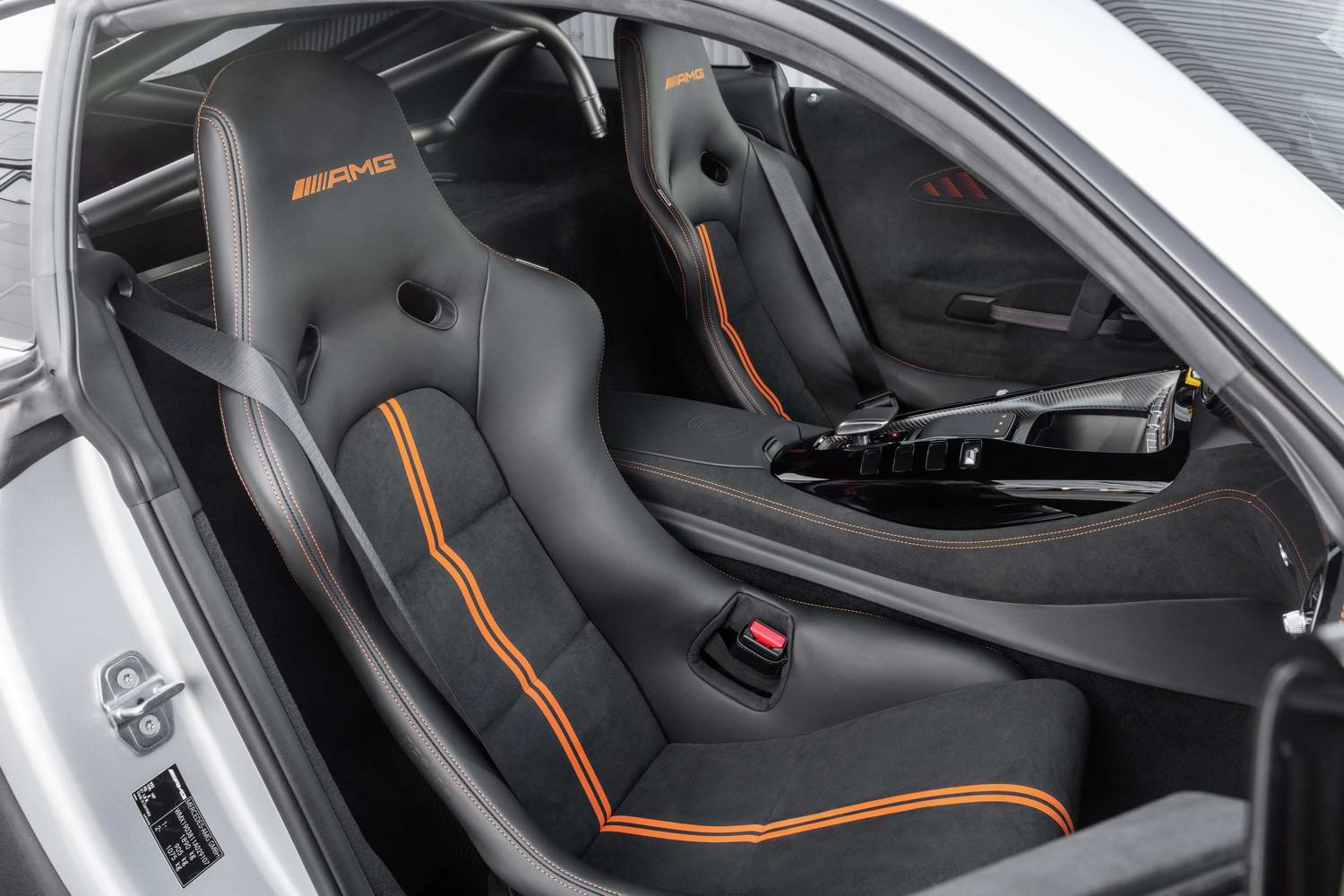 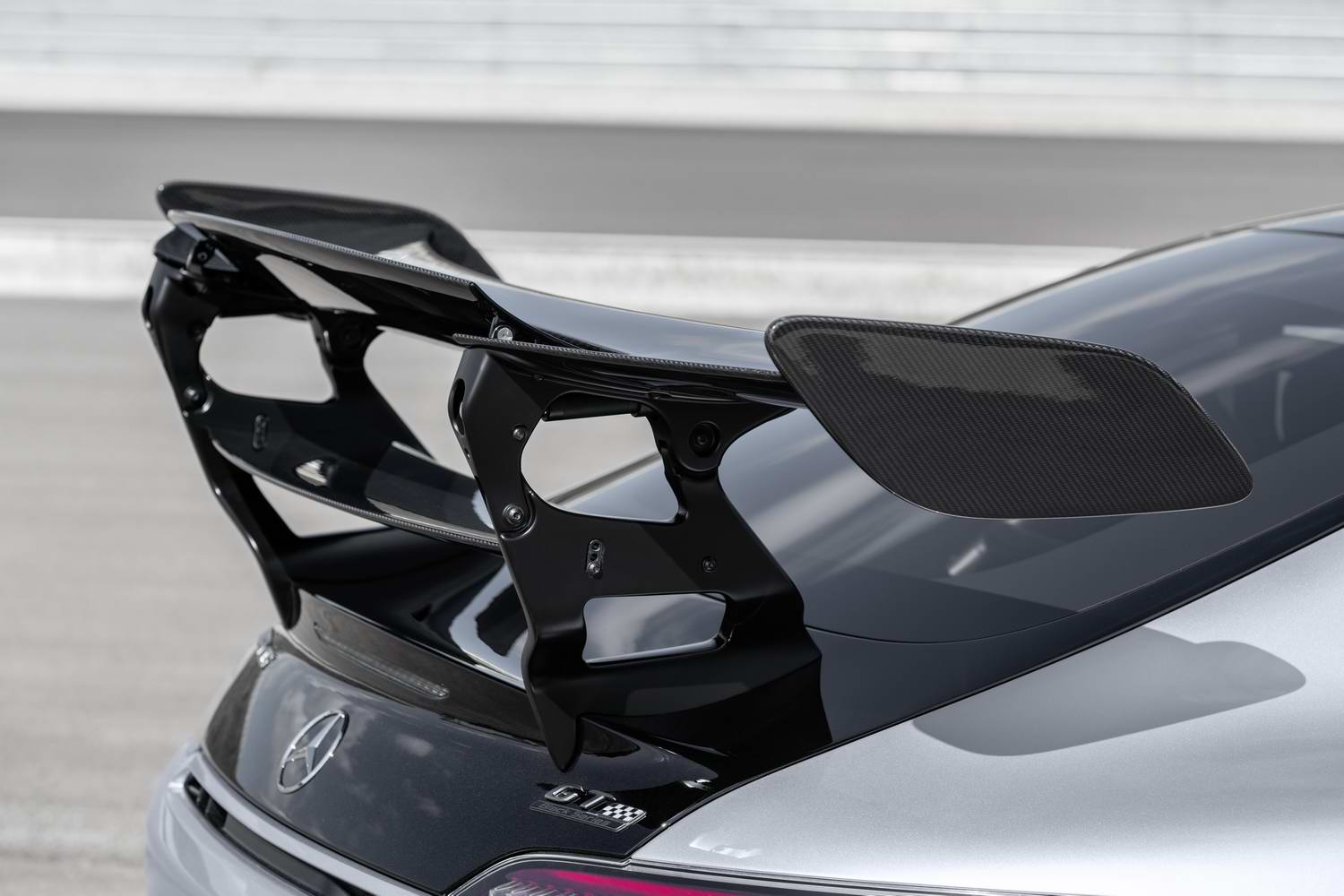 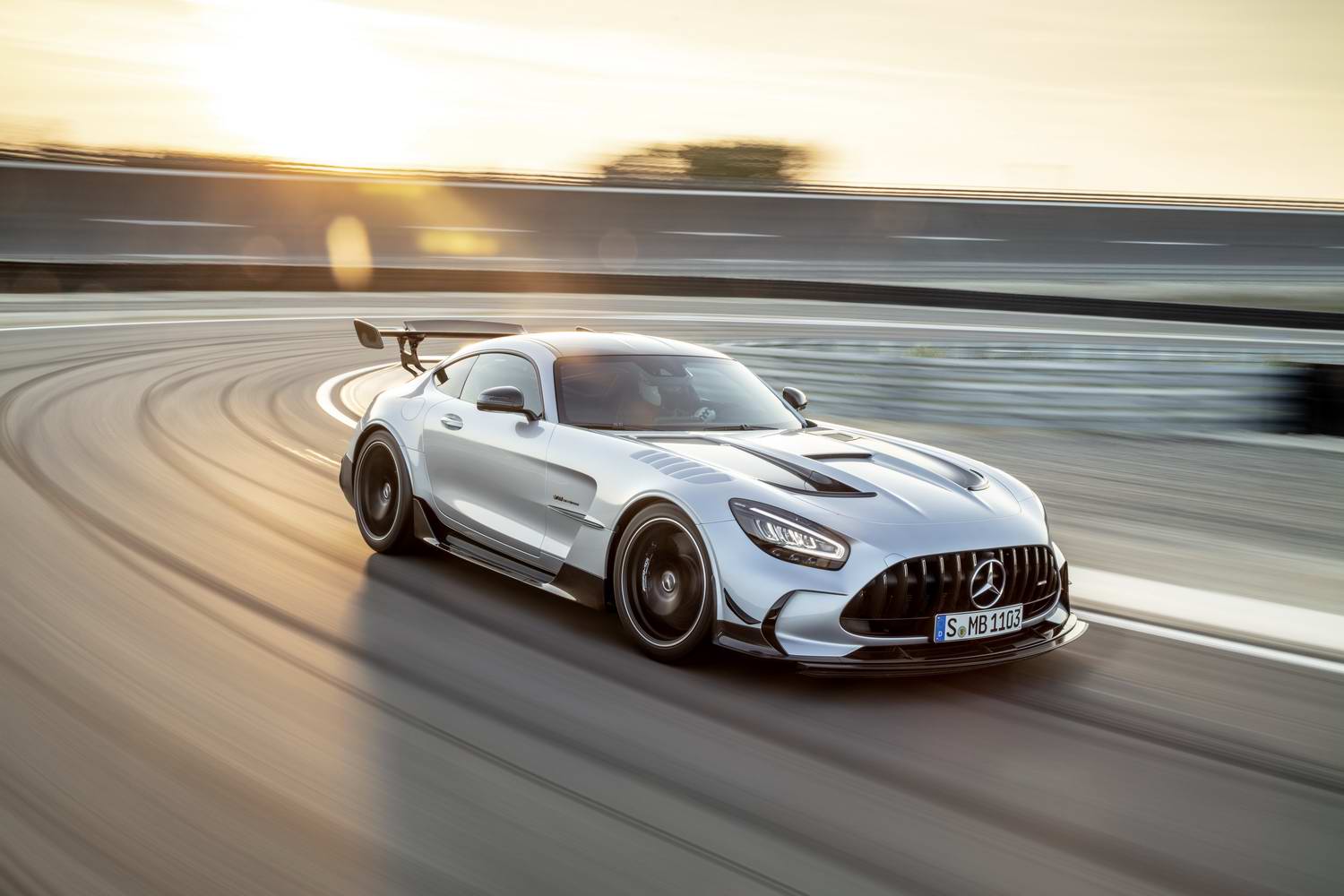 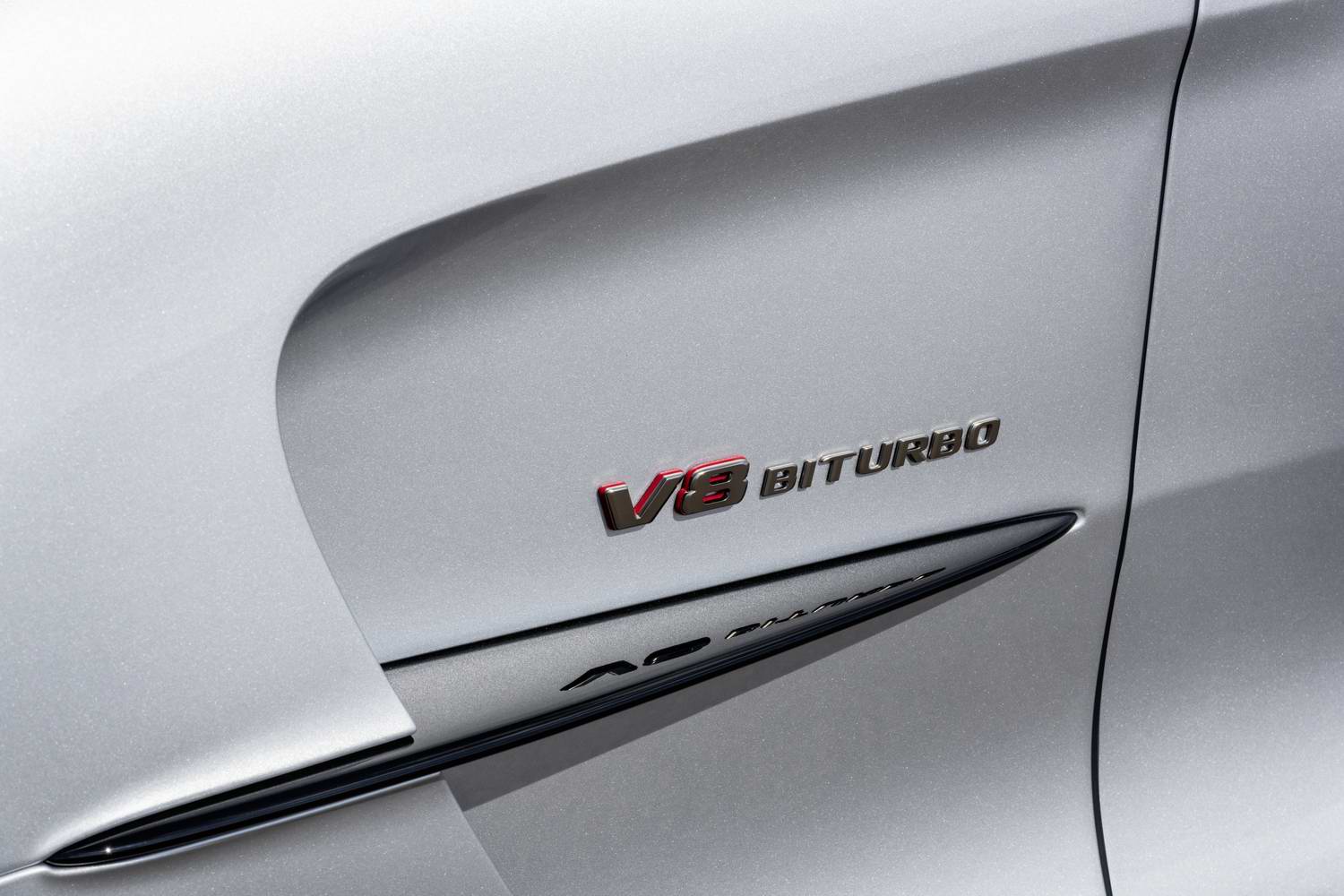 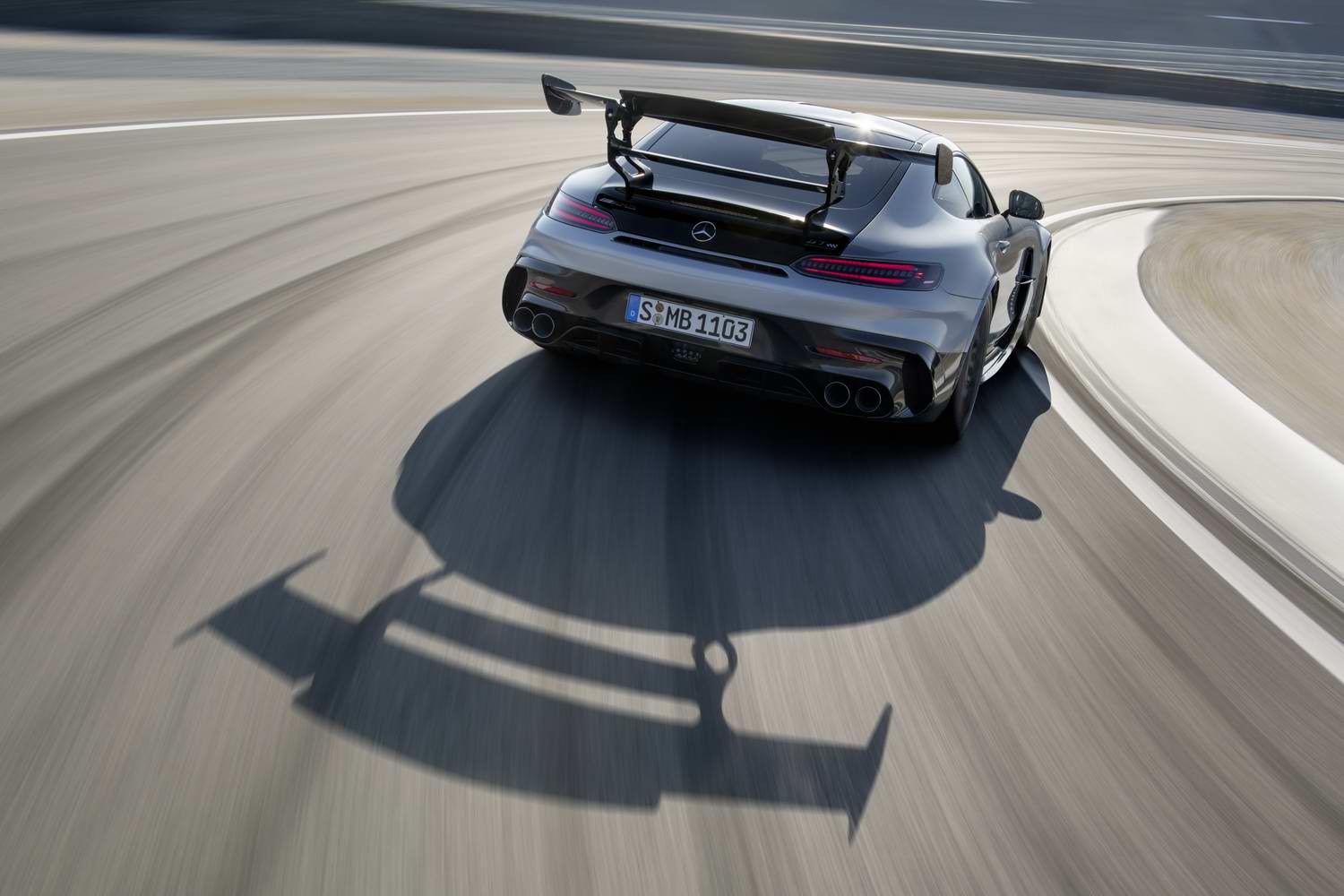 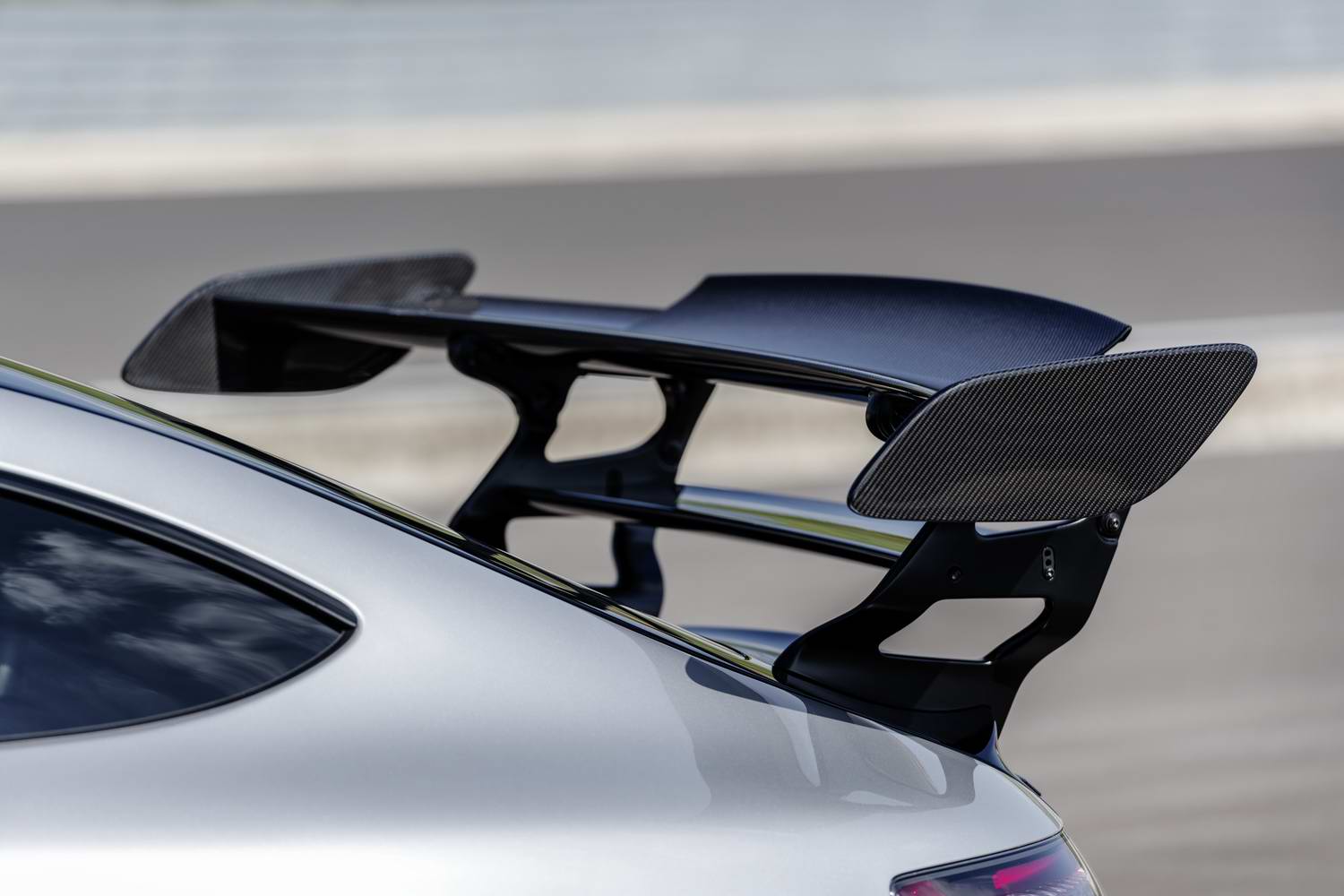 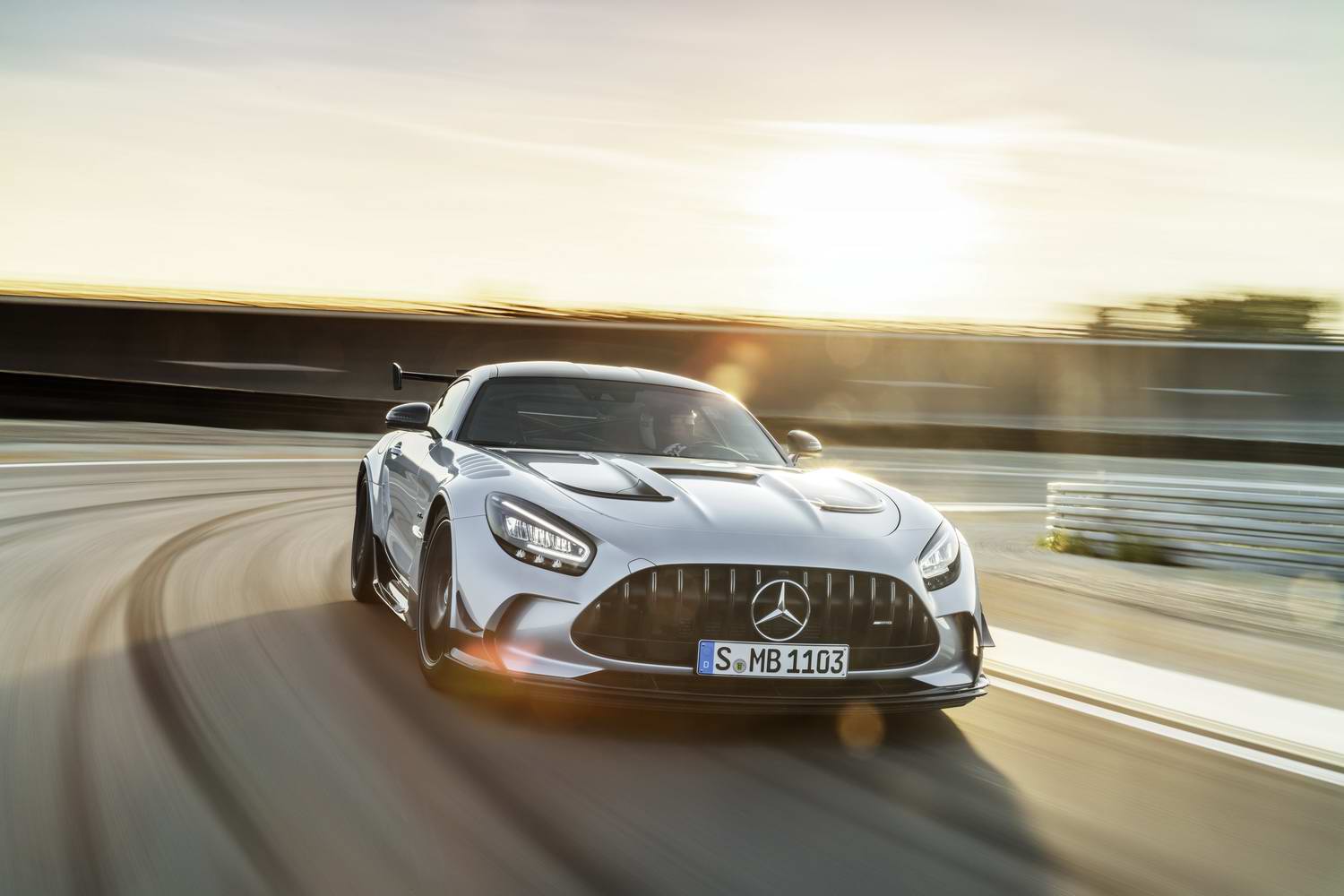 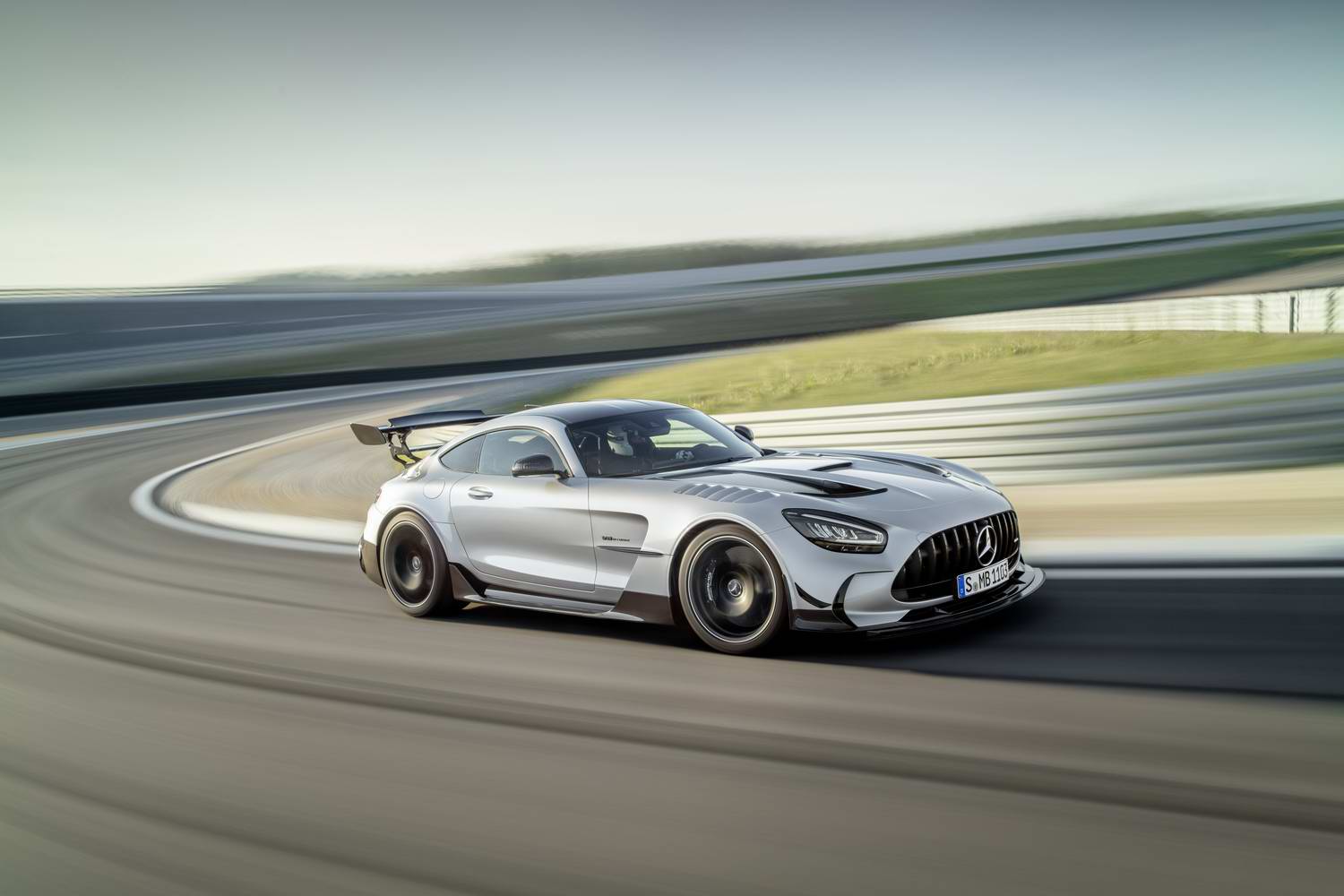 Mercedes-AMG has taken the covers off its new range-topper, the extreme GT Black Series. It uses the most powerful V8 ever fitted to an AMG production car, allied with motorsport developed aerodynamics and chassis design. Despite the massive wings, we can confirm that this is a road-legal car, though Mercedes-AMG expects it to be used regularly on track by its owners.

The twin-turbocharged 4.0-litre V8 that's found in all versions of the Mercedes-AMG GT is also under the bonnet of the new Black Series model, but with significant modification. The GT R's V8, for example, makes 585hp and 700Nm of torque, but the Black Series car gets 730hp at 6,700-6,900rpm and 800Nm of torque at 2,000-6,000rpm. That has been achieved by changing over to a 'flat-plane' crankshaft, adding bigger turbochargers and intercoolers, new camshafts and exhaust manifolds.

All that oomph is sent to the rear wheels through a carbon fibre driveshaft, running within a new carbon fibre torque tube to connect the engine with the rear transaxle. The seven-speed dual-clutch gearbox is an AMG Speedshift DCT 7G unit. Mercedes-AMG quotes a 0-100km/h time of 3.2 seconds, a 0-200km/h time of 'under nine seconds' and a top speed of 325km/h.

It takes only a glance at the be-winged GT Black Series to realise that its maker was serious about its aerodynamic performance, but the detail design reveals that it's not just all about a huge rear wing. Up front, the carbon splitter has two (manually altered) positions, for a start, while the 'flics' ahead of the front wheels are said to contribute to lower drag yet higher downforce at the nose of the GT. An all-new carbon fibre bonnet is used with hot air vents for the engine bay, said to also contribute to the aerodynamic improvements. To either side of it, there are slots in the bodywork that help relieve air from the wheel wells, as do the openings behind the front wheels.

There you'll spot the wider side sills, emphasised in black carbon fibre. More of the lightweight material is found in the new tailgate, to which an enormous rear spoiler is bolted. It has two individually adjustable aerofoil blades, which are altered manually, though the larger upper blade also features an integrated active flap in the middle. This is electronically adjusted by 20 degrees depending on the driving mode, driver preference or the speed. All these measures, plus an almost fully panelled floor, result in a quoted 400kg of downforce at 250km/h.

A chassis to keep it all on track

Naturally, the GT's chassis has been extensively changed to cope with the high track speeds and forces the Black Series is capable of generating. Forged aluminium is used in a lot of the suspension components, there are spherical bearings straight from motorsport and continuously variable adaptive damping. Along with Comfort and Sport settings in the AMG Dynamic Select system, there's the Sport Plus mode, which features a novel adaptive function to adjust the damping to the quality of the race circuit surface.

Elsewhere in the chassis, the tracks front and rear have been widened and the camber at both ends is adjustable, as is a new carbon fibre torsion bar up front, matched by a hollow steel item at the back. The engine and transmission mounts are adaptive, too, while the standard tyre is the specially developed Michelin Pilot Sport Cup 2 R MO, available in two different compounds. The sizes are 285/35 ZR19 at the front and 335/30 ZR20 at the rear.

As in the AMG GT R, there's a prominent yellow adjuster in the cabin to allow the driver to quickly alter the traction control level, through nine disparate settings. Elsewhere, the colour scheme is black with orange accents (or grey, optionally). AMG carbon fibre buckets seats are included and there's a mix of Nappa leather and Dinamica microfibre trim. New, lighter door cards with loop pull handles instead of handles are fitted as well, and the sculpted AMG steering wheel features the full suite of configuration switchgear.

If you want your Black Series to feel even more like a GT3 racer, specify the optional AMG Track Package. That adds a titanium roll cage, four-point harnesses and a fire extinguisher.

Farewell to an icon

Perhaps the Black Series model is a swansong for the AMG GT, but it's also the final car launched by the company under the stewardship of Tobias Moers, Chairman of the Board at Mercedes-AMG GmbH, before he moves to Aston Martin. Moers had this to say: "The new GT Black Series is our latest automotive highlight and continues a tradition established in 2006. The sixth version of its kind is another AMG milestone and impressive proof of the incredible development expertise in Affalterbach. I am proud of the team who have created a unique super sports car, which now represents the absolute peak of our successful GT family. The performance, looks and driving dynamics of the GT Black Series are second to none. This project was a fantastic end to my work at AMG, for which I am truly thankful."