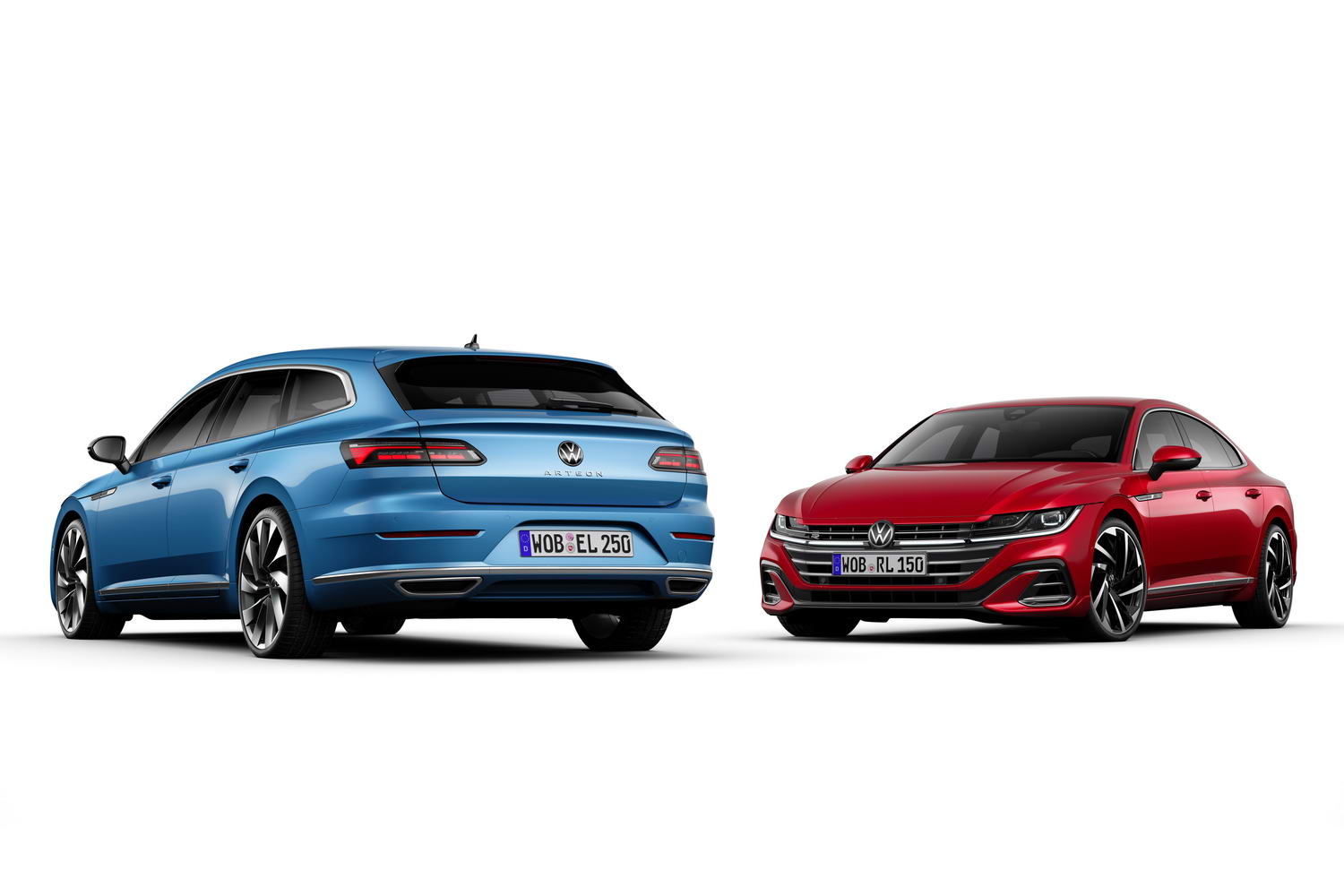 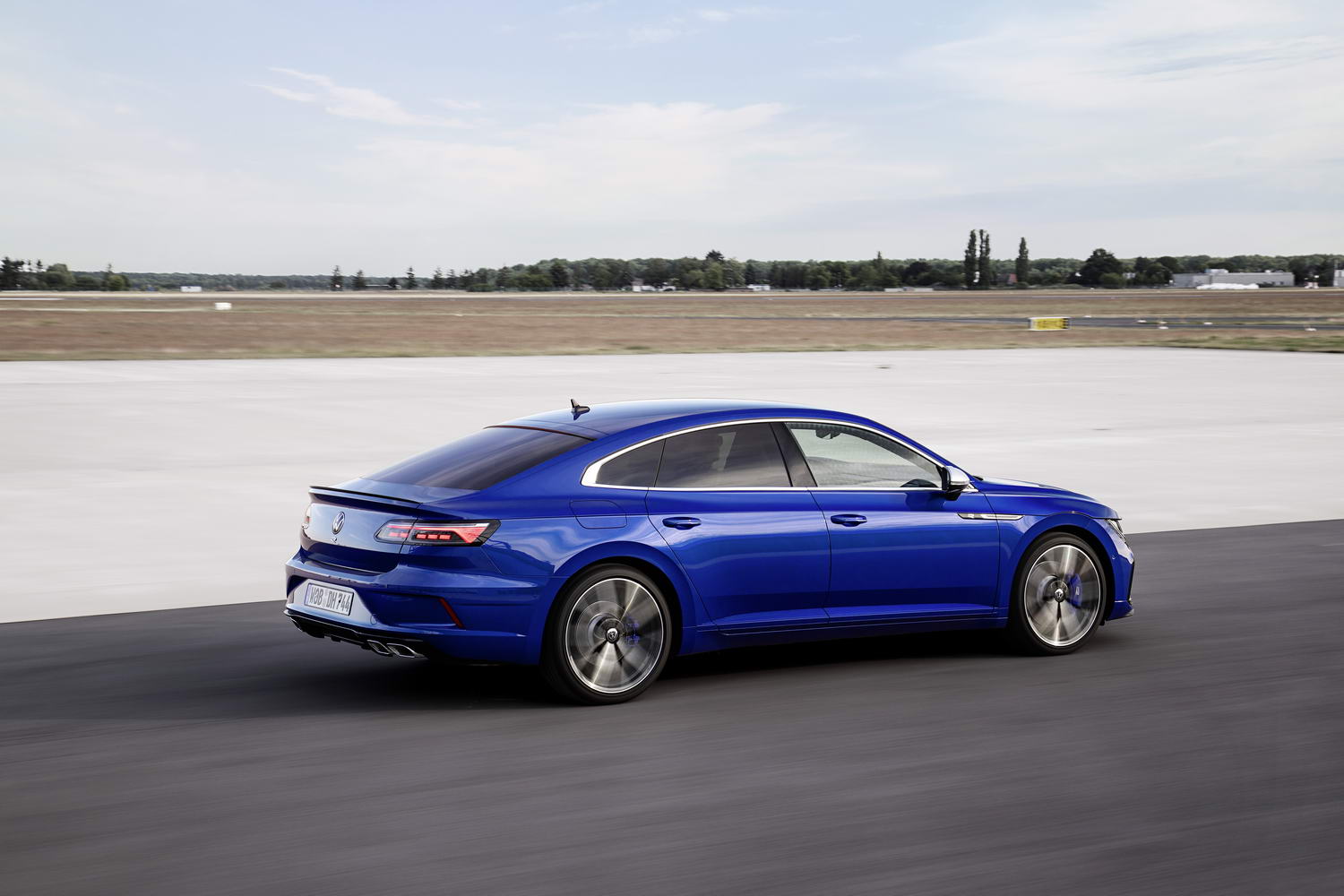 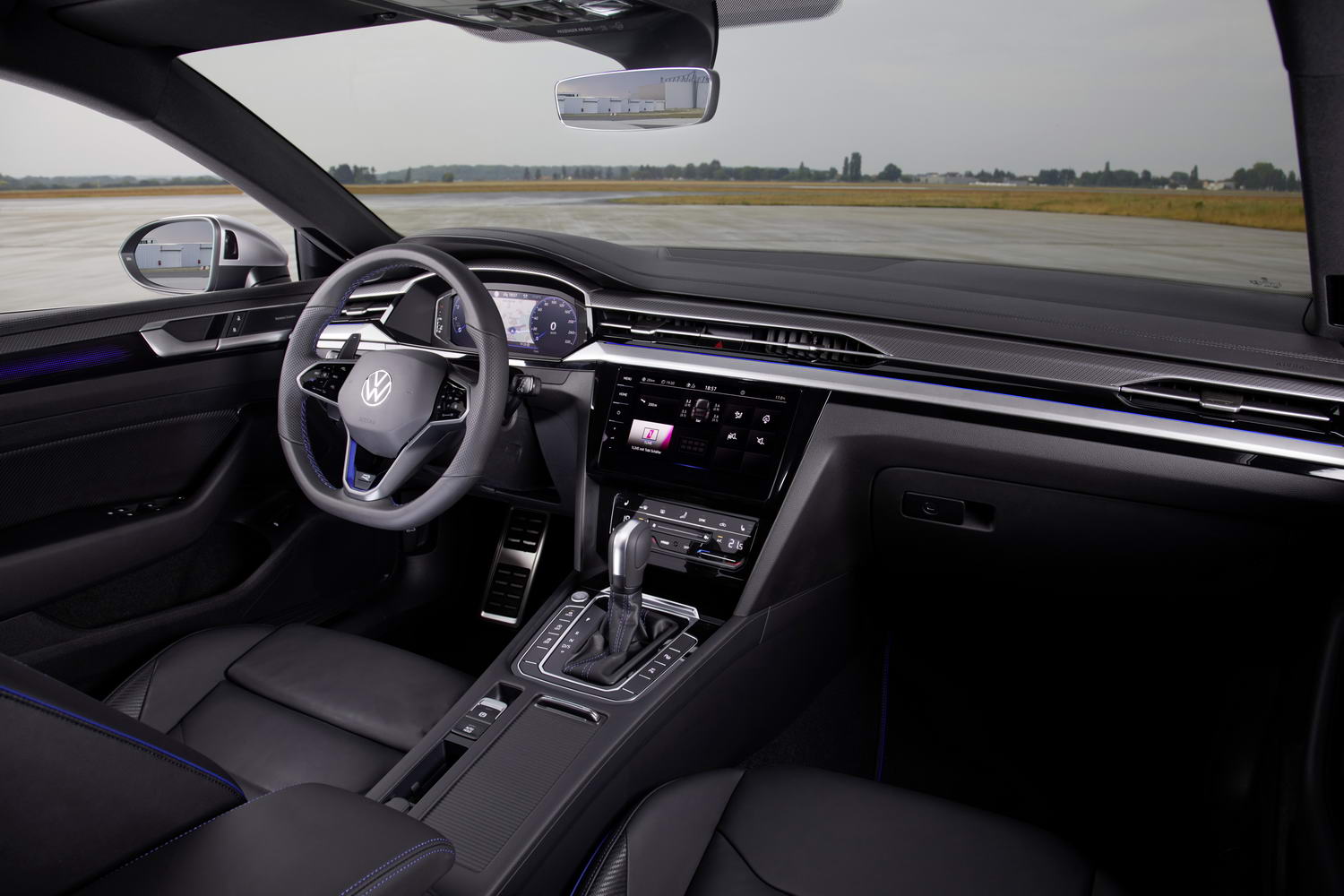 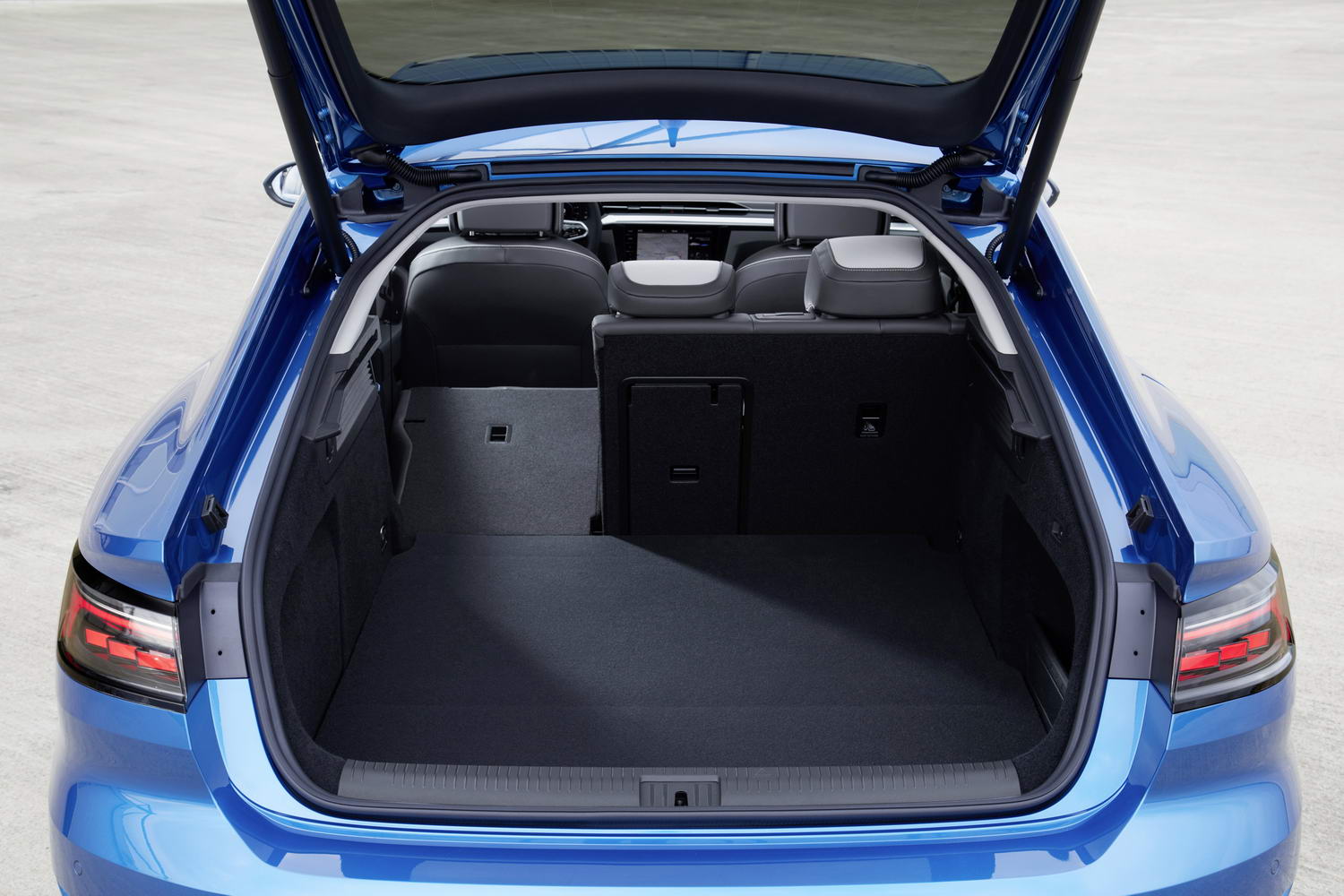 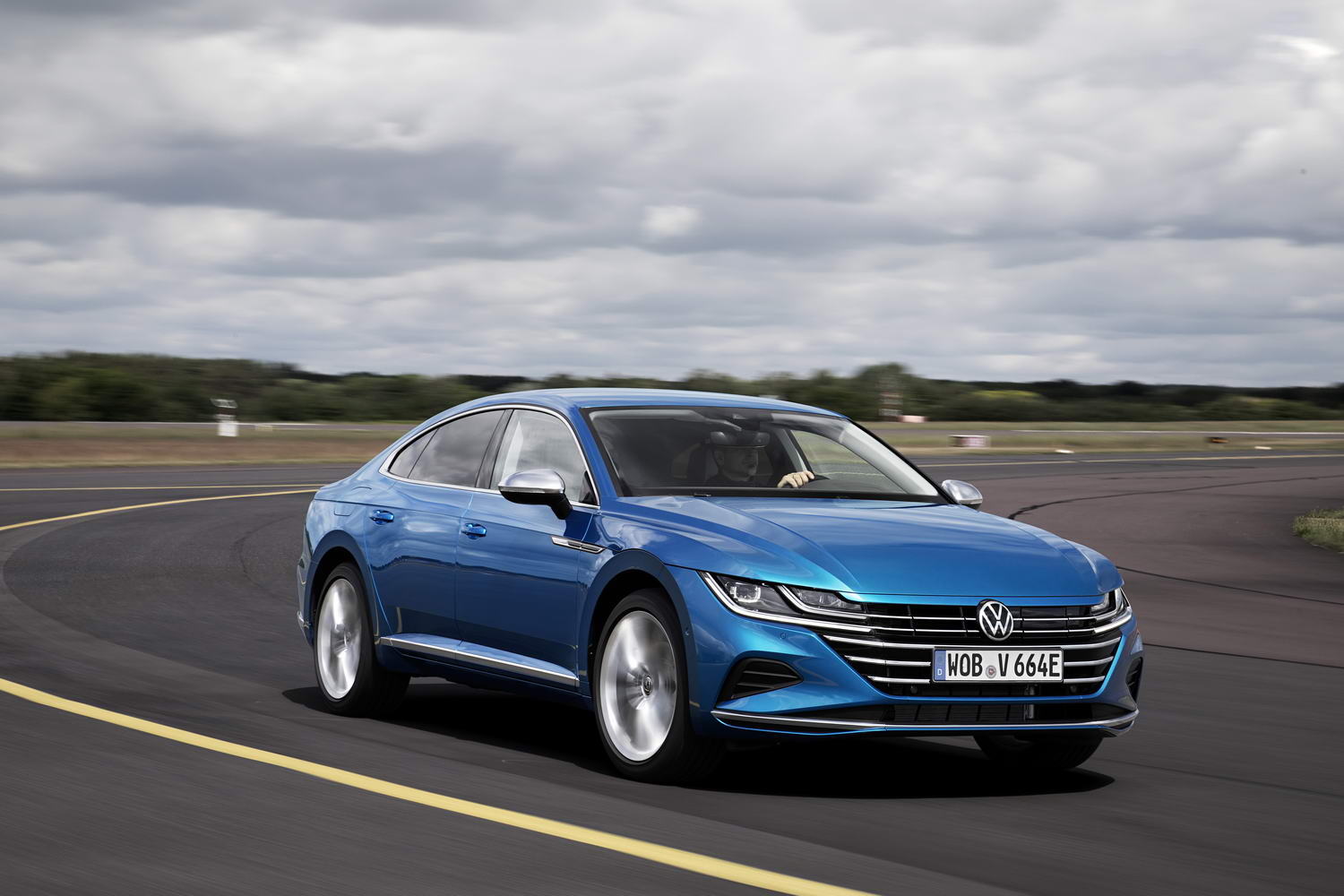 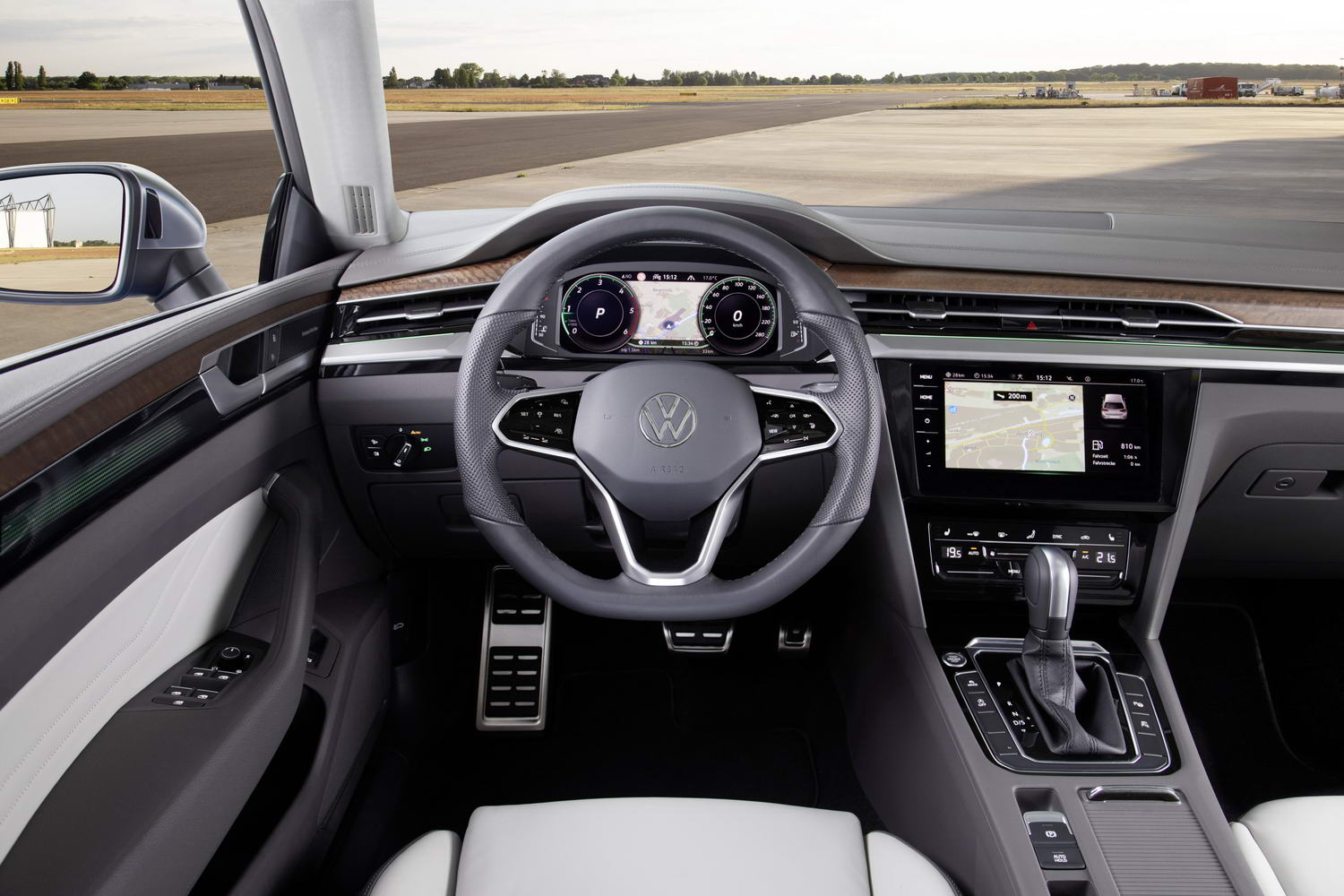 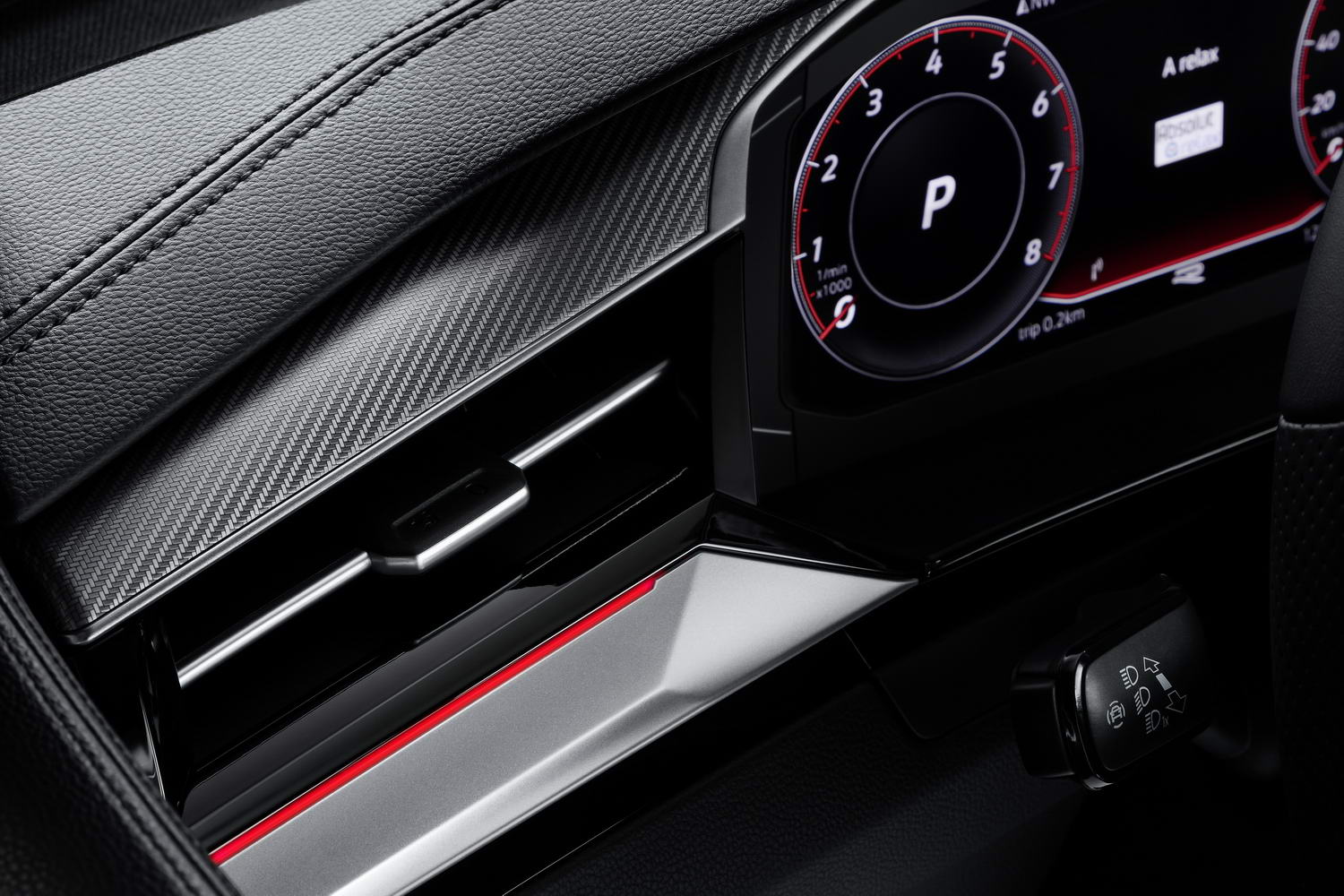 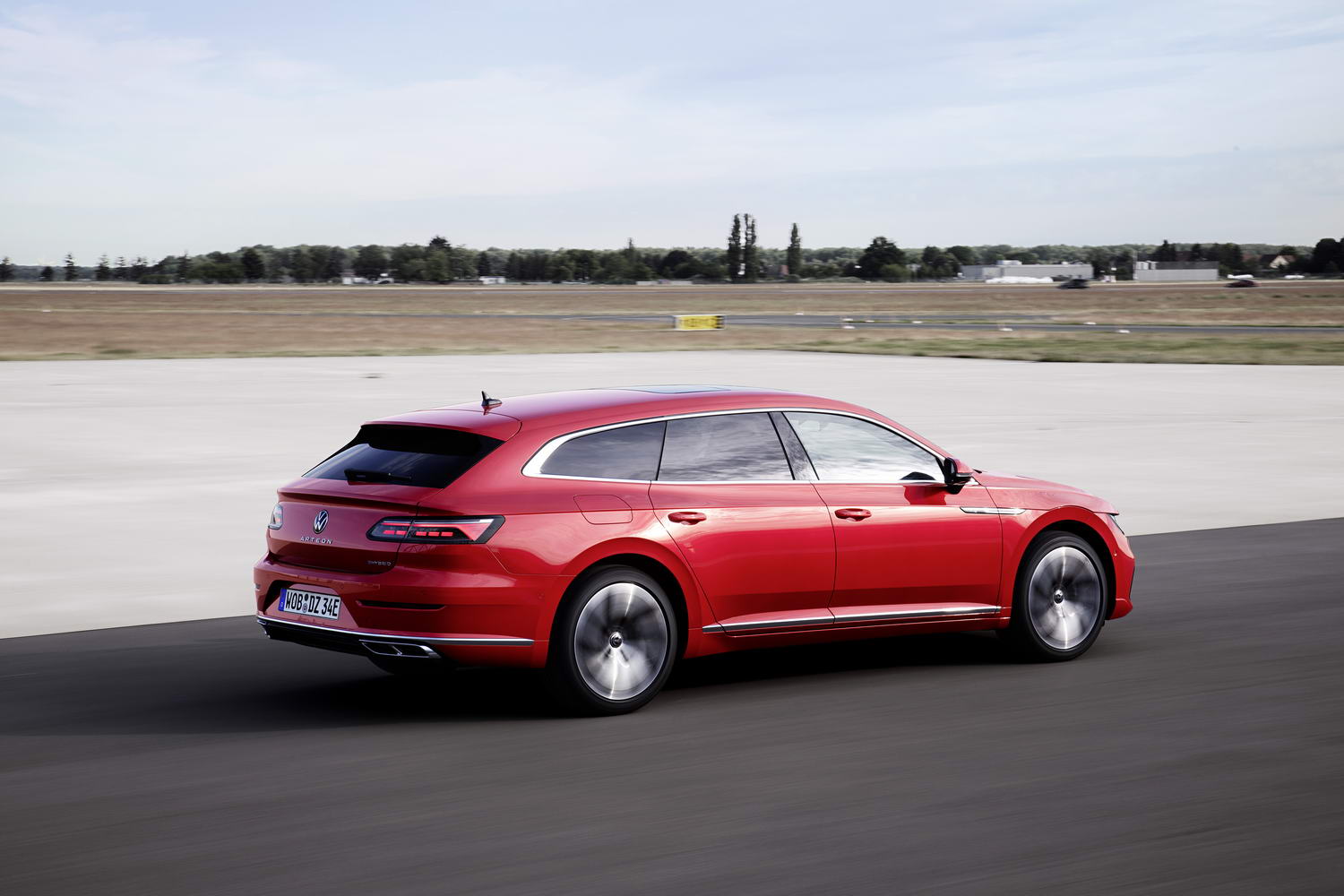 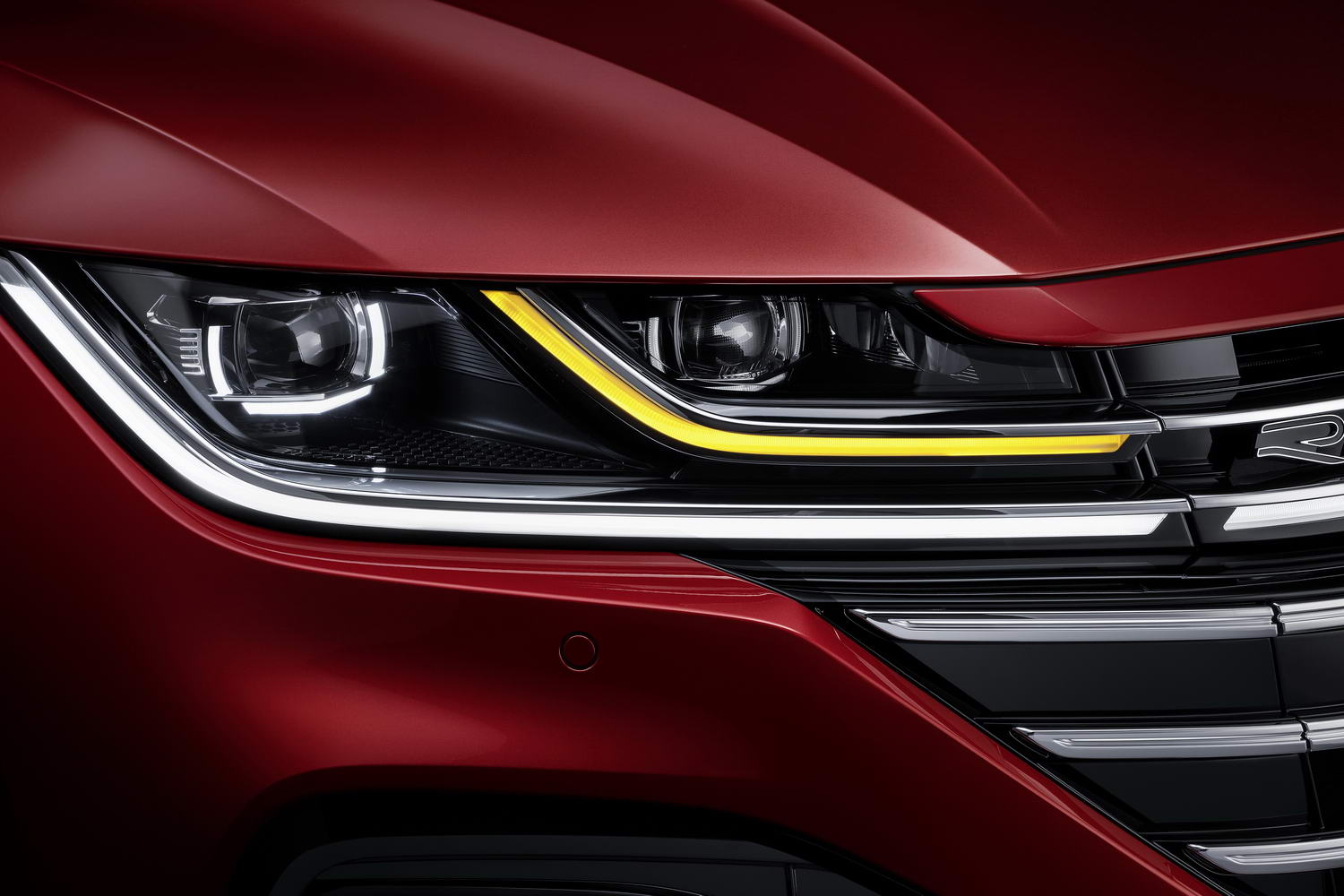 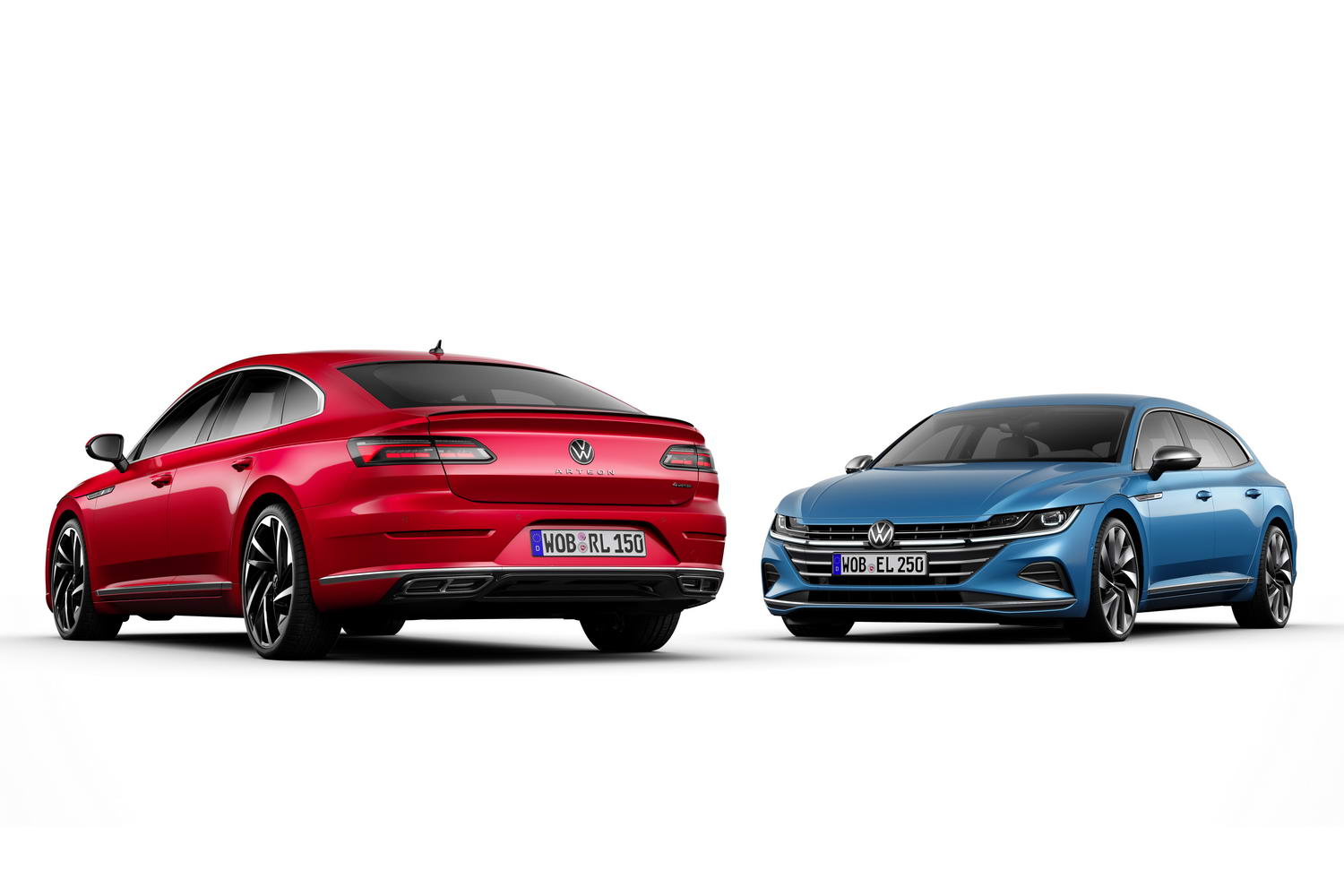 Update for the Volkswagen Arteon brings hybrid and R models, plus an estate.

Volkswagen has revealed the significantly updated Arteon, in the process introducing the new Arteon Shooting Brake estate to the line-up. Modest exterior revisions hide a major revamp in terms of technology, plus the addition of plug-in hybrid and high-performance 'R' power for the first time.

The exterior of the Arteon hardly needed any change, so Volkswagen's designers left well alone for the most part. The front and rear bumpers have been restyled, as have the exhaust outlets and detailing of the rear lights. Up front, the highly distinctive grille has been retained, though it features the new VW badge and an extra LED strip for the daytime running lights. Three new paint colours and a quartet of new alloy wheel designs have also been added to the range.

Not that any of that matters, of course, as everyone is drooling over the new Shooting Brake body style, the first time there's been an Arteon estate. From the B-pillar back the side glass is unique, while the rear window is distinctly raked and topped by a roof spoiler. The Arteons share the same overall length and width, though the Shooting Brake is 19mm taller. That helps free up an extra 48mm of rear passenger headroom, according to Volkswagen. The official boot volume of the estate, at 565 litres, is only two litres more than the Arteon fastback holds, but with the rear seats folded down, the Shooting Brake's figures rises to 1,632 litres - vs 1,557 litres for the regular car.

Big news inside the Arteon

Inside, it's all change, with a completely new dashboard, a range of premium materials and finishes, ambient lighting and a focus on technology. To that end, the instruments are now rendered on a screen in front of the capacitive steering wheel, the 9.2-inch Discover Pro touchscreen dominates the middle of the car and there's a modern new interface for the climate control. There's smartphone mirroring, an inductive charging tray and a built-in SIM car to enable Volkswagen's suite of 'We Connect' connectivity functions.

A hybrid version of the Arteon will be available for the first time, called simply the eHybrid. It uses the same plug-in hybrid powertrain as the current VW Passat GTE, which means a turbocharged 1.4-litre TSI petrol engine combined with an 85kW electric motor and a 13kWh battery pack. Volkswagen says it can go up to 54 kilometres on electric power (and up to 140km/h as well) and that, when the engine and motor work together, up to 218hp is available. Apparently, the hybrid Arteon gets the same 'GTE' badge as found in the Passat, for maximum performance, while a We Connect app allows owners to remotely connect to the car and schedule the climate control and charging.

Arteon R gets AWD and 320hp

Another first for the Arteon range is the addition of a proper high-performance range-topper, in the form of the Arteon R. It features the latest development of the well-known EA888 engine, a turbocharged 2.0-litre four-cylinder unit. For the Arteon R (which can be had in both fastback and Shooting Brake body styles, incidentally), maximum outputs are 320hp at 5,350-6,500rpm and 420Nm of torque from 2,000rpm. A seven-speed dual-clutch automatic gearbox is employed, as is all-wheel drive. Volkswagen calls the system 'R Performance Torque Vectoring' as it can divide up the engine output between all four wheels as the conditions demand - with up to 100 per cent of the output to one wheel. Naturally, those wheels are 20-inch alloy items as standard, as part of a suitably R visual makeover inside and out. The Arteon R also gets quad exhaust outlets and an upgraded brake system, along with a 20mm lower ride height.

For the Irish market

There will be conventional diesel and petrol engines as well, of course, with the latest generation of 2.0-litre TDI Evo engines (150-200hp) getting VW's new 'twin-dosing' technology to clean up the exhaust stream. The trim lines are called Arteon, Elegance, R-Line and R and, while Irish pricing has not yet been finalised, it is expected that there may be an increase across the board. The Shooting Brake is predicted to cost about €2,000 more than the equivalent Arteon fastback and the range-topping Arteon R is likely to be approximately €70,000. The first examples of the new Arteon will arrive in Ireland this autumn.