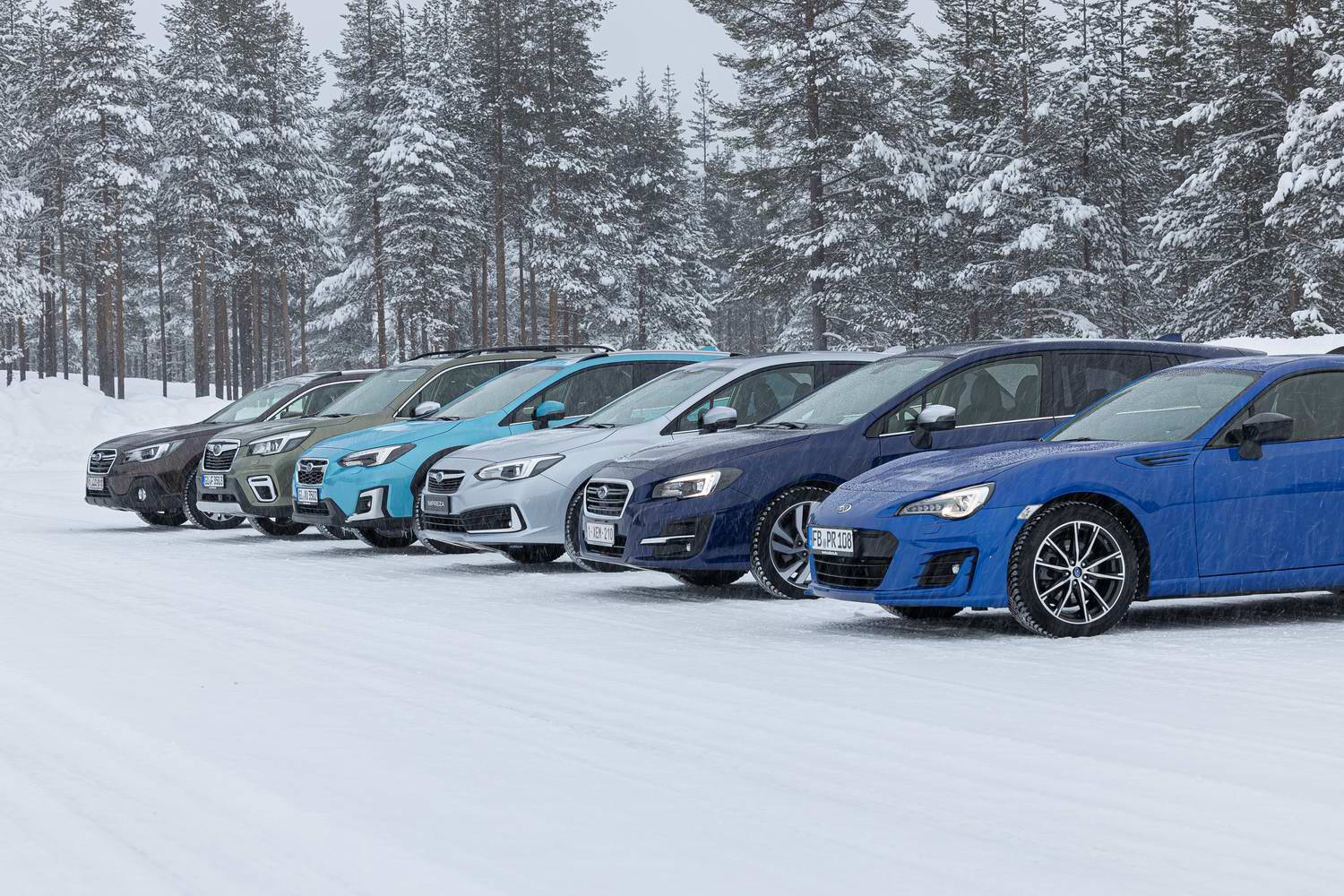 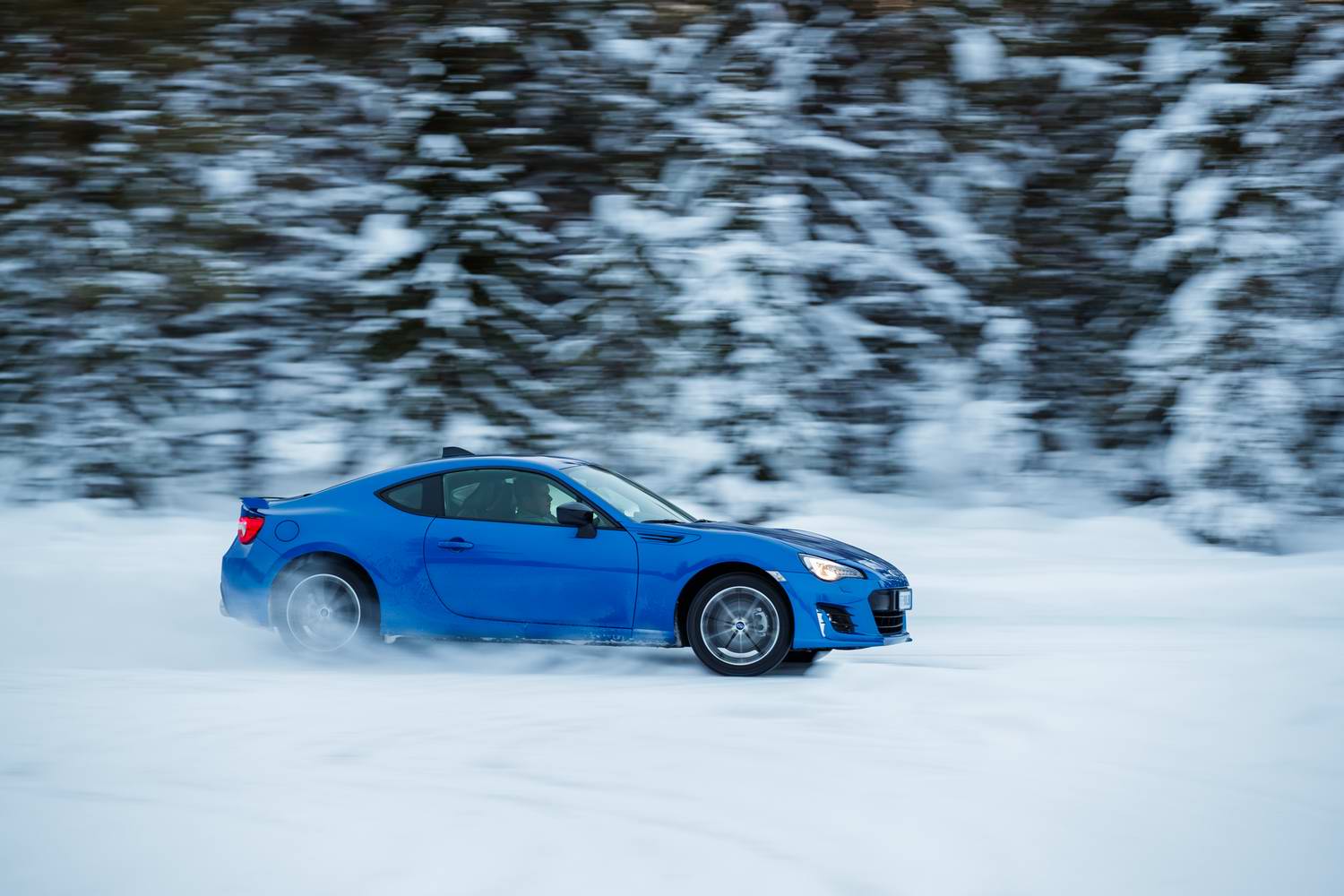 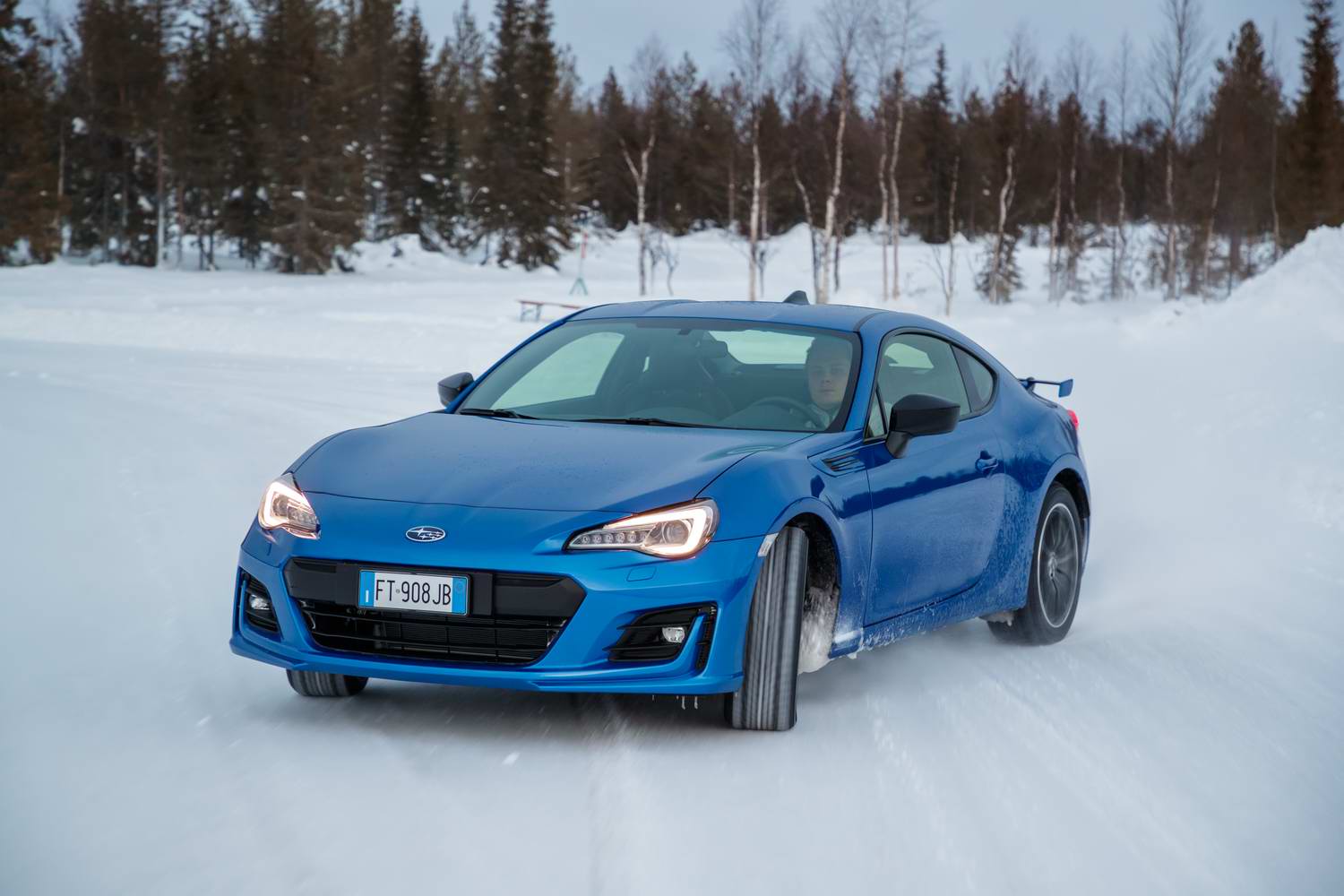 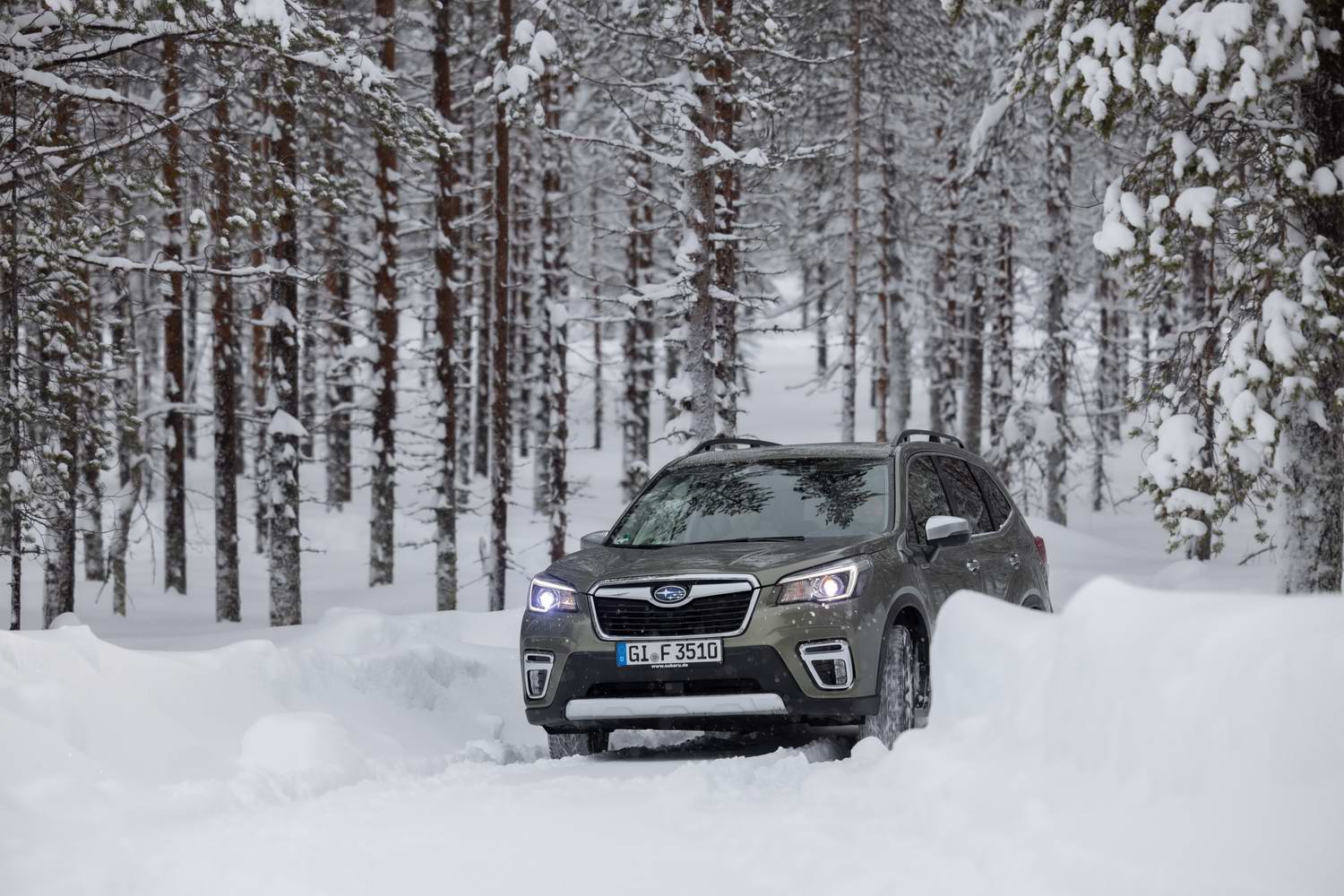 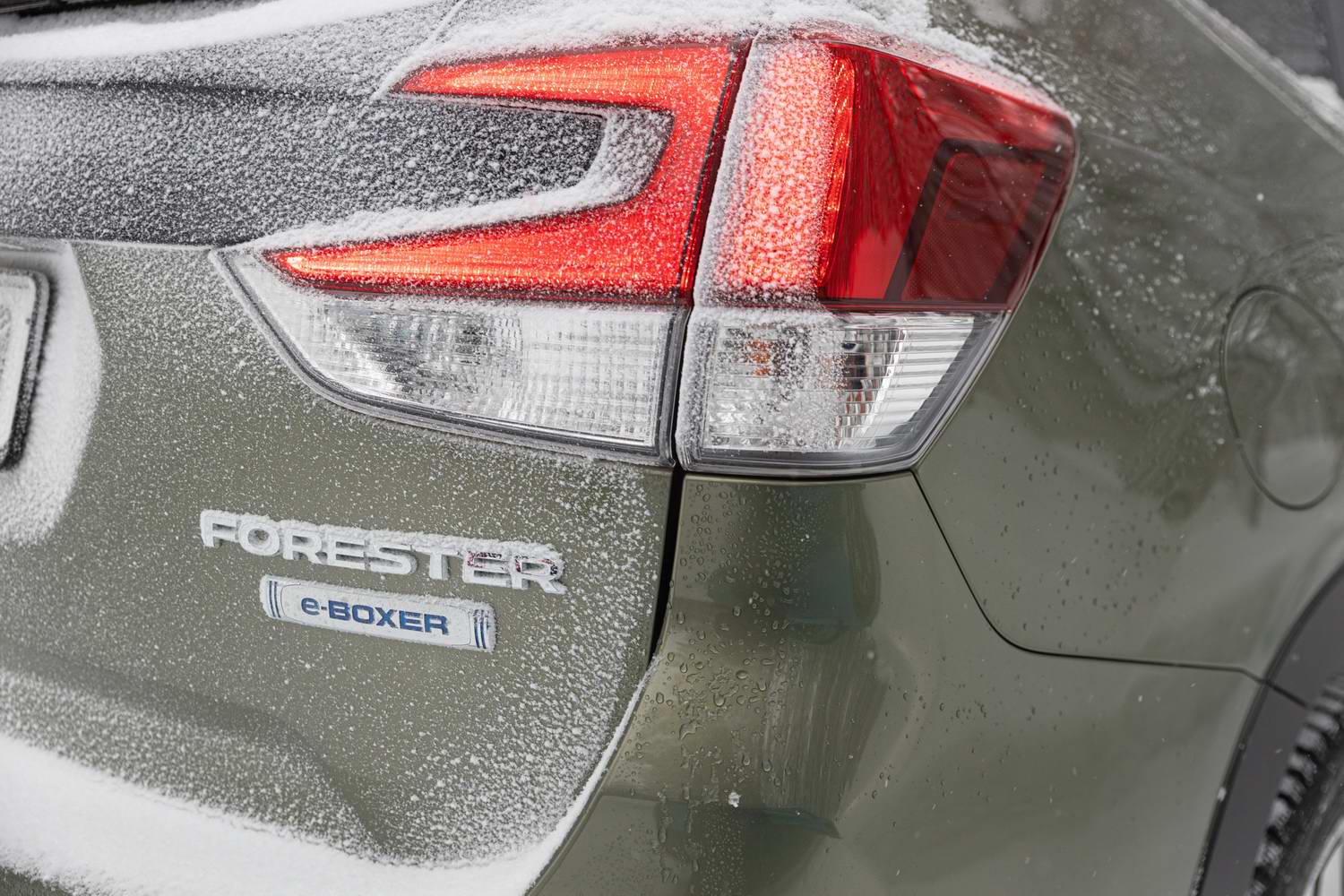 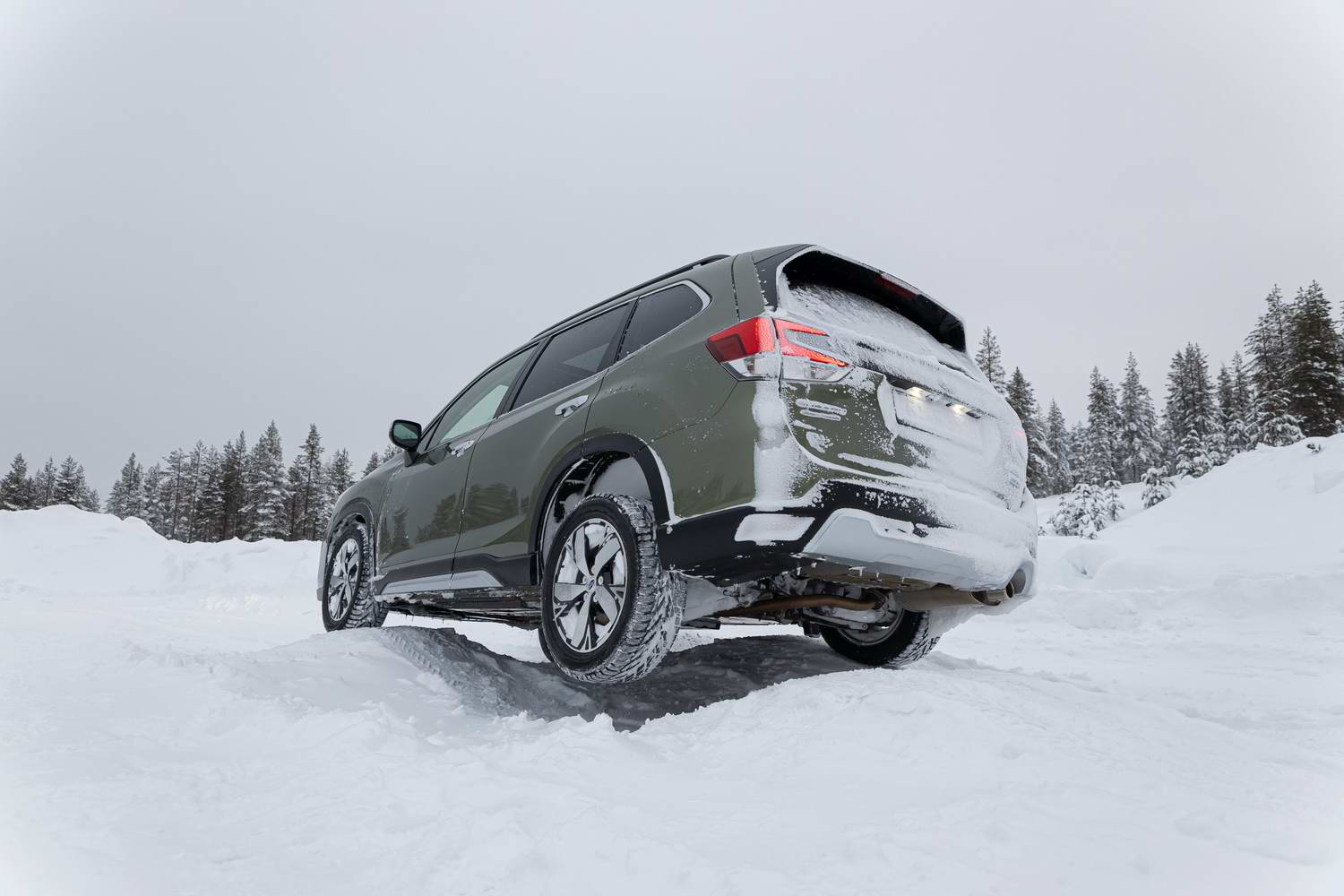 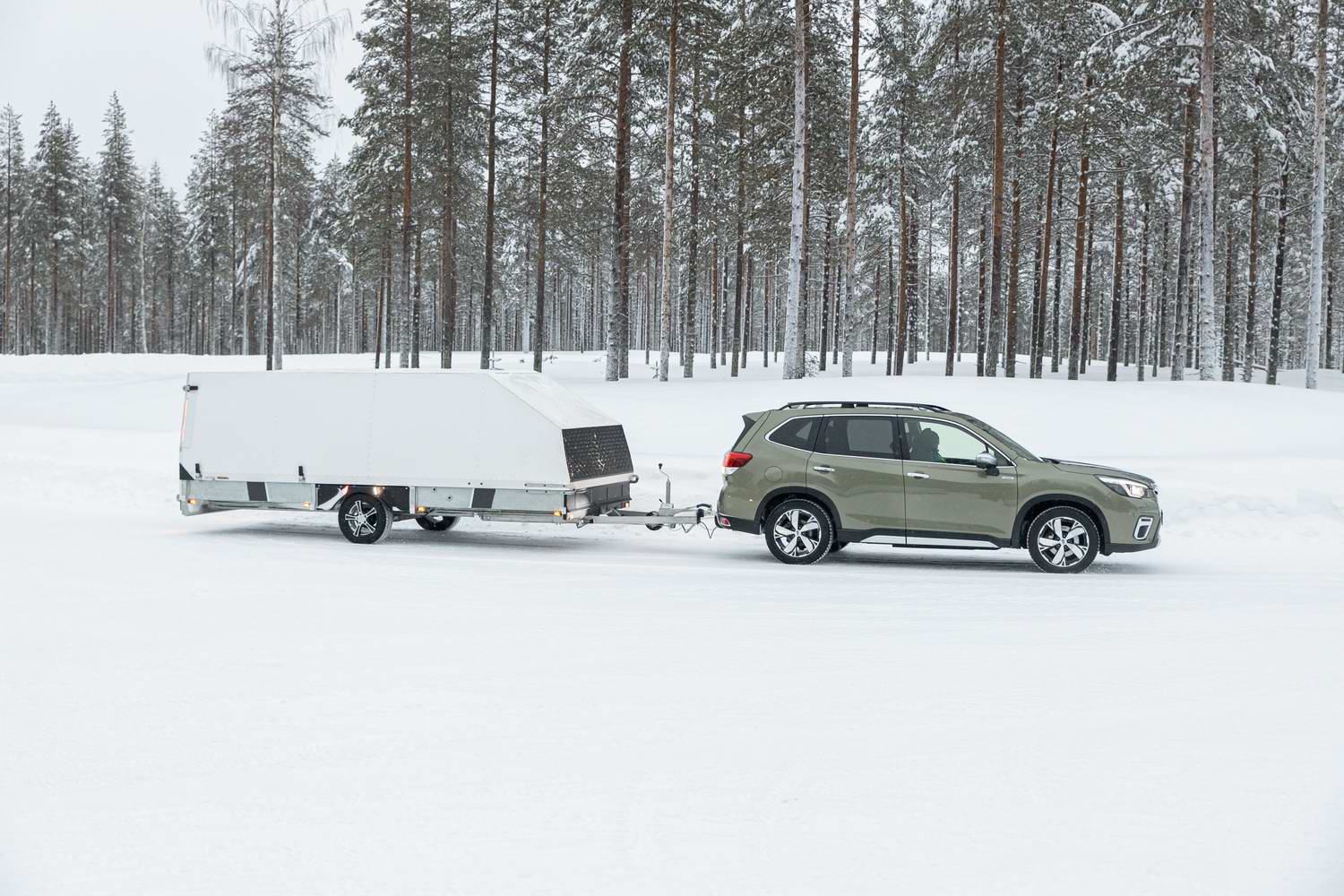 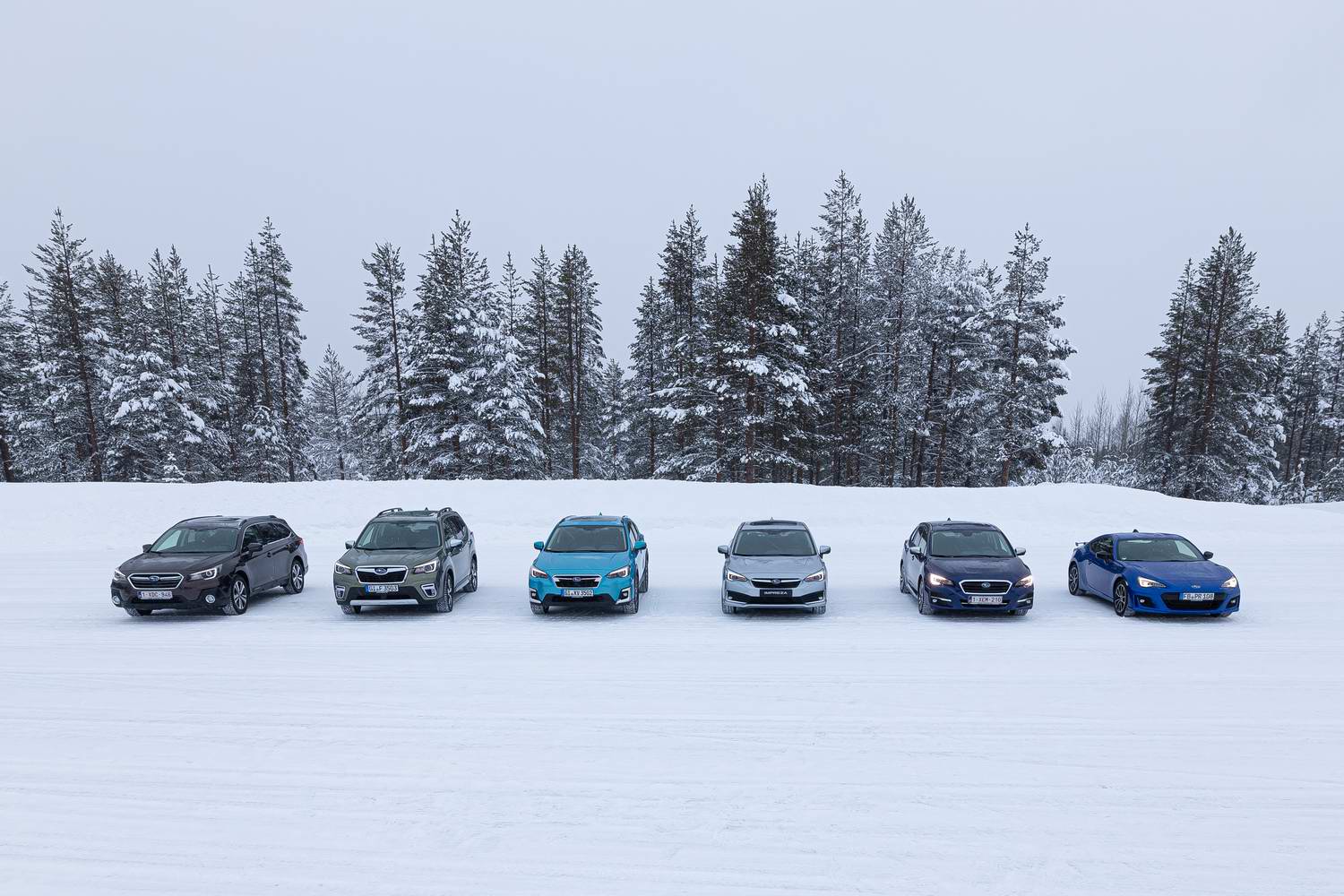 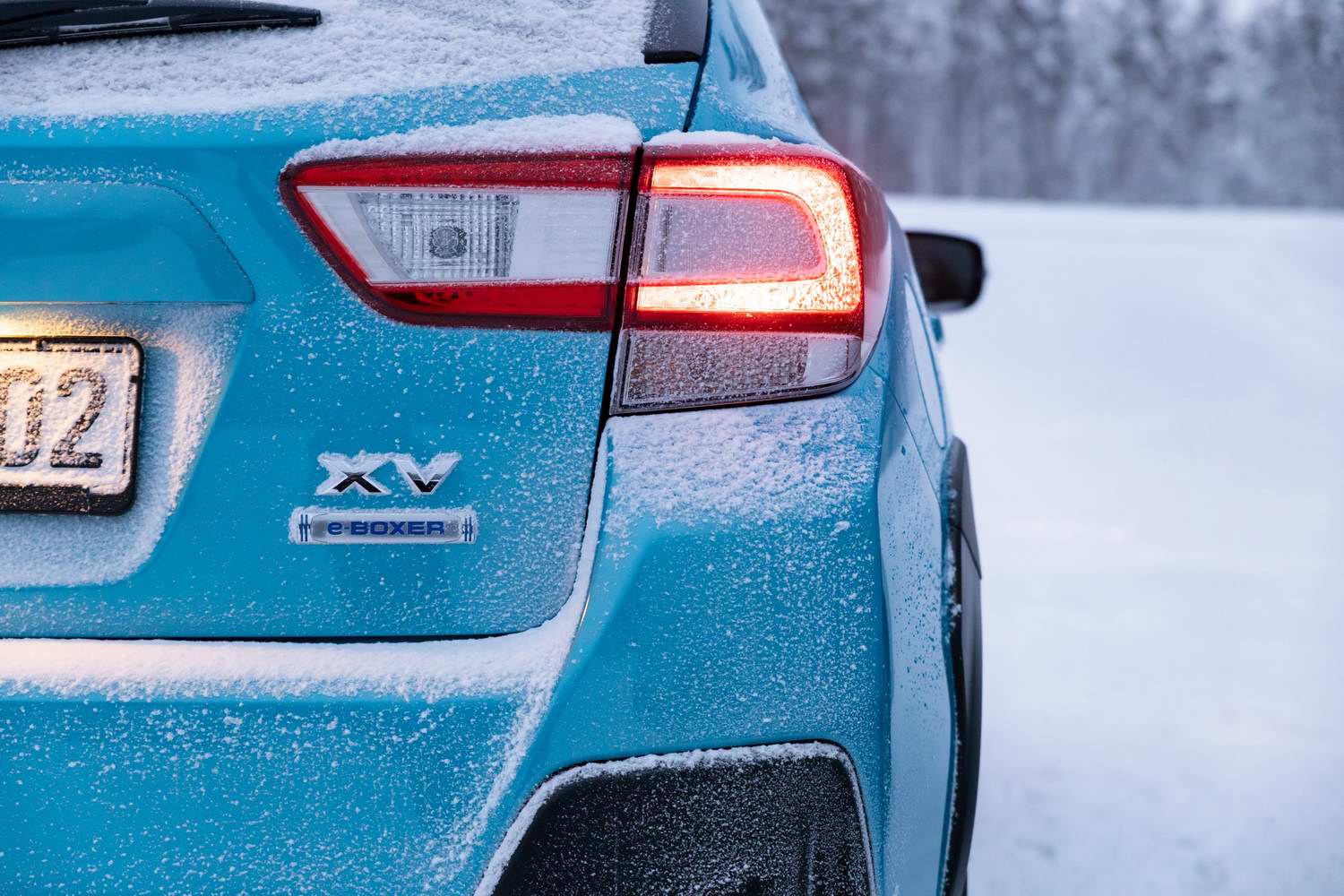 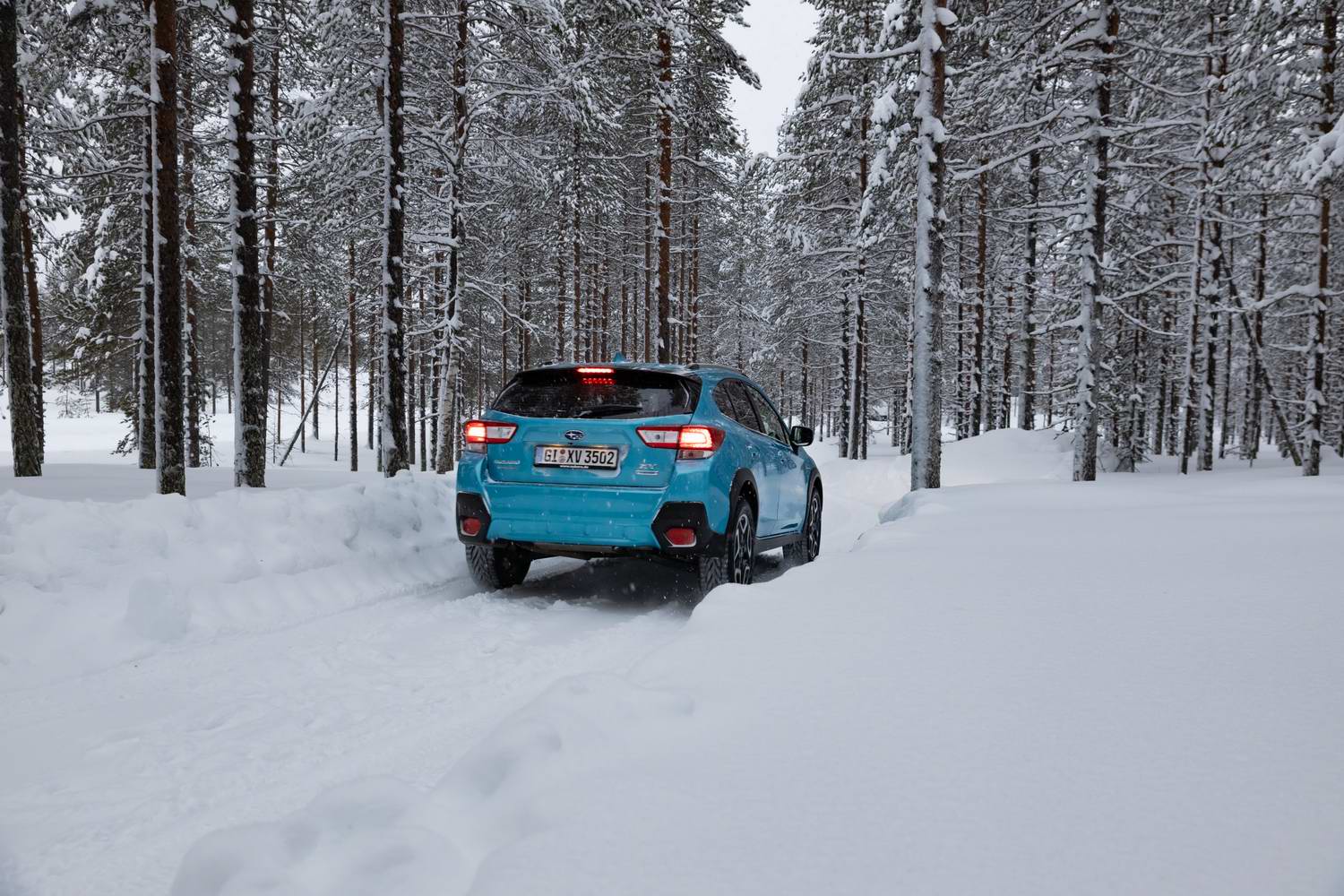 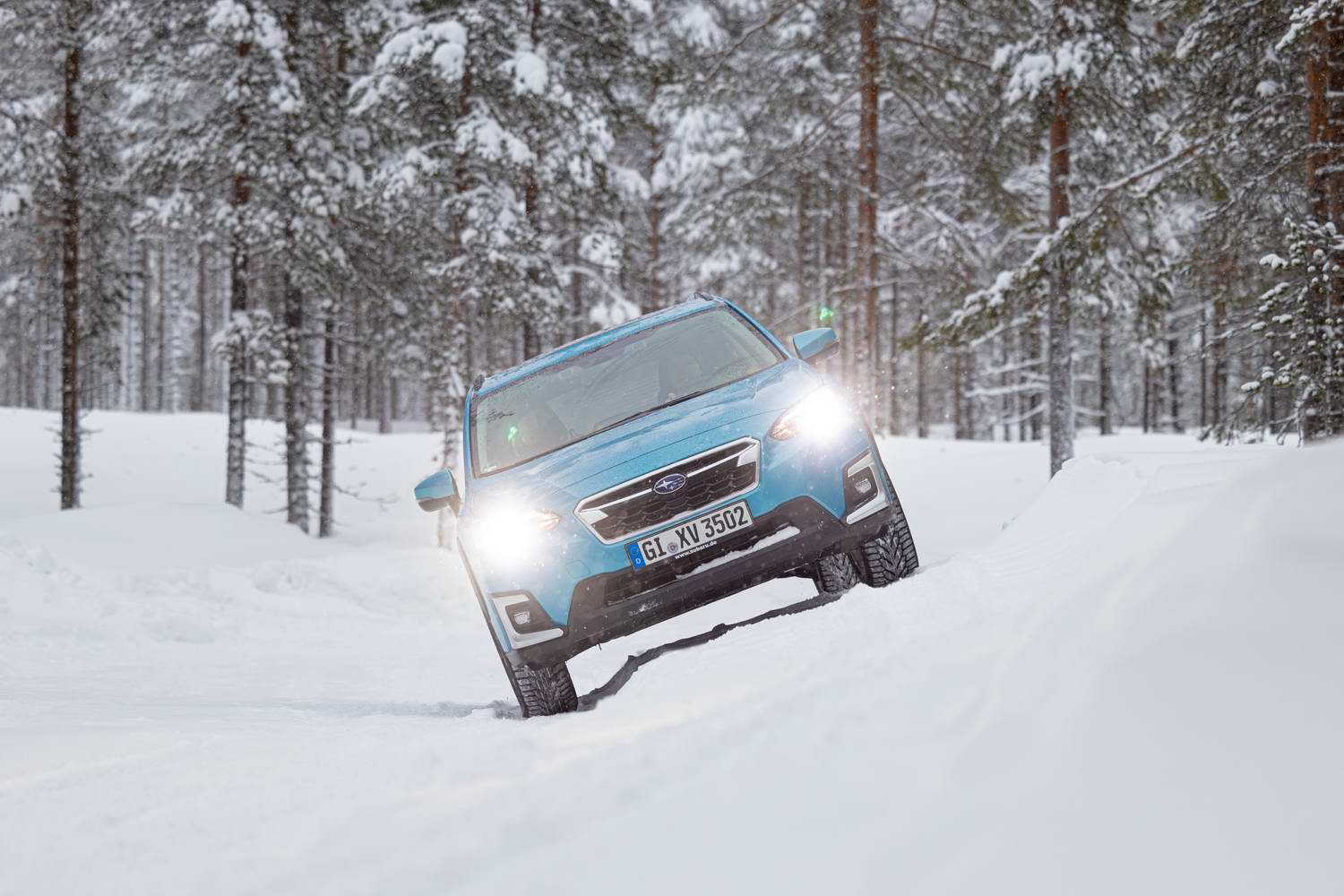 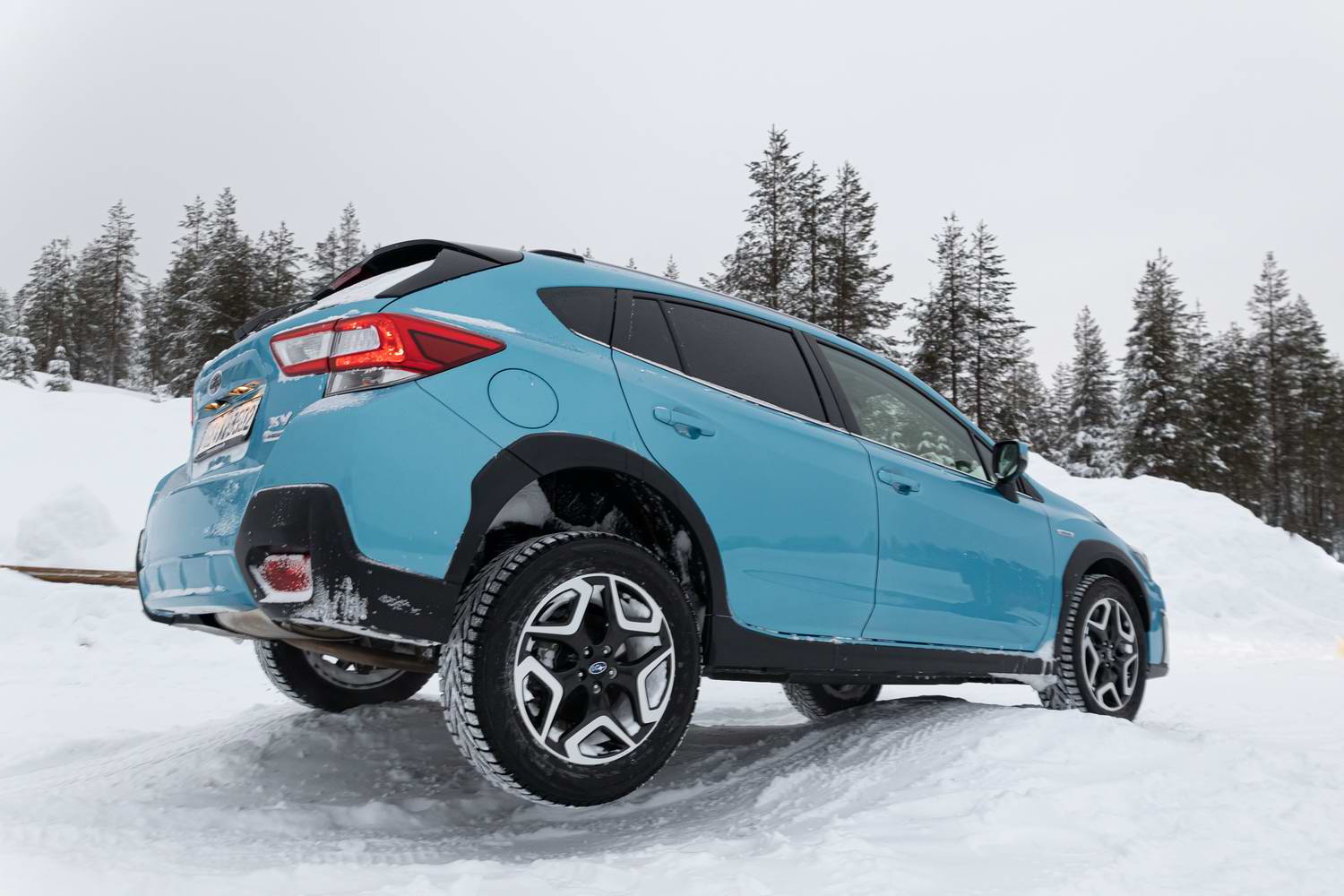 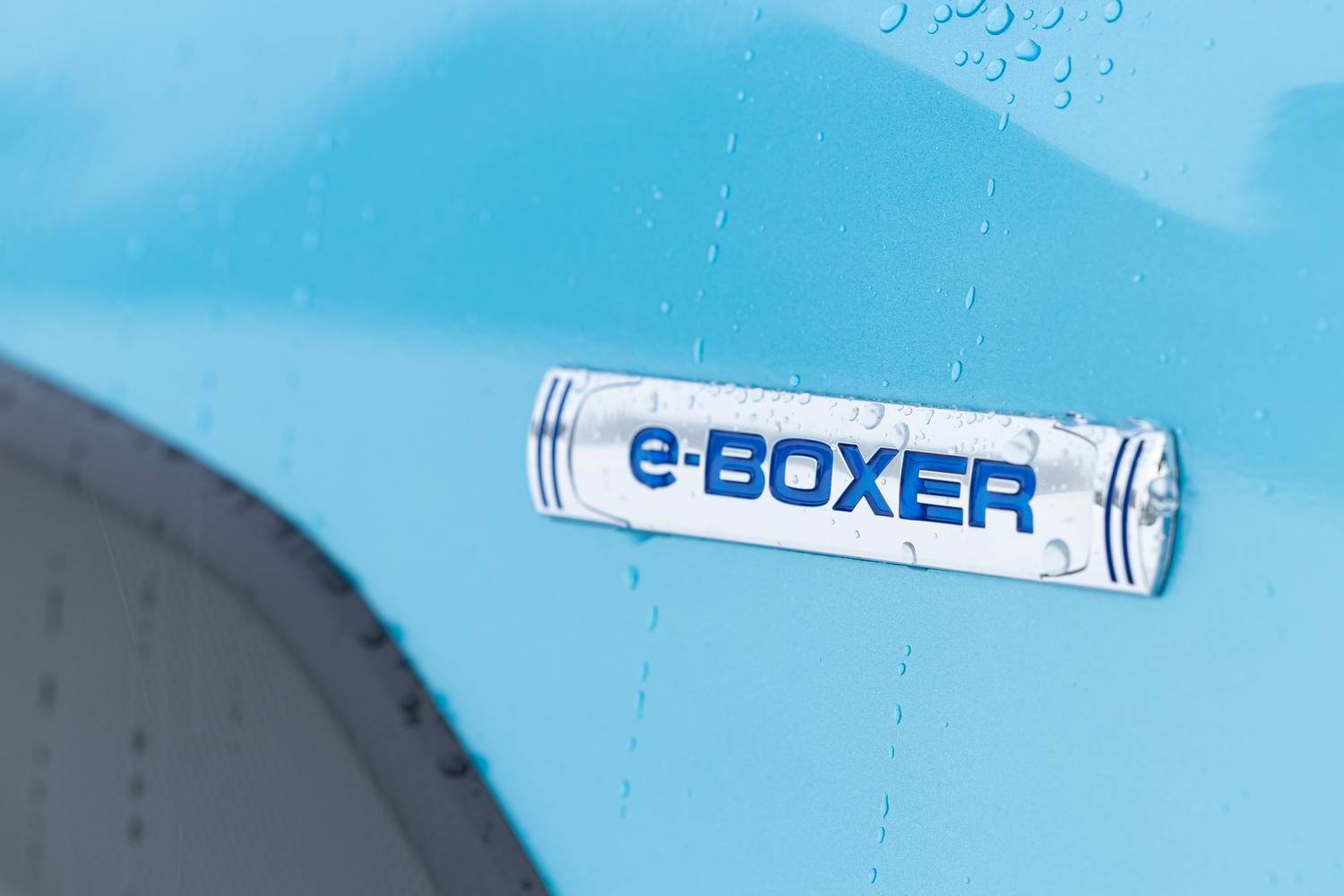 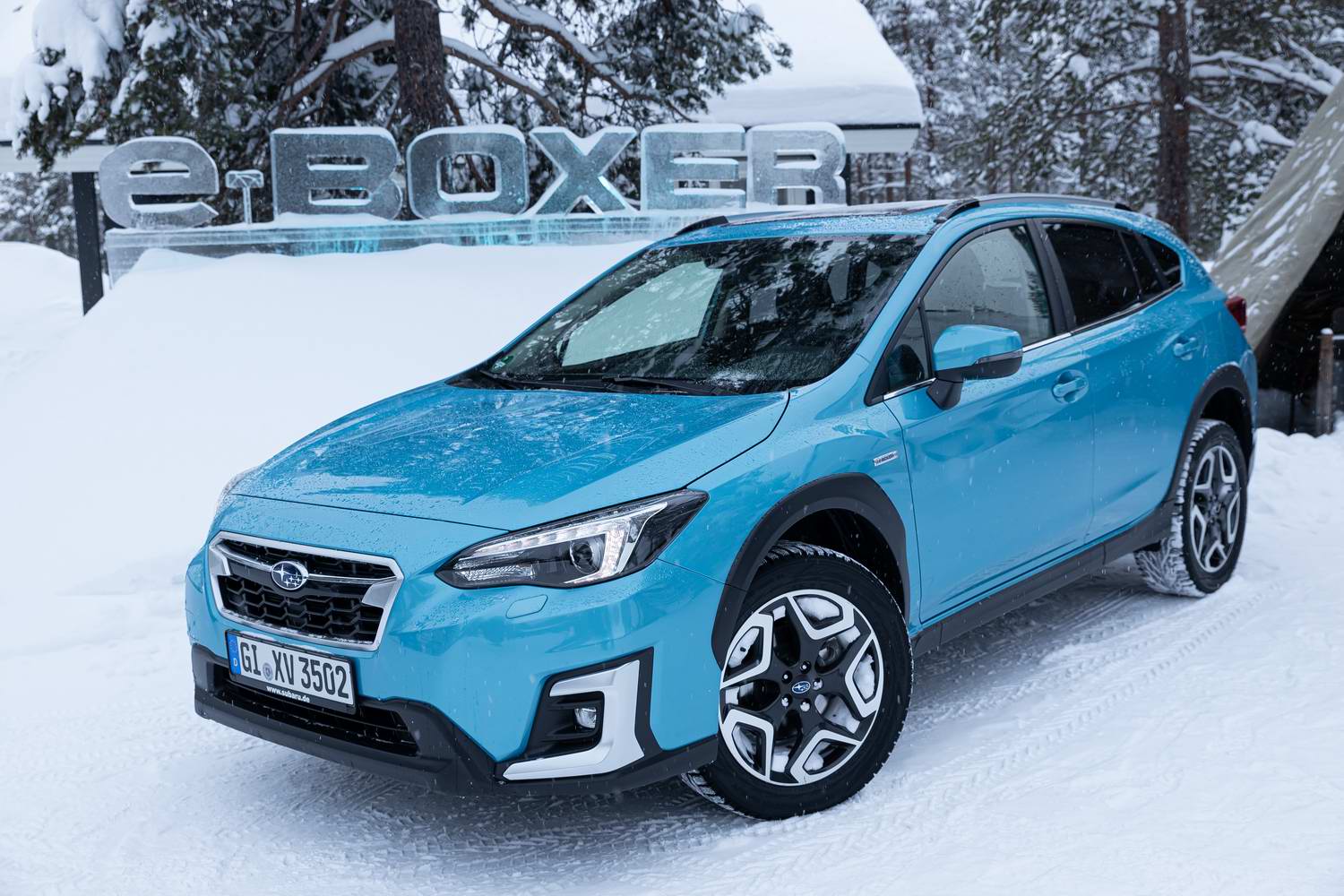 "Wait here just a moment" said the nice person in the heavy jacket and ski pants. "You might want to leave a little room in case the other car slips back." Yeah, no kidding. This is not your normal hill-start test. Ahead of us is the vertiginous rise of an actual, real, ski-slope. Now, I'm not one for strapping planks of wood to my feet and tumbling down a mountainside, so this may well have been the ski-slope equivalent of a creche - you must be shorter than this sign to slide down here style. Still, to me it looked positively towering and instead of sliding down it, as gravity would permit, we were going to drive up it. In a crossover hatchback.

Of course, a Subaru crossover hatchback is not your normal crossover hatchback. This Subaru XV e-Boxer Hybrid has permanent four-wheel drive, enough ground clearance to haul itself over serious off-road obstacles, the safety blankets of a camera-based anti-collision system and an X-Mode setting that tenses the car's various components for heading off the beaten track.

Typically, we had forgotten to switch on the X-Mode, so there was but a set of un-studded winter tyres between us and sliding back down from whence we came, possibly collecting a couple of other Subarus as we went.

We needn't have worried. With a few helpful stabs of the throttle, the XV climbed up the vast snow slope with barely a wiggle. Hanging hard left, we then came back down the adjacent slope - this time remembering to toggle X-Mode to the on position, which used its automatic hill descent control to, well, control our descent.

There was more. A snowy track through a night-darkened forest to our final destination for the day, with the XV continuing to scramble and scrabble where all but skidoos would fear to tread. As a way of Subaru reminding us that its cars are rather more rugged than most (I don't think we could have done this with a Qashqai, for example) it was pretty impressive.

Of course, this in-built ruggedness puts Subaru somewhat at odds with the rest of the car market. Most people don't really need the extra traction and off-roading abilities of four-wheel drive (and, in general, certainly aren't prepared to pay for it), yet Subaru insists on fitting it to all its vehicles. Most people don't even think about outward visibility, yet Subaru goes to great lengths to thin down the roof pillars of its cars, and it's actually hugely noticeable how much better you can see out from the driver's seat of a Forester or XV. People tend to want their cars to not only be bargains, but to buy them on finance - Subaru Ireland sells mostly to cash-buying customers who are prepared to pay premium prices for a car without a premium badge (our XV Premium e-Boxer Hybrid test car would set you back €42,995 - a Forester with the same hybrid engine will run you €45,545 in its most basic form).

If Subaru has a premium side, it's in its engineering prowess. The cars are built to last (often to the chagrin of Subaru's dealers, who may have to wait seven, even ten, years to see a returning customer). The sheer quality and longevity of the cars is legendary, and that's kind of why Subaru bothered to bring CompleteCar.ie up to the north of Finland, to Rovaniemi, to remind us of just how capable its cars are.

Ireland simply doesn't do weather like this. Oh sure, we get the torrential rain, but in Rovaniemi it was -20 degrees Celsius, and the snow was stacked a metre deep on the sides of the road. Not that you can see the road - it's the same powdery white as everything else. Conditions a tenth as bad as this would bring our entire nation to a shuddering halt. Trains would sit idle in stations. Airports and schools would close. People would, stuck at home, start to contemplate the potential tastiness of their pets. Here in Finland, in our Subarus, we were off out into the woods...

At a vast test facility, established to allow car makers to put their new vehicles through the tortures of Arctic winters, we were allowed out to play with various Subaru models. Of course, the concentration was on the new hybrid XV and Forester cars, and these proved as equal to all tasks - climbing, descending, scrambling between trees, up and down tracks of virginal, soft, snow, coping with packed ice, slaloming effortlessly between cones where you'd struggle to keep your footing. Aside from a couple of overly-ambitious attempts at traversing soft snow banks, which lead to inevitably becoming stuck, and requiring all hands to rock and push us out of the icy embrace of the landscape, the XV and the Forester coped admirably, and without missing a single mechanical beat.

As ever, such performance is way above and beyond what any Irish buyer might reasonably expect to need, or ever to deploy. I guess you could make the argument that some of our more remote and distant areas - the outlying parts of Cork, Kerry, Galway, Mayo, and Donegal - might make such mechanical talent useful, but oddly, Subaru in Ireland tends to sell mostly to urban-based customers. Go figure.

There were some other delights to be had. Drifting a Subaru BRZ coupe, Subaru's only rear-drive model, around a snowy skidpan was exactly the kind of delight that you'd expect, all sound-tracked with the braap-braap-braaaaap noise of a repeatedly stabbed throttle, the score to a million McRae videos and memories. Equally, a trip around a twisty handling course in a Levorg estate (now sadly discontinued in Ireland, but still just about available in the UK if you fancied one) showed just what a missed opportunity that model was - too expensive and too estate-y for Irish tastes, it remains (even with its 1.6 turbo engine replaced by a 2.0-litre naturally-aspirated flat-four) a deeply enjoyable and engaging machine to drive. And besides, I like estates.

Like you, I don't actually need to drive up nor down a ski slope in my regular daily driving. I don't live out in a forest, nor is my driveway a rocky mountain trail. I don't need a Subaru in my life. Yet, once again, I find myself craving one. These quirky Japanese cars are certainly not to all tastes, but that just makes them all the more desirable, if you ask me. Don't ever change, Subaru. Don't ever change.