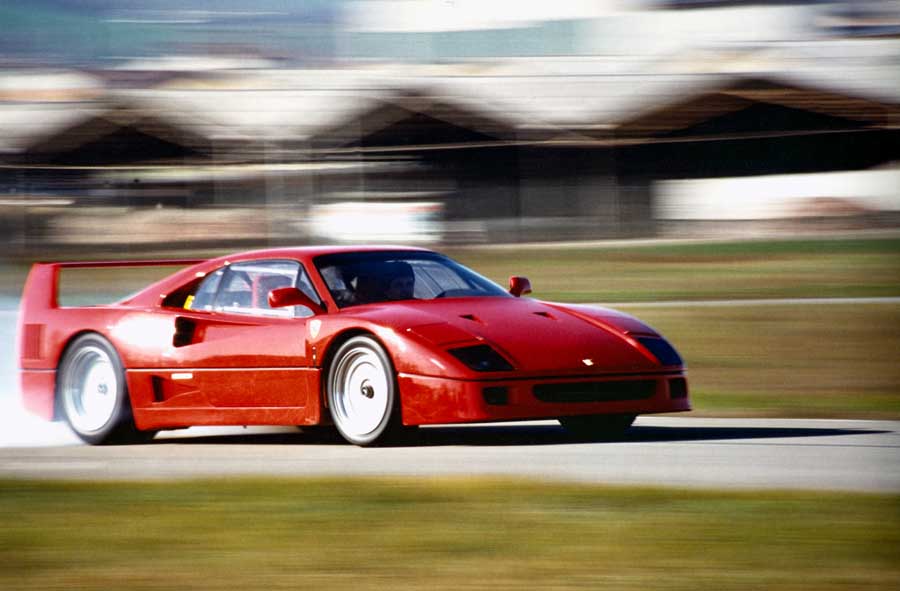 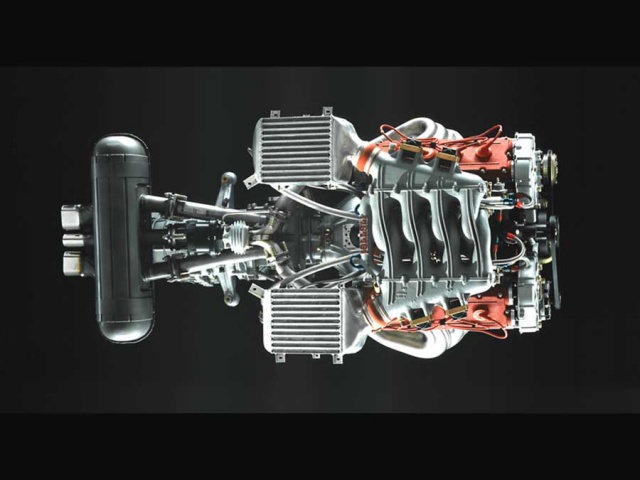 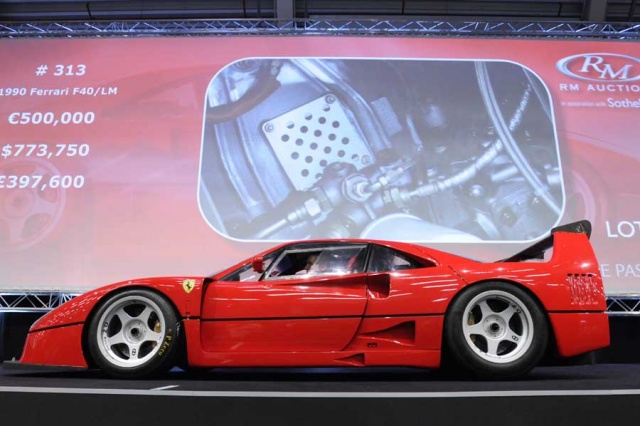 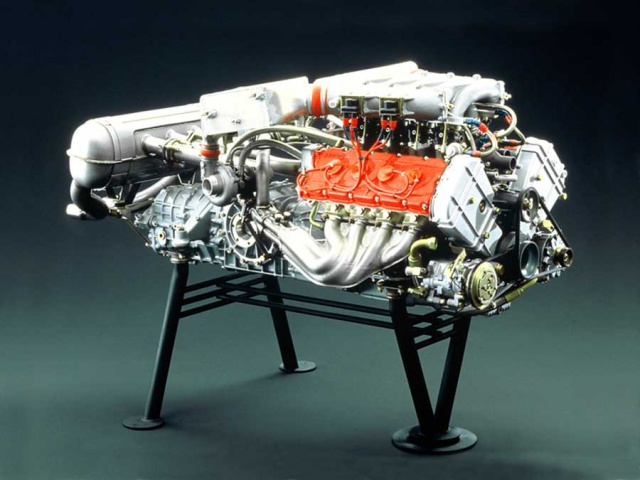 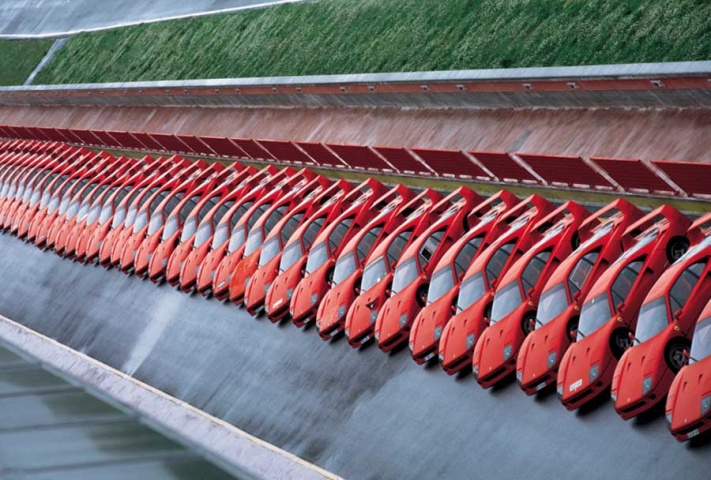 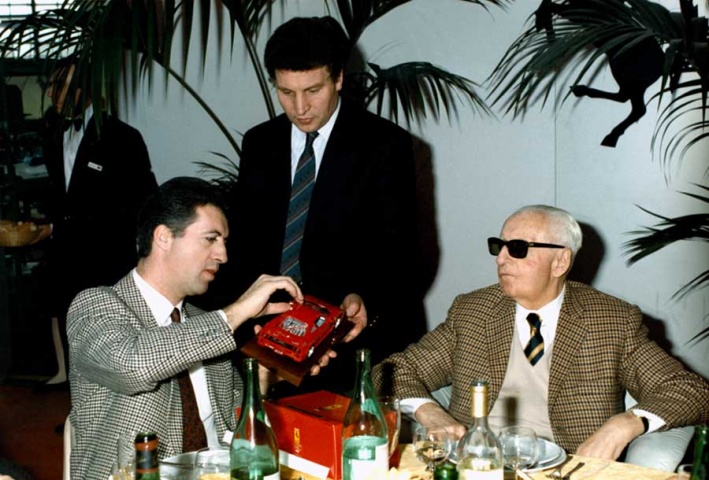 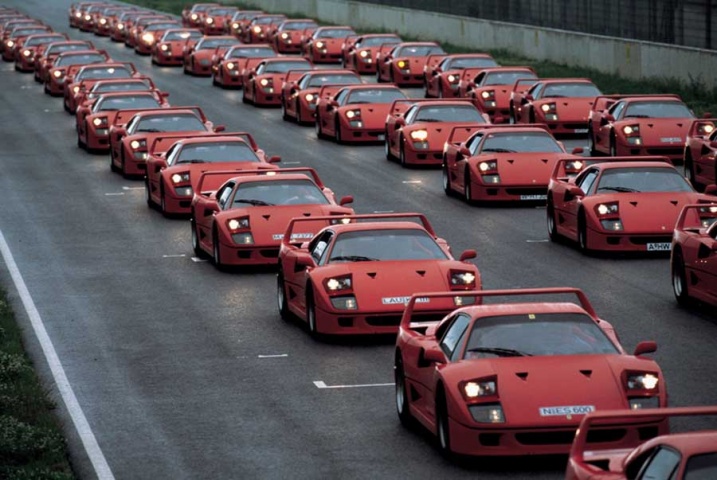 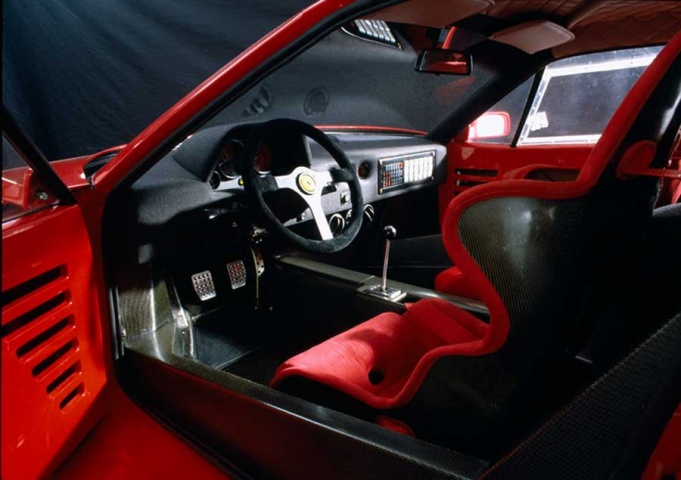 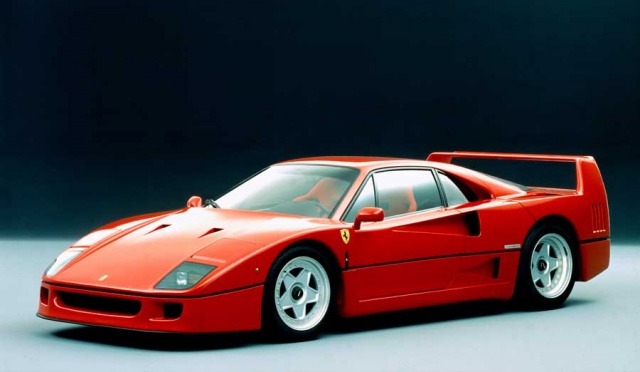 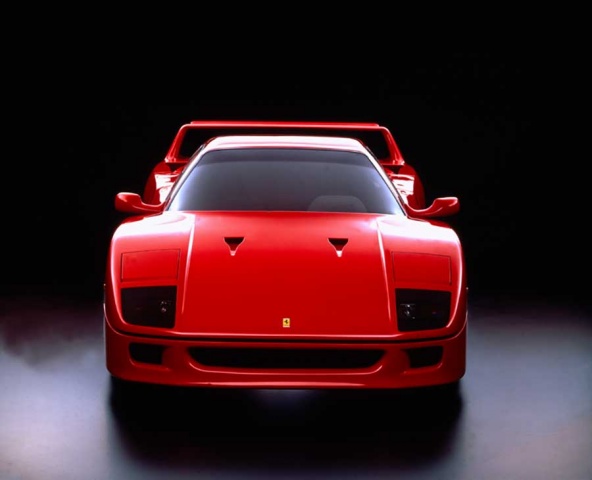 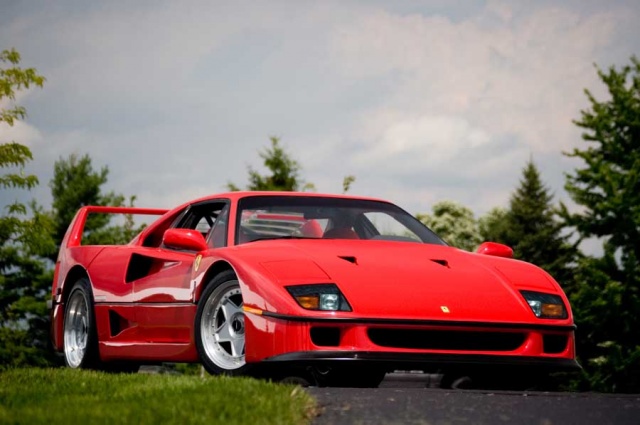 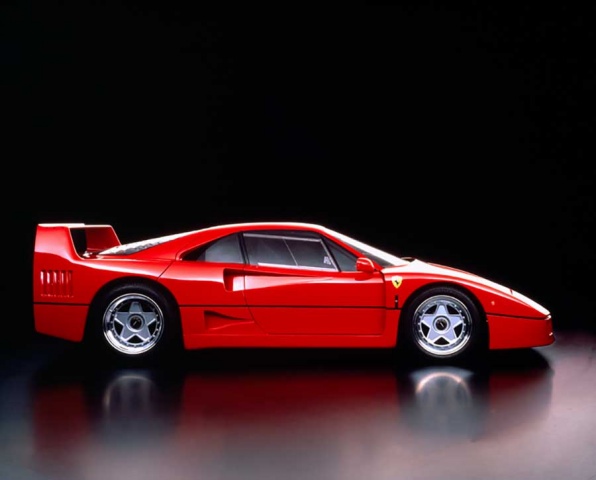 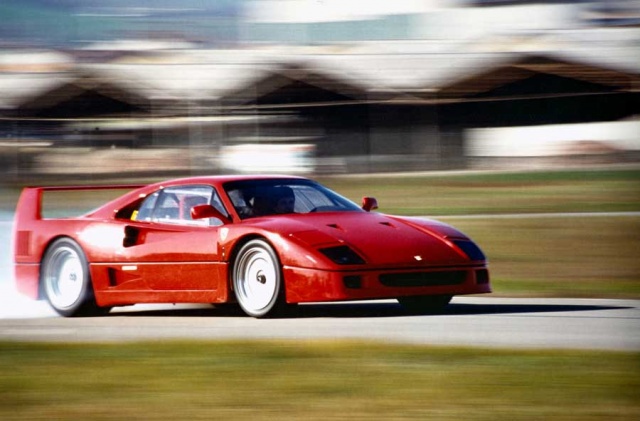 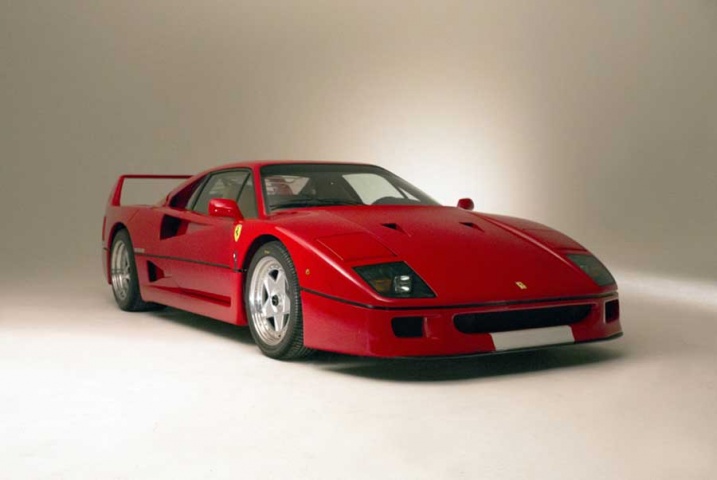 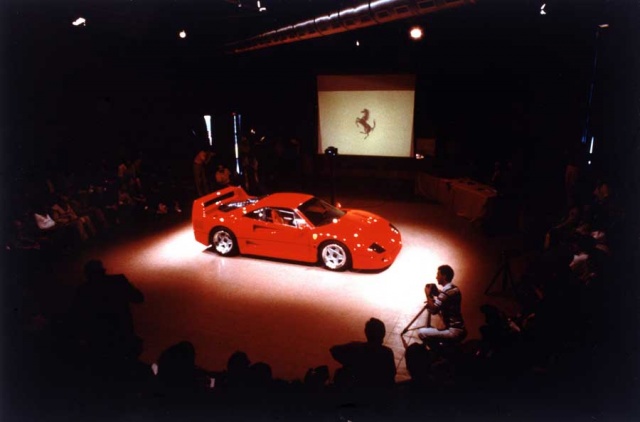 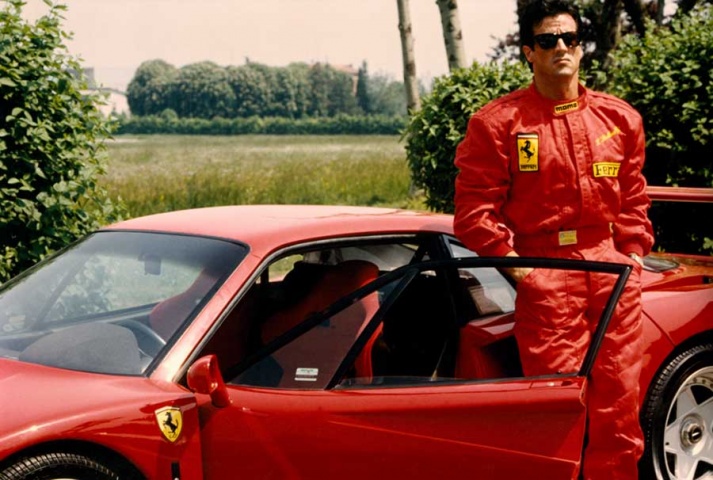 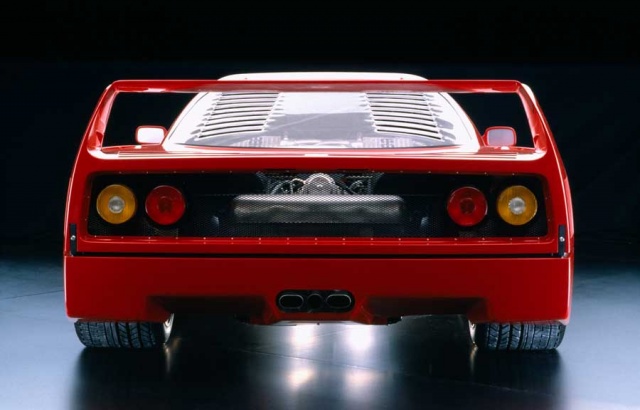 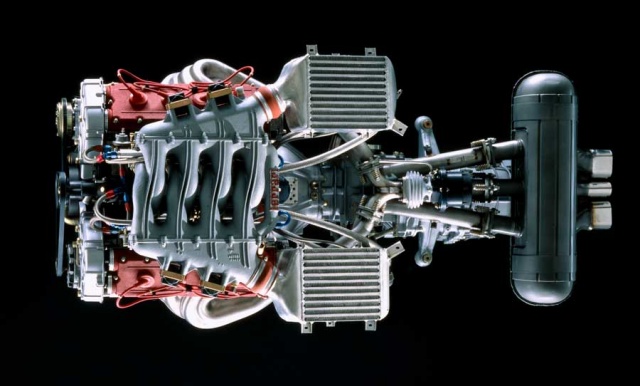 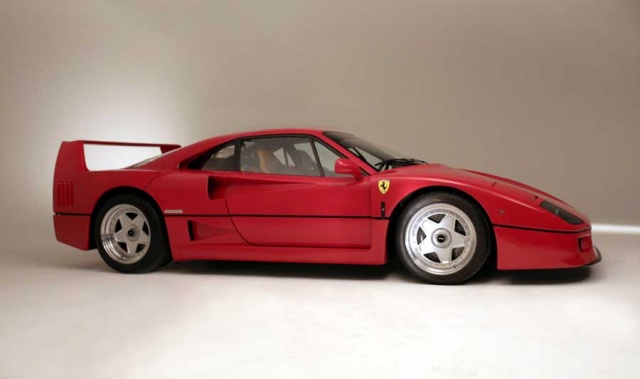 Enzo's last Ferrari was Maranello's 40th birthday to itself, and with roots in a forgotten Group B car, it was always going to be wild.

"No, I don't think we have anyone at McLaren who can weld that badly". So said Gordon Murray, upon fielding a question as to whether his McLaren F1 was intended to be a rival to the Ferrari F40. A disparaging remark, yes, but he had a point. Spend a few minutes in the company of an F40 and you'll understand. Panel gaps that you could fit your fist through, welds that appear to have been done by a blind person and a steering wheel raked at an angle similar to that apparent in the original Mini. Or a bus. Fit, finish and ergonomics were clearly not on the list of priorities for this car. Excitement and performance were though, and how. The F40 is one of the most exhilarating Ferraris ever made, and by proxy has to be one of the most exhilarating cars ever made, period.

Look at the shape, the tiny size, the lack of any superfluous details. The low nose ready to devour the road. The wide, five-spoke, centrelock-equipped wheels that pack the arches. NACA ducts optimised to ram air into the hungry intake and cooling systems. The pram handle-like rear wing designed to squash the broad derriere into the tarmac at speed. Every millimetre screams speed. Every millimetre screams supercar.

The design and development phase was condensed into a frantic 13-month flurry of synchronised chaos, with work on the chassis, bodywork and powertrain all taking place simultaneously. The F40's roots lay in the stillborn 288 GTO Evoluzione, a 650hp monster of which only five were built. By comparison, the F40 officially had 'only' 478hp, although it's now widely reckoned that no car ever left the gates of Maranello with less than 500hp. Remember, this was 1987, and to go much faster you'd have needed a vehicle with Boeing written on it.

Composite materials were chosen for the aerodynamic body, the rear clamshell over the engine opening as a single, almost comically large piece. Double-wishbone suspension attached to the tubular steel frame, and the use of magnesium for components such as the sump and bellhousing between the engine and gearbox took inspiration from the Prancing Horse's racing cars.

Ermanno Bonfiglioli, who was Head of Special Projects at the time, recalls its launch on July 21st of that year: "I have never experienced a presentation like that of the F40. When the car was unveiled, a buzz passed through the room followed by thunderous applause. No one, except for close associates of Enzo Ferrari, had yet seen it. Indeed, the company had cloaked the development and testing of that car in unusual secrecy. And the surprise at such a stylistic leap was almost shock."

In Stuttgart, Porsche was busy with its 959, a machine designed to both compete in Group B motorsport and act as a rolling laboratory. Many contemporary tests pitted this technological tour de force against the F40, but they could scarcely have been more different. At the time, most journalists gave the Porsche the nod. Nowadays, as supercars feature less and less of the analogue, buttock-clenching lairiness of the Ferrari, it's this Maranello masterpiece that really captures the imagination.

OK, so a current Golf R will beat it to 100km/h. Many cars since have eclipsed its 320km/h-odd (depending who you believe) top speed. That's the inevitable march of progress. What makes the F40 so special is that it has no driver aids, no power steering and no servo assistance for the brakes. Also on the list of things it doesn't have are a radio, door handles, a glove box, carpets or any modicum of creature comfort. This means less mass for the twin-turbo, 2.9-litre V8 petrol engine to push around, and push around it does. Nothing much happens until those two IHI turbines spool up, then the gates of hell open and suddenly your million-euro Ferrari is lighting up its rear tyres in fourth gear. And it's somehow still accelerating at a barely-abated rate. Nobody makes anything as mad, as purposeful, or as single-minded as this anymore.

They can't, of course. Regulations tie manufacturers up in knots with distractions like crash testing and emissions and all that other stuff. Stuff that didn't really matter in the hedonistic, shoulder pad-wearing 1980s. They focused on the things that make a car thrilling to drive; things that make adrenaline course through your veins as you use every last ounce of skill to tame the beast. Test driver Dario Benuzzi remembers trying times during the testing phase: "The handling of the first prototypes was poor. To tame the power of the engine and make it compatible with a road model, we needed to subject every aspect of the car to countless tests: from the turbochargers to the braking system, from the shock absorbers to the tyres. The result was an excellent aerodynamic load and high stability even at high speed."

It was a fitting send-off for Enzo, the last car that he would personally approve before his passing. Supercars have evolved since, and offer hitherto unimaginable levels of performance and accessibility for mere mortals with the capital to afford them. The F40 is different, however. You'd better be sure of what you're doing when you push the throttle pedal into that carpetless footwell, because no prisoners are taken. It's a lunatic in a composite suit, and the world is so much the better for its existence, a vivid reminder of times that will never be repeated.

We'll leave the last word to Dario: "We obtained precisely the car we wanted, with few comforts and no compromises. With no power steering, power brakes or electronic devices, it demands the skill and commitment of the driver but generously repays it with a unique driving experience. Steering precision, road holding, braking power and intensity of acceleration reached unmatched levels for a road car."