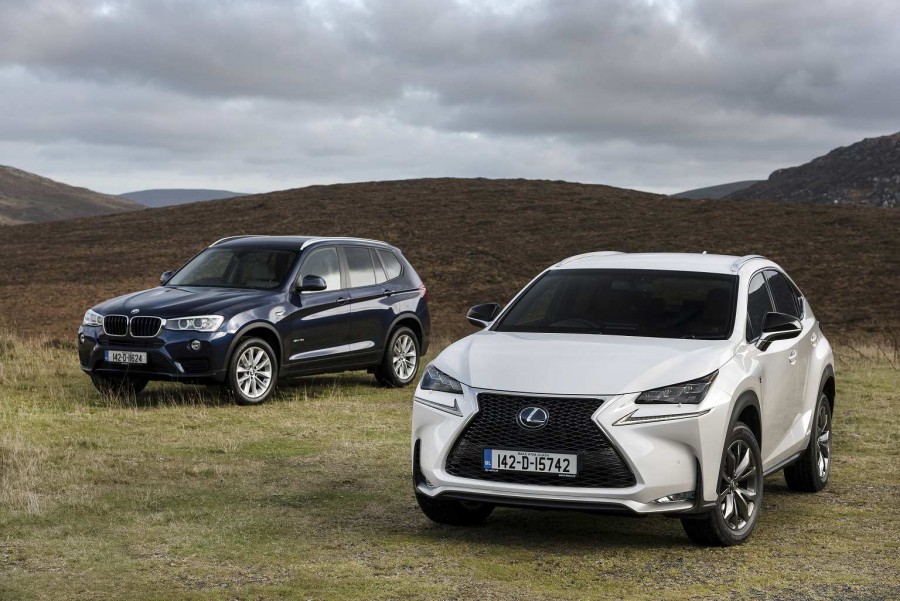 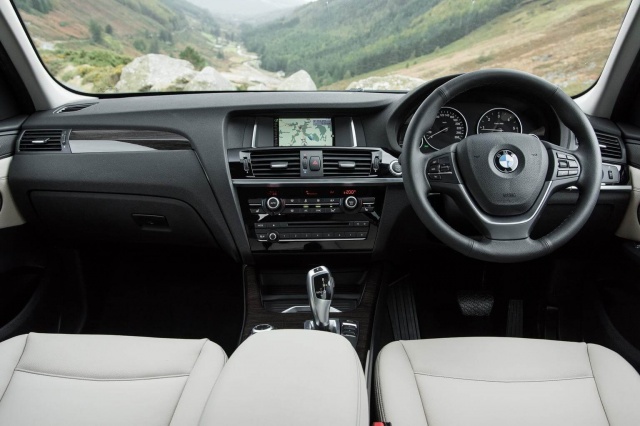 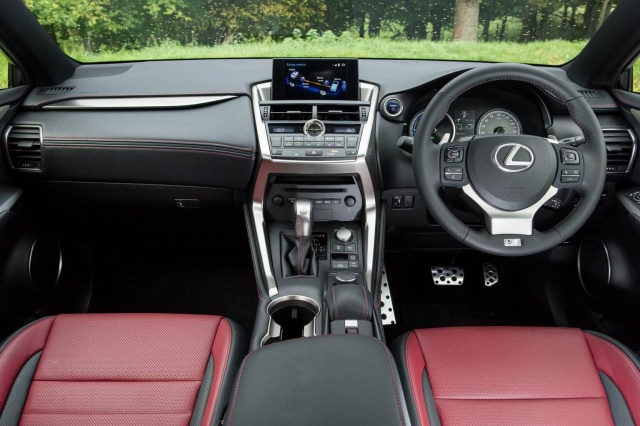 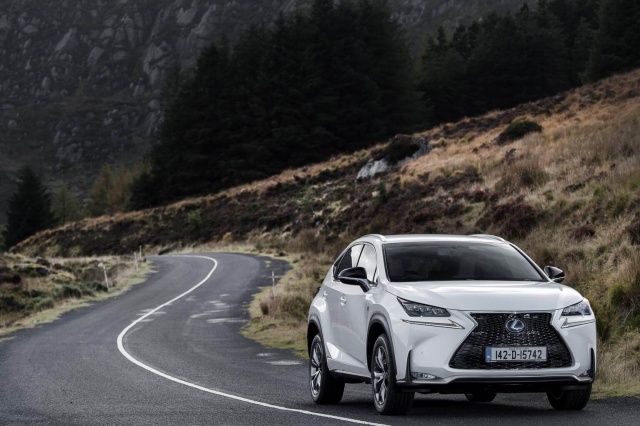 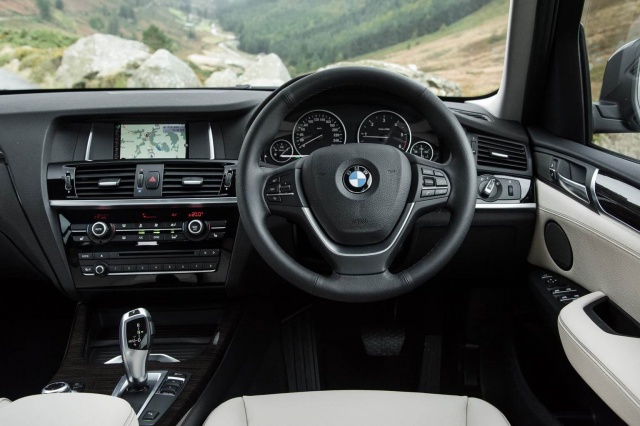 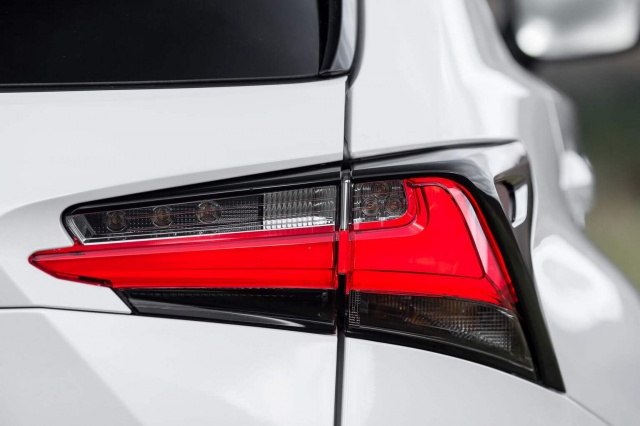 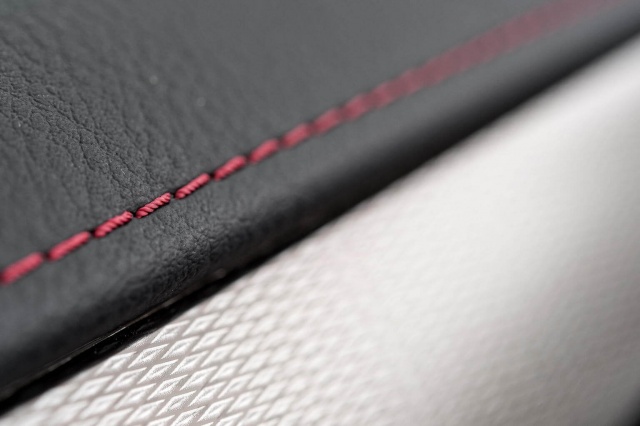 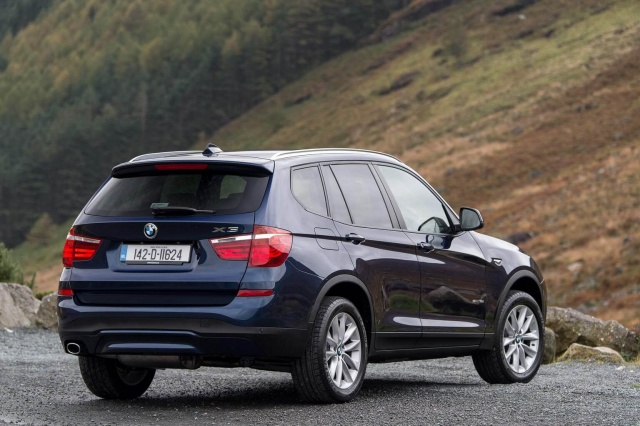 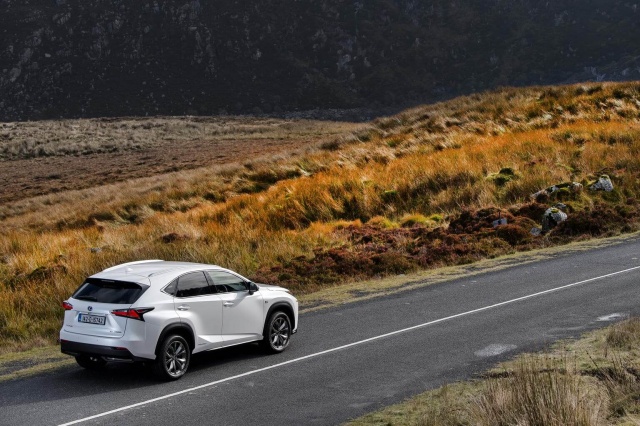 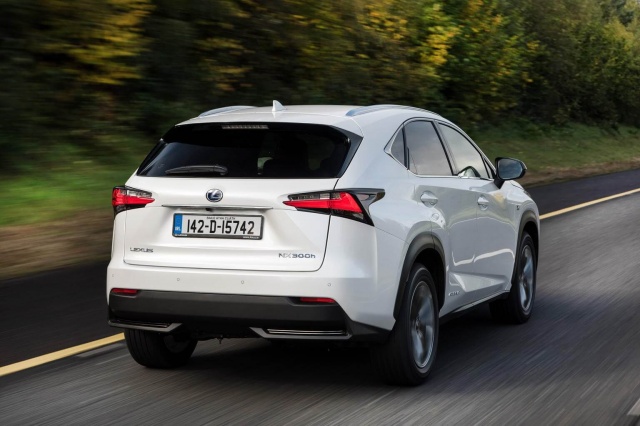 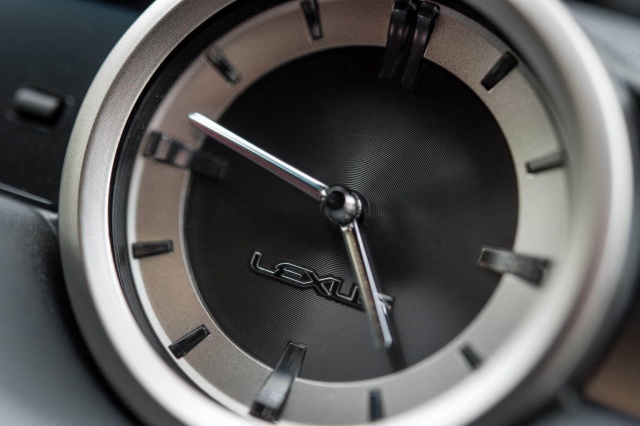 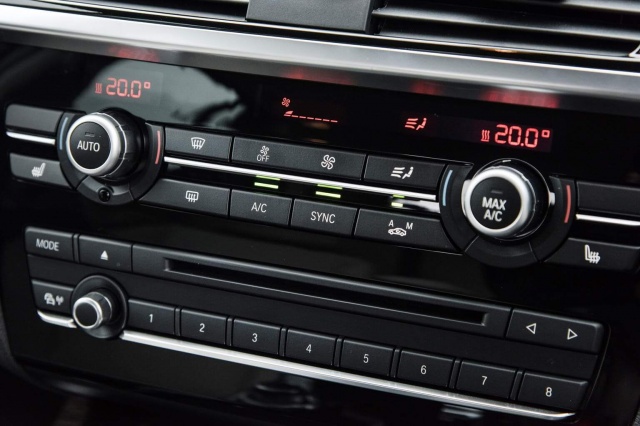 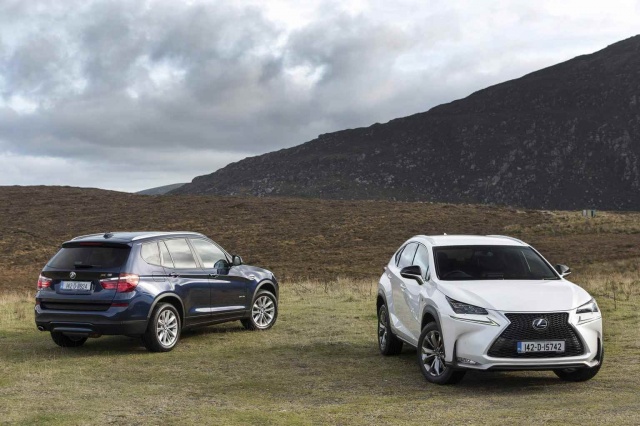 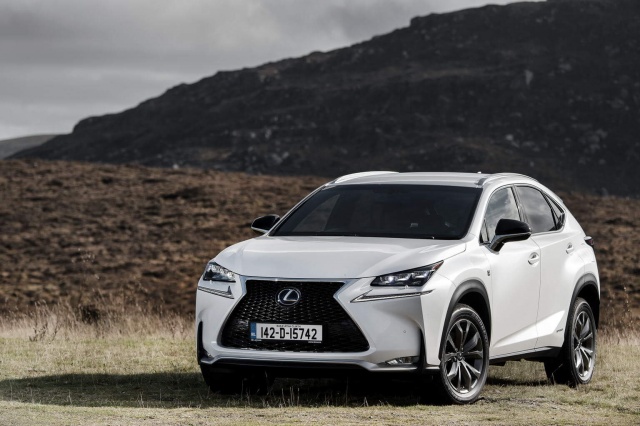 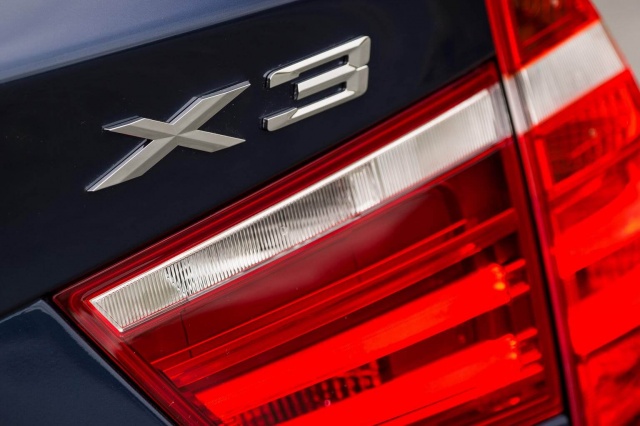 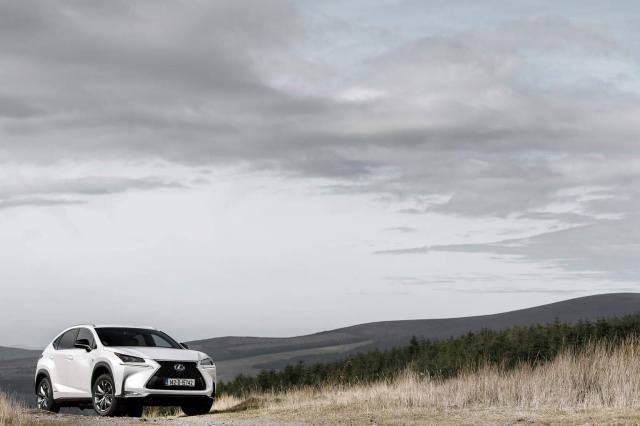 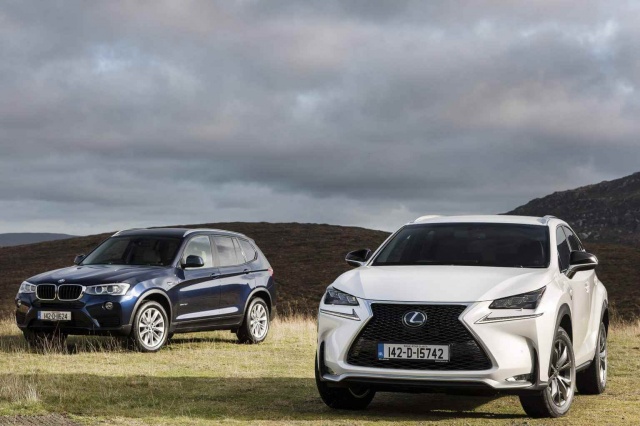 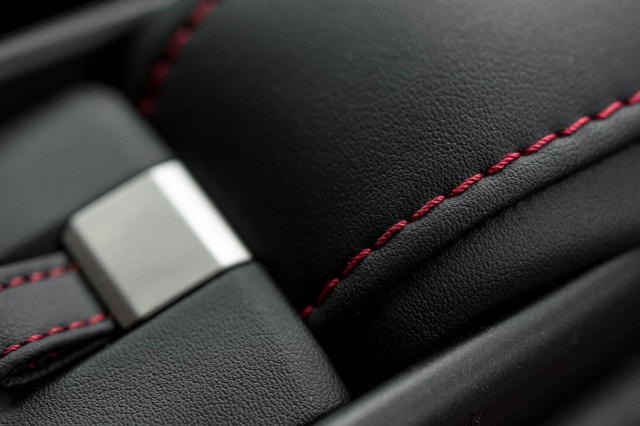 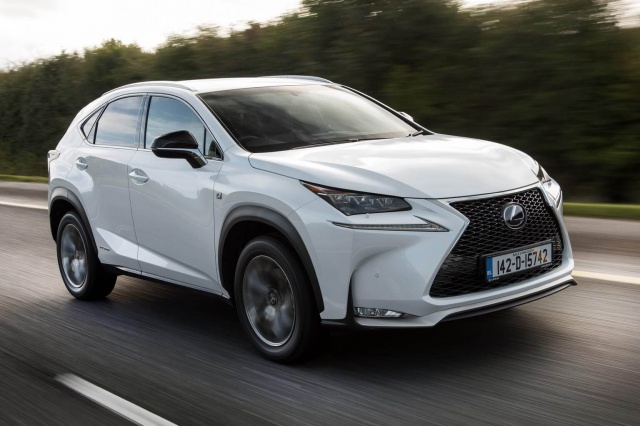 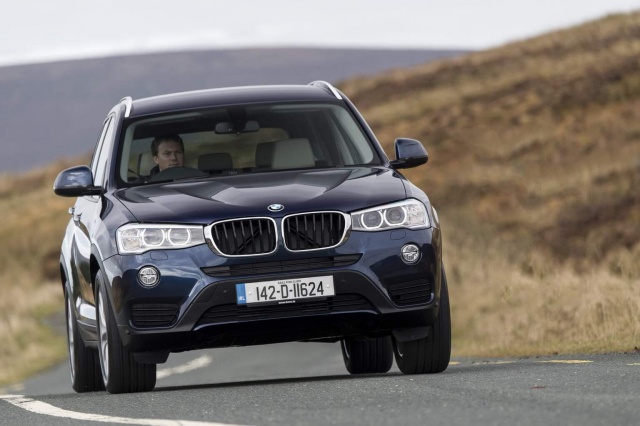 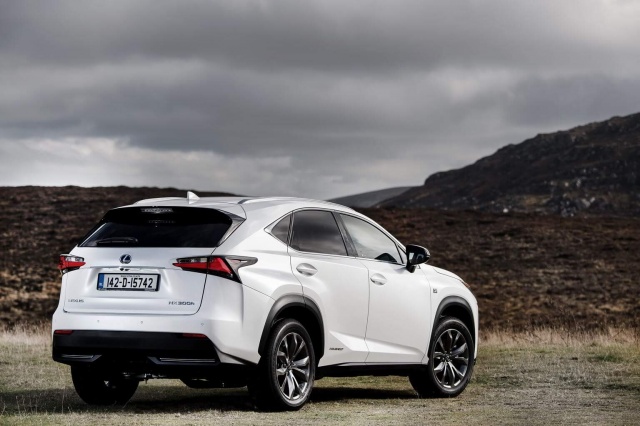 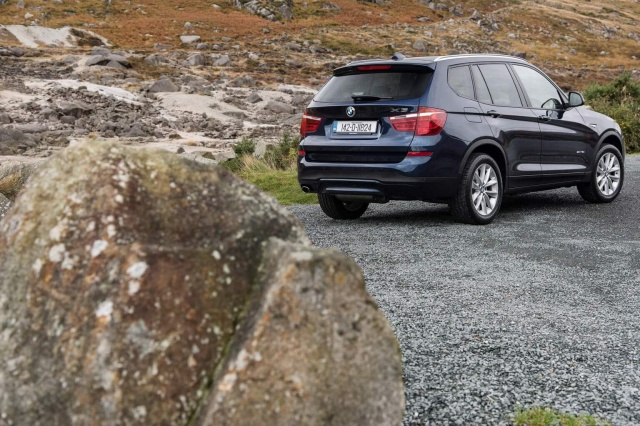 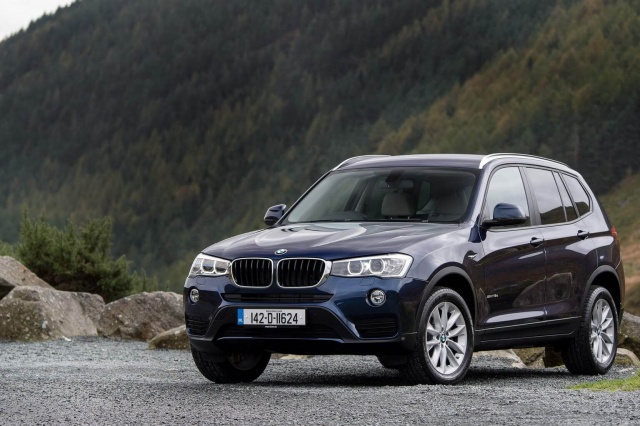 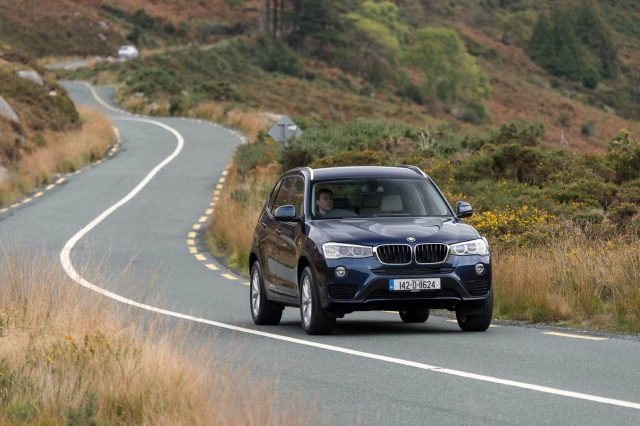 C'mon, can a posh Toyota with a hybrid powertrain and a CVT really knock the king of the compact luxury SUVs off its perch?

Well, the Lexus certainly wins this round. OK, I accept that not everyone is going to utterly love its multi-angled, sharp-edged styling, and that big gaping grille with its 'spindle' fangs is as divisive as a film by Lars Von Trier. But, just as with controversy-baiting Lars, we can't fault the Lexus for trying. Being as its major German rivals are maxing-out on mundane styling, the only thing to do if it was to be given any sort of airspace at all was to go different. Very different. The finished article looks as if a conventional soccer-mom SUV has had an argument with a Lockheed F-117 Stealth Fighter and it's not entirely clear which won. Personally, I really love it - it looks rather mean and commanding, and far more interesting to the eyes than the BMW's shape. Plus, its detailing is fabulous, from the way the rear lights sweep into the fenders in a delicate boomerang shape to the subtle LED highlights of the daytime running lamps at the front.

The BMW strikes back with a sort of sturdy conventionalism. Like matching a nice jumper with sensible slacks, you're never going to set off the fashion alarm klaxons, but neither are you ever going to go out of style. It's in marked contrast to the far more edgy styling of the first generation X3, but while this mildly-updated version of the second generation car may lack the drama of the Lexus, it's well-balanced and handsome, though would compete better on visual terms with the NX pictured here if it was the M Sport version.

Inside, the positions are the same. The BMW is exactly what you expect. There is an acreage of cream leather, brown wood and the same clear, concise dials you get in a 5 Series. Or a 3 Series. Or a 1 Series. You can see where I'm going with this. As with Audi, BMW's cookie-cutter approach to expanding its niche model line-up has created a sort of peak familiarity. Like Billy Connolly's gag about Mexican food being all the same, just folded differently, there's a dragging sense that we've seen this all before, albeit it's as well-executed and beautifully finished as you'd expect.

The Lexus almost manages to match the excitement of its exterior styling on the inside. Much is lifted from the IS 300h saloon, and that means everything is very, very well made. Hefty in fact. You can sense the intensity of the engineers in Tokyo who designed and made every switch. The fact that Lexus has, some years back, kicked its bad habit of recycling old Toyota Avensis switches, means that the whole thing manages to look and feel a little more bespoke. It's a matter of perception of course - Lexus re-uses interior components just as much as BMW, but it does so across a smaller, lesser-seen model range, so the sense of individuality is heightened. I love the touch-sensitive sliding heater controls too - they take a little bit of getting used to, but once you've mastered them you wonder why other car makers still persist with buttons and dials.

Where the Lexus falls down is in its infotainment system. The company has been refining its mouse-point-and-click setup for some time now, but the sad fact is that it's nowhere near as slick or as clever as BMW's thoroughly matured iDrive system. The BMW's crisp, clear screen looks as if it was designed by a cell of refugee Apple coders. The Lexus' menu looks like someone from Dell threw it together on a lunch break two or three years ago. It works OK, but that's the best that can be said of it.

In terms of comfort and accommodation, it's a split vote - the Lexus has the more comfortable front seats and a nicer driving position, the BMW has a little more room in the back (although it's impossible to get three people sitting comfortably abreast in the rear seat - shameful for a car purporting to be a practical SUV, and the Lexus is no better in this regard) and a touch more space in the boot.

If you're expecting this to be a walkover for the BMW, you're wrong. Now, we all know that the Ultimate Driving Machine tagline has a solid grounding in reality and there's no doubt that even though it's tall and long, the X3 maintains BMW's reputation for providing top-notch steering and handling balance. If you want an SUV that's rewarding to drive, then this is the one you go for.

Well, mostly. You see the thing is that, even though its steering isn't quite so sharp or communicative, I actually preferred driving the Lexus. It's a little hard to explain why, but it's to do with the almost extra-sensory way it moves and shimmies as you drive along. Objectively, you'd have to say that the BMW is the better car to drive, but the Lexus has a gait, a stride that just feels right. It's not better than the Beemer's, but certainly not worse, and it's almost impossible to get across to someone who hasn't driven it, yet something about the Lexus' body language just made me prefer it.

Where the BMW does score a convincing win is in the engine department. It may be a bit too noisy (BMW's N47 diesel loses out badly to Volvo's current D4 engine in refinement terms, never mind the usually-quiet Lexus hybrid system), but the 20d still has easy, creamy power reserves and exceptional fuel economy for something this big and this brisk. You should be able to tease at least 45mpg out of it in daily driving, possibly more if you're being careful and switch the air conditioning off around town, and yet it has deep, fathomless reserves of torque that pick the X3 up and hurl it along through gaps in dawdling motorway traffic. Only above 3,750rpm does that shove start to noticeably fade.

The Lexus' hybrid setup is a far more mixed bag. There is a lot of good stuff going on here, and I feel far more positive about it than I have done about previous Lexus or Toyota hybrid drives, but the fact is that it's much harder to get the best out of it.

Fuel economy is the first hurdle. It's better in the NX than I would have expected, but mid-thirties to low-forties-mpg, well shy of the official 55mpg figure, leaves it trailing the BMW. Second, of course, is the ever-hateful CVT gearbox that too often leaves the engine revving too high and making too much noise as you try to gather speed. It's less of a problem with the torquey 2.5-litre engine here than it is with the 1.8-litre unit in the conceptually similar Toyota Prius, but it's still a lousy way to run a railroad, so to speak. I'm sure Lexus' engineers could point me to a sheaf of research that shows the CVT is more efficient and more economical than a twin-clutch or a conventional auto, but I don't care; it's always been the Achilles' heel of Toyota and Lexus' hybrids and that hasn't changed here.

The sound 'symposer' is a bit of a love/hate device too. It only kicks in when you select Sport mode, and tries to convince you, by playing engine sounds through the stereo, that there's a deep-chested, multi-cylinder engine doing the power work up front. Often, it's quite convincing, even faintly amusing, but occasionally you catch it falling out of sync, and you hear the mooing and revving of the 2.5-litre four-pot, being catapulted to the top of its rev range by the awful CVT.

Still, the Lexus can play a massive refinement card over and above the BMW, especially around town where you can spend surprisingly long periods of time wafting around on electric-only power. The BMW's diesel is just too aurally intrusive, especially in city driving.

Speaking of city driving, make sure you don't go for the optional sports suspension unless you've tested it in all environments. Pretty much every BMW is at least firmly sprung, but the shorter springs and lower ride height of the optional suspension make the X3 unnecessarily harsh, especially around town. A standard-spec X3 is far more pliant and forgiving.

The Lexus in this F Sport spec is actually slightly more expensive than the X3, but it is better equipped as standard, and you'll have to spend a good bit more to get the BMW's spec to match. Plus you could have an Executive AWD model (slightly less sporty but pretty much as well equipped) for around €5,000 less before you start loading options into the BMW. Plus there's the added consideration that Lexus has an unrivalled reputation for reliability and longevity, something that BMW, for all its technical genius, can't quite match.

I'd have the Lexus. I accept that its drivetrain is nowhere near as slick as that of the BMW and that I'll be shelling out a good bit more for fuel, especially if I'm making any regular motorway journeys. But the €5k I'd save (if I could stay away from the F Sport version) would cover an awful lot of that cost, and I just kind of prefer the Lexus' mien. It has a gorgeous interior, I think the exterior styling is as handsome as it is brave, it's wonderfully comfortable and just a bit left-field.

The BMW is a terrifically slick, finely honed product, almost perfectly aimed at the centre of the well-heeled family market, but it just leaves me a bit cold. It's a very good car, but not one I found myself falling for.

I don't agree with Neil's summary here, though the NX gets closer to the X3 for me than I expected. Starting with the exterior styling, there's no doubt that the Lexus is the more interesting looking and it can look fab in F Sport specification from certain angles, but equally it can look simply awkward from others. The X3, admittedly, is restrained to the point of boredom, certainly in SE guise. It's far more interesting in M Sport spec.

While I love aspects of the NX's interior and how it'll probably feel just as special inside in 20 years' time, I really can't get on with its infotainment interface, whereas the BMW iDrive system is an intuitive joy to use. And the X3 is notably more spacious and practical. Though to make the BMW's cabin feel as special as that in the Lexus you need to spend a lot of extra money.

Much of this is quite subjective, but even putting all that aside, my clear cut decision is to take the BMW over the Lexus - and it boils down to the driving experience. The chassis is more fluid and balanced and there's a sense that you're actually driving the car rather than just steering it approximately in the direction you want to go in. Any turbodiesel engine with a conventional automatic gearbox is more satisfying to drive than the hybrid system and CVT in the Lexus. Not everyone cares about such things, but I certainly do and it's a deal-breaker for me and the Lexus. That's a shame, as, even though the X3 performs better than the numbers suggest it will, its engine is loud and quite uncouth next to the NX. And of course, if you're only driving in town then you should go for the Lexus with its electric-only capability. The Lexus no doubt comes with a gold star ownership experience too, but it's just not for me.