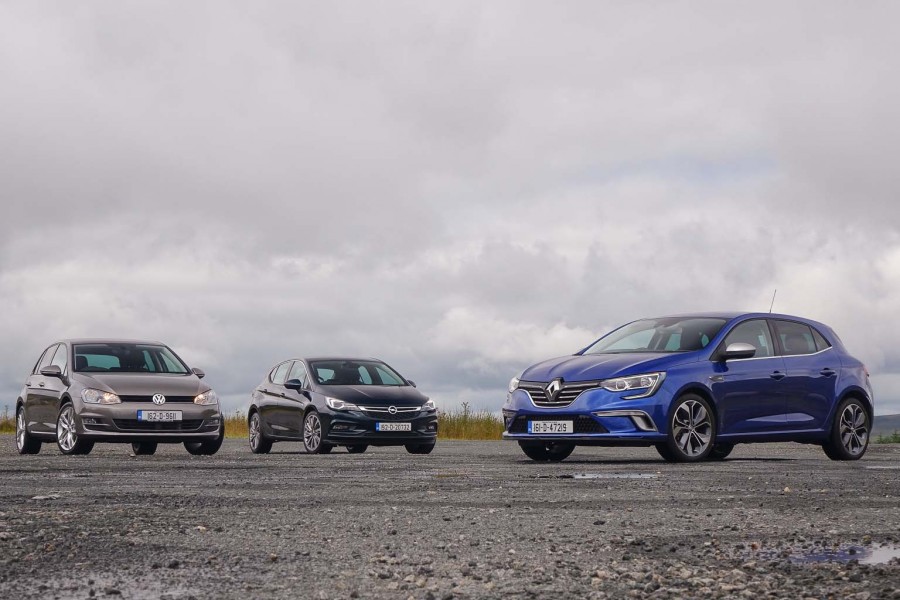 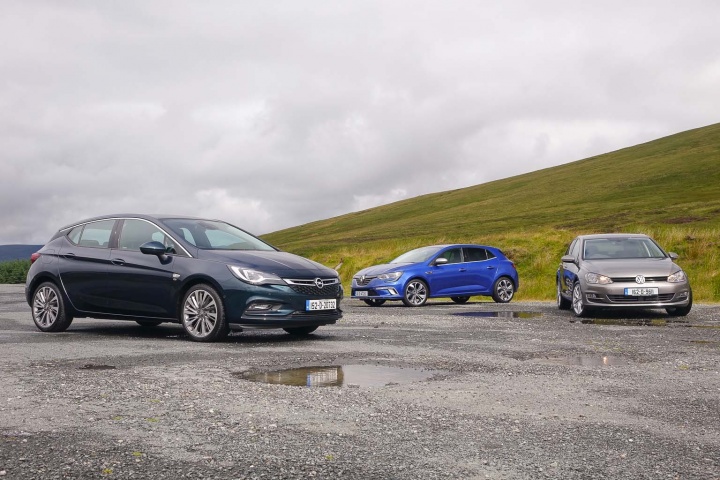 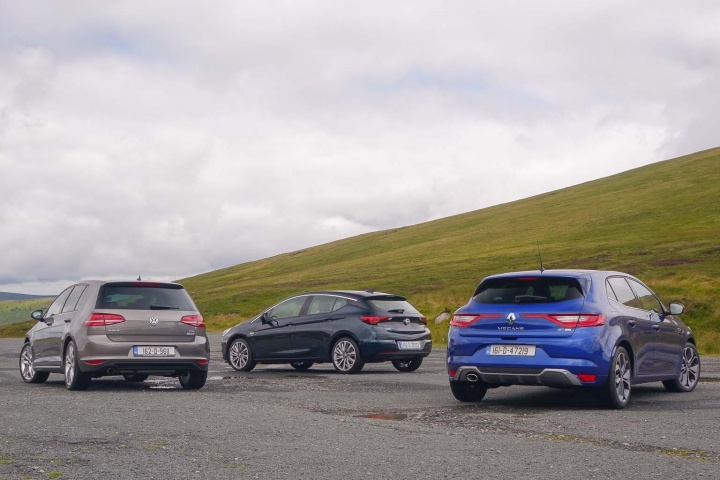 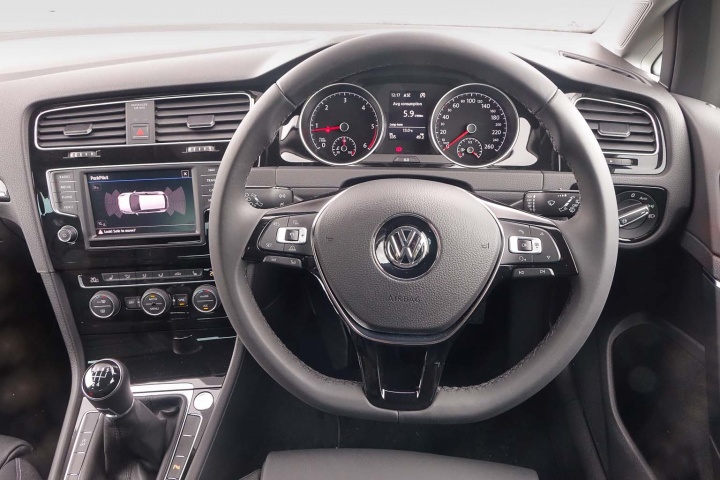 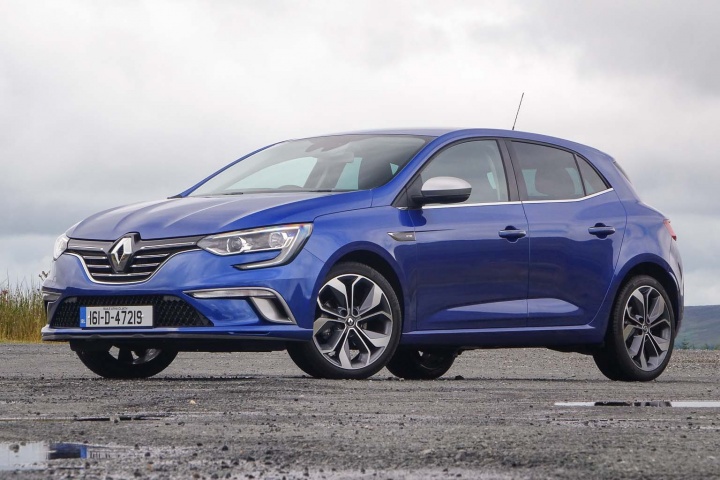 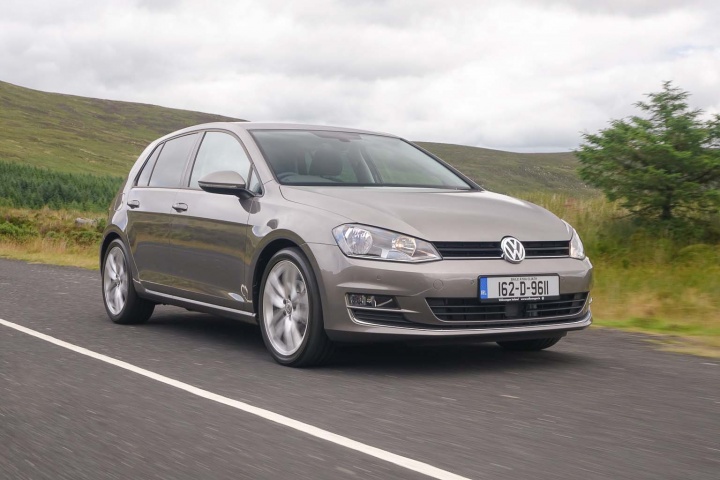 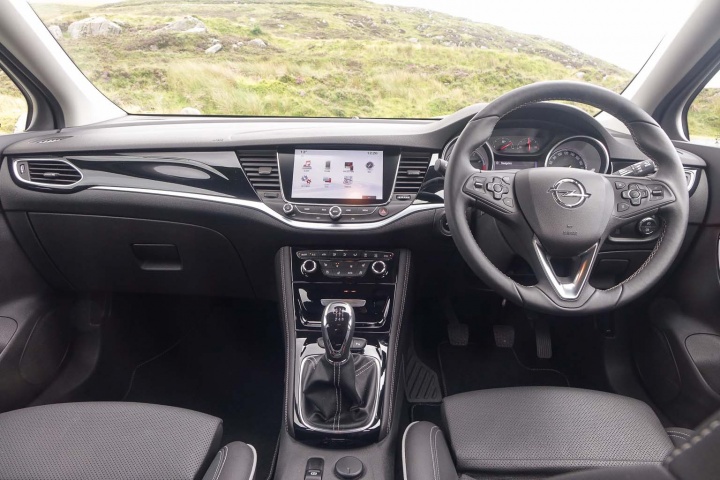 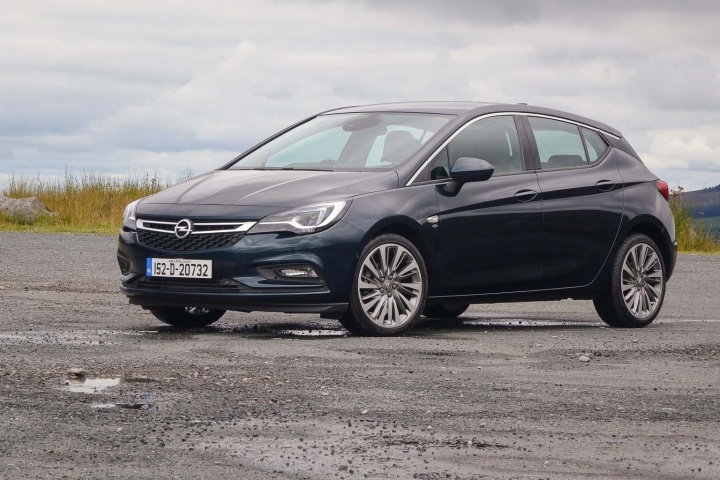 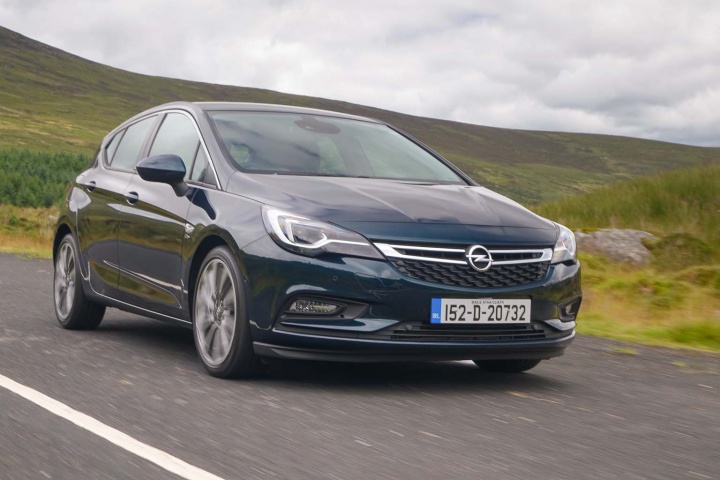 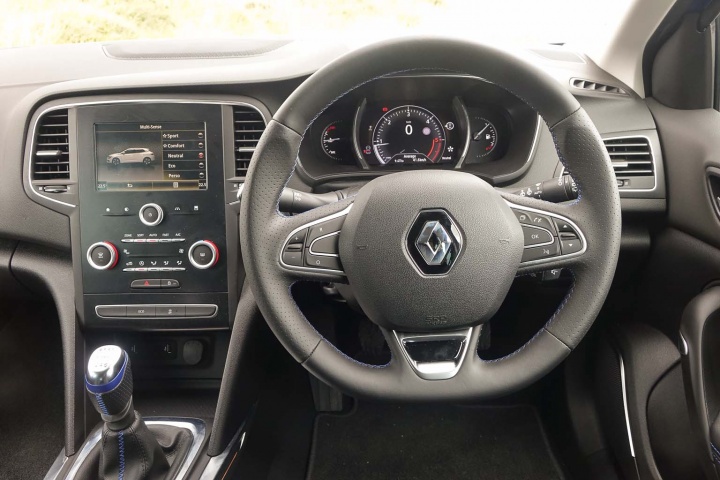 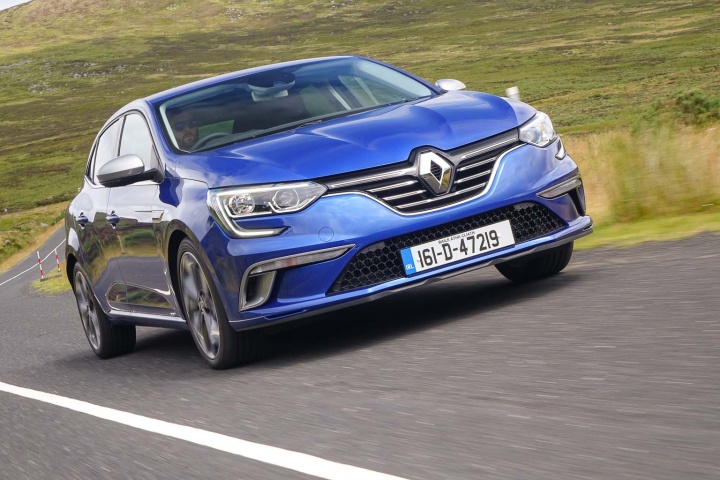 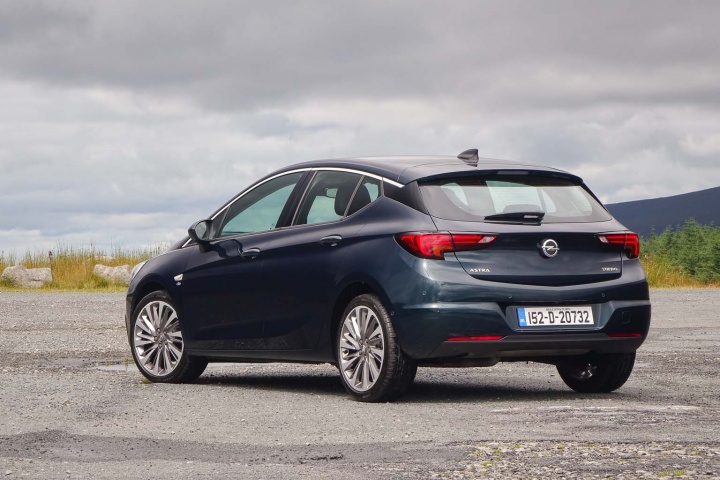 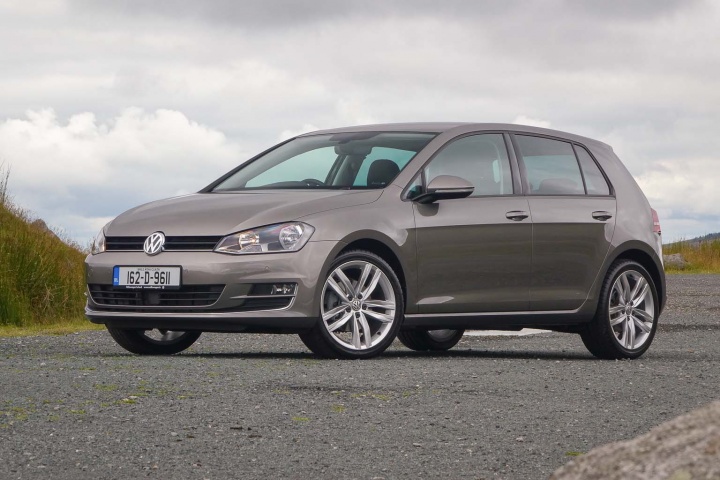 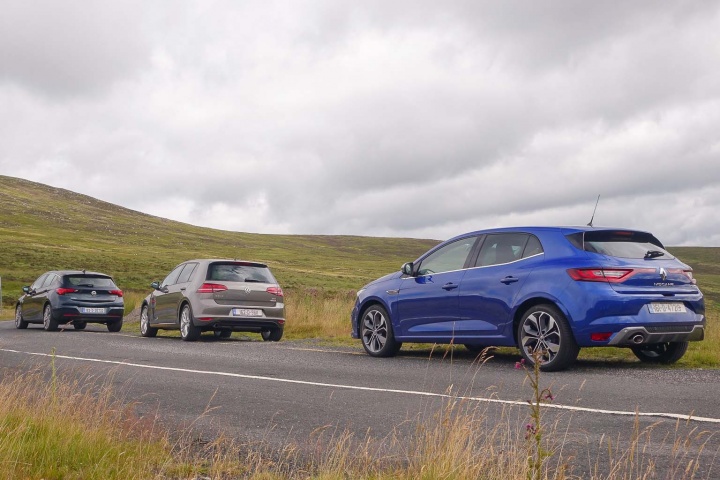 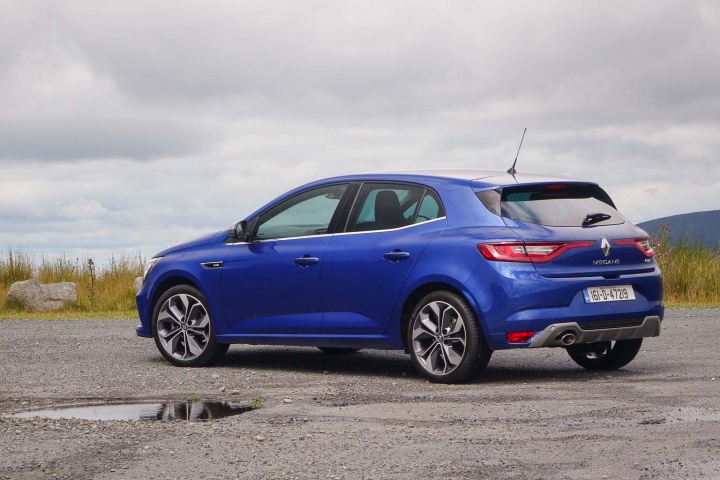 The brand new Megane takes on the evergreen Golf and the understated Opel Astra.

The mid-size hatchback was once the family car of choice, but it has been coming under increasing competition from the burgeoning crossover and SUV segments of late, as evidenced by the rise of the Hyundai Tucson to the top of the sales chart this year. Nonetheless, the C-segment remains a highly competitive sector in its own right, with manufacturers increasing equipment and refinement to vie for buyers' attention. For this triple test we gathered together the brand new Renault Megane, Opel's Astra and the Volkswagen Golf, each in their highest specification levels.

Of our three, it is the Volkswagen Golf that is the oldest, although its conservative styling has meant that the years have been kind to it and it remains one of the biggest sellers in Ireland. That's despite little revision since 2012. In Highline specification it is generously equipped and the finish and quality of the interior still sees Volkswagen as the brand to beat, comparing well to cars from premium manufacturers such as Audi and BMW.

Both the dashboard and centre console in the Golf are well laid out and easy to read and navigate. As standard on this trim level you get the Discover Media infotainment system, which consists of a fast-reacting 6.5-inch colour touchscreen with satellite navigation. An additional ‘Innovation Pack’ upgrades the standard 17-inch wheels to larger 18-inch rims, tints the rear LED lights and adds Android Auto, Apple CarPlay and MirrorLink smartphone connectivity, all for a very reasonable €162 premium.

With the exception of the button-filled multifunction steering wheel, the interior of the Opel has the simplest design and feels spacious. If you’re familiar with Opels of the past, you will notice how much more upmarket the interior now looks and feels. Standard on Elite specification are Opel's new Ergonomic Sports-Style front seats. It has made quite a fuss about these as they have received AGR approval (a German campaign for healthier backs). Clad in perforated leather, they offer excellent support and 18-way adjustment, along with seat heating and ventilation.

All three cars here can accommodate three passengers in the rear and all have two ISOFIX points. The rear seats in each have a 60:40 split and fold down reasonably flat. Renault leads the way on boot space, with 384 litres growing to 1,247 litres. The Golf is second with 380 litres, but does offer slightly more when the rear seats are folded at 1,270 litres. While the Astra may be ranked third, it’s not by much at 370 litres, while its maximum capacity is 1,210 litres.

When we first drove the new Renault Megane GT we were impressed by the large portrait-style touchscreen that operated the infotainment system. In Ireland it's a €370 option on GT Line (only standard on the range-topping GT), though there is a seven-inch touchscreen as standard. Whilst Renault has made the new Megane look much sharper on the outside, inside it struggles to look anything but drab in a sea of black plastic. Quality has improved, but only just. Flashes of blue across the dashboard and in the stitching serve to remind you that you’re in the GT Line car, but the interior’s overall style isn’t as impressive as the exterior. Like the Opel, the Megane’s seats do cosset, but feel much sportier than the others.

On a more positive note the Renault is refined on the move. Despite the presence of the relatively old 1.5-litre diesel engine the noise suppression is the best of the three. It’s noticeably quiet. Performance-wise there is little to separate these three cars when powered by their 1.5/1.6-litre engines (eagle-eyed readers may spot that the Astra in our images is actually powered by the turbocharged 1.4-litre petrol engine, but we've all driven the 1.6-litre diesel too). Both the Opel and Renault benefit from six-speed manual transmissions whereas the Volkswagen makes do with a five-speed manual gearbox. It really could do with a sixth ratio. On paper the Volkswagen ranks third in terms of fuel economy, but only by 0.2 litres/100km, yet it also has the largest fuel tank at 50 litres - compared to 47 in the Renault and 48 in the Opel - so in reality there won't be much in it in terms of range. On the move it is the Opel that feels like the most accomplished and polished all-rounder. It rides the bumps effortlessly and with a damped quality that was previously the exclusive reserve of the Golf.

In town each car demonstrates plenty of manoeuvrability, with good turning circles and all three are within a few centimetres of each other when it comes to size. All feature rear parking sensors, but only the Volkswagen comes equipped with a reversing camera as standard at this trim level.

When you tackle more free-flowing and winding roads the Astra’s star qualities really begin to shine through. On all manner of surfaces, it highlights its refinement right up through the chassis. There’s an agility and sharpness to it that just isn’t there in the other two cars. Yes, the Golf is nearly as enjoyable to drive, and its interior quality will justify the marginally higher price, but dynamically it comes home in a close second place to the Astra with the Megane lagging a little further behind.

Given how much sharper the new Renault Megane looks we expected it to perform better, especially against older cars like the Golf. It remains a good car and is worth noting that it is a significant improvement on the previous Megane, but it just doesn’t top the two Germans. Since its arrival in 2012, the Golf has generally been acknowledged as the benchmark in this class, and it remains one of the very best, but the fresher, sharper Opel tops it overall.

Dave and I are in agreement on the outright winner here: the new Opel Astra is a real winner. The Megane grabs your attention with its striking exterior design and it is exceptionally refined in terms of keeping unwanted noise at bay, but I expected more from the driving experience and, actually, in terms of practicality too. Only when driving the three cars back-to-back and moving directly from one to the other a few times did it become apparent that the Renault is actually the smallest feeling in the cabin, especially the rear. The Golf isn't bad back there, for two passengers in any case, but it's the Opel that has the most spacious rear cabin. Up front, the Astra is far better than it used to be, though the Golf probably still shades it for perceived quality, even if it is an unexciting design.

The Golf is at its best in the more expensive 2.0-litre TDI guise, but the Astra is spot-on in 1.6-litre diesel spec, mixing decent refinement with plenty of urge and good economy - though we found little difference in the three of them on that regard. So in terms of the practical stuff, there's not a wide gulf between the three cars, but for me, the deal-clincher is the driving experience, even in mass-market cars such as these, and the Astra really has the sweetest chassis of the three. It's supple and comfortable over poor roads, yet it's incredibly agile, very controlled and actually quite a lot of fun if you're in a hurry and there are some interesting corners to tackle. The Golf is a polished product, but it can't engage the driver in quite the same way as the Opel does. It's not the only reason the Astra is our winner, of course, but it's the one I'd want to own.