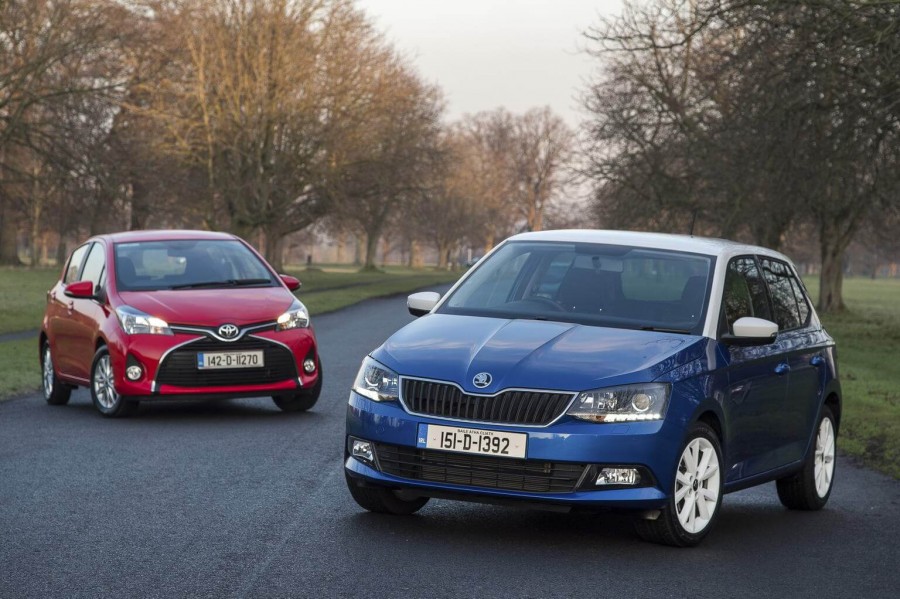 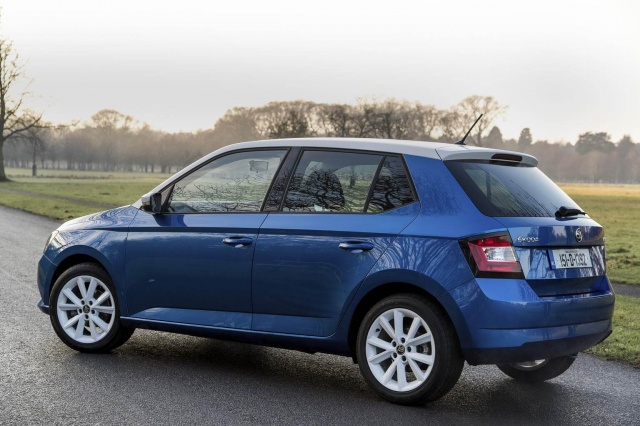 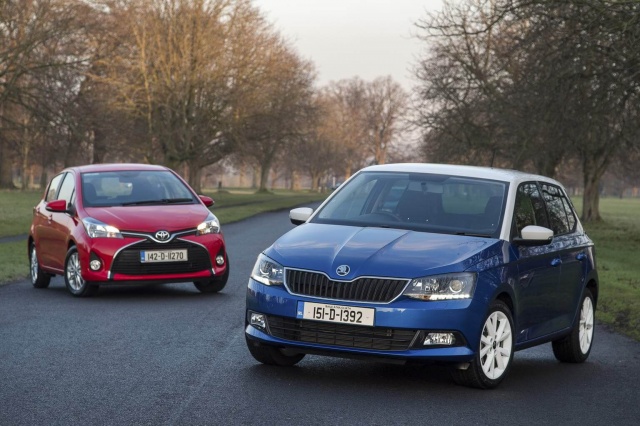 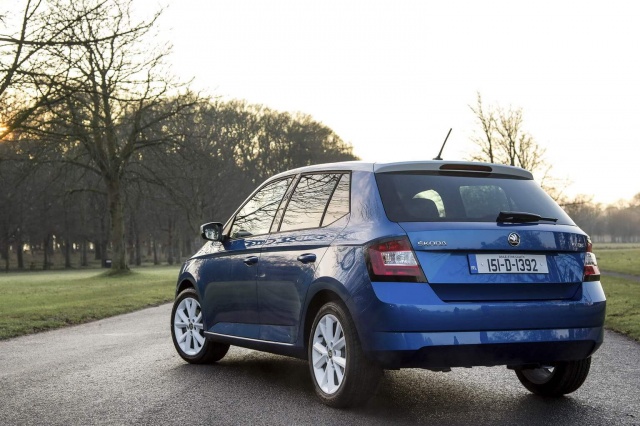 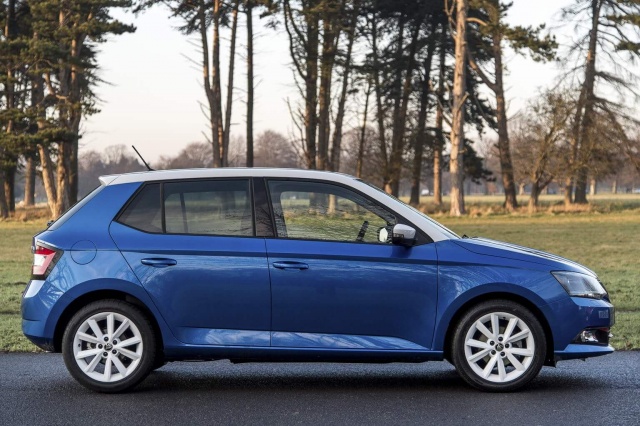 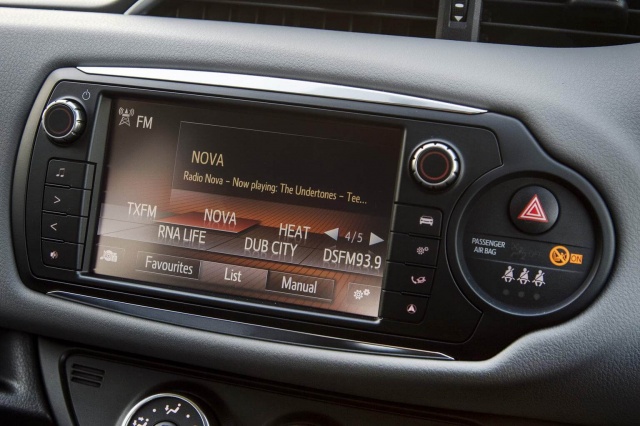 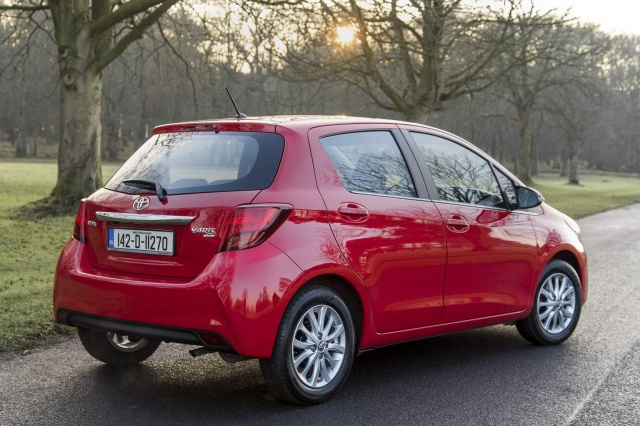 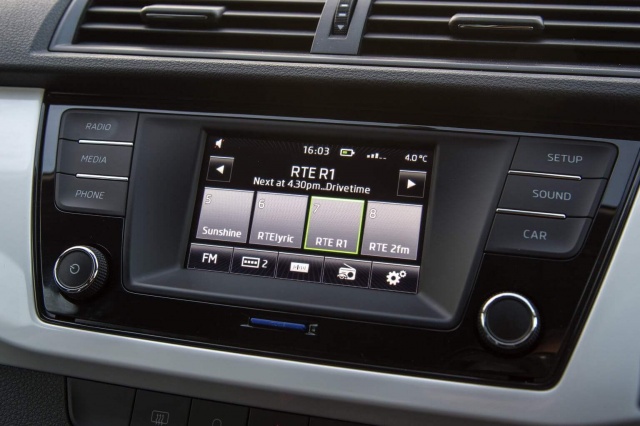 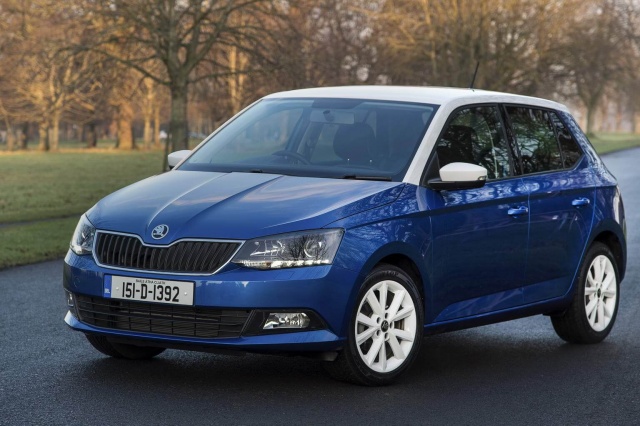 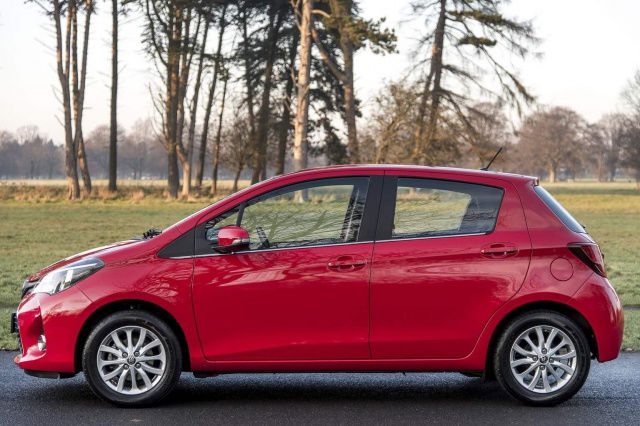 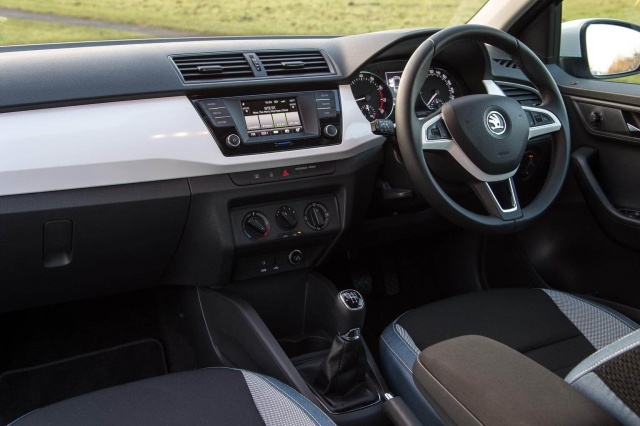 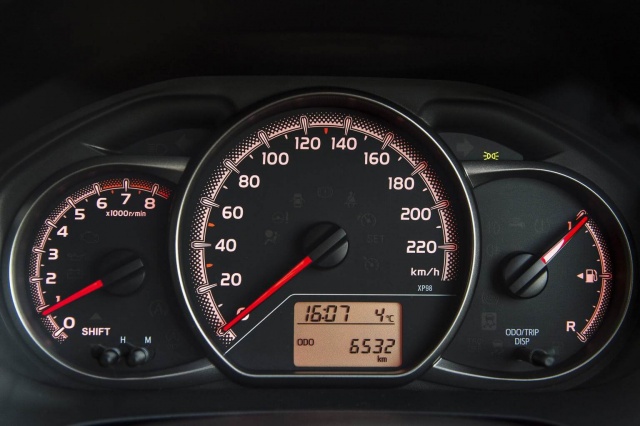 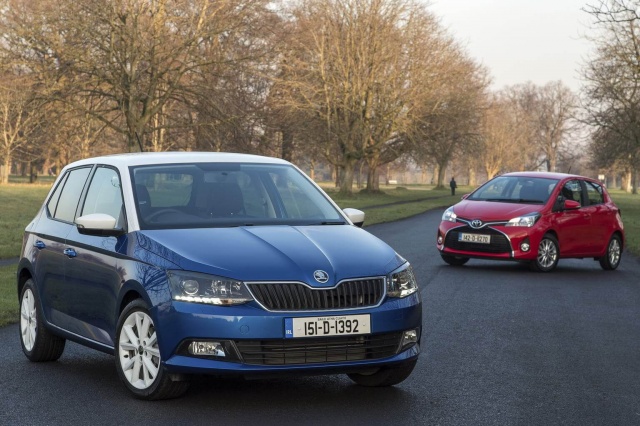 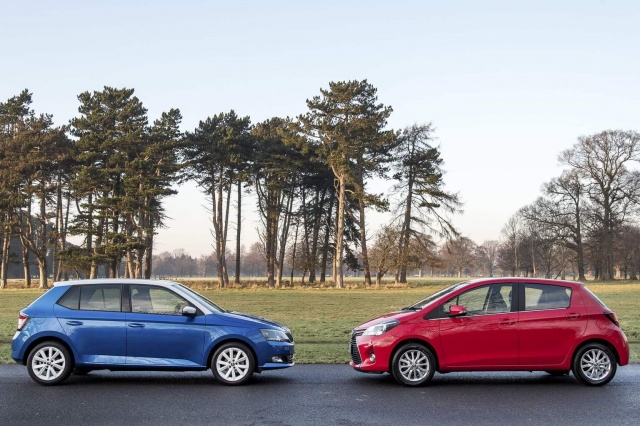 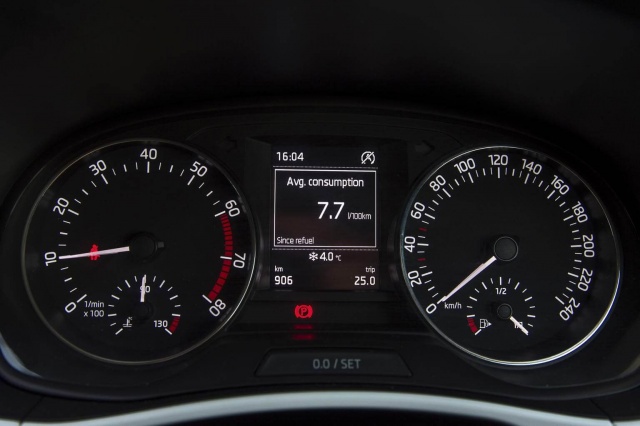 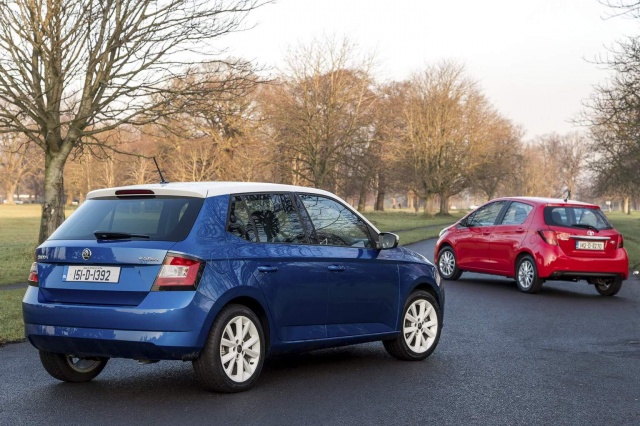 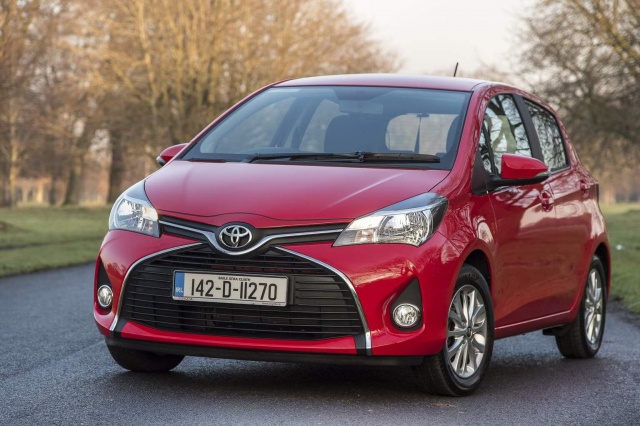 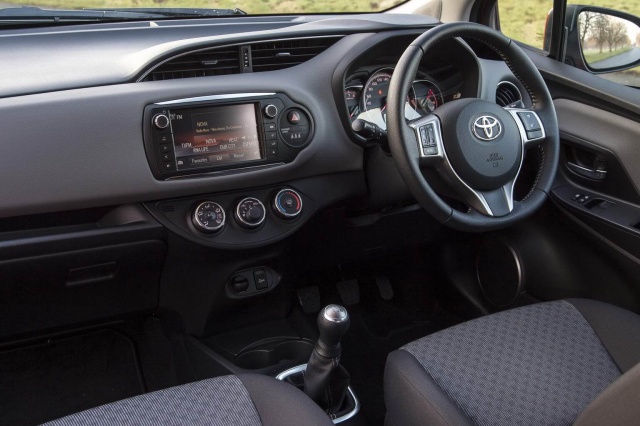 The reliable old Toyota Yaris has to face an onslaught of contenders these days, including this pup, the impressive Skoda Fabia.

The reliable old Toyota Yaris has to face an onslaught of contenders these days, including this pup, the impressive Skoda Fabia.

When these cars first arrived in Ireland they were two very different propositions. The Toyota Yaris was cute and quirky looking, featuring a centrally-mounted dashboard display. It cashed in on the strong Irish love affair with the Toyota brand and soon became a common sight on our roads. Skoda's Fabia had things a little tougher when it first arrived. The Czech car maker was still recovering from its butt-of-motoring-jokes status and the Fabia was far from desirable in appearance.

Jump forward 17 years to the present day and both cars have come on a great deal. In late 2014 the Yaris underwent a significant model update that saw its looks tweaked with greater changes occurring under the skin. Much of the characteristic styling has been lost over the years since that first model; the latest Yaris now strikes a far more conservative pose. The front of the car has been re-worked to feature a more distinctive design incorporating a larger grille that, in this range-topping Sol model (and all but the entry-level Terra grade), features a chrome strip around it. Continuing the more upmarket look, that chrome strip is also used along the window beltline, while the rear end has been tidied up with new lights and some more chrome garnishes. The end result is a car that looks smart, if a little conservative, but is less instantly forgettable than previously.

Skoda on the other hand has evolved the Fabia into a car that not only looks fresh and sharp but is offered with such a variety of specification options that it is capable of appealing as much to mature buyers who may want a conservative looking car as younger first-time buyers that might want something altogether funkier in appearance. Unlike Toyota, which sells the Yaris in both three- and five-door body styles, Skoda only offers the Fabia is five-door guise (and as the Fabia Combi estate). The five-door setup is more popular with buyers who appreciate the greater versatility. Both cars offer reasonably good levels of space inside. Boot space in the Yaris is 286 litres while the Fabia provides a more generous 330 litres. Drop the rear seats in either car however and you'll get 1,150 litres of cargo space irrespective of which car you choose.

Inside, both models are finished well and exhibit build quality you might not expect from smaller cars like these. However, it is the Skoda that feels the nicer of the two, despite it having a simpler overall layout and design. The perceived quality of the materials and plastics used in the Fabia is also better, no doubt influenced by its sister companies in the Volkswagen Group, making it feel hard wearing and solid. Should you opt for the Yaris' highest trim grade you do get upgraded materials, as well as a touchscreen infotainment system.

Both of these cars perform well on Irish roads, but it is the Skoda that delivers a more involving drive. It sits lower than before giving it improved handling while the suspension works efficiently to keep things smooth. The Fabia isn't a heavy car at 1,153kg and you feel it on the road. On uneven surfaces at speed it can feel a little skittish at times, a fact that isn't helped by the firm suspension. In comparison, the Yaris rides in a more compliant manner despite being a lighter car at 1,040kg. Complementing this is a noticeable reduction in road noise transmitted into the cabin.

In terms of sheer driving performance the Skoda's 110hp engine absolutely trumps the 69hp Toyota unit, which concedes a cylinder as well as a sixth gear. Around town both cars do perform closer than it would appear on paper, but on the open road the Toyota's smaller engine becomes the car's main weak point. Toyota does offer a more powerful 1.33-litre engine that is perhaps a closer match to the four-cylinder unit of the Skoda, but even that engine doesn't feel as sweet to drive as the 110hp Fabia.

Both Skoda and Toyota offer a wide range of differing specifications for their respective cars, but it is the Fabia that steals the limelight with its low starting price of €13,995 for a 60hp 1.0-litre MPI engine. Of course though, like all entry level prices, few buyers are ever going to opt for that most basic of specs. Perhaps the key decider for most will be the engine and despite both brands offering diesel options unless you really do plan on doing a high level of mileage each year we suggest sticking to the petrol engines in a car of this size. The Skoda's 1.2-litre TSI engine is offered in two power levels of 90- and 110hp. Both fall into the same taxation bracket that carries an annual fee of €190 and there's little to separate them in terms of fuel consumption. The more powerful engine does come at a €1,000 premium though, which may be a little too much for some people to see value in, but if you do longer trips we think the extra 20hp makes a noticeable difference.

Skoda offers the Fabia in four different trim lines of Active, Ambition, Style and Monte Carlo, but the Active trim is rather sparse inside. It is only when you make the step up to the Ambition level that you gain 15-inch alloy wheels, Bluetooth, a touchscreen stereo system, LED daytime running lights, a speed limiter function and some Piano Black interior trim panels that help give a classier look to the cabin. In the case of the 110hp 1.2-litre TSI engine tested here, spending a further €1,500 over the Ambition specification will move you up to the Style grade. This brings 16-inch alloy wheels, keyless entry and ignition, electric windows all round, rear parking sensors and height adjustable front seats.

Prices for the Yaris start at €14,995, but if you want the five-door version your starting point is €15,995. Toyota offers a wider scope of models too with four different trim grades - although the entry level Terra model is very basic. The Aura and Luna specifications come in at €16,500 and €16,595 respectively, in the case of the 1.0-litre VVT-i engine. There are only subtle differences between the two. The top level Sol trim adds more exterior equipment in the shape of front fog lights and 12-spoke alloy wheels. Chrome trim along the glazed areas and over the rear number plate brings an upmarket look to the car. Inside, air conditioning comes as standard but otherwise the specification is largely the same as the Luna model. As we mentioned earlier the 1.0-litre Toyota engine isn't a direct rival for the Skoda's 1.2-litre engine in terms of outright performance. That said, the smaller engine does have lower emissions making it cheaper to tax to the tune of €10 a year and according to official fuel consumption figures is the more frugal of the two; however the horsepower deficit may give cause to driving the car that bit harder thus negating any fuel savings.

Both of these cars are far removed from where both first entered the Irish market. Advances in chassis and powertrain engineering as well as improved build quality place both cars on firm ground. It is the Skoda that shines through, even taking the difference in engine performance into account. The Fabia is purely and simply more fun and engaging to drive besides offering a roomier cabin and looks that aren't quite so bland.

I have to agree with Dave here: the Skoda is a far more satisfying car to drive and hence clinches victory - and it's not just because our test car came with a great specification and a more powerful engine. To be fair to Toyota, the Fabia is an exceptional small hatchback and probably one of the best in the class right now. It manages to combine youthful appeal, vim and style with low running costs and decent practicality. That doesn't make the Yaris a bad car by any stretch of the imagination, and the nameplate has a massive following in Ireland from loyal buyers that like the fuss-free experience of Yaris ownership. We'd take the Fabia though.