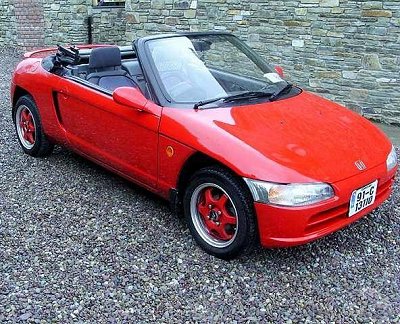 With the price of oil getting higher by the day and the Government seemingly intent on taxing motorists off the road, downsizing is the latest trend to hit the motoring world. Ford recently unveiled the 1.0-litre three-cylinder EcoBoost engine that will power the top selling Focus and the Volkswagen Group is busy with its up!/Mii/Citigo trio that offers big-car feel in miniscule little bodies. But have we not seen that before?

After World War 2 the Japanese authorities introduced the Kei-jishoda regulations to light a fire under the beleaguered manufacturers and give the population a cheaper way to get on the road. Essentially the regulations limited a cars size both dimensionally and power wise with tax benefits available for purchasers of these so-called 'Kei-cars'.

Only in the nineties did manufacturers decide to play around with the regulations a bit and began to experiment with turbocharging, four-wheel drive systems and body styles that appealed to those looking for something sporty.

It seems that with the economy the way it is these cars make as much sense in Ireland today as they did in Japan twenty years ago. Here is our pick of sporty Kei-cars on sale right now in Irish classifieds.

Do not adjust your monitor. This is not a picture of a Honda S2000 that has spent too long in the drier; it is instead the Beat, a Pininfarina designed car that was the last vehicle signed off by Soichiro Honda before his death. The little roadster is a mid-engined rear-wheel drive affair (like a mini-Ferrari then, kind of) that, unlike its contemporaries, does without forced induction to create its 64hp. Instead the Beat features a 656cc three-cylinder engine with MTREC (Multi Throttle Responsive Engine Control) and throttle bodies. It also has a 9,000rpm redline. I lied: it is a mini S2000!

Ok maybe not this particular example, but the rarity of the Suzuki Cappuccino is evidenced by the fact that this is the only example we could find on sale in the country. Thanks to a fancy roof the 657cc, turbocharged, rear-wheel drive car can run as a coupé, T-top, Targa or full convertible. Unlike many of its rivals the Cappuccino was officially sold in Europe through Suzuki UK with later models benefiting from a limited slip differential.

Yes we know the Smart cabrio is European but its diminutive size and 660cc engine mean it does qualify for the Japanese Kei class. The fact that it was the least successful Kei-car and was withdrawn from sale in 2004 is beside the point. This particular model is the Brabus tuned version with a more aggressive look, nicer interior and, more importantly, 101hp! It is just a shame the Smart's tuning partner decided to retain the awful semi-automatic gearbox, which is as smooth as lumpy custard.