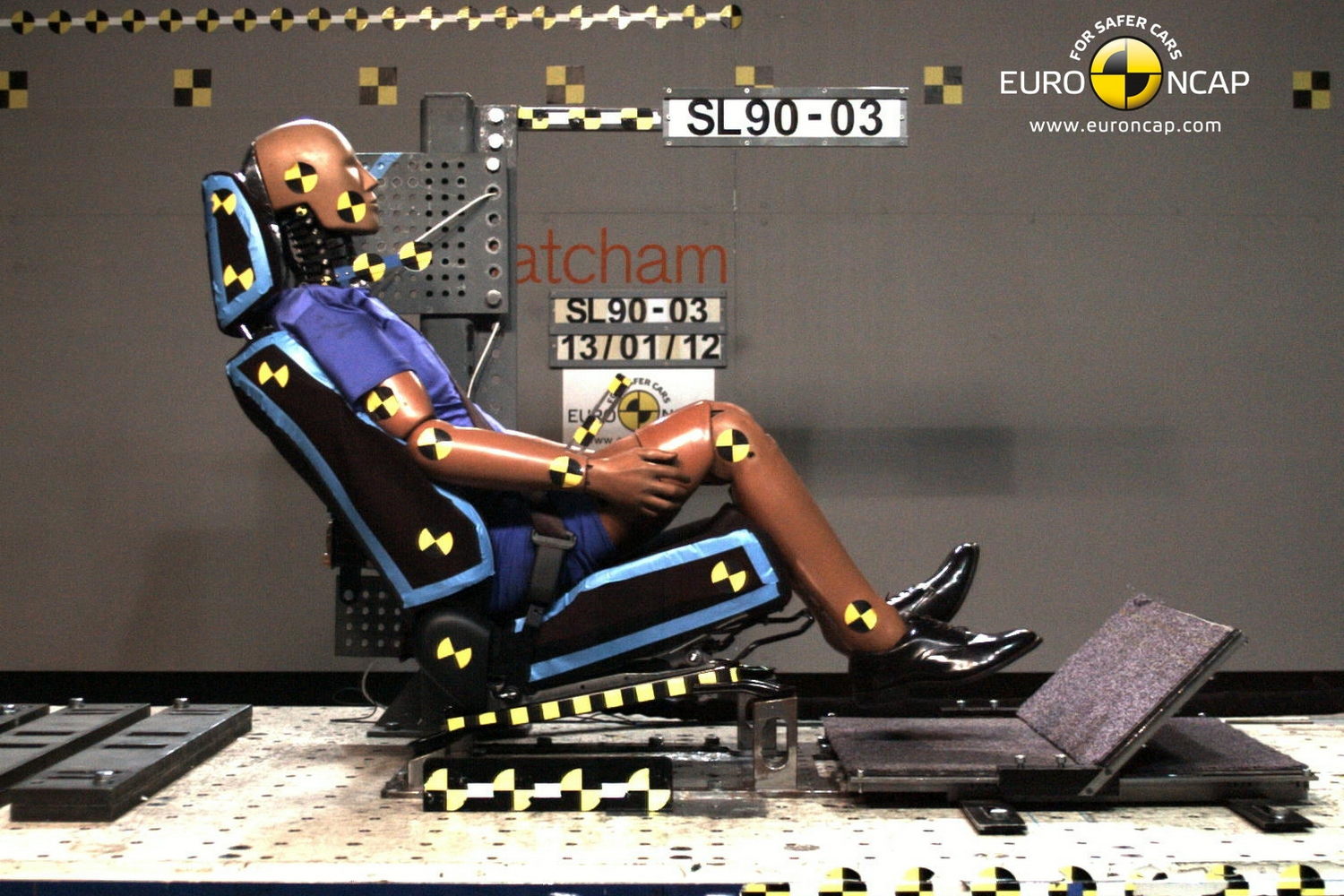 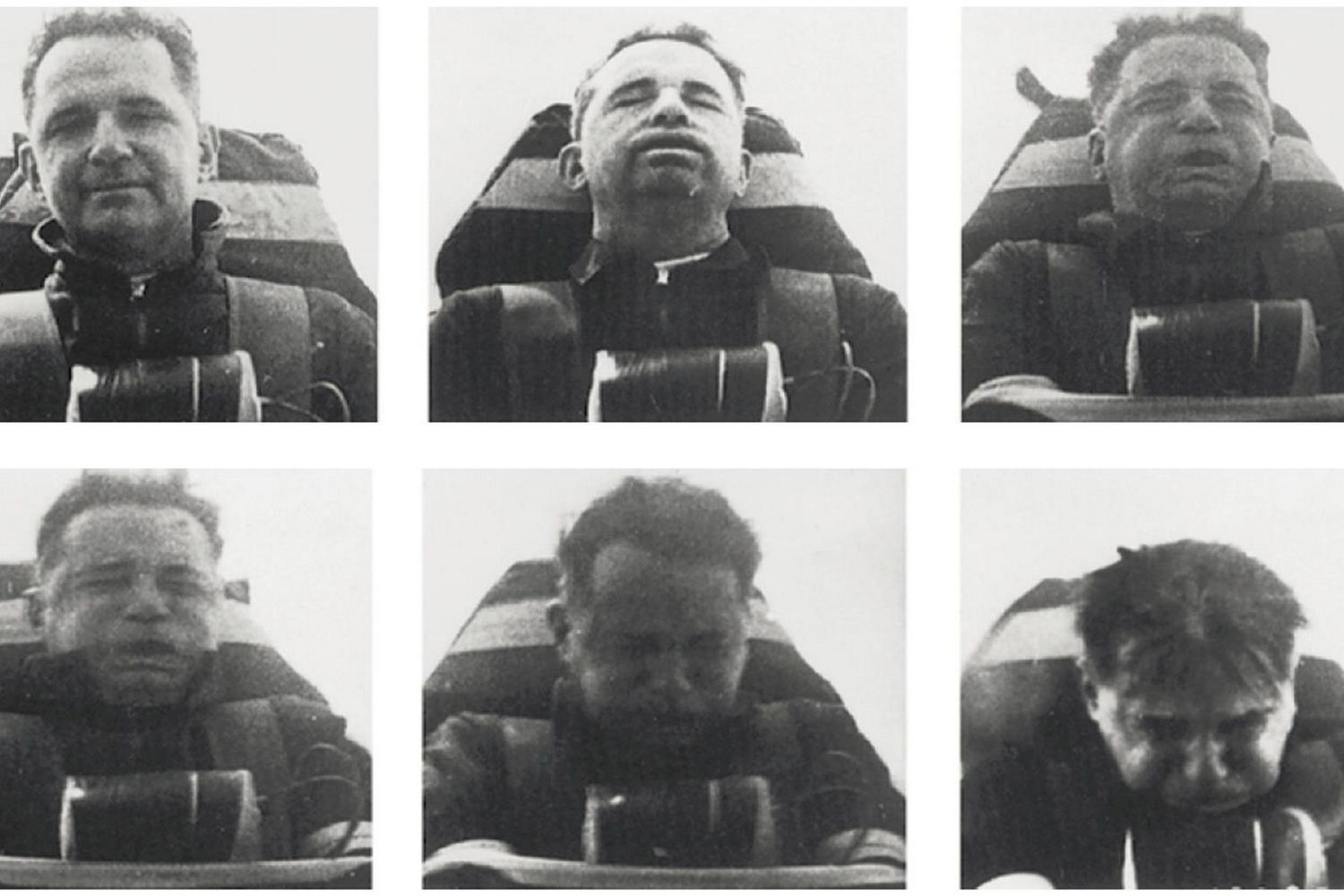 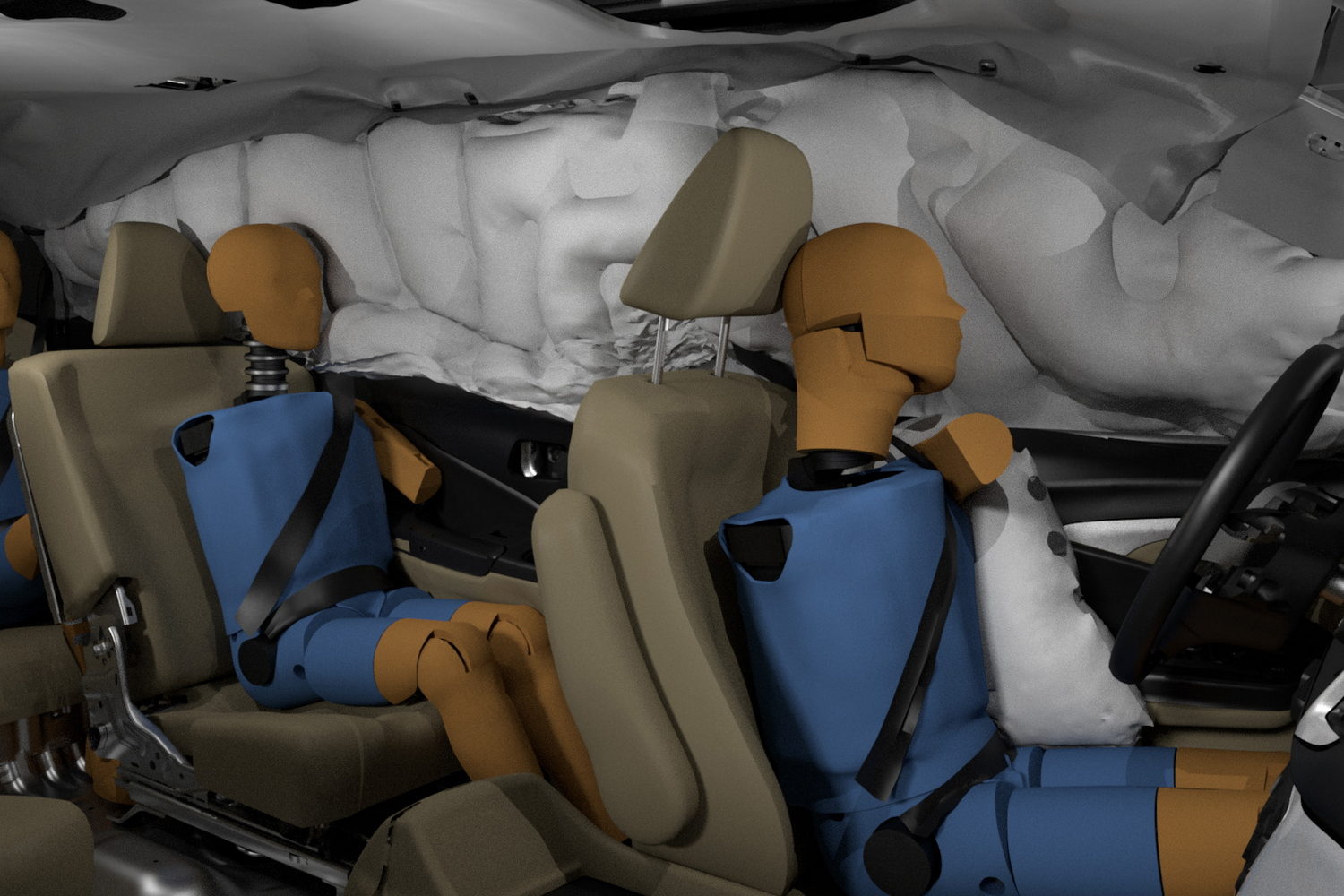 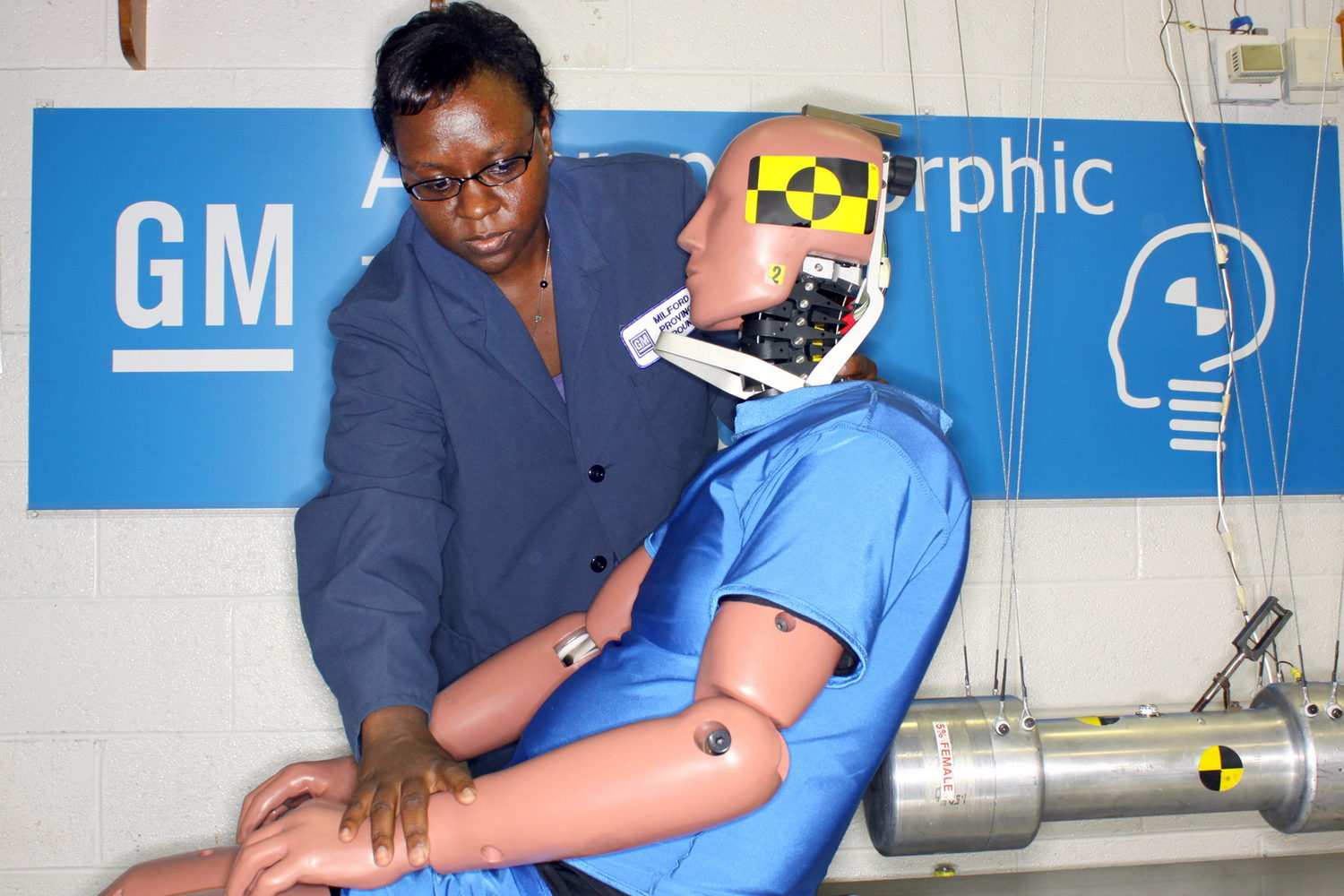 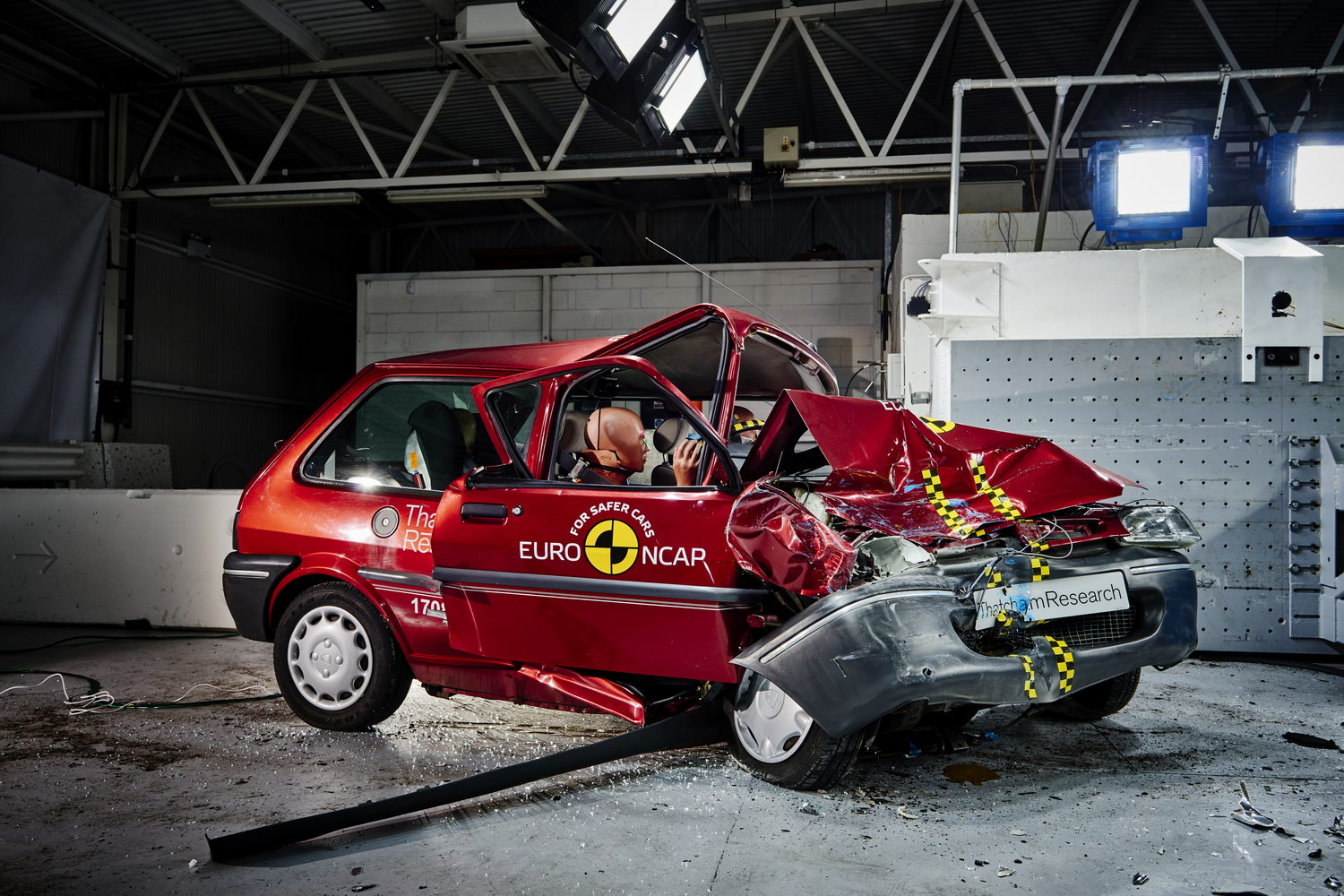 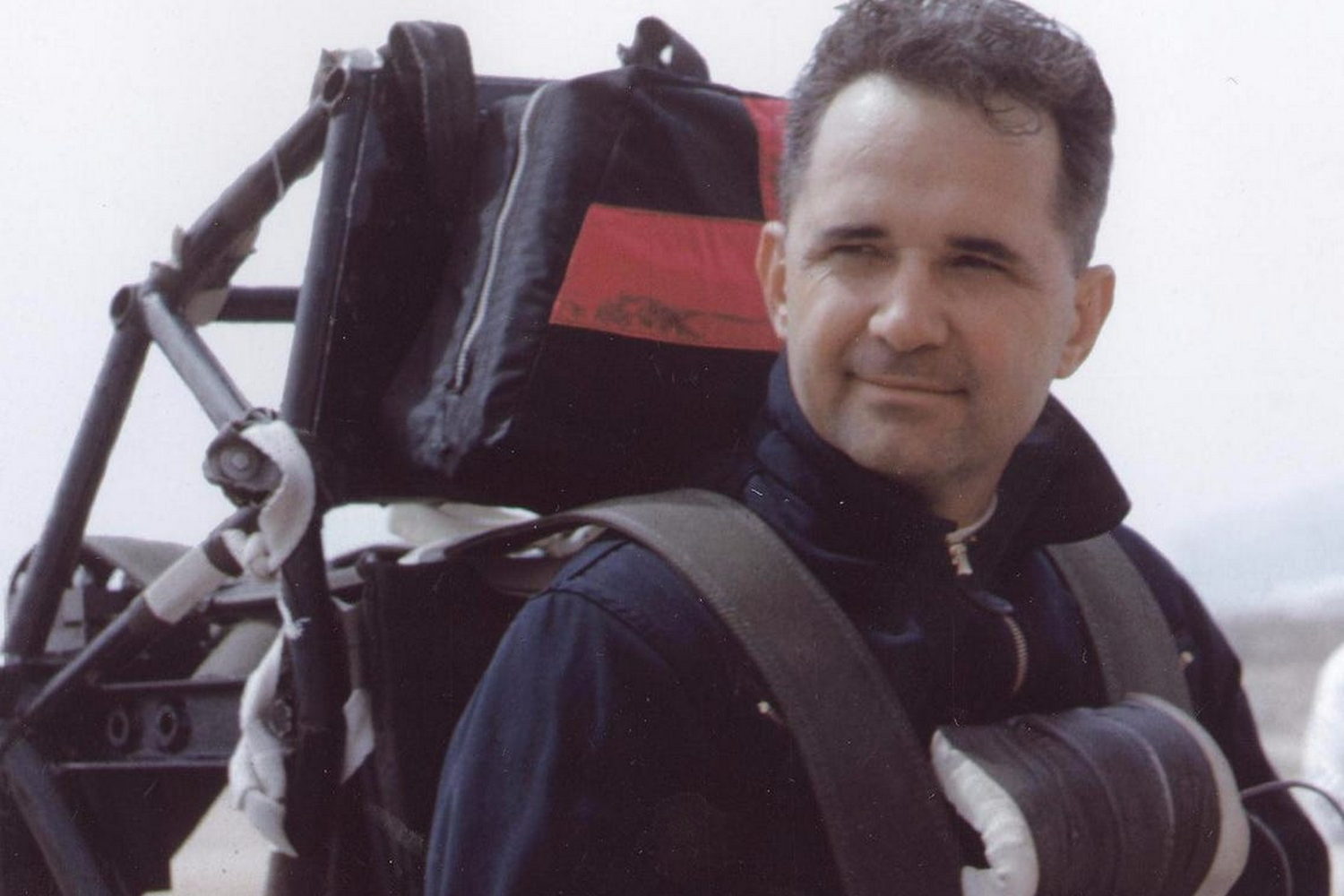 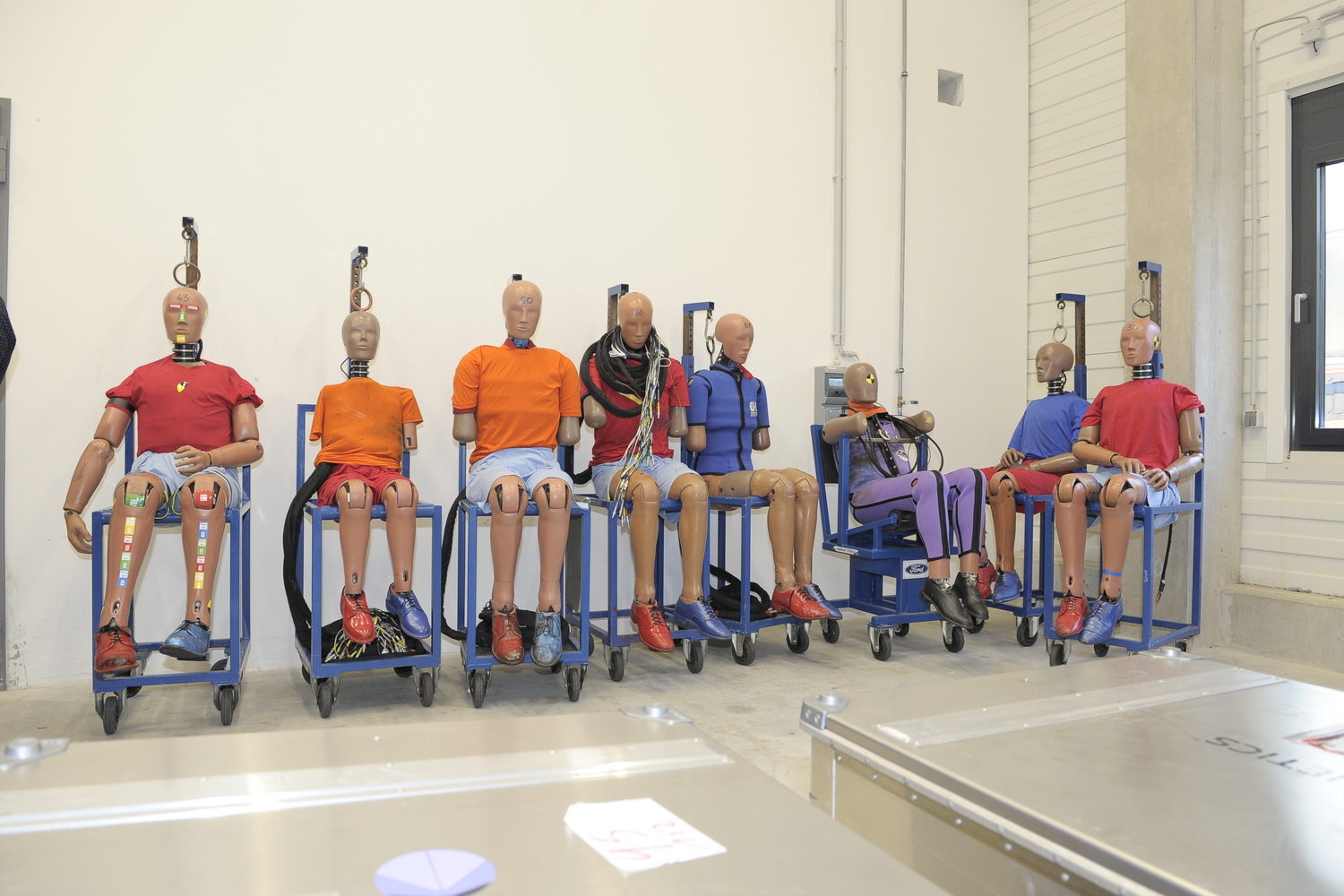 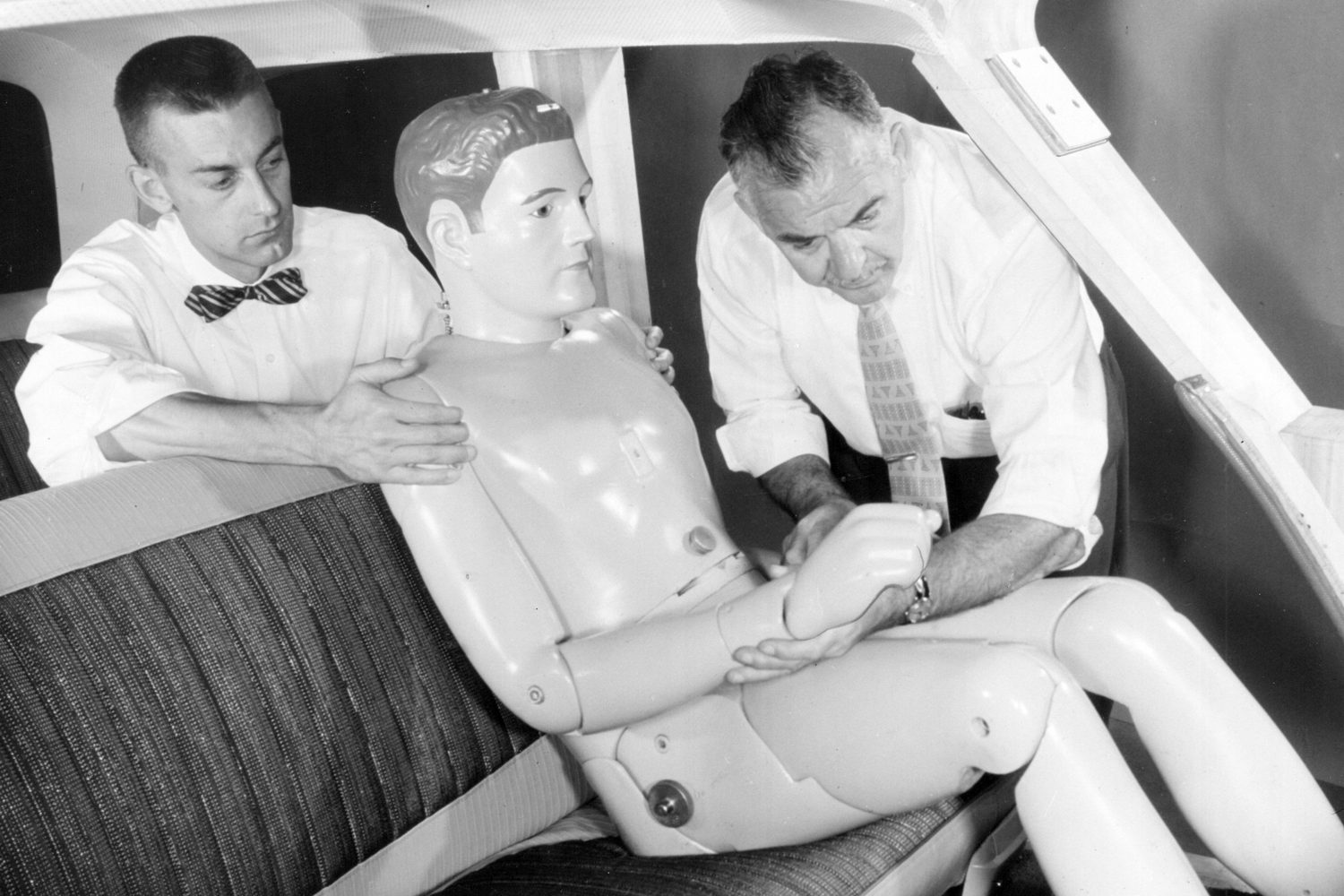 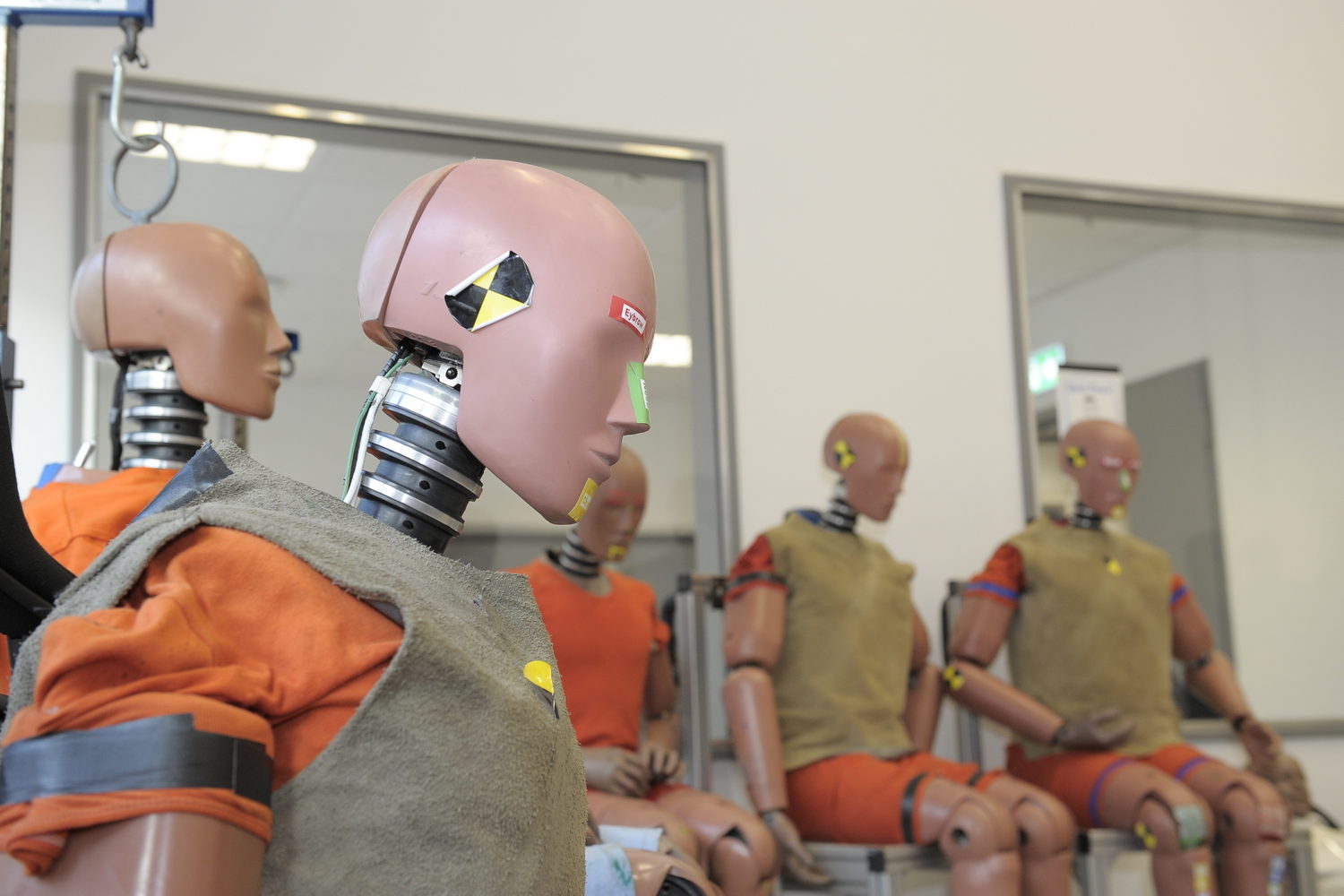 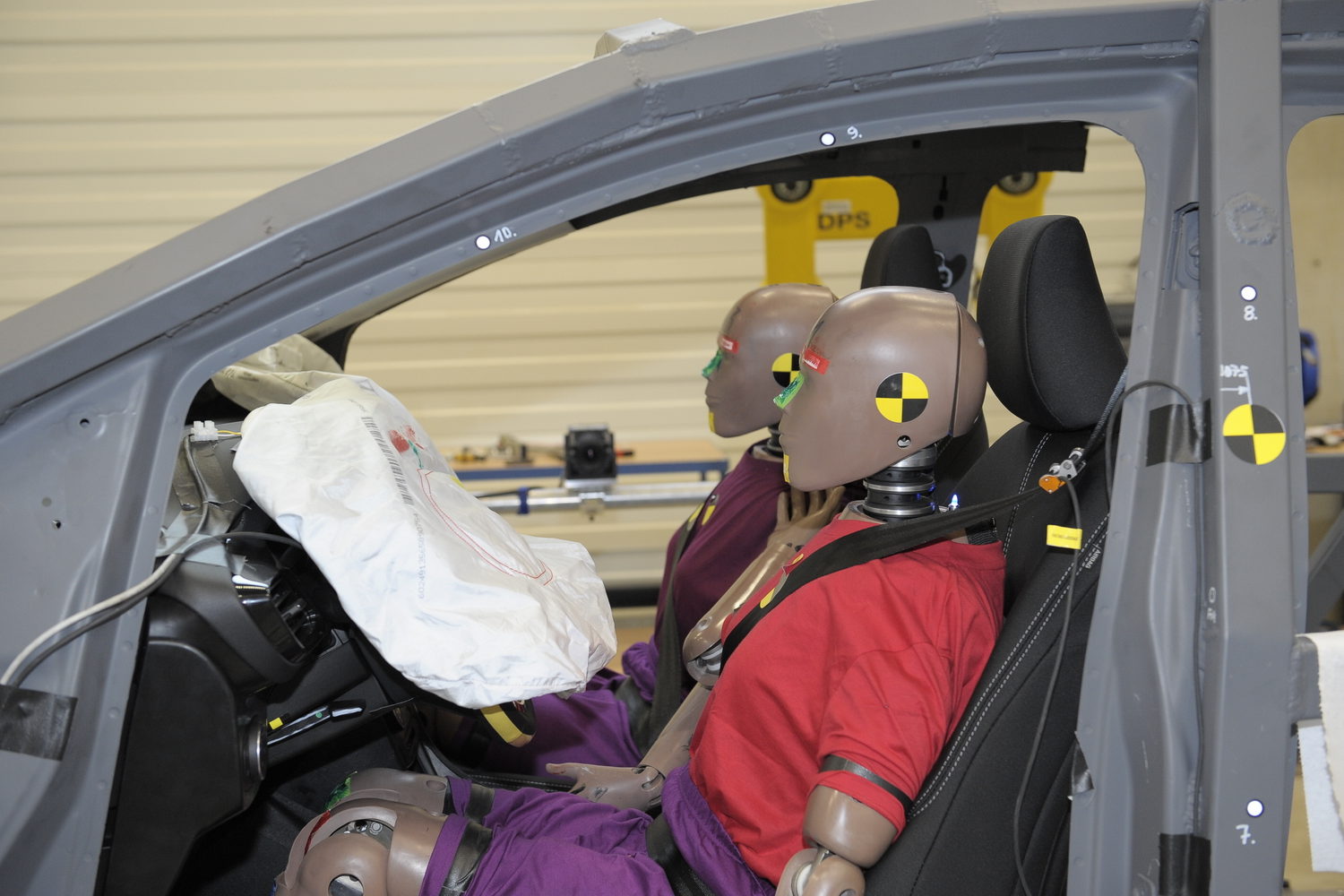 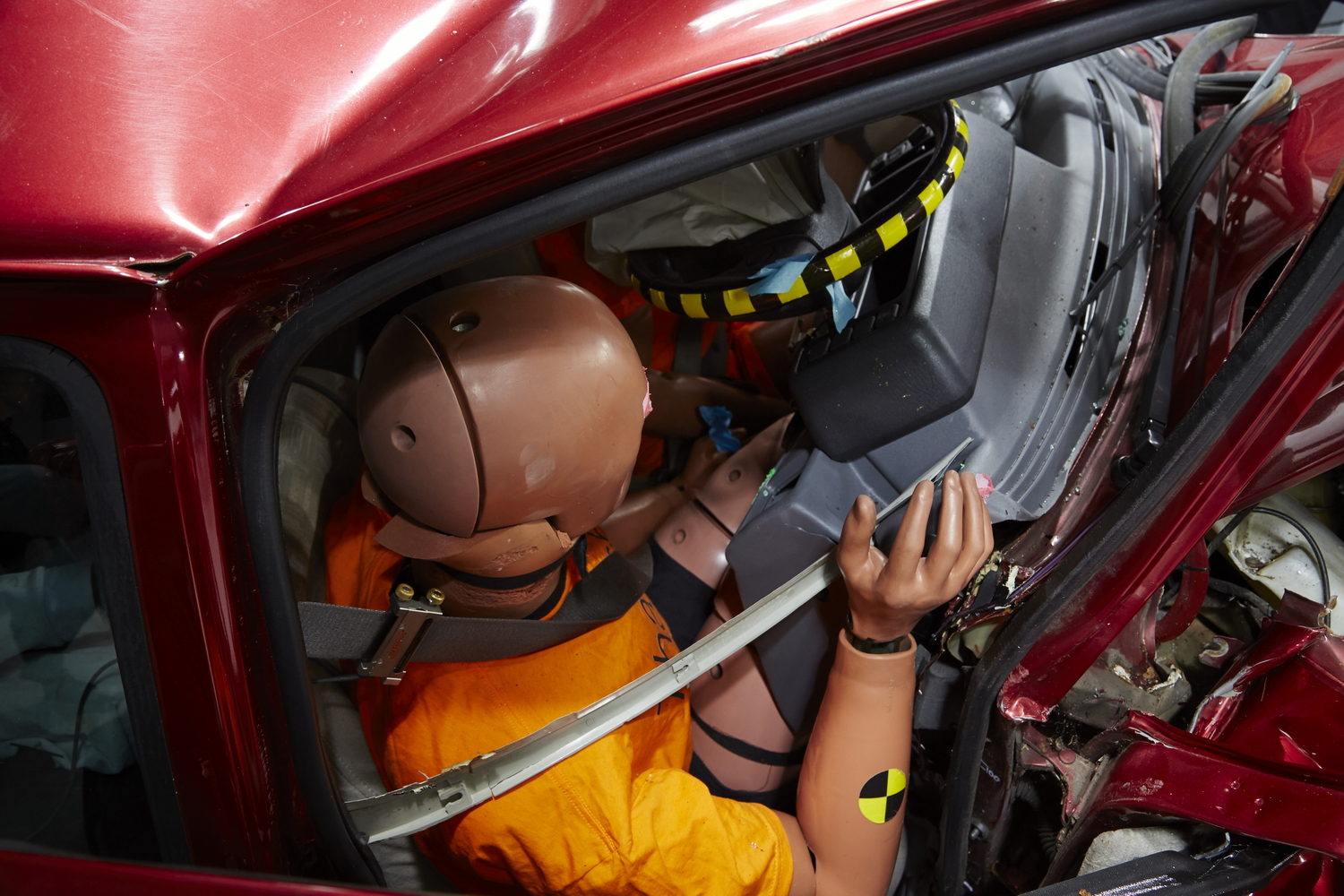 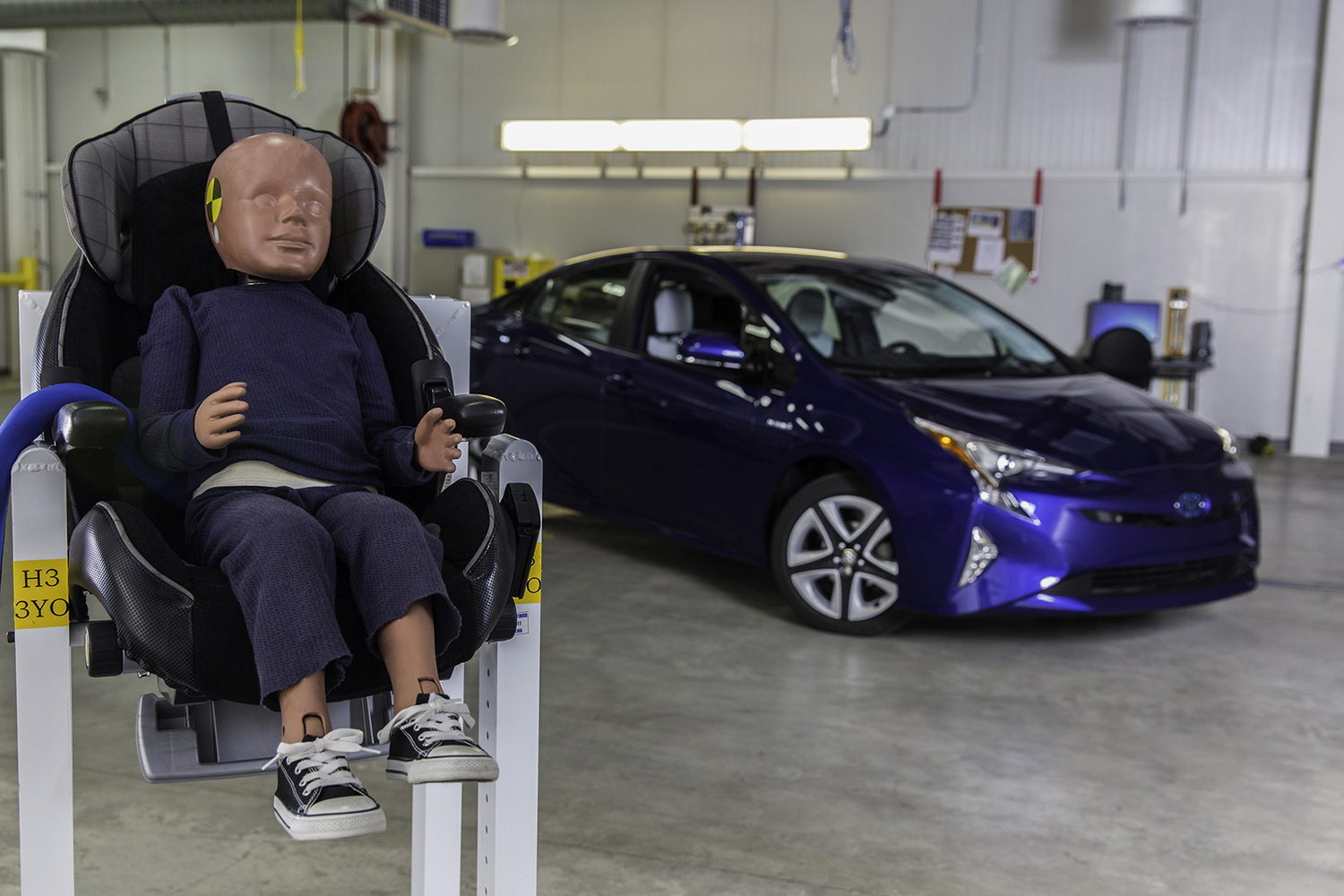 Crash test dummies get hurt so you don't have to. Here's their story.

Depending upon how you look at it, the first crash test dummy wasn't a dummy at all, but a human: Captain, later Colonel, John Stapp of the US Air Force.

In December of 1947, Captain Stapp strapped himself into an insanely over-powered rocket sled - think of a space rocket, but lying on its side and running on rails - and lit the engines. Stapp's work was all about finding out how much g-force a jet pilot could survive without, y'know, dying. The crash test dummy that we all know and love today simply didn't exist at the time, so Stapp volunteered himself and his own body in lieu.

The tests were staggeringly violent. It wasn't the acceleration so much - rockets accelerate pretty steadily - it was the deceleration. At the end of the rails was a deep trough of water, which would snag the sled and slow it down almost as fast as running into a brick wall.

Stapp put his body through some astounding extremes. In one run, he survived deceleration forces of as much as 38g - that's 38 times the force of gravity, meaning his circa 80kg body would have weighed more than three tonnes at the peak of the deceleration. This was after accelerating to a peak speed of more than 1,000km/h...

I say survived, but Stapp suffered for his cause. According to records, he "sustained a fracture of his right wrist during the runs on two separate occasions, also broke ribs, lost fillings from his teeth and developed bleeding into his retinas that caused temporary vision loss." He did recover, thankfully and there's a direct connection to the world of car safety. Stapp's initial work had been to improve pilot safety, but the Air Force did loan him to the US National Highway Traffic Safety Administration, where he helped to improve the design of the three-point seatbelt.

However, with just one Captain Stapp around, it was clear that some sort of analogue would be needed for future research. It was obvious in the car world that simulated crashes would be needed if useful research were to be carried out that would, eventually, save lives. We'd need some actual dummies.

The first was developed by Samuel W. Alderson, who in 1952 founded Alderson Research Laboratories (which later changed its name to Humanetics). Alderson needed ways to test emerging harness and safety system designs, again primarily for aircraft, and started making the first dummies - known as 'Sierra Sam' after Sierra Engineering company that helped to make them - in 1949.

By the late sixties, Alderson was developing the first specifically automotive dummies, although at first these were simply human-shaped weights designed to test the stretching and breaking points of seatbelts and other harnesses.

These rapidly improved, with the inclusion of different shaped and sized dummies to represent male, female and child shapes. General Motors would then take up the baton, taking parts and inspiration from all of Alderson and Sierra's designs to create a dummy known as the Hybrid I, which featured 'bio-accurate' joints and a sophisticated neck design, giving engineers more of an insight into how human bodies would react to impacts.

A bit like Volvo's three-point seatbelt design, the story of the crash test dummy includes a touch of altruism - GM released the details of its eventual Hybrid II dummy design to competitors, so that they could use the same dummies to help develop better safety systems.

This being a patriarchal world, much of the early dummy testing was based around male body sizes, shapes and weights, but through the 1970s and into the 1980s, female and child designs began to improve, and it was through experiments with child-sized dummies that the first child safety seats began to emerge, as well as advice never to sit forward-facing child seats in the front of the car.

By now dummies were starting to come with telemetry and instrumentation of their own. Each dummy head has to be properly calibrated for how it deals with an impact, to ensure the closest possible alignment to a real human before it's put through an actual crash test. Dummies have internal ribs that bend and flex just like ours (except, of course, theirs can be rather more easily fixed and replaced following an impact) and some even have a 'skin' made of chamois leather to detect possible puncture wounds.

Just as our heart is in our chest for maximum protection, so a crash test dummy's data recording pack is in their chest, taking in all of the impacts and movements for later downloading and analysis. There are also specialised dummies for side impacts, rear impacts and even obese dummies to help examine how seatbelts and airbags stand up to heavier humans being flung at them.

Dummies have a cooler name, these days. Technically, they're known as Test device for Human Occupant Restraint, which leads to the rather wonderful acronym of THOR. Thanks to their increasing sophistication, dummies are now becoming seriously expensive, costing as much as €1 million each to make.

The dummies (sorry, THORs) have entered popular culture, too. No, I don't mean the mid-nineties indie-punk band, or at least not entirely. Volvo actually pushed its crash test dummies to the fore in the 1980s, showing one getting in and driving a 340 hatchback through a plate-glass window, down a one-storey fall and smashing into the ground. The advert came with the memorable tagline "tested by dummies, driven by the intelligent." Later ads would feature whole happy families of dummies.

And what of John Stapp, the original crash test dummy? He lived to the ripe old age of 89, passing away at his home in Alamogordo, New Mexico in 1999. He was the honorary chairman of the Stapp Foundation, paid for by General Motors, which provides scholarships for automotive engineering students. He also has another legacy - he's reckoned to be the originator of the infamous Murphy's Law; anything that can go wrong, will go wrong. He definitely coined his own Stapp's Law (or Stapp's Ironic Paradox), which states: "The universal aptitude for ineptitude makes any human accomplishment an incredible miracle." Both laws could be said to be the prefect inspiration for more safety testing.