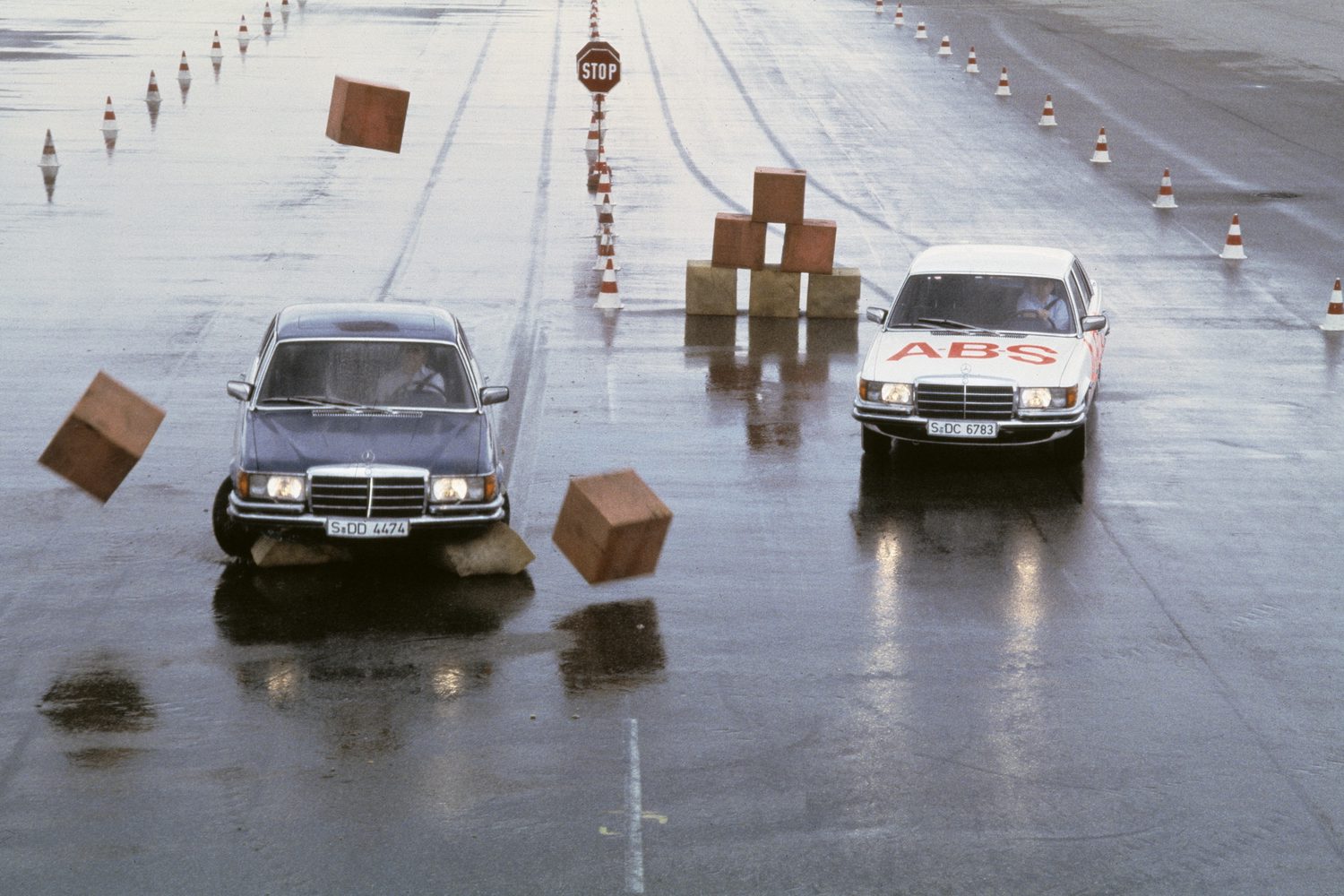 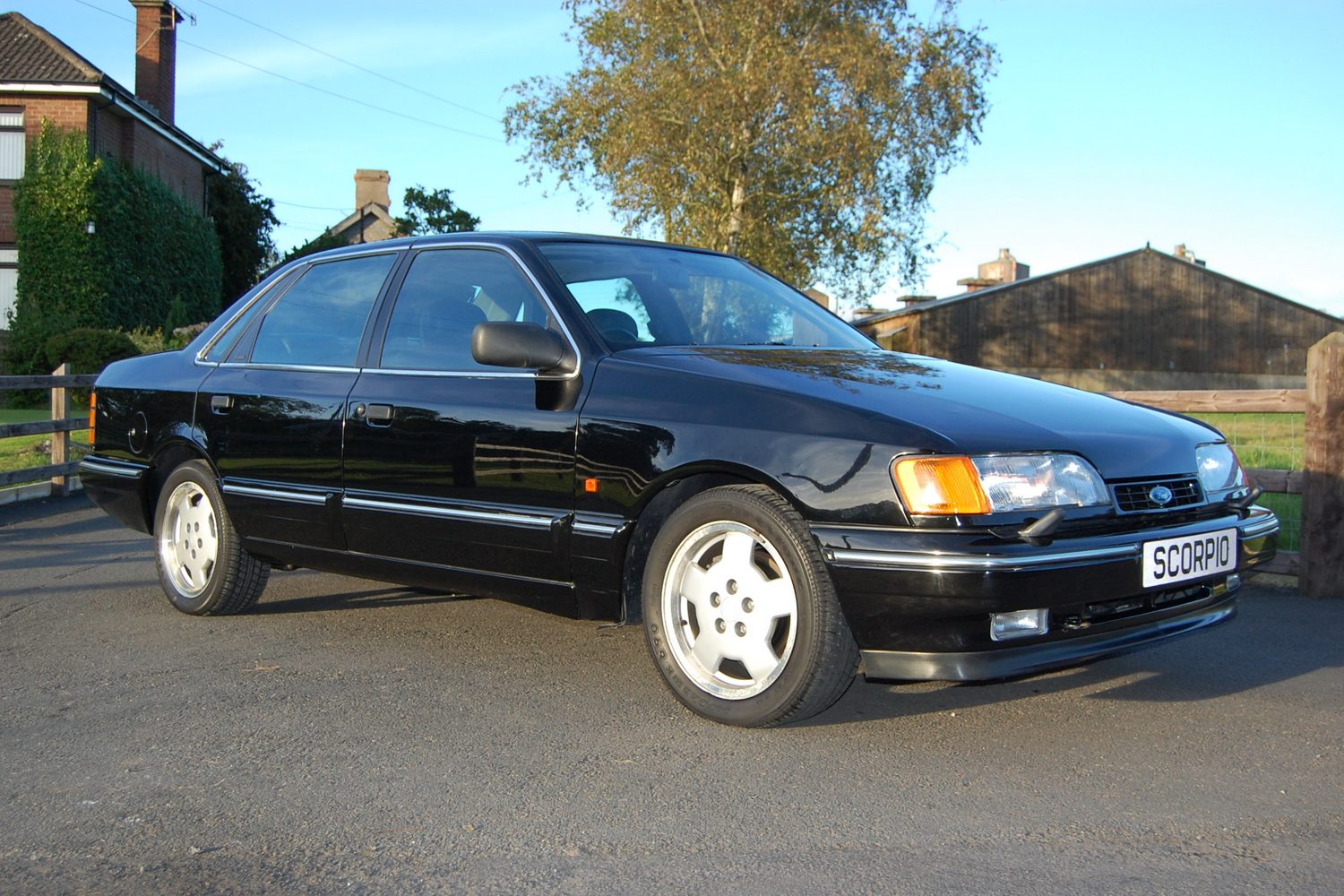 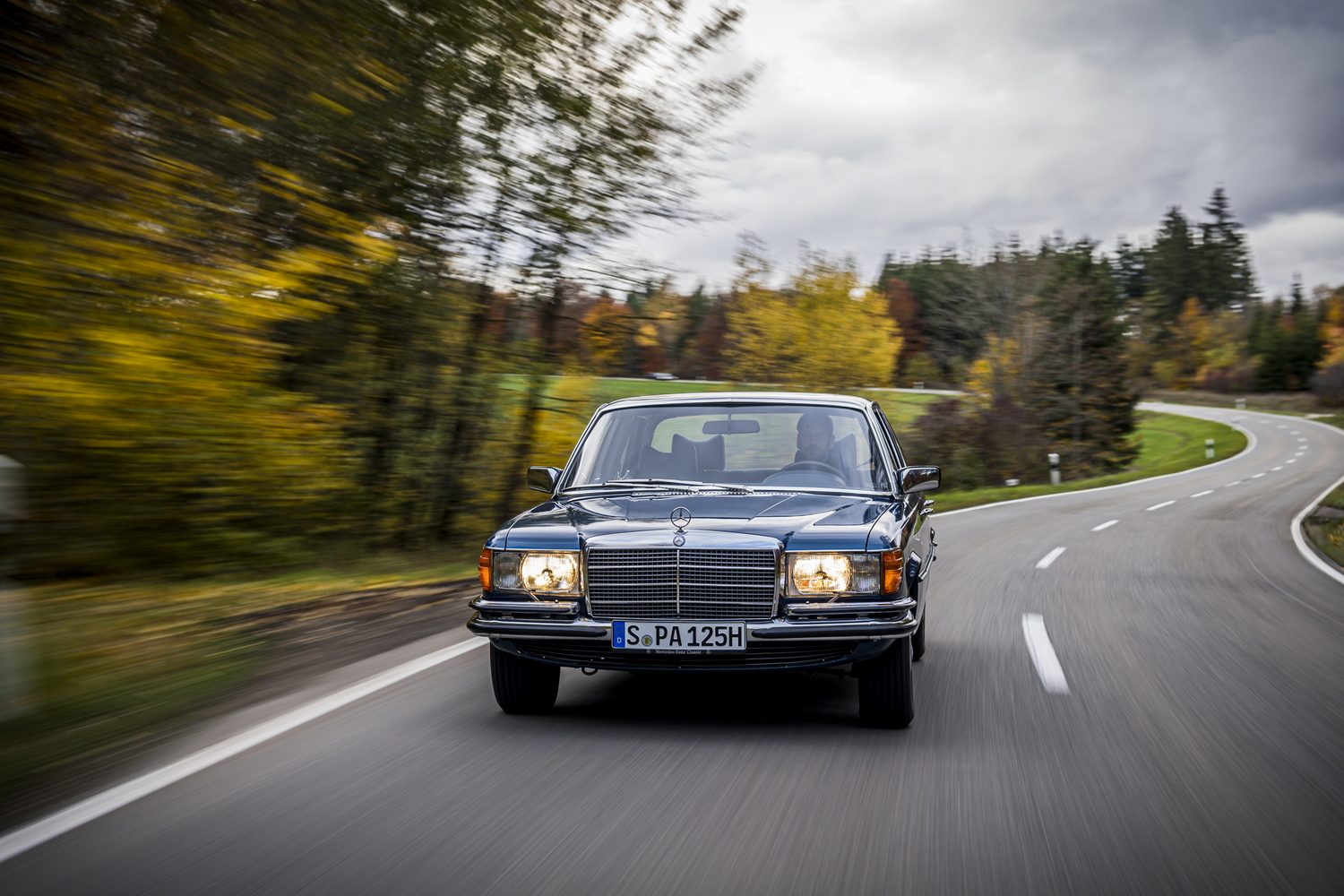 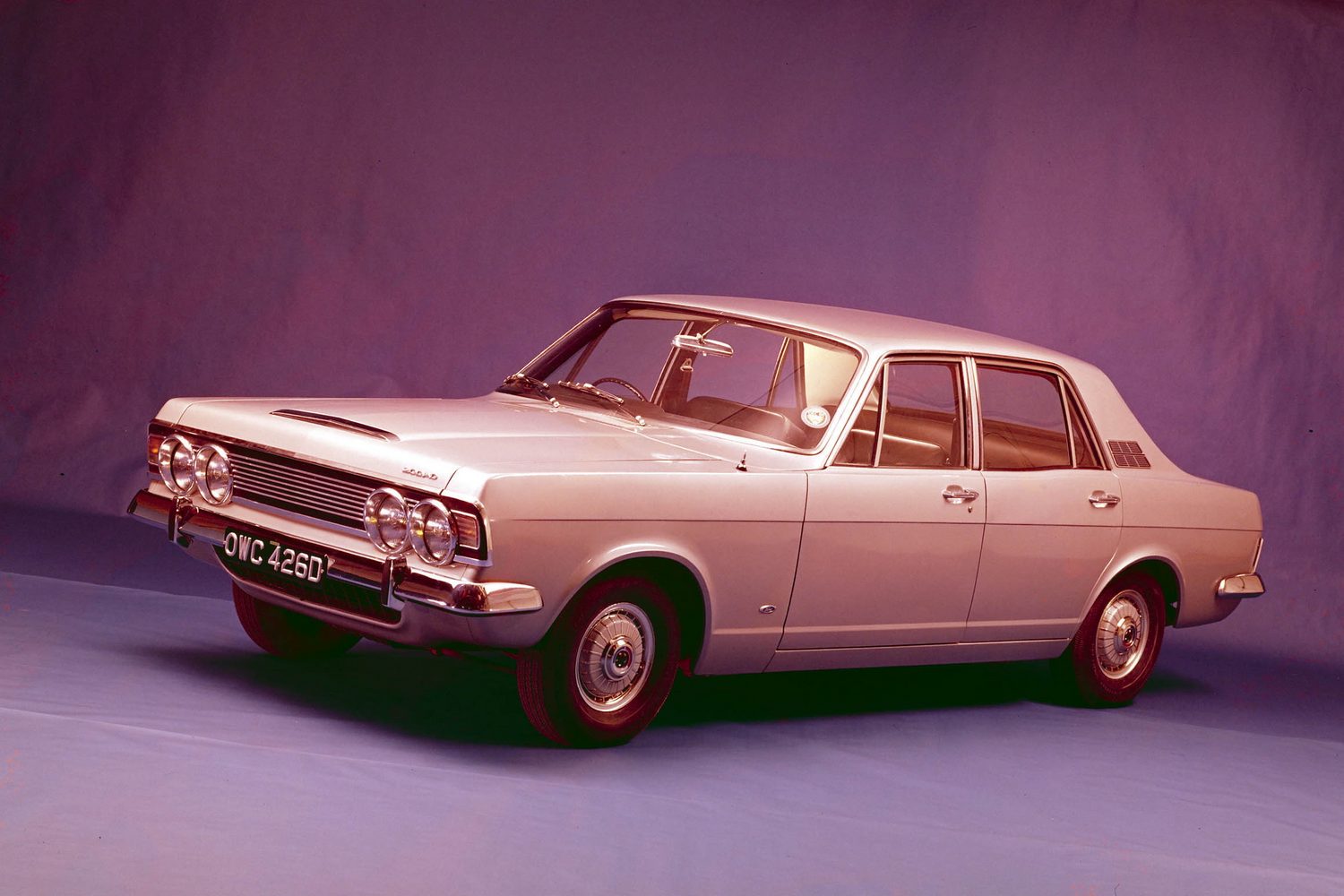 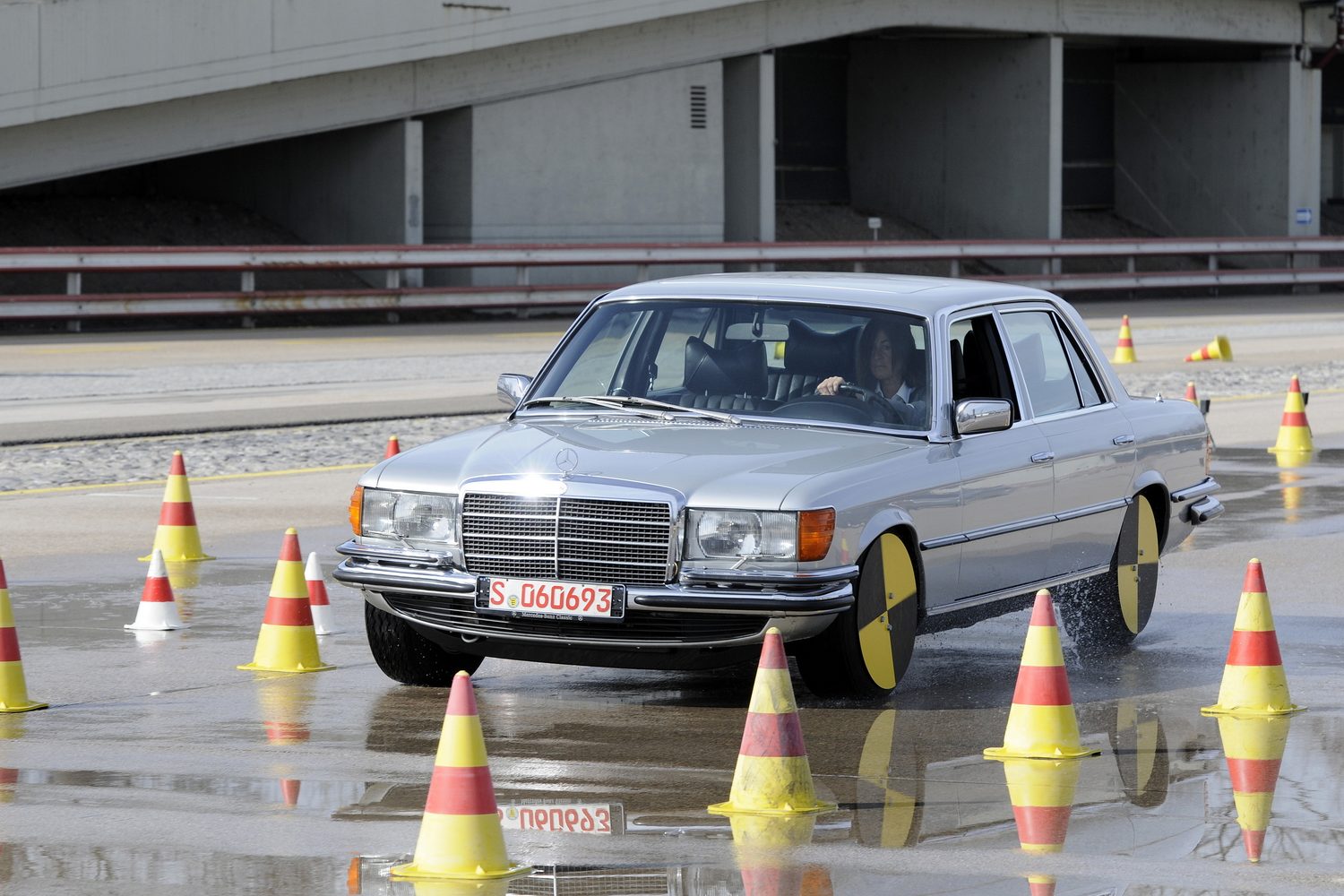 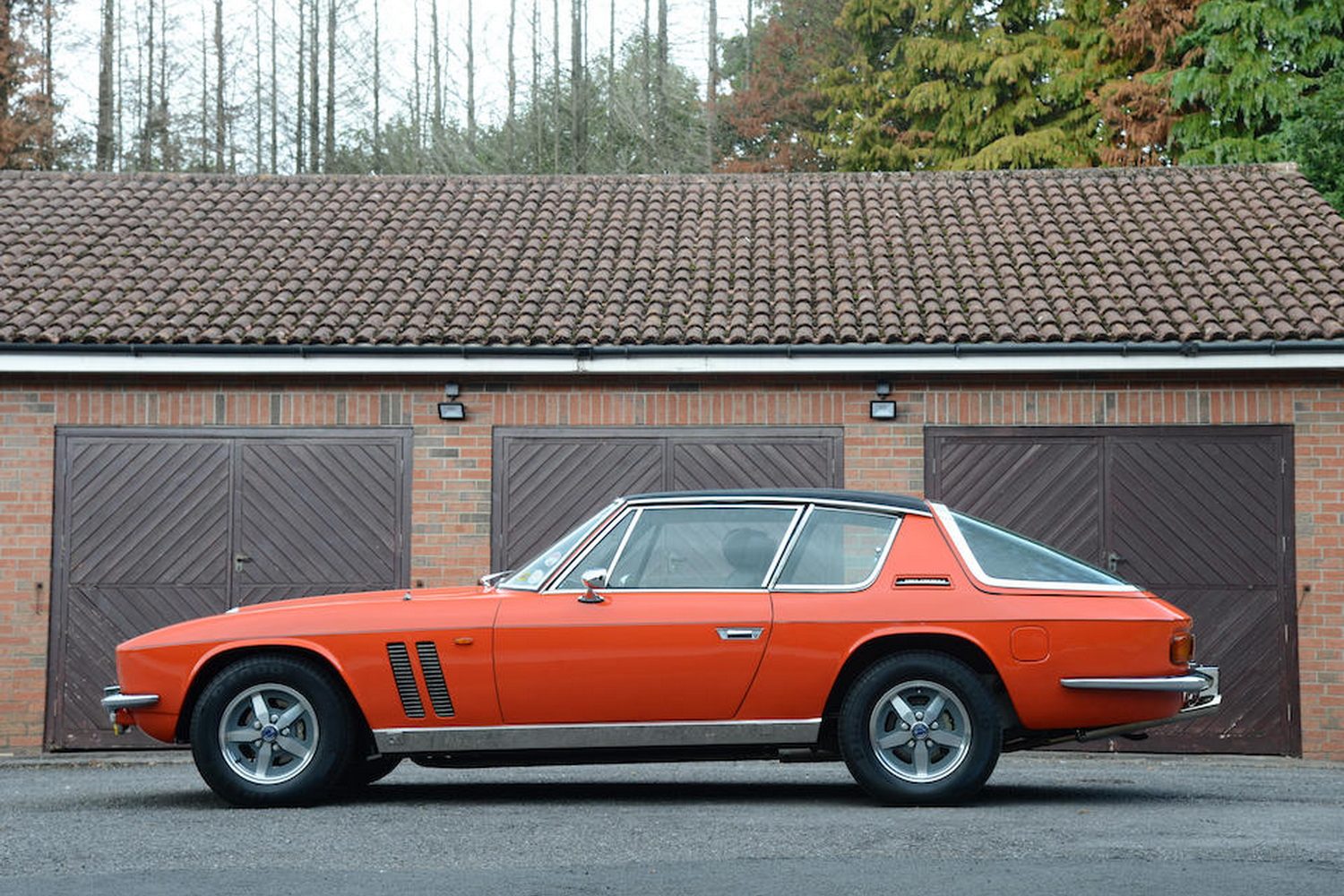 ABS make cars controllable when you need to stop in a hurry.

Maybe it's because I'm a child of the eighties, but the TV adverts from back then just seem to be burned into my cerebral cortex in a way that modern advertising can't seem to manage. One recurring memory (possibly backed by Brian May's cheesy-but-catchy theme tune) recalls a silver Ford Granada MkIII heading swiftly along a country road, intercut with first-ten-minutes-of-Casualty style foreshadowing of a tractor pulling a big trailer full of something agricultural.

Inevitably, the tractor blunders out onto the road, just as the Granada approaches, but instead of a squeal of locked-up tyres, the sound of crunching metal and a stern voiceover warning of the dangers of not watching where you're going, the silver Ford simply slows, swerves and deftly dances around the tractor.

I've probably misremembered this and mixed it up with a dozen or so other adverts and I don't want to tip myself down the YouTube rabbit hole and remind myself of my fallible memory, but I'm fairly sure that this was my first exposure to the idea of anti-lock brakes.

The Anti-lock Braking System, or ABS, was arguably popularised by Ford through its peerless eighties marketing, but the story doesn't start with Ford, and nor does it start in the eighties.

Keeping your brakes from locking up under hard application was a skill often taught to drivers in the pre-ABS days. Back then it was known as cadence braking, and the idea was that a skilful driver could hold their brakes just on the edge of locking up, gently applying and releasing pressure as they felt the locking approaching. Doing so meant that your tyres kept rolling, which meant that you could still steer and control your car, able to swerve away from danger at the same time as slowing down, hard.

In practice, cadence braking was a really, really tricky thing to manage and usually meant viciously jabbing your foot at the brakes, allowing the wheels to lock momentarily before they were released again. It kind of worked and was slightly better than just surrendering yourself to the fates of adhesion and abrasion, but it wasn't very elegant and didn't leave much brain space left for accurate steering.

The answer came initially from the world of aviation. The theory of creating a braking system that would automatically avoid locking up a wheel and skidding dates back as far as the 1920s, but the technology of the time simply didn't allow it. It would be the 1960s before braking tech matured to the point where ABS was a reality, and it was - almost inevitably - the Concorde that pioneered the use of ABS.

While Dunlop-developed anti-skid braking had been used as far back as the 1950s on high-performance military aircraft such as the Avro Vulcan, it was arguably Concorde that first popularised the idea of ABS. Everything about the Concorde was cutting-edge, to the point where the US Air Force was fitting its fighter pilots out with G-suits and astronaut-style helmets for high-altitude flights only to find Concorde barrelling past them at Mach 2.4, with everyone aboard wearing smart dresses and suits, sipping champagne and nibbling canapés.

Speed was Concorde's calling card, but stopping it required some doing. That high-angle landing, which required the use of the famous droop-snoot nose so that the pilot could see, wasn't just about style, but was about using the vast delta wing to help slow the Concorde down to an acceptable landing speed. Even then it was touching down way faster than a conventional airliner. A Boeing 747 touched down at around 150 knots. Concorde's wheels touched the runway with the aircraft still doing 165 knots, and so it needed experimental Dunlop-developed carbon disc brakes and an ABS system that compared the turning speed of the (unbraked) front wheels to those of the main landing gear wheels under the wing. Repeatedly, this clever system would haul the world's fastest airliner to a comfortable stop.

By then, others were in the game from a motoring sense. Jensen had shown off an experimental C-V8 coupe in 1965 that featured Dunlop 'Maxaret' anti-lock brakes. This used a flywheel to compare the rotational speed of the wheels, which would trigger a switch to release brake pressure when there was a speed differential between the flywheel and its input shaft. The system would go into production in 1966 in the Interceptor-based FF coupe, which also pioneered four-wheel drive in something that wasn't a Land Rover. Jensen and Dunlop claimed that not only did the system let you retain control under heavy braking, but it also trimmed your braking distance by 30 per cent.

Perhaps that's the start of people misunderstanding ABS, and assuming that it pulls you up shorter than conventional braking. It doesn't, or at least doesn't necessarily. The Jensen FF's advantage in braking distances probably had as much to do with tyre technology as anything else.

At around the same time as the Jensen, Ford comes back into the picture with an experimental version of the big Zodiac six-cylinder saloon car. That Zodiac was, like the Jensen, equipped with Ferguson-developed four-wheel drive and the same Dunlop mechanical anti-lock brakes, a small fleet of which were built for assessment by police forces and government departments.

For the advent of true electronically regulated ABS, we have to turn to Fiat. An engineer by the name of Mario Palazzetti - who also filed patents for such arcane creations as sensor units for air conditioning systems and the quality-testing of spot welds - developed electronically-controlled anti-lock brakes at the Fiat Research Centre in 1971. Fiat would subsequently sell the patent to electronics and car components giant Bosch, which would coin the term ABS. Chrysler independently designed a four-wheel ABS system in 1971 as well, with the help of the Bendix corporation, and offered it as an option. It was reportedly a pretty reliable setup.

Mercedes was the first to offer ABS in Europe, as an option for the W116 S-Class from 1978 onwards. Honda introduced ABS for the Prelude coupe in 1982 and finally in 1985 we come back to my childhood memory, and the addition of an ABS setup designed by the Teves company, fitted as an option on the Ford Granada Scorpio of 1985. Since 2004, ABS has been a legal requirement for all cars sold in the EU.