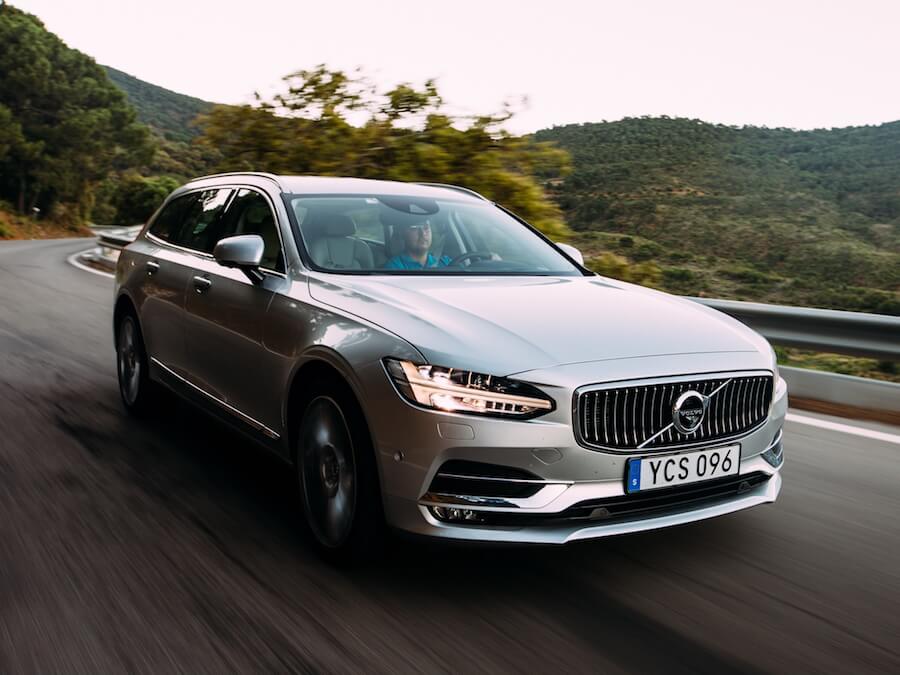 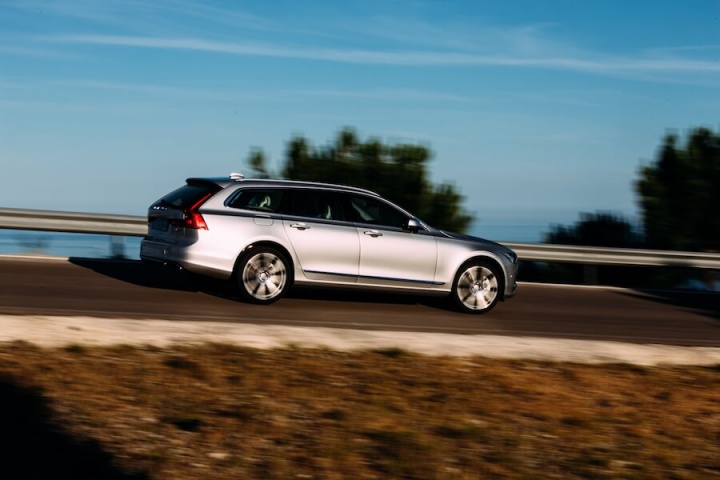 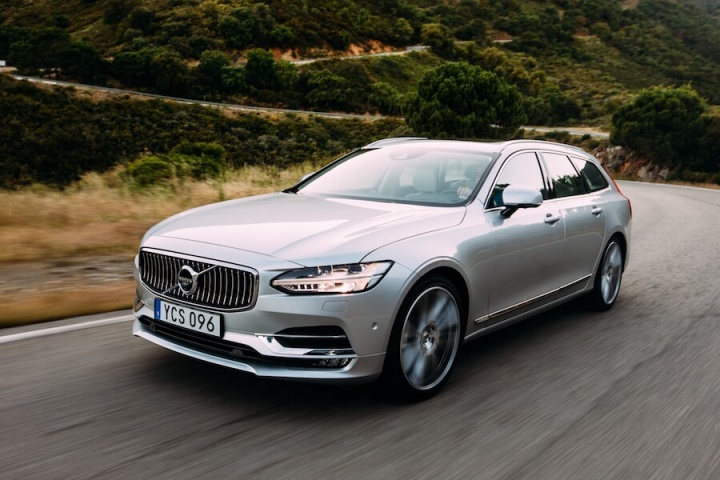 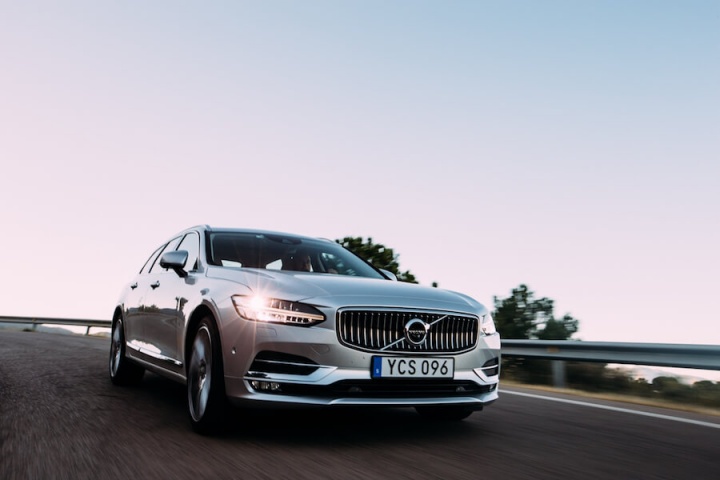 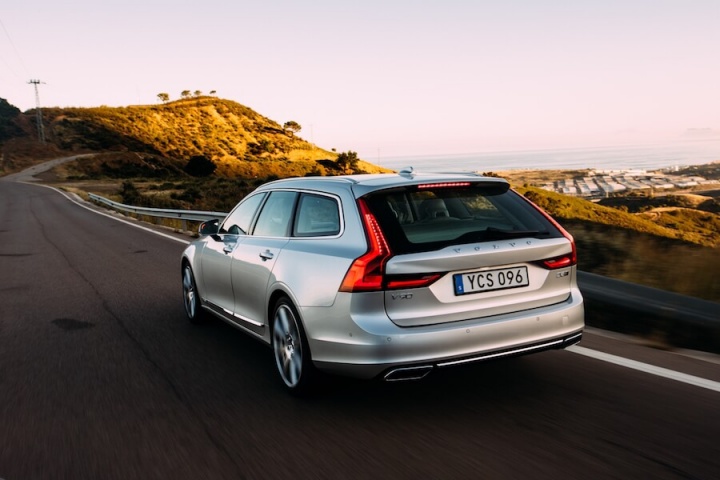 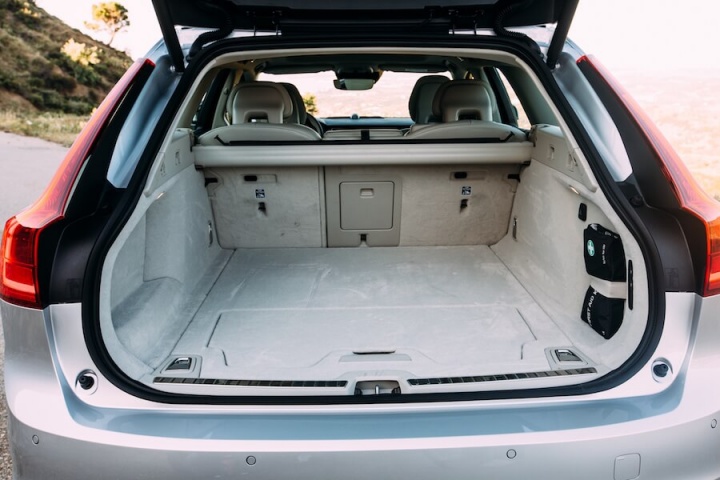 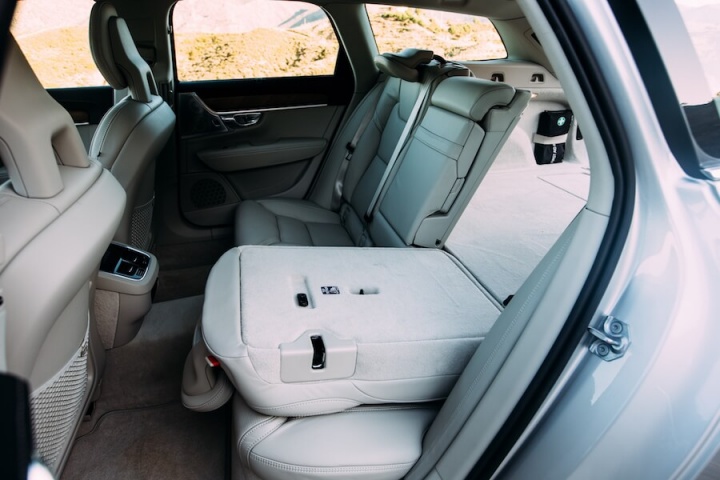 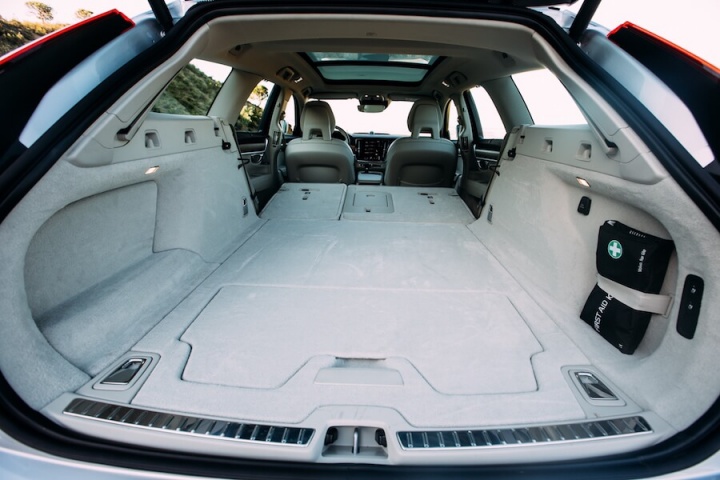 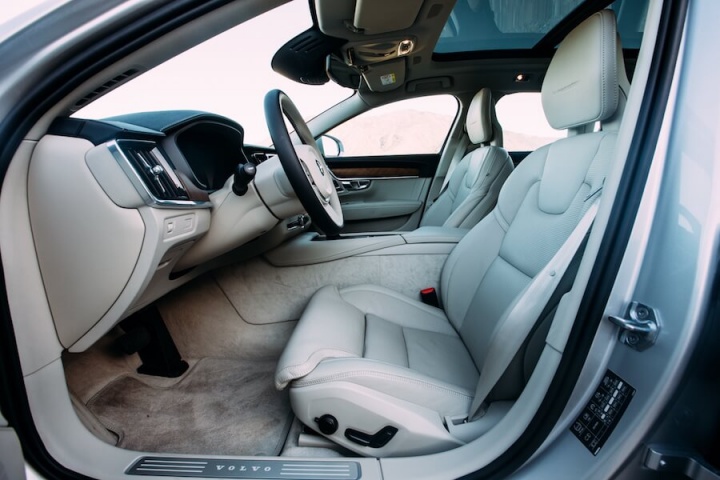 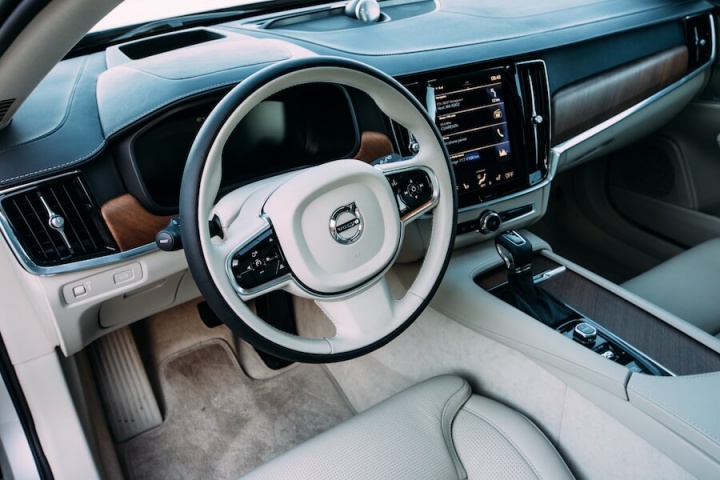 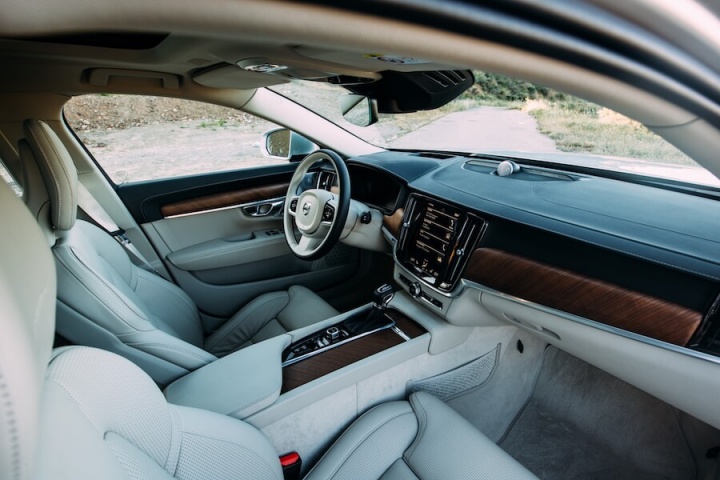 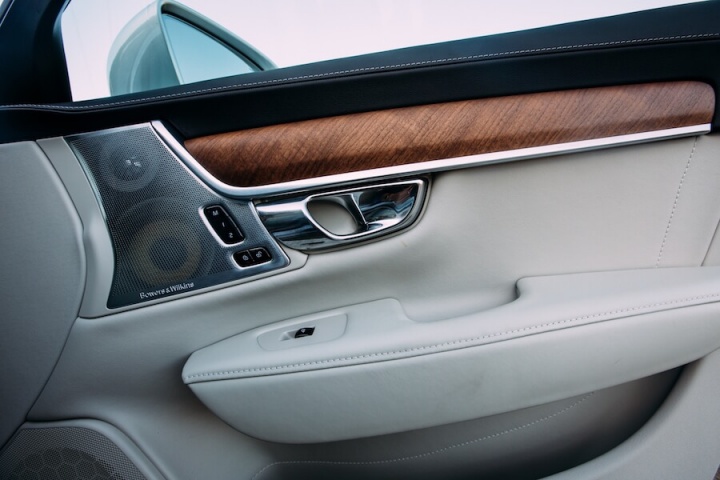 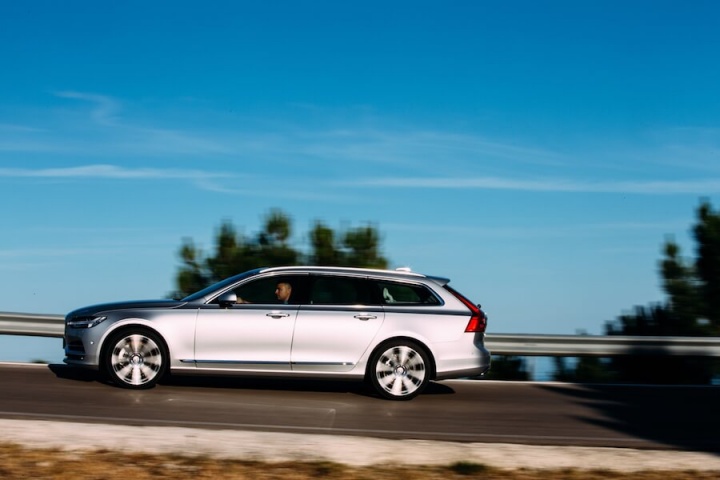 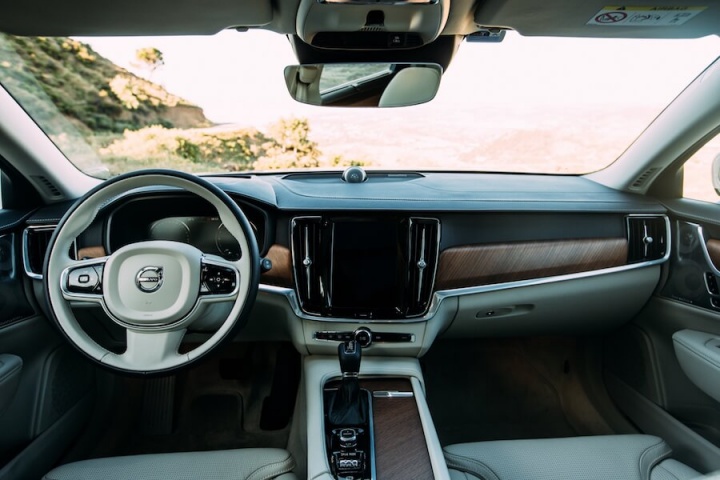 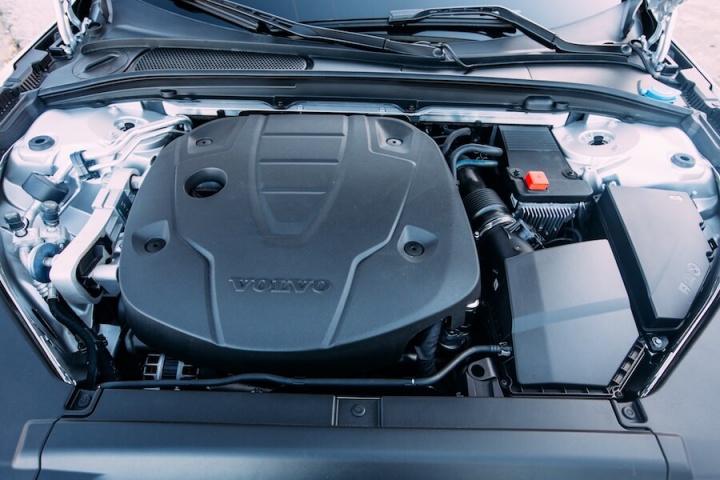 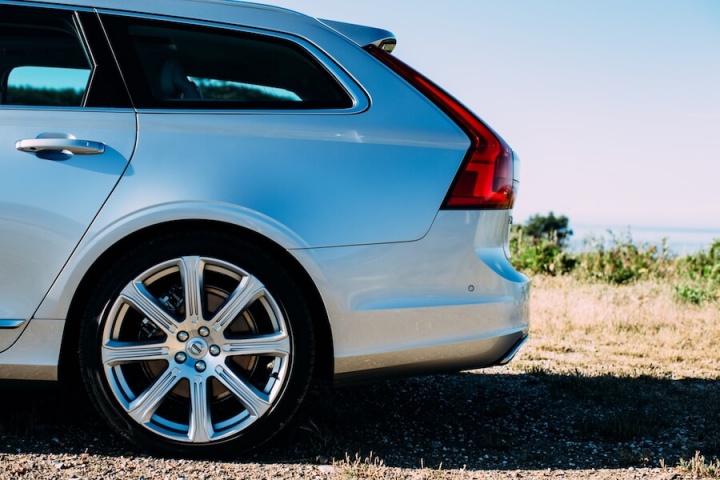 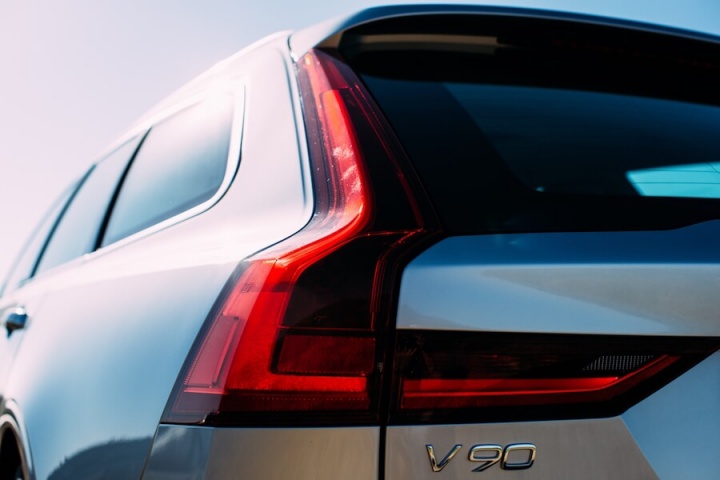 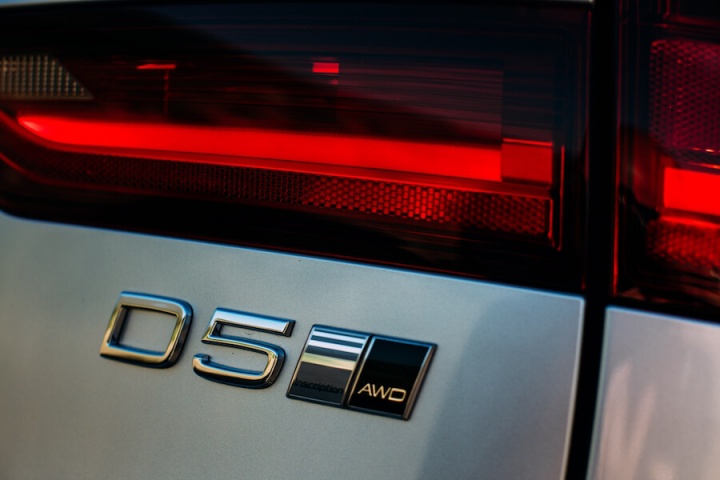 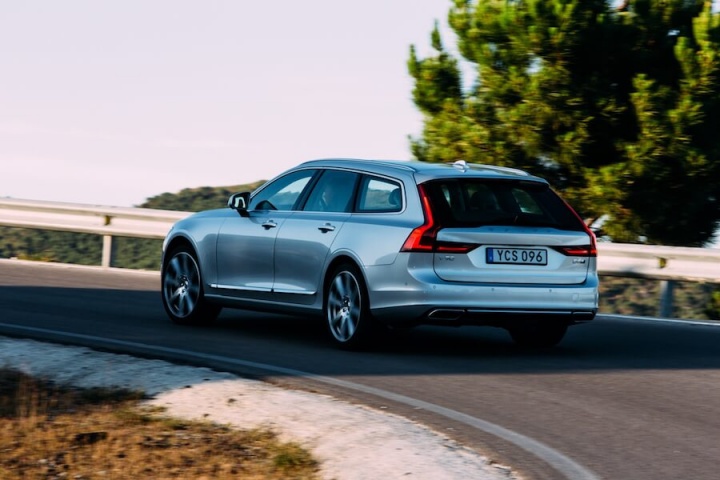 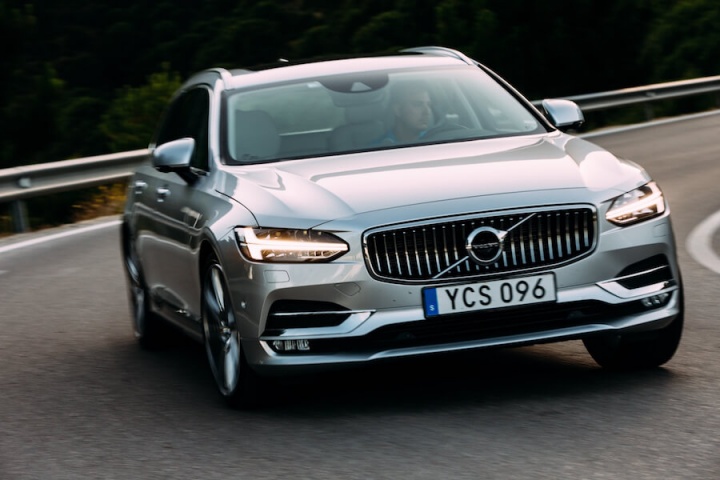 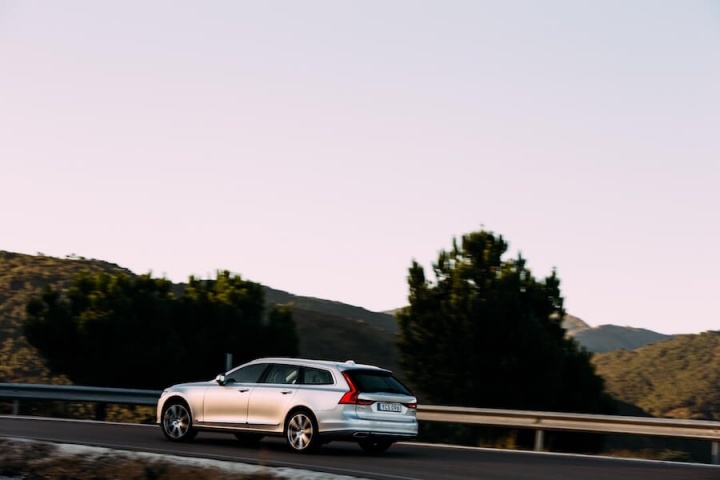 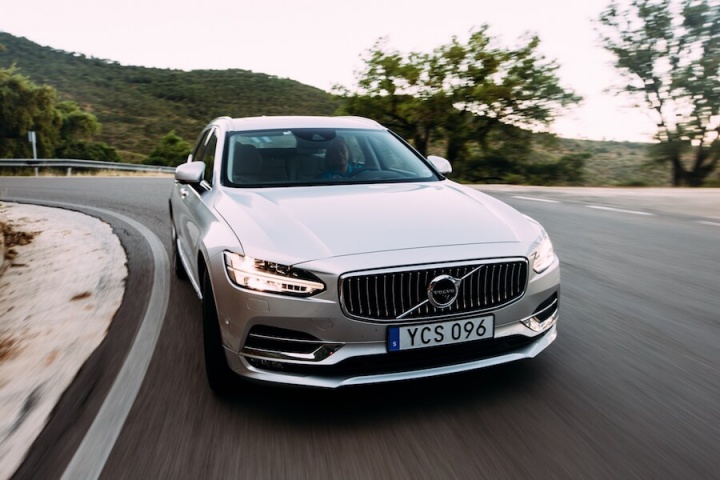 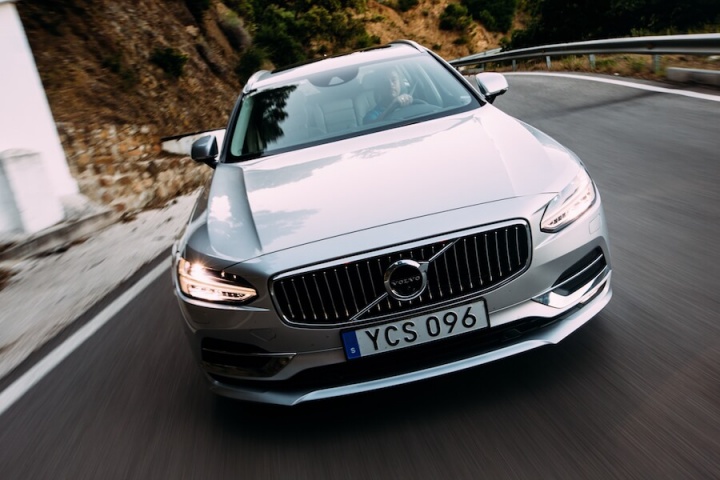 Even us estate-avoiding Irish love Volvo estates, and you're going to love the gorgeous new V90 reviewed here.

A new direction for Volvo's story was signalled by the Swedish company when it launched its XC90 SUV, and now we have the next chapter, the S90 and V90 cars. Here we review the V90 estate in its most powerful diesel guise and with all-wheel drive. It'll not be the biggest selling variant in Ireland, but it gives us a taste of what's to come. The big question is: can Volvo take the fight to the Audi A6, BMW 5 Series, Jaguar XF, Lexus GS and Mercedes-Benz E-Class?

Volvo's current design language has met with universal approval and the V90 is clearly from the same school as the XC90. They share the same distinctive radiator grille and headlights, the latter LED items as standard with the characteristic 'Thor's hammer' daytime running light signature. The family look includes sharp creases and simple surfacing along the side, along with the strong shoulder line from front to back. It's a wide, long, elegant looking car, though the rear lights aren't as distinctive as those on the S90 saloon. The Inscription version we drove rode on 20-inch alloys, though 18-inch rims are standard in Ireland with the D5 engine - or buyers can upgrade to stunning looking 21-inch wheels from the accessories catalogue if they wish.

If you like the exterior of the V90 then chances are you'll love the cabin. It's pretty much carried over from the XC90, which means it's a masterful piece of design. The upright touchscreen grabs your attention right away and it works well once you've learned where things are, but it's the quality and selection of materials used throughout that really impress, especially in the Inscription model, which has even softer leather upholstery and simply gorgeous (to look at and touch) Walnut wood trim. It feels luxuriously wide inside too and the driving position is distinctly low down, giving it a very different feel to the XC90. Of course, the V90 doesn't have seven seats, so it's all change in the back. The outer two rear passengers get loads of legroom (there's a raised centre floor section compromising that position, as in all cars in this sector) and the seat back splits and folds flat to allow carrying of longer items. The boot itself appears shallow with a high lip, but it holds a useful 560 litres - (same as the 5 Series Touring, five litres less than the A6 Avant, though the - about to be replaced - E-Class Estate swallows a massive 600 litres).

Treat this review as merely a hint at what to expect of the Volvo V90, as the test cars were specified with plenty of options. From a driving point of view, that includes 20-inch alloy wheels and air suspension, the latter with adjustable damping, considerably altering the character of the car. It's astoundingly effective and revealed that the V90 could be one of the most comfortable vehicles in the segment. It's never harsh, even in Dynamic mode, doing a superb job of rounding off the edges of the worst road surfaces we could find. And yet, body control is exceptionally good, with little roll and very little unwanted lurching or noticeable weight transfer no matter how you drive. Enhancing all this further was a level of quiet refinement that surpasses the XC90 and gives the new Mercedes E-Class a good run for its money.

Dynamically, there's little to fault the V90 on, but it stops short of inspiring you to take it out for a drive for the sake of it - it's just not that sort of car. The steering is meatier feeling than the XC90's, for example, and pleasingly linear, but it offers no information on how much grip there is available. In fairness, in the dry, with large tyres fitted, the answer is usually 'plenty'. Four-wheel drive is standard with the D5 engine, but in the warm and dry conditions of our drive there was never a need for the extra traction and no hint at which end the power was being sent to. When pushed harder into a corner than was prudent, the tyres eventually howled in protest before the car safely scrubbed off speed in a neutral manner, but the downside of this benign characteristic is that there's little in the way of engagement from the chassis.

The D5 engine has plenty of on-paper grunt, producing 235hp and 480Nm of torque, yet it never feels particularly fast, probably because this particular car weighs the wrong side of two tonnes. That lack of punch is despite the inclusion of what Volvo calls 'PowerPulse', using compressed air to help eliminate turbo lag in first and second gears from low revs. There's nothing to tell you it's working though, so without a non-PowerPulse car to try back-to-back, it's hard to say how effective it is. The eight-speed transmission is good, however, and that's standard across the range.

Although we don't yet have Irish pricing for the V90 estate, we do know that the S90 saloon starts at circa €48,000. We'd expect the estate to be a couple of grand more and offered with the same generous level of equipment and two trim levels. If so, that means the V90 Momentum will feature leather upholstery, electrically adjusted front seats, the nine-inch touchscreen system with satnav, Bluetooth, electric folding heated door mirrors, adaptive cruise control, Pilot Assist (semi-autonomous assistance for steering and speed up to 130km/h), keyless start, automatic wipers, auto lights including Active High Beam, dual-zone climate control and a wealth of safety equipment, such as City Safety, Road Edge Detection and Driver Alert Control with Lane Keeping Aid. The Inscription version adds Nappa leather, an active TFT digital instrumentation display and lots and lots of styling and material upgrades to give it an ultra luxurious feel.

Audi A6 Avant: more dynamic and of very high quality, but we reckon the Volvo's interior trumps it.

BMW 5 Series Touring: the only estate in the class that truly appeals to keen drivers, and there's a brand new 5 Series coming in 2017...

Mercedes-Benz E-Class Estate: comfy, spacious and not bad to drive, though an all-new one is just around the corner.

Like the XC90 before it, the new Volvo V90 grabs attention with a blend of attractive and unique exterior styling and a gorgeously appointed cabin that stands out from the norm. The D5 AWD model won't be for everyone, but the likely most popular D4 variant comes with pleasingly low running costs that should appeal to company and private buyers alike. Where the S90 saloon has its work cut out to convince brand-loyal executive buyers to try something different, Volvo wagons are a known entity and the V90 is the company's most impressive estate yet.