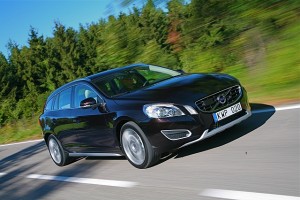 CompleteCar.ie is the first Irish site to drive the stylish new Volvo V60

Form follows function in Volvo's new V60, with form evidently the primary function. Is Volvo radically departing from its tradition of 'boxy but good' estates?

Volvo has come over all stylish recently, with the just-launched S60 leading the charge. This new V60 continues the trend. Note that Volvo isn't calling the V60 an estate. Apparently it's a Sports Wagon, in the vein of cars like the Alfa Romeo 159 Sportwagon or Peugeot 407 SW. So this is a Volvo that you can't get a washing machine - or in fact much of anything else -in the back of.

The interior is lovely though, with simple Swedish design and ease of use mixing in a well-built package. The rear seats fold in a useful 40/20/40 fashion, while the passenger seat back flips forwards for longer loads. But otherwise the V60 is more about how it looks than how it operates.

You're paying for a smart looking Sports Wagon that's comfortable and well specified. The trade off of the small boot is a decently-sized rear passenger compartment, with leg- and headroom better than in most rivals. There's City Safety as standard too, a system that can prevent low speed impacts - up to about 30km/h - by slowing the car automatically.

Spend some time on the options list and you can fit a massive array of safety kit to it, though some might prefer to live without the blinking lights and audible bongs that accompany the lane departure and blind spot systems. It's safe enough in standard guise, while regular equipment like alloy wheels, climate control, electric windows and cruise control are likely to be included across the entire range when it arrives in Ireland in 2011.

Although it's compromised as an estate, Volvo promises the V60 will drive with dynamism new to the brand. First impressions suggest that's simply not the case, as it drives exactly like the S60 that beat it to the showroom. Any of its premium German rivals is a more entertaining drive, too. Like the S60 the V60 is better at comfort than sharp, pulse-raising driver interaction.

The suspension is nicely supple though, isolating nasty surfaces and making for a smooth ride. However, the steering is lifeless, with strange weighting, while the manual gearshift isn't the last word in accuracy. Forget incisive cornering then, as the Volvo V60 is better at comfortable cruising. And there's absolutely nothing wrong with that.

Diesels will make up the vast majority of sales. The 2.0-litre D3 turbodiesel with 163hp and 400Nm of torque has more than enough urge to haul the V60 along with ease. It'll reach 100km/h in 9.4 seconds, max out at 220km/h and use around 5.6 litres/100km. It's largely quiet too, with the characteristic five-cylinder Volvo rumble only really apparent if you rev it hard. Not that you'll need to. Factor in hushed wind and road noise and the V60 is a nice place to eat up big miles in.

Volvo isn't kidding when it says you shouldn't consider the V60 to be an estate. The boot with the seats in place offers just 430 litres of capacity. To put that into perspective that's 50 litres less than a Skoda Fabia Estate has, and some 203 litres less than the Superb Estate. A Ford Mondeo hatchback betters the V60 too, while even BMW's 3 Series Touring can muster 30 litres more capacity than the Volvo with its seats up. As a final blow to the car's practicality credentials, the V60's smaller V50 relative is only 13 litres less capacious.

With the Volvo S60 already filling the form brief we'll admit to being disappointed that the V60 isn't a bit more about function. It's undoubtedly a good looking car, but premium rivals are better to drive, while many mainstream competitors eclipse it for usefulness. Given Volvo's history of capacious, practical estate cars we're not sure why the V60 so determinedly takes another path.