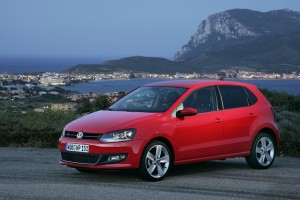 A miniature Golf in all but name, the new Polo shares a design language with its bigger relative. It's similarly solidly built, classily appointed inside and refined too, making it the perfect choice for buyers wanting a Golf, but facing a hole in their finances.

The similarities between Volkswagen's Golf and the new Polo are striking. At first glance the new Polo could well be mistaken for the bigger car. That's no bad thing really as the Golf is highly respected among the chattering classes, with kudos that's well above its mainstream rivals. The Polo is nicely positioned as its understudy. The rear lights are the most obvious difference between the two cars, but other than that it's like looking at a Golf parked in the distance. Longer, lower and wider than the old Polo, the new car undoubtedly looks sharper and more dynamic: it's likely to appeal to a wider audience than its rather dowdy predecessor - without putting off existing buyers.

Aside from being one of the best looking superminis on sale, the new Polo receives a decent amount of standard kit. The Polo comes with a choice of Trendline, Comfortline, Highline and BlueMotion models and the Trendline, while pretty basic, does at least get electric front windows, remote control central locking, electric and heated exterior mirrors and an electronic immobiliser. Comfortline models gain 'climatic' air conditioning, 15-inch steel wheels, front fog lights and chrome highlights on the interior. The Highline model has 15-inch alloy wheels, front sport seats, a three-spoke leather steering wheel, front centre armrest and a multifunction display with tyre pressure indicator.

Lighter, lower and wider than the outgoing model, the Polo promises a sharper and more involving drive than its capable, but rather insipid predecessor. It's certainly a step forward from VW for its supermini but it's not able to match Ford's Fiesta for outright dynamism and behind the wheel, grin-inducing handling. The Polo's steering is decently weighted, but low on information, the first real indication that you're reaching the car's cornering limits being squealing from its Michelin energy tyres. Neat and tidy if you're not in too much of a hurry, it rides well - even when specified with larger alloy wheels - and insulation is good; wind, road and engine noises being nicely isolated from the cabin.

The driving position is excellent too, the firm seats offering great support and comfort. The dashboard is tidy and the instrumentation very clear; neat touches include a lidded cubby within the glovebox to hold the Polo's manual, while not-so-clever details include an armrest between the driver and passenger that, when down, obstructs both the gearshift and handbrake. Three petrol engines are available: two 1.2-litre units with 60- or 70bhp and a TSI turbocharged 1.2-litre with 104bhp. Joining them are two turbodiesels, a 75bhp 1.2-litre in the BlueMotion model and two 1.6-litre diesels in 75- and 89bhp outputs. Only the 1.2-litre TSI petrol engine feels particularly brisk, the diesels smooth and economical, but not offering the slugger-punch mid-range that we'd hoped for.

The new Polo is a good deal more economical than its predecessor, VW claiming as much as a 20 percent fuel economy saving. That's largely down to it being a little lighter and advances in engine, aerodynamics and tyre technology. The diesels - in either output - boast a 4.2 l/100km official combined fuel consumption figure, but if you're really after a fuel-sipping Polo then you'll need to get the BlueMotion version. It features stop-start, regenerative brakes, a 75bhp three-cylinder turbodiesel and drag-reducing aerodynamics and tyres to enable it to achieve a provisional combined consumption figure of 3.3 l/100km.

Volkswagen's new Polo isn't about to go chasing a Ford Fiesta down a back road, but its mature-feeling drive, refinement and comfort allied to decent - if unremarkable - dynamic ability and capable performance make it a very rounded supermini. It's classier than anything else available, feels nicely built, has decent space and is refined. Grown up then, but still enjoyable enough to drive to put it in the mix for driver pleasure among everything but Ford's standout Fiesta and its close Mazda2 relative.