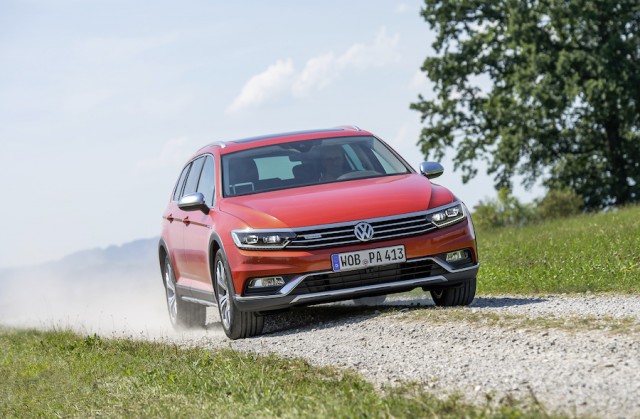 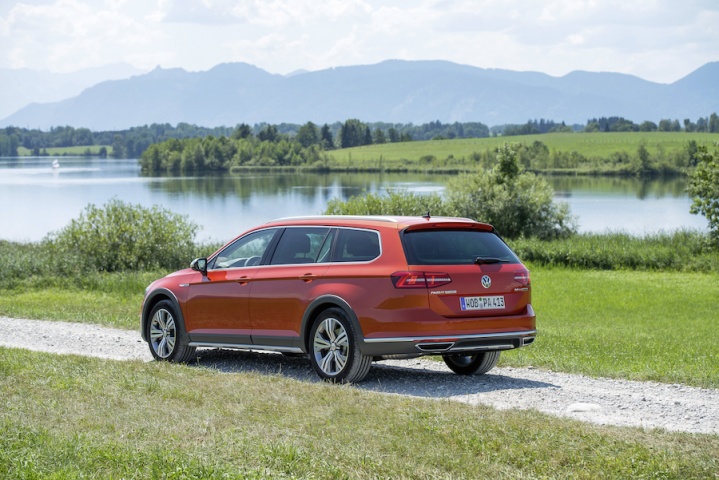 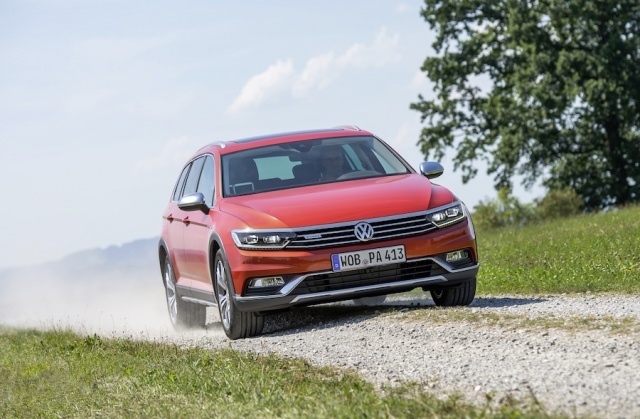 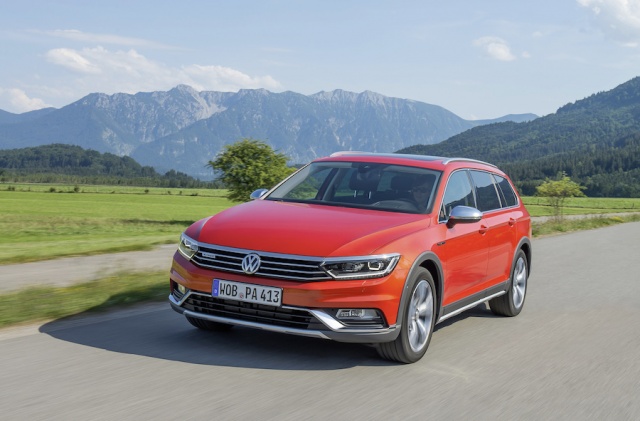 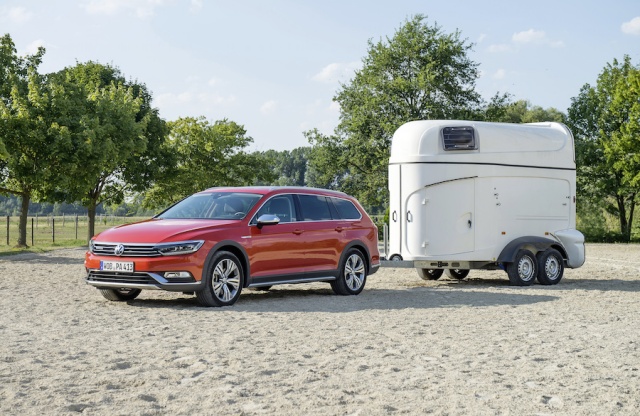 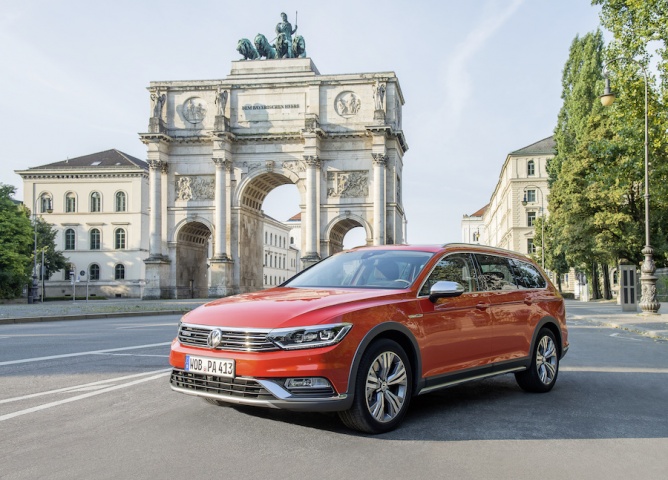 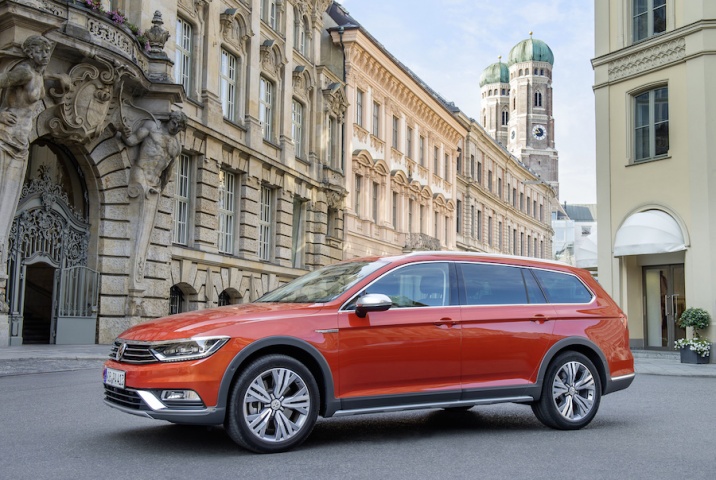 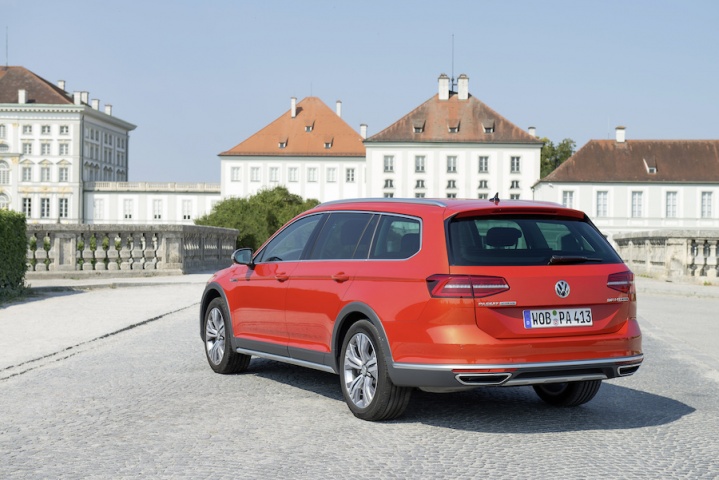 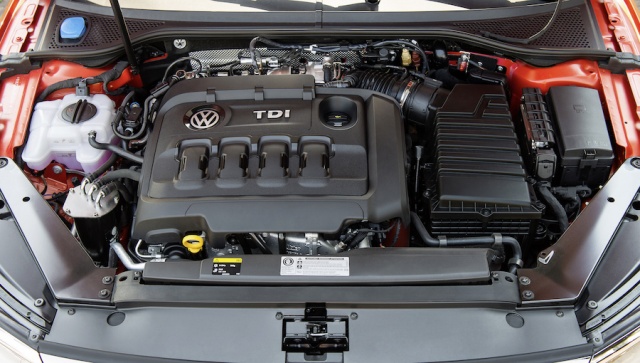 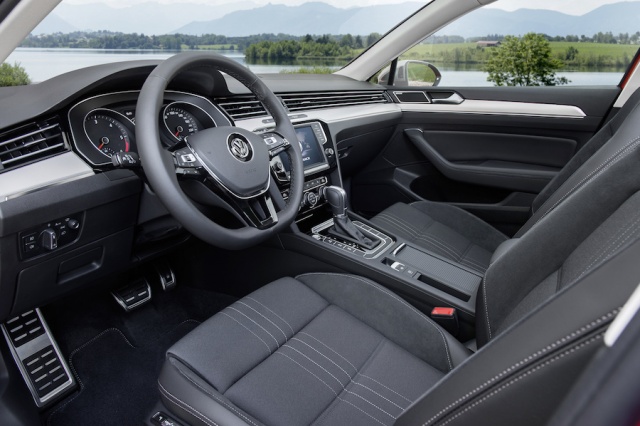 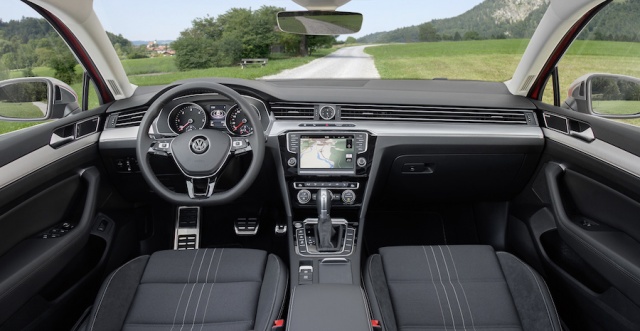 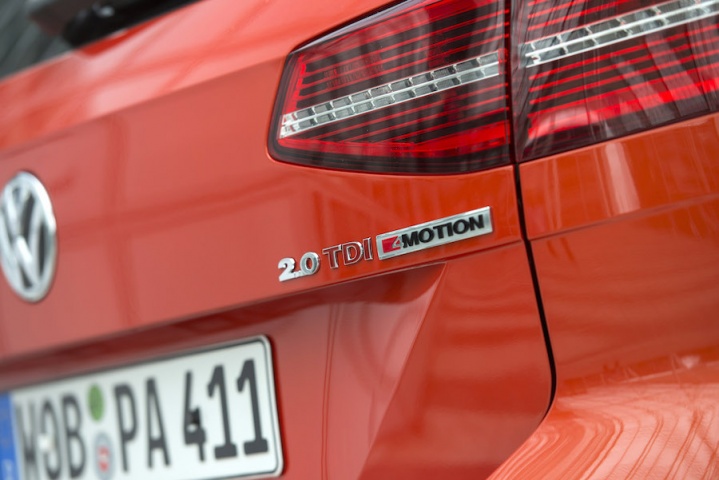 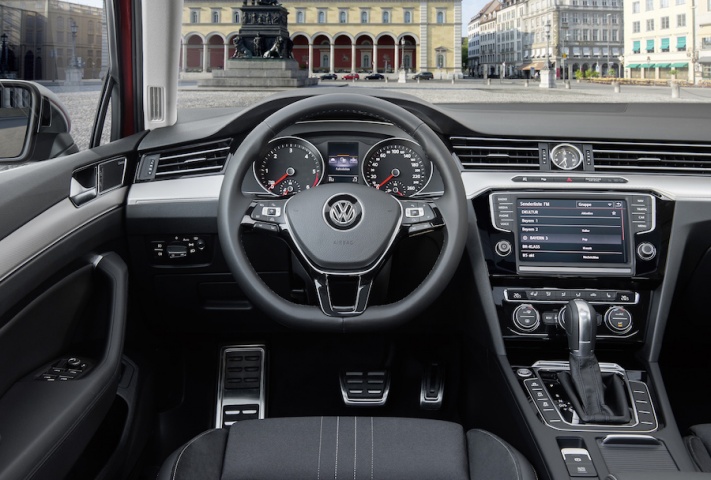 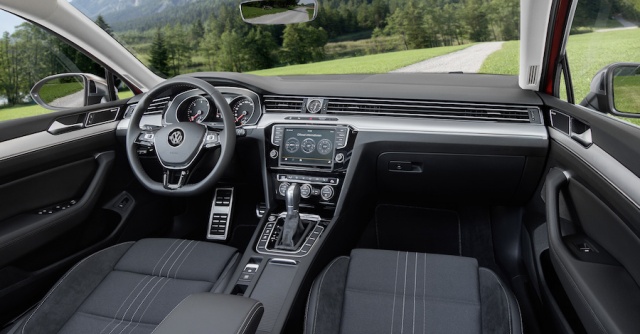 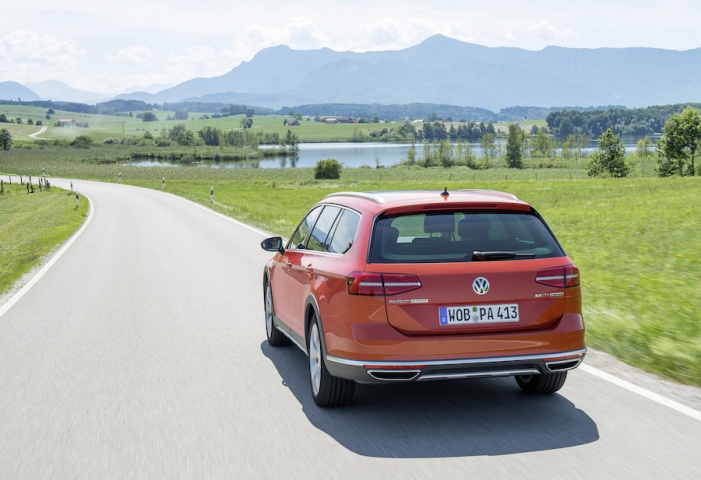 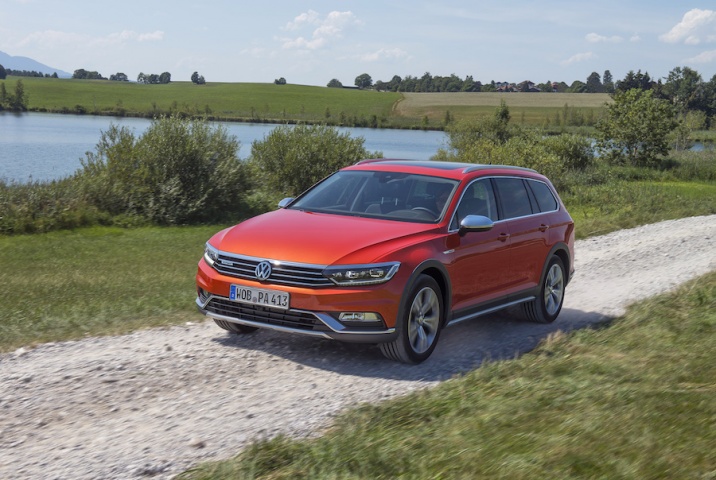 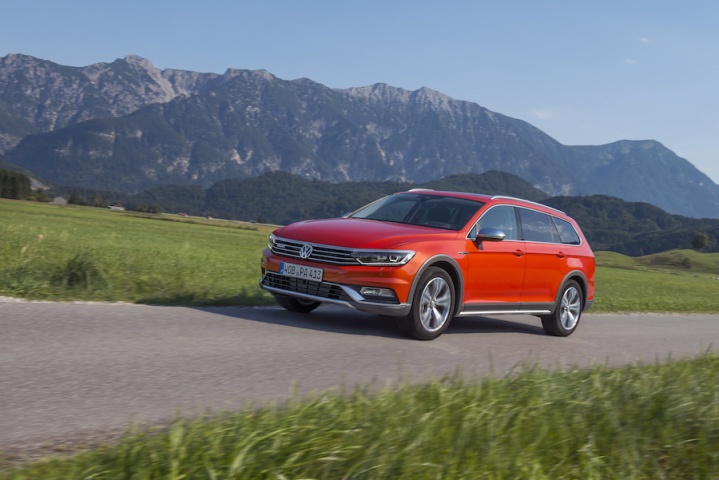 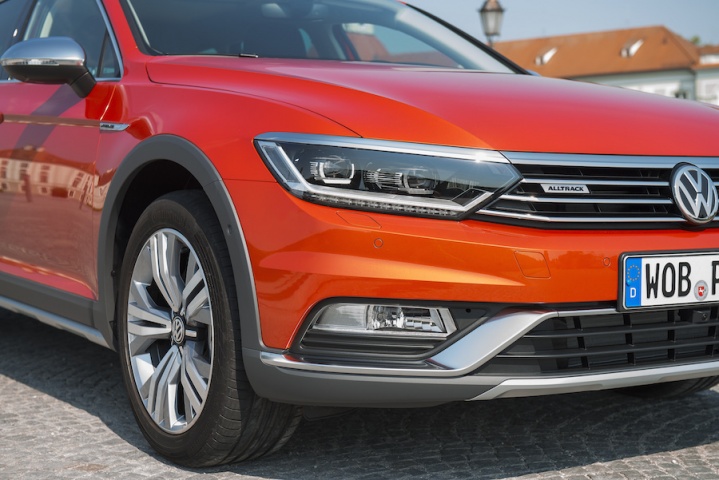 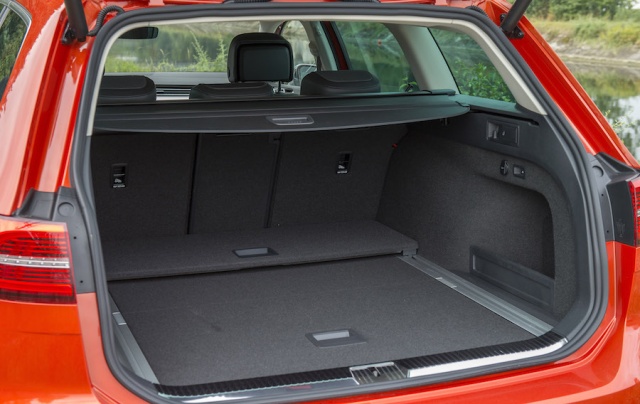 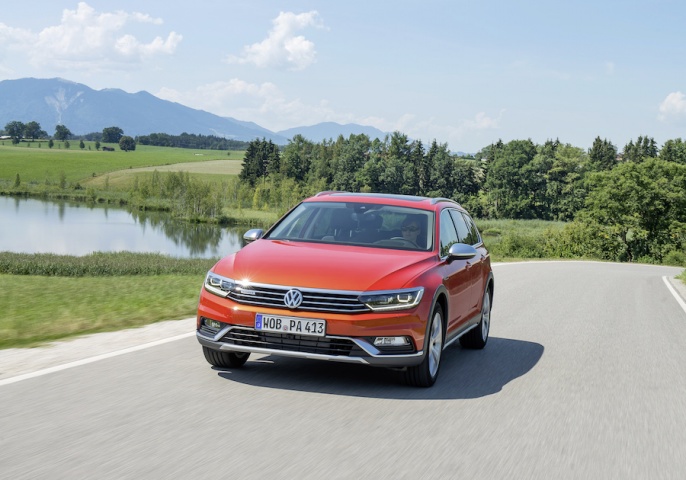 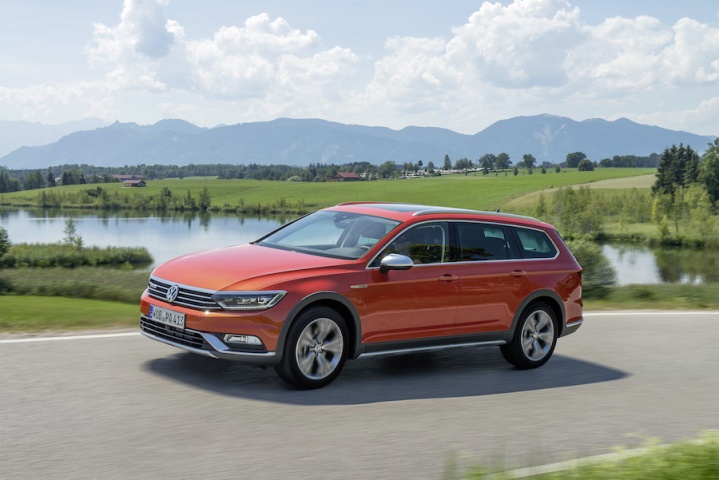 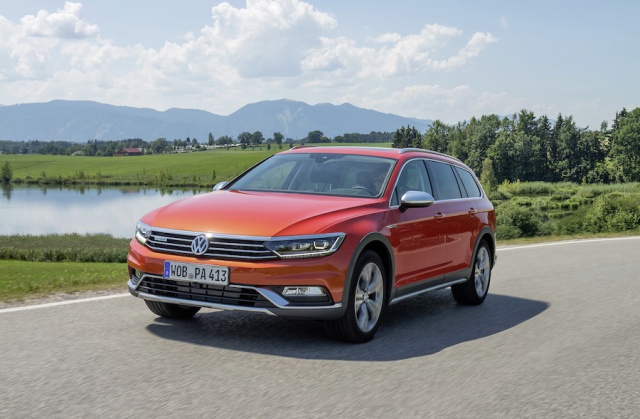 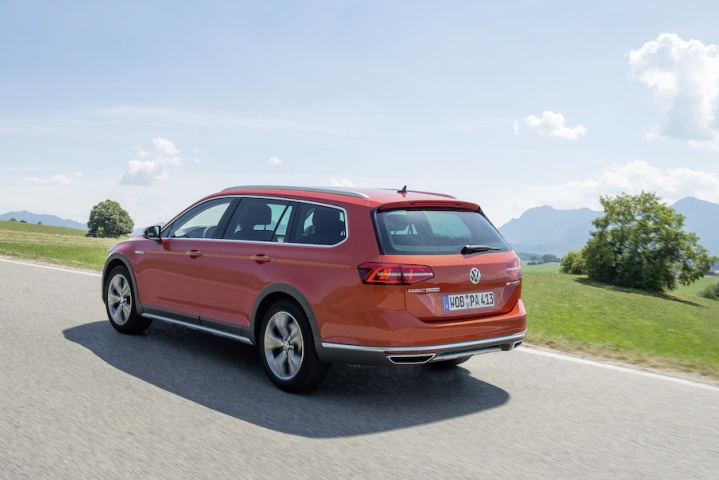 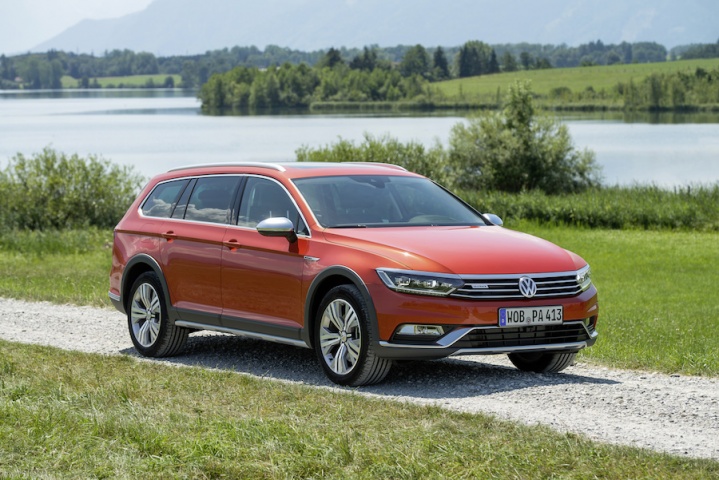 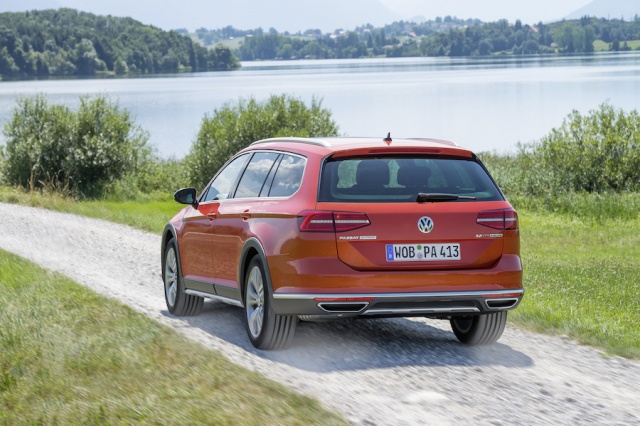 Taking the luxurious off-road estate recipe as seen on the Golf Alltrack offered in other markets, Volkswagen creates the cultured and visually appealing Passat Alltrack, the second generation of this particular model. With a powerful, smooth diesel engine and great ride, the off-road Volkswagen estate is a thoroughly likeable package.

With the usual addenda of this sort of vehicle all present and correct - lower body plastic cladding, silver detailing for mirrors and roof rails, different alloy wheel designs and a ride height increased by 27.5mm over a regular estate model to 174mm ground clearance in total - the Volkswagen Passat Alltrack is probably the finest looking variant of Wolfsburg's D-segment challenger yet. It wears the additions really well and it still looks like a premium piece of kit, with subtle badging and some neat, trapezoidal design flourishes to further signify its all-surfaces potential.

Inside is the usual excellent MkVIII Passat interior, yet once again it's not hugely differentiated from what you'd find in a two-wheel drive, lesser model of the car. Only an 'Alltrack' logo in front of the gear lever remains visible once you're inside and on the move - the embossed branding on the seats and door sills is obviously obscured from view. Nevertheless, this is a fine, humongous cabin made to the highest standards, although the beautiful TFT instrument cluster cannot be specified on right-hand drive Passats until 2016, so we'll have boring old analogue dials for now.

Final note: the Alltrack has a marginally smaller boot than a regular Passat Estate, seeing a reduction of 11 litres with rear seats both up (639 litres) and down (1,769 litres) thanks to the four-wheel drive and raised ride height altering the load bay. That's still capacious, though, and with its 1,705kg kerb weight, all-wheel drive and torquey engines, it's also a strong tow car that's capable of hauling 2,200kg of braked trailer.

Just two diesel models will be offered in Ireland, both 2.0-litre four-cylinder units mated to the Haldex four-wheel drive system. That runs in front-wheel drive mode until it detects slip, when it shunts torque back to the rear axle in a near-instant fashion. The 150hp/340Nm entry model is mated to a six-speed manual gearbox and emits 130g/km CO2, just sneaking it into Band B1 for road tax and saving €10 a year compared to the 190hp/400Nm version we drive here - this comes with a super-slick six-speed DSG dual-clutch automatic only. That results in 137g/km emissions.

Because the ride on this thing is excellent. Body control is strong whether you're cruising down a motorway or tipping the big Passat into a bend, which means that queasy passengers shouldn't be an issue, while the damping is fantastic. On 245/45 18-inch tyres, there are no seemingly no road surfaces that upset the Passat Alltrack's dignified composure.

It also provides plenty of performance, our car easily attaining 215km/h on an autobahn blast, without ever becoming noisy or introducing vibrations into the cabin. The handling is fine, safe and secure in a way that makes it a breeze to punt the Passat along a flowing open road without ever approaching the sort of level where we can talk about true, invigorating driver interactivity. The brakes are magnificent and the steering is nicely weighted, so everything is in place to ensure the Alltrack is, by way of compensation for its lack of chassis sparkle, extremely easy to drive in all situations.

We'd also love to tell you it is capable off-road but Volkswagen didn't give us the opportunity to try its rough-surface prowess at the launch event. There's an Electronic Differential Lock, Hill Start Assist, Hill Descent Assist and a special 'Off-Road' setting in the drive modes, which - with the increased ride height - should see the Passat capable of dealing with moderately challenging terrain.

The Alltrack's pricing and specification is based on the Comfortline model, meaning it is well equipped - including three-zone climate control, a leather multifunction steering wheel, the bespoke Alltrack seats, all-round parking sensors and 6.5-inch touchscreen infotainment as standard, among many other toys. However, that also means it's at the more expensive end of the range. Volkswagen Ireland will also offer its Business Edition upgrade for the Alltrack at €1,600, which will throw in Discover Media navigation, Light Assist and improve the cruise control to adaptive for that money. Bear in mind a Comfortline Business Edition Passat Estate costs from €32,225, but expect the Alltrack to protect its value well on the used car market.

Audi A4 allroad: we're due for an all-new model in 2016, as the latest A4 is making its debut right now. The allroad has a similarly classy character to the Passat Alltrack.

BMW 320d Touring xDrive: just facelifted. Same power and torque as the Volkswagen, with all-wheel drive too, but no extra ride height or body cladding. Not as scintillating to drive as older 3 Series.

Opel Insignia Country Tourer: a pretty good effort from Opel, offering comparable space and kit to its rivals for less cash. Interior is not very special, though, and a new Insignia is on the way.

The Volkswagen Passat Alltrack commands a premium over regular, two-wheel drive fare elsewhere in the range and it remains rather uninvolving to drive quickly. But in all other respects it's a huge success, blending a creamy ride and exceptional refinement with a muscular, pleasant drivetrain. The added safety net of all-wheel drive dependability and its towing capabilities mean the Alltrack moves to the top of the D-segment crossover estate market (for now) and also becomes our favourite version of the latest Passat.