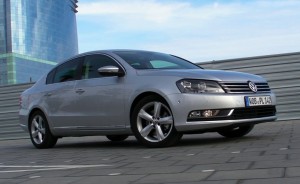 Volkswagen's Passat enters its seventh generation, which is likely to remain a huge success in Ireland.

Think of the new Passat as 'Phaeton-lite' when it comes to design and styling. There has been no platform change and no significant alteration to the dimensions for the new car, but there have been significant updates to the exterior design and Volkswagen has adopted many of the Phaeton luxury car's styling cues. This is likely to do more to sales of the Passat than the other way around.

There is a new grille with four cross bars, so a narrower grille with two cross bars are for models beneath the Passat and Phaeton in the VW line-up. Volkswagen says that the new Passat follows the latest Volkswagen "design DNA" and this front-end gives the car a more aggressive look.

The new dual headlights do give the car a more upmarket appearance and the side profile now makes the car appear to sit a lot lower than before. There is a reduced wedge shape compared to the previous model and the rear lights now wrap around into the wings. It looks like a refined and gently tweaked version of the current car, but it all works well. It isn't overwhelmingly different but it is better than before.

Inside, the quality of the cabin is very good. Gone is the troublesome and fiddly electronic handbrake, which has been replaced by a similar system, but with a much more assured operation. The controls are simple, well-laid out and free from gimmicks. Existing Passat customers won't be one bit lost, while new customers will slot in pretty easily too.

There is quite an extensive engine range available for the Passat, but the core sellers in Ireland will be the entry-level 122hp 1.4-litre TSI petrol and from the diesel range, a 105hp 1.6-litre and a 140hp 2.0-litre.

Both the 1.6-litre and 2.0-litre diesel engines have sub-120g/km emissions, putting them in motor tax Band A and all diesel versions now come with stop-start as standard. Volkswagen Ireland says that about 60 percent of all buyers will go for the 1.6-litre diesel with the rest split evenly between 1.4-litre TSI and 2.0-litre TDI. Only a handful of buyers are expected to go for the 2.0-litre 170hp diesel, or indeed the estate or versions with a DSG automatic gearbox.

We spent the majority of our time in the car that will make up the majority of sales, the 1.6-litre 105hp diesel. As you might expect it isn't particularly potent. Sure enough, the torque figure of 250Nm isn't bad, but it does take 12.2 seconds to get to 100km/h. It doesn't feel slow, but there are dead spots and the torque feels like it only comes in short bursts.

Better - much better actually - is the 140hp 2.0-litre TDI and with the fact that this now is a Band A car there might be a move towards this, but obviously there is likely to be about a €2,700 price walk from the 1.6-litre diesel to the more powerful 2.0-litre unit and maybe buyers will choose to go for a higher spec car instead with the smaller engine.

The Passat feels like a more refined car than before, which appears to have been the aim. The gearchange is certainly smoother and the steering feels more communicative than before. The seats are comfortable yet supportive and this is very much a car designed with lots of mileage in mind. We know already that these diesels are capable of lots of kilometres between fill-ups.

The Passat doesn't feel as overtly sporty to drive as say a Ford Mondeo or perhaps Mazda6, but it betters those cars in every other regard.

The Passat comes in three grades, starting at the base Trendline level, which has 16-inch steel wheels with hubcaps, but you do at least get manual air conditioning, all-round electric windows, aux-input for your iPod, ESP stability control and lots of airbags. Add another €1,900 and Comfortline grade adds the 16-inch alloy wheels, climate control and a multi-function display to name but a few. Another €1,800 gets you the Highline model, which boasts 17-inch 'Michigan' alloys, Alcantara bits for the upholstery, heated front seats, a CD changer, tyre pressure monitoring system and a full size spare wheel.

The DSG double-clutch automatic transmission will add a massive €2,700 to the price, but it is a great gearbox.

The Variant model (estate) is also available from launch, although in Ireland there is a very small uptake on this version. In Germany, around 80 percent of all Passats sold are Variants. Expect to pay around €1,800-€2,000 more for the estates compared to the saloons.

The best car in the segment? Well if it wasn't before then it is now. It looks more refined, feels more composed and both of the key diesel engines are now more efficient and in motor tax Band A.