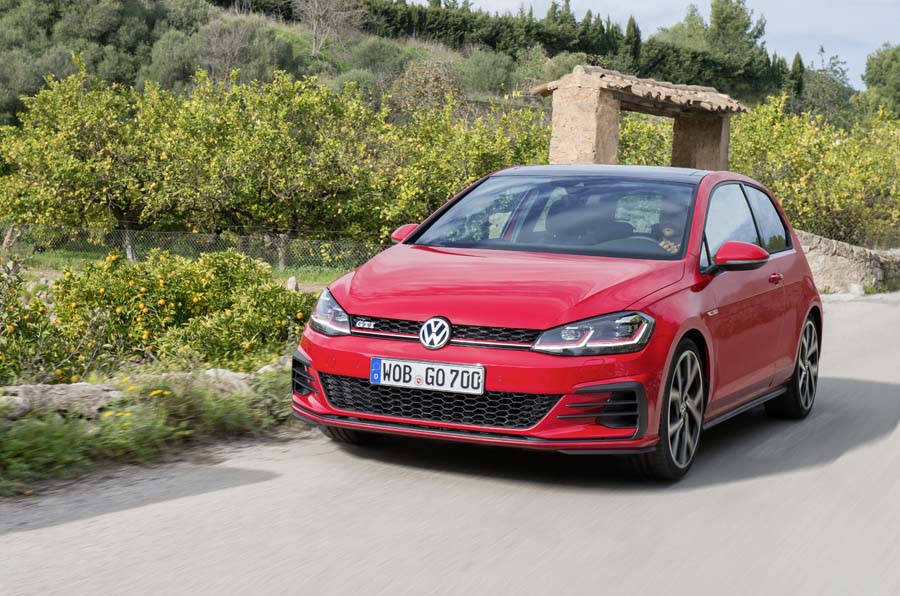 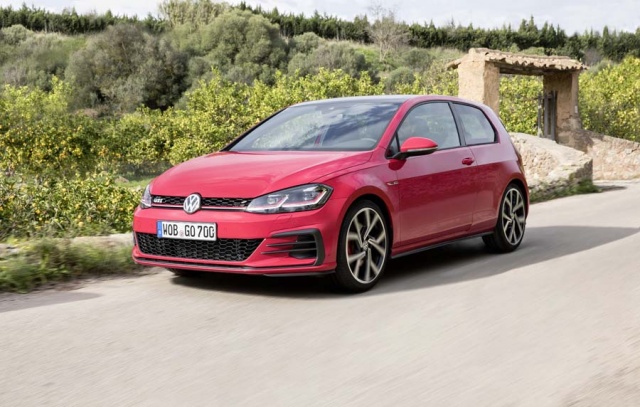 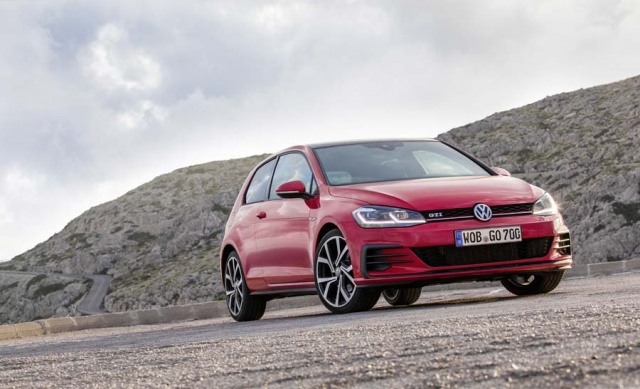 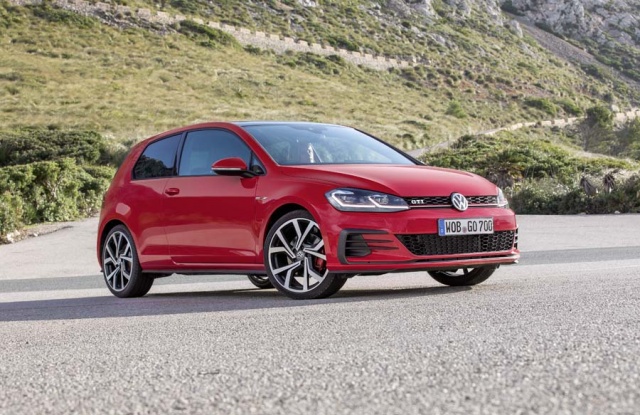 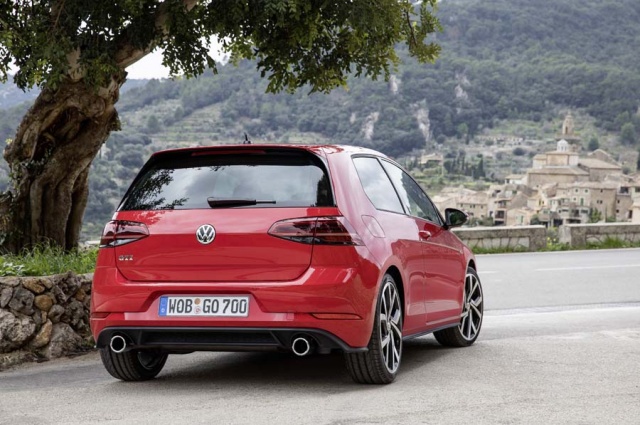 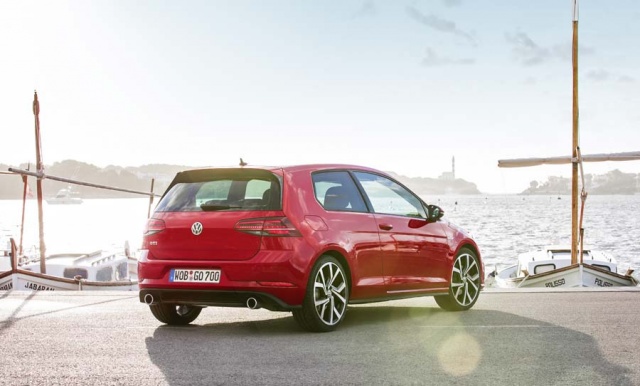 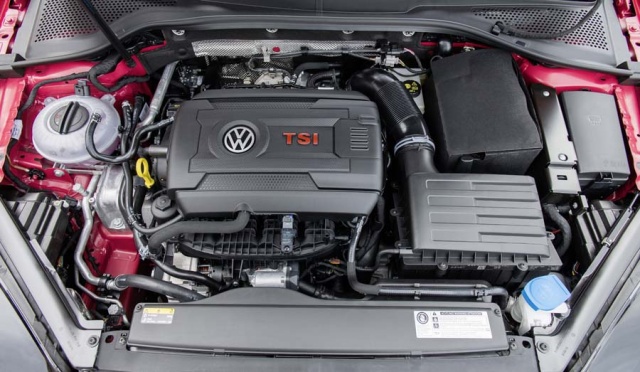 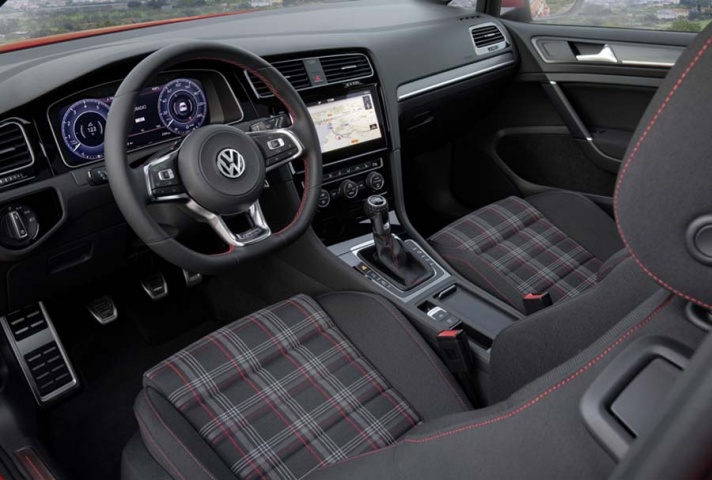 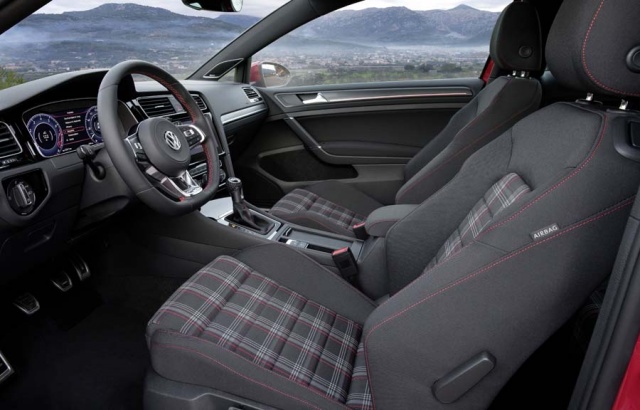 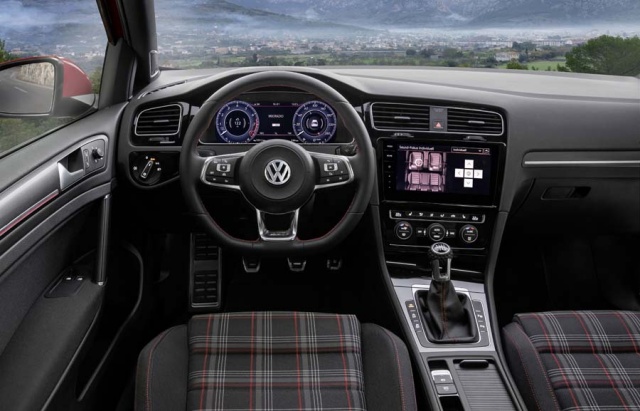 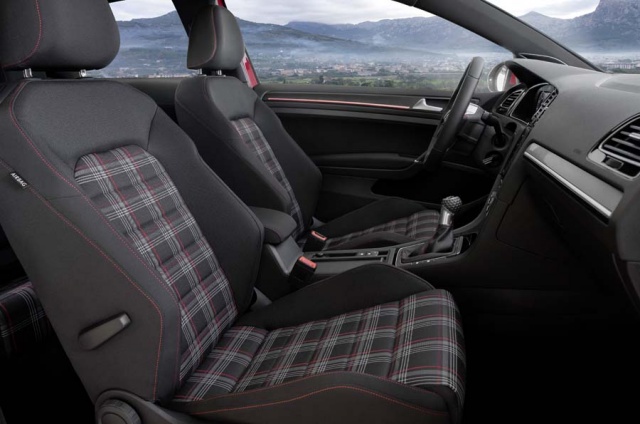 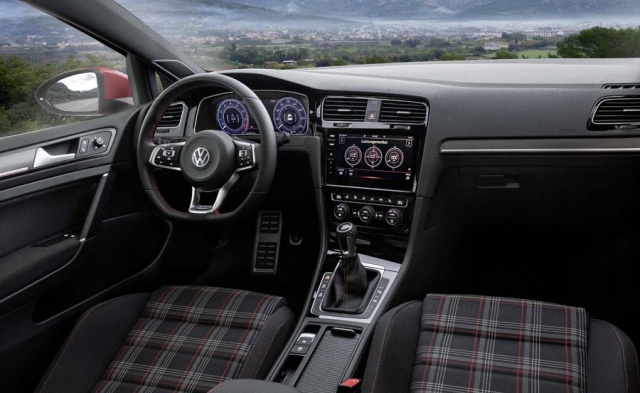 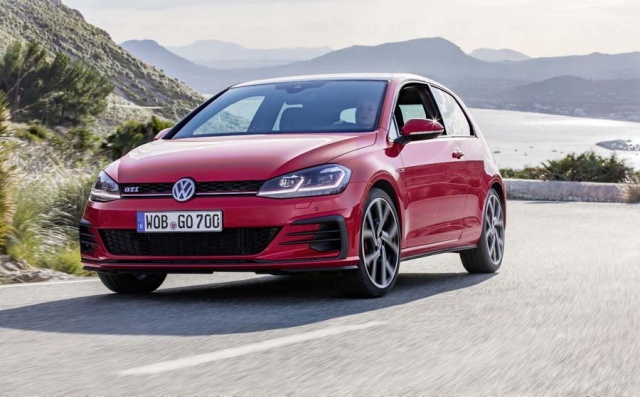 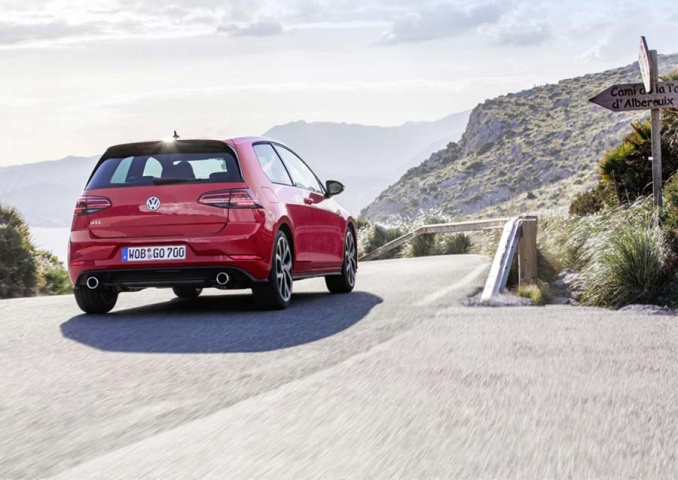 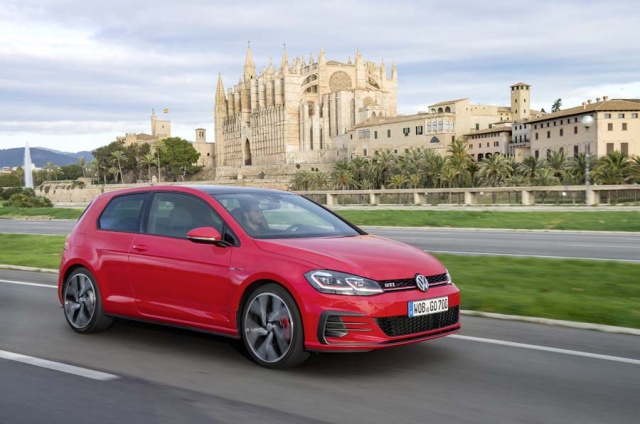 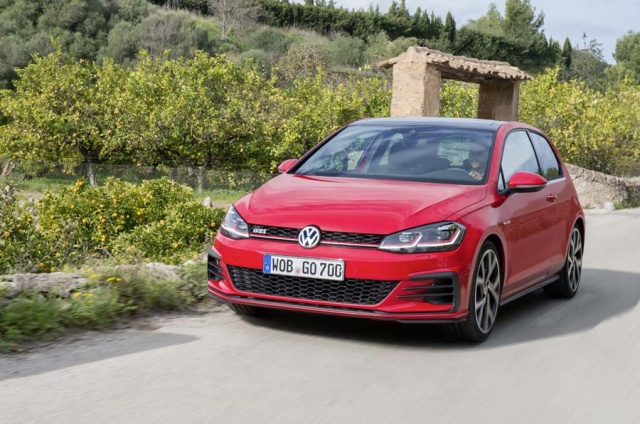 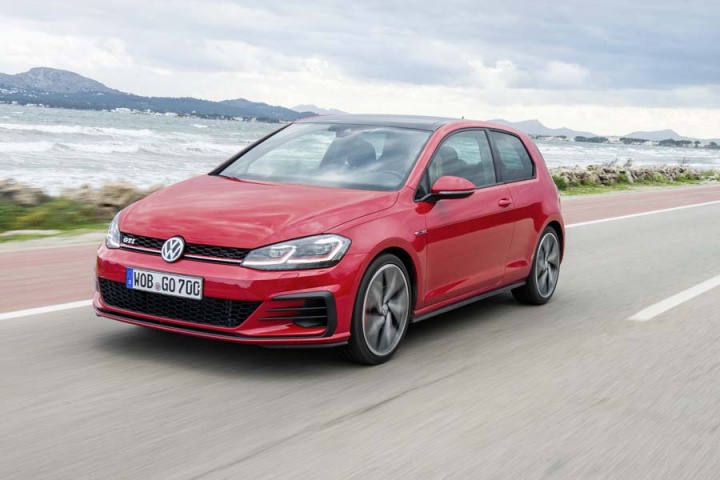 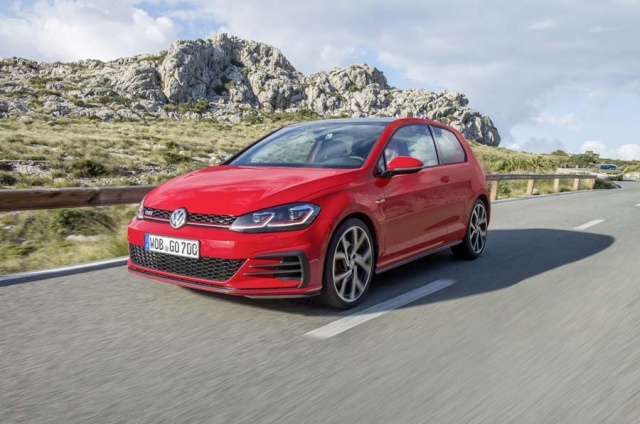 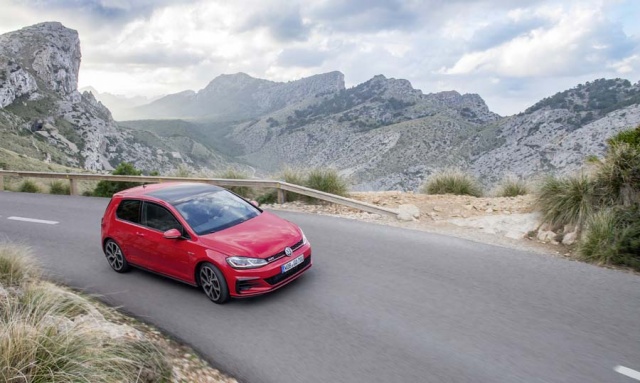 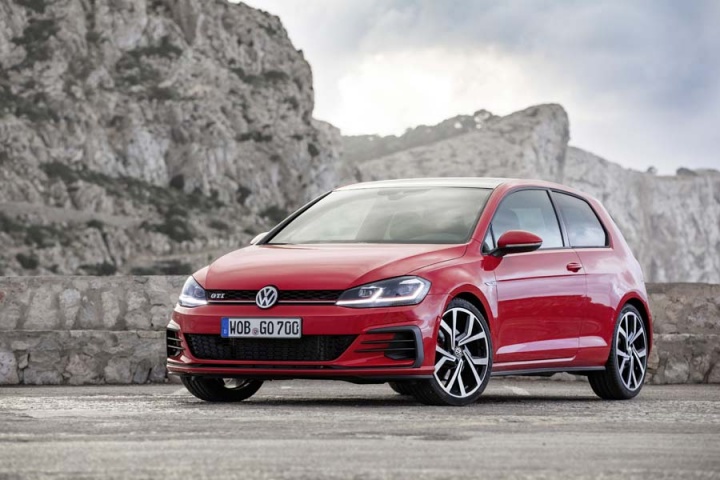 Mildly updated Golf GTI gets more power and more technology and it remains the benchmark.

There are faster, and arguably there are more exciting fast hatchbacks on the market, but the Volkswagen Golf GTI is still the best one. Here we test drive the updated-for-late-2017 version with more power and technology than before and subtly updated looks too.

Volkswagen has fractionally updated the exterior styling of the GTI, in line with the updates for the rest of the Golf range. The biggest change is the new headlights, which are full LED units for this new model. Volkswagen and GTI bores will be able to spot the new car by the faint red highlight that runs under the main LED units, but the rest of us will struggle to notice any change. There are new all-LED rear lights too.

The changes in the car's electronics systems are more profound, and include the option of a new nine-inch touchscreen with (mostly pointless) gesture control for some functions. There's also the option of the rather classy-looking 12.3-inch TFT screen Active Info display, which replaces conventional analogue dials. Needless to say, the systems can now connect to your phone, access the internet, function as a Wi-Fi hotspot, find information on prices for parking and petrol, fetch live news feeds and so much more. There's even an option to have a doorbell and electric locking system for your house connected to the car so that you can let the neighbours in to feed the cat if you've gone for a long drive in the mountains.

There's also a boost in safety levels with city braking now featuring pedestrian protection, traffic jam assist, which actually takes over the driving at low speeds in creeping traffic, emergency assist that can call for an ambulance if it detects a crash or which can bring the car safely to a halt if it senses that you've fallen asleep or passed out, and much more.

Of course, this is the GTI so we're possibly not quite as bothered about the electronic sub-systems as we would be in the regular Golf. Here, we're more interested in power and the GTI gets some more of that - standard models now come with the 230hp engine, which used to be an option, while Performance Pack versions will now feature a 245hp version of the 2.0-litre petrol turbo unit. The standard GTI still doesn't benefit from the electronically controlled differential that you get on a Performance Pack car, but it does come with the XDS electronic system (which Volkswagen refers to as a differential, but is really just a clever braking system) as standard. There's also a new version of the seven-speed DSG automatic gearbox, but we've tested the six-speed manual model here.

It was rather educative to have a spin in another Volkswagen GT model, the Golf GTD estate, just before we stepped into the GTI. The GTD estate doesn't come to Ireland, for various reasons, but mostly related to (a) tax and (b) the fact that we don't really buy estates much. With its 184hp diesel engine, it has impressive performance, good refinement and sharp handling, but basically it feels like a regular Golf diesel with more poke and a rather pleasing body kit. It's handsome, competent, quick, but ultimately just a touch soulless.

Hopping straight from the GTD into the GTI (a red, five-door hatch in this case) was like taking a mouthful of HB Solero and then taking a spoon of incredibly sharp lemon sorbet, made by the pastry chef at El Bulli - they both contain roughly similar ingredients, but the effect is quite, quite different.

The GTI's steering is just in another league to that of the GTD's and indeed the rest of the Golf range. Volkswagen has managed to find a weighting and a sense of responsiveness that feels closer to that of a dedicated sports car than a family-friendly hatch. Indeed, it's so good that you wouldn't be surprised to hear that engineers from Volkswagen-owned Porsche had been sneaking in at night to tweak the GTI prototypes. It even has proper feel and feedback, albeit slightly muted by the electric power assistance.

Without the extra weight of the diesel engine in the nose, the GTI responds far better when you reach a corner, tucking the nose in directly, and without slack or hesitation. There is a hint of understeer if you take too many liberties, but a gentle lift of the throttle restores neutrality and the GTI will power through almost any corner you care to suggest without a whiff of drama.

Which is not to say without a whiff of excitement. While the GTI is refined and capable, it doesn't distance you too far from the process of driving, making the meat-based component feel just as important as any of the metal or electronic ones. It's fluid and fantastic, and feels fun even when you're not wringing its neck. The far more expensive Ford Focus RS has more explosive performance and balance, but the GTI is more affordable, easier to live with and still creams the more-comparable Focus ST for handling honours.

The Golf's engine is also a peach, delivering peak power over a wide rev range and with diesel-beating torque on offer low down. Dial everything back and you could potentially hit 45mpg in daily driving, but that would be something of a waste, now wouldn't it?

All models come with two-zone climate, LED headlights, city braking with pedestrian detection, 17-inch alloy wheels, a leather trimmed steering wheel and gearshift, sports suspension and sports seats in that distinctive, retro tartan trim (please, don't spec your Golf GTI with leather...). Prices will likely increase slightly when this new model starts to arrive, but not by much, which means you can still by one of the very best cars around, of any class or size, for under €40,000.

Minor changes up top, more major changes under the skin, but the Volkswagen Golf GTI has retained its place at the peak of the fast hatch rankings. Close to peerless. 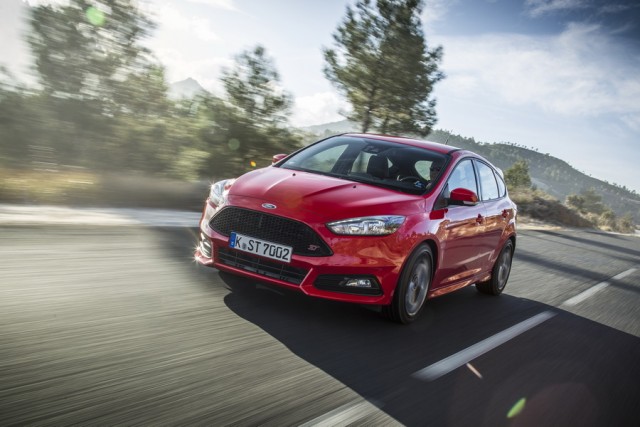 Ford Focus ST review
Ford Focus ST vs. Volkswagen Golf GTI: Focus has big-hitting 250hp engine, but it's not as slick as the Golf. 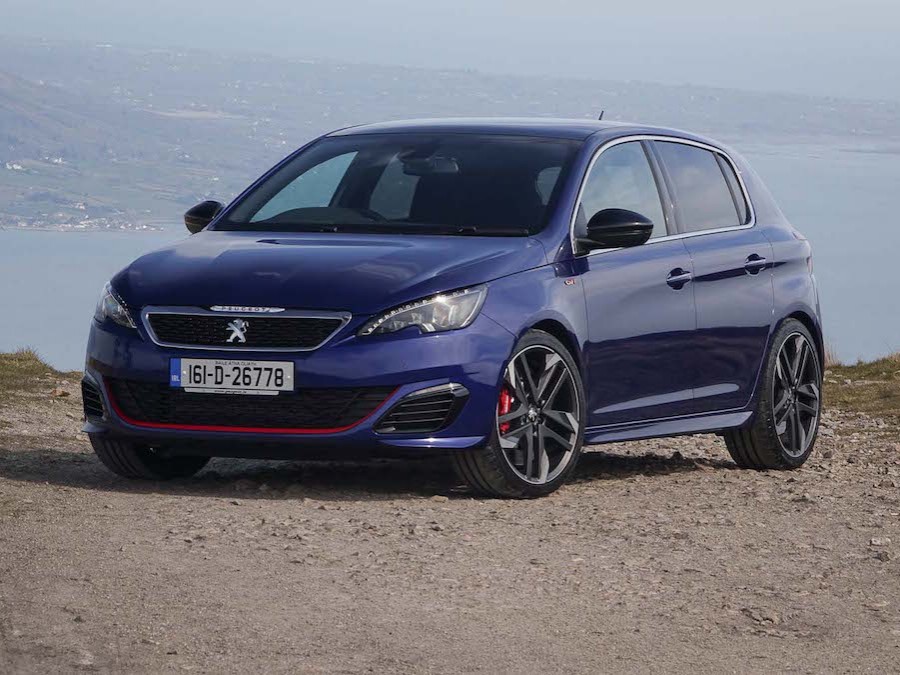 Peugeot 308 GTi review
Peugeot 308 GTI 270 vs. Volkswagen Golf GTI: Peugeot Sport-tweaked chassis is sweet, but it's not as sharp to drive as the GTI. 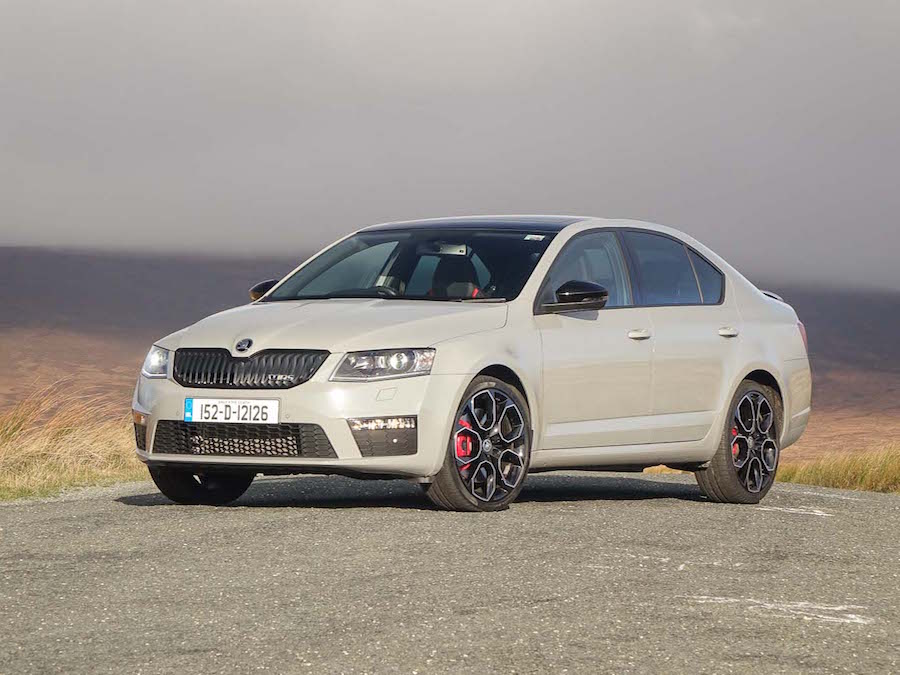