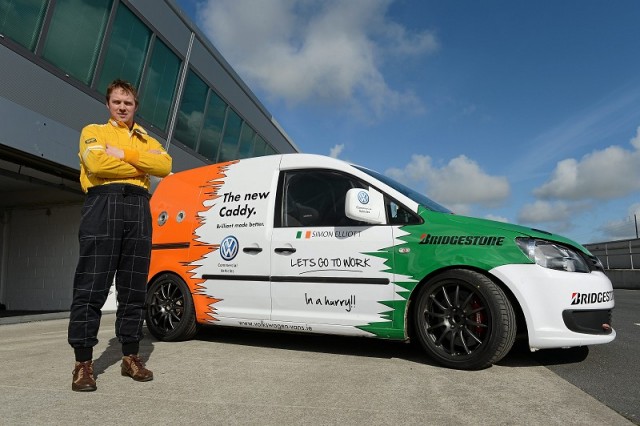 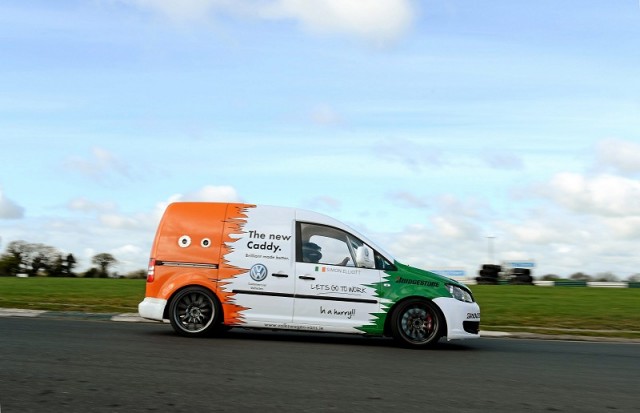 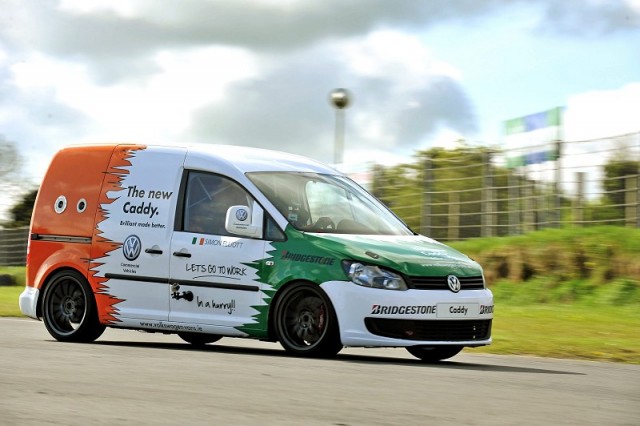 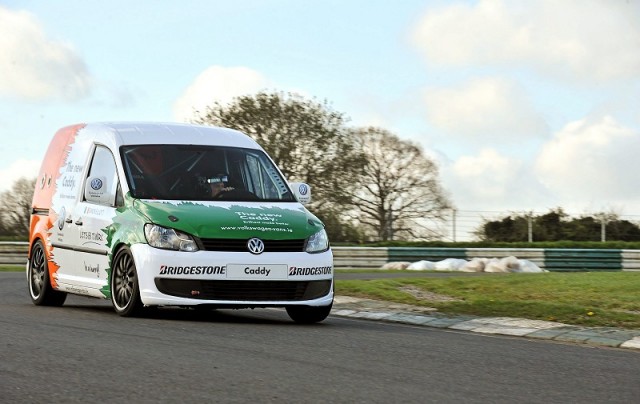 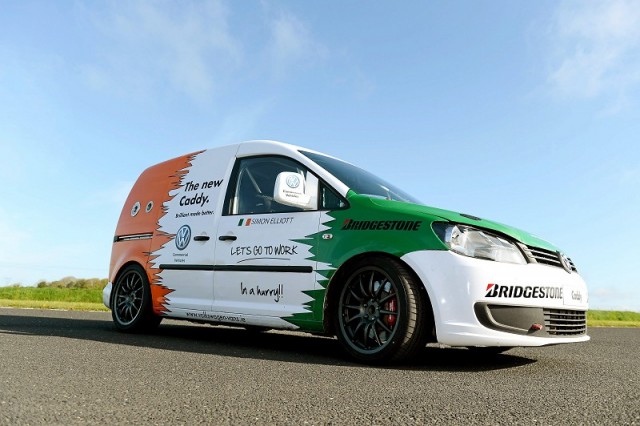 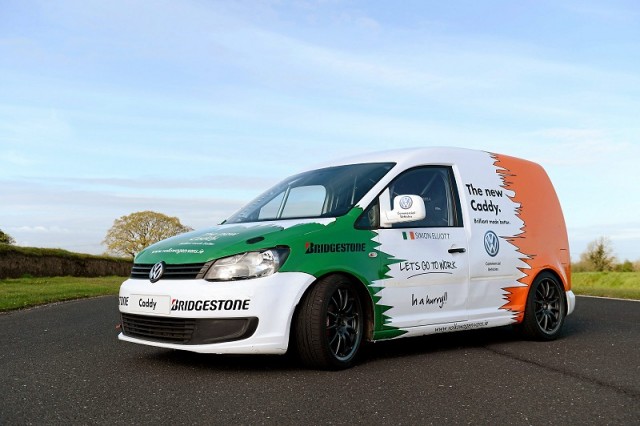 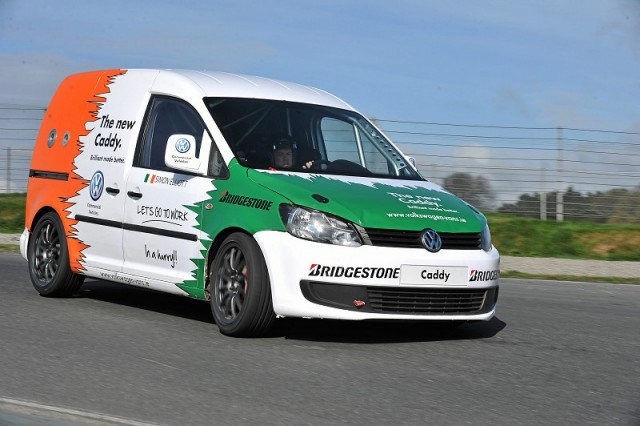 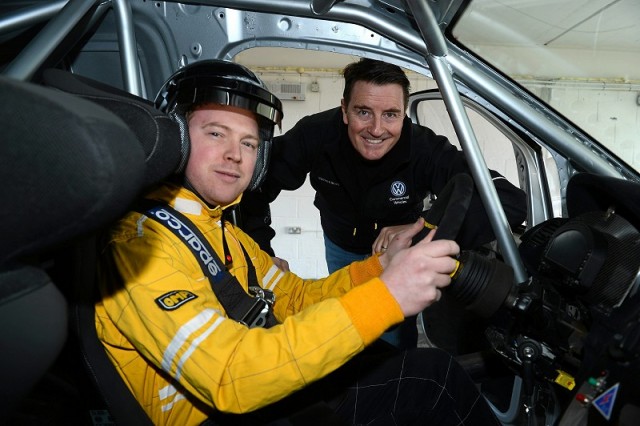 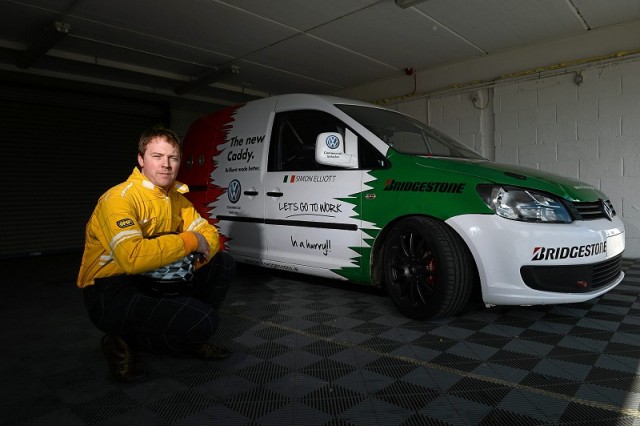 Many companies have flirted with the motorsport rules in a bid for publicity, but few have done it as successfully as Volkswagen Commercial Vehicles with its bonkers Caddy Racer. We get behind the wheel of the pride and joy of Simon Elliot (now the Managing Director of Volkswagen Group Ireland) for a few hot laps of Mondello race circuit.

Few track cars grab attention quite like the Caddy Racer. At a standstill in the pit lane it looks like the real deal, thanks in no small part to the large alloy wheels and the racing brakes that nestle behind. Shorn of its RAC livery from racing in the UK, Volkswagen Ireland applied a tri-colour wrap, though it doesn't hide several battle scars from its previous life in competition. This adds to the authenticity.

Though riding on Bridgestone road tyres now, the adjustable suspension still carries noticeable negative camber, enhancing the stance no end. Topping it off is a pair of needlessly huge rear-exit exhaust pipes. Otherwise the bodywork is unchanged from the regular Caddy's.

That is until you look inside. This Caddy doesn't have much space left for parcels, or anything else for that matter thanks to the substantial custom-made roll cage. However, due to the high doors and large doorways it's easier to clamber in through the cage than in most car-based racers. Strapping into the racing seat, it all begins to feel a little serious. The interior is pared back to the minimum, with a small instrument stack in front of a thin, well-used steering wheel, solid-feeling pedals and an exposed gear linkage.

The Caddy Racer mixes bits of the Golf GTI with bespoke racing components to good effect. You turn the ignition on by pressing a small green button, wait for it all to be ready, then turn a regular ignition key to fire up the engine. It barks into life and settles into a high idle. It's loud. Hardly surprising when all the sound insulation has been stripped out and there's no form of silencer on the custom Milltek exhaust. The 2.0-litre TFSI engine has been remapped by Superchips to give 270hp at 3,600rpm and a hefty 512Nm of torque from 3,300rpm. It also responds keenly to the mildest blip of the throttle.

Somewhat surprisingly, the Caddy Racer features a six-speed manual gearbox. In the pit lane it's quite tricky to slot first gear instead of reverse, but taking off is a cinch so you can ease the clutch out to ensure you're going the right direction. Once on the move it's clear that the car wants to push on - it really doesn't like hanging about. Not one to disappoint it, we accelerate hard towards the first turn at Mondello.

It's impossible not to smile. No road-going Caddy ever felt this quick. Although powerful, the Racer still weighs 1,300kg, so its pace is fast without being intimidating. And it sounds fantastic. The gearbox comes alive once on the move and it's easy to slot gears quickly. Saying that, there's so much torque low down the rev range that a track like Mondello requires only a couple of gears. Not that that stops me changing down and heel and toeing for the sake of it. The rev limiter is somewhere around 6,000rpm, but it's natural to change up earlier to make use of that torque instead.

The brakes are quickly up to temperature and they prove faultless, with plenty of feel. Remember, this has no anti-lock braking system - or traction control for that matter. Instead, a limited slip differential helps keep forward momentum on exit of the tighter corners by apportioning torque to the wheel with most grip.

And grip it does - even without the slick racing tyres its suspension was developed for. It takes a lap or two to get used to the sensation of driving a high-sided vehicle, though the low-set driving position helps with that. So too does the excellent visibility out of the large windscreen. Though sitting low down you can easily see the apexes as you approach them. Once up to speed what impresses most is the van's stability. It shrugs off mid-corner bumps without too much drama and the rear end is planted to the track at all times. Despite the competence of the racer it's still huge fun to wring its neck.

Simon reckons the Caddy Racer cost the bones of €40,000 to build, which is not all that much for a serious racing machine at this level. It helps that he bought the shell from a contact at Volkswagen Commercial Vehicles headquarters in Hannover in Germany for a 'knockdown price' and the engine was sourced via eBay.

Volkswagen Group Ireland now owns the Caddy Racer, so you can be sure this isn't the last we'll see of it. In its current form it doesn't quite fit in with any of the racing formulae that frequent Mondello, but it wouldn't take much to convert it for the Irish Touring Cars series - or perhaps something else. All it needs now is a suitably nationwide sponsor that wants to attract a lot of attention. Few racers have quite as much advertising space on them as it either!

The existence of a racing version of the Volkswagen Caddy is thanks to marketing reasons, but it turns out to be a serious race car that's an absolute hoot to drive. We hope it gets to take to the track in anger again soon. I'll be queuing up to get my name on the door...