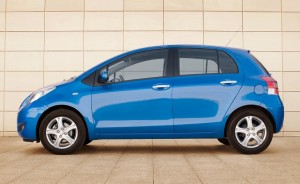 The Yaris might have been around for a long time but it remains a large seller in the Irish market and it is generally in and around the top ten. With Irish buyers having an almost religious devotion to the Toyota brand, the recent recall as part of a throttle issue is likely to be just a small blip in the otherwise unblemished reliability record of the Japanese brand. The Yaris with a choice of three- and five-door body styles, but most people will choose the later.

The Yaris has been refreshed of late and this has kept it competitive. Like the Avensis, it was designed in Europe and this has made these cars more modern and more relevant to Irish buyers than previous offerings. It has a quite cartoon-like cuteness to its design at the front-end and as such this is likely to appeal to a more female audience first and foremost and this perhaps limits its appeal somewhat.

In five-door format, which makes up the majority of sales, it is quite spacious, with a high roof and decent legroom in front and rear. The three-door model sells in smaller numbers, as access to the rear is quite restricted. Inside, the Yaris has quite a funky interior, which is at odds with the rest of the range - iQ aside perhaps. The centrally mounted digital instruments can be a pain to read at a glance though, while the heater controls are set very low on the centre console. The high-set driving position won't suit everyone either. The steering wheel adjusts for height but not reach. All models have a system that allows you to fold the rear seats flat at the tug of a lever. The back seats also slide to provide excellent legroom in their rearmost position, but this means sacrificing a lot of the well-sized boot's space.

There are three regular grades - Terra, Luna and Sol - and then there is a T-Sport top-of-the-range version available. Terra and Luna models get steel wheels, and you get a plastic steering wheel on the Terra model. Air conditioning comes standard on Luna models, with automatic air conditioning featuring on the Sol. In terms of safety, all variants get driver and passenger front and side airbags, with the Luna and Sol versions gaining curtain and knee airbags.

You can choose from one of four engines in the Yaris: a 69bhp 1.0-litre petrol also found in Toyota's baby Aygo; a 100bhp 1.3-litre petrol and a 90bhp 1.4-litre diesel, offering a quoted 4.1l/100km. At the top of the range there is also a 1.8-litre T-Sport model with 133bhp. The Yaris is fine around town, but can feel a little unsettled out on the open road. The handling is predictable and safe, but the Yaris isn't as assured or as grippy as the better superminis in this class, such as the Fiesta, and it's certainly not sporty by any stretch of the imagination, but then this is not a car that tends to be bought for anything like that reason. The Yaris is pretty refined; however you should really choose the 1.3-litre petrol or 1.4-litre diesel to avoid the quite vocal three-cylinder 1.0-litre petrol model.

Despite its small size, the Yaris is high on safety and received a five-star safety score in the Euro NCAP safety tests.

This is not the most exciting car in the segment, but sells well because Irish buyers like the name and the reliability. Even Toyota's recent issues with recalls are unlikely to change that. Pricing is good and Toyota dealers have very competitive offers.