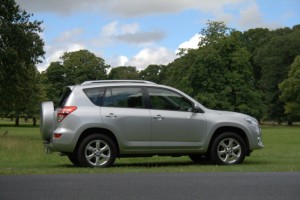 Highlight of the update to the versatile RAV4 is its new 2.2-litre D4-D engine.

Some would say that Toyota invented the compact SUV category with its original RAV4, but the game has moved on significantly now. Crossovers are stealing sales from this sector, though it's still buoyant. Toyota gave the RAV4 a mid-life refresh recently to ensure it remains competitive. Worth raving about?

Despite a nip and tuck that resulted in sharper frontal styling, it's patently obvious that the RAV4 is still just that - though it now looks more like VW's Tiguan than before. I personally don't like the rear end, partly because it's dominated by the external spare wheel. The more expensive Sol specification replaces the wheel with a tyre repair kit.

We've awarded the RAV4 a high score in this category mainly because of its highly versatile interior. The rear (split-folding) seats tilt and slide and also fold down to create a completely flat load area. This is all very easy to do thanks to levers in the boot, which itself is massive and has additional storage under the floor. Perhaps because there's no spare wheel in there...

There's plenty of leg- and headroom too - front and back - though other than the huge sectioned centre console storage box the cubby holes are on the small side.

The 2.2-litre 'D-4D' turbodiesel engine fitted to our test car perfectly suits the RAV4. It offers 150hp and 340Nm of torque, which enables the car to rapidly cover distances with little fuss. It's the torque figure that matters in cars such as these and it'll no doubt be a boon for towing too. As a bonus, engine noise is well suppressed - this is a thoroughly modern unit.

Nothing about the six-speed manual gearbox stood out, but its ratios are sensible and the lever is placed close to hand. The change itself is unobtrusive.

Toyota has engineered the RAV4 for comfort rather than outright road handling, but it still makes a good account of itself on a twisty route. It is competent rather than engaging though, so it covers ground in a quick, fuss-free manner regardless of the driver's skill level. The traction control is superfluous in the dry, especially in this four-wheel drive model. It takes real provocation and a heavy right foot for the engine's torque to be redistributed to the rear wheels.

In town the RAV4 is quiet and comfortable, even over poor surfaces and speed bumps, though hit those a little too hard and the suspension knocks a bit.

In our time with the RAV4 we averaged 8.5 litres/100km (33.2mpg). That's not all that impressive, but in fairness we did very little cruising, instead spending most of the week in an urban setting, with a few longer cross-country treks.

Prices for the RAV4 line-up start at €28,695 for the front-wheel drive 2.2 D4-D Luna model. Our Luna-spec 2.2 D4-D version, with four-wheel drive, retails at €30,800, which is a reasonable price for the class. Its 154g/km CO2 emissions put it into Band C for tax and there's no benefit in terms of reduced tax to opt for the two-wheel drive variant.

A 2.0-litre petrol model is also available in two- or four-wheel drive guises, with six-speed manual or 'MultiDrive' automatic options. Diesel buyers can also opt for an automatic gearbox, though that pushes the tax up into Band E.

Toyota's RAV4 may not grab the headlines, but it continues to offer compact SUV buyers a decent ownership proposition. It's well made, and the new 2.2-litre turbodiesel engine is a great partner to the car. It straddles the gap between road-biased crossovers and proper off-road machines, yet compares well to both.