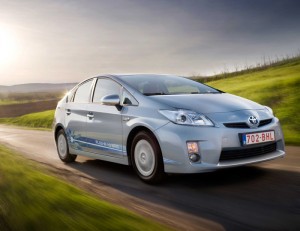 We have assembled in Strasbourg for a demonstration of Toyota's new Plug-In Hybrid Prius. The new model is some time away; in fact it won't go on sale in Ireland until 2012, but Toyota Ireland's spokesperson has told us that they will get three examples to trial in June, for a three-year period.

So, what is all the fuss about then? Is it a case of Toyota, who has invested so heavily into Hybrid only now showing that they intend to make an EV vehicle? With Nissan set to have the fully electric LEAF on sale here in Ireland next year, why should we get excited about a Prius that is still only partially electric powered?

Well, as we know, the electric car is only going to suit a certain type of buyer. The limitations of its range mean that you are restricted to 160km or less and that is under ideal conditions. Some of the electric cars we have driven thus far are unlikely to manage that if you drive them on a dual carriageway, or even scarier, on a motorway. So, Toyota reckons that the ideal interim technology is a plug-in hybrid. Instead of the nickel hydride battery that features in the standard Prius, this version comes with a lithium ion battery and this time you can plug in thisPriusinto a standard socket and charge up the battery in one and a half hours. And while the current standardPriuscan drive the car on EV mode, just on battery power with no emissions for a tiny distance at low speed, the plug-in version is capable of much more impressive performance. The plug-in Prius can be driven on EV mode for 20km up to a maximum speed of 100km/h.

The plug-in version still employs the same 1.8-litre petrol engine, but when used with this lithium ion battery is capable of returning 30 per cent greater fuel economy, 2.6l/100k, and puffs out just 59g/km of CO2.

On a simple test route around the city streets of Strasbourg we have stayed in EV mode through the entire route, which included a dual carriageway. The car remained eerily silent yet reasonably potent. It is like driving the regularPriusapart from where the standard model wakes up the petrol engine almost immediately, in EV mode this doesn't happen unless you were to exceed 100km/h or perhaps seek to overtake aggressively.

There is little or no visual difference between the plug-in model and the standardPriusaside from somewhere over the front left wheel to plug in the charging socket and the energy monitor inside the car incorporates an EV driving range display, showing how far thePriuscan travel under electric power alone with the remaining battery charge. Also, an EV Driving Ratio indicator shows how much of the total distance driven so far has been under electric power alone.

In EV mode there is are no CO2 and NO2 emissions. Plus, if it runs out of charge- big deal! You can just use it as a normal hybrid, where it will regenerate 20 per cent of this battery again through normal driving and regenerative braking and once you get to your office or home or on-street charging point then you can charge it again.

This is a car that sill very likely address the issue that the first EV buyers will face, about whether or not they can take on a longer journey. In theory, if you commute a very short distance, you could put almost no fuel in this car at all, but if you do need to drive to Cork in one go, then that isn't a problem. There will be no stopping at the side of the road for extended coffee breaks or battery swapping.

This car does not arrive in Ireland until 2012, when by then the VRT rebate on the standard Prius will no longer apply meaning it may be more expensive than it is now. However the plug-in version will get a €2,500 grant applied to it under the government's scheme to aid buyers of electric cars from January 1st2011-December 31st2012. Toyota weren't giving too much away at the press conference about how much it will cost but they did say that the pricing will be very competitive and very close to the standard model, so we could see it costing around €27,000 by the time it comes to Ireland, sometime in 2012.