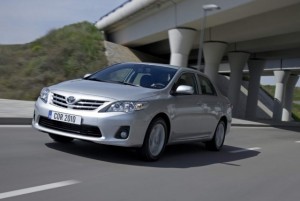 The Corolla isn't sold in many European markets (including the UK) outside Ireland, but such is the importance of Toyota saloons to the Irish market that the company sells five times as many Corolla saloons as it does Auris hatchback models. What you get in the Corolla is a substantial car that doesn't cost a lot of money - and that is why it has sold really strongly here. Admittedly, it isn't the most exciting car, but then that hasn't been what Toyota has been about for some time. Prices are between €19,445 and €24,170 and the car comes with a choice of 1.4-litre petrol or 1.4-litre D-4D diesel engines.

There isn't anything particularly exciting about how the Corolla looks, but it is reasonably handsome and what can be said in its favour is that it looks much more substantial than some of its saloon rivals. It looks like it could be more closely related to the Avensis than to the Auris. There is a massive 450-litre boot at the rear, so it's practical too.

Inside, the cabin is what you might expect from a mid-price Toyota. There is a lot of grey plastic present and it is a little drab, but it certainly is functional and quite spacious for the price.

The engine choice, as mentioned above, is between the 1.4-litre VVTi petrol and the 1.4-litre D-4D diesel. The petrol model has 97bhp and 130Nm of torque, while the diesel has 90bhp and 190Nm of torque. There are three specification levels: Terra, Aura and Luna. The basic Terra model has steel wheels with hubcaps; air conditioning comes as standard on Luna models; all models get driver, passenger, knee and curtain airbags; while the Luna gets chrome inserts on the front grille.

Few people will buy the Corolla because they find it particularly interesting to drive, but they will buy it because it is comfortable and there is nothing odd or unusual about. This is as close to the equivalent of white goods in motoring terms as you could ask for and that isn't a criticism; it just works fine as a car, without any fuss at all.

The steering lacks any real feel but it is easy to park and there is enough understeer built in that you would never feel the need to push the car too hard.

This is not a sexy car, but that doesn't really matter to the scores of people who buy them here in Ireland and are more than happy to own one. This is a car that will suit anyone who wants a reliable car - if you put Toyota's recent issues aside. If you are to buy one, we'd buy the diesel, and would need to choose the Luna version to get air conditioning at least.