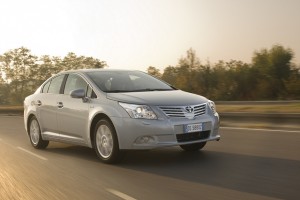 The Avensis has been a top-seller in Ireland for a couple of generations and while previously it wasn't the most inspiring car, the latest model has gone some way to becoming a car that has a more European design, showing more flair than before. The latest model (introduced in 2009) has already gone to the top of the sales charts, with cleaner petrol and diesel engines and increased levels of safety. Prices range from €24,165 to €42,365 with engines ranging from 1.6-litre petrol to 2.2-litre diesel. The model is available in saloon and estate body styles.

The previous generations of the Avensis were pretty bland, but they were coveted because they were incredibly reliable, with bulletproof build and engines. Obviously the recall issues of 2010 are likely to have dented this reputation somewhat, but it will become increasingly important for Toyota to get better in areas such as design. The current Avensis is a much better looking car than the previous models; thanks no doubt to the fact that it was designed at Toyota's European design headquarters, ED2. There is a stronger character to the new front and rear than before and although the current generation shares the same length wheelbase than the model it replaced, the car is 50mm longer than before and looks and feels quite substantial. It might not be as striking as Opel's Insignia, but this is a much better looking car than before.

The Avensis comes with a choice of three petrol engines: 132bhp 1.6-litre, 147bhp 1.8-litre and 152bhp 2.0-litre.The more popular choices are now the diesel engines, which are a 2.0-litre unit with 125bhp and the 2.2-litre diesel with 150bhp. Specification levels are Aura, Strata, Terra, Luna and for the 2.0-litre petrol model only, there is a Sol specification. The Terra model features 16-inch steel wheels, with 16-inch alloy wheels on the Strata and Luna models.

Manual air conditioning features on Terra and Aura models with dual-zone climate control standard on the Strata grade. The Strata specification also gets a leather steering wheel while all versions get an auxiliary port for MP3 players and an electric parking brake. In terms of safety you get VSC+ stability control and traction control as well as dual front airbags, side airbags, a driver's knee airbag and curtain airbags front and rear. The 1.6-litre petrol models are the cheapest to buy, but the 2.0-litre diesel engine has lower emissions (136g/km) so will fall into motor tax band B.

The Avensis was never set up to be the most dynamic or overtly sporty car in its class and that isn't what this car is about, but in its latest form it is a more engaging car to drive than before. The cabin is infinitely better now than before too, looking way less drab and the seats and seating position are very comfortable. And comfort is another feature of the ride quality that makes it a favourite for those that spend a long time in the car. This is an ideal motor for someone who commutes long distances and, twinned with the quiet and refined diesel engine, makes for relaxed driving. When you push on in the Avensis you don't really feel that involved in what is going on and while the steering is accurate there isn't that much feel.

The engines in the new Avensis are particularly impressive, with very low emissions. The emissions are 10- to 26 percent lower compared to the equivalent engines in the old model. Most of the sales are of the saloon model, but the estate is also pretty useful. As well as a six-speed manual gearbox, there is a six-speed automatic gearbox available too.

The Avensis is never likely to be the most glamorous car in the class, or the most sexy, but it remains a favourite because it has a strong reputation, good engines and it's very comfortable. Toyota's reputation has taken a dent from recalls, but this has been a blip in an otherwise excellent reputation for building cars well. The Avensis is likely to give its owner little need for worry and residuals are usually strong too.