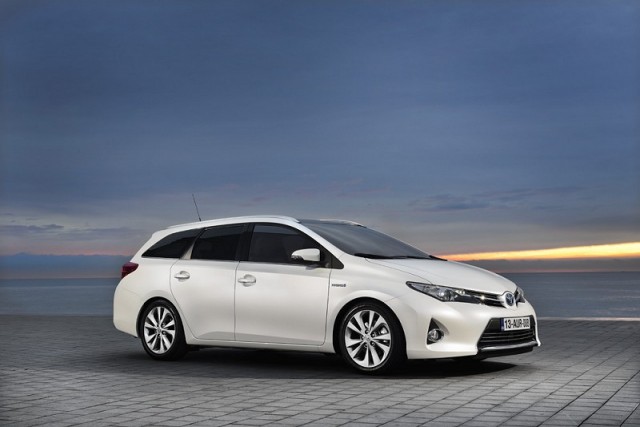 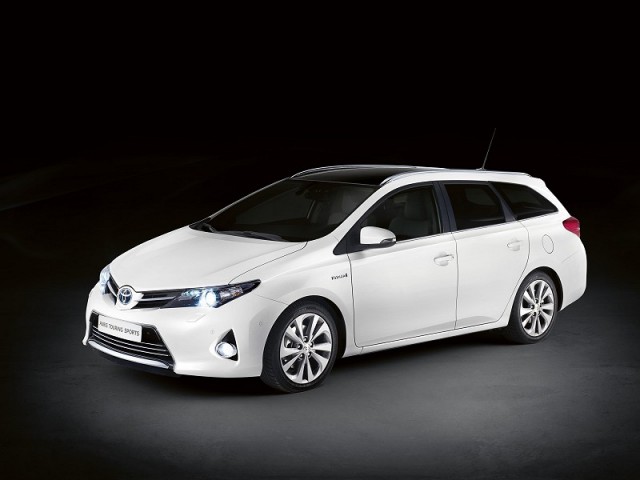 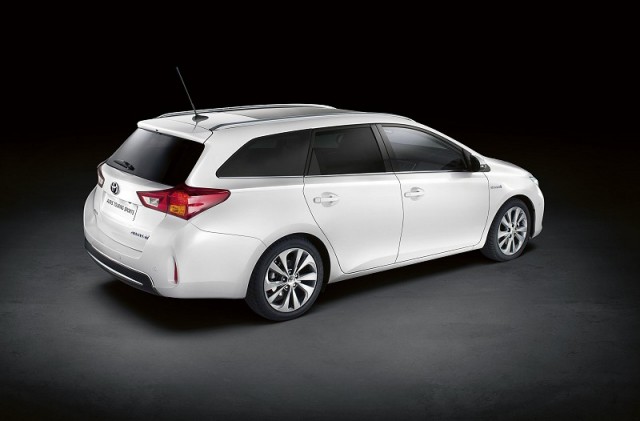 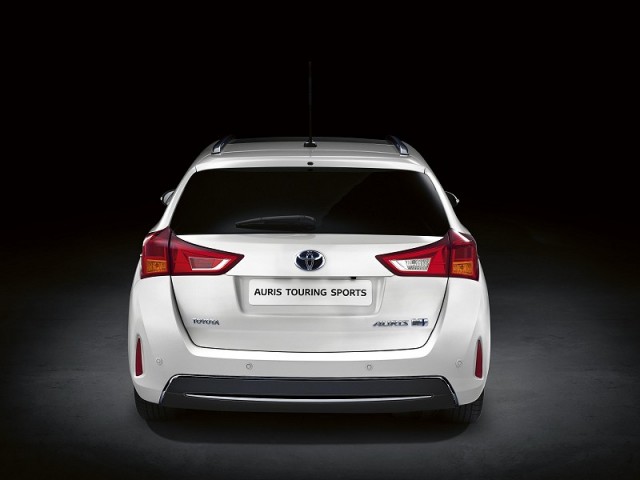 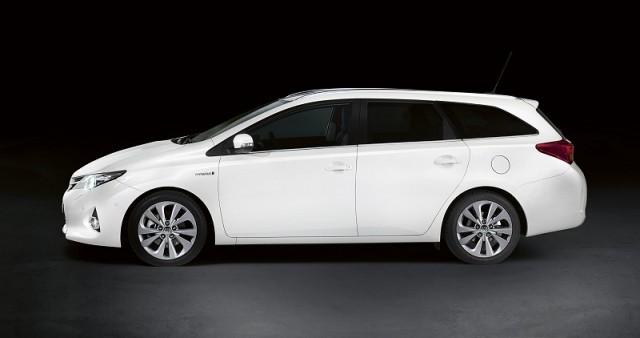 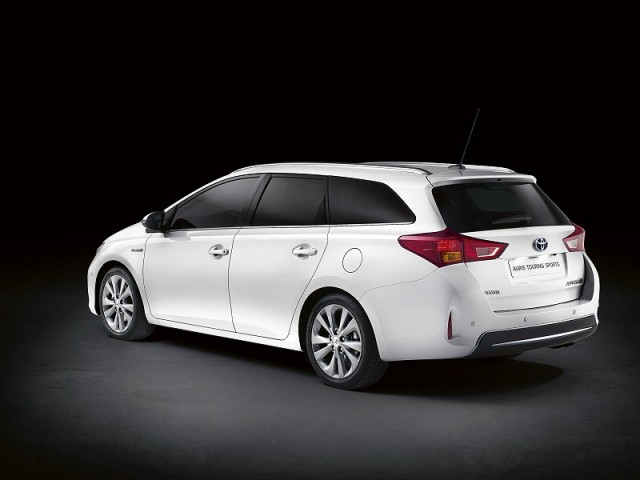 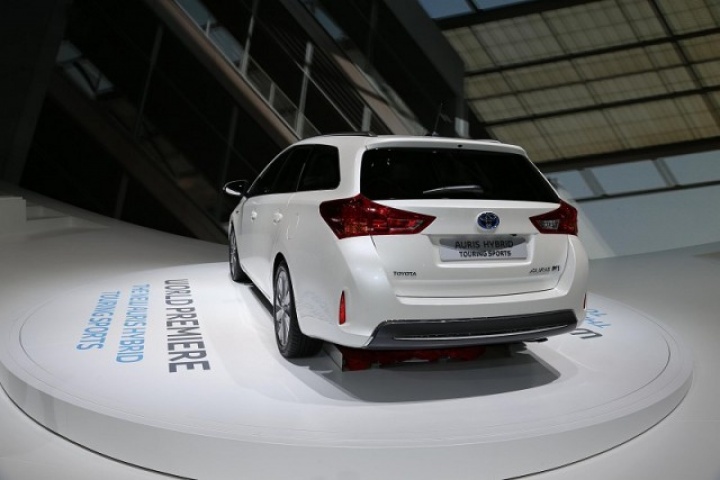 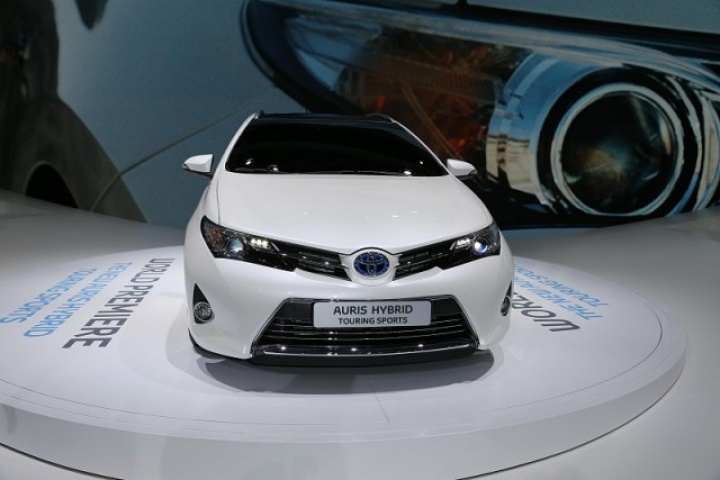 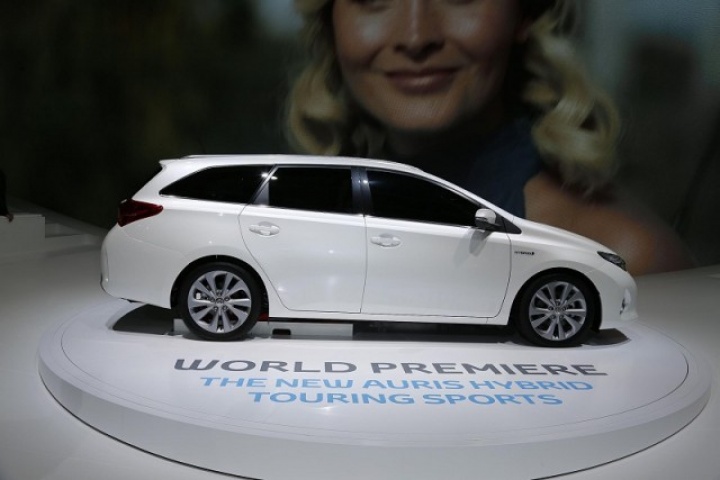 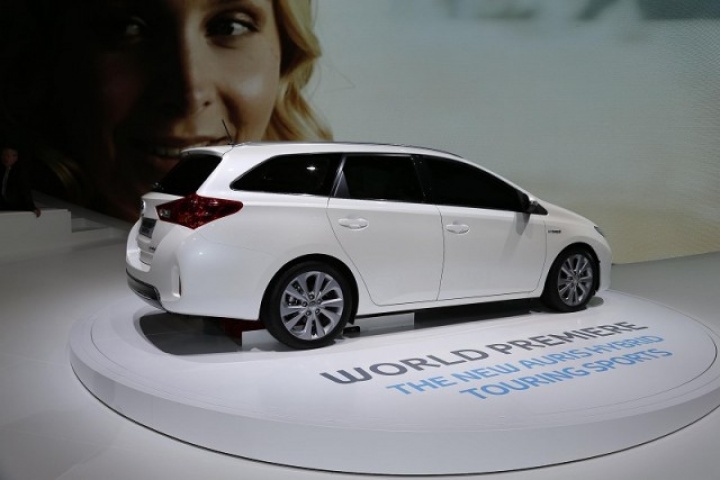 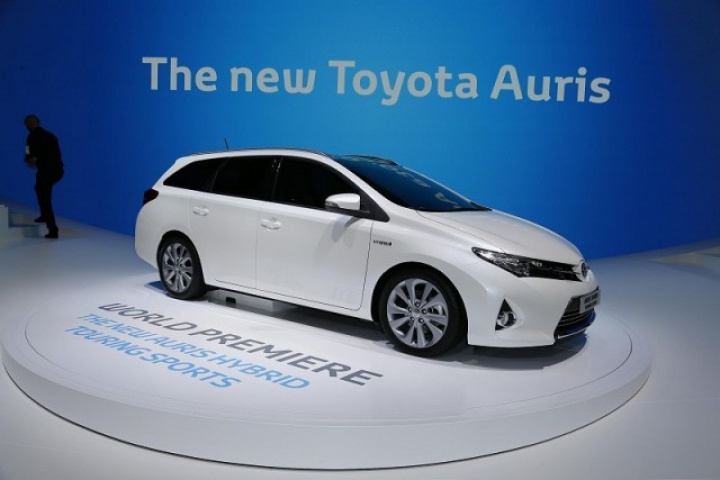 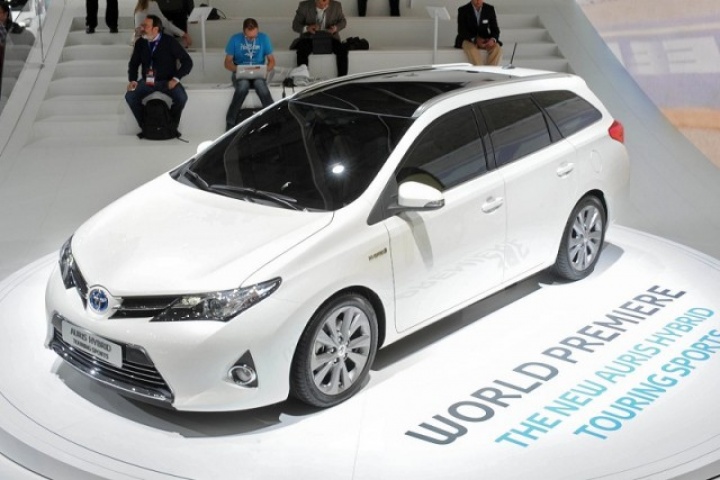 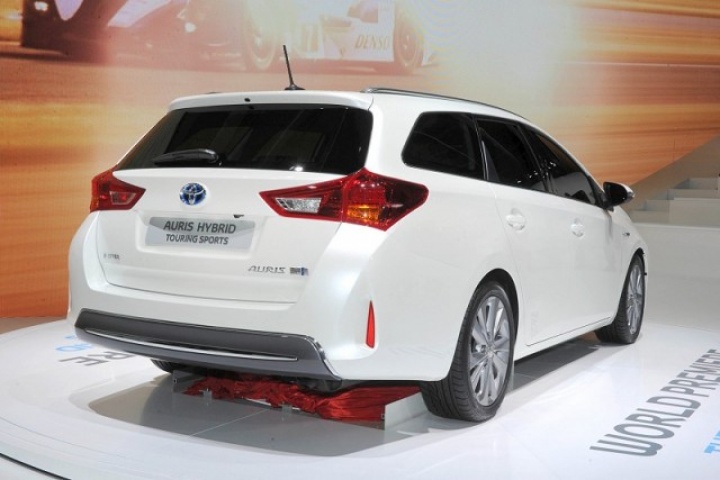 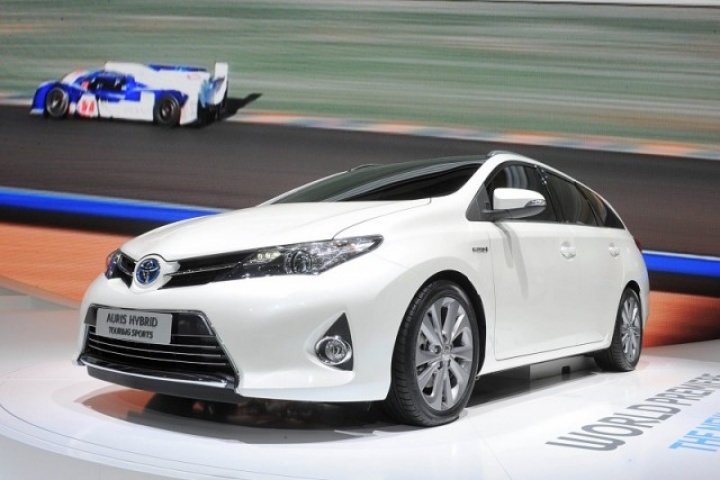 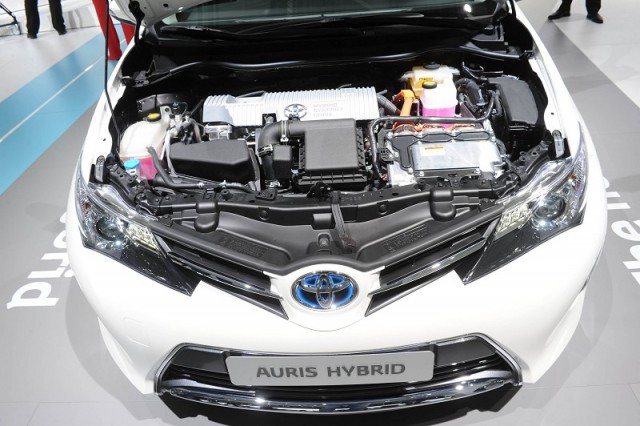 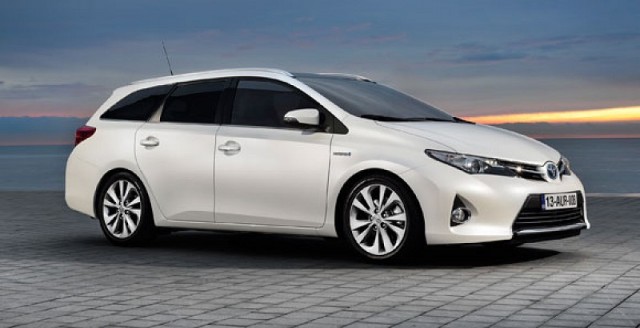 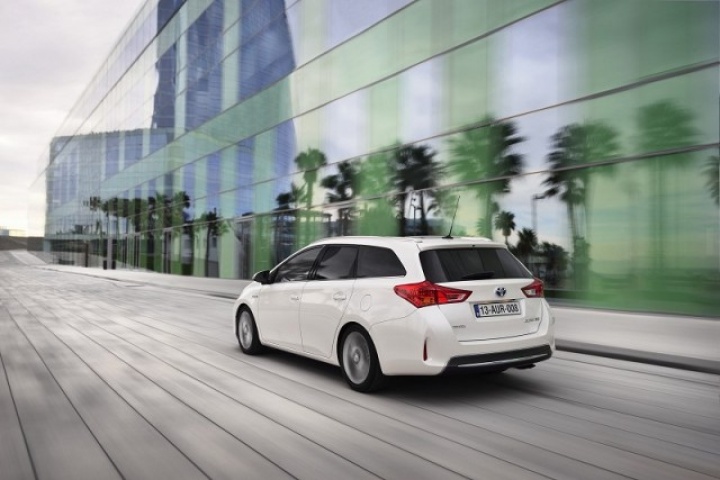 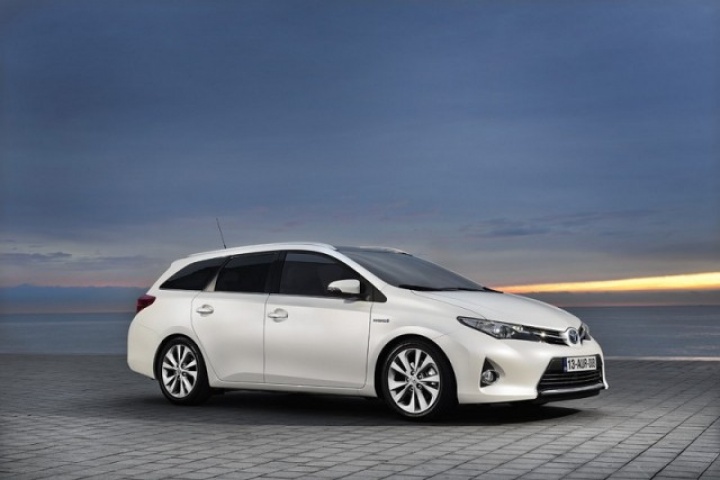 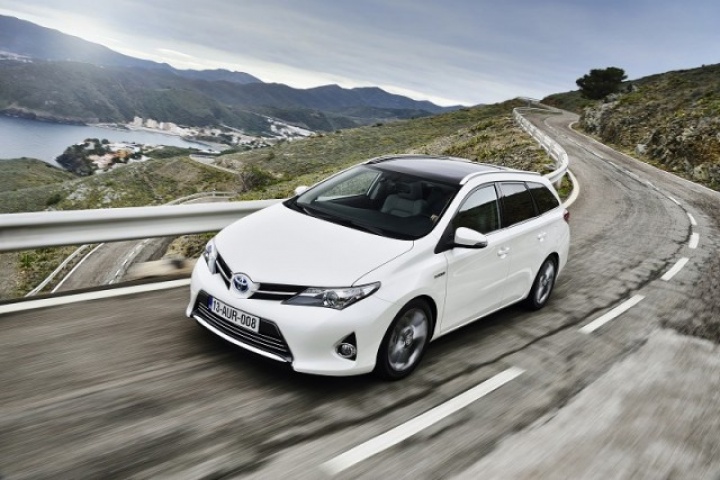 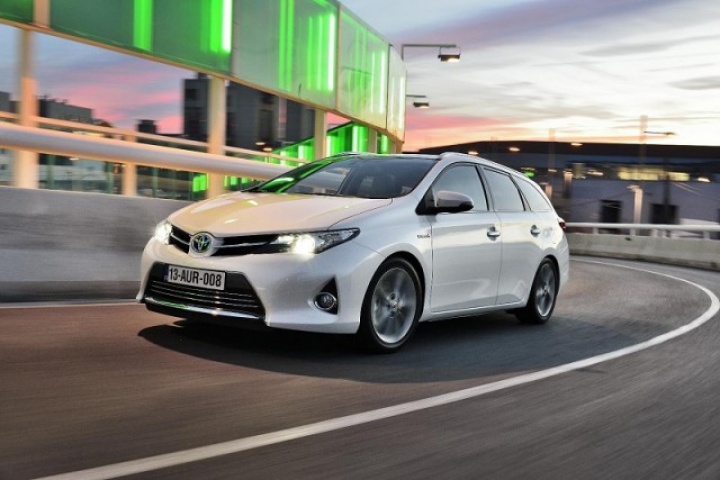 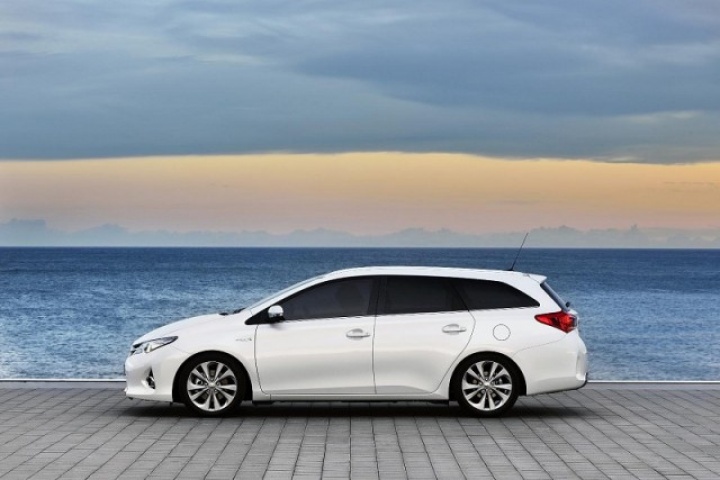 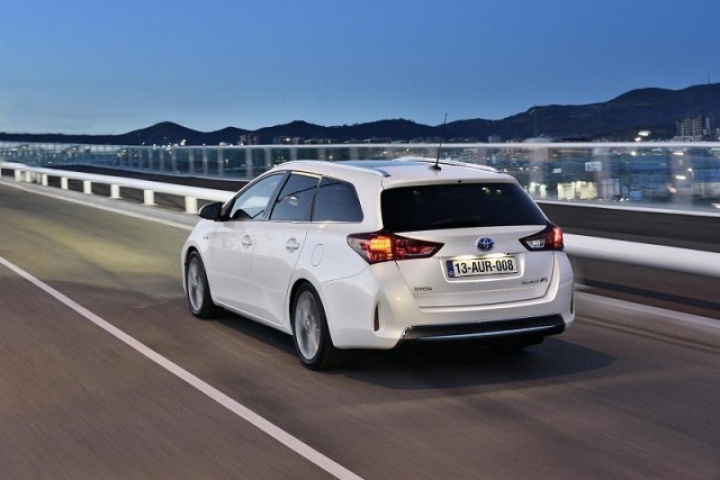 Refined, capacious, generously specified and frugal: the Toyota Auris Touring Sports has a lot going for it. A shame then that the unique-for-the-class hybrid model is hampered by a transmission that is ill-suited to the engine. Not that the hybrid will be the top seller; that honour will likely go to the diesel model that we are yet to drive.

Toyota's new Auris Touring Sports (let's call it the TS for short) features the same opinion-dividing styling of its hatchback sibling with a narrow grille up front flanked by headlights featuring LED daytime running lights. The steeply raked windscreen is also retained and leads into a roofline that is now 285mm longer than that of the hatch's. Both cars feature the same 2,600mm wheelbase meaning all of the extra space has been dedicated solely to the boot. This space is accessed via a completely redesigned rear end with a new bumper and tailgate design resulting in a sill height 100mm lower than the hatch's. The Hybrid model displays a number of individual details that set it apart from the rest of the range. These include graphite finish to both the lower grille and rear diffuser and a hybrid blue for the Toyota emblem. Hybrid logos also feature on the front wings. Thanks to some clever packaging the hybrid model shares the same 530-litre load space as the petrol and diesel powered cars. This can be boosted to 1,658 litres with the simple pull of a boot-mounted handle - no more having to collapse the seats from within the cabin itself.

Forget the Sports bit in the TS's name; there is nothing sporty about this load lugger, but that is not necessarily a bad thing. The car rides well with the soft suspension soaking up most of the bumps we could find on our predominantly smooth test route in Mallorca. There is a hint of understeer when pushed but with the steering offering little in the way of feedback you are not encouraged to push too hard to begin with. Bar some wind noise from around the door mirrors the TS is also particularly refined making it the ideal car to cover large distances in comfort. Until you prod the accelerator that is.

Under normal driving conditions the 1.8-litre petrol engine is remarkably hushed and only marginally nosier than when running on electric-power alone; however, ask for a little bit more oomph and the fly in an otherwise pleasant ointment begins to poke its head out in the shape of the CVT (continuously variable transmission) style gearbox. When accelerating hard (like joining a fast-moving motorway) the transmission allows the engine to rev too long and too high, leaving you with a loud din not too dissimilar to the noise a food blender makes. And despite packing both a petrol engine and an electric motor the TS does not offer much in the way of torque so you are likely to encounter this issue often. A 'step' in the transmission that mimics the gear changes of a regular auto box could alleviate this but Toyota has not seen fit to include one and speaking with the Auris' deputy chief engineer, Satoshi Tanaka, it is not high on the list of priorities for the company.

Both the Hybrid and the 1.6-litre petrol models feature double wishbone rear suspension with the 1.33 petrol and 1.4 diesel having to make do with a less sophisticated (and cheaper to make) torsion beam set up. As these are likely to be the most popular options in Ireland it will be interesting to see if they can match the more expensive cars for refinement.

Irish prices and specifications are yet to be announced, but it is likely that they will mirror those of the Auris hatchback currently on sale. This will mean three trim levels for the conventionally powered car (Terra, Aura and Luna) with two separate levels for the hybrid.

Both the 1.33 Dual VVT-i and 1.4-litre D-4D engine will likely be available in all trims with the 1.6-litre petrol only offered in top spec Luna.

The official word from Toyota Ireland regarding pricing is that the TS will be 'competitive'. We reckon that means an entry-level price of €20,995. The Auris Touring Sports goes on sale in Ireland on July 31st.

At 1,658 litres the load space of the Auris TS is, according to Toyota, class leading... until next week anyway. The Volkswagen Golf Estate (not to be marketed in Ireland) will offer 10 more litres than the Toyota with the elephant in the room being the Skoda Octavia Combi, which many manufacturers (conveniently) tend to class as a larger car, despite its similar pricing.

As a package the Toyota Auris Touring Sports has a lot to offer with a refined drive, plenty of space and (we suspect) a reasonable amount of specification for the price. While the unique-in-class hybrid version offers emissions as low as 85g/km and respectable fuel economy it is hampered by the transmission. We'd stick with diesel power for now.