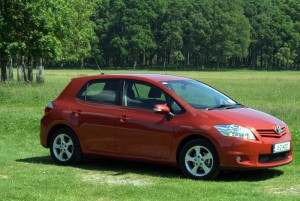 Though you may not notice it at first, the updated Toyota Auris is significantly improved.

Toyota revised the look of the Auris earlier this year and though the changes are subtle they make the car look more interesting than before. That's especially true of the sharper face and on the Luna version the five-spoke 16-inch alloys lend it a much-needed dose of sportiness. I'm not convinced about the design of the new rear bumper, but that's personal taste.

The updates inside are probably more important and successful, as they lend the cabin a much nicer overall feel. The steering wheel (vaguely flat-bottomed), gear lever, handbrake, doors and dashboard are all seemingly more tactile than before and the 'luxury seat trim' fitted to the Luna model is of high quality too. The unusual high centre console remains.

While the rear doors don't open very wide, there is loads of room in the back seats, helped by a noticeably flat floor. The cost of all this room for passengers seems to be boot space and the rear seats don't fold completely flat either.

Elsewhere in the cabin there are loads of storage areas, including a decently-sized covered locker between the seats and a double glovebox, one portion of which contains USB and aux-in ports for mp3 player connectivity.

Our test car was fitted with the new 1.33-litre petrol engine and it's really quiet when idling. Actually, it can be completely silent, as it has stop-start fitted as standard. I noticed that one function of the on-board computer recorded how long the engine is shut down by the stop-start system. It'll be interesting to see how much running time we save over the course of a week.

Driving the Auris is a pretty functional affair. It's not unpleasant, but it's hardly the kind of car you'd take out for a drive for the sake of driving. The chassis balances comfort and corner handling well in general. Bumps are efficiently dealt with and it's quite stable. However, the steering is quite slow and lacks any form of communication. On the plus side, the pedals are well spaced and weighted and the six-speed gearbox is a joy to use.

Unlike many of its competitors, Toyota has not yet gone down the route of turbocharging low capacity engines for its petrol models. So don't expect the 1.33-litre Auris to stand up to comparison in the performance stakes to say a 1.2-litre TSI Volkswagen Golf. Saying that, the Auris doesn't feel slow and is happy enough on the motorway or in town.

Toyota claims that the 1.33-litre petrol engine is 17 percent more fuel efficient than the old 1.4-litre option. That's probably down to the stop-start system first and foremost, though the 'VVT-i' tag means this engine features advanced variable valve timing technology, which helps the engine be both efficient and perform well for its size. We have not managed to get anywhere near the combined cycle figure of 5.9 litres/100km though; the average is showing at nearly 9.0 litres/100km. In fairness, most of the driving has been done in an urban setting, with very little cruising.

Given that everyone is buying diesel at the moment you have to wonder where this petrol model fits in. Toyota's 1.4-litre D-4D engine costs only €400 more, though it's in the same Band B for road tax. Still, its better fuel economy will soon pay back the premium and it has much more torque, which is useful if you regularly fill the car with people or tow a trailer. The downside of the diesel is that it's noisier than the petrol option.

So, seven days at the wheel mostly spent in Dublin's suburbs resulted in a total of 10 minutes using the stop-start system. Not massive, but that should really add up over the life of the car if it's used in town a lot.

I won't miss the Auris, though it has appeal as fuss-free family transport. For about the same price of this test car you could have either 1.2 TSI or 1.6 TDI versions of the VW Golf or a Ford Focus 1.6 TDCi, both of which are sensible, solid buys, or something a little more distinctive like the new-look Mazda3 or Alfa Romeo Giulietta.