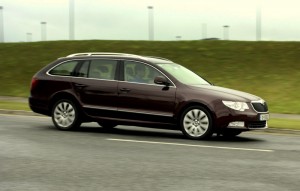 We've long been fans of the Skoda Superb. It's a well-equipped car and huge value for money. On top of that, its rear legroom is pretty much unmatched - stretched limousines aside. Our only reservation was with the styling, which is a little dull. The new Superb Combi (that's estate to you and me) retains the positives, adds a cavernous boot and looks much better. Do you even need to read on?

The passenger compartment of the Superb Combi is unchanged from the saloon's, which means a well-made cabin with acres of space. You really have to see the amount of rear legroom in this car to believe it: we're not exaggerating. The switchgear is shared with other VW Group cars so it's tactile, well-positioned and intuitive to use for the most part. The styling of the dashboard won't excite design-conscious buyers, but it all works well. Neat touches include umbrellas fitted into the rear doors and a boot light that detaches to operate as a torch.

On the outside, where the four-door Superb saloon wears its long wheelbase awkwardly, the Combi looks well-proportioned. It's an elegant shape.

Our test car was equipped with the most powerful TDI engine, the 2.0 170hp version. It balances economy and performance well, giving even this large car a decent turn of speed when required. That's thanks to the hefty 350Nm of torque available at just 1,750rpm. Bear in mind though that it's not as silent as we'd like while at a motorway cruise.

Few drivers of cars like the Superb will care for fast gearchanges, which is just as well, as the standard six-speed manual gearbox is a little slow across its gate. Admittedly it's nicely weighted and relatively slick. Skoda offers the dual-clutch DSG automatic gearbox too, which is a good partner to the TDI engine, though it pushes the cost of the car up significantly.

The Superb gets the basics right, with loads of adjustment to the steering wheel and driver's seat and decent visibility out. The controls are light and easy to use too. Naturally the suspension is biased towards comfort more than cornering prowess. That's great when the car is full of people and luggage, but we noticed that it's a little less settled with just the driver on board. Nonetheless, it's competent in most scenarios.

Skoda used to be purely a budget brand, but nowadays - while it's still good value - it's way above the likes of Kia and Hyundai in the pecking order. The cheapest Superb Combi can be had for about €25,000, though our test car cost over €33,000. That sounds like a lot of money, but in comparison to direct rivals it fares well. The Ford Mondeo Estate and Opel Insignia Sports Tourer are both more expensive. The VW Passat Estate is curiously not available with the TDI 170 engine, and though, like-for-like, it and the Superb are closely aligned in price, the Skoda is better equipped.

In our week with the Combi we averaged 6.7 litres/100km (42.2mpg). That included a mix of urban roads, a couple of long motorway journeys and a little fast country road driving. This model emits 155g/km, which puts it into tax Band C.

Estates are relatively small business in Ireland. We expect that to change a little as customers move away from SUVs and in the case of the Skoda Superb we'd strongly urge buyers to stump up the extra €1,000 for the Combi estate version. It's one of Skoda's most impressive cars to date.