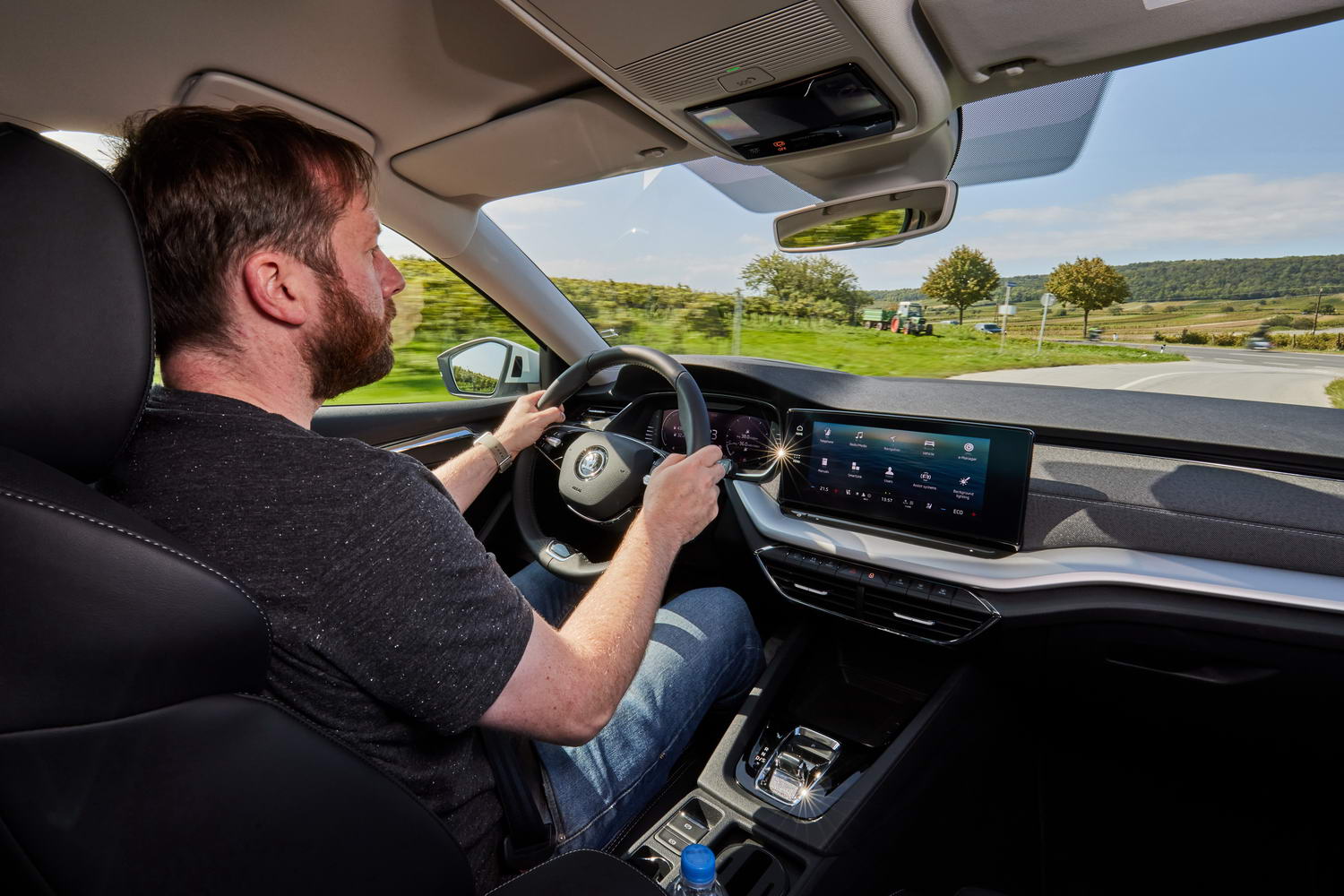 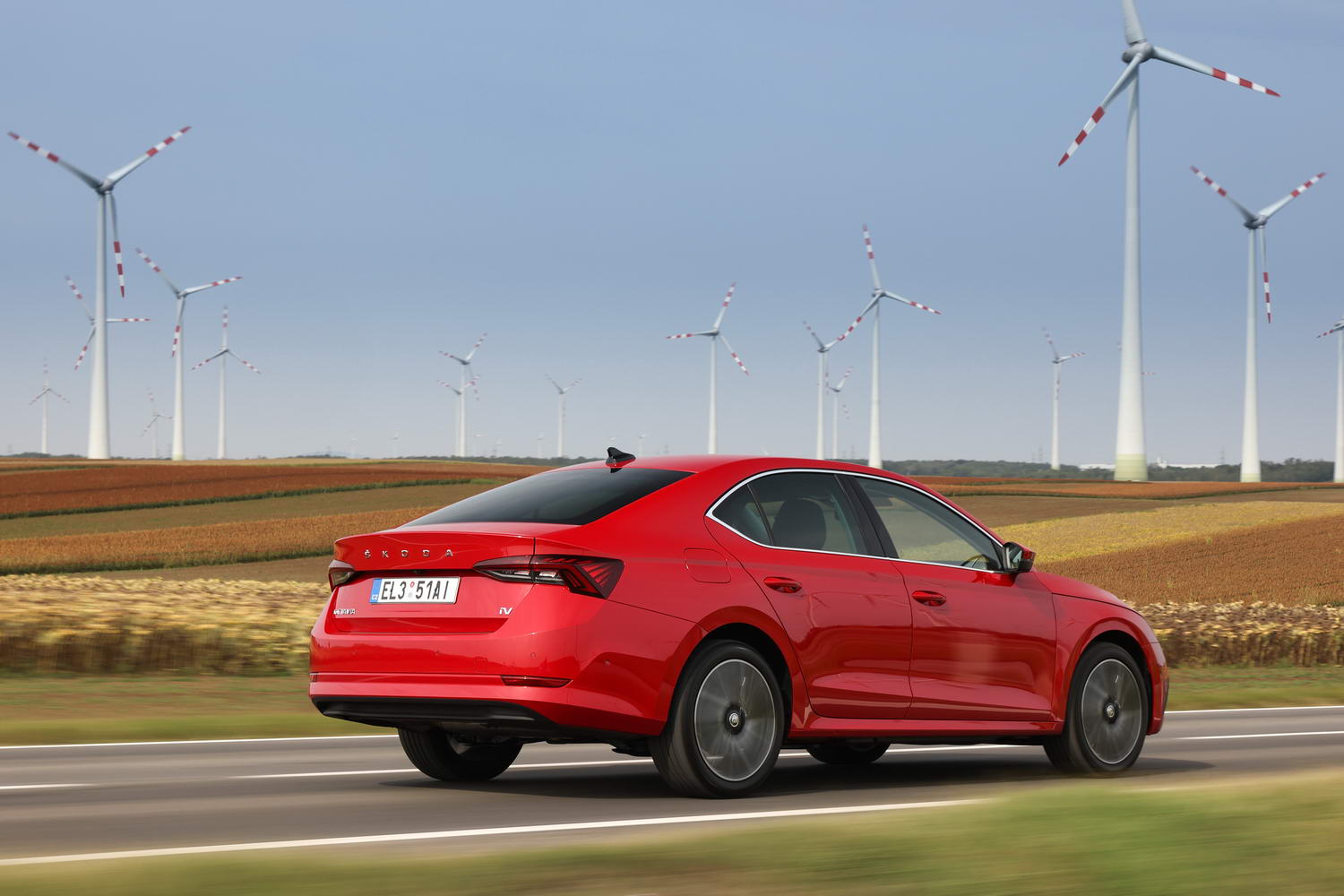 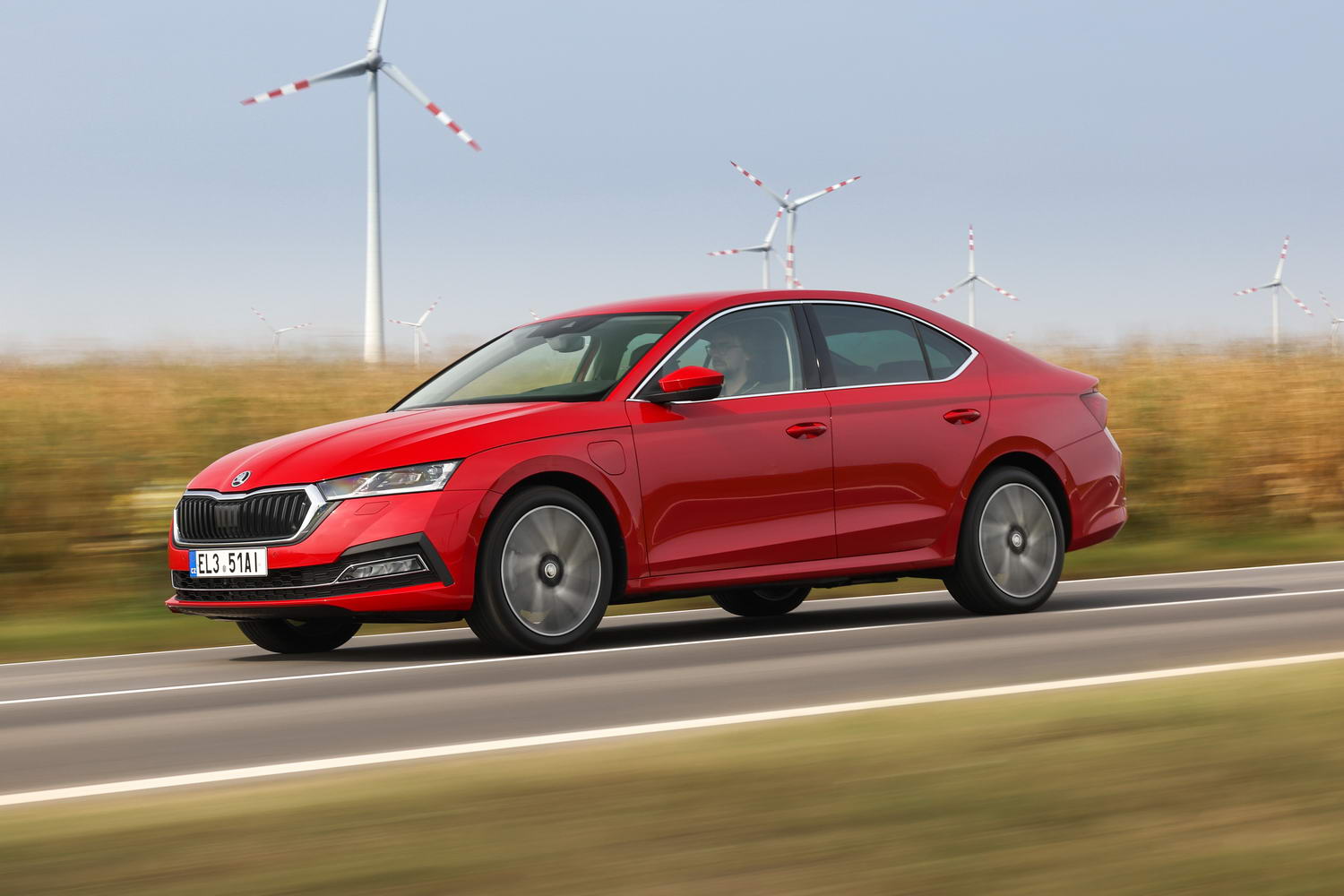 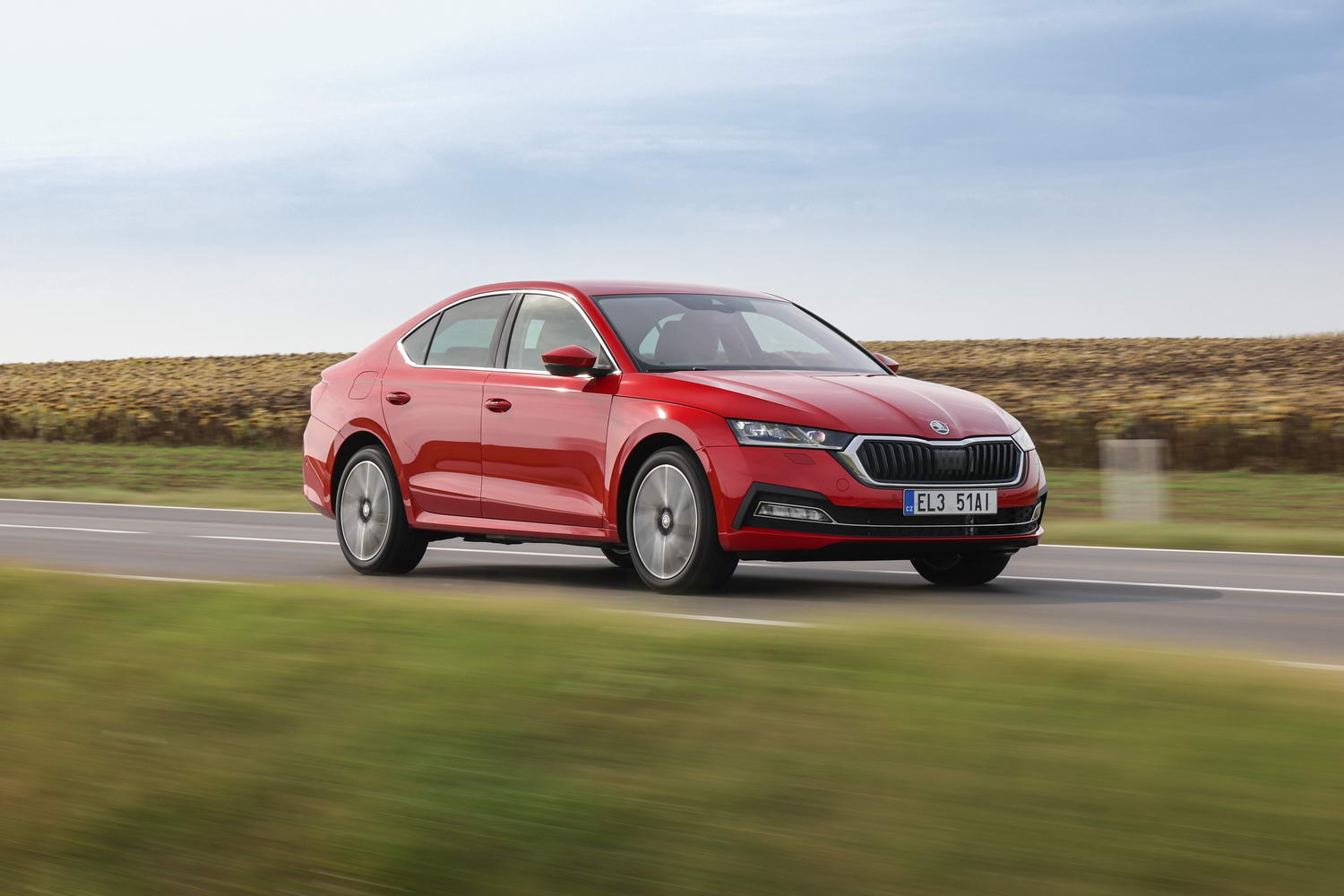 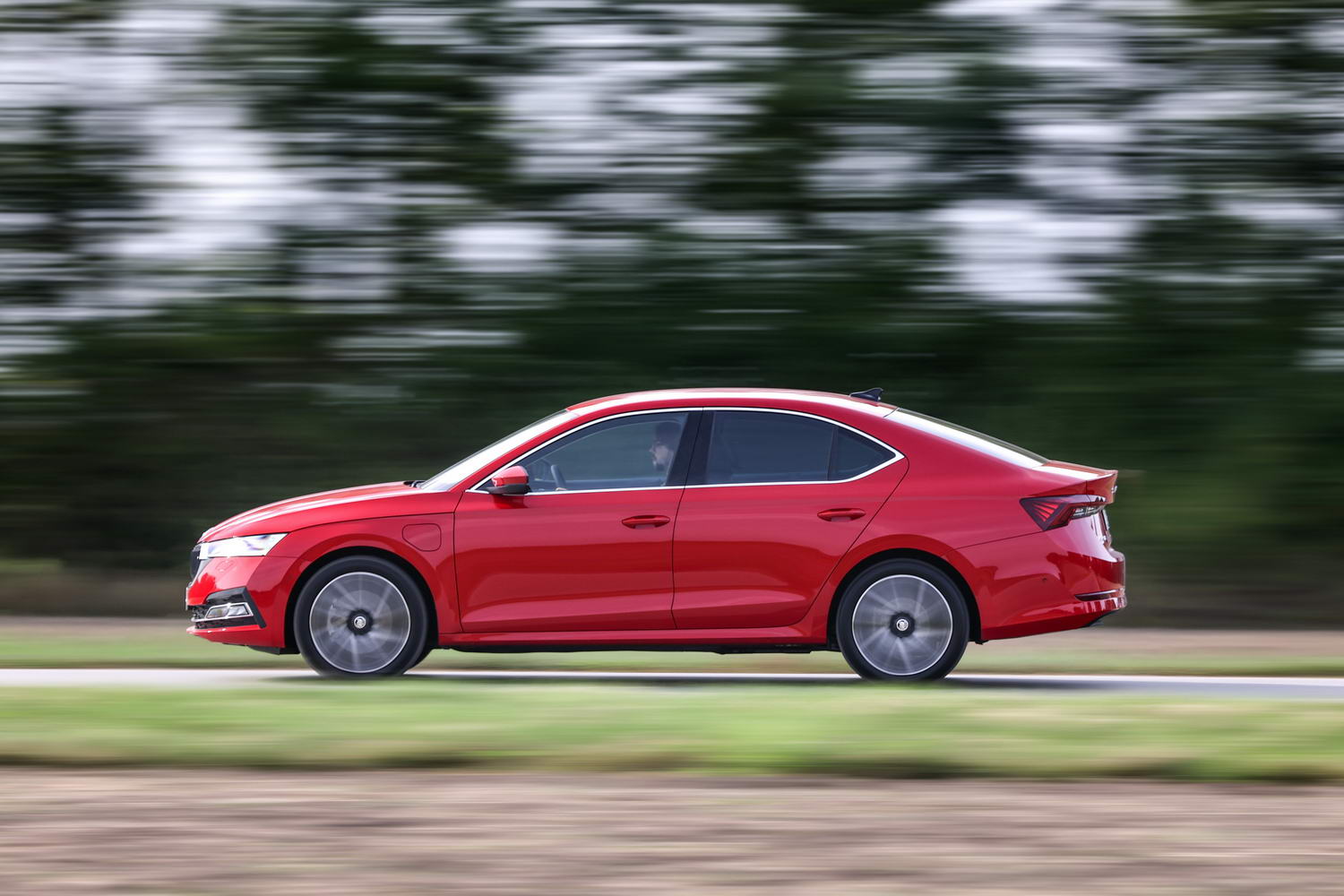 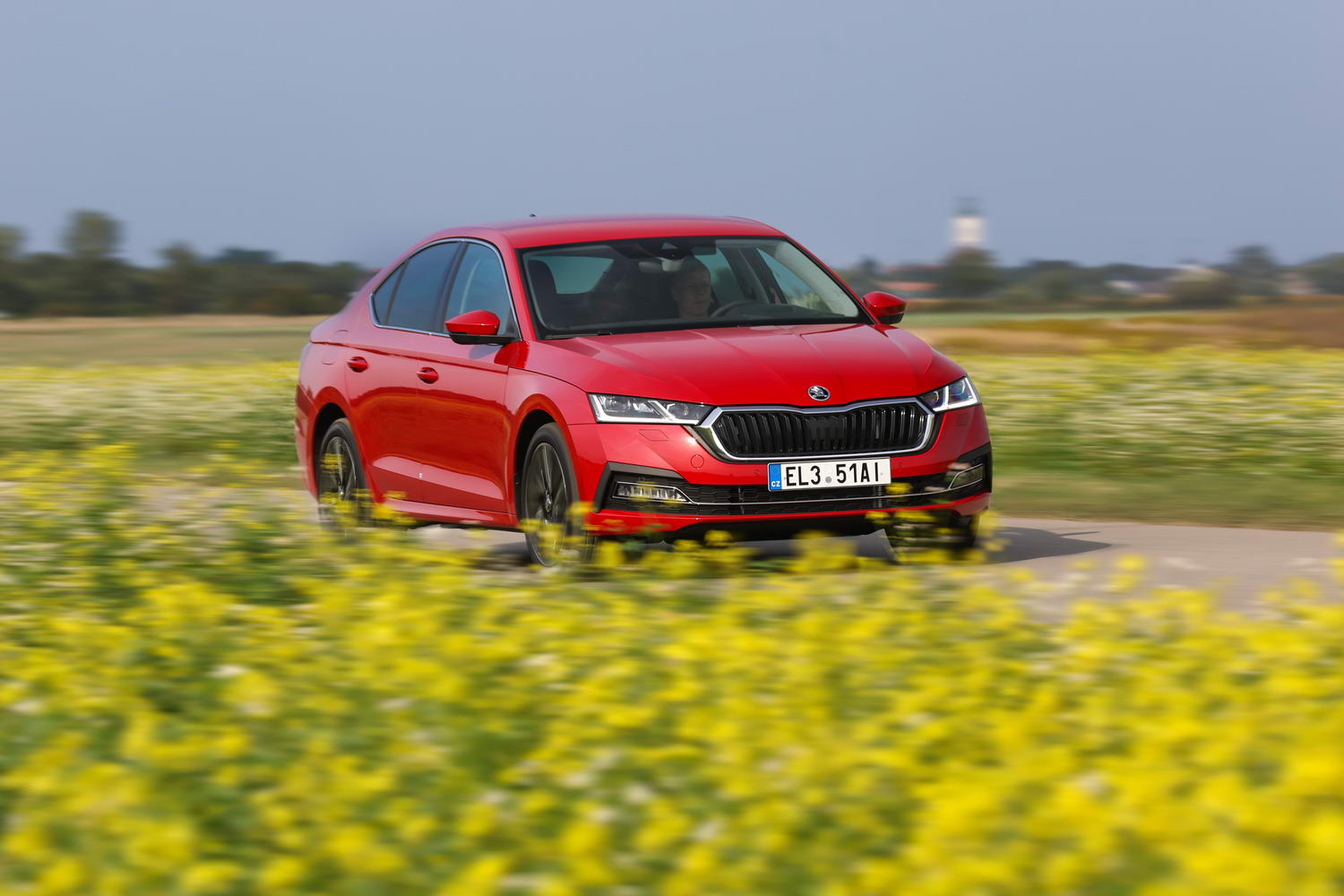 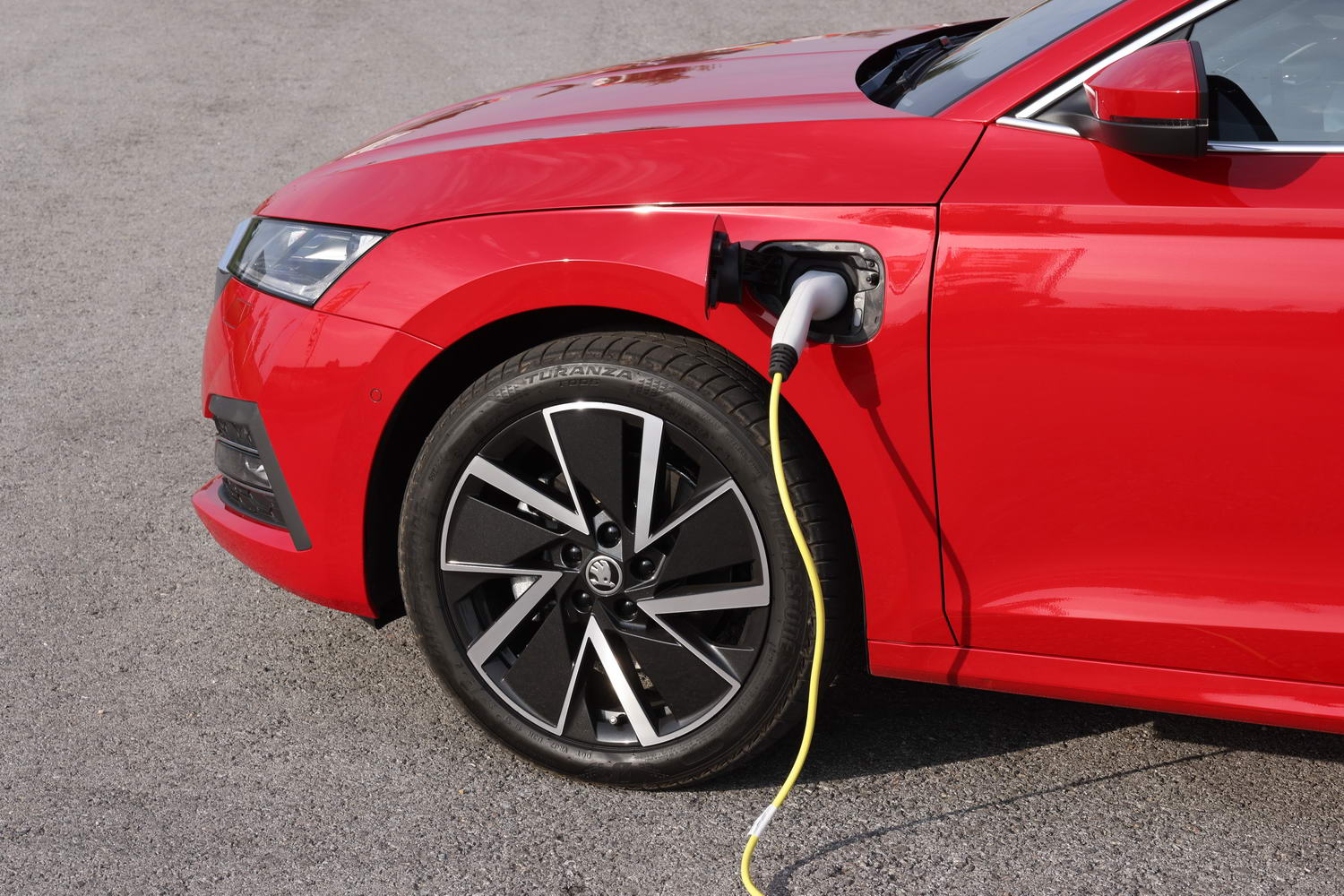 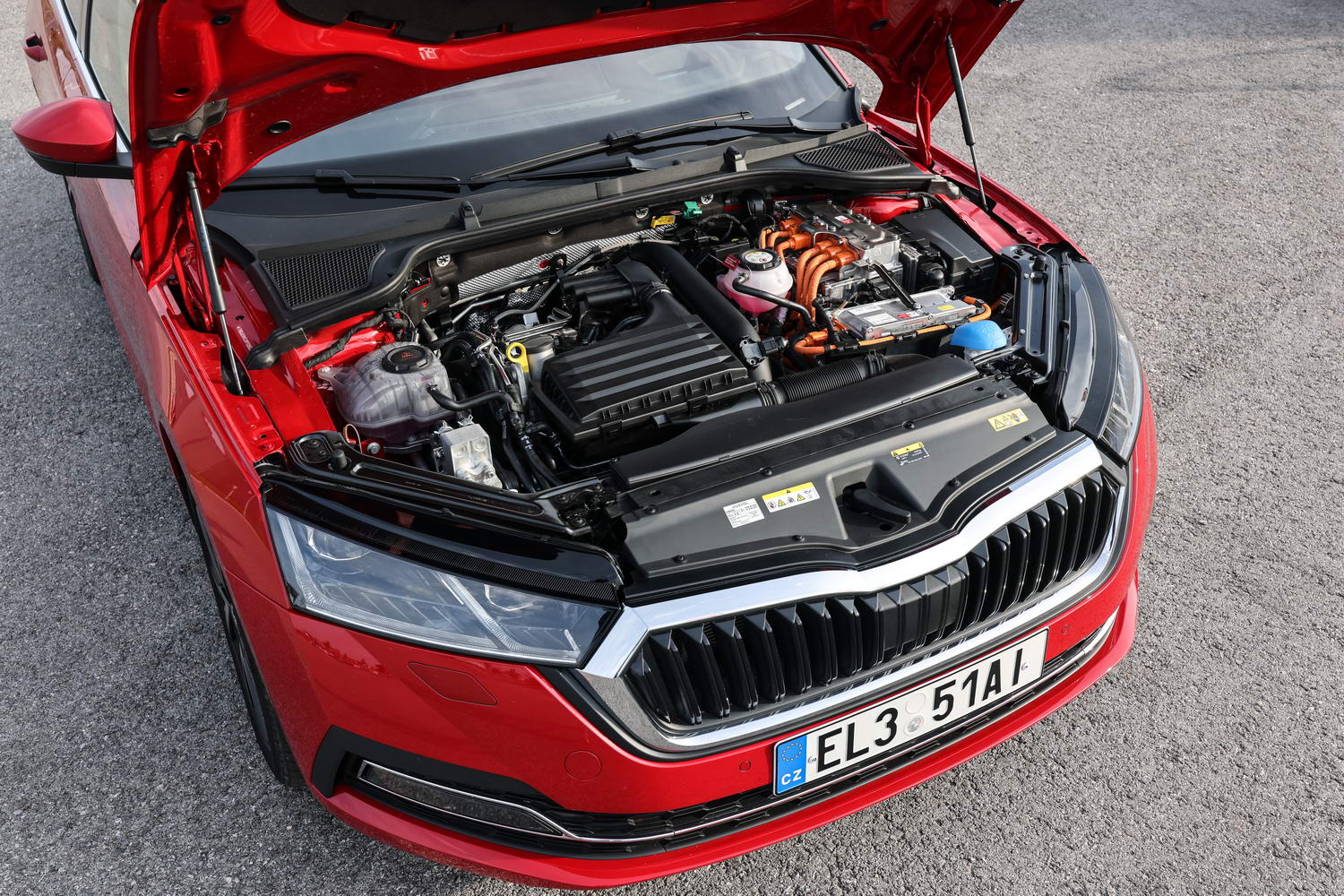 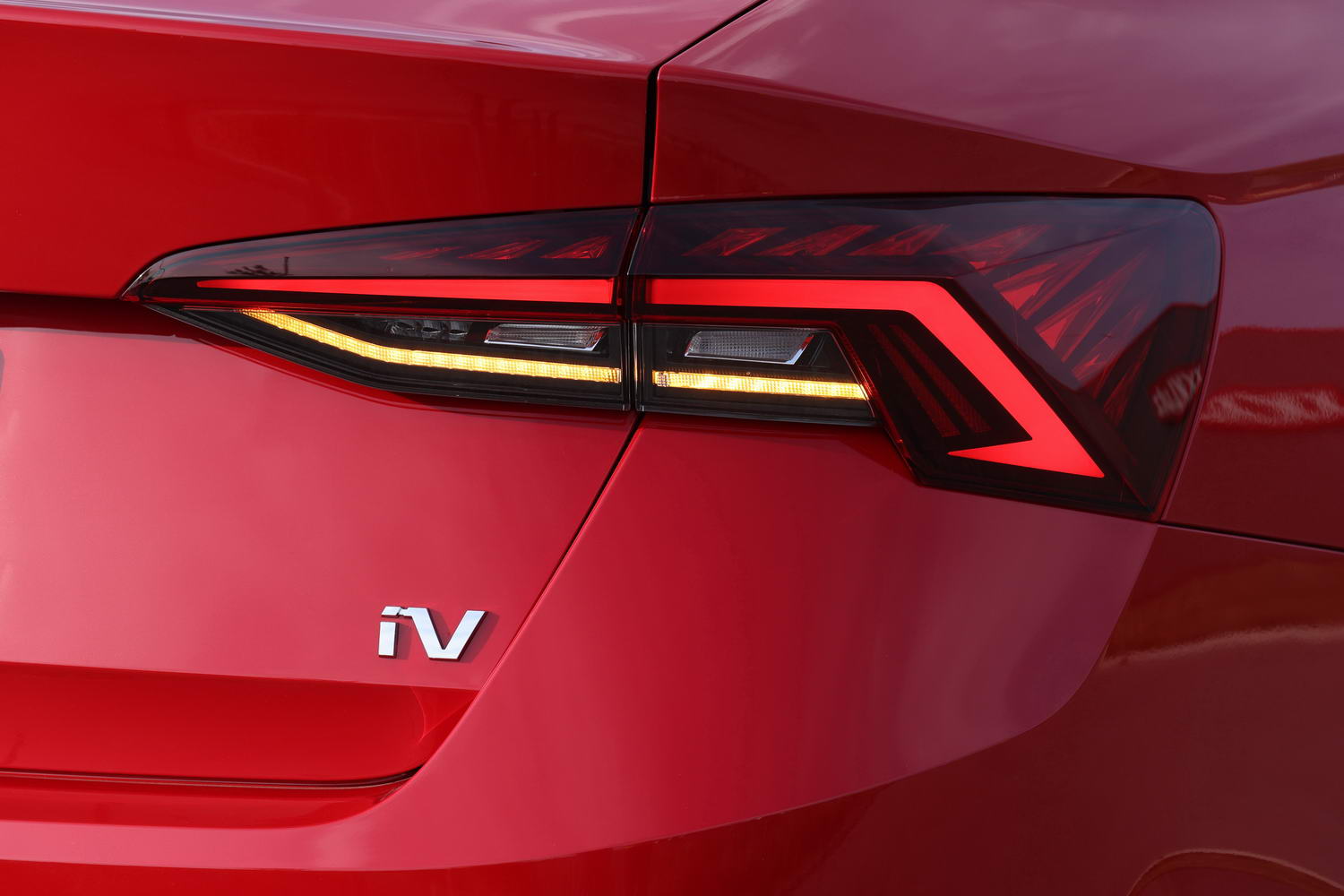 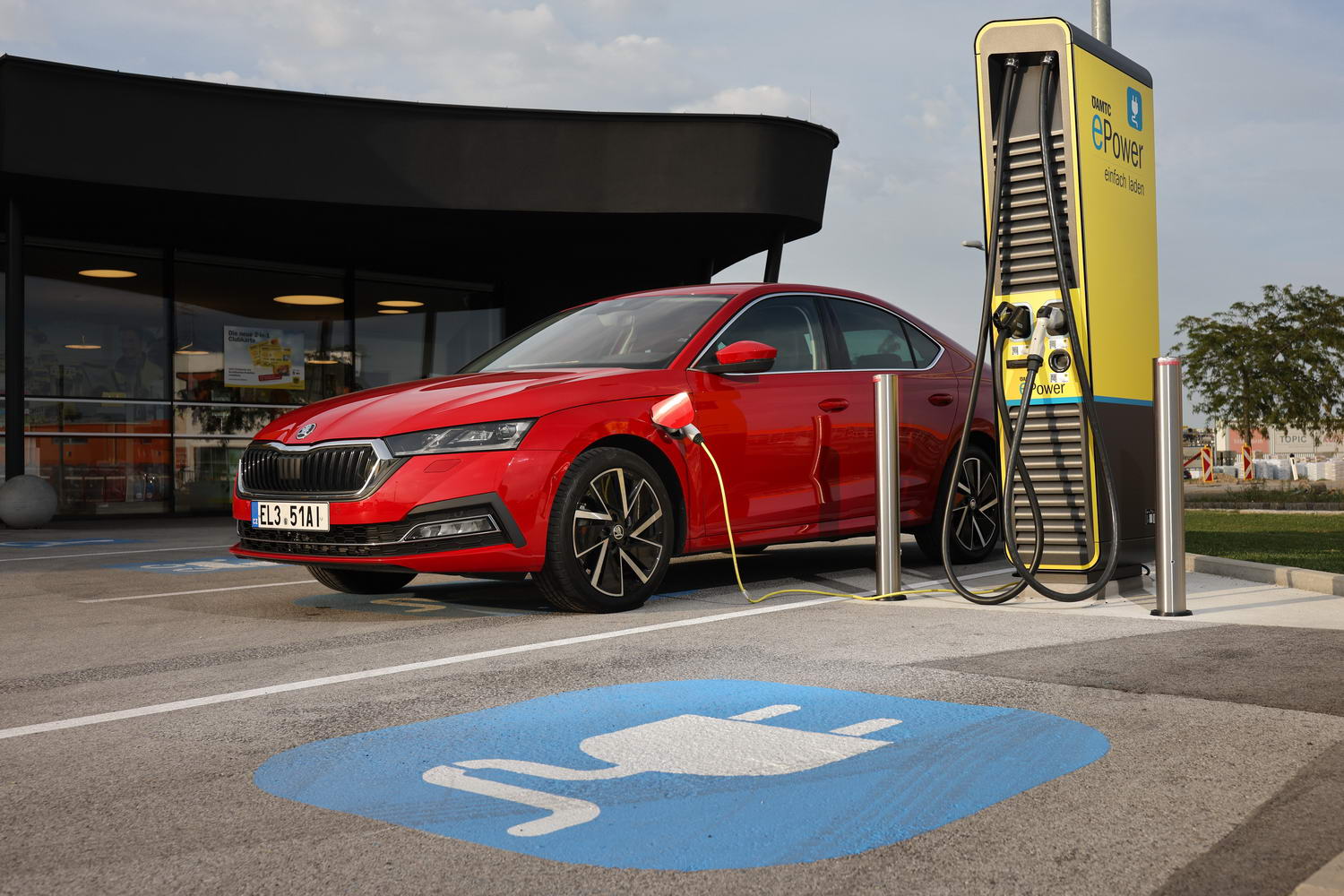 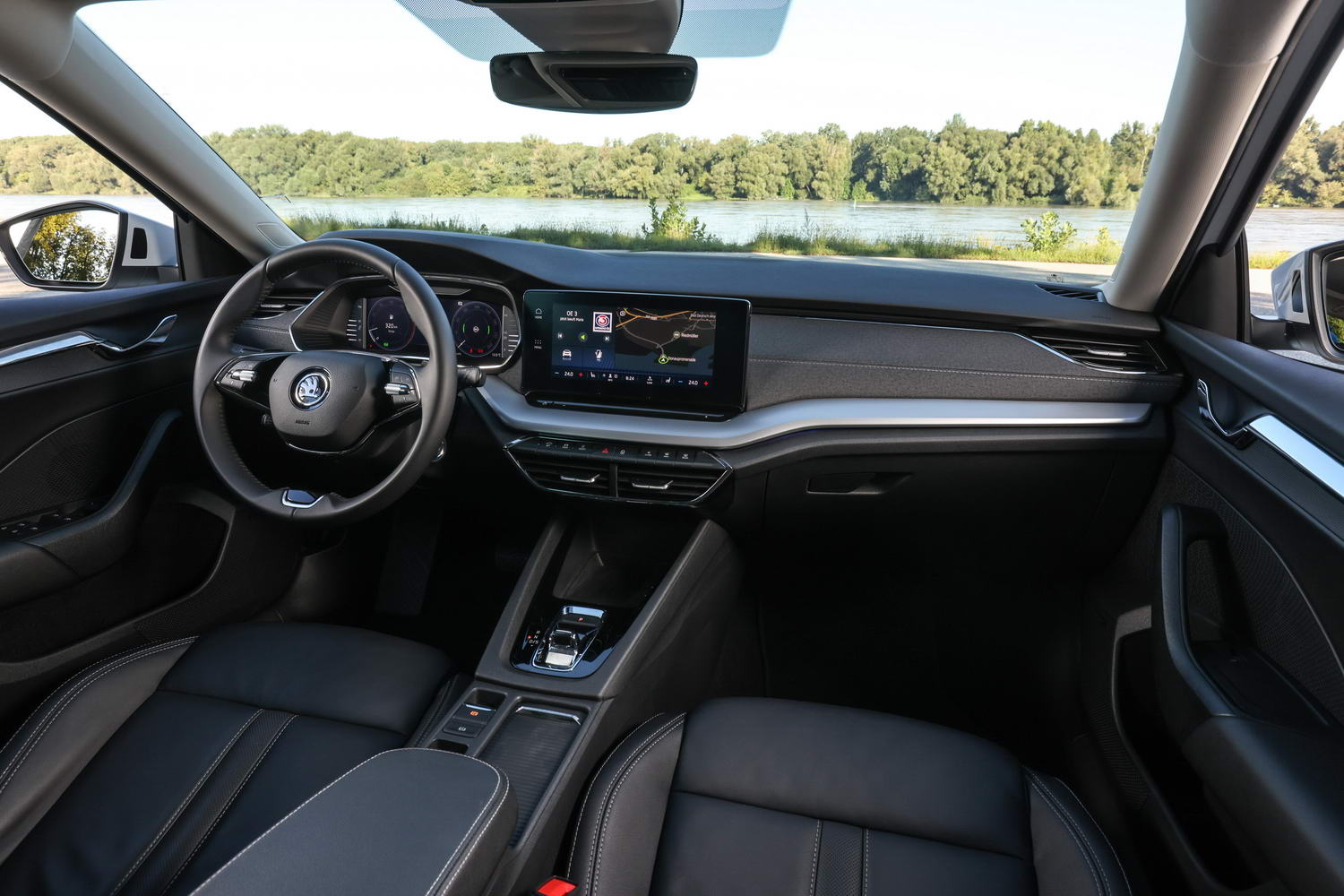 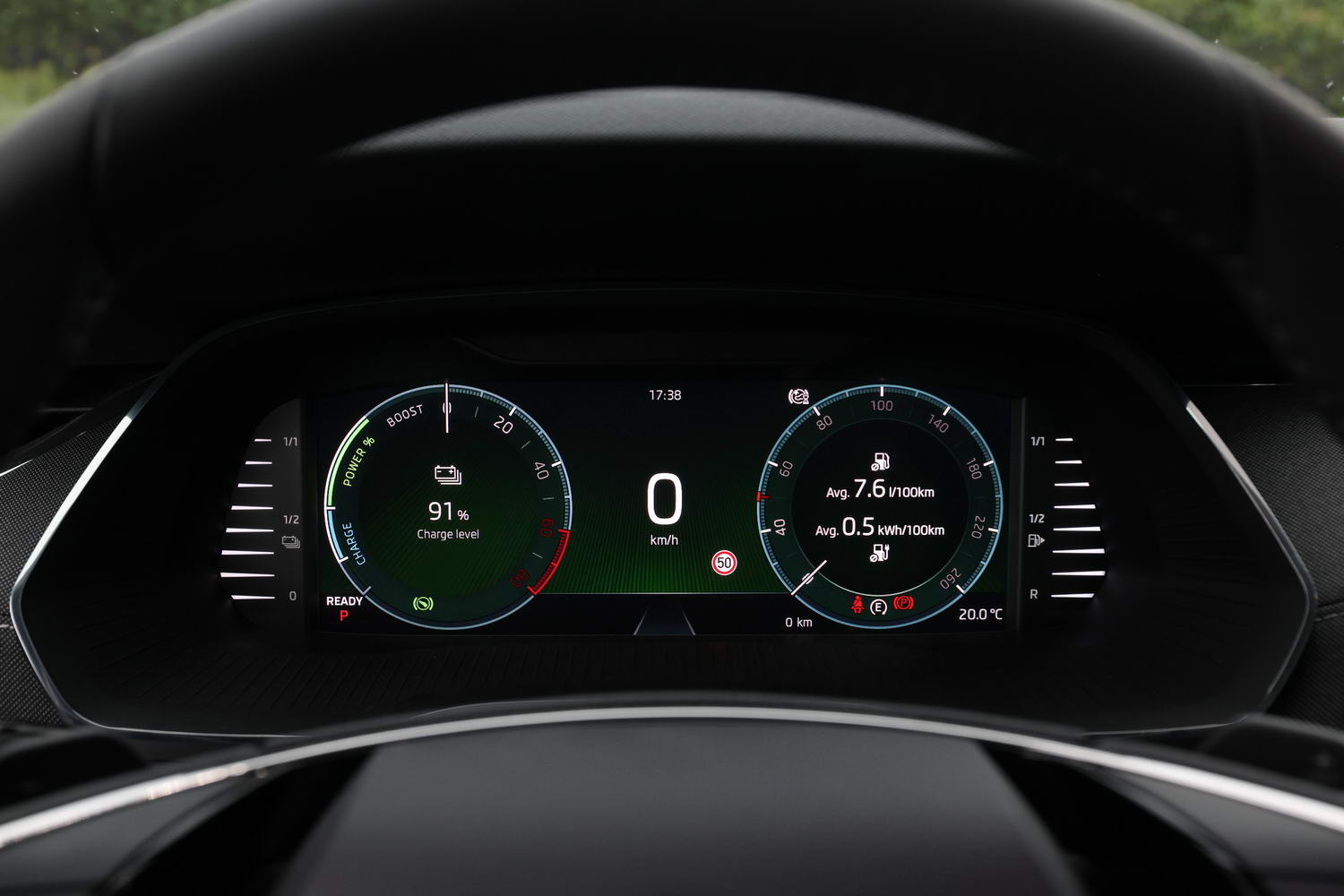 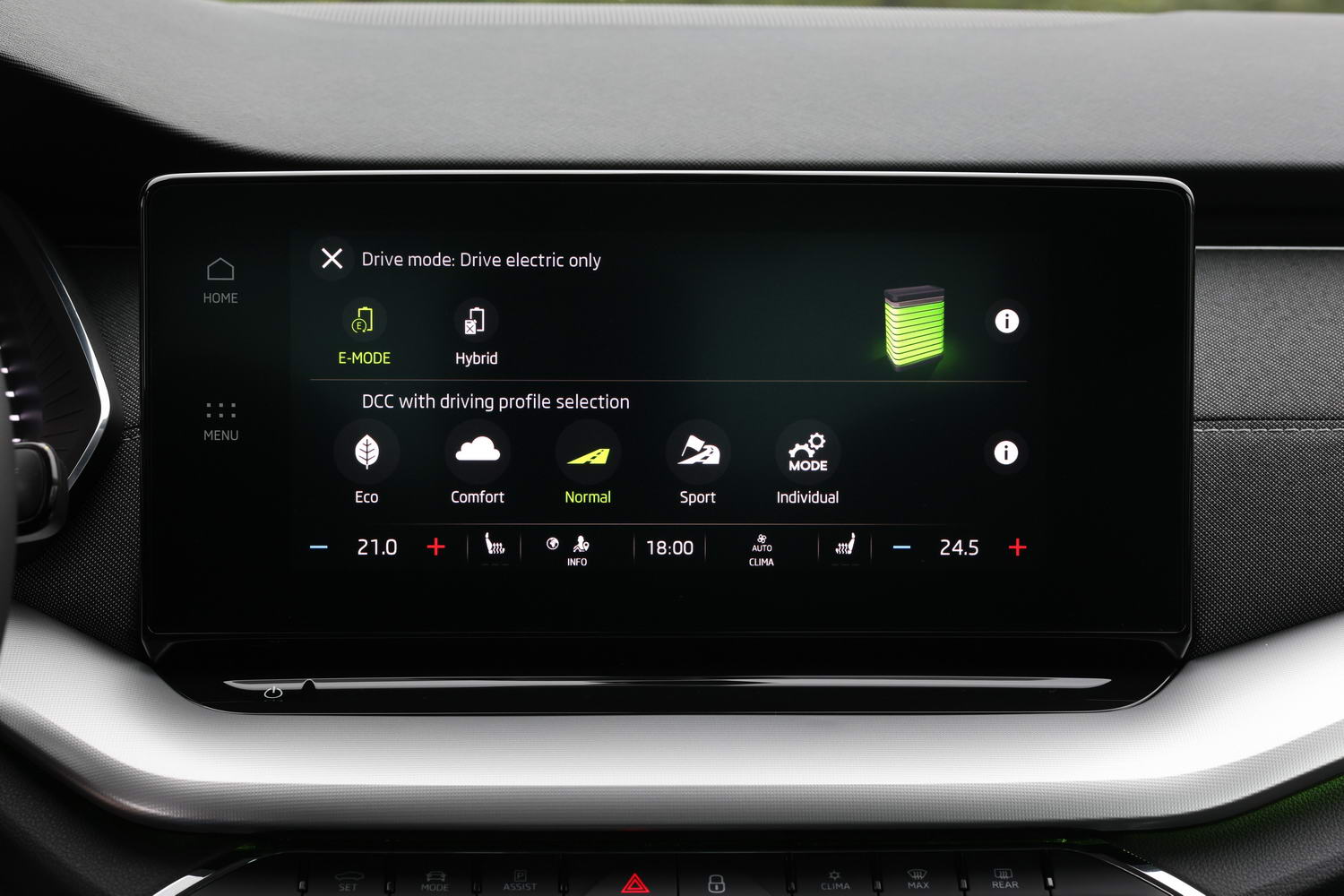 The Skoda Octavia iV plug-in hybrid uses much of the same hardware as the sportier Octavia RS iV. Although it produces slightly less power, the result is a car that's nicer to drive and is capable of delivering very efficient journeys with an added level of refinement.

You'll need to look closely to spot if it's a Skoda Octavia iV you're looking at. It is all but identical to the diesel or petrol-engined Octavia models, apart from a small additional flap on the front passenger-side wing for the battery charge port and the iV badge on the boot. It's available with aerodynamically optimised wheels to help reduce drag and improve performance, too.

There are some minor differences inside, notably being a reduction in boot capacity from 600 litres to 450 litres, on account of where the 13kWh lithium-ion battery is placed behind the rear seats. Still, that leaves the Skoda with decent luggage capacity for the segment, comfortably exceeding what's available in the Ford Focus, Toyota Corolla and Volkswagen Golf, to name but a few.

The good news is that, although the boot is smaller, there is no impact on the amount of space for passengers in the rear. Other than a moderately chunky transmission tunnel in the centre, head- and legroom are at the upper end of what the class offers. Up front it's a classy affair with a modern look and material quality that is, as in the regular Octavia, a step up for Skoda. Yes, there are some cheaper plastics to be found if you go searching for them, but in general, anywhere that you can see or are likely to come into contact with is perfectly acceptable. The 10-inch touchscreen looks sharp and is easy to use on the move, thanks in part to the shape of the dashboard, which makes it easier to rest and support your hand on. Being a plug-in hybrid, the Octavia iV's infotainment system does include the usual extra menu pages for managing charging and choosing how you want the powertrain to function.

We found that the sportier Octavia RS iV, which uses a higher output of the same plug-in hybrid system, failed to live up to expectations. But bizarrely, this less powerful version is the better of the two to drive. Part of that can be attributed to the lack of any contrived performance features, so it rides with greater comfort and ultimately it isn't trying to be something it's not.

The 1.4-litre TSI petrol engine alone produces 150hp and it runs both smoothly and quietly when it does activate. However, to get the most from the Octavia iV it's best to utilise the electrical aspect of the hybrid system as much as possible. With a full charge the battery can provide enough power for up to 60 kilometres and, if you stick to mostly urban driving at lower speeds, that figure seems reasonably attainable. The electric motor is fairly punchy too, delivering 330Nm of instantaneous torque and up to 116hp. That's sufficient for it to propel the Octavia beyond motorway speed limits using only its electrical power, though doing so will deplete the battery faster.

The handling isn't adversely affected by the added weight of the plug-in hybrid system, with the suspension adjusted to compensate. The ride quality is a little on the soft side, but this isn't a car that encourages you to press on and drive with greater fervour. Instead, it's better to enjoy the comfort and appreciate the refinement that using the electric elements of the drivetrain brings.

With many of the latest cars now moving to using gearboxes with a higher number of ratios to improve efficiencies, it seems surprising that Skoda is sticking with a six-speed unit for the Octavia iV. But just as it uses the older 1.4-litre TSI engine, part of the decision is down to cost management and it enables Skoda to integrate the electric motor inside the gearbox. When the need arises, the switching between electric and combustion motors occurs gently and without any jerkiness. You can choose to switch to the fully electric mode at any stage while driving (if you're not already in it - and providing there is sufficient charge in the battery), and as soon as you select the E mode the distant four-cylinder engine sound fades away.

Recharging the battery can be done in as little as 2 hours 33 minutes when charging to 80 per cent using a 3.6kW wallbox, but it requires another 60 minutes to fill in the remaining 20 per cent. If you don't have a dedicated charger at home you can use the cable that plugs into a domestic three-pin socket, but this will take five hours to reach 100 per cent.

There is still some time to wait until Irish pricing for the Octavia iV range is confirmed, which also goes for the CO2 and fuel consumption figures. However, if the current government supports remain in place, the Octavia iV could be an appealing financial prospect, especially for company car drivers. As soon as pricing is confirmed then this section of the review will be updated to reflect a value-for-money rating.

The Skoda Octavia iV is at the better end of the plug-in hybrid performance spectrum thanks to its official electric driving range. If you're not yet ready to switch to a fully electric car, this is a potentially great stepping stone as you won't be limited by the need to charge in a hurry. However, being conscientious about plugging this car in will help reap the financial savings of running a plug-in hybrid. 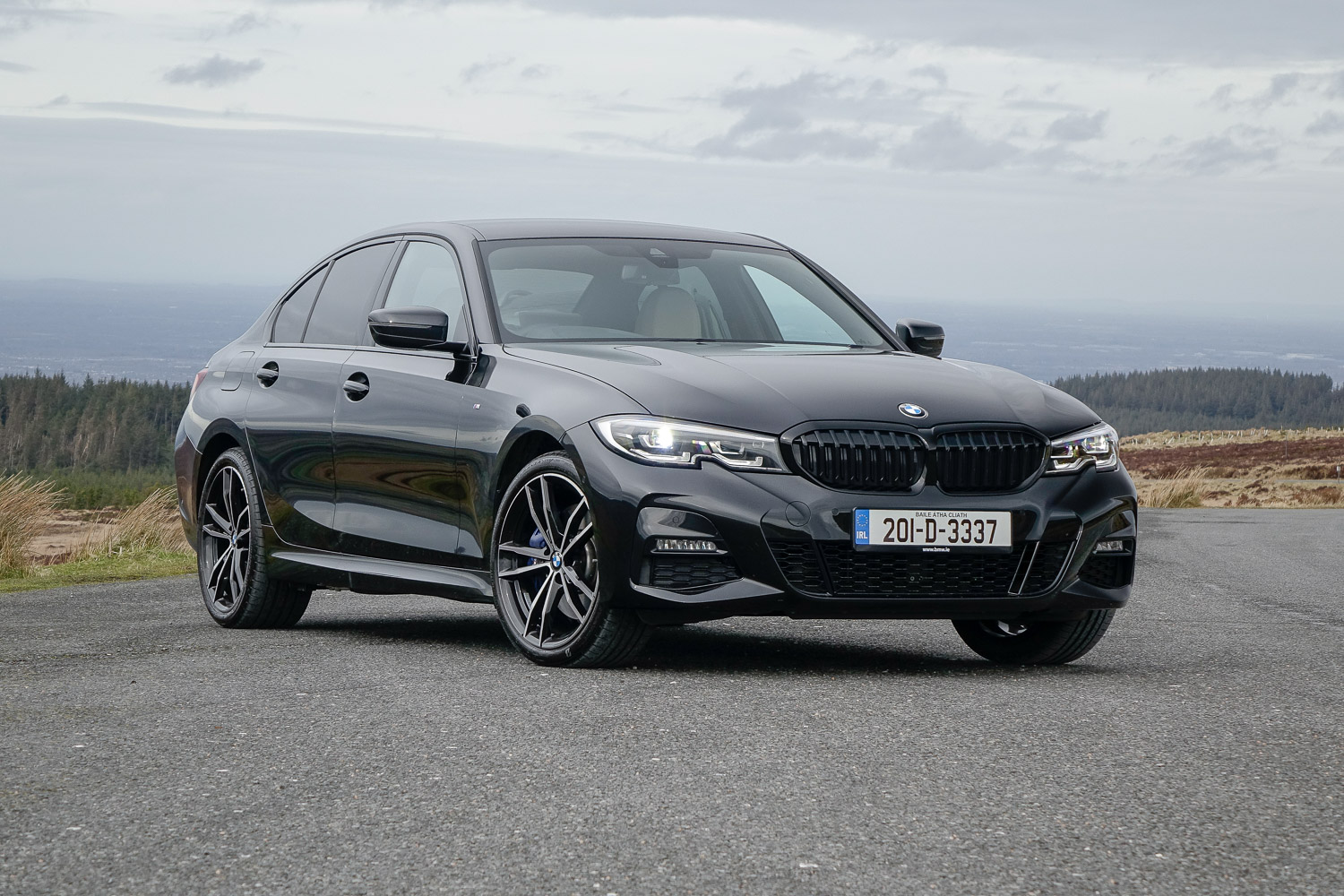 BMW 330e hybrid (2020) review
BMW 330e vs. Skoda Octavia iV hybrid (2021): a better handling car with much more performance on tap, but carries a premium price and is less practical. 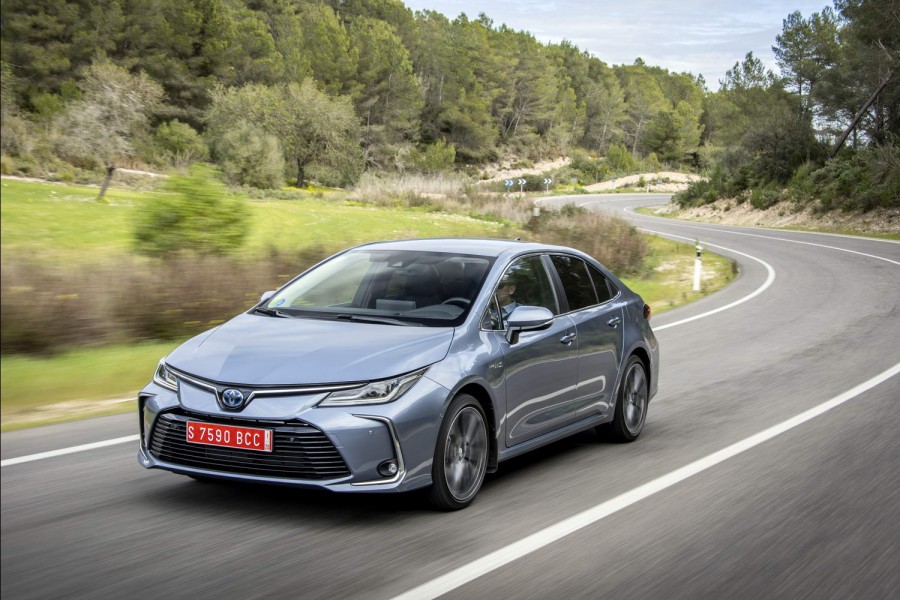 Toyota Corolla 1.8 Hybrid Saloon (2019) review
Toyota Corolla vs. Skoda Octavia iV hybrid (2021): no plugging in with this conventional hybrid, but it's significantly better to drive than its predecessors.