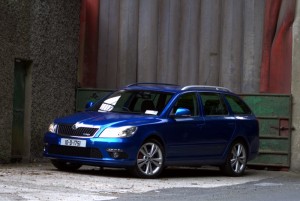 Could Skoda have created its own niche with the Octavia Combi RS TDI?

There's something about fast estates that really appeals. Skoda's 'hot' brand in Ireland is RS and the Octavia RS comes in five-door hatchback and Combi (estate) guises. I'd have the latter every time, despite the €1,000 or so premium. Engine options at this level are 2.0-litre turbocharged petrol or diesel. The 2.0 TSI petrol engine costs about €2,000 more to buy and its annual tax bill is about double that of the 2.0 TDI version tested here.

Badging aside, you'll not spot the difference between them. All RS models get a modest body kit, which mostly consists of more body-coloured parts. It's an effective overhaul though, especially when finished in the eye-catching blue colour of our test car. That's complemented by a strip of LED daytime running lights up front and a tasty set of 17-inch alloys (the car pictured is riding on the optional 18-inch rims). Overall it looks sporting without any hint of the dreaded 'boy racer' about it.

There are plenty of clues inside the Octavia to remind you that you're in the RS model. Part leather seats are standard, as is a sportier leather steering wheel, gear lever and handbrake grip. Despite that the gear knob itself is way too chunky for our liking and the perforated design of the leather on the steering wheel would feel of better quality if it was just flat. It's also strange that this car hasn't any steering wheel mounted stereo controls. Sure, there's some functionality through the on-board computer (accessible via the wiper stalk), but that's just not as intuitive as a separate set of controls on the spokes of the steering wheel.

Elsewhere, the Combi RS impresses. Passenger space front and rear is quite good, but it's the boot space that really stands out. It's a deeply shaped volume too so should prove really useful.

Petrolheads may bemoan the widespread movement to diesel power, but there's nothing wrong with the performance on offer from the Skoda's 2.0 TDI engine. Peak power is quoted as 170hp, but it's the torque figure of 350Nm that's more important, making the Octavia fast at all times, without the need to rev the engine hard. A 0-100km/h time of 8.4 seconds is claimed, which is perfectly quick enough for a big family car.

If you're considering buying this car, try to drive one with and without the optional larger alloys. They cost only €390 extra, and look fantastic, but I suspect they contribute to the poor ride comfort. It's just about on the acceptable side of firm - especially when you consider that this is an estate car, likely to be used to transport kids, friends and possibly the occasional fragile luggage.

The upshot is that there is very little body roll when you drive a little quicker. This aids high-speed stability and makes the Octavia feel very assured under heavy braking. Keener drivers may notice the lack of information through the steering wheel, but otherwise it's quite a precise drive. Skoda also offers the twin-clutch DSG automatic gearbox in this car.

We reckon the Skoda Octavia RS sits in a little niche of its own, especially so in TDI Combi format. VW's Golf GTD shares its mechanicals, but it's substantially more expensive and not available as an estate. SEAT sells the Exeo ST for a little more than the Skoda, but it's not available with the 170hp TDI engine in Sport guise in Ireland for some reason. So if you want a fast, frugal estate that looks good and isn't afraid of a bit of fast cornering, the Octavia Combi RS could be your only man.