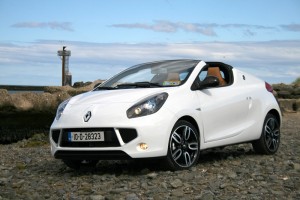 We grab an exclusive first drive in the eye-catching Renault Wind. Should it go on sale here?

This isn't a regular First Drive, as the Renault Wind has not yet been confirmed for sale in Ireland. CompleteCar.ie has been entrusted with Renault's sole example of the car to test and offer feedback. We had a 1.2-litre TCe version of the Wind for a little over a week and drove it roof up and down in Dublin city, on the motorway and through some of our favourite testing back roads.

There is little on the road as eye-catching as the Wind. Of all the cars I've driven through the years only supercars can compete with the amount of attention this car attracted. No doubt some of that is to do with the fact that it's the only Wind in the country, but it's also a seriously striking shape. It's best taken as a whole rather than focusing on the details, as the top of the B-pillars behind the doors looks a little untidy when the roof is up. The unique jewel-like lights and compact roadster shape really draw the eye though.

The cabin is best described as 'snug'. It's strictly a two-seater and there's not a lot of storage for anything else. The dashboard is obviously based on that of the Renault Twingo's, but the whole interior is lifted by the presence of a pair of tasteful tan leather seats and matching inserts in the doors. Without these the cabin risks feeling a little cheap, despite a glut of equipment.

As Renault has yet to commit to selling the Wind in Ireland it's tricky to address what your hard earned Euro will get you. In the UK pricing for the Wind starts at less than the Mazda MX-5 and Peugeot 207 CC and sits between the MINI Cooper and Cooper S. If Renault Ireland adopted a similar pricing stance it could be priced from as low as €20,000.

Entry-level versions get 16-inch alloy wheels, cruise control, electric mirrors, front fog lights, a CD/mp3 stereo, twin front and lateral airbags, ESP, ABS with EBD, brake assist, as well as an immobiliser and deadlocks. The next level up adds 17-inch alloys, automatic headlamps and wipers, climate control and Bluetooth. The test car had all of the latter, but appears to be one of the limited run 'Collection' models, which explains the leather seats and gloss black roof.

To maintain a high quality feel the Wind really needs this level of equipment.

The Wind is based on the petite Renault Twingo and its dimensions give that away, but from behind the wheel it feels quite different and much more 'mature'. The damping is spot on around town, easily soaking up speed bumps and keeping kickback from potholes to a minimum. No doubt the smaller 16-inch wheels would add more comfort thanks to their taller tyre sidewalls.

There's no discernible flex in the car's body either. This becomes apparent as you push the car down a typical twisty Irish back road, with all its bumps, surface changes and surprises. The Wind clings on for dear life and it's remarkably nimble.

However, the 100hp, turbocharged 1.2-litre engine lets the package down. Some will appreciate how quiet it is, but that detracts from its sportiness. Worse than that, it feels quite underpowered and you really need to thrash the little thing to keep up a decent pace. This it can do, but it seems at odds with the car's personality and is unlikely to be in line with the driving style of its target audience.

We suspect that the 1.6-litre, 133hp engine used in the Twingo Renaultsport will better suit the Wind, though that falls into Band D with 165g/km of CO2, where as the 1.2 is in Band C with 145g/km.

The 1.2 doesn't feel out of its depth on the motorway, but you do find yourself pushing the accelerator all the way down just to keep up with traffic. You'll not drive very far on the motorway with the roof down either, as your hair do will not survive...

Unlatch the lever at the front of the roof, hold a button down and it takes only 12 seconds to drop the top. It neatly pivots into the rear 'hatch'. It must be quite light, as opening the boot is never a difficult task. As a bonus, the boot space remains the same at 270 litres whether the roof is up or down. It's a neat, clever solution, though the car isn't all that light, weighing more than a MINI or Mazda MX-5.

Let's not beat about the bush: the market in Ireland for small two-seat roadsters has never been a big one, even in the halcyon boom times. That's not about to change in a hurry. However, the affordable two-seaters that are available are all relatively long in the tooth. That includes the Opel Tigra and Mazda MX-5. Renault may not sell ship loads of the Wind, but its timing could be about right to steal a sizable chunk of the segment. If nothing else it could be used as a sort of halo model for Renault, showing Irish buyers that the brand stands for more than a good scrappage deal.

What do you think? Drop us a message through the contact form to have your say on whether Renault should import the Wind.