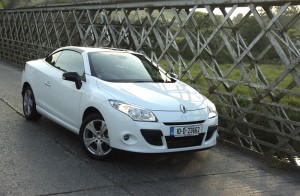 Renault is launching a new Coupé-Cabriolet even though its rivals' models are recording low sales.

The Mégane Coupé-Cabriolet launches in Ireland next week and is the latest incarnation of the Mégane range, which now is made up of five-door hatchback, Coupé, Grand Mégane estate and - if you count Fluence - saloon.

Our test car was fitted with Renault's now ubiquitous 1.5-litre dCi diesel engine, which has 110hp. However, in this Coupé-Cabriolet version it has to push around an extra 160kg of weight, 110kg of which is made up of by the folding glass roof. This roof does the usual origami to neatly tuck itself away into the back at the push of a button, taking away from what is a decent sized boot when the roof is up.

First impressions are quite good. It is a pretty car, not anywhere near as awkward looking as some of its key rivals, such as the Ford Focus Coupé-Cabriolet. Plus, Renault has thrown the kitchen sink at it - and then some - when it comes to equipment. Out of the box you get things like dual-zone climate control, Bluetooth audio and telephony and a built-in TomTom satellite navigation system. Try adding that to an Eos and you will wince at the bill.

In gleaming white this car isn't subtle and at the risk of sounding un-PC, is probably more suited to the fairer sex. Certainly it is they who are noticing as we take our first spin through the capital's streets.

Later in the evening I offered to give my brother-in-law and his mate a lift to the pub. This is where the limitations of the car's rear seats start to show themselves. My wife has to sit behind me and I am not comfortable unless my seat is back fully (I'm tall). Both rear seat passengers are thankful that the journey doesn't take long.

It is 5.25am and I am returning a favour to a neighbour by dropping him off for an early flight and his luggage just about squeezes in. There is no issue with width, but the aperture is quite low and it makes for a cosy suitcase.

He likes the car though, noting the satnav is particularly impressive. The weather is good so the roof stays down and on the motorway as long as the windows are up it is a pretty good place to spend time. With weather this good, you don't really care what you are driving, as long as it is convertible, but the Mégane is something of a grower. I'm definitely starting to like it.

I just noticed something very cool this morning. When someone calls you while your phone is connected to the Bluetooth phone, they get a voice message, while it is ringing to say that you are currently driving. Very clever.

Handling-wise, this car isn't all that dynamic and isn't a match for the Focus CC, but while there is a lot of understeer most owners will probably appreciate that this isn't even trying to be a sports car, but more of a cruiser and at that it does a pretty good job.

It is another early start to catch a flight and time to return the Mégane. When you look at the price of this car then it does look like a bit of a bargain. It will cost you €31,900, which itself is almost €2,000 cheaper than the cheapest 1.6-litre petrol Ford Focus CC - and a massive €6,205 less than a diesel one. A diesel VW Eos will cost you €8,745 more than the Renault, with less equipment.

But, as this car qualifies for scrappage, then you can have it for €4,000 off list price if you avail of both the government's and Renault's discount when trading in a ten-year old car. If this type of car is your thing, then this is certainly now the one to go for in the segment.