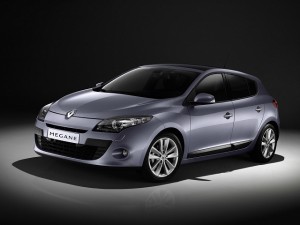 The Megane has done really well because Renault in Ireland has become probably the most aggressive car firm in the land, with its assault on the Irish market through scrappage deals and impressive discounts. The Megane has, in 2010, become an irresistible choice for buyers for various reasons, not only on price. The 1.5-litre diesel engines, which bring with them low emissions and cheap running costs can be also pointed to as reasons for the car's impressive sales.

The choice with the Megane is between three very different cars. The three-door Megane is referred to as a Coupé and it is without doubt one of the prettiest looking cars in the segment. Obviously by the nature of its dimensions there really isn't a lot of rear space but it does look superb. The more sober side of the Megane family are the five-door hatchback and estate models.

The five-door hatchback is less adventurous in design but is still a reasonably pretty car. The Megane hatch and Grand Megane offer much more space but still come with the 1.5-litre dCi diesel at the very heart of the range. Of the three, the Coupé has by far the most kerb appeal but practically speaking we really like the Grand Megane because it offers a nice blend of styling and practicality.

The old Megane had a hump - well a rump - and much was made of it literally and in the advertising sense; it was all about the ass. Odd then that the new Megane has had a serious nip and tuck in that department and boasts no such J-Lo styling appendage. Instead it's the other end that has taken up the task of injecting some flair into the car's appearance, with a heavily shaped snout that features a two-tier bonnet that rises in a step from the bulge of the wheelarch to a plateau bracketed by Renault's trademark headlight treatment. This, along with the steeply raking roof line that lends it a rakish profile - even in five-door form - ensures that the Megane stands out.

Inside there's a step change improvement in quality, look and feel relative to the old car and an air of solidity that has been sorely missing in comparison to the VW benchmark. It is marred by a couple of lapses that detract from the overall package, most annoyingly the digital dash and instruments - they look at odds with the rest of the interior and are - in our opinion - an ill-advised departure from traditional dials.

You really get a lot for your money with the Megane, especially at the moment, where Renault is offering very considerable discounts on this model, not only for those who are scrapping cars, but also for non-scrappage customers. These discounts aside, which vary, even the most basic cars are very well equipped with all models getting air conditioning as standard. There are three specifications in the Megane: Royale, Dynamique and TomTom edition. The Royale gets steel wheels and ESP as an option, while the Dynamique adds alloy wheels and ESP among other items and the TomTom edition adds an excellent built in TomTom satnav system and the ability to play your iPhone music through the Bluetooth.

There is a 1.6-litre petrol model available but only a handful of these have been sold compared to the diesel models, which are in the overwhelming majority. The 1.5-litre dCi is the best-seller, with a choice of two outputs available, at 86- and 106bhp. The 86bhp version is no rocket but it does serve a purpose in offering low emissions and cheap running costs. The 106bhp has longer legs and will suit those who commute bigger distances, although it is only available as a higher cost TomTom edition - yet even the higher power 106bhp version is still in motor tax band A, with road tax of just €104 per year.

The Megane finds itself in a no-man's land offering a compromised and firm ride but somehow failing to provide the customary and expected handling benefits. All who rode in the Megane commented on the hard ride; none on its handling prowess. Ford's Focus (most notably, but other rivals too) offers both superior compliance and entertainment. Given Renault's aptitude for producing hot hatches with benchmark damping it's an irony that its bread and butter models miss the target by such a wide margin. However, while the Megane continues to be offered at such a low price, we would expect few people to care.

The Megane is available under the current scrappage scheme from as little as €14,800.

Renault has moved the game on massively in a number of areas with its latest models. They are much more rounded offerings and the Megane does close the gap to class leaders in terms of quality, accommodation and value. However, dynamically it falls well short of class honours and is no more than average. In summary, the Megane is perfectly capable, but it lacks flair.