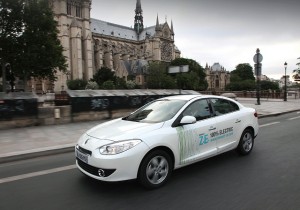 This First Drive comes with a disclaimer, in that the car driven is a hand-built pre-production example of the 2011 Renault Fluence Z.E. Time spent in the car on the road was short and the story is more about the arrival of such electric cars rather than how this particular example performs. Keep all that in mind as you read on.

Thanks in no small part to Renault's generous scrappage deals, the four-door Fluence is no stranger to Irish roads. Over eight hundred examples have found homes so far this year. The electric version tested looks little different. If it were not for the '100% Electric' decals adorning the sides nobody would take any notice of the white saloon. The final production version will look a little different, in that it'll be a bit longer. That's to accommodate the battery pack without compromising on boot space.

Inside, the pre-production car looks much the same as any other Fluence, though if you look closer you'll see that the instruments are changed - and of course there's what looks like an automatic gear shifter in between the seats.

Renault has not released the price for the Fluence Z.E. as yet, which is unsurprising given that it'll not go on sale until the end of 2011. However, it has been stated that the Z.E. model will cost virtually the same as a diesel version. The current 1.5 dCi Fluence costs from €20,300 - €23,500 for reference.

It's likely that the price of the Z.E. will not include the battery pack. That will cost about €100 a month to lease. At first that may sound a little miserly, but Renault puts forward a persuasive argument for this set-up. Theoretically the car owner would always have access to the latest battery technology and they are not responsible for disposing of the old one. Along with that, this arrangement opens up the possibility of battery swap stations, where the driver pulls in and a depleted battery is replaced with a fully charged one - in no longer than it takes to fill a fuel tank up.

Renault estimates that the overall running costs of the Fluence Z.E. are just a fifth of those of a conventional model and that the break-even point is just 10,000 kilometres per year.

As with all electric cars, driving the Renault Fluence Z.E. is simplicity itself. Press the start button and the instruments come to life. Move the gear lever to D and the merest brush of the accelerator pedal is all it takes to sharply take off. It's actually quite easy to spin the front wheels thanks to the instantaneous availability of the electric motor's maximum torque.

Engineers have their work cut out to reduce road noise in electric cars, as the lack of any engine noise brings it into focus, especially at higher speeds. We'll give Renault the benefit of the doubt with this car as it's not the final thing. Same with the set-up of the chassis.

That aside, the Fluence Z.E. feels quick and pleasant to drive, if a little more detached from the road than a conventional car would be.

The Fluence Z.E. will be beaten to the Irish market by the Renault Kangoo Z.E, a light commercial vehicle. A few examples of the Fluence will hit our roads by the end of 2011, but public sales probably won't start until early 2012. Renault is hoping that buyers will be taking the electric car very seriously by then and that they'll cash in on the Government's €5,000 incentive.

There's nothing groundbreaking about the Renault Fluence Z.E, but it represents a possible shift change in the cars we buy and drive. It's encouraging that it remains so similar to the conventional model, as buyers have enough to contend with in getting used to the idea of electric cars. Perhaps one of the most interesting aspects of it is the idea of battery swap stations. Whether that becomes a reality in Ireland has yet to be seen.