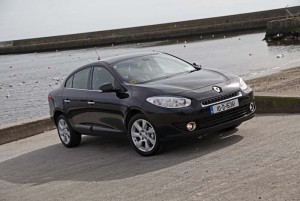 The Fluence was a welcome sight at Dublin Airport on Friday night. Tired from a week of airports and travelling the Fluence would provide my long awaited transport home. And Renault had thankfully given us the full bells and whistles TomTom version.

We have the 1.5-litre 106hp dCi model that costs €23,500. Though with scrappage allowances you can have this version for €19,000. But if you are prepared to drive a more basic model with less horsepower you can pay just €15,800 for a Fluence under the scrappage scheme.

The Fluence isn't sold in every market; Renault UK for example doesn't offer the car, but our fondness for saloon cars and Renault Ireland's aggressive marketing means that this is seen as an ideal car for the Irish market.

The TomTom system, which is built into this car, works really well and comes with a remote control that is great. Until it gets lost, which is highly probable.

A drive on a blistering hot Saturday morning tested the Fluence's climate control, which works incredibly well. It really gets freezing in there. This feels like quite a large car, way bigger than its price tag would suggest. Space is generous in the front and rear and there is an enormous boot too.

As well as the climate control, there are plenty of other toys thrown in. You get cruise control and speed limiter and there is also somewhere to attach MP3 players, but annoyingly it isn't a standard USB dock or auxiliary input. You also get Bluetooth hands-free though and this will play music through your iPhone - if you have one of those.

Our top spec model also came with half leather upholstery. Under the bonnet is the more powerful of the diesel engines available here in Ireland, the 106hp 1.5-litre dCi, which despite the extra grunt compared to the lowly 86hp version, still manages to reside in motor tax band A. Even with the increase in power, this version is still no rocket: 0-100km/h takes 10.4 seconds and the top speed is 185km/h, but it is more than capable of holding its own on the motorway.

There definitely are drawbacks to the Fluence. For a start it feels very soft; and while that means it is comfortable on the motorway, it doesn't feel as composed as some of its key rivals through bends. There is a long and lazy clutch and this can take a while to get used to and neither the steering nor the gearbox feel quite as slick as something like a Ford Focus or Mazda3 saloon.

However, you just need to keep reminding yourself of what you are getting for the money and you tend to forget all that. Even without the discounting, which applies more so to scrappage customers than everyone else, you are getting so much car for the money. We parked the Fluence outside a busy restaurant today and it got lots of admiring glances.

It looks like a generously sized car and with this level of equipment it is going to be irresistible. Given the massive jump in sales for Renault this year in Ireland and the success of the Mégane, it is hard not to see this Fluence selling well. It is better looking to our eyes than the equivalent Ford Focus, and cheaper than it and rivals such as the Mazda3.

If you are after a large, comfortable saloon that is thankfully blessed with equipment and will cost very little to run, then this is certainly well worth a look.