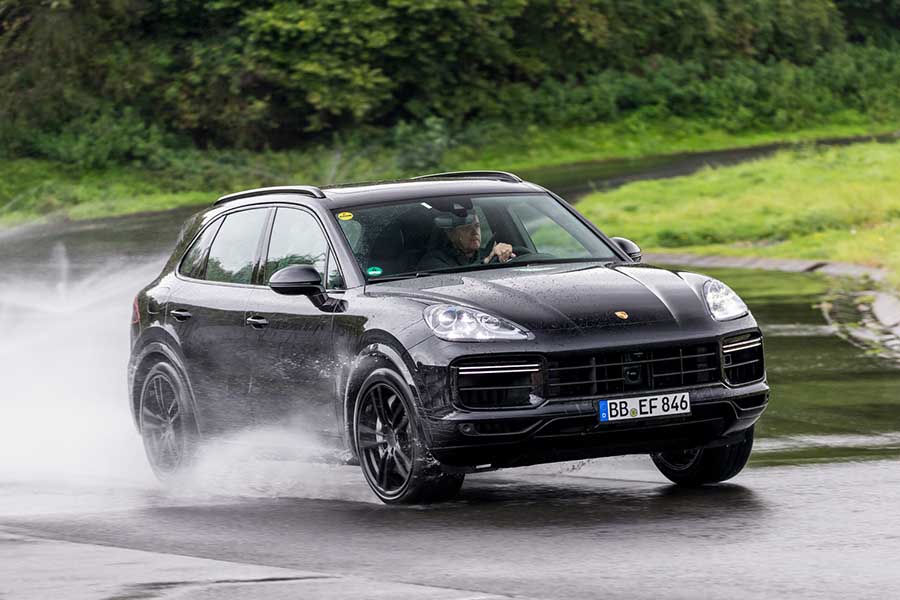 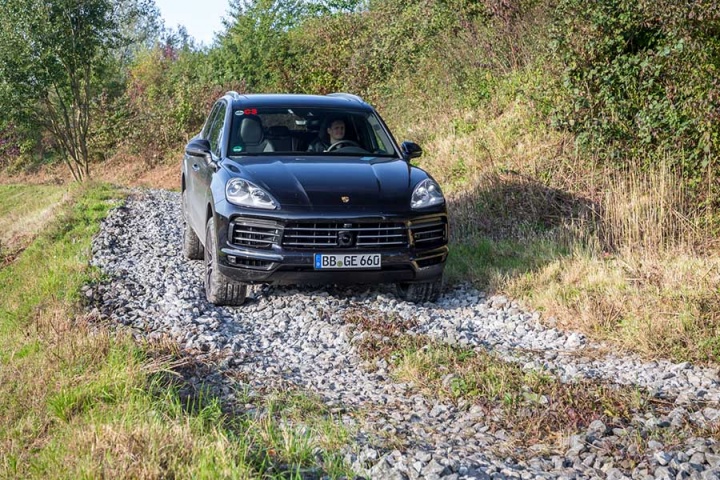 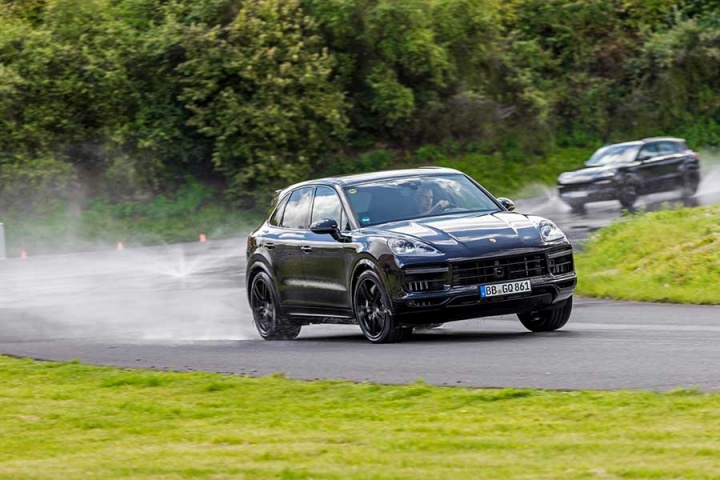 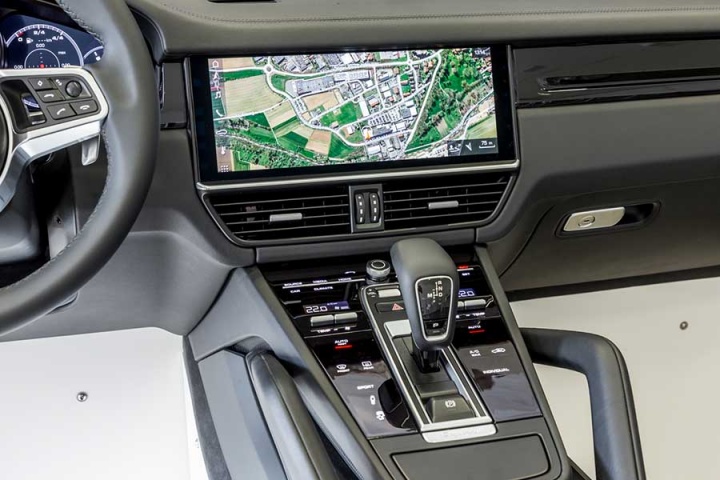 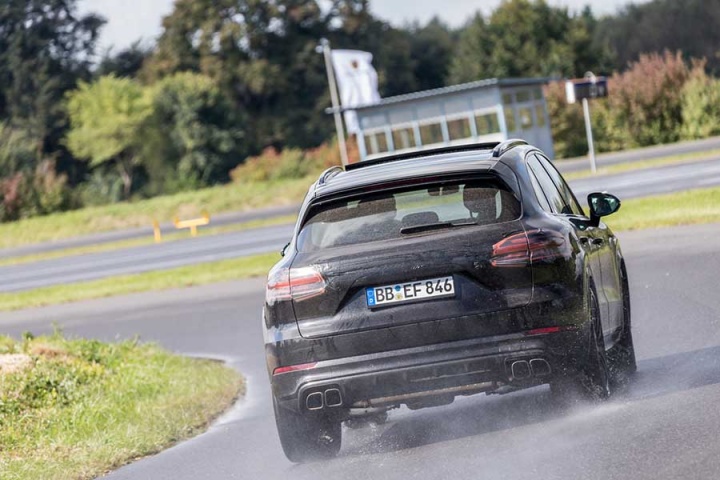 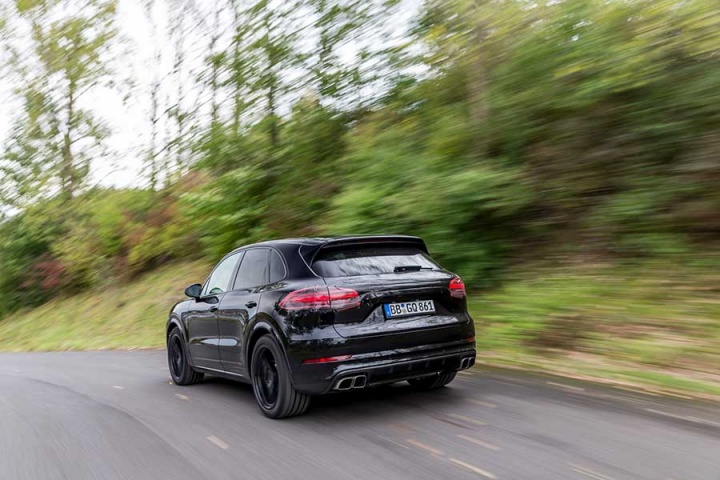 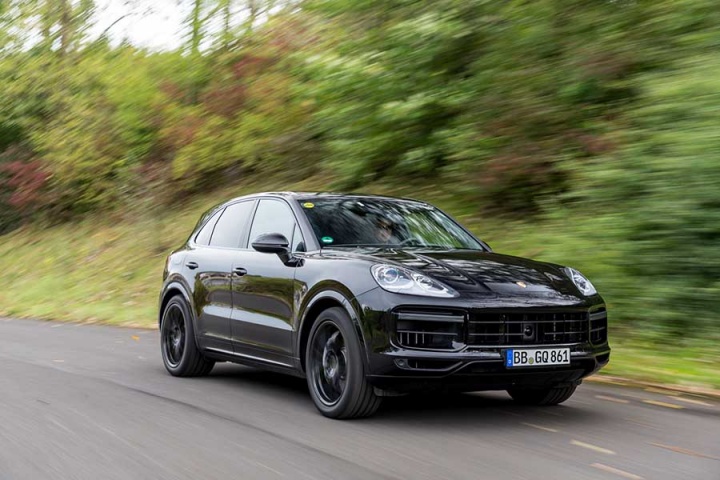 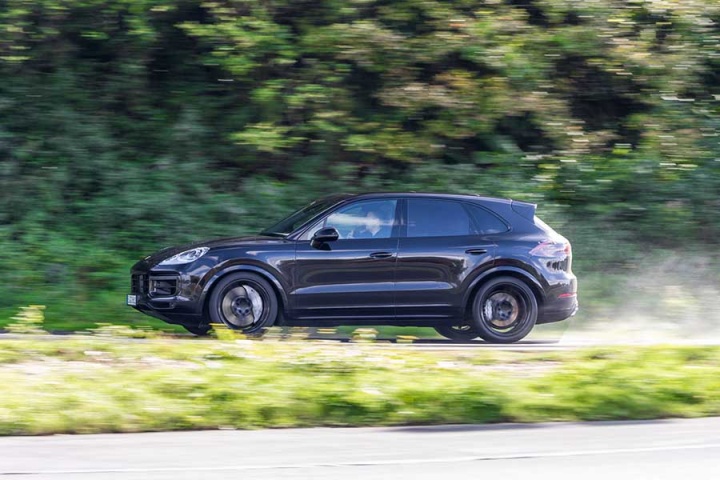 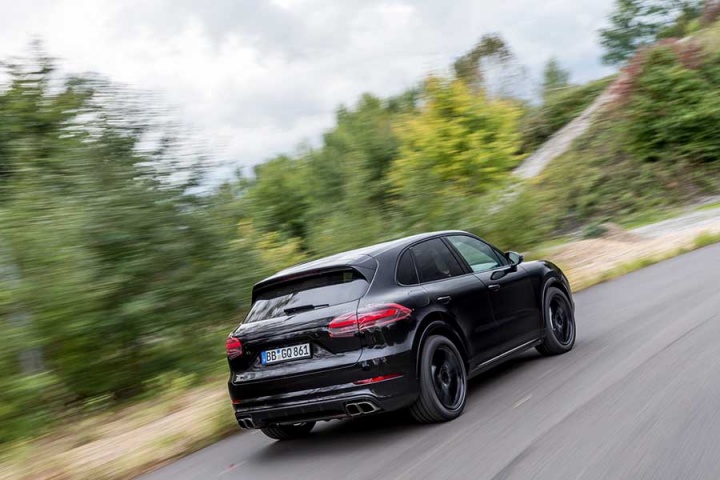 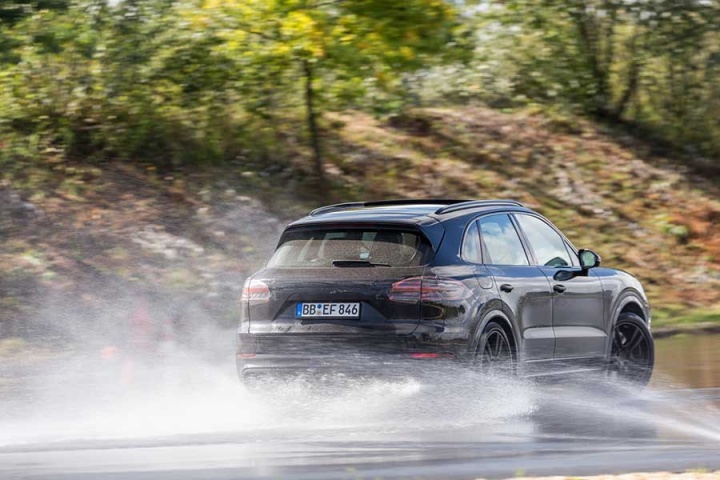 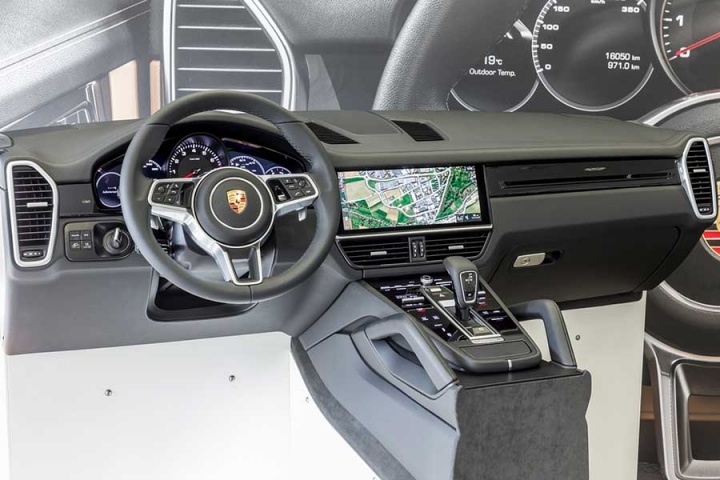 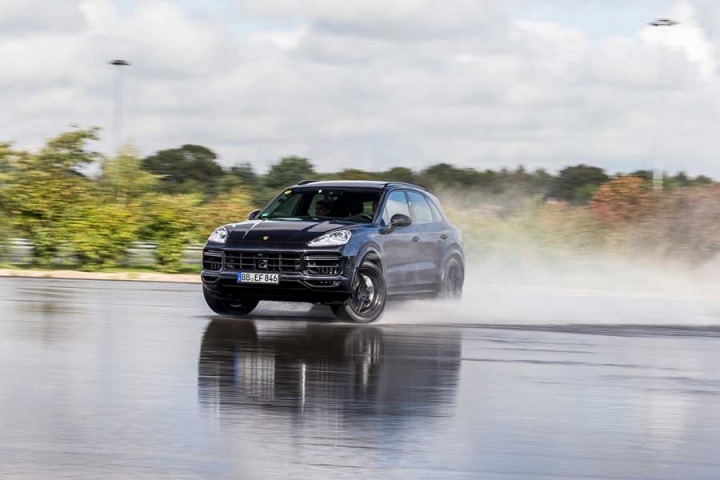 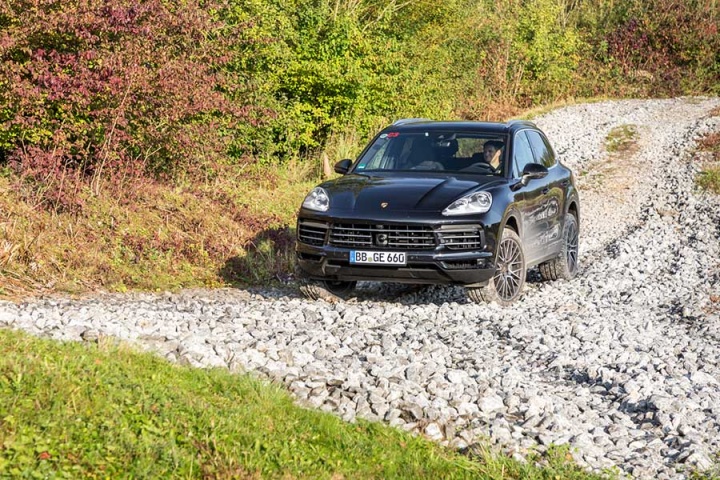 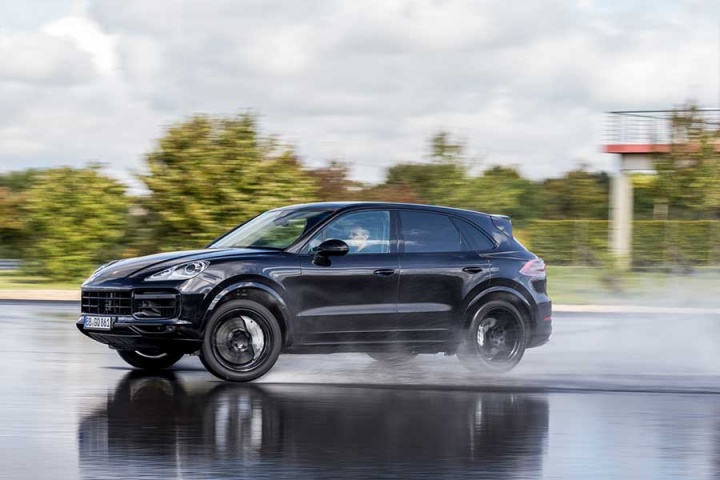 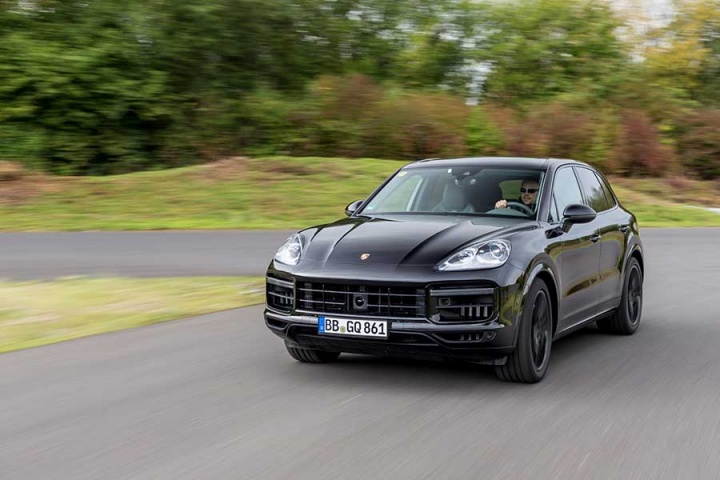 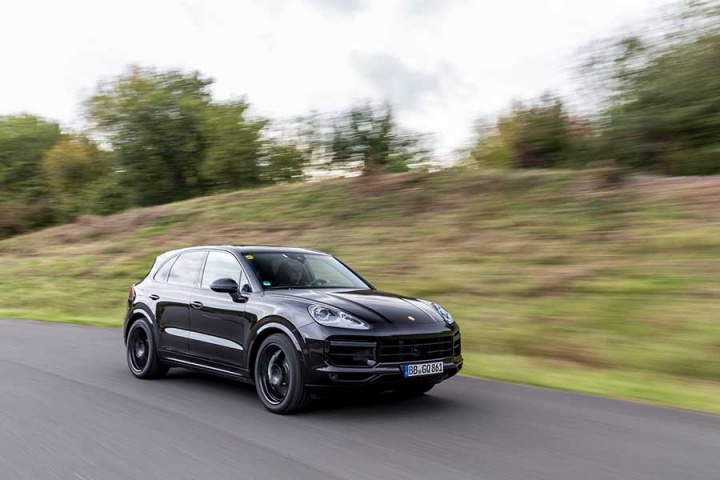 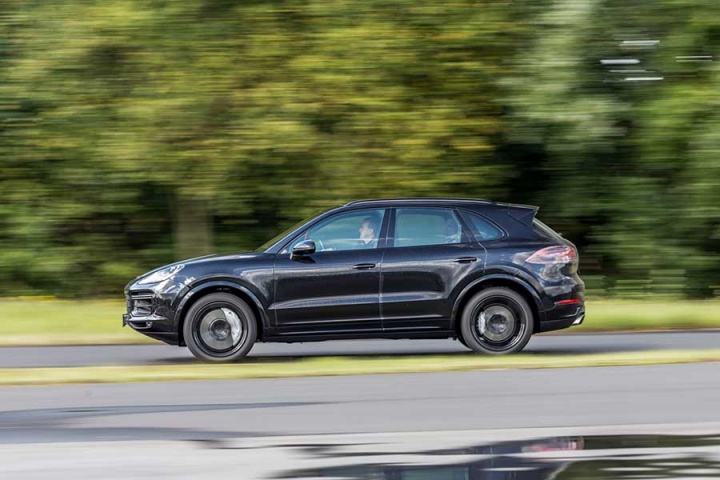 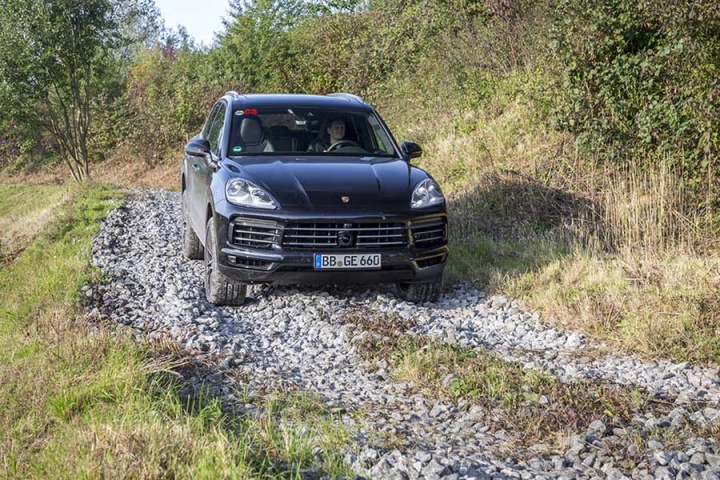 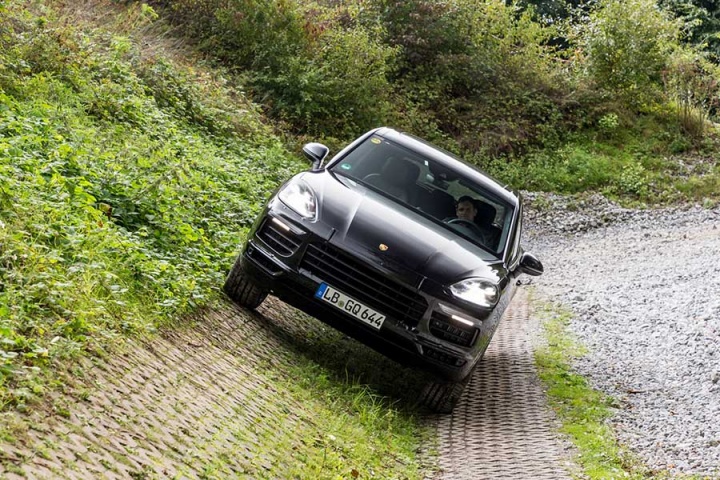 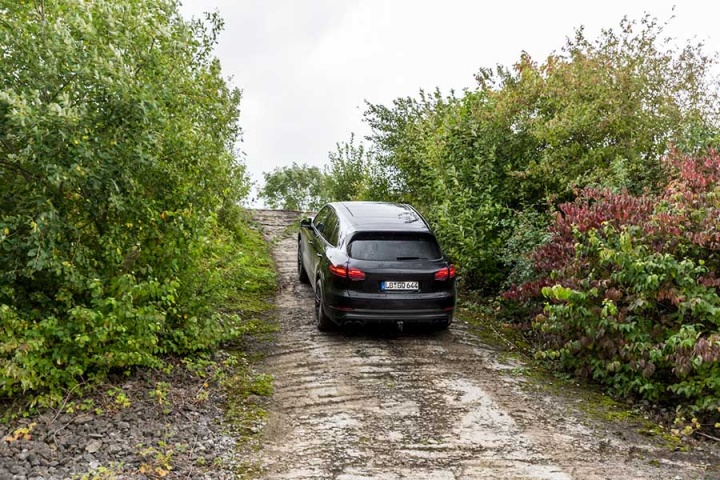 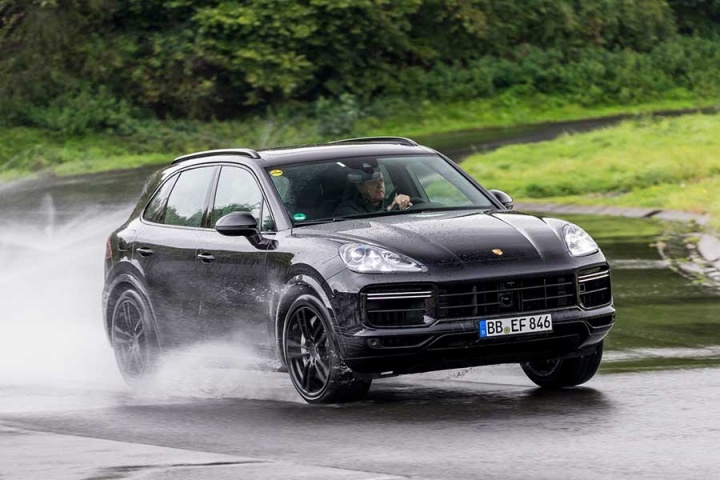 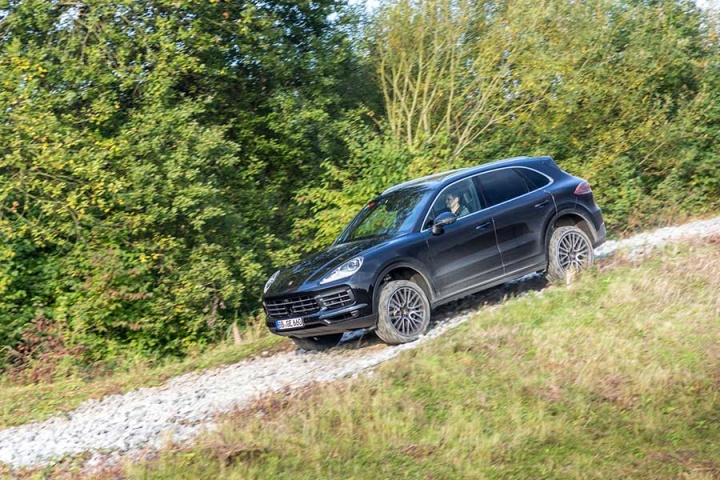 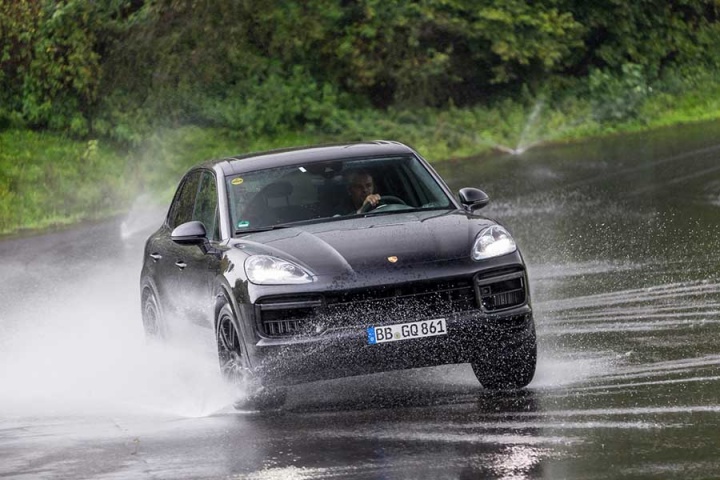 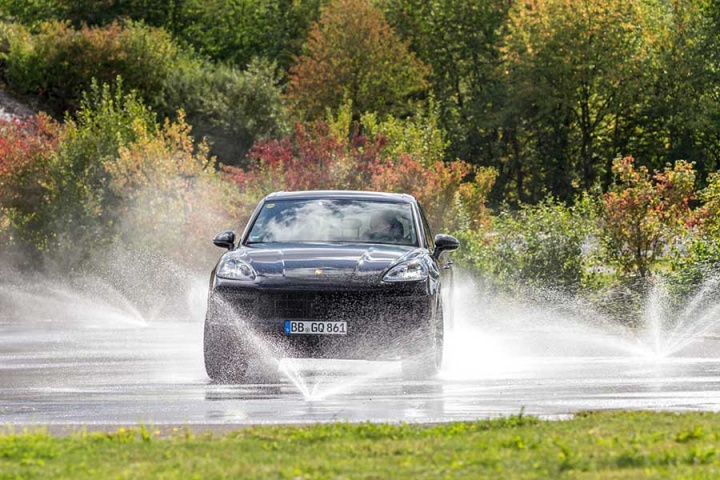 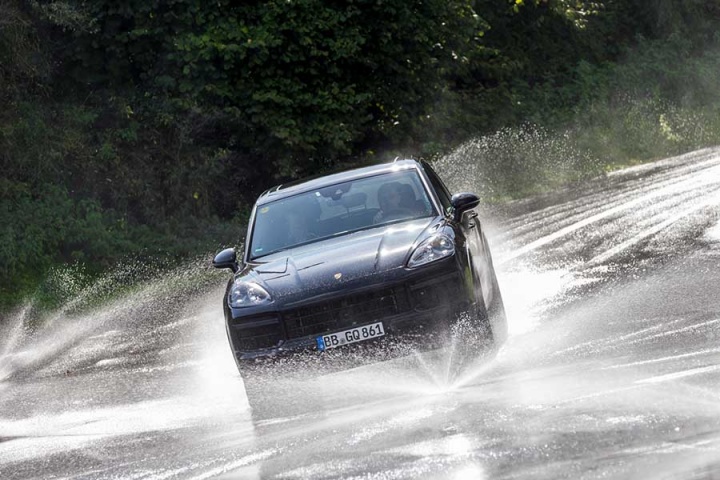 The new 2018 Porsche Cayenne Turbo is one of the most technologically advanced SUVs on the market; we go for an early ride in one.

It seems strange to think that when the Porsche Cayenne first appeared in 2002, people thought Porsche had lost it. More than a decade previously, Ferry Porsche said in an interview that “If we built an off-road vehicle according to our standards of quality, and it had a Porsche crest on the front, people would buy it.” He wasn’t wrong. That first generation would go on to sell more than 270,000 units, and proving it wasn’t just a one-hit wonder, the second-gen found more than 500,000 homes. Now it’s time for the Cayenne’s difficult third album. Porsche is no longer the only sports car maker producing an SUV. Between the Maserati Levante, BMW X5M, not to mention the plethora of Mercedes-AMG badged high-riding 4x4s, the lofty Porsche has more competition than ever before from inside and outside the Volkswagen Group.

When introducing the new Cayenne, Dr Michael Steiner, Porsche’s Member of the Board of Management responsible for Research and Development claimed, “only the crest is carried over”. In comparison to its predecessor, it measures in 63mm longer, 23mm wider and 9mm lower. Boot space is up 100 litres, and most notably, the running gear has been completely overhauled. Wheel sizes are up an inch on the front, and the rear tyres now get a 25mm wider section, with more powerful models gaining 30mm increases. This gives you an indication as to how Porsche’s engineers have divided the power distribution in the all-wheel drive transmission.

Overall weight has come down to 1,985kg on the base Cayenne, down some 55kg when you compare it to the first-generation, which tipped the scales at 2,170kg. Fitment of a lithium-ion battery in the Cayenne Turbo saves an additional 10kg in weight. This achievement is all the more impressive when you factor in the performance gains, the increase in on-board technology and the even more stringent safety requirements needed today versus 2002.

Indeed, Rudiger Jahn, who led the development team for the body structure revealed that the Cayenne had to be designed to contend with 80 different crash tests globally. While the basic body is now 22kg lighter than before, that includes 50kg of weight that is purely down to the engineering required for the overlap crash test in the United States. Paint adds a further 10kg to the overall weight, too.

The body uses significantly more aluminium in its construction now. Previously, this material was used in the bonnet and tailgate, but now it features throughout the shell and in the majority of sheet metal, including the entire side panels. These complex pieces are produced by one of Porsche’s technical partners in Saxony, and building the tooling to make the panels alone took 14 months. The cost of producing the bare bodyshell is now 80 per cent more expensive than the previous generation. All of the hang-on parts - doors, bonnet, wings and tailgate - bring a combined weight saving of 13.5kg. The new-found lightness is joined by a 20 per cent increase in body rigidity. This improvement comes partly from the 6,800 or so joining points that are completed by 680 robots. Previously, Porsche used just 99 robots in the Cayenne’s construction.

One of the other areas of improvement is the Cayenne’s aerodynamics. Its large front grille houses adaptive flaps for the radiators behind, which can open or close according to the vehicle’s cooling requirements. They remain shut on startup to help get the engine up to temperature faster. The flaps on either side below the headlights are upright. By opening vertically, they can open less (just 45 degrees) and take advantage of the airflow as it goes around the front of the car before exiting through the wheelarch.

On the Cayenne Turbo, the new Porsche Adaptive Aerodynamics (PAA) features a rear wing that can deploy to different angles according to speed and driving conditions. In Eco mode, and below 160km/h it remains closed to optimise airflow. Over 160km/h it rises by 20mm to add downforce over the rear axle. If you have the panorama sunroof open, the wing will raise its angle of attack to 60mm to compensate for the disrupted airflow. Smart thinking. With Sport Plus engaged the wing sits up by 40mm, and then it lowers slightly as speed increases above 200km/h, as long as the car is tracking straight. The wing can also act as an airbrake during emergency braking moments starting above 170km/h. In this instance, the wing flips to its most upright position, 80mm of attack, in just nine-tenths of a second. Porsche’s most experienced aerodynamicist, Dr Thomas Wolf, explained that at a speed of 250km/h this airbrake can reduce stopping distances by an additional two metres. It seems small, but this could make all the difference in an emergency situation.

Giving the Cayenne the capability to reach those speeds in the first place is a new range of engines. The lineup starts off with a single-turbocharged 3.0-litre V6 delivering 340hp and 450Nm of torque. With the Cayenne S, the engine has a slightly smaller 2.9-litre displacement but gains a second turbocharger. Both of these sit in the middle of the cylinder banks. Doing so makes for a more compact design but improves engine response as the exhaust paths between the combustion chambers and turbochargers is shortened. The 2.9-litre lump churns out 440hp and 550Nm - pretty decent numbers for a five-seat SUV.

But then we come to the Cayenne Turbo we’re having a ride in here, and its 4.0-litre twin-turbocharged V8. The rumble as we pull away with Porsche Test Driver, Thomas Reithmuller at the wheel, is deep. Our car wears a very light disguise around its corners and headlights, and the badging on the boot is taped over to signify that this isn’t yet a production-ready vehicle. Reithmuller adds that this car has only a thousand or so kilometres on the clock and will go back to Porsche’s engineering team next week to be examined. He says this while calmly barrelling towards the first corner on the test track on the outskirts of Düsseldorf. A slight dab of the brakes and he swings left with no hint of body roll.

The reason for this unusual sensation is the deployment of a new 48-volt system for controlling the anti-roll bars on both axles, allowing for active stabilisation of the body. It eliminates any semblance of body roll while generating up to 0.8G of lateral acceleration with two occupants on board. As we flick through some tighter corners, the rate at which the Porsche can change direction becomes increasingly apparent. Its optional rear-axle steering can turn the rear wheels in the opposite direction to the fronts at up to 80km/h and can shave more than half a metre off the turning circle. At higher speeds, on a motorway, for example, the rear wheels will turn slightly in the same direction of the fronts, allowing for greater precision when switching lanes.

Getting back to that stonking engine for a moment, and it’s amazing just how quickly it flings the Cayenne Turbo out of slow-speed corners. There is no apparent sense of turbo lag from the engine, and its responsiveness seems finely tuned. Add the Sport Chromo Package and the 0-100km/h time falls to 3.9 seconds. For some perspective, the 996-era 911 Turbo couldn’t crack the four-second barrier.

Exiting a faster bend through the wet section of the track, Thomas is able to demonstrate the rear bias of the Cayenne’s all-wheel drive system. The argument for it is solid as we build up more speed through the bend while I’m looking out of the side window in our direction of travel.

Dropping anchor in the Cayenne Turbo gives us our first opportunity to experience Porsche’s new Surface Coated Brakes, or PSCB. Coming as standard on the Turbo and available as an option on the Cayenne and Cayenne S, this new braking system slots in beneath the more expensive carbon-ceramic discs. The headline figures include a 90 per cent reduction in brake dust during use, which is why these will be recognisable by their striking white painted calipers.

Just as eye-catching is the unique finish to the discs. The 415mm front and 365mm rear rotors are formed in the same way as conventional grey cast discs before being roughened on the surface. The discs then get a galvanized layer to optimise adhesion before a tungsten carbide coating is added. This measures just 100 microns thick, yet is as hard as a diamond. Combined with specially developed pads, these can withstand brake fade as disc temperatures increase through repeated braking manoeuvres. After around 600 kilometres of daily driving, the discs do develop a highly polished finish that is enough for you to be able to see your reflection in and check your hair if you needed to.

While we’re under no question as to the high-speed capabilities of the new Cayenne, it’s easy to forget that despite its bahnstorming nature, it’s also a car that can venture off the beaten track. It is capable of tackling 45-degree angles both head-on and on the side. The Porsche Traction Management (PTM) system can fully vary the distribution of drive between the axles to give continued uninterrupted propulsion at all times. While few owners are ever likely to attempt such driving, it’s reassuring to know that the Cayenne can do it.

Be in no uncertainty as to the new Cayenne’s performance abilities. It’s a technical tour de force and demonstrates Porsche’s ability to not only built great sports cars, but equally impressive SUVs. We look forward to getting behind the wheel in the near future.