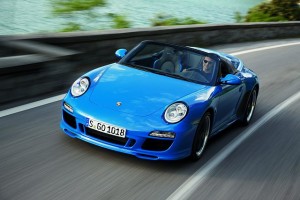 Need somewhere to put your money other than our banks? How about the new limited edition 911 Speedster?

The new Speedster is the most unusual looking Porsche 911 there is, mixing the wide rear bodywork of a Carrera 4 Cabriolet with a unique double-bubble aluminium hood cover that reaches to the rear of the front seats. It looks better in reality than it does in the photographs, but even so the 911 Speedster's look is one that takes some getting used to.

The 60mm shorter windscreen, the proximity of the bodywork behind you and the leather-lined interior do make it feel more special than a regular 911 Cabriolet, even if the blue highlighting inside could be a little over the top for some. This is a Speedster, and you wouldn't buy such an exclusive 911 if you didn't want to attract some attention.

The cabin is absolutely smothered in leather, Porsche's Exclusive division going so far as trimming the air vents and door pulls with cow hide. But then it should be well equipped and finely trimmed, it'll cost an Irish buyer not far off €300,000. The generous specification is rather at odds with the pared-back idea of original Porsche Speedster models.

Sharing its engine with the new 911 Carrera GTS, the Speedster's performance is beautifully crisp and linear. The combination of no roof and a loud sports exhaust adds significantly to the aural appeal. It feels quick, with the easy PDK paddle-shifter and the ample power meaning a 0-100km/h time of just 4.4 seconds.

The suspension is taut and combined with the massively wide rubber the Speedster does feel a bit busy on rough surfaces, but it's not uncomfortable. The steering has plenty of weight, yet it lacks the fine communication of the 911 GTS coup?. The brakes are strong, but the Speedster doesn't have the intimacy and feedback of the GTS or the similarly limited edition Sport Classic - it's not far off though. Despite this we suspect that most of the 356 owners will never have it out of Drive - or be testing the fade-free PCCB brake discs.

Where it does appeal is its uniqueness. Knowing you're driving a car that's built in such tiny numbers isn't without its draw. Our drive was short, but it felt special. Which is all that'll to matter to Speedster buyers, especially as they're likely to have a number of other Porsches and sports cars to choose from when the mood takes them.

The Speedster's roof is more weather-tight than its predecessors' but be prepared to spend some time raising it if you're caught out by a quick rain shower.

Only two colours are offered, so if you want your Speedster in anything but the blue pictured (or white) then you're out of luck.

It arguably is not quite as pretty as its predecessors and it trades the lighter, simpler, faster ethos for limited-edition, high specification exclusivity but there's no denying that the new 911 Speedster has some appeal. Whether it's worth the price of a 911 GT3 and Boxster Spyder together is an interesting question - but one that no owner will ever have to ask themselves.