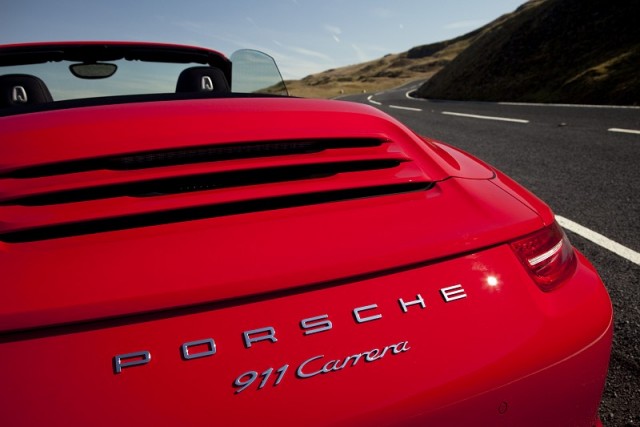 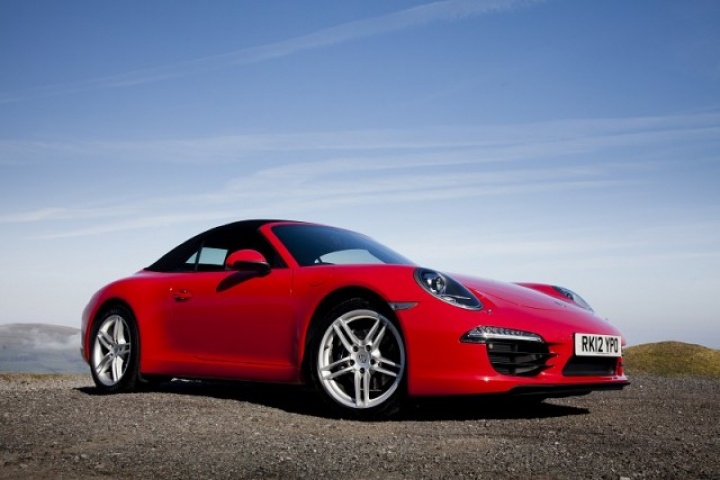 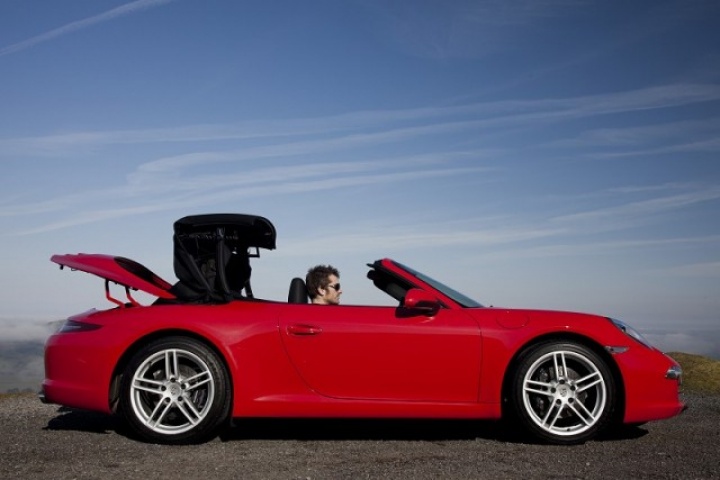 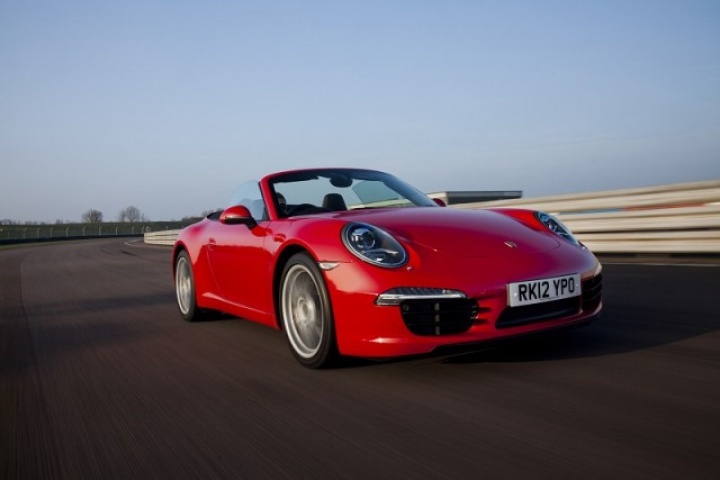 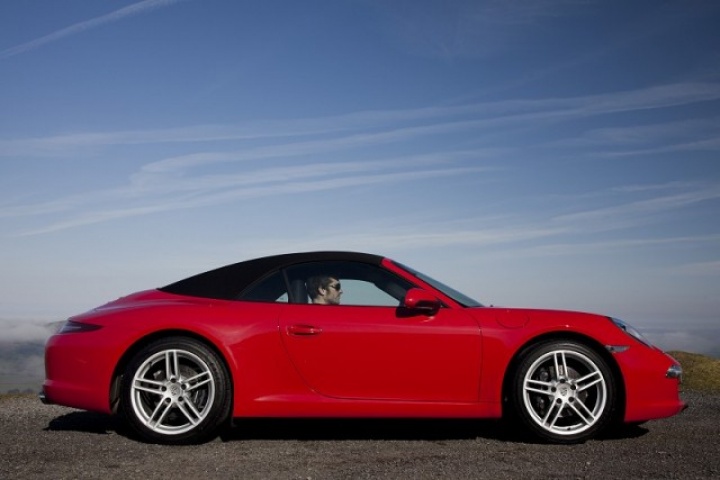 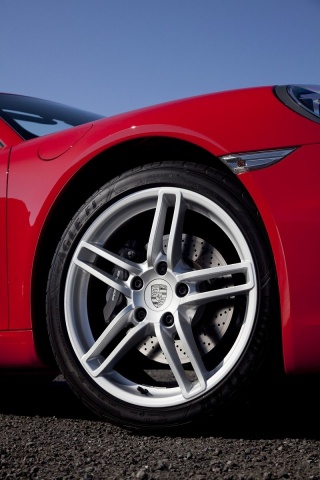 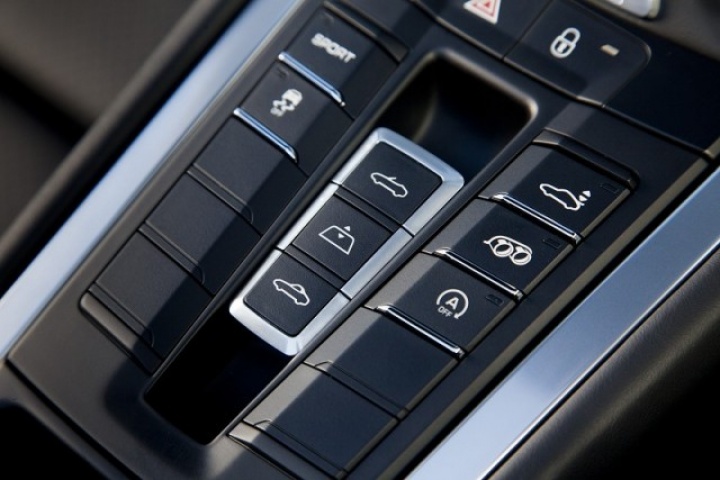 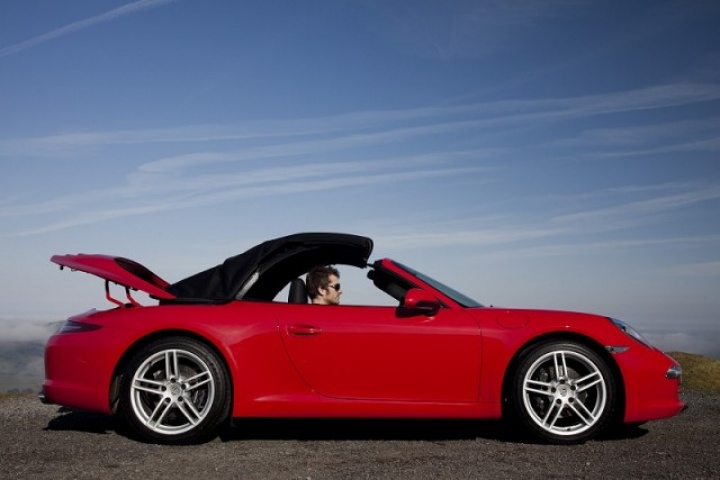 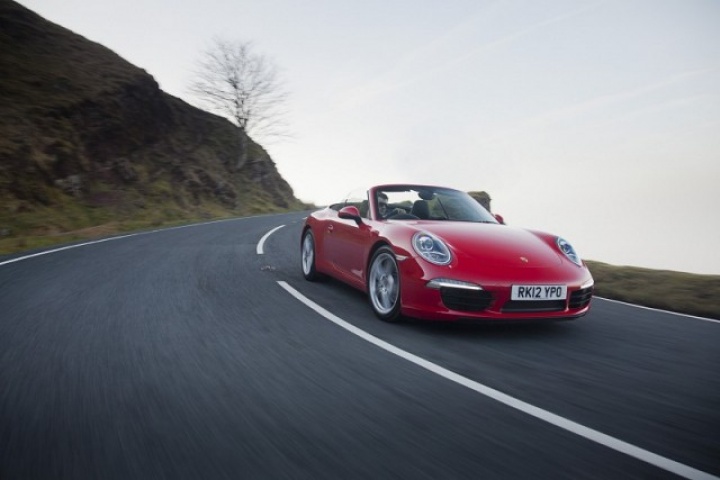 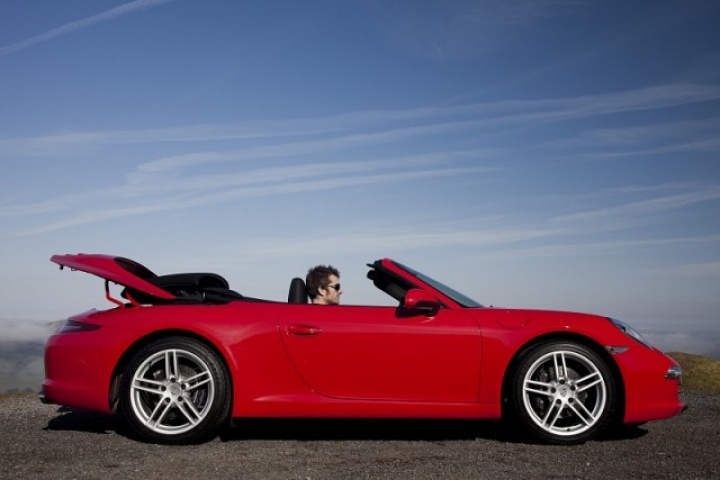 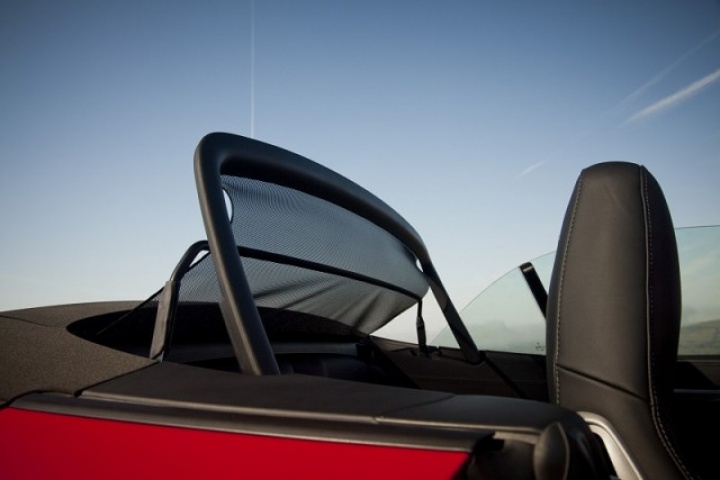 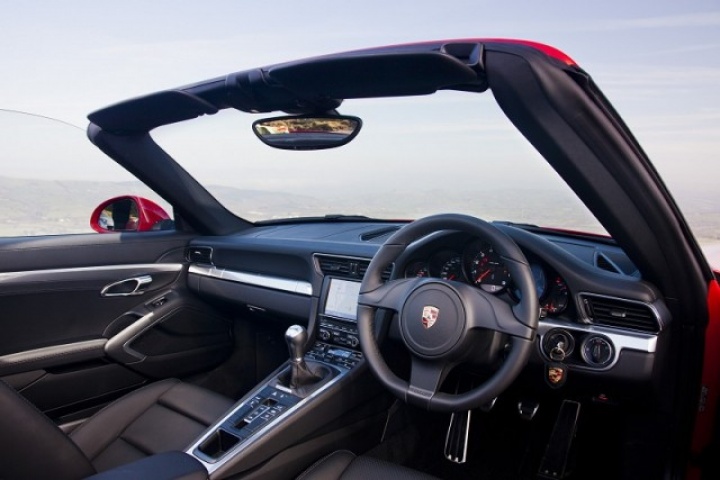 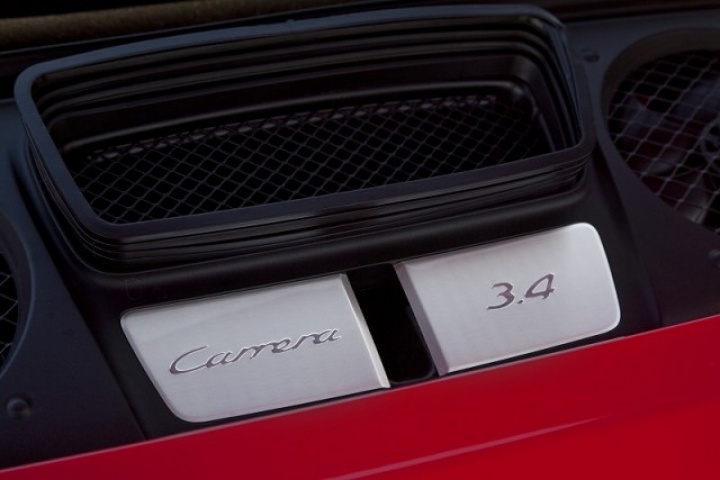 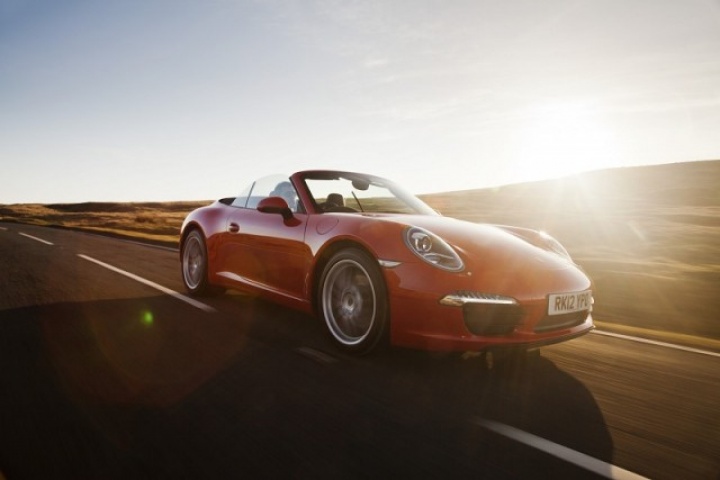 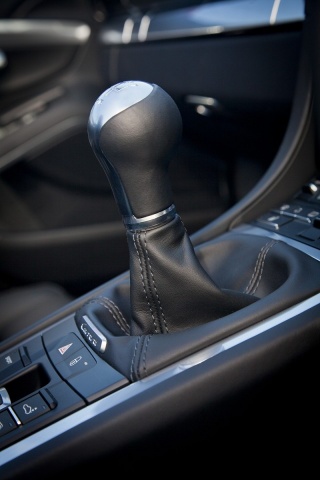 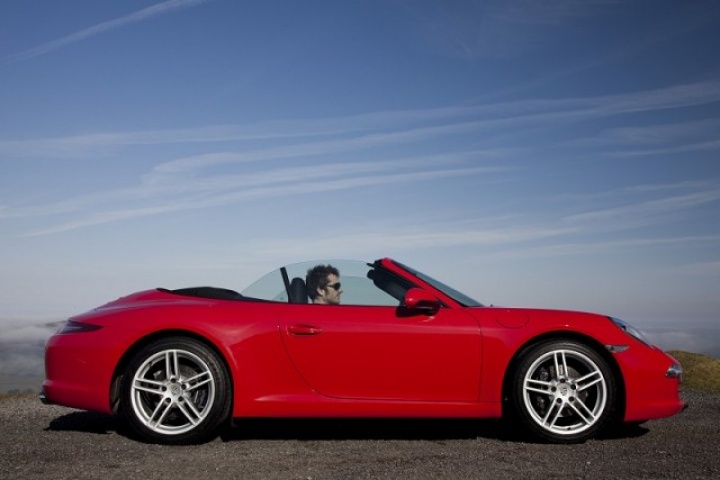 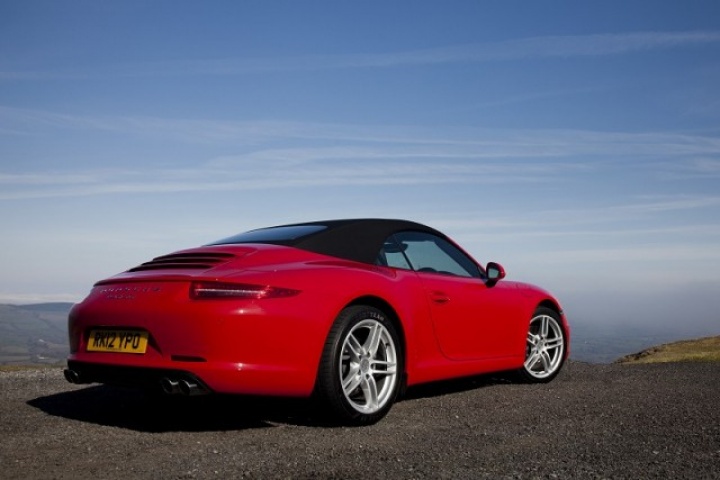 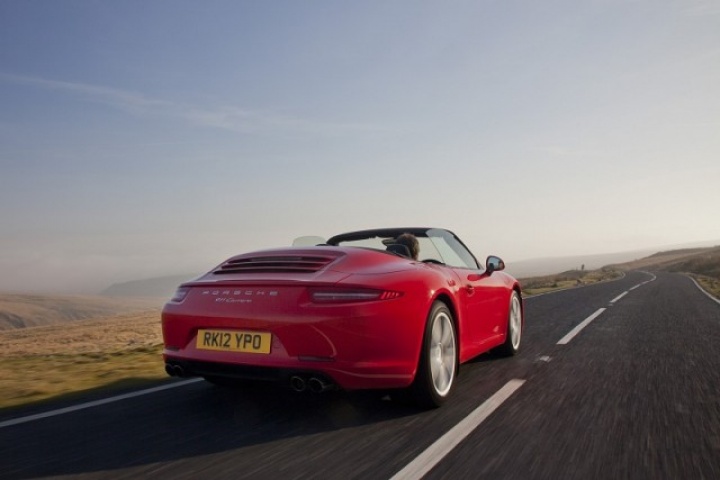 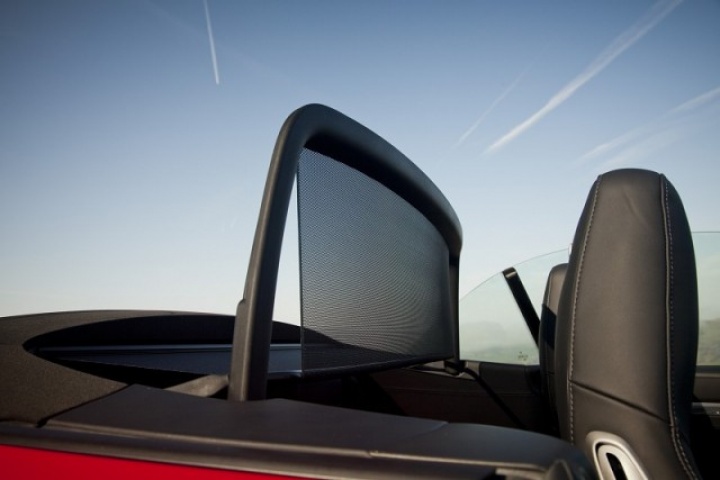 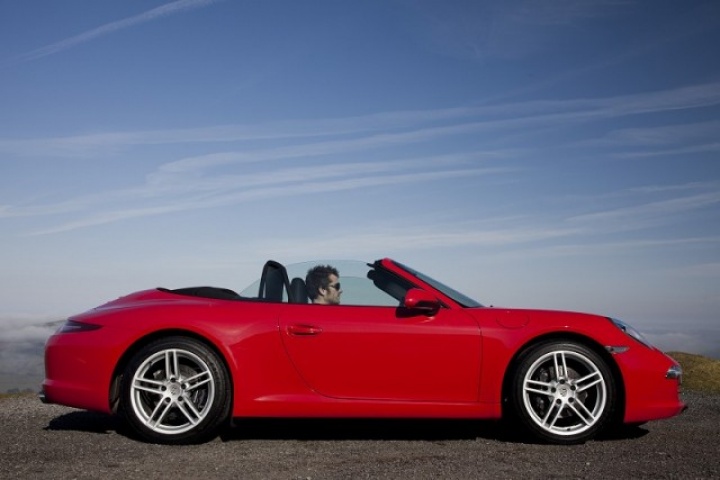 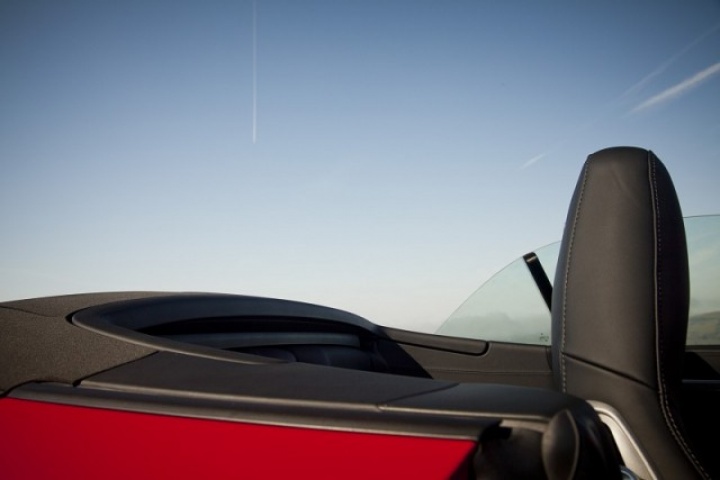 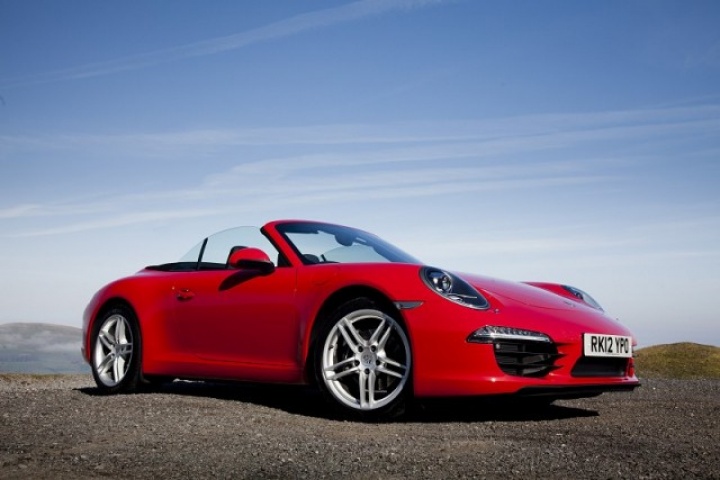 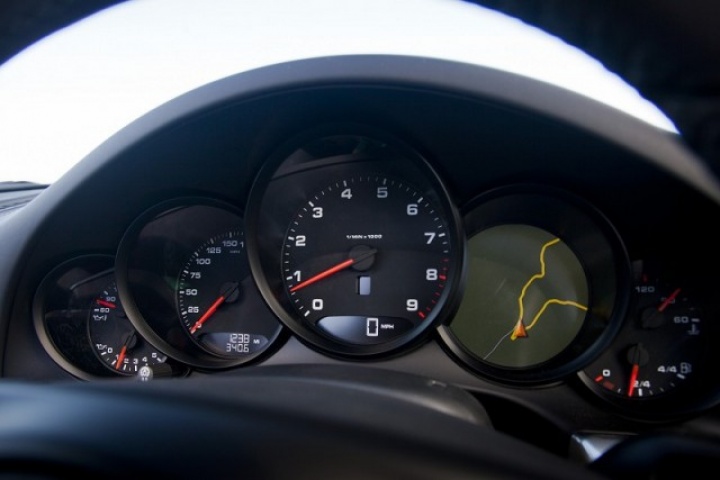 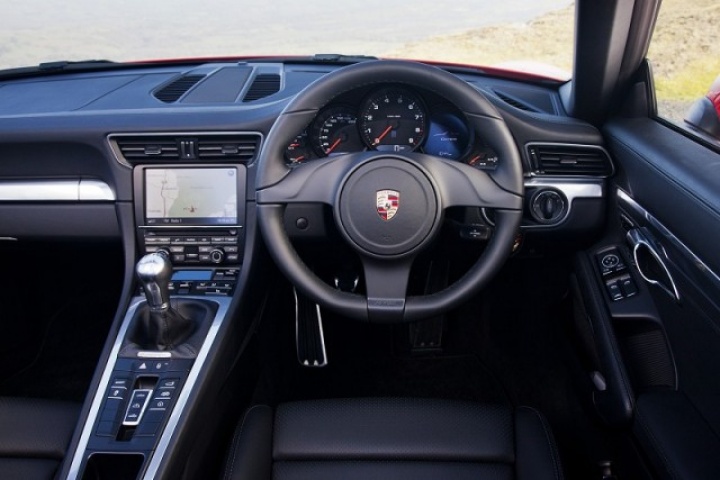 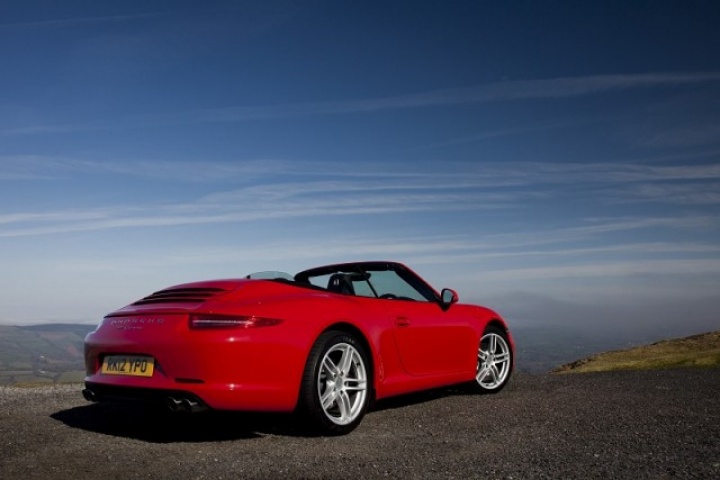 Porsche's new 911 drops its top to become the Cabriolet.

Porsche drops the roof on its 911 to create the Cabriolet, sampled here in standard Carrera 3.4-litre guise. If you want an open-topped all-rounder there's little better.

The 991-series Porsche 911 might be an all-new car, but the styling remains as familiar as ever. The raised front wings, wide rear haunches and that classic roofline are 911 signatures, while Porsche claims that this Cabriolet version shares its profile with the coupé. A very slight kink where the roof meets the bodywork betrays that, but it's a neatly integrated roof regardless - which folds away at the touch of a button at speeds of up to 50km/h.

Roof down the buffeting is less than its predecessor thanks to a pop-up wind deflector, the cabin of the 911 now befitting its list price. Again there's nothing revolutionary inside, but the fit, finish and materials all feel of a better quality than the 991's predecessor, the 997 model.

If the sports exhaust option is a desirable addition to the 911 coupé then it's a must for the Cabriolet. Get in, start up, press it and enjoy the amusingly assertive noise emanating from behind you. Even in entry-level 3.4-litre Carrera guise the 911 sounds fantastic. The Cabriolet gains here significantly over its coupé relative, as even with the roof up there's more aural enjoyment to be had, be it the intake sound or that rasping, popping exhaust.

It doesn't just sound good though, as the Carrera is no poor relation to its Carrera S relative on the road. Down 50hp and 50Nm in manual guise it trails the S to 100km/h by 0.3 seconds, covering the benchmark sprint in 5.0 seconds dead. Quick enough then, and the engine's flexibility impresses, with plenty of urgency at low revs and a linear delivery right up to its 7,800rpm redline.

The standard suspension provides fantastic control and precision, yet rides with a suppleness that's impressive, meaning you can leave the PASM variable suspension on the options list for once. Despite the loss of its roof it feels no less precise to drive than the coupé, though we still have some reservations about the new electric steering system. It's finely weighted, but it's lost some of the detail that was delivered from the 997's hydraulic set-up.

As we suspected, the seven-speed three-pedal set up seems to work better in right-hand drive - though it's unusual to see a 911 Cabriolet with a manual gearbox, as most use the PDK automatic. Ultimately lacking the precision of the 997's six-speed manual, the seven-speed unit's shift is crisp enough through first to fourth. However, the springing and spacing across the gate above that to seventh needs some patience and practice, as it lacks the sort of accuracy you might expect from a Porsche manual transmission. Given the 911 delivers so much in the first four gears it's only a minor irritant, but it's a shame that there's now even more incentive for buyers to opt for the PDK.

The 991-series Porsche 911 gains more standard equipment than its predecessor, but then its price has leapt up a bit too. There are still some must-have options that Porsche shamefully asks more for (such as Bluetooth) and factor in a few grand for that sports exhaust, too.

The Porsche 911's tradition of being a useable, day-to-day proposition is furthered in this 991-model. Fuel economy and emissions improvements see it return 30.7mpg (9.2 litres/100km) on the official combined cycle, with a CO2 figure of 217g/km impressing given the performance. Opt for PDK and those numbers improve further still.

Porsche's 911 coupé is rightfully regarded as one of the best sports cars you can buy so by association the Cabriolet is one of the best drop-tops. You lose nothing in driving appeal in the new Cabriolet; indeed, with the engine more vocal behind you it's arguably more appealing. The Carrera feels no less of a car than its 3.8-litre relative either, and so the 911 Cabriolet remains the benchmark car in its class.