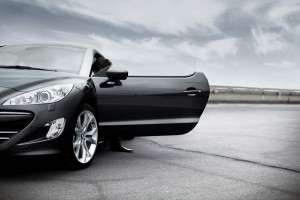 Our first taste of the stylish new Peugeot RCZ at the international launch suggests it'll be just as good to drive as it is to look at.

April 16 - arrived despite antics of volcano

We've arrived (amidst the chaos of volcanic dust from Iceland) to Northern Spain for the launch of the Peugeot RCZ. Yes, I know what you are thinking, because we were too: here is the Audi TT rip-off.

I can't really say I was overly excited about the prospect of driving this car. I know it looks good, but it could have been very average to drive and then all you are left with is something to pose in and there are enough cars that deliver on appearance and on little else. Peugeot gave up doing hot hatches recently, although apparently the GTi badge will be resurrected when the 207 is replaced by the 208.

The RCZ event is going to be held in some of the best roads around northern Spain and that means that Peugeot obviously isn't hiding. If its car's set up is flawed, these roads will reveal that pretty quickly.

The car itself looks great in the metal, but then again, we knew it would be good-looking. It was voted the most beautiful car of the year 2009 at the 25th International Automobile Festival. Yes, it does have a shape which is quite like an Audi TT's, but that is to oversimplify it. Some of the detailing on the car is very special. But it is going to have to do a lot better than look good to be taken seriously.

First up is the diesel version, as that is the model that Peugeot Ireland is telling us that most Irish customers - 80 percent of them they predict - are going to buy. The stats make sense for Ireland. It comes with a 2.0-litre HDi unit putting out 163bhp and a mere 139g/km, meaning annual road tax of just €156. Fuel economy of 5.3 l/100km (or 53.2mpg) is pretty useful too.

What strikes you first is the lovely cabin. It is easy to get comfortable and the quality is good too, a continuation of excellent interiors in the 3008 and 5008, but obviously more sporty. There is a lot of leather and piano black on the dash and it all feels top drawer. The diesel doesn't clatter all that much, but then few do these days. What is instantly obvious is that this car has nicely weighted steering and that its suspension isn't overly firm, despite sitting on 19-inch alloy wheels - an inch bigger than the rims we will get as standard fit in Ireland.

And the diesel feels good. There is plenty of torque and the six-speed transmission is pretty slick too. But when you push really hard, the diesel does run out of puff - or rather the gearing makes it run out of puff. Third gear isn't long enough and if you drop to second it revs to space, leaving you frustrated. But, for anyone who intends to cruise in their RCZ, with motorways and dual carriageways making up the most part of their trips, then this won't ever become an issue.

Next up was the petrol, the other engine set to be offered in the RCZ, arriving a month after the diesel model, in September 2010. Fitted with a 200bhp 1.6-litre turbocharged engine, jumping straight into this from the diesel shows a marked difference between the two cars. The diesel is good, but the petrol model is something else. This unit is fiercely potent, reaching 100km/h in 7.5 seconds, quicker than the 8.2 seconds of the diesel. But more importantly, it lets you rev much higher and the gearing is infinitely better. It feels like a true hot hatch, whereas the diesel feels like a very good cruiser. The petrol never seems to run out of puff and although it will cost you a fraction more to tax each year - €291 extra to be exact - and certainly more in fuel, this for us feels like the best set-up for this particular car.

It is likely that most buyers will choose the diesel model, which is probably likely to be marginally cheaper to buy too, but we'd encourage anyone buying to try both first before making a call.

Pricing has yet to be decided, but Peugeot expects the RCZ to retail at about €35,000 for the diesel, which arrives in August, with the petrol version costing slightly more when it comes in September. Standard equipment on the car will include 18-inch alloy wheels, climate control and leather upholstery. Key rivals for the car are the VW Scirocco, which sells primarily as a petrol model at €25,000 for the 1.4 TSI engine with 122bhp. If you want a 170bhp diesel or 210bhp petrol Scirocco then this will cost you closer to €35,000.

This is a further indication of good things to come from Peugeot and having seen just how good the French company can do a chassis, then we really hope they give us a good hot hatch again soon.