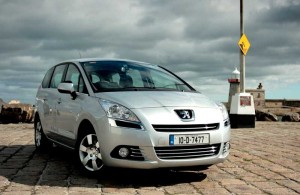 If you need a seven-seat MPV then we reckon the Peugeot 5008 should be the first on your list.

Peugeot is on a crest of a wave right now. In the last year the excellent 3008 has arrived, as well as the good-looking RCZ coupé, a car that is good enough to deserve comparison to the Audi TT. And while Peugeot's numbering system might be starting to get a little on the confusing side, we expect that the 5008 MPV will be rather good.

First impressions are just that. Yes, it certainly looks more MPV than SUV, but it still retains some of the styling cues of the increasingly popular 3008 crossover. Traditionally the MPV segment has been really dull until models like the Ford S-Max slowly started to change that. Hopefully Peugeot's latest MPV will be better than its last efforts, the 807 and 806.

The build quality of this new 5008 feels first class. It is seriously impressive and quite a world away from Peugeots of ten years ago. There is a solidity to everything and the plastics used are first rate. They would need to be too, when you consider the abuse that cars such as these have to put up with.

The handbrake is placed high up under the gear shifter, which frees up space for a larger centre console storage box. The huge glass area, both in terms of the windscreen and the glass roof, gives the cabin a really airy feel. It is really very spacious inside in terms of shoulder and elbow room too. Leg room is also generous, as is head room.

All three seats in the second row are identical and can be reclined and moved forwards and backwards over a distance of 130mm. They can also be folded individually into the floor to form a flat surface. The front passenger seat can also be folded flat into a shelf configuration - it is possible to load long objects as far as the fascia panel. The load length in this configuration (all seats folded away and the front passenger seat folded flat in the shelf position) is 2.76m.

On the motorway this car feels ultra stable, but it is also remarkably good on the twisty stuff . You might think that 110hp isn't near enough for a vehicle of this size, but surprisingly it is fine and copes well while still returning 5.3 l/100km. With CO2 emissions of just 140g/km it scrapes into Band B so you will pay just €156 in annual road tax.

For €28,995 you can get the SX version tested here, which features cruise control, front fog lights, 16-inch alloy wheels, window blinds in row two, electric windows all round and a leather gear knob. This is in addition to the already generous spec on the standard SE model. At this price this is the best value large MPV around but to our minds it is also the best. For us, this is the best MPV you can buy right now.