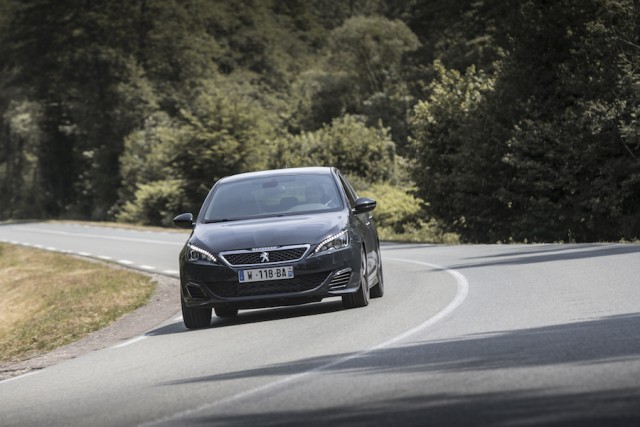 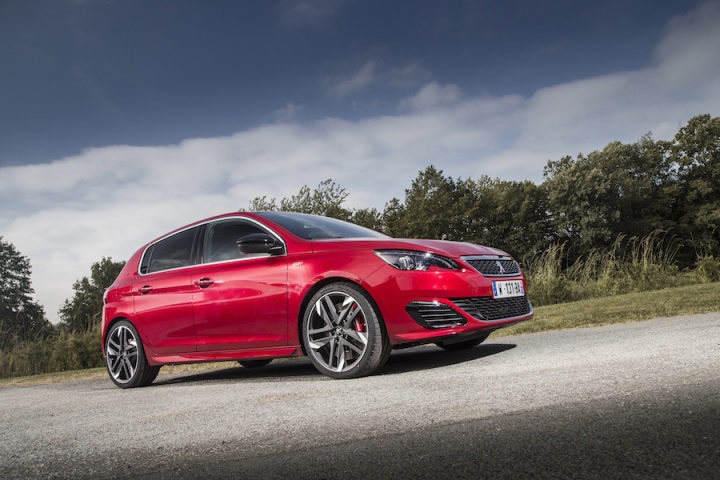 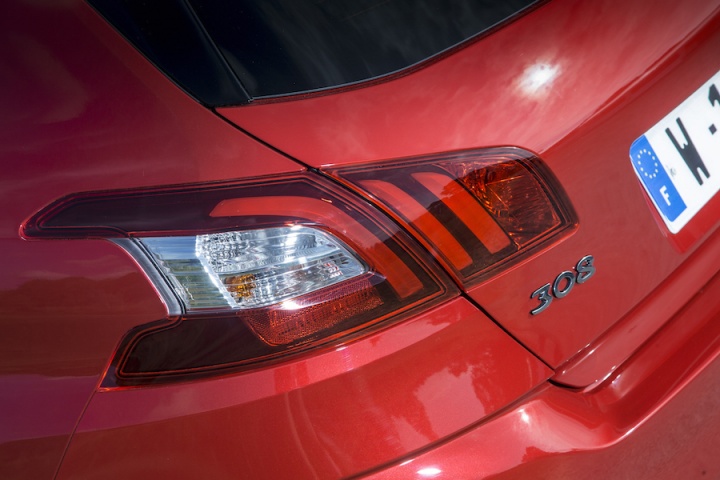 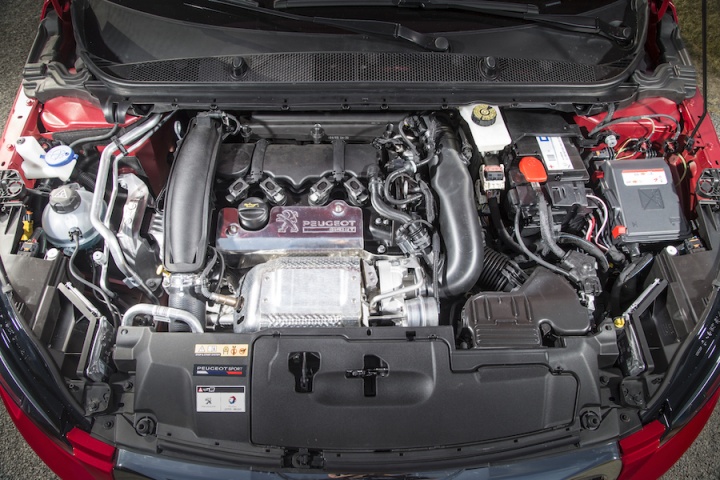 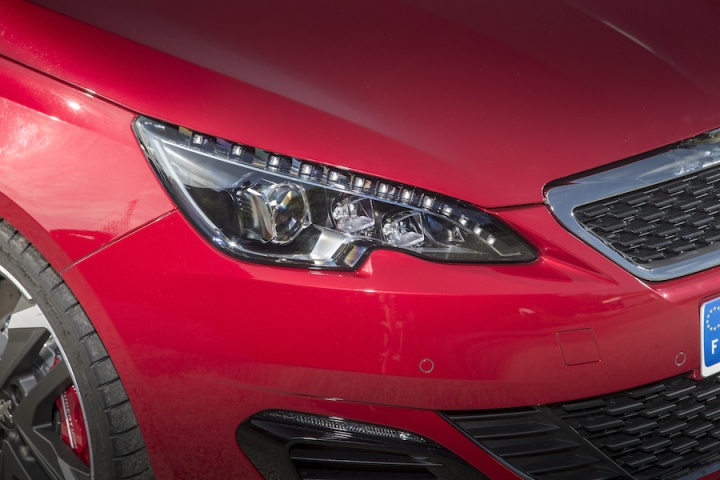 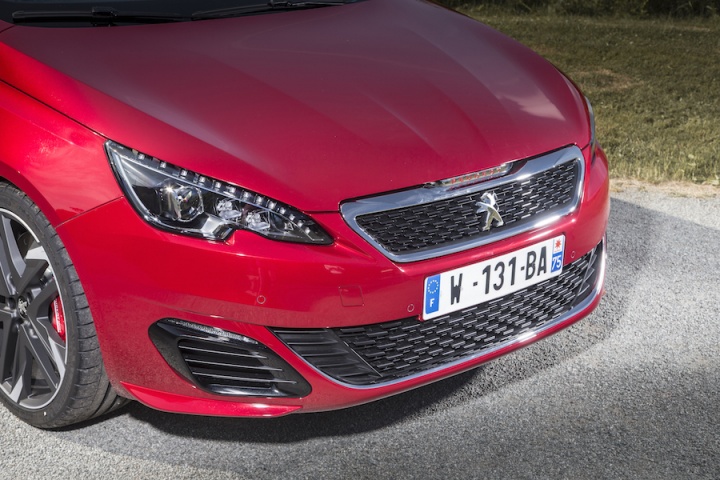 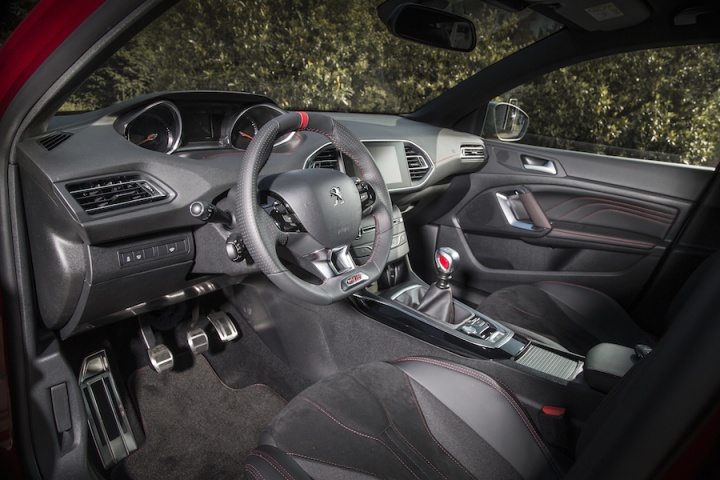 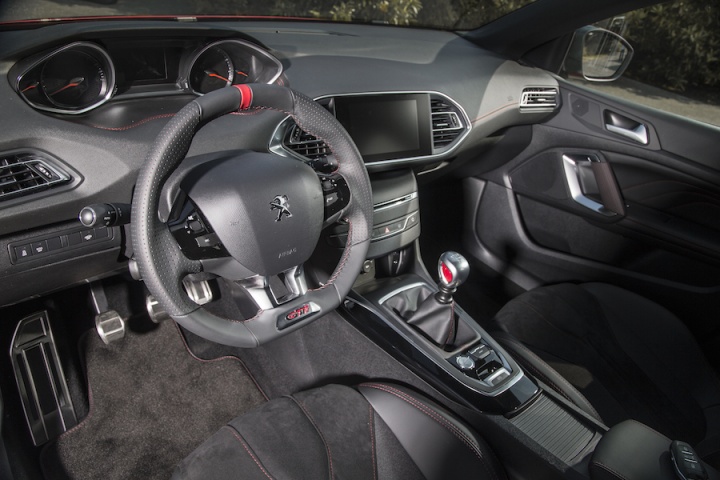 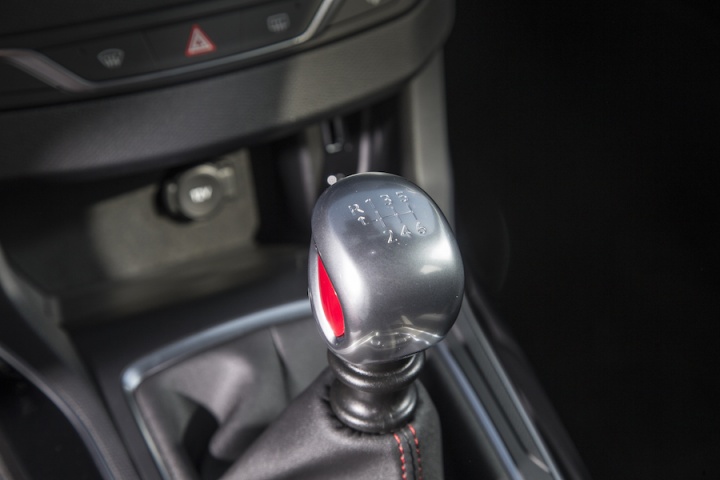 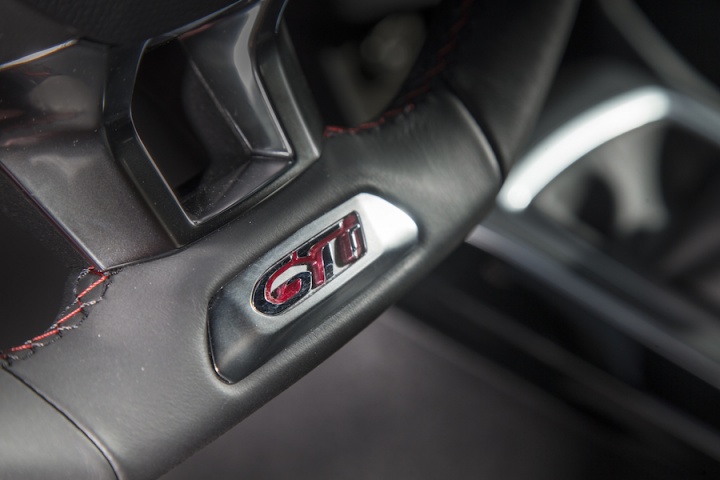 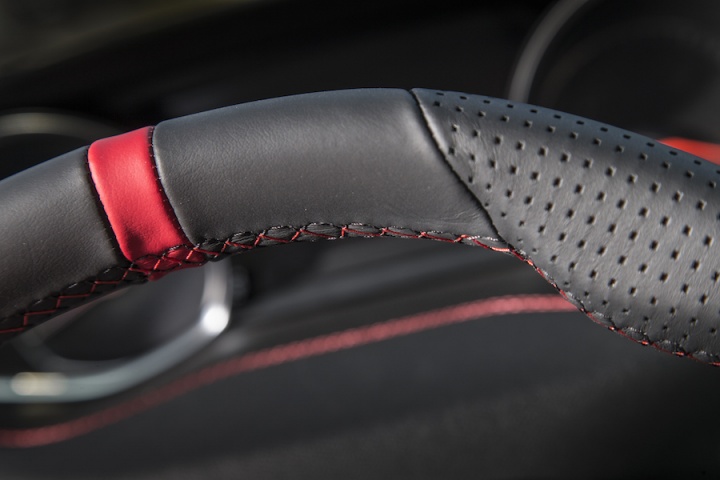 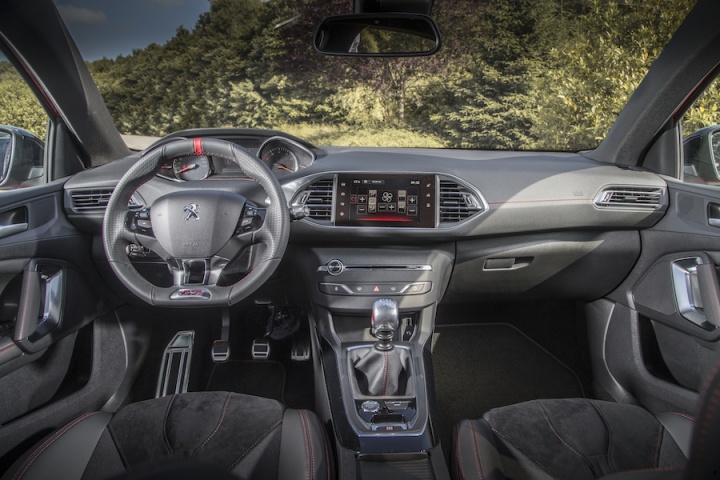 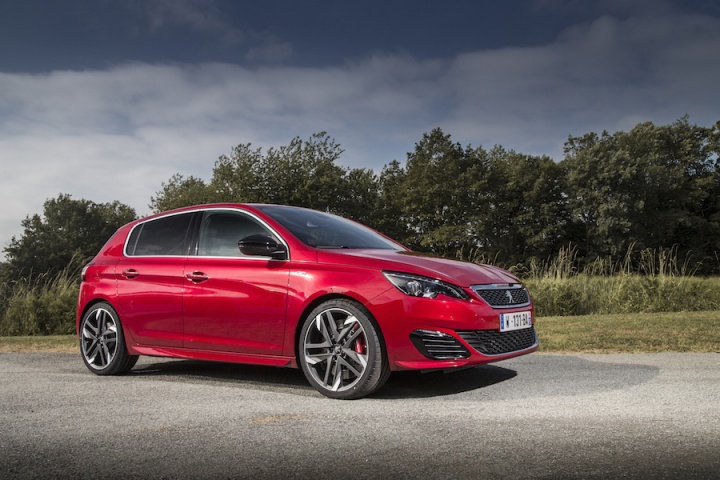 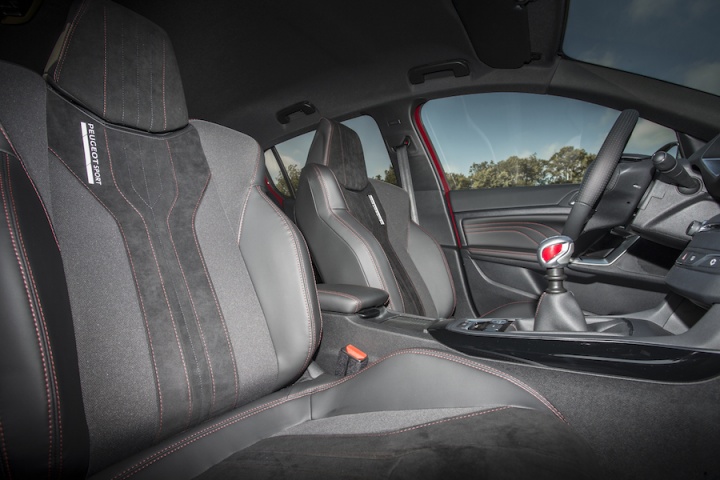 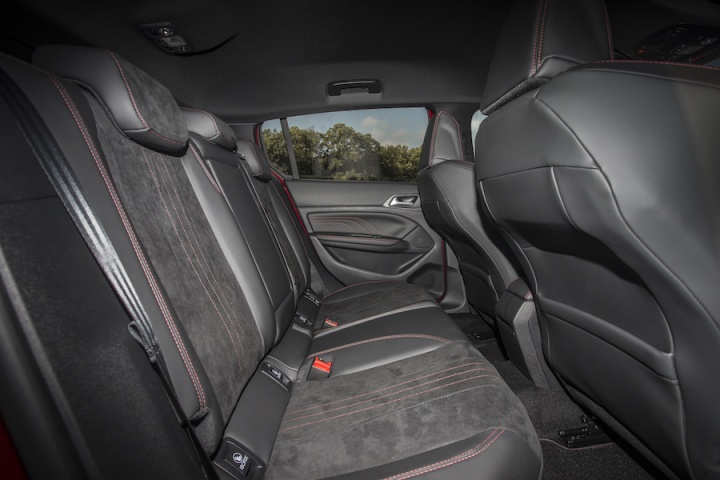 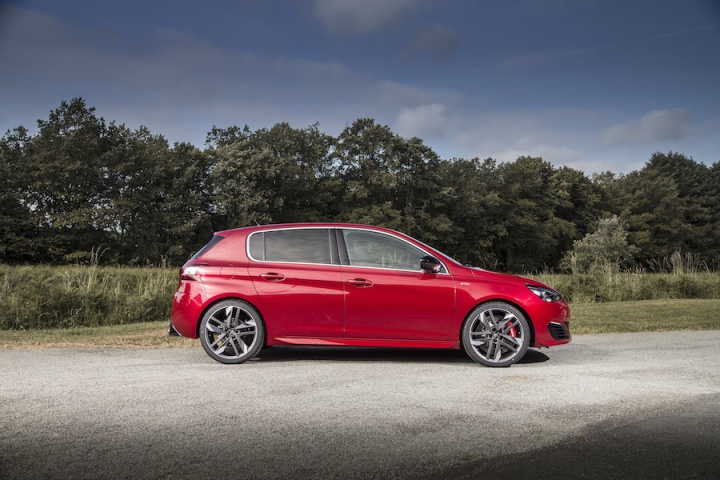 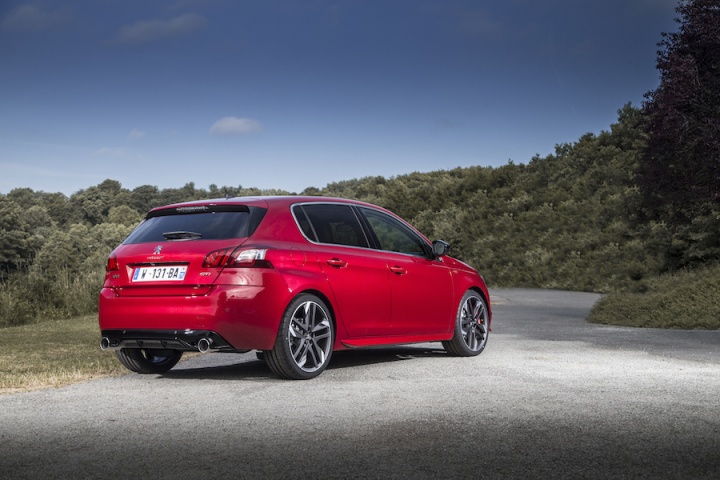 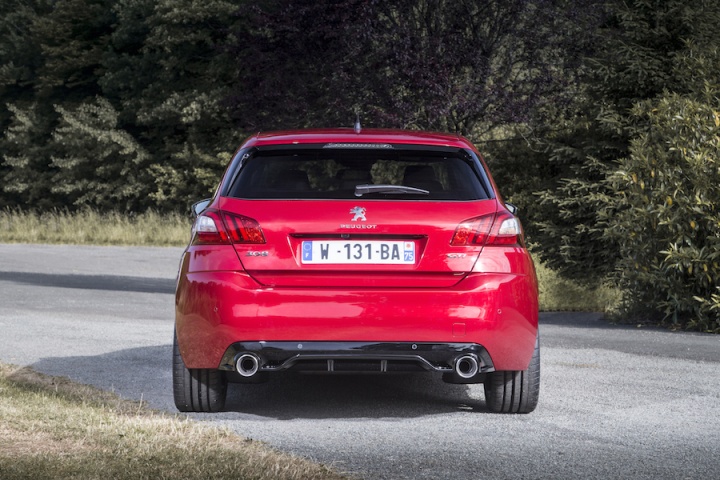 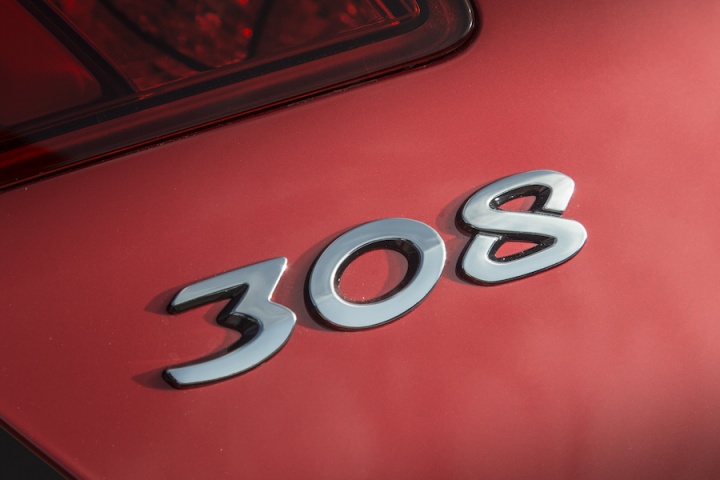 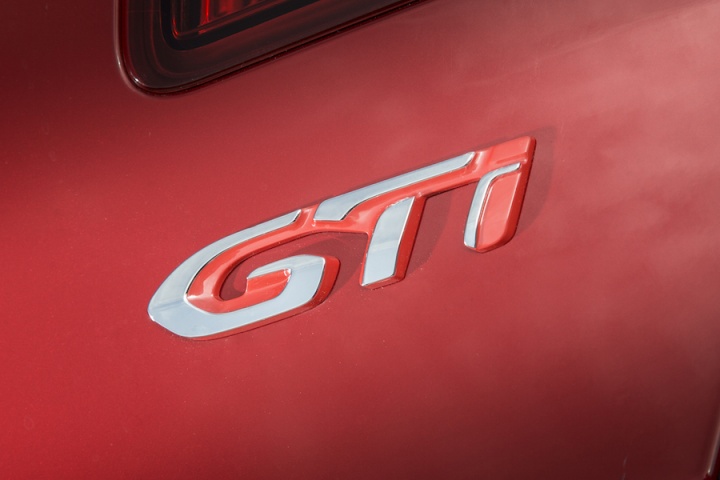 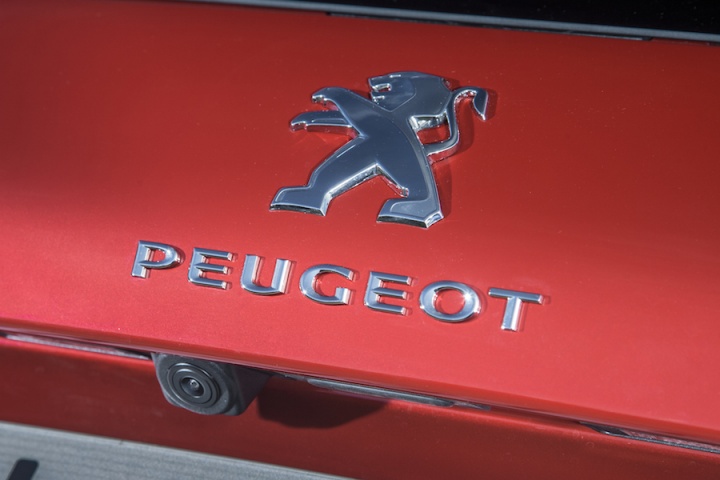 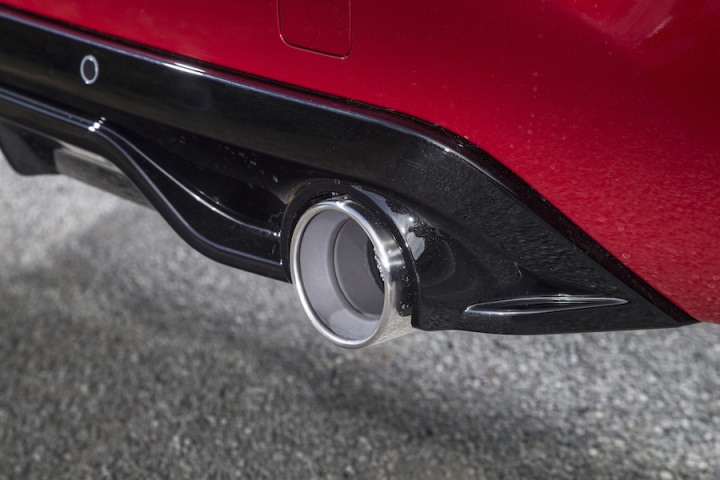 The new Peugeot 308 GTi 270 is a talented hot hatch in a hyper hatch world.

An early drive of Peugeot's new 308 GTi reveals it to be a talented all-rounder, but the hot hatch marketplace has harder charging, cheaper and more engaging alternatives. Here's our review of the high-spec 270hp variant.

The Peugeot 308 is a handsome looking hatchback in regular guise, so adding GTi to the boot lid (and plenty of other places too) only adds to that. There's some red pin-striping, which you'd expect, smart 19-inch alloys and subtle aero modifications around the back, but if it weren't for those badges you could miss it for one of Peugeot's GT Line cars, which is going to hurt if you've shelled out the extra that the GTi 270 commands. It's subdued in terms of looks then, to the point of anonymity among rivals that aren't shy in showing what they've got. If you want your 308 GTi to really stand out this range-topping GTi 270 is offered with the Coupe Franche (red-fronted, black-bummed) bi-colour paintwork option, which kind of works - just - on the more youthful, exuberant and smaller 208 GTi, but looks a bit try-hard and silly on the 308 if you ask me.

Sports seats with body-hugging bolsters are to be expected inside, as is a smattering of GTi details, a too small and oddly-shaped steering wheel and the inability to see the instruments by all drivers without compromising their driving position. Not useful in something that'll reach 100km/h in six seconds. It's a smart cabin though, and the GTi evolution does nothing to change that. Sadly the infotainment system has many unintuitive, layered menus and on first acquaintance at least is a mystery of befuddled and increasingly frustrated prodding - to the point of distraction. Ignore that, if you can, and instead enjoy the smartly finished, high quality interior and enjoy the relatively low button count - until you discover the lack of buttons means you need to use that touchscreen system again, that is. There's a Sport button that's worth taking notice of instead, which pipes engine sounds through the speakers and reduces power steering assistance. As neither adds anything approaching an authentic improvement, we'd just leave it well alone. It makes the instruments glow an angrier red, too, though some drivers will have to shuffle about in their seat or move that tiny steering wheel to appreciate that.

That a power output of 270hp is nibbling at the lower fringes of the hot hatch spectrum tells you everything you need to know about how mad the market for fast, red-striped family cars has become. Peugeot says it has deliberately not gunned for the biggest power output, instead focusing on chassis balance and agility, and this 270hp version comes as standard with a Torsen differential to allow it to exploit its full 270hp - and more usefully the 330Nm of twist produced by its 1.6-litre turbocharged petrol engine. By any measure it's quick, 6.0 seconds to 100km/h demonstrating that, only it's not as overt in its delivery as some of its rivals. Like most of them it's turbocharged, which means plentiful low-rev urgency and a muscular, near instantaneous hit of acceleration across the entire rev range. Mated here exclusively to a six-speed manual transmission, even being brutal with the GTi sees it respond with manners that are surprising, extraordinary even, given the plentiful urge driving those front wheels. Chassis and drivetrain development has come a long way from Peugeot's (and every other manufacturers') early hedge-, ditch- and field-finding hot hatchbacks.

With that composure, easy speed and (in that brilliantly French manner) a remarkably supple ride quality despite the taut set up, comes an aloofness that means it'll shrug off, with Gallic nonchalance, pretty much anything you ask of it. Fling it into a corner and it grips and goes round, without any real hassle. More speed, no problem, the 308 GTi 270 is as fast as you'd ever need a hatchback to be, at least where you're limited by legal speed restrictions. It flows, thanks to that suspension, down the road very convincingly indeed, but with the chassis' clear development comes a degree of remoteness; the GTi is capable, but just not engaging, it rarely if ever goading you into pushing it a bit harder for the hell of it - which the best of its rivals do, with wild abandon.

Blame the inert steering, which though undoubtedly quick and accurate turns the 308 GTi without delivering anything noteworthy regarding feel back through its tiny, odd-shaped steering wheel. There's no spark to the engine either, no real need to work it, and the gearshift is acceptable rather than remarkable. Cars with Renaultsport, Cupra and Type R badges on them are all more memorable, while the prospect of Ford's all-wheel drive, drift mode equipped Focus RS with over 80hp more rather makes Peugeot's efforts look in vain. In isolation it's admirable, but it's not a GTi with the sort of infectious rambunctious nature that's all about the driving first, and a practical hatchback second. It's very much the other way around here, however impressive its execution.

The specification of Irish cars is the exact same as those in the rest of Europe. There are two distinct models to choose from: the standard 250hp 308 GTi and the 270hp version tested here, which also gains a mechanical limited slip differential. Pricing starts at €36,990 for the 250hp car, while the 270hp model is priced from €39,990.

Ford Focus ST: more or less a direct rival to the 308 GTi 250, but wears its performance heart on its sleeve.

Honda Civic Type R: the antithesis to Peugeot's subdued approach to hot-hatchery; extrovert barely covers it, and more fun, too.

Renaultsport Megane: Peugeot's Gallic foe, it's been the benchmark since it was introduced, it only gets faster, and more fun as it ages. Disgracefully.

Calling a turbocharged, front-wheel drive, differential equipped hot hatch with 270hp anything other than mighty may seem ludicrous, but for all the Peugeot 308 GTi 270's obvious talent it's a difficult car to love in a class that majors on fun. It does demonstrate that Peugeot Sport has got its act together, and when asked if it might have a response to ever-increasing outputs of rivals it didn't exactly say no, either. More power might help, but the 308 GTi's skill-set, deep as it is, isn't engaging enough to have car nuts running into lion-branded dealerships in droves. That's a problem, as the competition has never been tougher, in every sense of the word. Its popularity here will clearly depend on pricing.