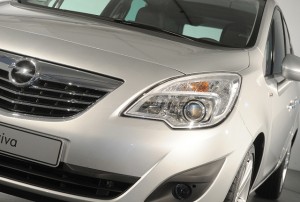 Opel's new Meriva features rear-opening back doors; and it's no gimmick.

Thursday 30th April: Reporting from the launch in Hamburg, Germany

You might worry when a car's unique selling point is the rear doors. The Meriva has rear-hinged back doors, which open like old-fashioned 'suicide doors'. Is this a cynical marketing ploy designed to make what was quite an ordinary car a little more interesting? Perhaps, but we'll give Opel the benefit of the doubt.

Suicide doors were outlawed in 1961 due to safety issues, but the fact is, they're the most practical way of getting into and out of the back of a car. Rolls-Royce brought them back properly and the European law (ECE R11 if you're interested) has now made them legal again. But should we care? And more to the point, is this all there is of interest in the new Meriva?

Ergonomics and ease of use seem to be what this Meriva aims to do well. Rainer Gruner, Opel's Human Vehicle Integration Supervisor, explained how this type of door will make your back happier, your children safer and your rear seat passengers feel quite regal.

In Europe, the previous Meriva was quite the success story. The company has sold a million Merivas since 2003, which is pretty impressive.

When are we getting it? And why should we care?

Opel dished out a series of old Merivas to drive at the start of the event, which felt a little dated, but they made the new model seem a world away. There are various bits and pieces stolen from every Opel parts bin including the Insignia and Astra - but that's no bad thing. Quality is far better than before too. The cabin is a little on the busy side in terms of buttons but this is sure to change when some of the optional extras are dropped on the way to Ireland.

What about the doors?

We've seldom been so keen to try a car's back seats and these ones are very clever. It's easy to get in and out and the fact that the door opening is so wide - 84 degrees - makes it very easy to fit child seats. Let us not forget that the previous Meriva was a car coveted by the older buyer and this one is likely to be the same. It isn't sexy to market a car to pensioners but the way this Meriva is laid-out and the ease of access make it perfect for those drivers who aren't as bendy as they used to be. Private taxi firms might be keen, too.

Because the tested engines aren't likely to be big sellers in Ireland, we will reserve proper judgement until the Meriva makes it over here in July. First impressions suggest that this is a well-built car though, wrapped up in a genuinely innovative package - the driving experience is much improved too.