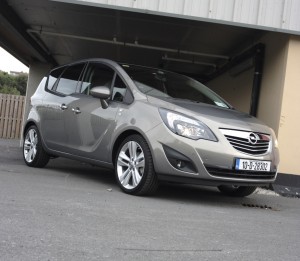 Opel's Meriva is more than just some clever doors. This is one of the best new small family cars around.

The Opel Meriva is a car that we praised enthusiastically after we drove it at the European launch, so we were very curious to find out just how it would perform once we got it back to our home shores. There is no question that this is one of the most cleverly thought out cars to have been launched in the last ten years and it is also a significant improvement over the previous, first-generation Meriva, a car that had a loyal - if somewhat silver-haired - following.

The rear-facing back doors were a feature in cars for decades before safety legislation put an end to them in the 1960s, only to be resurrected by Rolls-Royce.

Now Opel is bringing them back to a mainstream audience and it is a design so effective that you'd wonder why it has taken so long to see them return (Mazda RX-8 and MINI Clubman aside). For a start they are super useful. Because they open out so wide (82 degrees) they are easy to get in and out of and crucially make getting a child seat and its contents in and out very easy. There is a safety benefit too, as older kids can be guided in and out by a parent more safely with this type of door.

This week I've my sister-in-law and niece visiting and the Meriva's family car credentials are going to get quite a test.

Even after just two days in the Meriva I can see that the package is brilliant. Today involved picking up my Dad to bring him shopping and he (a retired motoring journalist) remarked how impressed he was by the car's cabin and ride quality and thought that it would be the ideal car for someone of his age because the hip access points are good and the seats are ultra supportive. I'd be inclined to agree.

The afternoon saw my first attempt at child seat installation and it was simple in this car and also easy to get my niece into the seat. She was also chuffed by the amount of glass to see out of, including the full length glass roof that is a feature of the SE spec model we are driving. This car is small enough in terms of its footprint that parking it and driving it in town isn't a nightmare. I'm finding the electronic handbrake a little fiddly, to be honest, and the parking sensors have been annoying me today, as they jammed on once, howling as I drove along a deserted road.

Our test car is the 1.4-litre 120hp turbo petrol model. You'd think that when we mention the 'p' word we'd be sending you straight to the diesel models, but no. For now, the 1.4-litre turbo petrol is the nicest engine and while there is a 100hp 1.4-litre petrol model starting the range, we aren't sure about opting for the 75hp 1.3-litre diesel because it is a little short on performance.

January sees the arrival of the 85hp EcoFLEX version and we'd be inclined to wait for that if you have to have a diesel. I'd have this 120hp petrol because it feels very perky, is still only Band C in terms of emissions and hasn't been all that tough on petrol either.

Later in the evening, my wife collected me and two other six-footers from the pub and they were amazed by the space in the rear and love the various gadgets and gizmos (€5,400 worth of leather, satnav, parking sensors, 18-inch alloys and more) fitted and one of them decides to buy one for his wife.

At this stage I'm pretty sure that I'd like to own one of these and there aren't even any children in the Comyn household just yet. I love the driving position, the seats are magic and it feels really nicely built. Anyone who gets into it adores it. Sure enough, you have to spend quite a few Euro to get the right kind of spec and anyone spending €19,995 on the 1.4-litre 100hp S version is going to find a car without air conditioning, without alloy wheels and without electric windows in the rear - and that is not really excusable when you look at the value on offer these days from Ford, Renault and Kia.

Spending €23,000 - €24,000 on a Meriva if it suits your needs will get you a cracking car, but remember you are straying close to cars like the Peugeot 5008 if you spend much more and if your family intends growing then the Meriva will stop making sense reasonably soon, as two child seats in the rear will pretty much fill up the rear bench. For anyone who wants the slightly elevated driving position of an SUV, wants real versatility from the rear seats and easy access to them, the Meriva is the best small family car about at the moment.