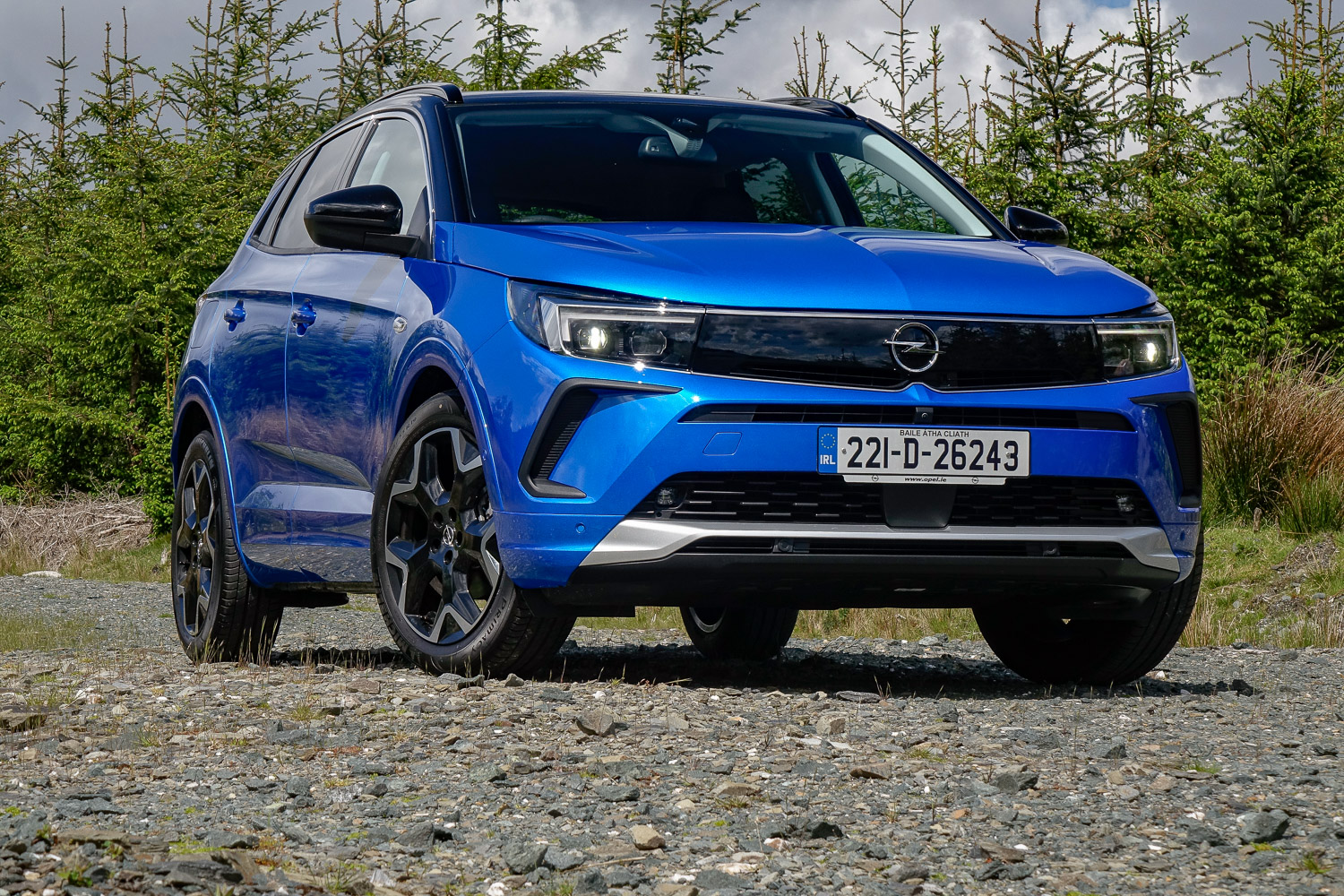 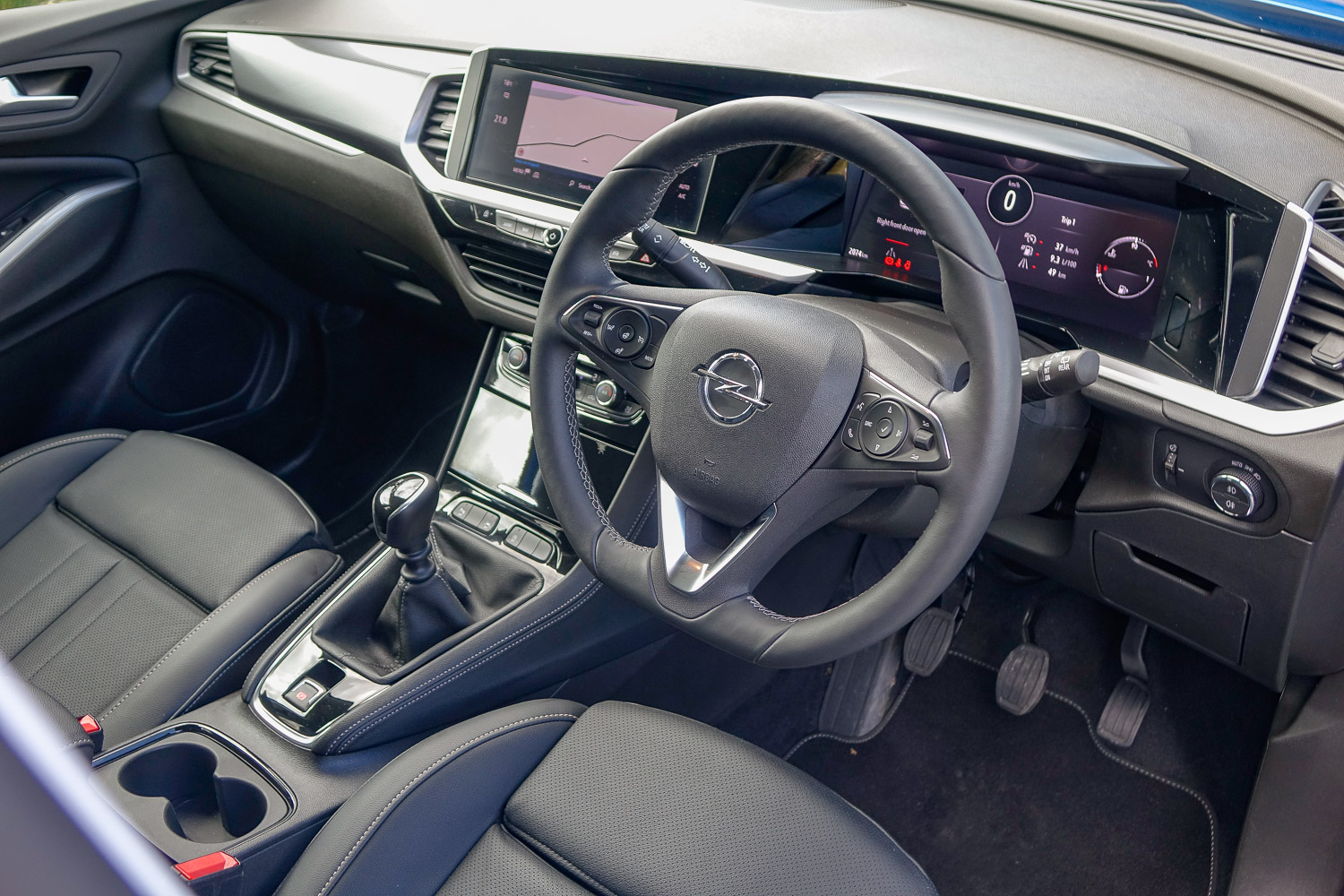 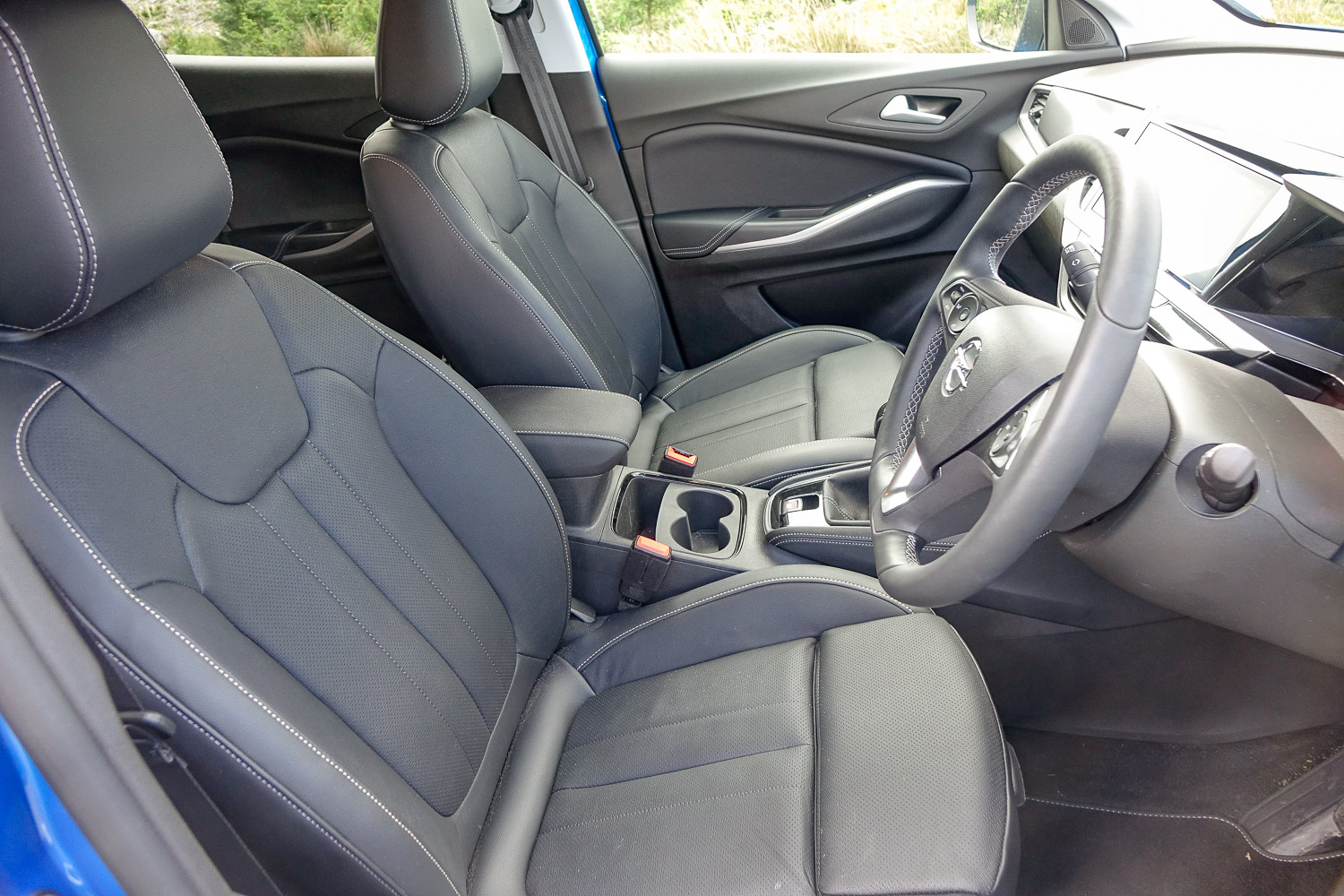 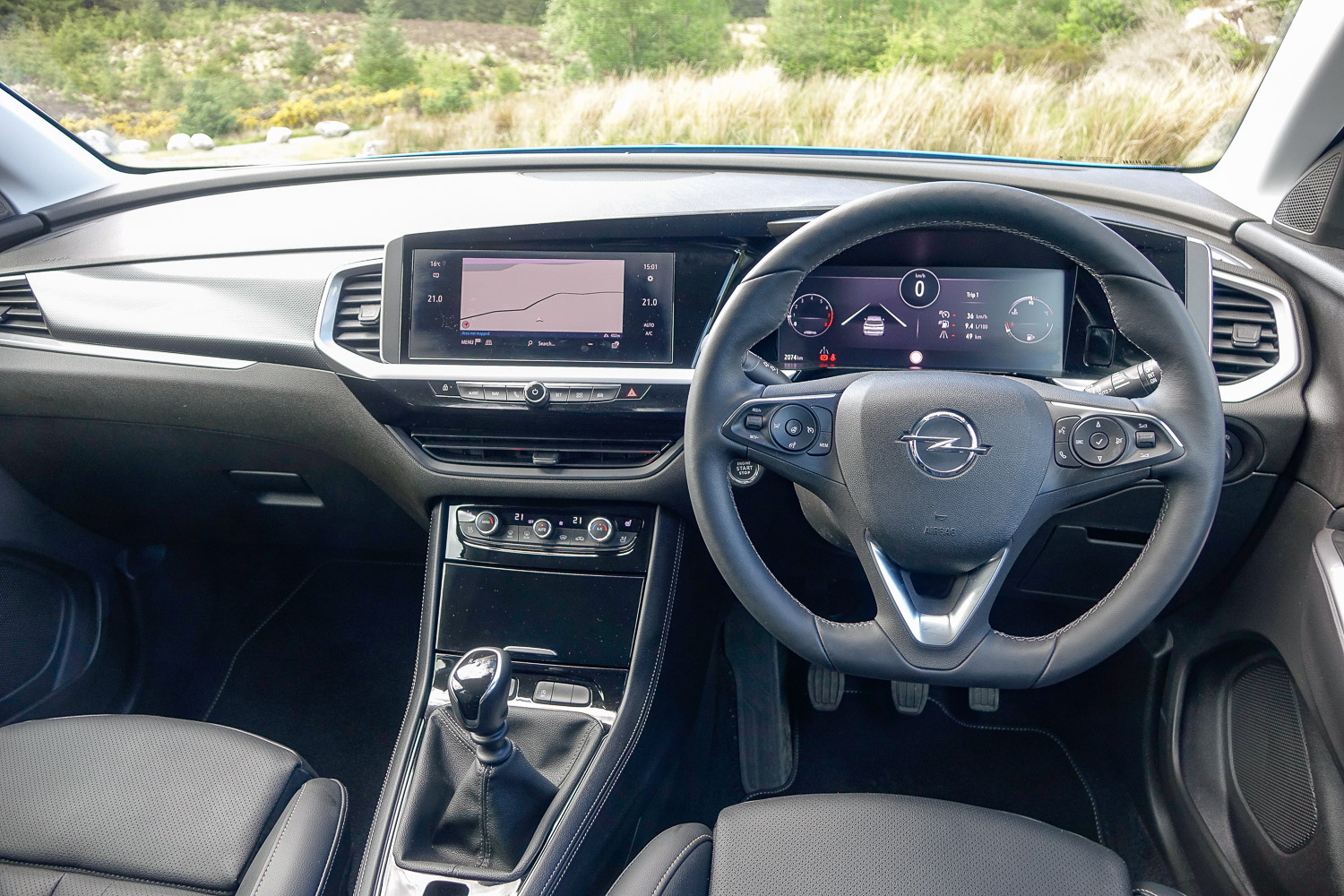 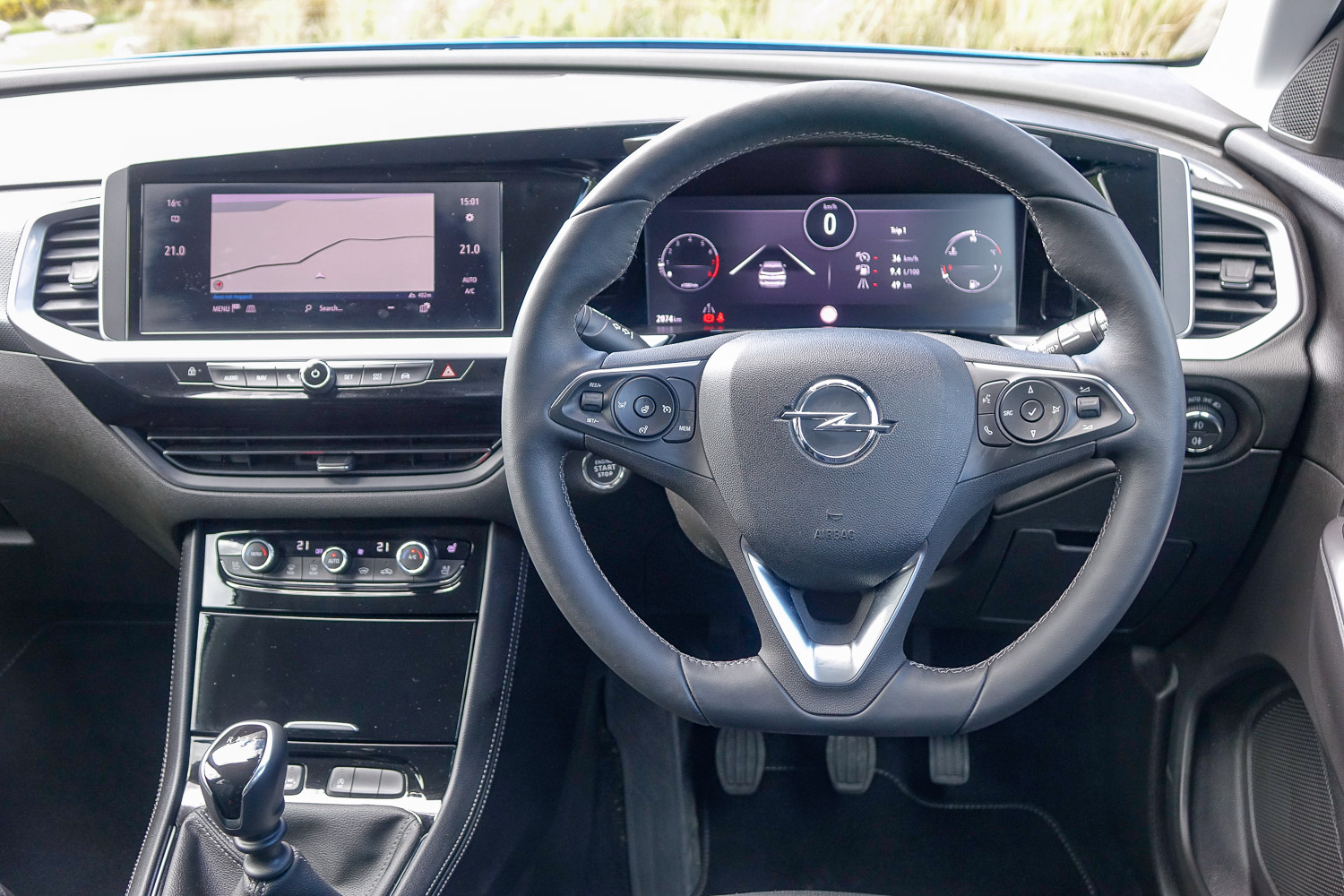 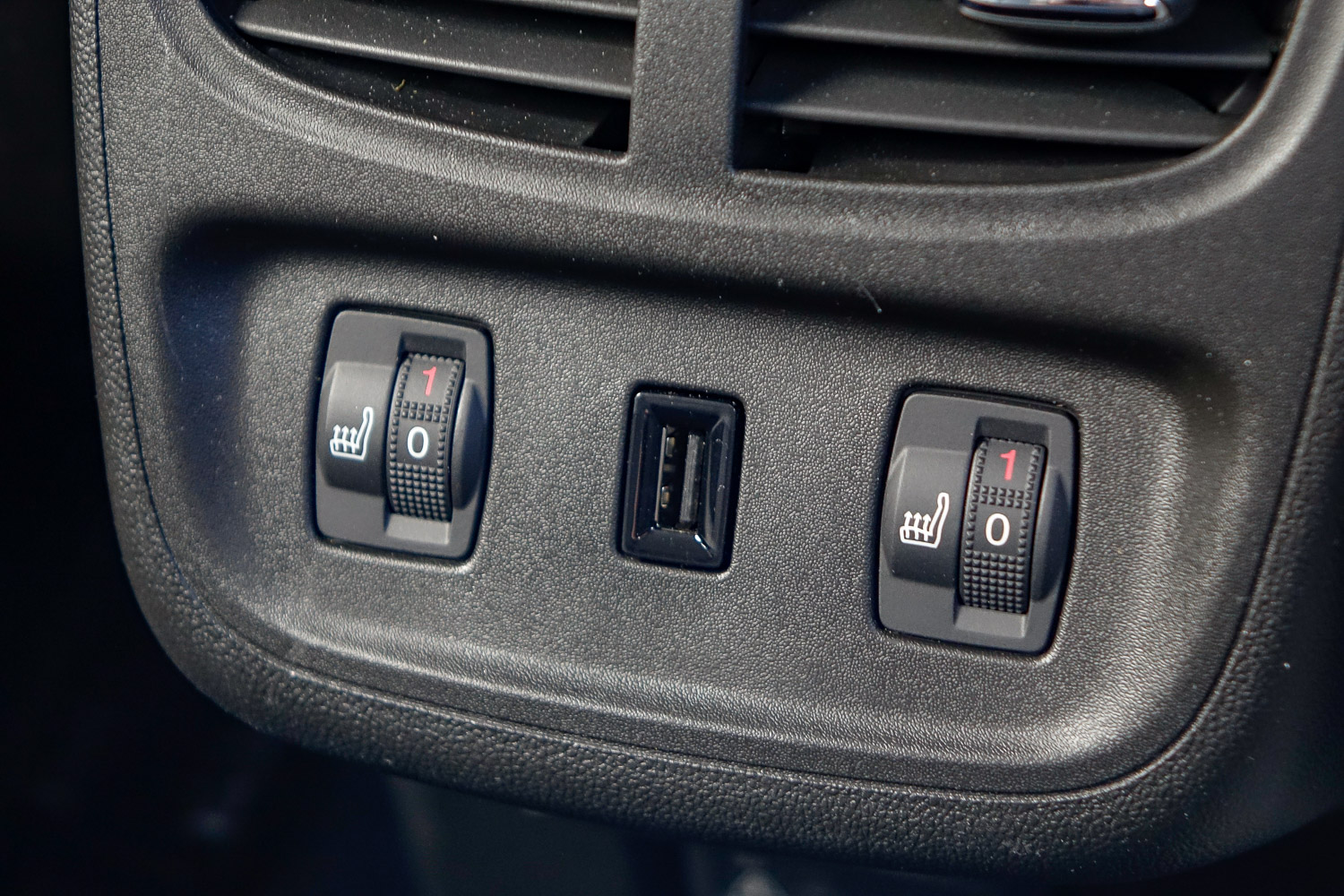 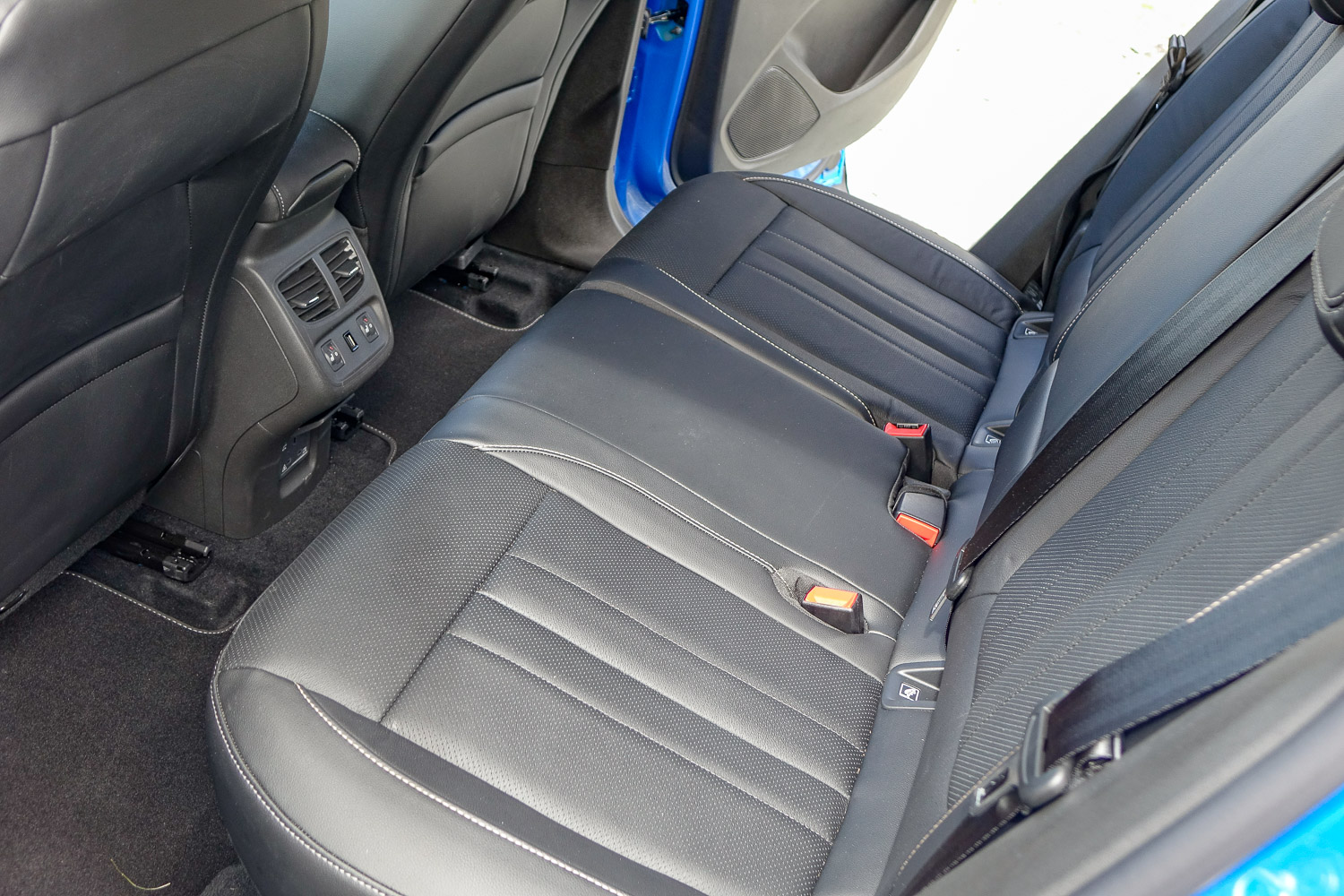 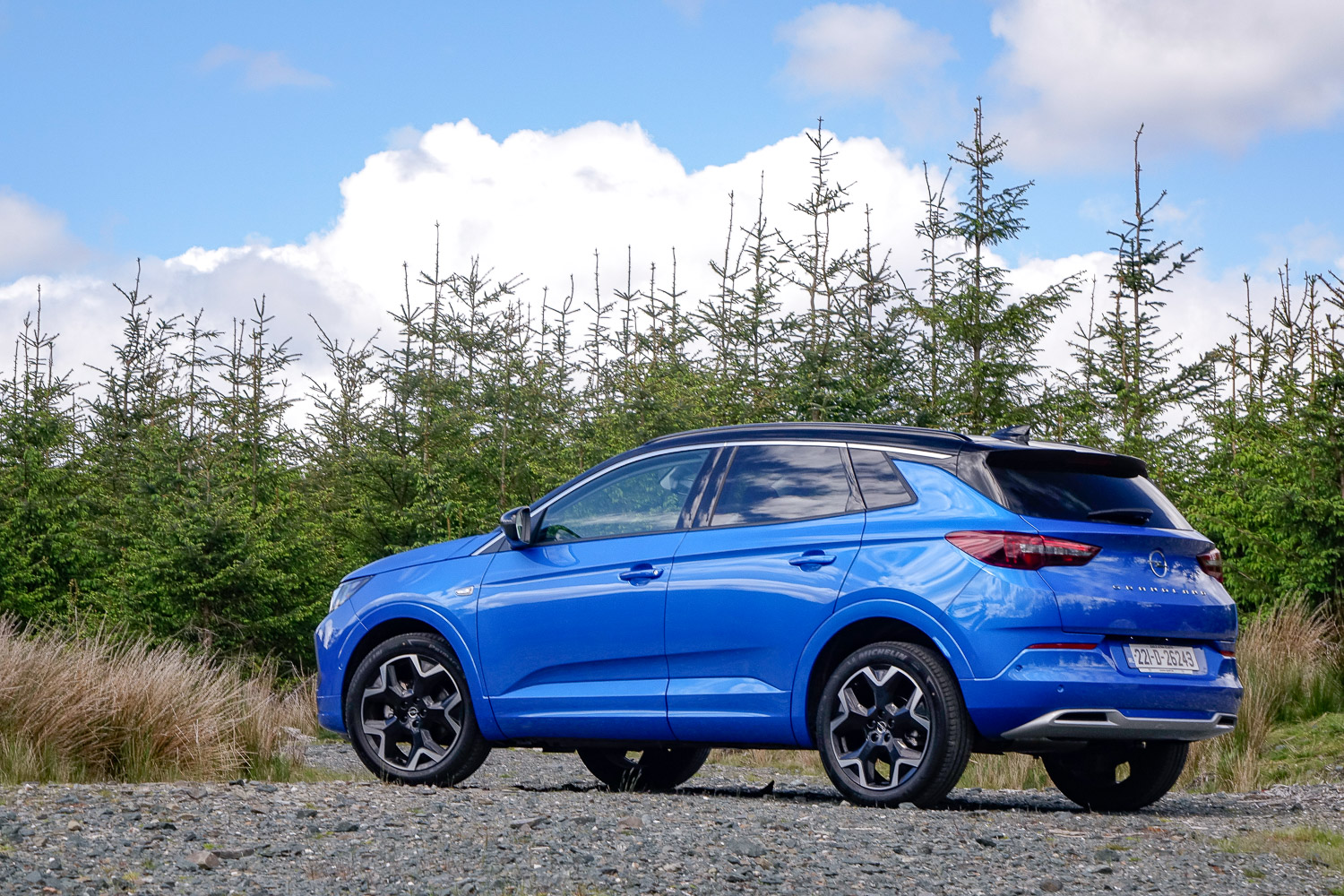 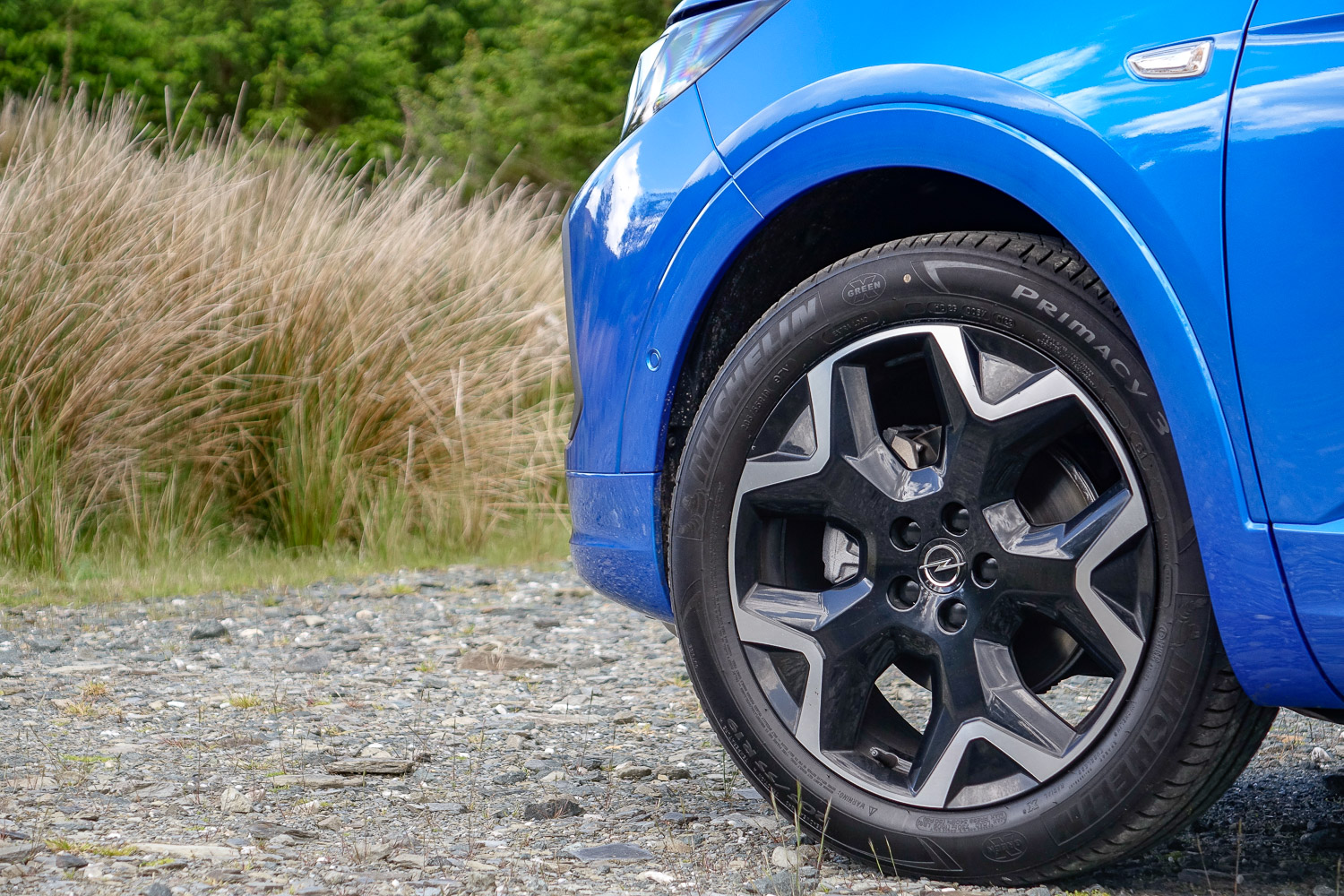 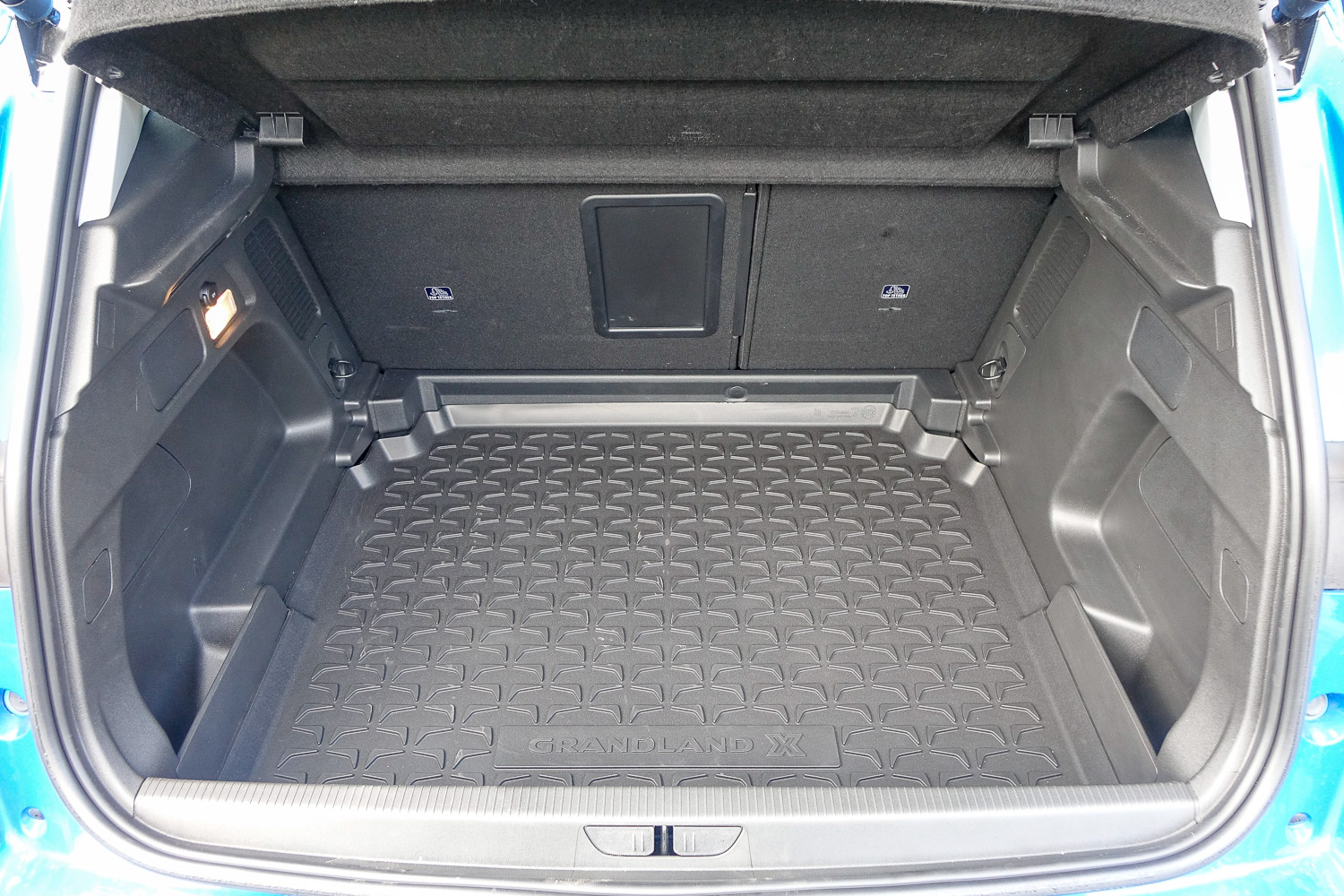 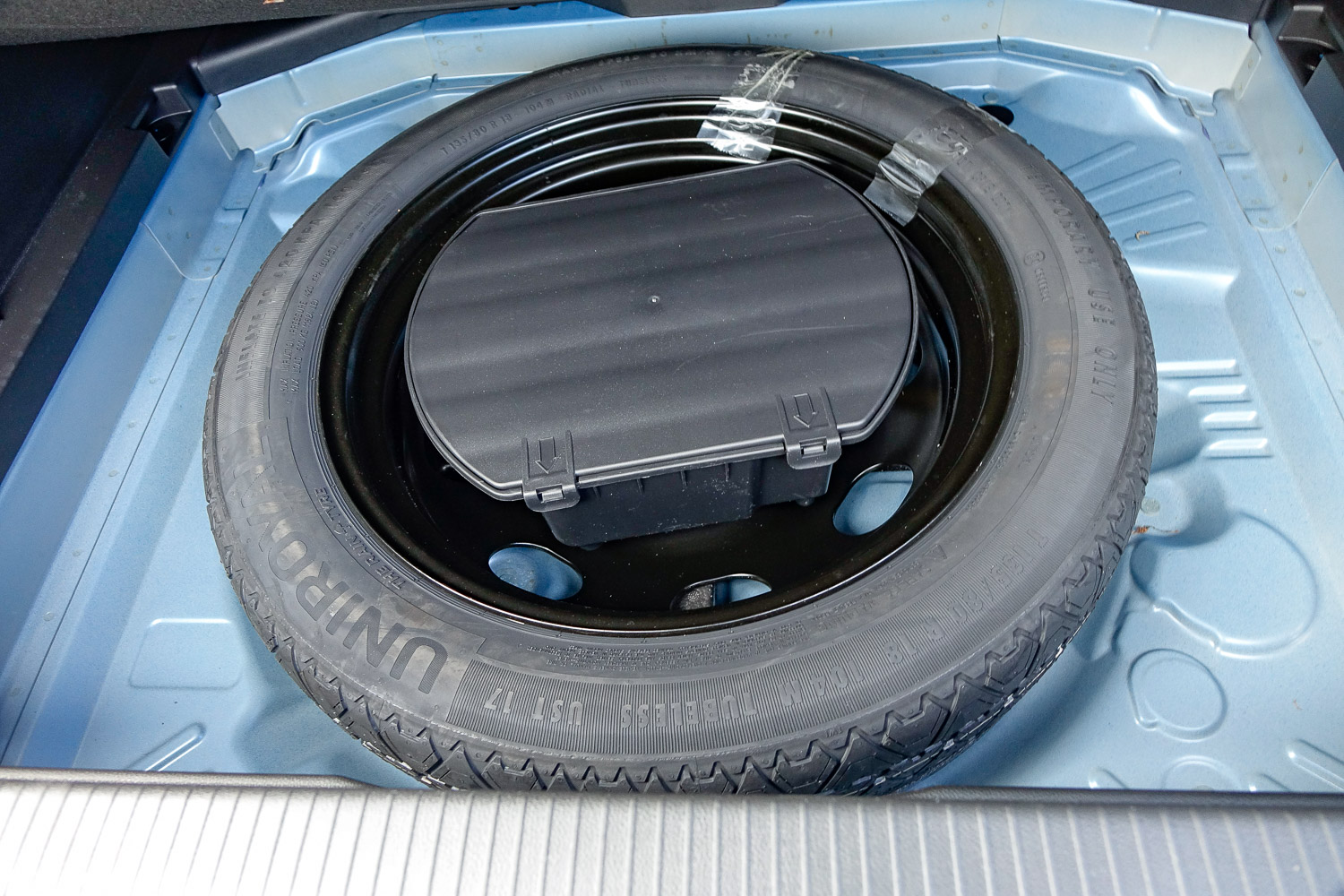 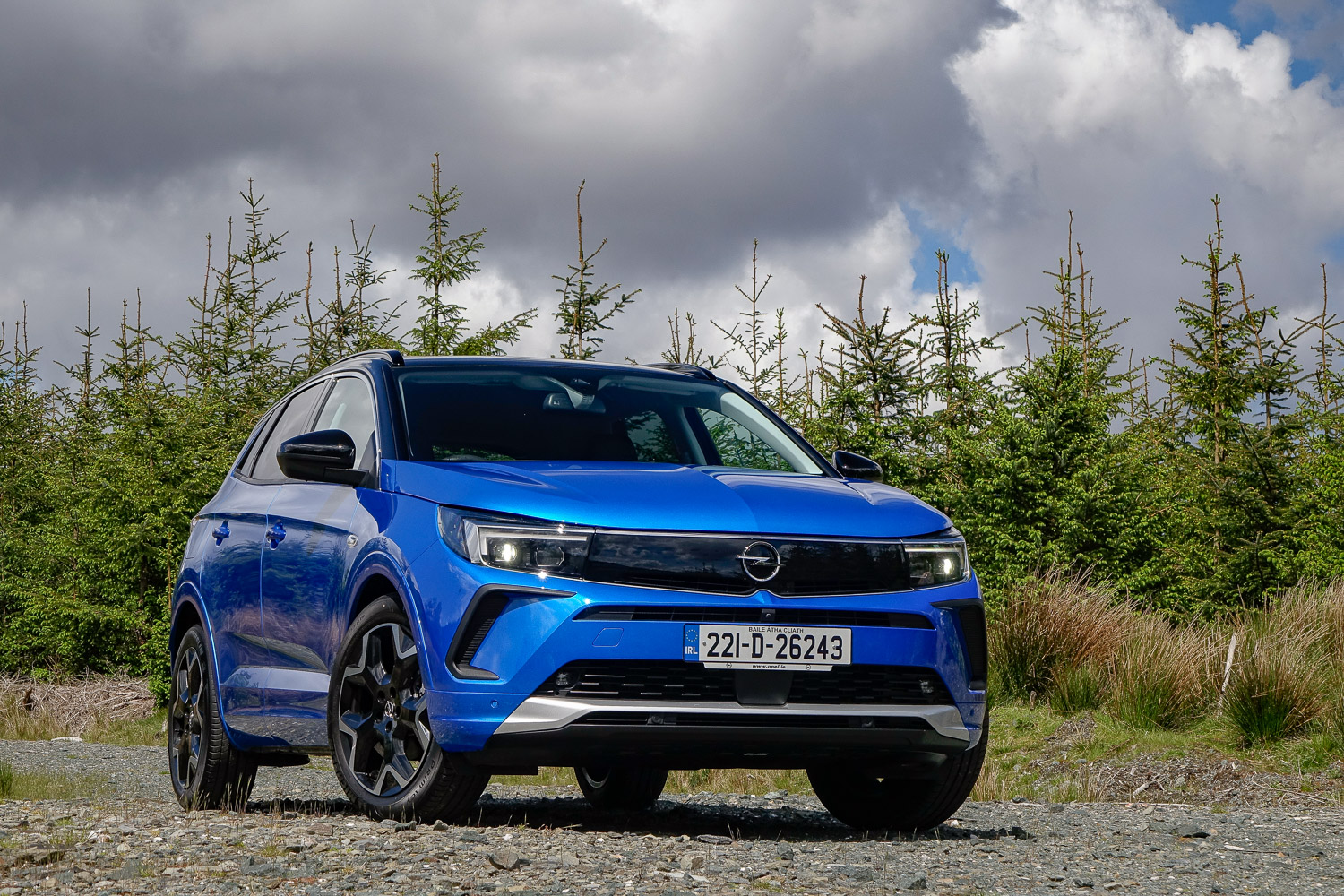 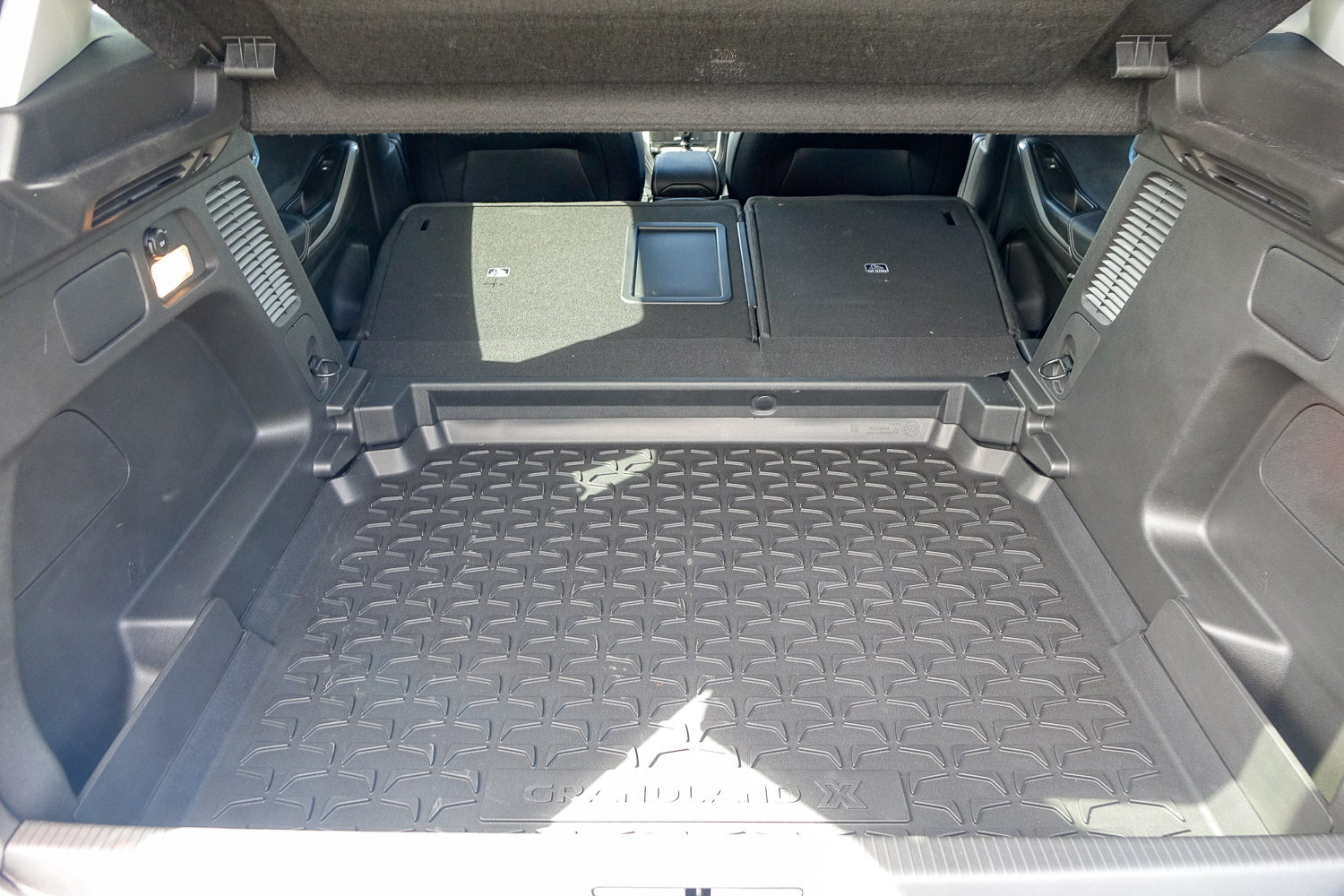 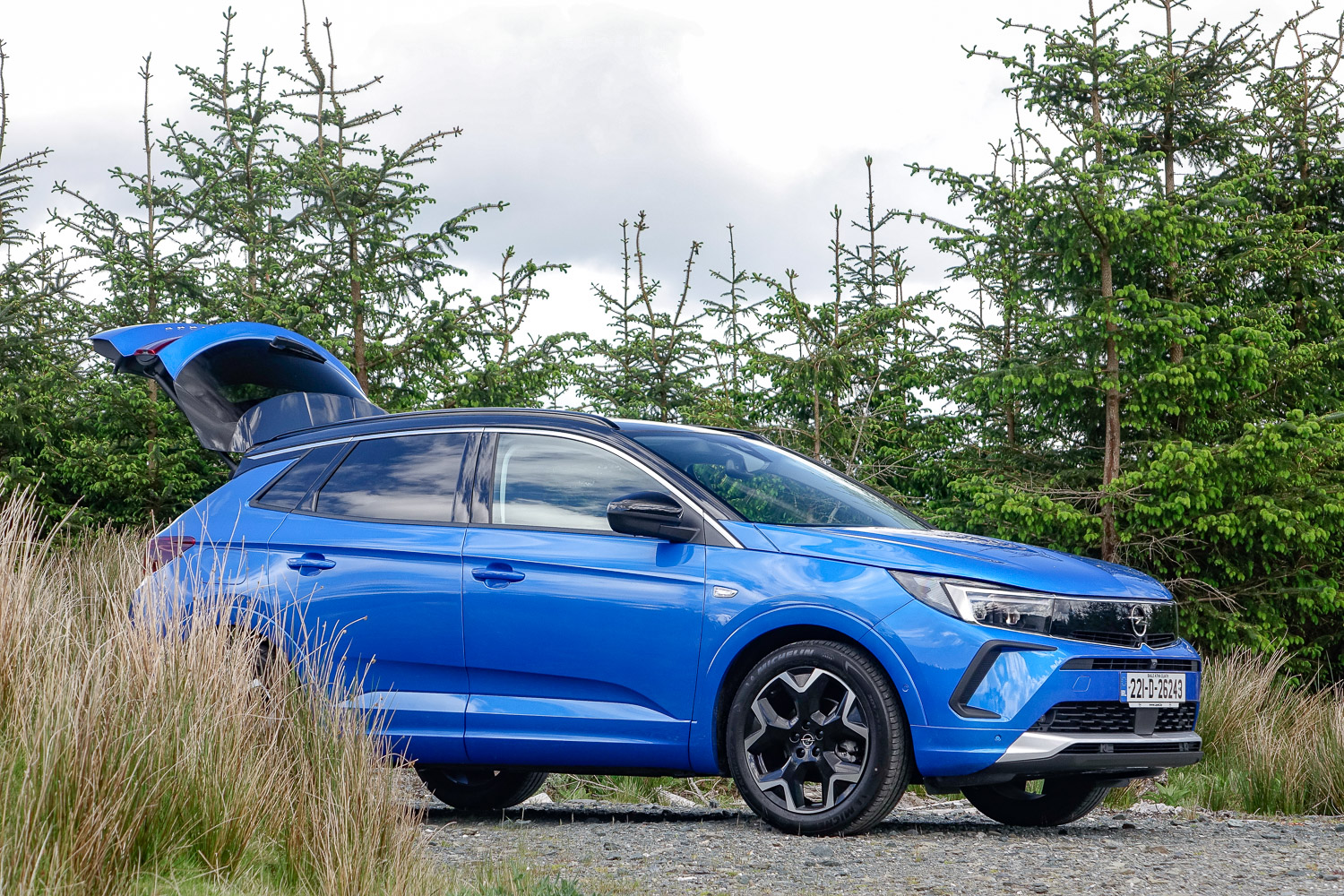 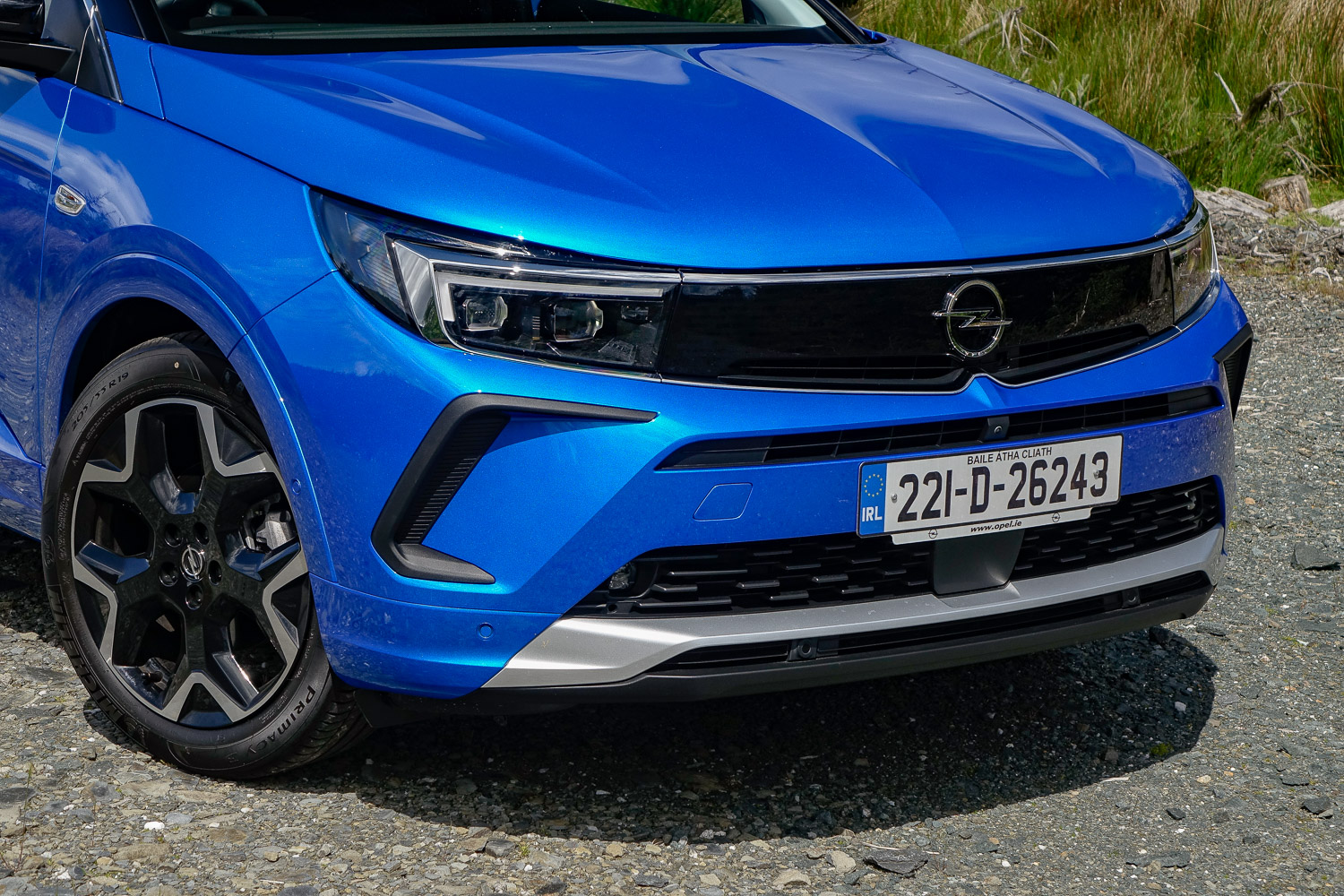 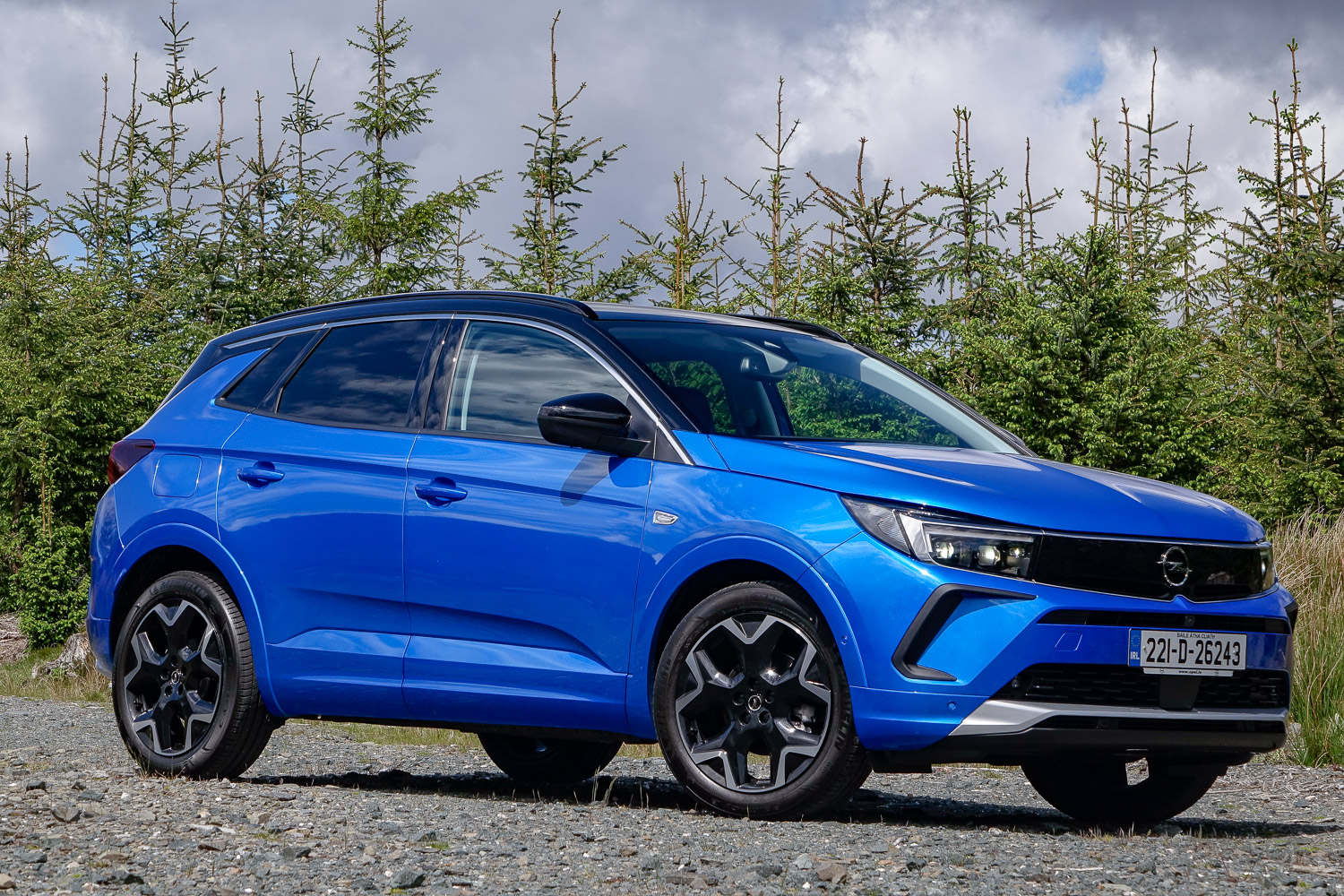 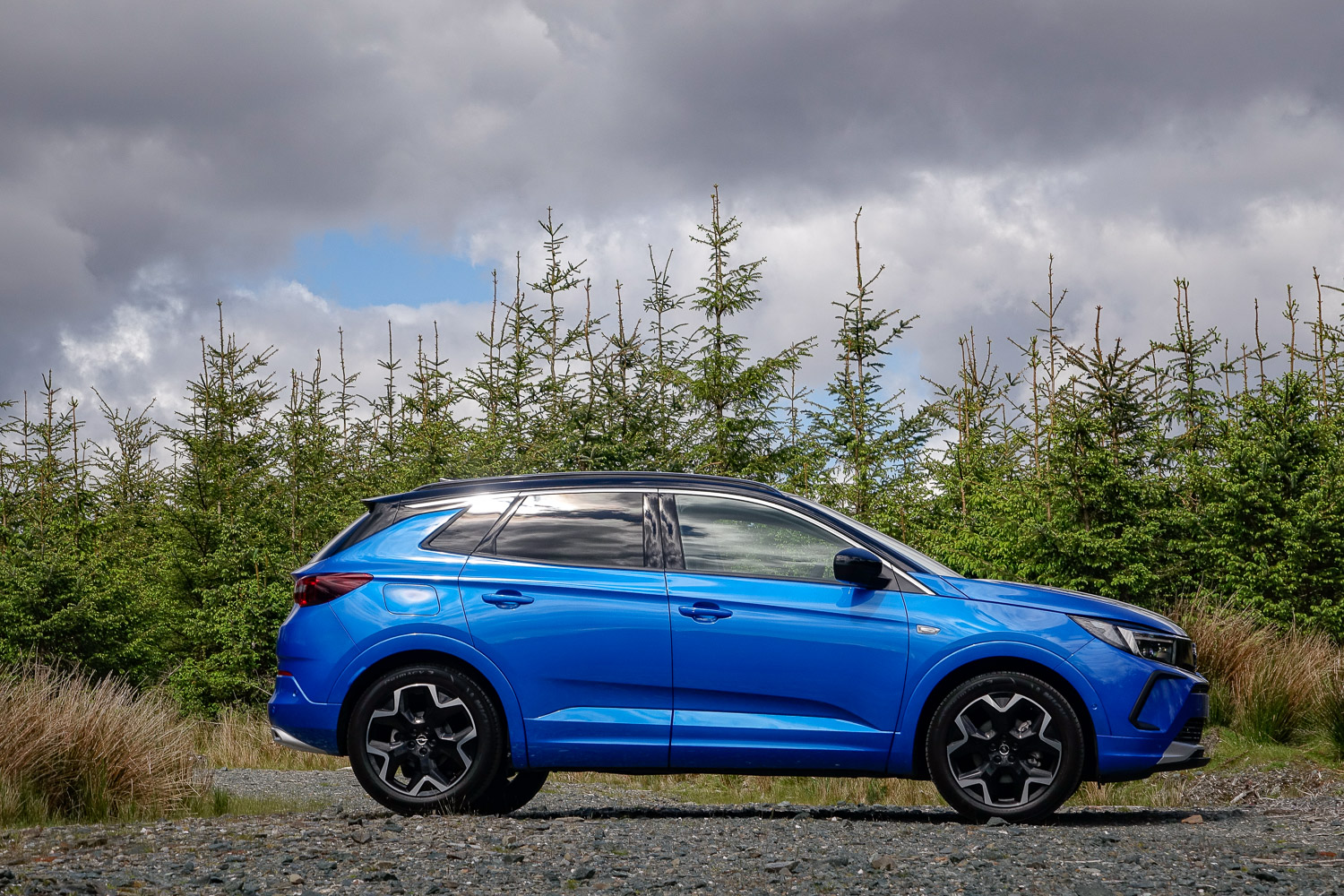 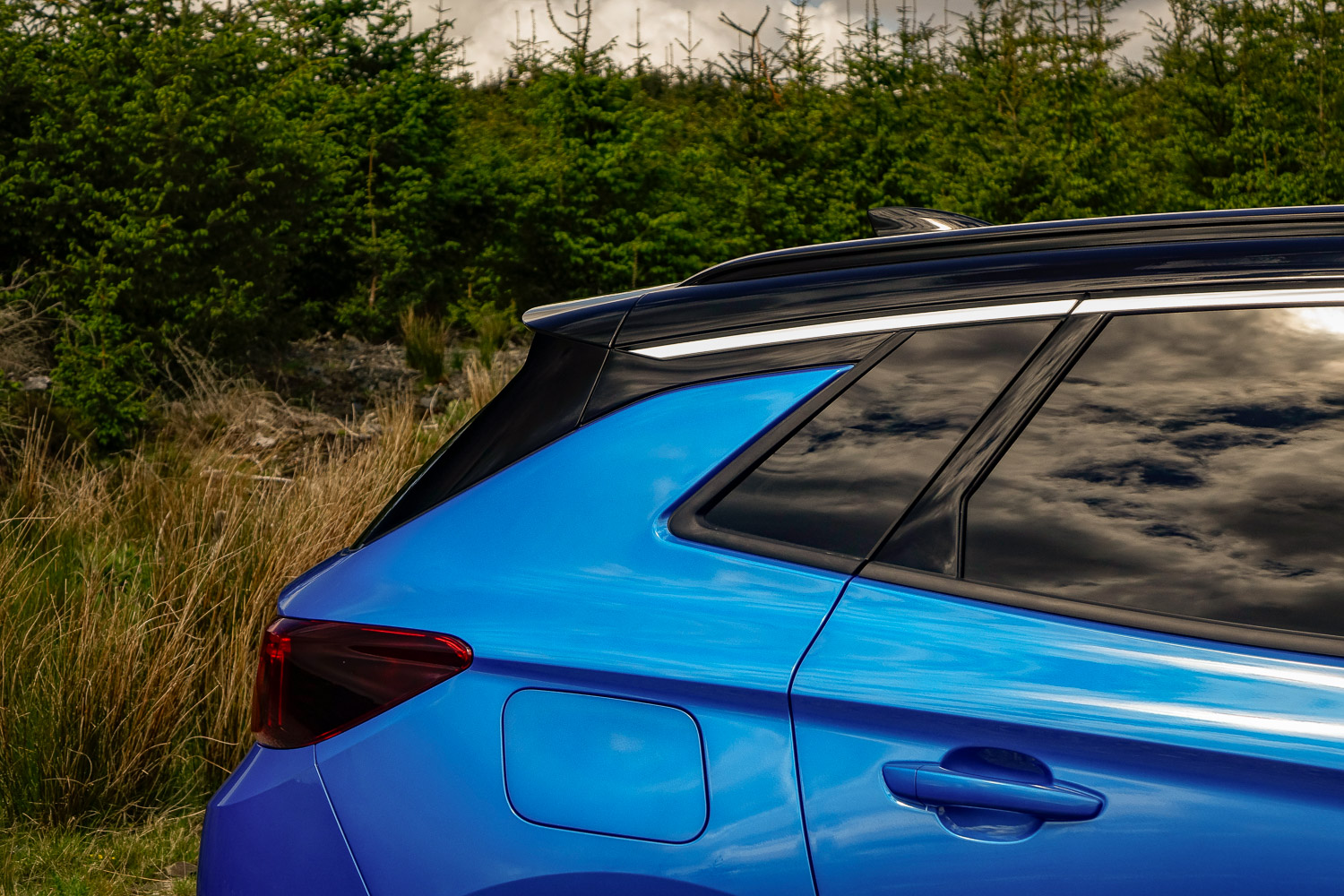 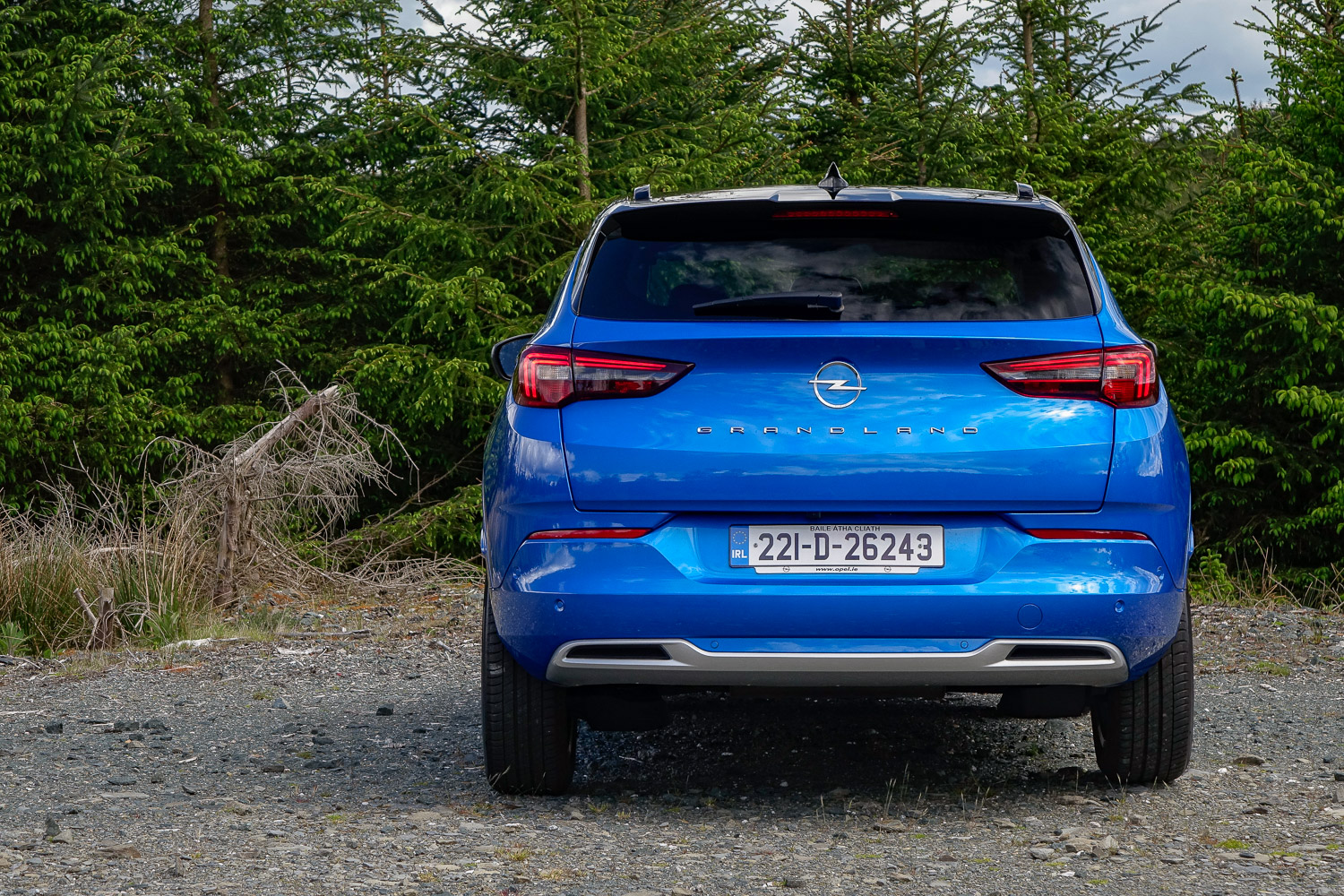 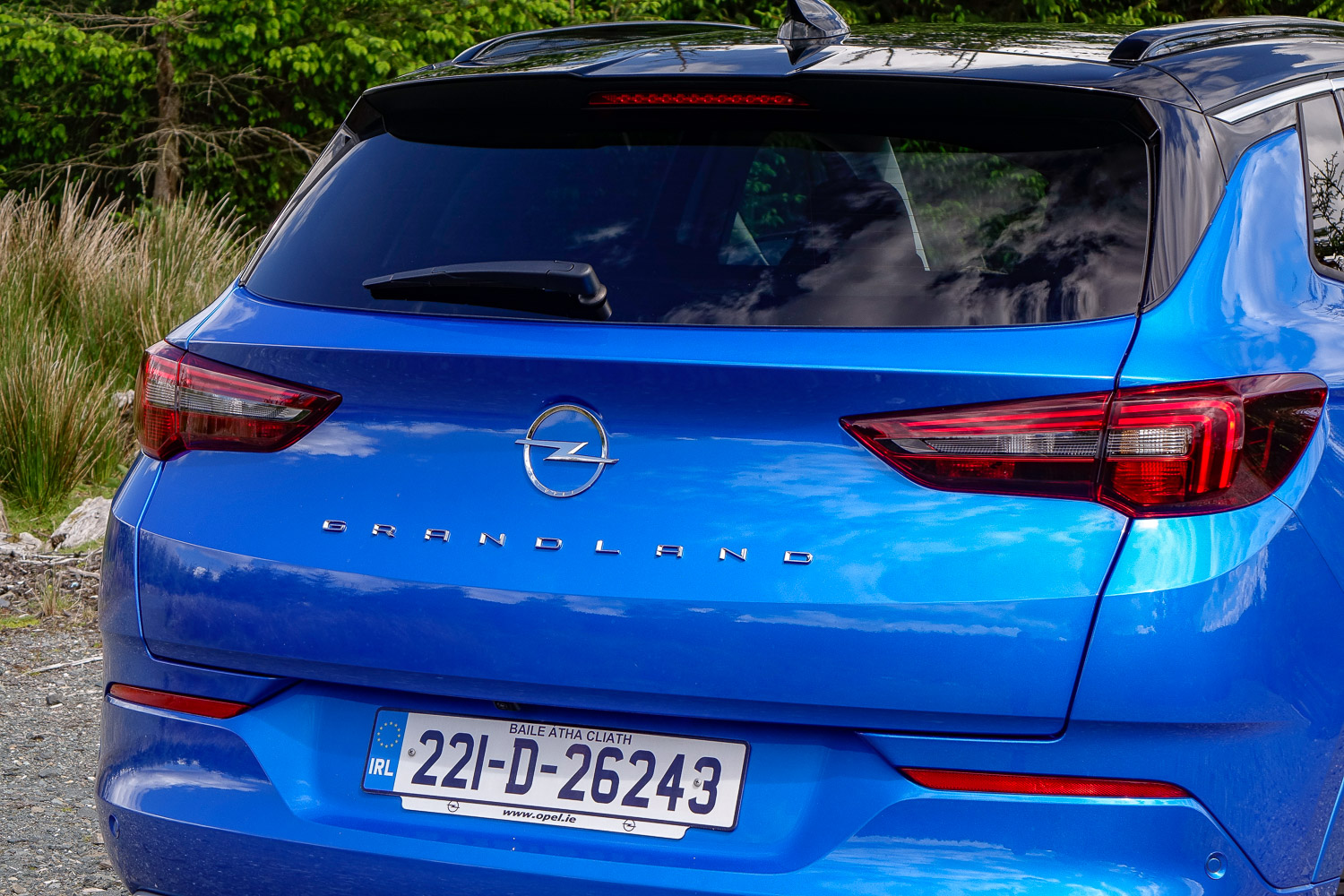 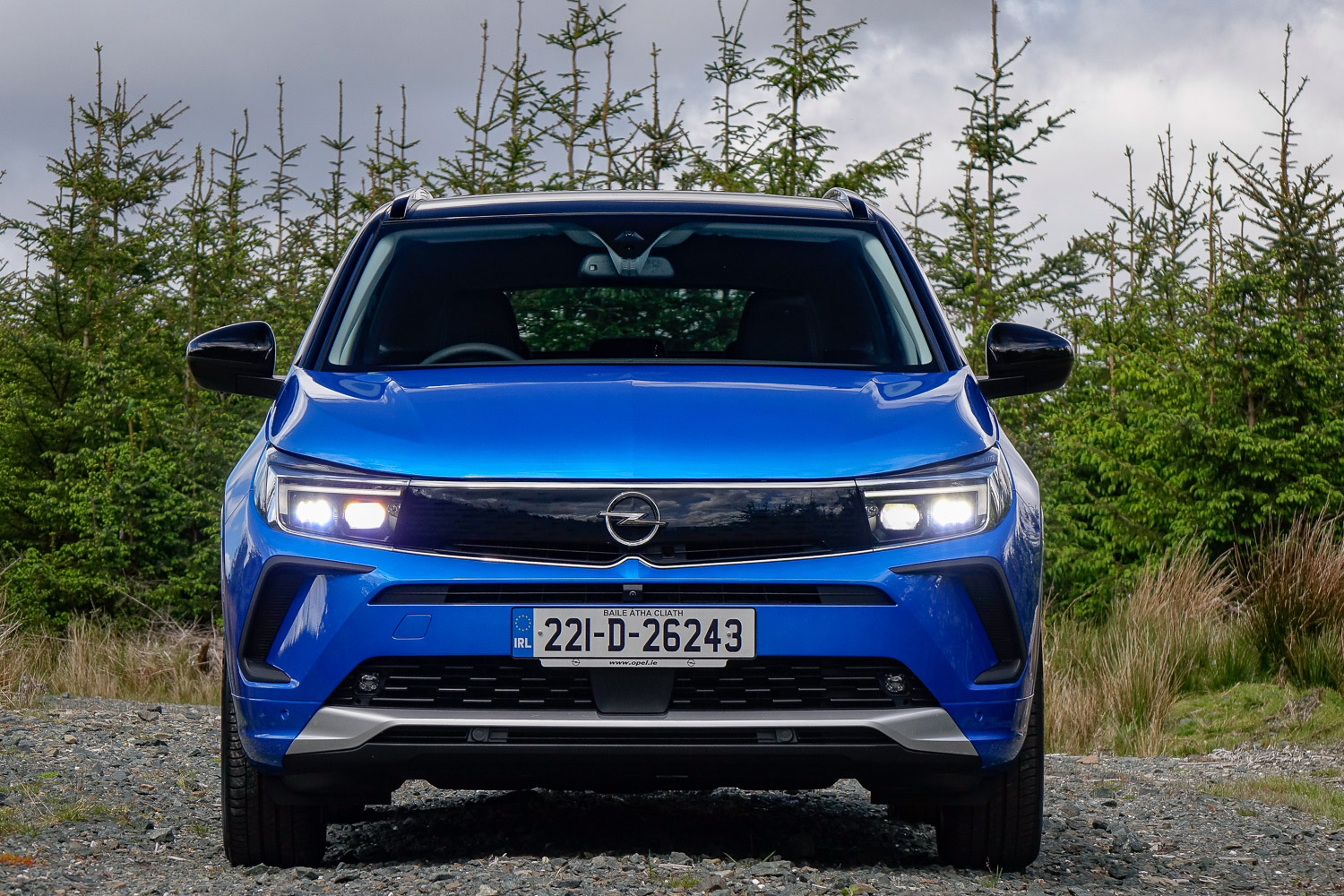 The Grandland is a slightly in-between-y car, being as Opel originally developed it when it was still part of US giant General Motors. The Grandland (or Grandland X as it was called then) was developed using a chassis and engines shared with PSA Peugeot Citroen, as part of a general engine-and-tech sharing deal between the two companies. But during the car's genesis, GM sold up in Europe, and Opel was bought, lock, stock and barrel by PSA Group. PSA itself then merged with Fiat-Chrysler to form the vast Stellantis car making group.

So, the Grandland was originally a GM project, made using PSA input, which then became a fully PSA car, which is now made by Stellantis. Everyone got that?

For 2022, the Grandland has been treated to a round of updates, the most obvious of which is the new 'Opel Vizor' nose. Originally created for the Mokka crossover, Opel has been adding the 'Vizor' nose (which is inspired by the styling of the Opel Manta Coupe from the 1960s) to all of its range. Arguably, here on the Grandland, it looks a bit more obviously stuck-on, rather than integrated into the design from the outset, but it's still rather more handsome and distinctive than the slightly bland original.

Inside, the Grandland has been given the all-digital 'Pure Panel' dashboard, as shared with the Mokka and higher-end versions of the smaller Corsa hatchback. It uses two digital screens for instruments and infotainment and, as with the 'Vizor', looks rather classier and more up to date than the plain analogue dials of the old model.

Are these updates enough to keep the Grandland feeling fresh against competition from the likes of the new Nissan Qashqai, Kia Sportage and Hyundai Tucson?

The only meaningful change to the Grandland's mechanical line-up in the 2022 update has been the inclusion of an extra plug-in hybrid model. Previously, the only PHEV was a 300hp, four-wheel-drive range-topper, but now Opel has introduced a more affordable front-wheel-drive version, with a still impressive 225hp.

Elite trim comes with keyless entry and ignition; heated seats front and rear, and a heated steering wheel; an electrically heated windscreen; electric adjustment for the front seats; rear centre armrest; leather upholstery; 19-inch alloy wheels; and a powered tailgate. Our test car also came with optional Night Vision, which projects an image from a forward-looking infra-red camera onto the dashboard when it's dark out, and that costs €1,500.

At the time of writing, Opel Ireland had not yet published details of its PCP finance offer for the updated Grandland, but check the official website for up-to-date information.

There's no doubt that the addition of the 'Pure Panel' digital dashboard has lifted the ambience of the Grandland's cabin. Previous models with the analogue dials look rather old-fashioned, and the new full-width screen setup looks much more modern.

The instrument panel uses a very minimalist layout, which is relatively easy on the eye, but doesn't look as graphically rich nor expensive as that deployed by some rivals. Meanwhile, the centre screen uses an older version of the PSA Group operating system, so while it's effective, some of the menu layouts take a while to get used to, and the resolution of the reversing camera could be better.

Thankfully, though, Opel persists with fitting old-school physical controls for the heating and air conditioning, which is far less fiddly than on-screen systems from some brands.

Overall cabin quality is generally very good, although you will find some cheap plastics without looking too far. In terms of storage, there's a lidded space under the armrest between the front seats, which is where you'll also find the wireless phone charger, if fitted, and there are spacious door bins. There's a small-ish lidded compartment ahead of the gear shifter, and another storage area in front of the armrest, which has a removable cupholder section. As well as the expected USB connectors, you also get a 12-volt socket.

On this Elite-spec model, the front seats are excellent, and have been approved by the German AGR, or Aktion Gesunder Ruken - the Bad Back Society. There's a manual seat cushion extender, and on long journeys (including a run from Belfast to Cork and back) they proved supportive and comfortable. Space in the back seats is good, although the centre rear seat is a little too narrow to be of much use for adults. There are three ISOFIX points though: two in the rear seat and a third in the front-passenger seat (which has an airbag cut-off switch).

The boot, at 500 litres, is a decent size (although in the hybrid versions that drops to 390 litres), and there's a flat loading floor. The rear seats split-fold 60:40, and there's a central 'ski-hatch' for long, narrow items.

You wouldn't necessarily think that a little 1.2-litre engine could easily haul around a car as large as the Grandland, but actually the three-cylinder unit is more than up to the task. With two-up and luggage, there was no sense of any struggle nor any fall-off in performance, and while you'd never describe it as fast, it feels punchier through the mid-range than you'd expect. The six-speed manual gearbox is a little long of throw, though, so you might well be better advised to go for the excellent eight-speed automatic. We also found that the Grandland's pedal box was a little narrow, so if you've got big feet, that's another reason to go for the auto.

Fuel consumption worked out very close to Opel's official figure of 6.2 litres per 100km, as we averaged 6.5 litres per 100km, which with largely motorway driving didn't seem too bad. Certainly, the diesel would do better on these sorts of journeys, and the plug-in hybrid would be better in urban situations, but as a compromise between the two, the 1.2 does just fine. It's also reasonably refined, and makes a pleasant three-cylinder 'thrum' when you accelerate hard.

Not that it's the kind of car that would be expected to be pushed to its limits. The steering is relatively quick and feels quite positive, but you soon run out of front-end grip if you start driving with much enthusiasm. Also, if you're tempted by the top-spec Elite version, make sure you test drive it on a bumpy road to ensure that you're happy with the ride comfort - smaller wheels would be better in that regard.

On longer runs, wind noise is well-contained, and there's not too much tyre roar, even on coarse concrete surfaces, so the Grandland is an accomplished cruiser, just as you'd expect of a German car, really...

Our verdict on the Opel Grandland

As we said at the top, the Grandland is an in-between-y car, and you can sense that, but Opel's updates both in terms of styling and tech have been well-judged, and it's very well-equipped (especially in safety terms) for the money. It's not thrilling to drive, but it's a solid and sensible family SUV.

Hyundai Tucson Hybrid (2021) review
Hyundai Tucson vs. Opel Grandland 1.2 petrol (2022): Ireland's best-selling car, the Tucson is stylish, roomy, and not bad to drive. You get a choice of petrol, diesel, mild-hybrid, hybrid and plug-in hybrid powertrains. 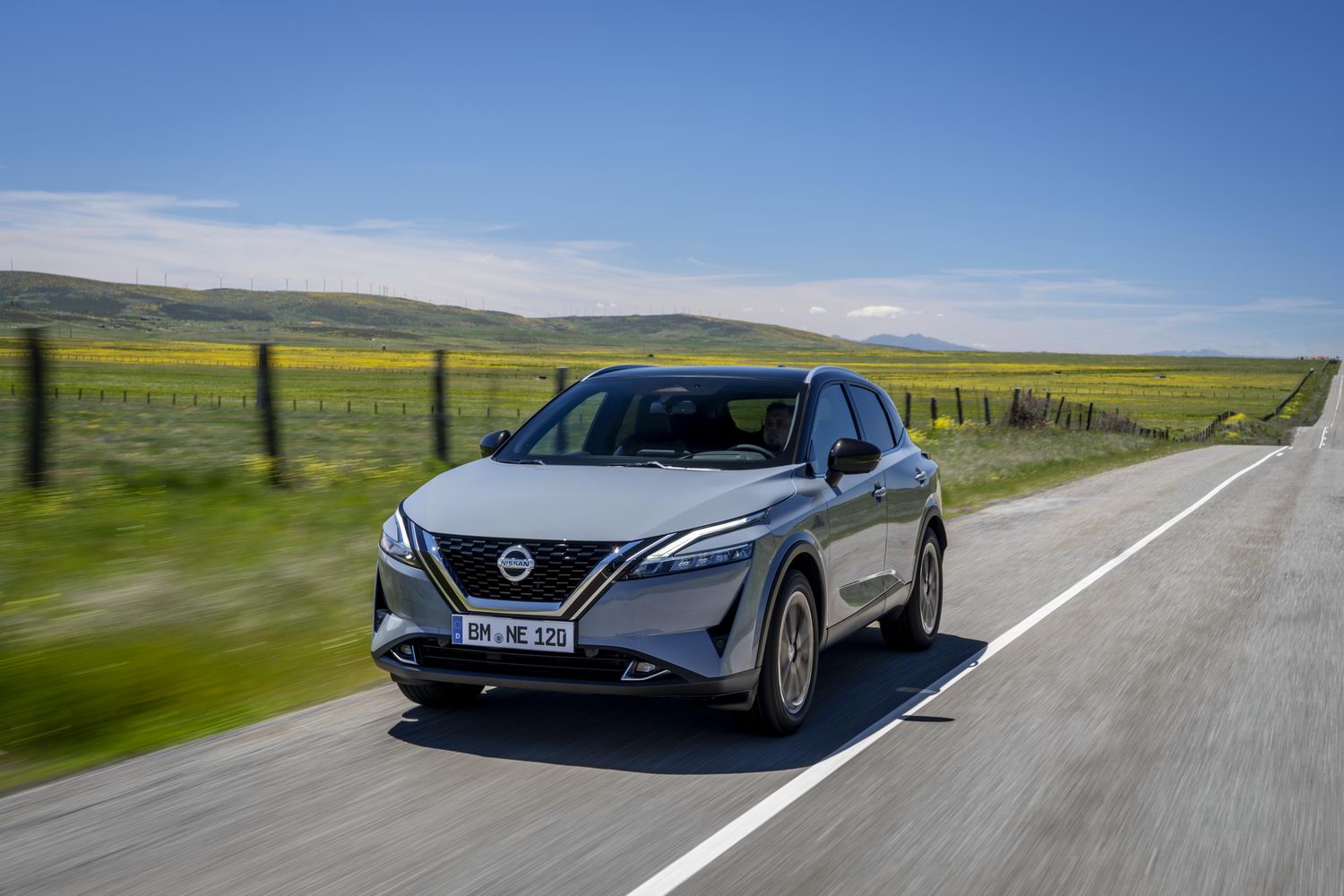 Nissan Qashqai 1.3 petrol (2021) review
Nissan Qashqai vs. Opel Grandland 1.2 petrol (2022): better looking and with a roomier interior than the old one, the Qashqai is still one of the default choices in this segment, and it's not hard to see why. 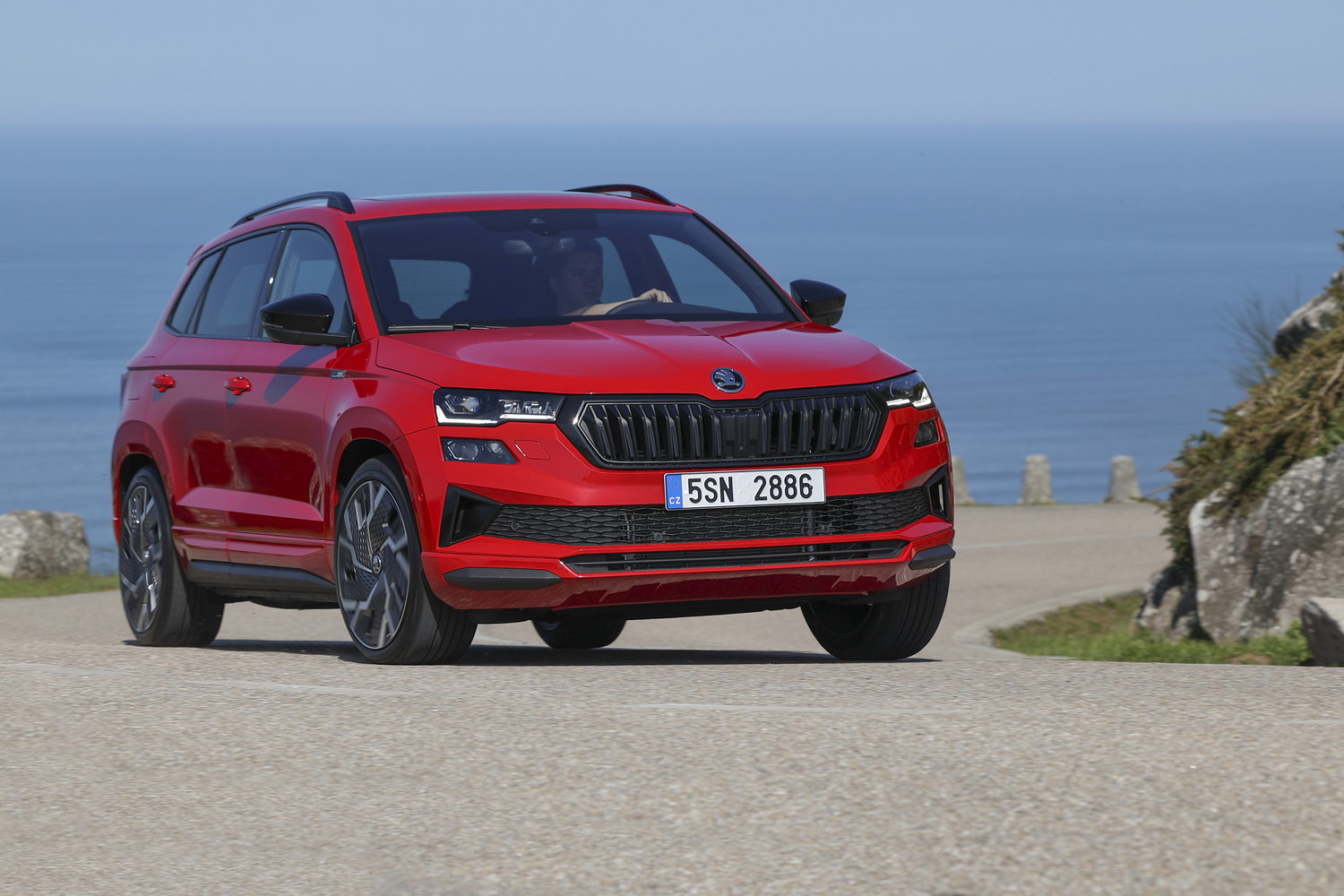 Skoda Karoq 1.5 TSI petrol (2022) review
Skoda Karoq vs. Opel Grandland 1.2 petrol (2022): just updated, the Karoq is as plain as vanilla, but it has a big boot, a well-made cabin and is sharply priced. No hybrid versions, though.