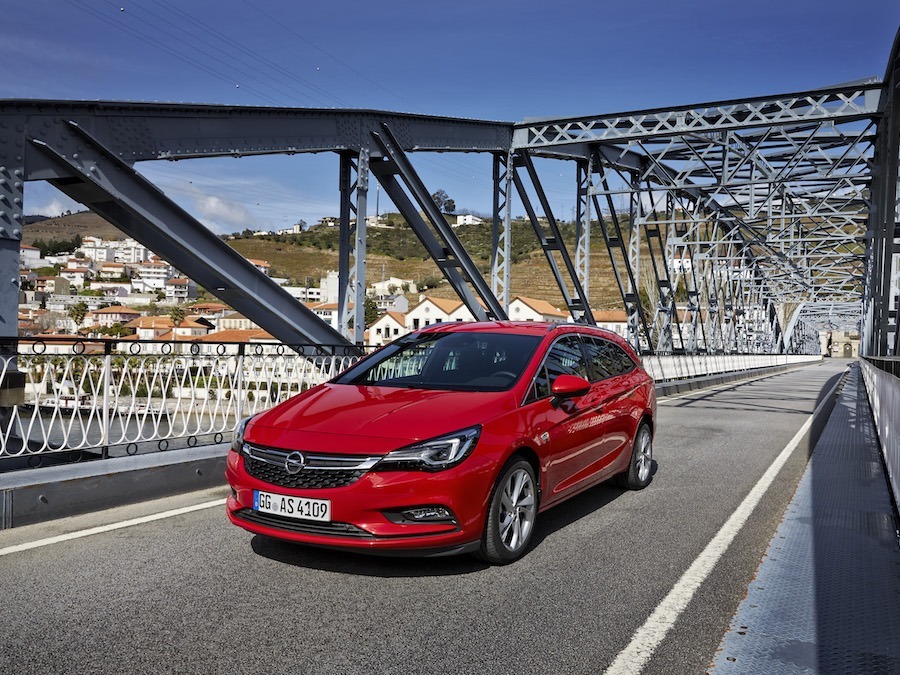 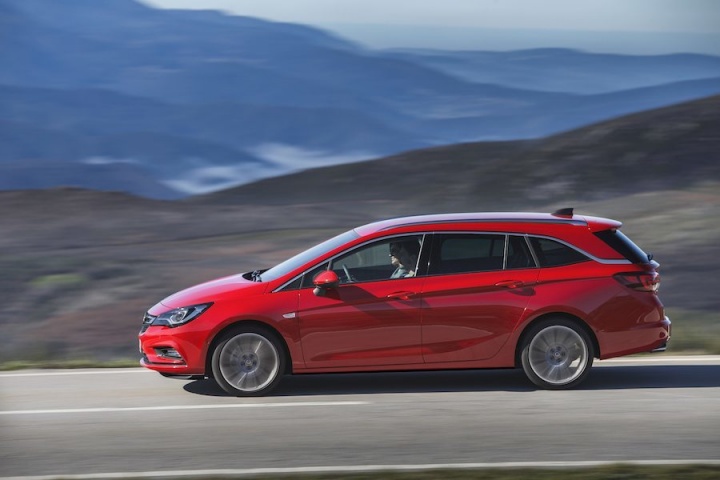 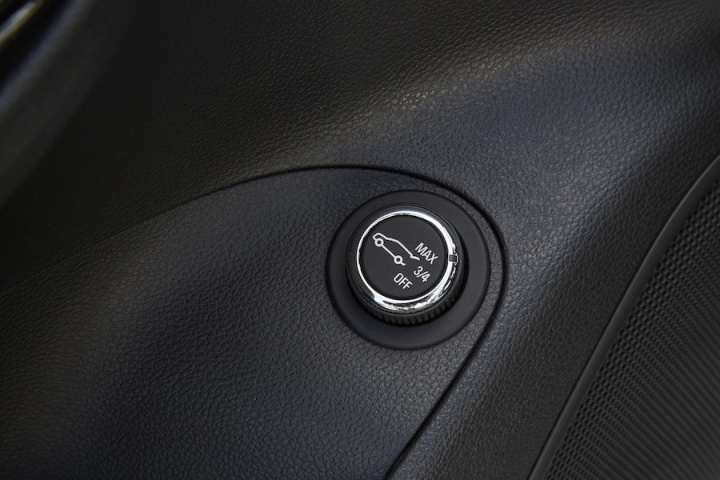 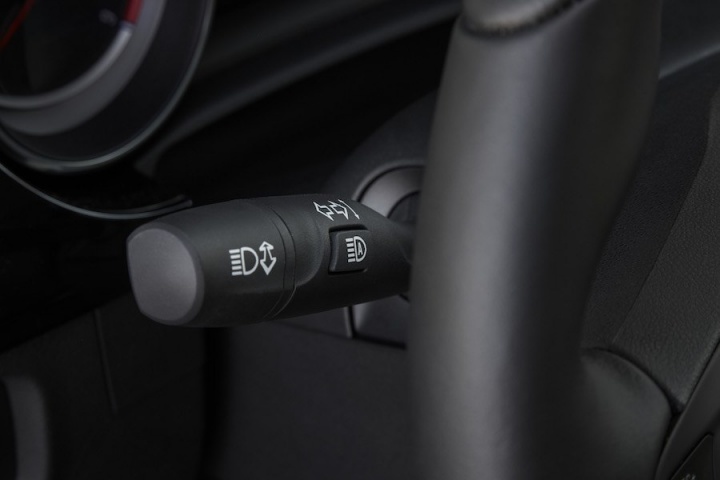 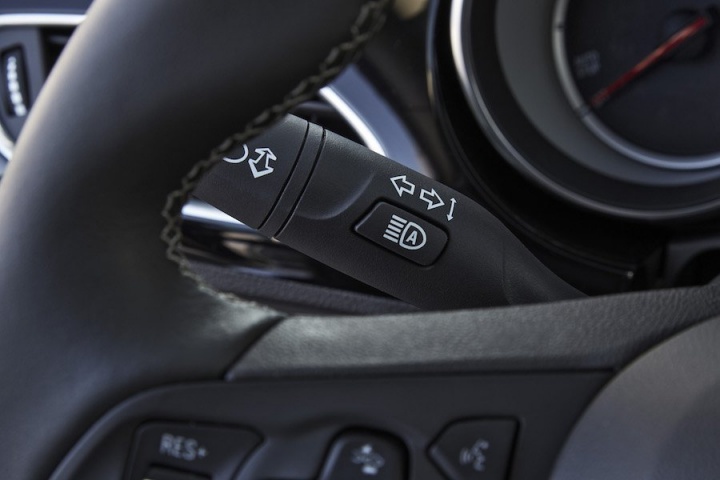 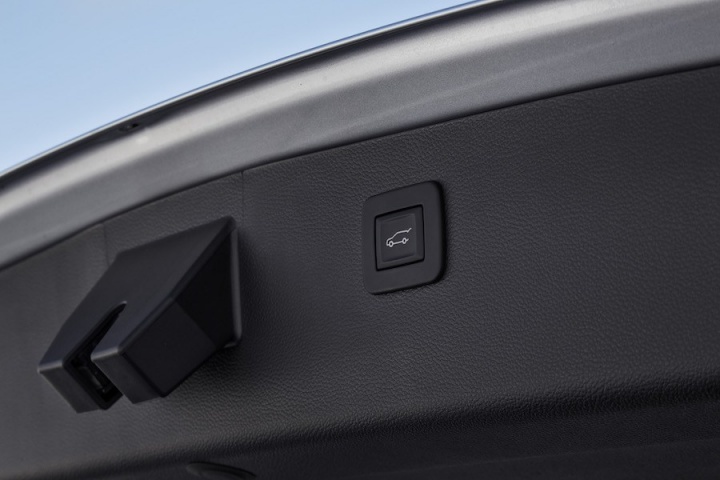 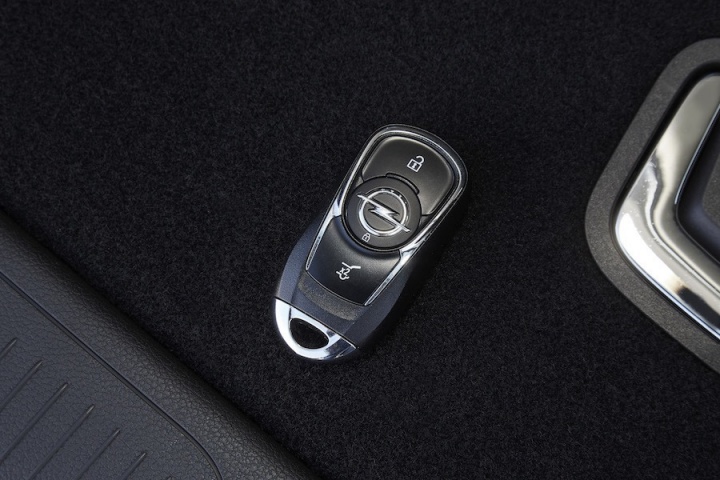 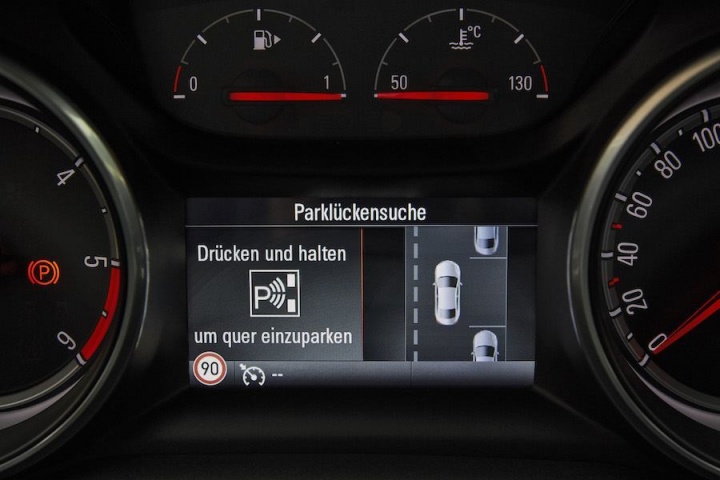 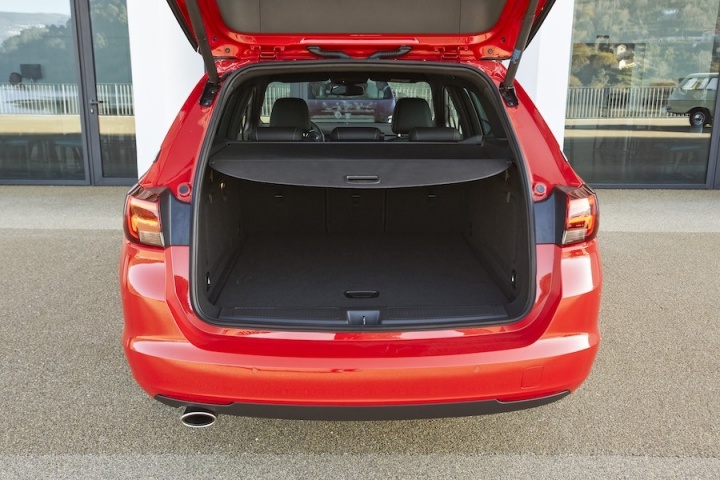 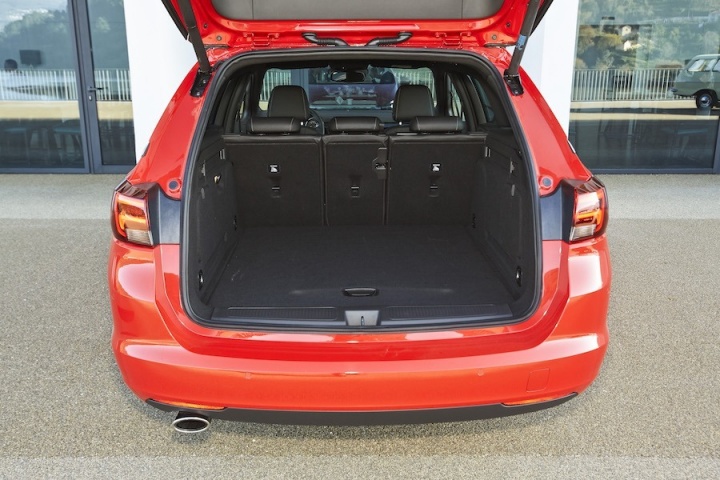 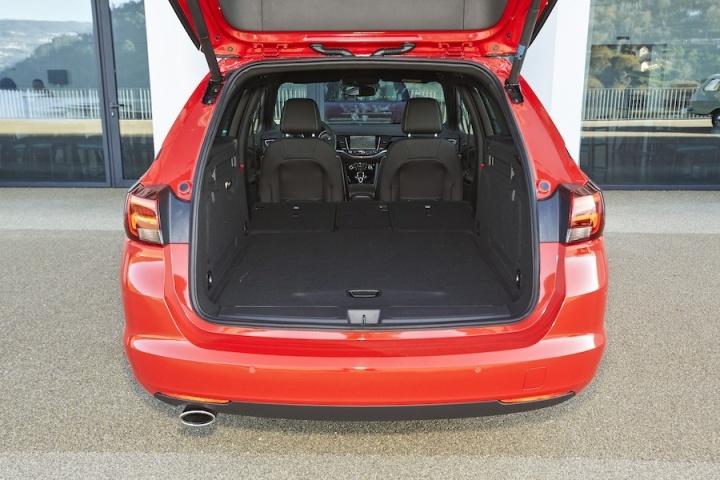 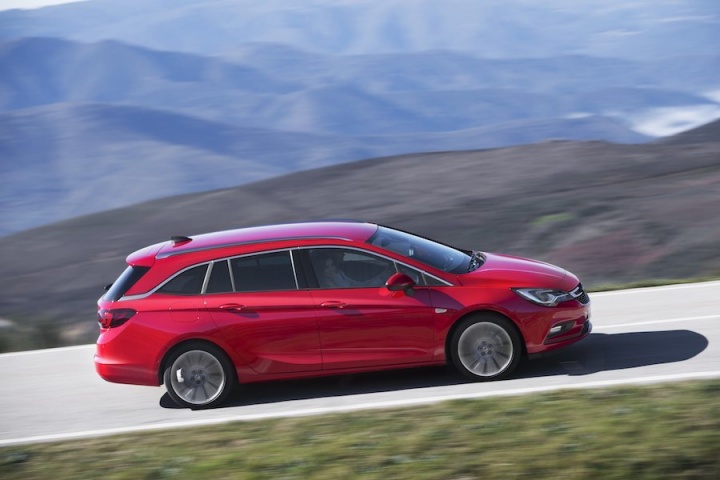 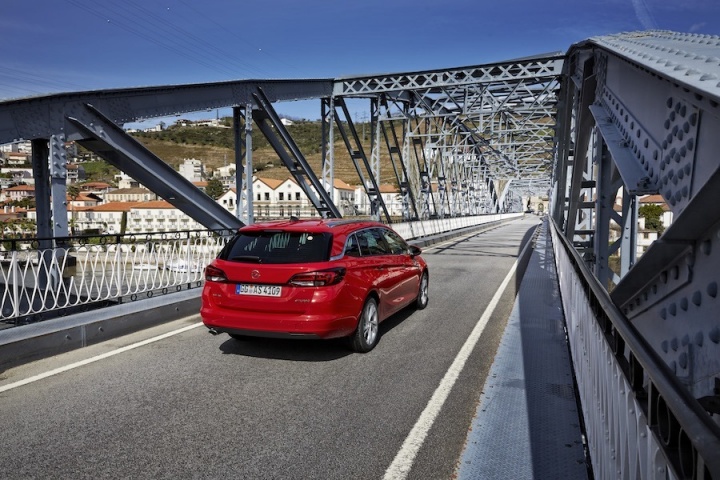 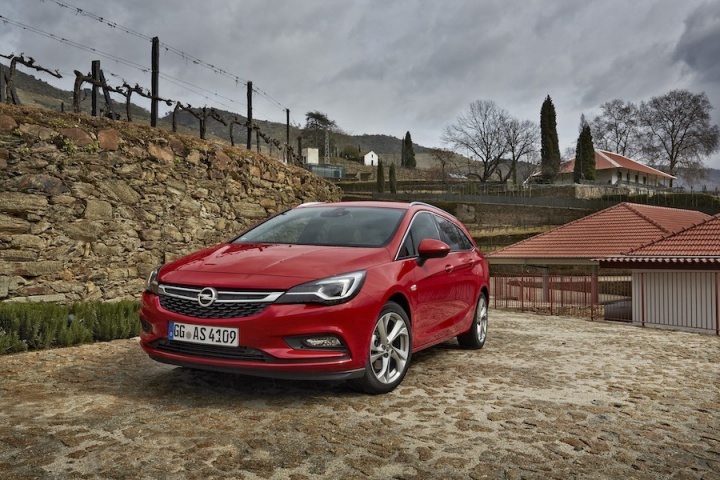 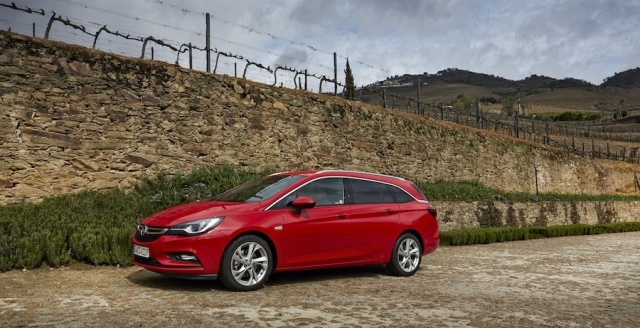 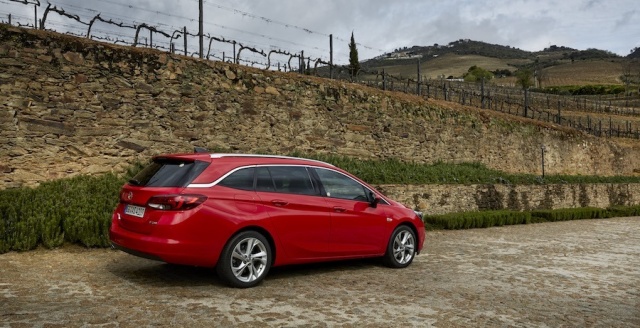 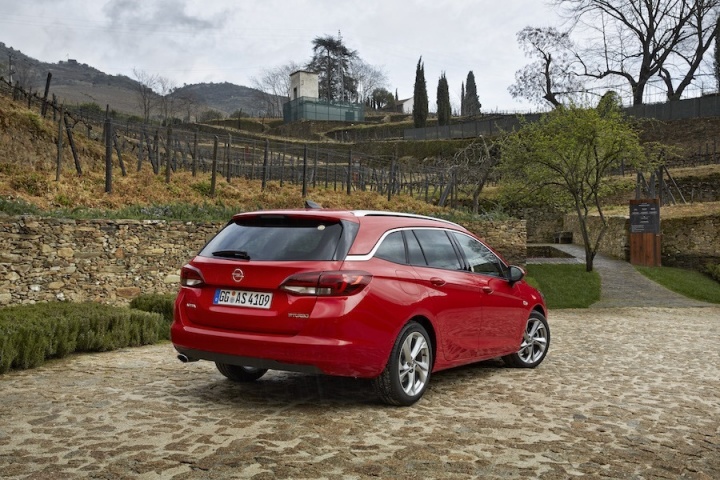 We review the estate version of the excellent Opel Astra Mk7.

Opel's Astra won the European Car of the Year Award on the eve of the Geneva Motor Show this year, so what better time to drive the estate version of this impressive C-segment challenger than right now? The new Astra Sports Tourer is a fine, competent machine with a beautiful interior, plenty of space... and a cracking new biturbo diesel engine.

As you may or may not know, the Opel Astra Mk7 is based on the Mk6 platform, but with heavily revised looks. For the hatchback, that means the wide, 'wing' graphic front grille and new headlight clusters, more angular and attractive tail lamps, and that neat C-pillar treatment that makes it look vaguely coupé-esque in profile. For the Sports Tourer estate, you lose the last two of these features, which we accept is inevitable, but which we still think is a shame. Opel has tried to maintain a 'floating D-pillar' by sweeping some chrome through said structure but it doesn't work as well as the design flourish on the hatchback, while the wagon's rear lights are less distinctive than the hatch's units. The Sports Tourer is still an attractive thing overall, though, sitting alongside the SEAT Leon ST and Peugeot 308 SW as our favourite compact estates in terms of visuals.

Inside, the same brilliant new interior wows you with the marked step up in quality compared to the old Astra. It's so, so much better within, thanks to plenty of piano black trim, far fewer buttons littering the main control areas and a genuine feeling that some high-end materials were used in its construction. Yes, Opel still favours dark materials for the cockpit, but thankfully the Astra's cabin never feels oppressive and dour. Out the back, of course, is the Sports Tourer's USP - a 540-litre boot (compared to the hatchback's 370 litres) can be expanded to a colossal 1,630 litres with the rear seats folded. Capacious.

Like the hatchback, extensive lightweight build tech techniques employed in the Sports Tourer's construction has seen Opel shed up to 190kg from the weight of the wagon when held up against its Mk6 father, which goes a long way to improving both the dynamics and the economy. So such a loss of fat should be further exemplified by this new engine. It's a twin-turbo version of the 1.6-litre CDTi 'Whisper' diesel, adding 24hp and 30Nm to the outputs to leave us at 160hp at 4,000rpm, with a meaty 350Nm spread across a wider rev range than the single-turbo unit, the BiTurbo churning out its torque from 1,500- to 2,250rpm. The only giveaway that you've got an extra turbo on your CDTi is a two-tone 'BITURBO' badge on the boot lid, though as yet this engine is not on Opel Ireland's pricelist.

There's very little to tell you that you're behind the wheel of the Sports Tourer version of the Astra, rather than the hatchback - but this is a good thing. The estate preserves all of the regular five-door's excellent manners. That means you get clean, tidy and reasonably involving handling when you press on, coupled with Opel's historic strong suit of a comfortable cruising demeanour. The rear suspension doesn't seem to be noticeably bouncier than the hatchback's set-up, and the general levels of wind noise and tyre roar remain identical.

The BiTurbo is rapid, though. Its stats might have it a little behind the likes of the Volkswagen Golf GTD Estate, for example, but when you consider the Opel is wading into battle with a 1.6-litre unit, rather than a 2.0, it puts GM's excellent work into perspective; we're considering this as a pseudo-performance estate car in the ilk of the GTD, a far more expensive proposition.

Working in a sequential manner, the BiTurbo has a smaller turbocharger for low-revs response, before a larger turbo takes over the high-speed, high-power duties. The results are deeply impressive. The BiTurbo never struggles for pace, nor does it become noisy and harsh if revved hard, and it isn't blighted by torque-steer or understeer. There's negligible turbo lag and an abundance of throttle bite when you're in higher gears at low revs, and it always feels much more urgent than the 136hp single-turbo CDTi, itself no slouch. Hopefully this engine will be offered for sale here, in the hatchback as well as the new estate.

What marks the Astra out is Opel's OnStar connectivity and personal assistance service that is fitted to the higher grades of Sports Tourers, with which you can call up for navigation settings and the location of points of interest - this data provided by a team of 24/7 customer service assistants. Further 'big car' kit comes in the form of optional IntelliLux LED headlights, which can automatically dip certain parts of the main beam to prevent dazzling other road users. From our personal experience, this Opel system is one of the best in the automotive industry; it works extraordinarily quickly and effectively.

Ford Focus Estate: facelifted in 2014, but the Focus Mk3 is getting on a bit now. Astra has the nicer interior, engine and infotainment system.

Kia cee'd Sportswagon: Kia's superb warranty always makes the cee'd worth a look, yet the Opel now feels like a clear cut above the Korean in terms of quality.

Peugeot 308 SW: if you can get on with the i-Cockpit dashboard, the 308 SW makes for a classy wagon, in the same comfort-oriented vein as the Astra.

We're not as big on estates over here as they are in the rest of Europe, but the Opel Astra Sports Tourer remains worthy of serious consideration. Like the new hatchback, it's a classy and elegant machine that's streets ahead of its predecessors and genuinely capable of challenging the class leaders. Its rear-end styling isn't quite as attractive as the five-door Astra's, but the Sports Tourer counters with a simply huge boot. The icing on the cake (if it comes to Ireland at a reasonable price) is the superb twin-turbo 1.6 diesel, which is a gem of an engine. In the C-segment estate marketplace, this new boy is already among the very front-runners in its class.