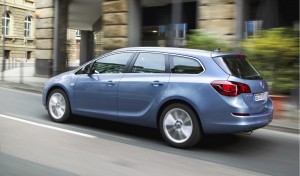 Has the Opel Astra Sports Tourer enough to persuade us out of our compact SUVs?

Opel's five-door Astra is already a good-looking car, if perhaps a little bit restrained when compared to the three-door version that is set to come. The Sports Tourer is aimed at being half way between pretty and practical.

At the front it is very much business as usual with this load-lugging version of the Astra. There is the distinctive front grille, lights and bonnet crease that make it unmistakably an Astra, but it is not until the B-pillar that things start to look different. A single window graphic tapers towards the D-pillar and a strong shoulder line ends with a pretty, sculpted tail light . There are long, slim roof bars that join up with a wide roof spoiler, which is integrated into the top of the tailgate. The now signature 'blade' motif is sculpted into the side of the body ahead of the rear wheels.

As you might expect, the main focus for this car is the load area and the Astra Sports Tourer features the FlexFold rear seats that allow the load area to be increased from 500- to 1,550 litres with the push of one button. The Easy Access Cover slides upwards and out of the way with a simple tap too.

There are additional optional extras available such as a Luggage Compartment Liner, which protects the cargo floor carpeting, the tailgate opening, the rear bumper and the lowered seat backs. There is also a FlexOrganizer storage system that allows the configuration of cargo space, and another option is the FlexFix bicycle carrier system that will be available in 2011.

We tried two engines on the launch, the 1.4-litre turbocharged petrol unit with 140hp and a 2.0-litre CDTi turbodiesel engine with 160hp. These will make up a choice of four diesel and five petrol engines with power ranging from 95- to 180hp.

Petrol fans get a 100hp naturally aspirated 1.4 at the base level and two turbocharged 1.4-litre engines with a choice of 120- or 140hp - although Irish buyers won't get the 120hp version. The petrol range is topped by a 1.6-litre turbocharged unit with 180hp.

FlexRide adaptive dampers were fitted to all our test cars and they were needed at times - especially Tour mode, which is more forgiving. This is an option costing between €1028 - €1,146. It's worth the money and it gives the car a nice dual personality.

It is unlikely that many buyers will go for the 1.4-litre Turbo petrol, but they are probably missing out on the best engine as a result because it is really very peppy and the emissions aren't that bad either. The 140hp version emits just 144g/km, meaning it sits in Band C.

Prices for Astra Sports Tourer won't be published until closer to the on-sale date of the car, but we do know that it will have the same grading structure as the five-door hatchback so that means S, SC, SE, SRI and Elite models. These range from the pretty basic, in the S versions, to the full bells and whistles Elite.

Pricing is likely to start at around €21,925 for the S grade 1.4-litre 100hp Sports Tourer, increase to €23,475 for the same grade with a 1.3-litre CDTi engine and cost around €24,225 for the 110hp 1.7-litre diesel, which Opel reckons is likely to be the big seller. Although as yet we aren't sure what the popularity of the Sports Tourer is likely to be, since the estate market is a tiny segment in Ireland.

The difficulty may be that once you get to the middle- or high-grade cars with the right engines then you are competing in price terms with the likes of the Nissan Qashqai and the Hyundai ix35, which offer people space and SUV versatility for hatchback money.

What you won't get from an SUV is the handling ability that the Astra boasts. Opel has really done a good job of setting this car up . The rear axle benefits from a combination of a compound crank and Watt's link and this supports lateral forces during cornering to provide really agile handling and great stability. It also saves space. Of this type of car, the Astra Sports Tourer is definitely one of the best to drive.

The Astra Sports Tourer quite simply offers more space and versatility to would-be Astra owners. While in some markets, such as Germany, it will make up some 50 percent of sales, in Ireland it is likely to reach only a small number of buyers, which is a shame really. The immense and growing popularity of the compact SUV is the main reason for this and it is unlikely to change anytime soon.