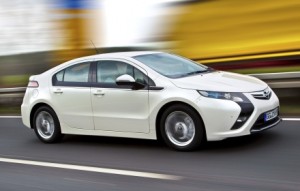 Opel's new Ampera offers the perks of an electric car without the so-called 'range anxiety'. We've driven an early prototype.

We've had petrol; we've had diesel; we're even used to the idea of a hybrid. Then we had to learn about electric cars. Now, there is another category to get your teeth into, the E-REV, or Extended Range Electric Vehicle. The concept seems simple enough. You have a battery that can be charged via a domestic plug in three hours for about 60 kilometres of emissions-free electric motoring; when this runs out, you don't just stop, as there's a conventional engine to take over generate electricity to power the electric motor, providing an extra 500km of range. Could the Opel Ampera be the perfect interim answer to the drawbacks of electric cars?

The Ampera is a handsome thing, managing to look quite aggressive despite its supposed eco-friendliness. This is something that could never be said about the slightly cartoon-like Toyota Prius and Honda Insight. There are similarities between the Opel's rear styling and those two cars, presumably to optimise aerodynamics.

Our test car was a prototype so as such might not reflect the final production car, but we imagine that most of the styling cues will be carried over. The interior, while quite rough, ready and functional in our test mule, did give an indication of what is to come, with a futuristic-looking dashboard, gearlever and centre console.

There is a large digital display dominating the centre console showing a multitude of information you need to know relating to energy levels, air conditioning and the like. There are still quite a lot of small buttons on the dash though, which might not make it to the production car, as they are pretty fiddly and somewhat hard to see. In front of the driver, where you would find dials in a regular car, is a large display that shows speed and energy levels - you can also monitor when you are using energy through acceleration and also when you are restoring it through brake energy regeneration.

The Ampera is a four-seater, the centre seat in the rear lost to the packaging of the battery. With two tall drivers up front, rear leg room is fine for rear seat passengers, but headroom is limited by the sloping rear roof.

We know very little about the pricing of the Ampera as yet, because it is still quite far away comparatively speaking. A good estimate is €30,000 including a Government grant of €5,000, putting the Ampera into direct competition with the Nissan LEAF and Renault Fluence EV. It should be pretty generously equipped out of the box, so as to make the relatively high purchase price a little less hard to swallow. Expect things like 17-inch alloy wheels, satellite navigation, cruise control and climate control all thrown in as part of the package. Opel appears to be ruling out any sort of lease deal for the battery though, saying that this isn't the intended business model. Instead the car will be bought outright and Opel expects the battery to be good for around 10 years of use.

The car we drove was prepared so as the battery charge was almost depleted, so we got to experience electric-only power and the extended range functionality. Much like most of the new breed of EVs, running on battery power alone the car is very silent, powerful and altogether relatively normal. There is a faint whine from the drivetrain, and the test car was also, rather oddly, fitted with snow tyres that caused a fair amount of road noise. However, the Ampera was contented sitting on the motorway at about 140km/h. When the battery depletes, a gauge on the dash alerts you that you are switching over to extended range mode and the petrol engine can be heard kicking in - though it isn't as loud as a standard car's.

It feels very like an Insignia in terms of ride and handling, no doubt tuned for European tastes, and there is decent steering feel. We can expect this to be even more refined when the full production model arrives. On our brief drive it felt quite potent, like a turbocharged petrol engine, just quieter, with lots of torque. Opel quotes a 0-100km/h time of nine seconds, which is likely to be faster than the Nissan LEAF - and the top speed is higher too, at 160km/h.

The Ampera officially goes on sale at the end of 2011, although it is more likely that the car will properly arrive on the market in Ireland at the start of 2012.

This was quite a brief drive in a car that is still a while away from being production ready, but first impressions are good. The Opel Ampera is likely to be an ideal solution for those who want to dip their toe into electric vehicle technology but don't want the stress of running out of charge and the restraints of being limited to a short distance.