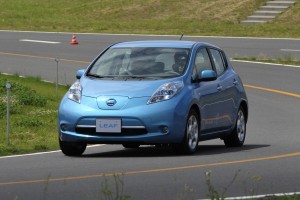 Nissan's electric LEAF is one of the most anticipated cars for some time and we are among the first in the world to drive a near production version.

The Nissan LEAF looks set to mark a change in the driving habits of a generation. This will be the first proper-sized, mass-produced electric family car and it is coming to Ireland in February 2011. It has been shown in concept form and some have even driven it around some cones in a car park, but we travelled to Japan to bring you an exclusive drive of a close-to-production version of the LEAF.

We are all quite accustomed by now to the design of the LEAF. It has been one of the best-publicised cars of the last few years since Nissan announced that it intended to be the first manufacturer to bring a proper, practical electric vehicle to the C-segment.

Set to take on the likes of the Volkswagen Golf and Toyota Prius, the LEAF looks less radical in the metal than some of the photos would suggest. And when you see photos of it in the standard colours that it will also be available in (such as silver, black and red), it looks even more discreet. Those prominent bulbous headlamps are there for a reason; they deflect air away from the wing mirrors to improve aerodynamics.

The LEAF is a decent size too. It will seat five in comfort and there is a proper boot. Passenger rear headroom in particular is impressive. Nissan didn't have to taper the roofline as harshly as Toyota does with the Prius or Honda with the Insight, instead using extensive under-body aerodynamics to reduce the car's wind resistance.

The interior is incredibly impressive. The gearstick is like a computer mouse and the centre console is dominated be a screen that shows key battery data, including maximum driving range, power output and regenerated electricity. An eco-indicator displays the status of electricity consumption, giving real-time feedback on the driver's efficiency. The displays are really easy to read and give good quality information without being distracting. The quality of the materials used is really impressive too, with good quality plastics and a nice finish to all the areas within your vision.

Up until now, we have only driven either mules of the LEAF a few yards or the prototype version around some cones in a car park. The purpose of our trip to Japan was to try a near production version and we did at Nissan's Grandrive facility. This test track was set out with three long straights and a series of sharp bends and we were given 30 minutes and several laps.

The first thing you do is switch it on and when you do there's a fanfare of sounds not unlike Windows starting up on your PC. Then you can select standard or Eco modes and you are away. Nissan has added a special sound at low speeds that is inaudible inside the car, but alerts those around you to the car moving off.

The first thing you notice is the torque. It is instant and pretty ferocious. Nissan wouldn't give us 0-100km/h figures just yet but it feels quicker than 10 seconds and because everything is so silent it is hard to judge how fast you are going.

Nissan had coned off the track in such a way as to make flinging the LEAF fast into a corner nigh on impossible, but we could carry enough speed in to tell that this is going to be a decent handler, bearing in mind that the car will be finely tuned for our own market before it goes on sale.

The steering has decent feedback and unlike some of the electric cars we have driven there was none of the harsh regenerative braking feel that makes you feel like the car will stop if you take your foot off the accelerator. The LEAF feels like a normal car to drive and one that anyone could get used to in a matter of seconds.

We didn't yet drive the car out on the open road, but this was the first chance to drive the LEAF at speed and through bends and we were genuinely impressed. It felt much better than we had anticipated.

Nissan says that the range of the LEAF is around 160 kilometres, but this varies when you use things like air conditioning or if you drive it hard on the motorway. Nissan admits it could drop as low as 77 kilometres in some cases. The car will charge in eight hours from a standard domestic charger or up to 80 percent in half an hour from a fast charger, several of which will be rolled out in Ireland over the coming months.

There will be just one version of the Nissan LEAF available in Ireland equipped with features such as 16-inch alloy wheels, fully automatic climate control, satellite navigation, cruise control, a rear parking camera and a quick-charge socket. Safety equipment such as driver, passenger, side and curtain airbags will be standard along with electronic stability control. Equipment will also include the very distinctive LED headlamps, which are a first for Nissan.

The LEAF will cost €29,995, which includes a €5,000 Government grant for the purchase of electric vehicles. Nissan estimates that the average running costs for a LEAF will be approximately €232 per year.

We were seriously impressed by our first proper drive in the LEAF. For anyone who lives in an area where the car's range limits are adequate they will be not only getting an amazing piece of 21st Century technology, but a really nice car too. This car is the real deal.