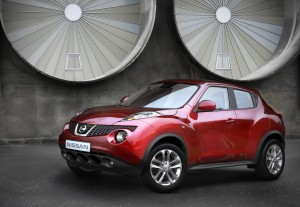 The success of the Nissan Qashqai is well-documented. It is credited with kick-starting the now highly lucrative crossover segment and Nissan admits that it was a lifeline at a time when several of its top sellers were due to expire. To this day there are long waiting lists for the Qashqai, despite the arrival of several new competitors. Nissan wants to repeat all that, but at a lower price point. Enter the Juke.

Without doubt, the biggest talking point about the Juke is its exterior styling. It was previewed by the beefy Qazana concept and much of the flavour of the show car has made it through to production. It's more opinion-splitting than the Qashqai though: we suspect as many people will dislike as will love its distinctive shape.

The interior is less controversial. It's spacious too, noticeably more so than the MINI, Audi A1 and Ford Fiesta that Nissan reckons the Juke competes against. It gets the basics right, though we're not yet convinced by the various driving mode options and the centre console that's apparently modelled after the fuel tank on a motorbike.

As both the 1.6-litre petrol engine and the 1.5-litre turbodiesel sit in Band B in terms of emissions and taxation, Nissan can offer the former for less. The diesel models attract a €2,000 premium.

Four-wheel drive is offered under special order only, while the CVT automatic costs an additional €2,900.

That all-important commanding driving position is present and correct, so the Juke immediately feels bigger than its rivals. However, on the road it proves quite agile and is keen to corner. The suspension is tauter than in the most comfortable of superminis, but in return there's not too much body roll. It doesn't engage in the same way the MINI and Fiesta do, but first impressions suggest that it's still quite good to drive.

The steering and brakes are well-weighted and easy to modulate, though the five-speed manual gearbox in the example we drove seemed a little recalcitrant. Nissan's gearboxes are usually quite slick so we suspect this could be due to the low mileage on the test car.

This might also explain the lack of sparkle from the engine. We drove the 1.6-litre petrol model, which is expected to be the biggest seller. It performs acceptably, but it needs to be wrung out to extract its full performance (117hp maximum) and the engine sounds a little raucous when extended. It lacks the low-down urge we've grown used to from the proliferation of turbodiesel power. A small capacity turbocharged petrol engine would be better suited to the car and previous experience suggests that the 1.5-litre, 110hp turbodiesel will be a better bet - despite the fact that it's more expensive.

Nissan will apparently invent another niche within a niche early next year when it launches the 1.6 DIGT Sport version of the Juke. This is powered by a new 1.6-litre turbocharged, direct-injection petrol engine, with 190hp. So that's a hot crossover hatch to take on the likes of the new MINI Countryman Cooper S. Should be interesting.

Nissan hit the nail on the head with its Qashqai. We'll shy away from predicting whether or not the same can be done with the supermini segment. We love the unique appeal of the Juke and it's bound to attract a bunch of potential MINI buyers into Nissan showrooms. Our short first drive suggests it's not as fun to drive as some rivals, but it is much more practical. It's on sale now.