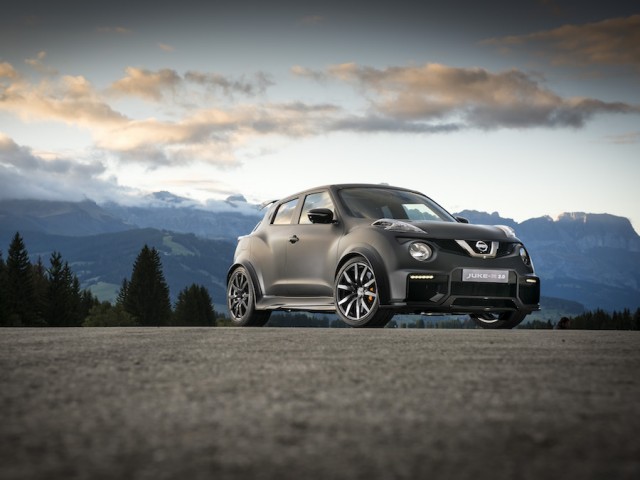 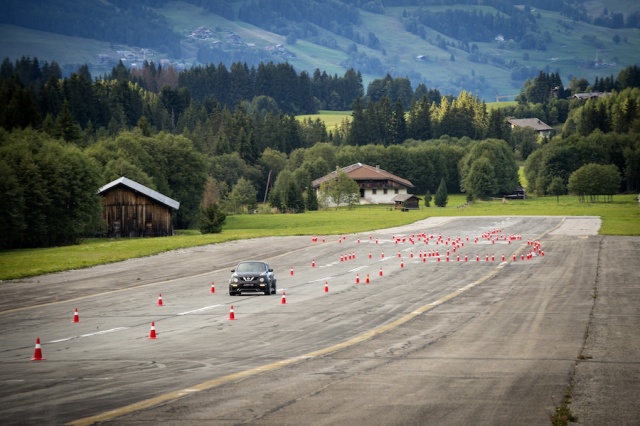 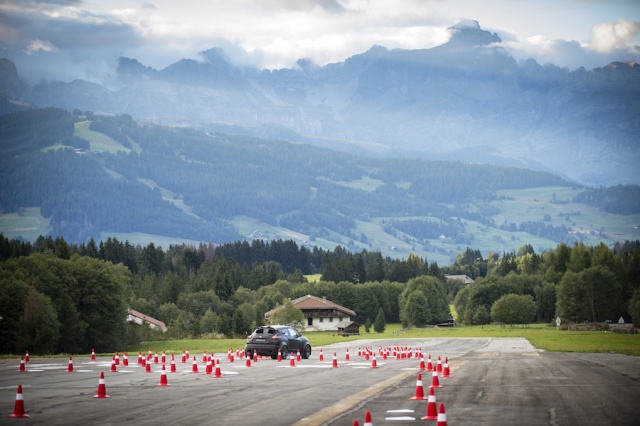 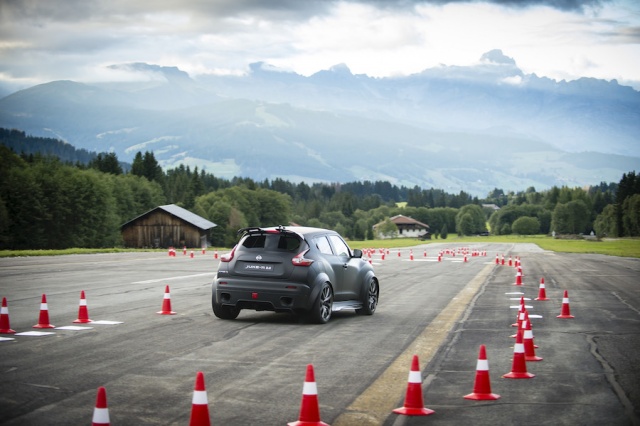 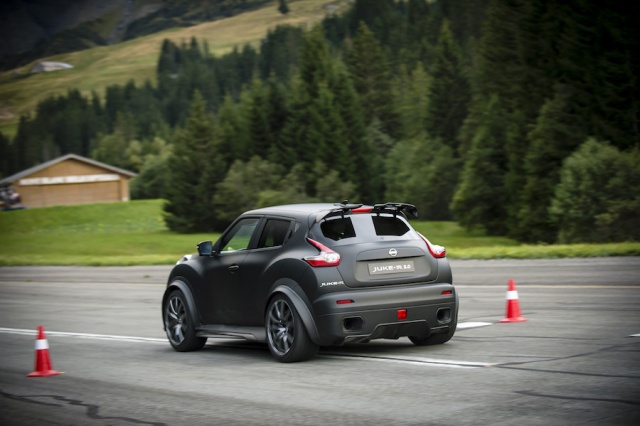 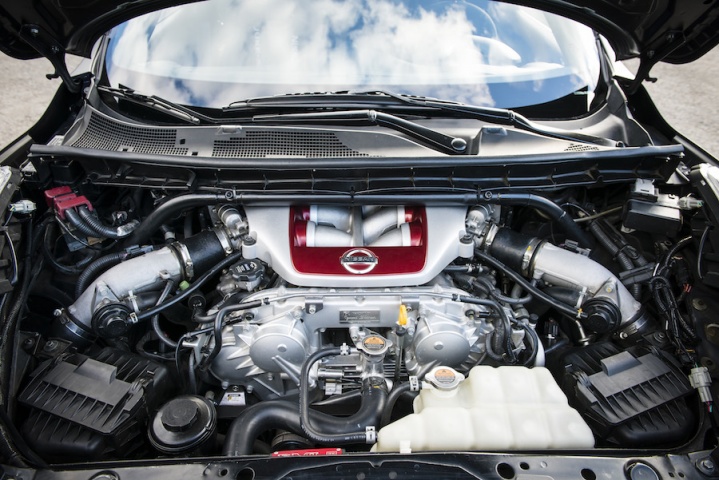 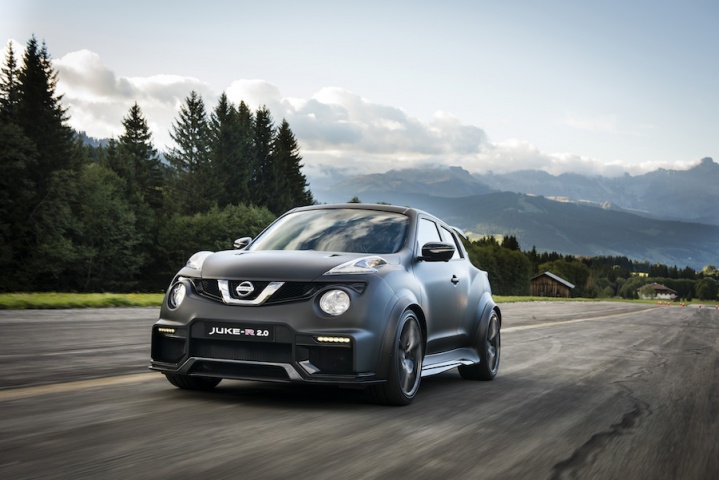 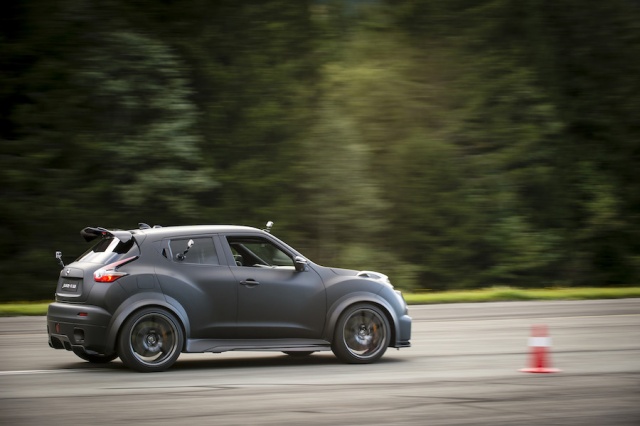 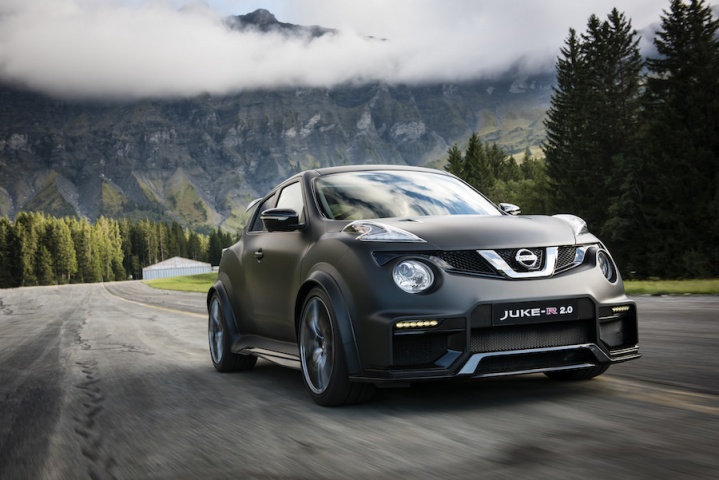 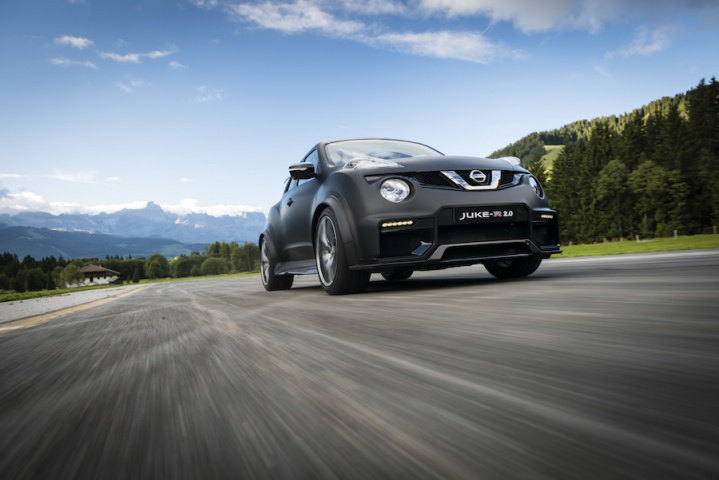 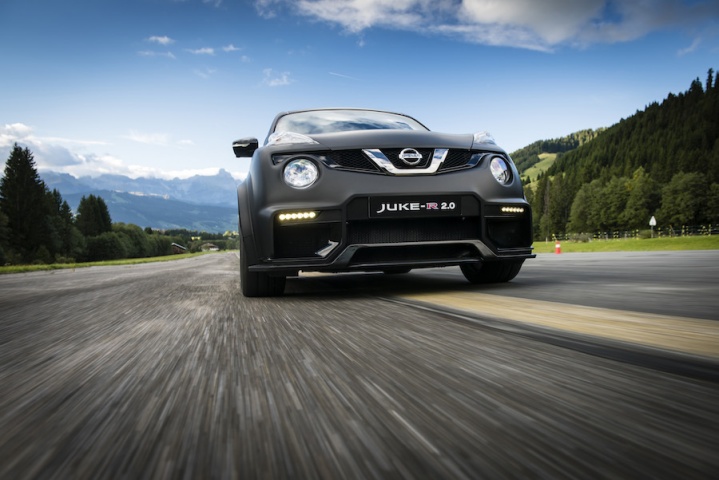 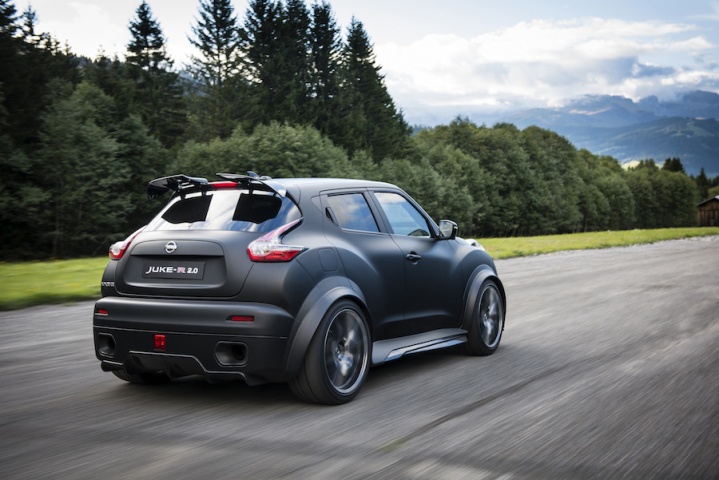 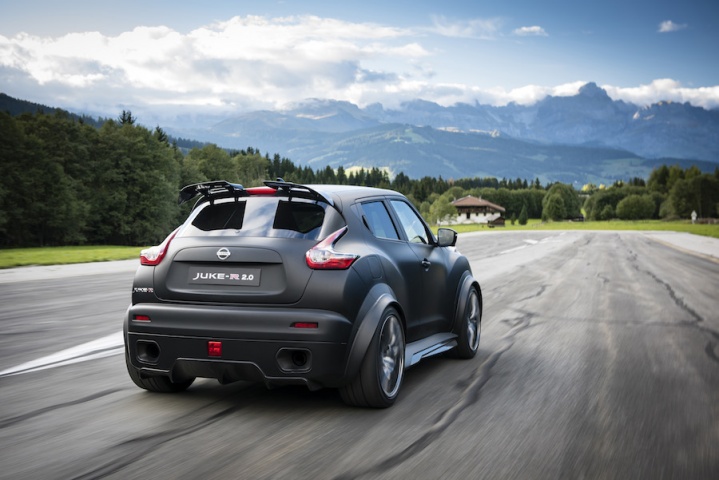 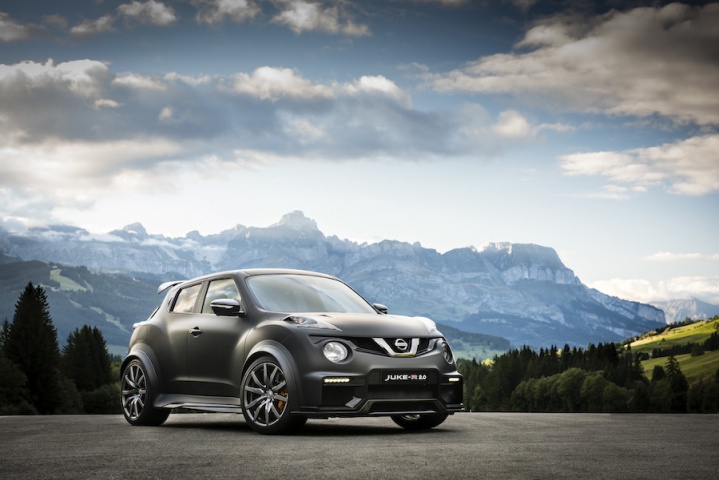 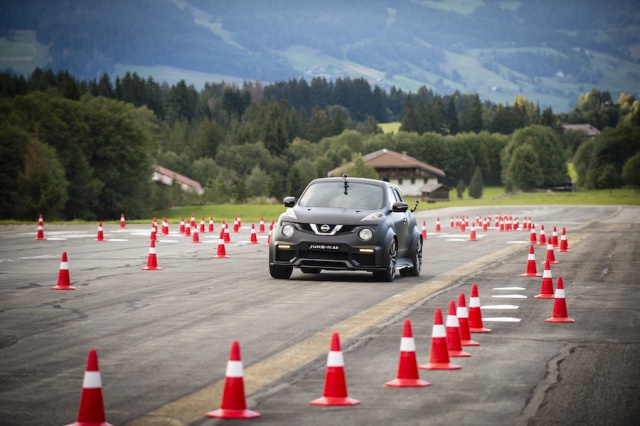 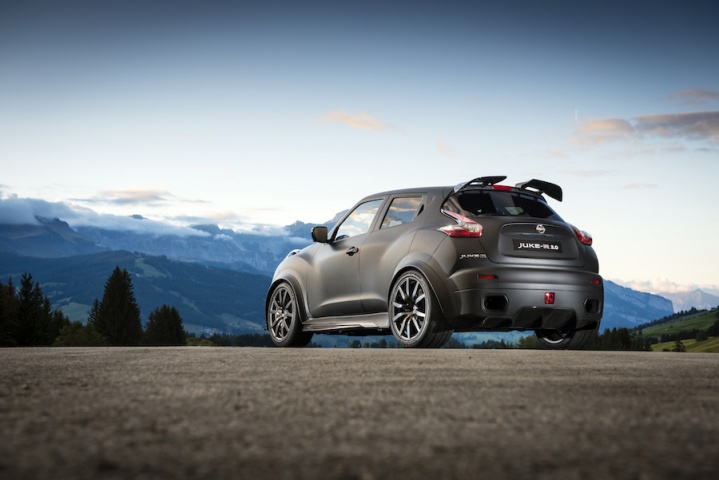 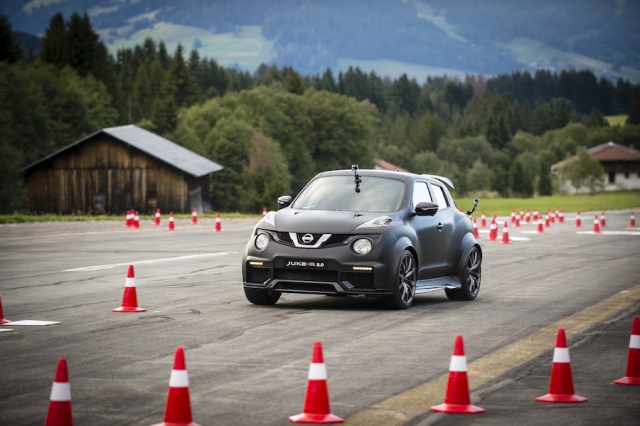 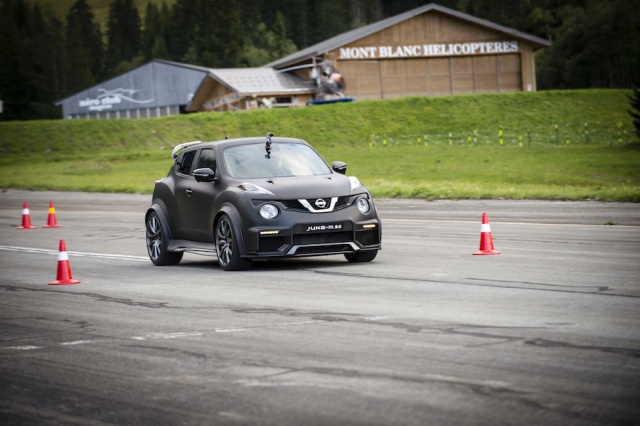 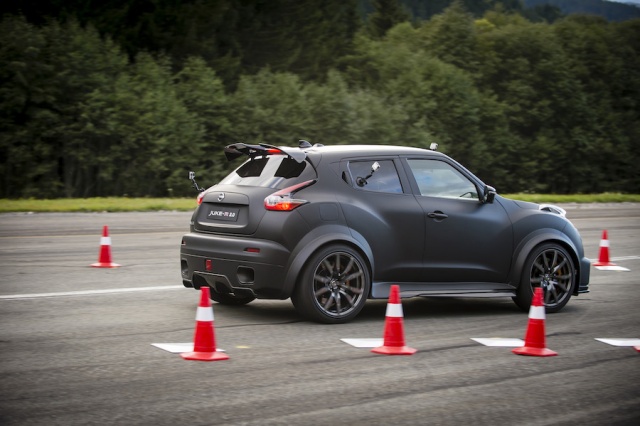 A 600hp Nissan Juke should be a thing that doesn't exist. But exist it does...

The depths of madness so often flirt with the fringes of the sublime. Gaze, longingly, at Vincent Van Gogh's canvases daubed with starry nights or fields of vases of sunflowers, or Edvard Munch's haunting The Scream and you start to see just how gossamer thin the line is between madness and artistry. Could Van Gogh have seen those colours, or the swirls of the stars, had not his mind been so afflicted with whatever demons assailed him? Doubtful.

I'm not sure what demons assailed the Nissan team that came up with the Juke-R, but they're nasty ones. Probably with big teeth and grasping claws, hence the imperative for speed. Or maybe they just suffered a collective blow to the head, but whatever triggered the fever dream that lead to someone saying "you know what the world needs? A compact crossover with 600hp. That's what" we should all be grateful that the madness descended. Nissan may be a corporate monolith, a complex entity designed to turn metal, glass and plastic into cash and dividends, but as big companies go, it's delightfully prone to bouts of corporate madness.

How else would you explain the evolution of the GT-R (neé Skyline) from mildly warmed over saloon to a twin-turbo, four-wheel drive monster of global race circuits, a car with pure nitrogen in its tyres and a habit of giving Porsches and their drivers a dose of cold sweats? To drive a GT-R is to delve into a narrow fissure of the universe where the sort of mid-seventies, rear-drive, hairy-arsed oversteer and thumping performance you crave meets the 21st century computing power and electronic wizardry that allows it all to happen in relative safety. A GT-R is a reminder that cars can be great without being, technically, supercars, and that a company that primarily makes family-friendly Qashqais can walk the high-performance walk, when the mood takes.

Of course, a GT-R isn't all that practical, and at least some of the people in its development team must have families, so perhaps that's where the idea of the Juke-R came from. Originally designed as a concept car for the Dubai Motor Show (because if you're going to show off a ridiculous idea, show it off in a place where credit is liquid...), the Juke-R took a GT-R chassis and its wondrous 3.8-litre twin-turbo V6 engine and cut and shut both it and the body of a Juke crossover until the two met in the middle. Yup, four-wheel drive, semi-auto gearbox, launch control and all. It was daft. It was a flight of automotive fancy. It was an instant hit and the deposits rolled in.

Darren Cox, Nissan's Director, Global Motorsports, explained: "People loved the Juke-R in Dubai - we were receiving offers for the original concept on the street. We couldn't disappoint such dedicated fans, so with three genuine offers on the table we made the commitment to build a limited run of Juke-Rs."

Famed British racing team Ray Mallock Racing (which had previously taken Nissan to motorsports glory in the British Touring Car Championship) set about transforming the concept into a viable road car. The first production version was more powerful than the concept, producing 545hp from its 3.8-litre twin-turbo V6 engine. During early tests, the first-generation Juke-R was able to reach 100km/h in just 3.0 seconds from rest and had a maximum speed of over 265km/h.

Nuts, but people lapped it up, and now in its fifth year of production, Nissan has created this, the Juke-R 2.0, now replete with the 600hp engine from the GT-R Nismo. There's also an all-new carbon fibre front bumper that includes air intakes increased in size by more than 100 per cent to cope with the additional cooling demands of the engine. Other updates include a new one-piece carbon fibre rear bumper that incorporates a new diffuser for improved aerodynamics and special high temperature carbon exhaust cowlings. The bonnet (with larger air ducts) and side sills are also made from carbon fibre and finished in matt black, while the tailgate features new carbon winglets to further smooth airflow and aid downforce.

And they've just let me strap into it...

It's painted matte-black and the extra muscle mass added to the Juke's oft-controversial shape makes it inestimably more appealing, as do the massive, hulking alloy wheels. To be honest, I'm not sure quite how much of the extra visual appeal comes from the knowledge of what lies beneath.

Inside, it's pretty much stock Juke bar a couple of items. There's a roll-cage to clamber across (thankfully not a full race-spec cage or your correspondent fears that his corpulent backside may have become wedged in there...) and some big, bucket seats. Plus a four-point safety harness in place of the normal seatbelt and the central infotainment screen now contains the torque, turbo and g-meter layout from the GT-R. The Juke's standard gear lever has also been ditched in favour of the GT-R's dogleg selector for its dual-clutch automatic gearbox. It feels incredibly satisfying to click it back into position, rather like pulling back the breech of some monstrous artillery gun. Which seems rather appropriate given the weapons-grade performance we're about to unleash.

Now, Nissan hasn't released official performance figures for the Juke-R 2.0 as yet, but its predecessor was able to ripple off a three-second 0-100km/h time, and that was with 545hp. With an extra 55hp? Who knows, probably 2.8 seconds if you really let it rip, but we're not allowed to do that today. Fearful for the life of the transmission in this prototype, we're off to a gentle rolling start, only allowed to unleash all the beans once past a line of marker cones.

And then... Actually, performance builds pretty steadily, so steadily that I suspect Nissan has restricted the torque delivery in the lower gears so that the drive shafts don't tear themselves to bits every time. It doesn't feel slow, quite, but it's more of a steady build up than a kick up the arse. But it builds. And builds. And builds. And builds until the point where you fear that the runway of the airfield we're testing it on, something that usually feels endlessly long in any road car, is way, waaaaay to short. As the Juke-R fires through its gears, and the power and torque just keep coming, it feels exactly like taking off in an overpowered jet aircraft - you go from slow to quick to fast to really fast to bloody-hell-someone's-lit-the-afterburners. If the Juke-R had wings, I feel I would have been filing this report from 20,000 feet over the Swiss Alps.

A quick lean on the brake pedal though has the Juke set up nicely for a quick chicane and then, just as I'm about to give it some flat-footed action again, we suddenly slow and come almost to a stop. Have I broken it? Has a floor mat jammed the brake pedal? No, the helpful Nissan instructor, sitting next to me, has a driving-tester-style brake pedal of his own and he's slowed us down, fearful that I was about to unleash 600-hell-horses and take us off the end of the runway. Happy that I'm not a lunatic and I'm not going to lunch Nissan's precious prototype, he takes off the training wheels and we're off again. Accelerate, feel the thrust, brake, flick the chicane, accelerate again and we're back at the apron behind the runway, all finished.

The Juke-R is a seriously fun bit of engineering, and a timely reminder that Nissan can make pretty much any car it chooses, from the staid Pulsar to the sensible Qashqai all the way up to comedy material like this. It's not just for fun though - stuffing the GT-R's powertrain into a Juke is Nissan's way of preparing us for a future of high-performance crossovers, which it has now become clear is the future of the classic Z sports car badge. The Gripz concept shown recently in Frankfurt was a clearer indication of what's coming down the pipe - a sort of working class Porsche Cayenne Turbo if you like. Performance with practicality.

Hopefully, Cayenne-like, profits from such ventures will allow Nissan to keep making the cars we really love - the GT-R itself and an eventual replacement for the 370Z (which I, for one, hopes will ditch the big V6 in favour of a high-revving 1.6 turbo petrol to take the Z badge back to its simple and affordable roots). If the Juke-R is a bit of motoring madness, then at least it's madness with a method.